You’ve visited the parks. You’ve ridden the rides. You’ve seen the attractions. You may have even read up on some Disney lore. But there’s a lot that goes into running the Walt Disney theme parks that the guests don’t necessarily know about. The history of the parks, too, have quite a few interesting surprises.

There are the facts everybody knows – like how all of the attractions broke down the first day Disneyland opened in California. But then there’s the offbeat stuff the guidebooks don’t tell you – like how the Pirates of the Caribbean ride originally used real human bones. Read on to discover more little-known facts about Disney parks. 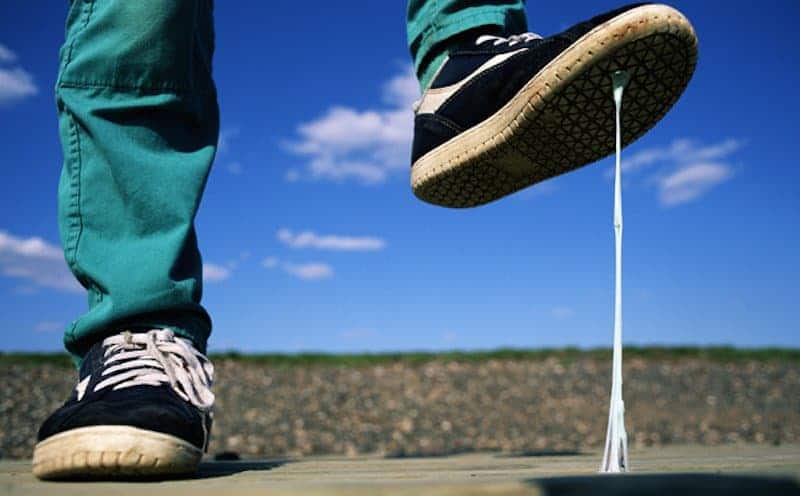 None of the shops in Walt Disney World sell chewing gum. Apparently, cleaning all the gum from the sidewalks got to be such a hassle, the parks banned gum completely to curtail the problem. It still ends up on the sidewalks from time to time, but only because some visitors decide to bring their own. 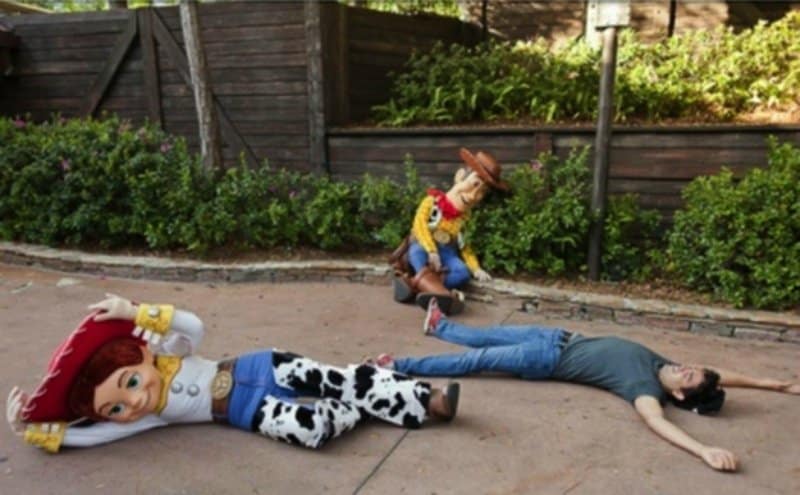 Until recently, Toy Story characters used to go limp and drop to the ground when a guest would shout “Andy is coming!” The practice, which was an homage to the Toy Story films, has been discontinued for safety reasons.

Worst Yard in the Neighborhood 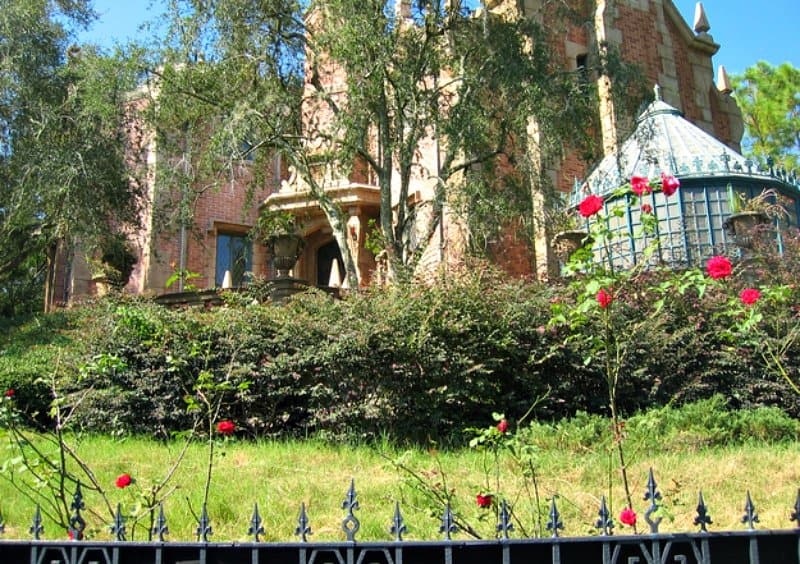 The lawns at Disney parks are meticulously maintained, but the yard in front of the Haunted Mansion ride is left to grow wild to fit the spooky theme of the attraction. 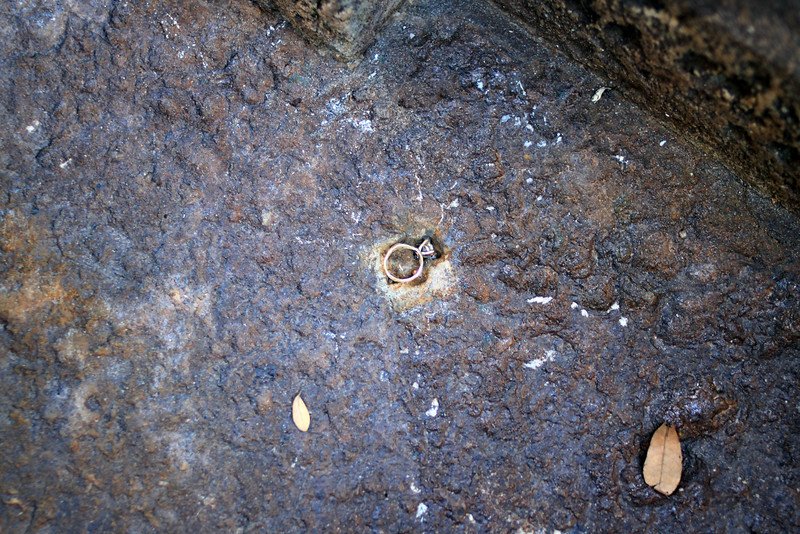 Speaking of the Haunted Mansion, look around the ground for a wedding ring embedded in the concrete. It’s a spooky allusion to the “hanging bride” character from the ride.

Real Bones at Pirates of the Caribbean 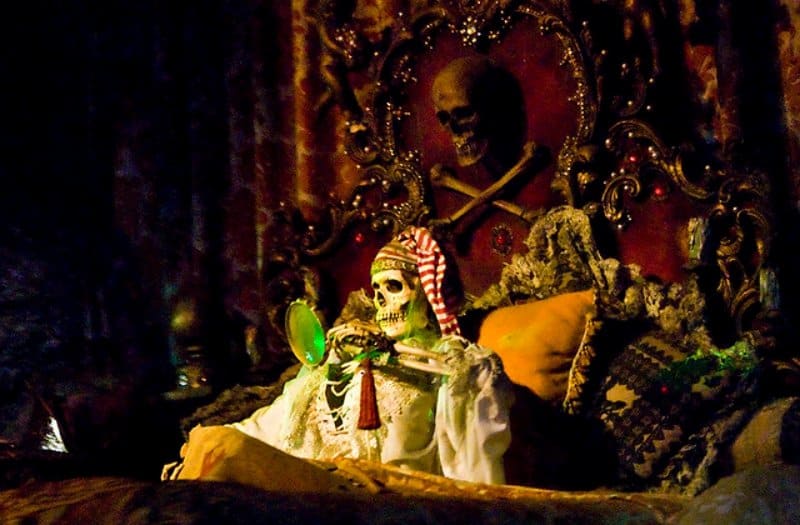 Disney lore says the imagineers used real human bones for the Pirates of the Carribbean ride when it first opened in 1967. By now, all but one set of them have been replaced with synthetic props.

The skull and cross bones above the “magnifying glass” skeleton are reportedly the only real bones left in the attraction.

Blast From the Past 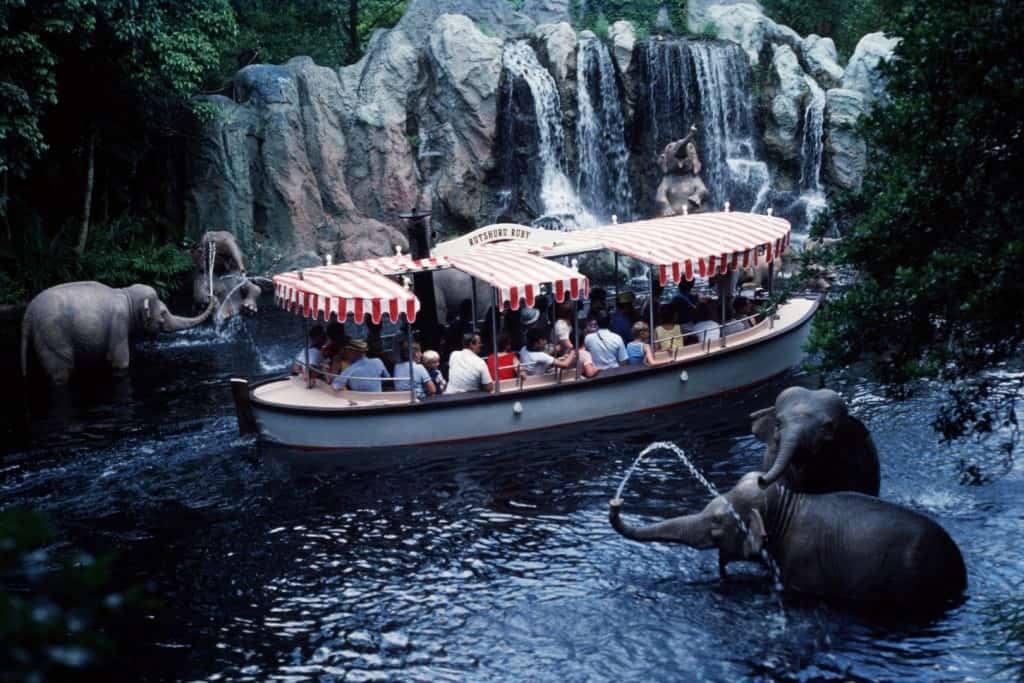 Fourteen of the twenty-three opening day attractions at Magic Kingdom are still running, including the Jungle Cruise, The Hall of Presidents, It’s a Small World, and the Haunted Mansion. 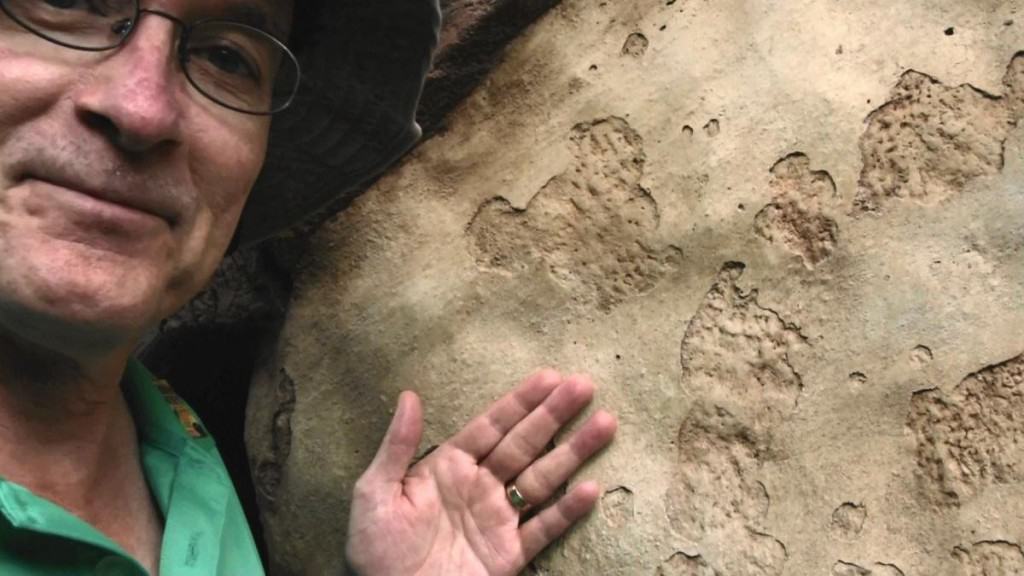 Throughout the parks, there are thousands of hidden Mickey Mouse heads subtly inserted into the designs of rides, attractions, and other locations. These so-called “hidden Mickeys” are placed there by Disney artists and imagineers, and some visitors spend their entire trip to the park seeking them out. 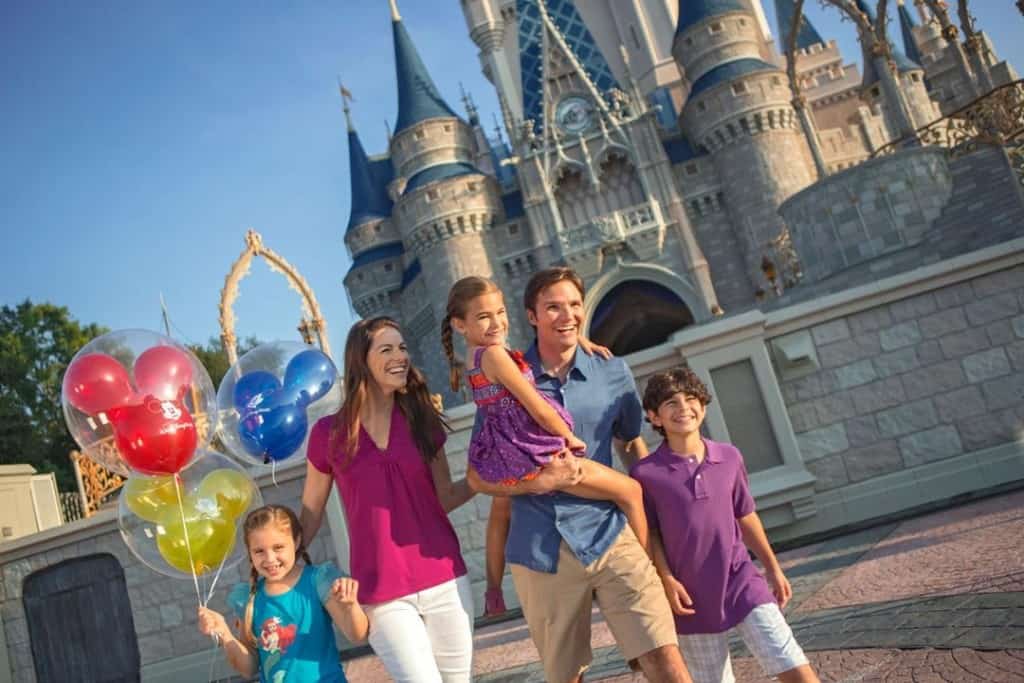 Ever noticed the scent of baking cookies around Main Street? Or the salty sea air in the Pirates of the Caribbean line? All throughout the parks, devices called “Smellitizers” pump out odors to add an extra sense of realism to the atmosphere. 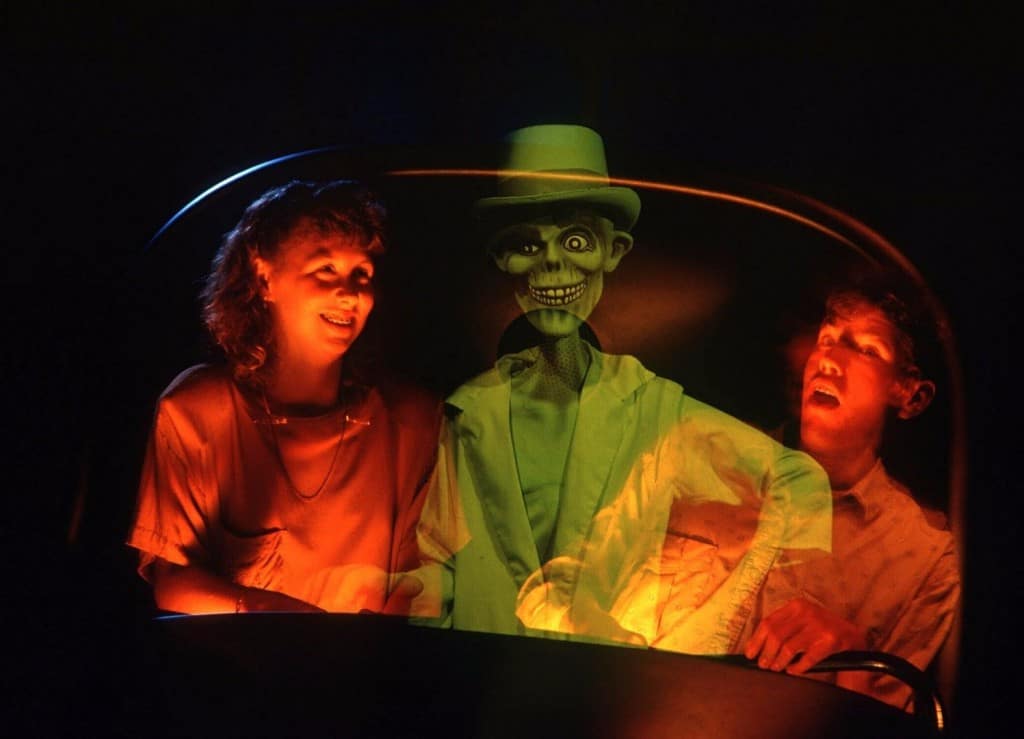 Every year, people attempt to spread the ashes of deceased friends or relatives on Disney rides. Despite the fact that it’s illegal, many people’s final wishes apparently involve having their ashes scattered somewhere in a Disney park.

There When You Need It 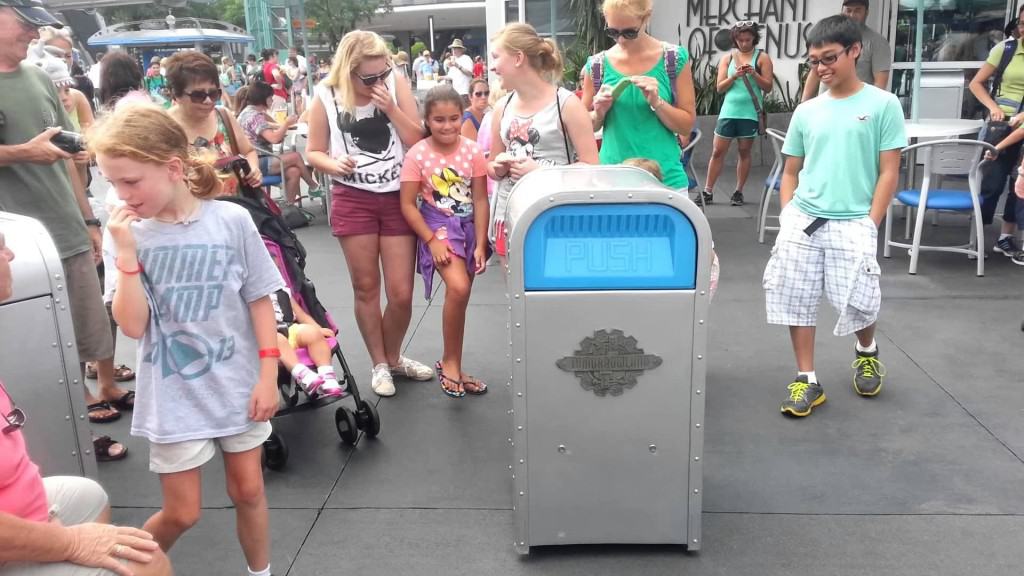 Wherever you are in a Disney park, a trash receptacle is never more than thirty steps away. This helps maintain the remarkable cleanliness of the parks.

According to legend, Walt Disney himself visited other theme parks and observed how long people held on to trash before throwing it on the ground. Apparently, it was about thirty steps or so.

What Was the Name of His Other Leg? 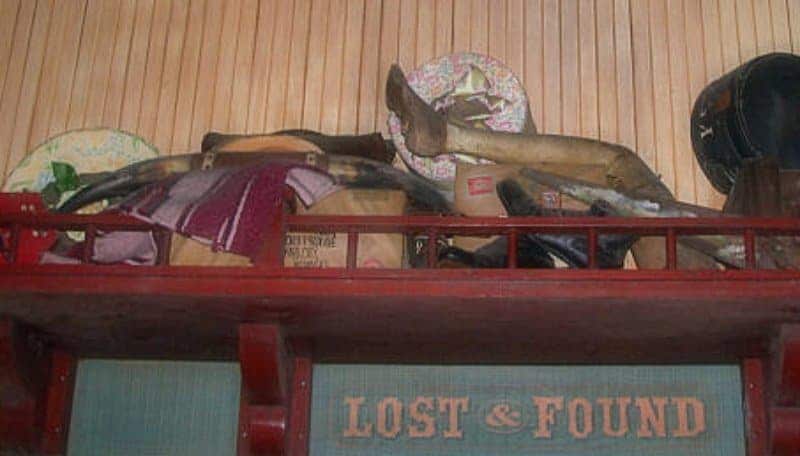 Look closely in the Frontier Land general store and you’ll find an homage to a classic scene from Mary Poppins – a wooden leg labeled “Smith”.

The joke from the film goes:

“I once knew a man with a wooden leg named Smith.“

“What was the name of his other leg?“

The British Are Coming! 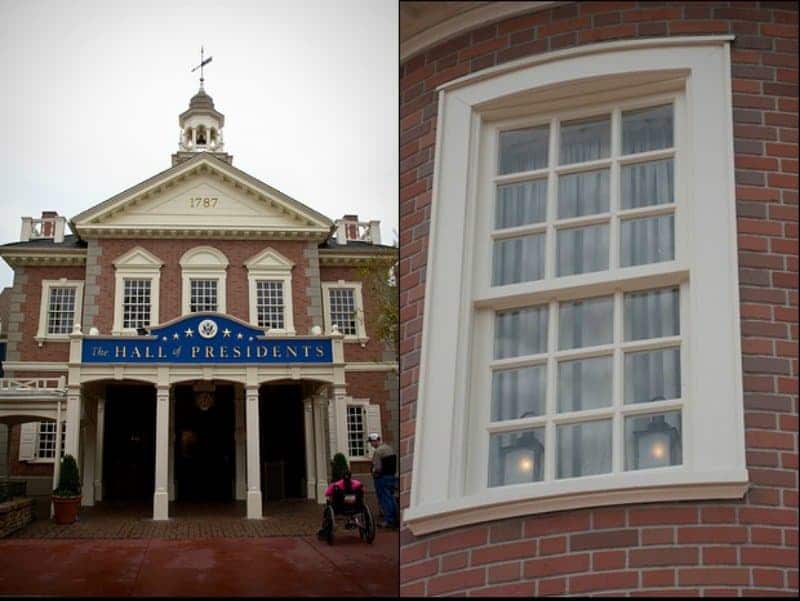 Look closely at the second-story window of the Hall of Presidents and you’ll see two lanterns, a reference to the famous “One if by land, two if by sea” line from Henry Wadsworth Longfellow’s classic poem “Paul Revere’s Ride.” 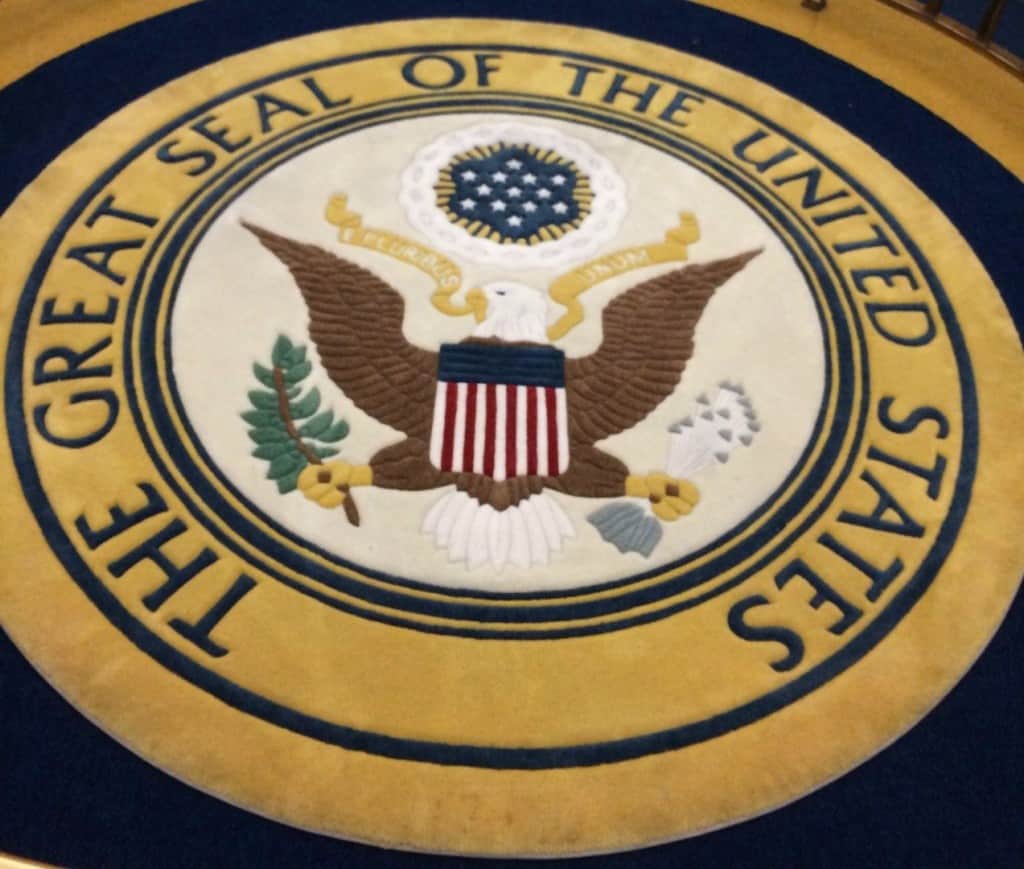 There are only three official presidential seals in the United States: one in the Oval Office, one at the Liberty Bell, and one in the Hall of Presidents at Disneyland. 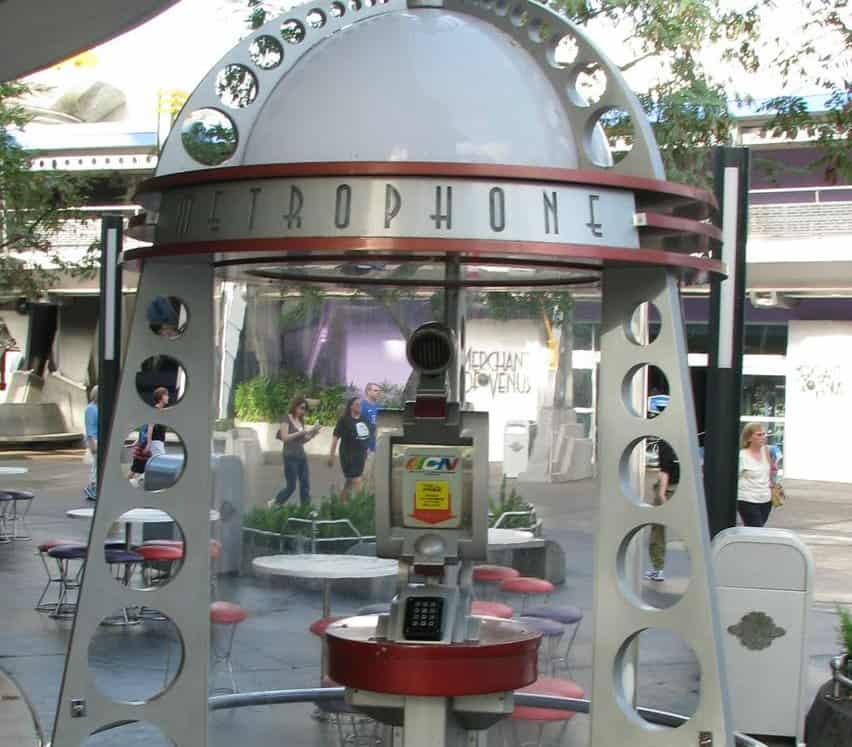 Those telephone booths you see in Tomorrowland are actually a little easter egg called the Galactic Communication Network. The “phones” play messages from around the galaxy.

Some of the things you’ll hear include:

“Earth’s Crust Pizza! We deliver anywhere in the solar system in less than two lightyears or your order is free. Can you hold please? Thanks for holding. I had to take that incoming call from Saturn, because they hardly ever give us a ring!“

“Hiya, babe, it’s your agent, Johnny Jupitor. You called? Anyway, I gotta call you right back. I’m in a meeting with my number one client— er, I mean, my number TWO client, Sonny Eclipse. You’re always number one in my book, baby. You know that. Let’s do lunch! Oooh, look at the time! Gotta fly!“

“This is Tomorrowland News Networks Corona Borealis with your local time and weather. As always, it’s going to be a great, big, beautiful tomorrow, and at the tone, the time will be now.”

The World of Tomorrow 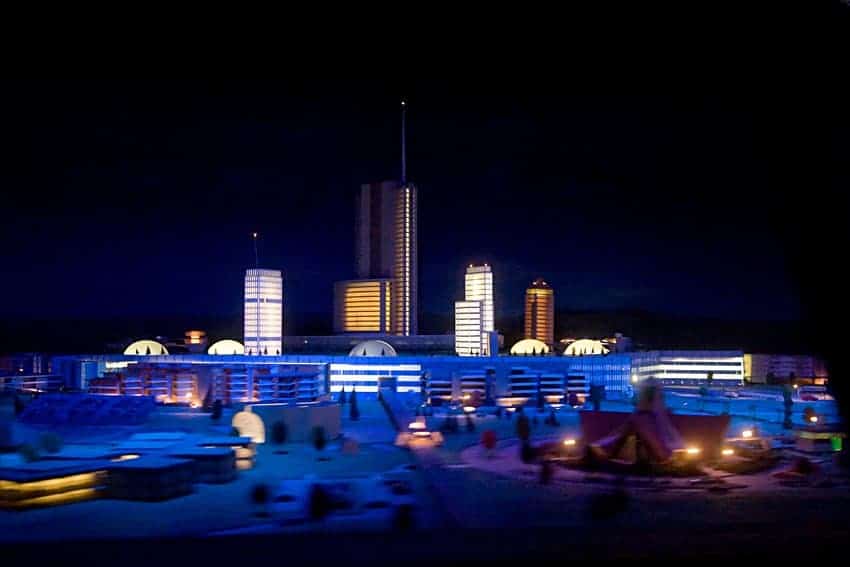 Before his death, Walt Disney originally designed Epcot to be a model futuristic community home to 20,000 residents. You can see the original scale-model of the planned city in one of the darkened tunnels on the People Mover ride. 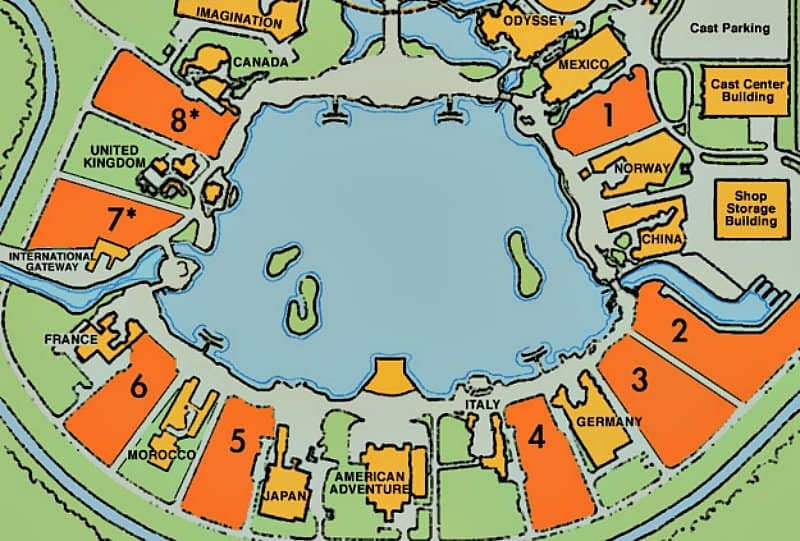 When imagineers built the World Showcase attraction at Epcot, they left room for eight additional countries. Some cancelled building plans include Israel, “Equatorial Africa”, and Spain.

There are no current plans to expand the attraction, but there’s room to grow if Disney decides to add more countries.

Down the River Rhine 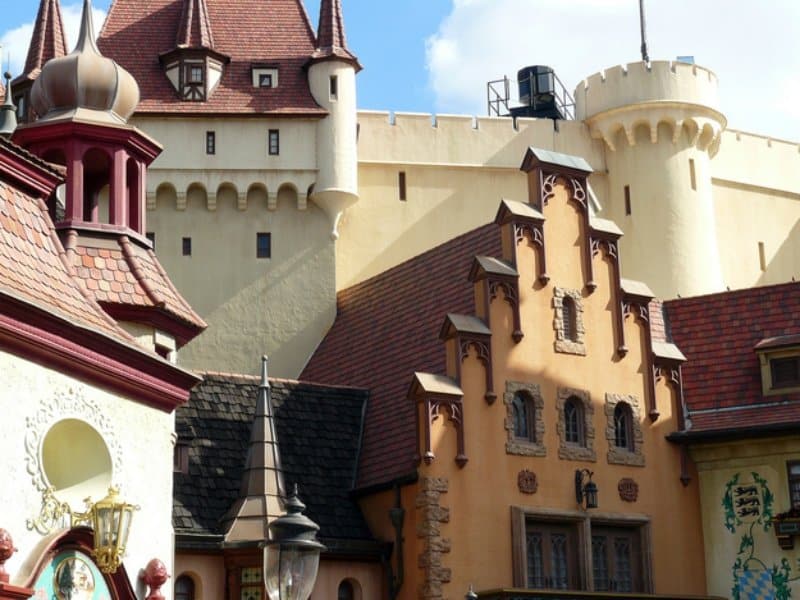 Speaking of cancelled plans, the huge castle structure behind the German pavilion at the World Showcase was built to house a flume ride that simulated a trip down Germany’s Rhine River. The plans never came to fruition, however, and the building remains dormant. 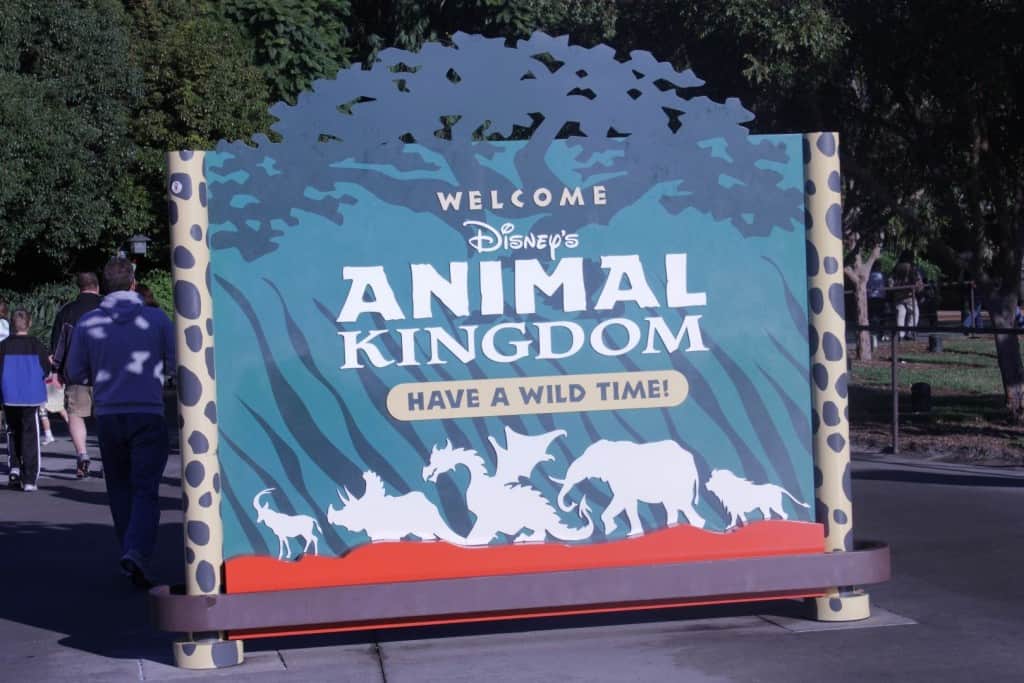 Evidence of yet another scrapped idea can be seen in the welcome sign at Animal Kingdom. Look closely, and you’ll notice a dragon among the animal silhouettes. It was put there to represent a now cancelled section of the park called “Beastly Kingdom”, which was to be dedicated entirely to mythical animals. 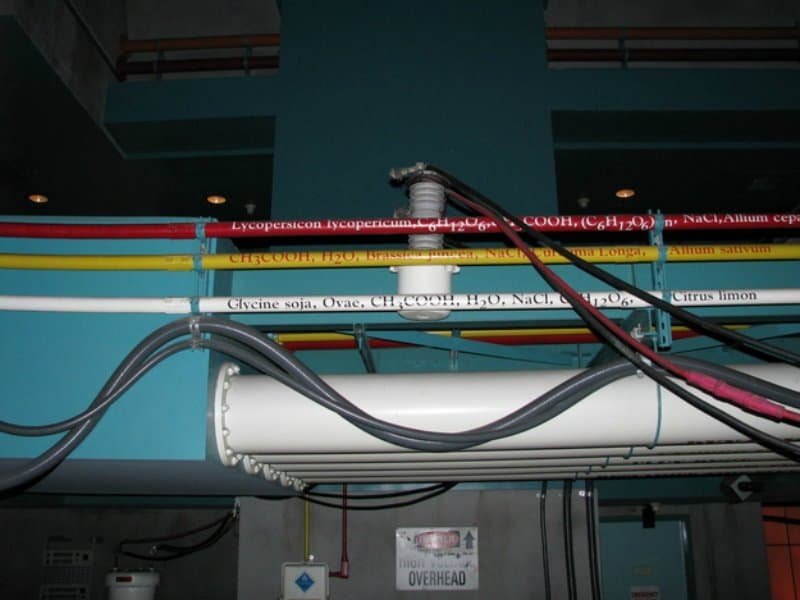 The line for the Dinosaur ride at Animal Kingdom is full of all sorts of science-y gadgets and gizmos, including these three pipes with chemical formulas written on them.

What are those formulas for? Ketchup, mustard, and mayonnaise, respectively. 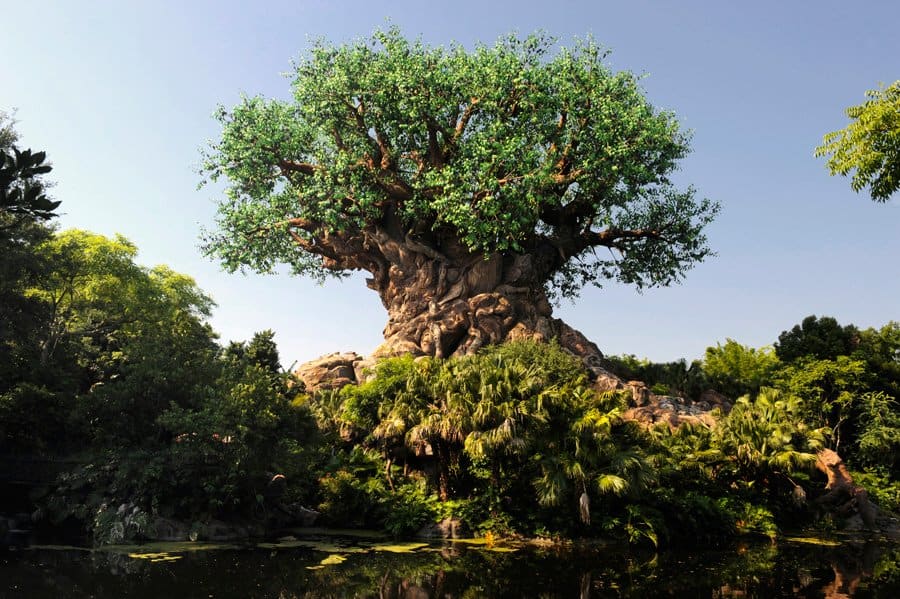 The gargantuan Tree of Life structure that defines the Animal Kingdom skyline was created by re-purposing an old oil rig.

Bonus fact: There is a Hidden Mickey placed somewhere amongst the hundreds of faces, animals, and objects “carved” into the base of the structure.