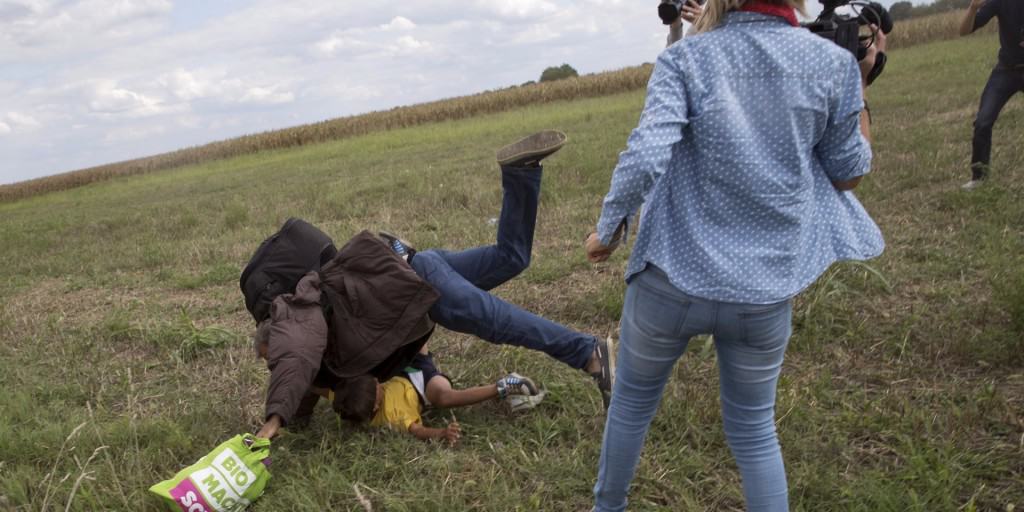 In what can only be described as horrifying and abhorrent behavior, a Hungarian camerawoman, Petra Laszlo, a who worked for N1TV, has been caught on film attempting to kick and trip fleeing refugees.

Laszlo was fired from her job at N1TV as soon as the footage broke and has now issued a public apology for her actions. She wrote a letter to a Hungarian newspaper Magyar Nemzet: “I panicked. I’m not a heartless, child-kicking racist camera-person. As I watch the footage now, it’s like I’m not watching myself. I honestly regret what I have done and take responsibility for it“.

Laszlo was thoroughly questioned by the police for her actions and was later released, although investigations are still underway. The camerawoman claims that she felt as if she was being attacked by the mob and lost control of the moment. She elaborated in her apology saying “I was afraid as they were rushing toward me and then something snapped in my head. As I had my camera in my hand I couldn’t see who was coming at me, my only thought was that I was going to be attacked, and that I had to defend myself. It’s not easy to make a good decision when you’re in a panic. I’m just a woman, now unemployed mother of small children, who made a bad decision in a panic situation“.

Although it is unclear if her motives were indeed from a place of panic, her actions were inexcusable and she seems to be facing the full fallout because of it.