20 Baby Shower Cakes That Will Haunt Your Dreams

There are plenty rites of passage in life like going to prom, having your first drink, and getting married. But none of those are as impactful as having a child – a little bundle of joy to call your very own. It’s a wonderful thing and well worth celebrating, but sometimes that celebratory intention can be misguided to say the least. Here are just a few baby shower cakes with bizarre, creepy, and completely absent senses of humor. 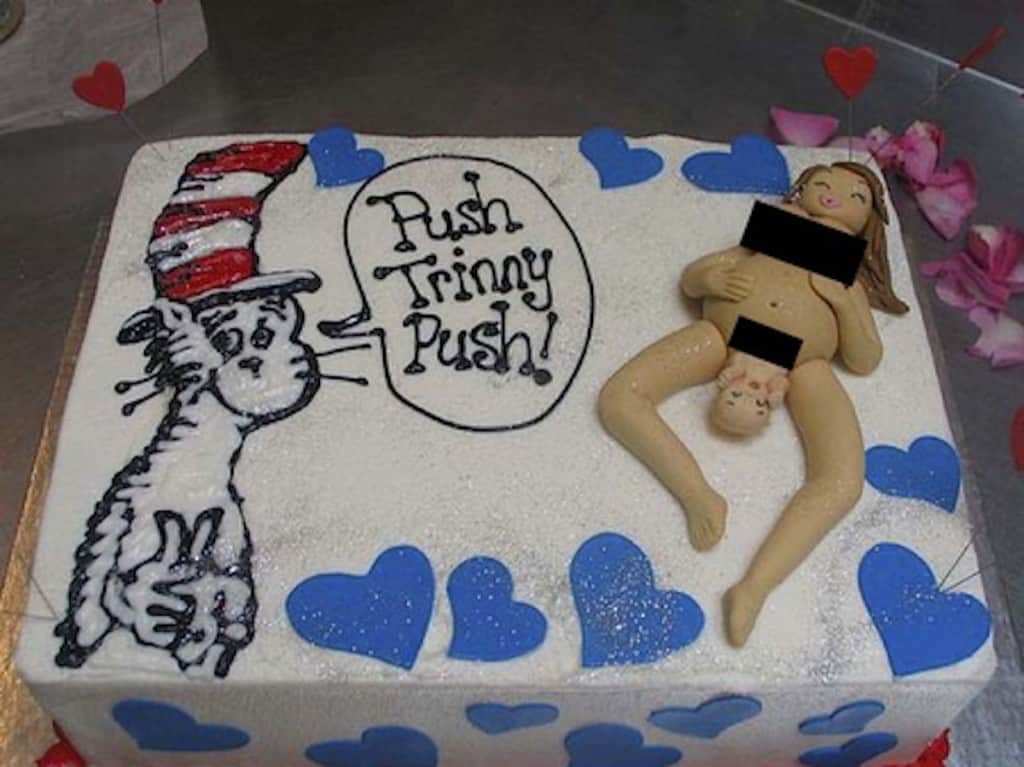 Once the child is born, the Cat in the Hat definitely belongs in its life. But until then, he should probably stay on the bookshelf and out of the delivery room. 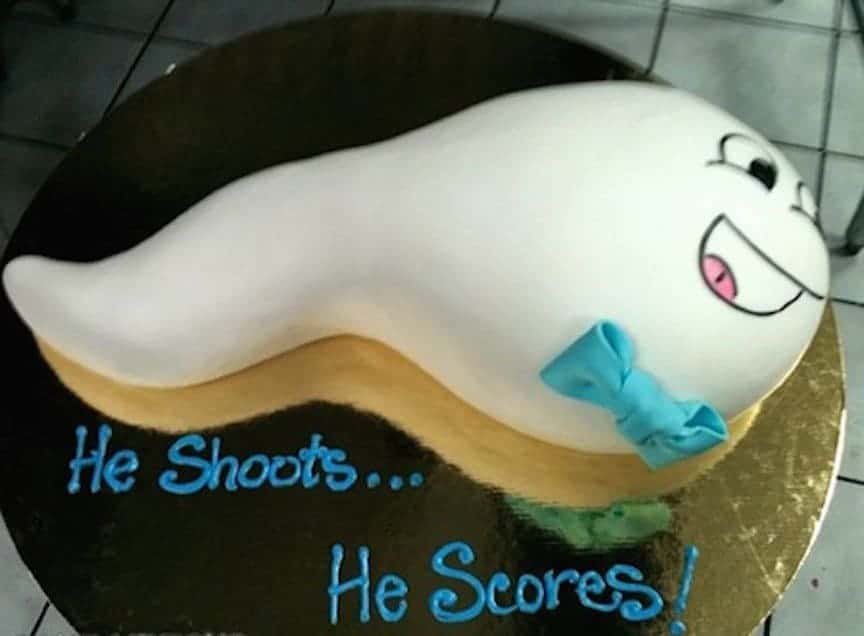 If you’re having a baby, you already know how the whole baby-making process works. But apparently, a man with a wily sense of humor thinks baby shower attendees need a reminder.

There Will Be Blood 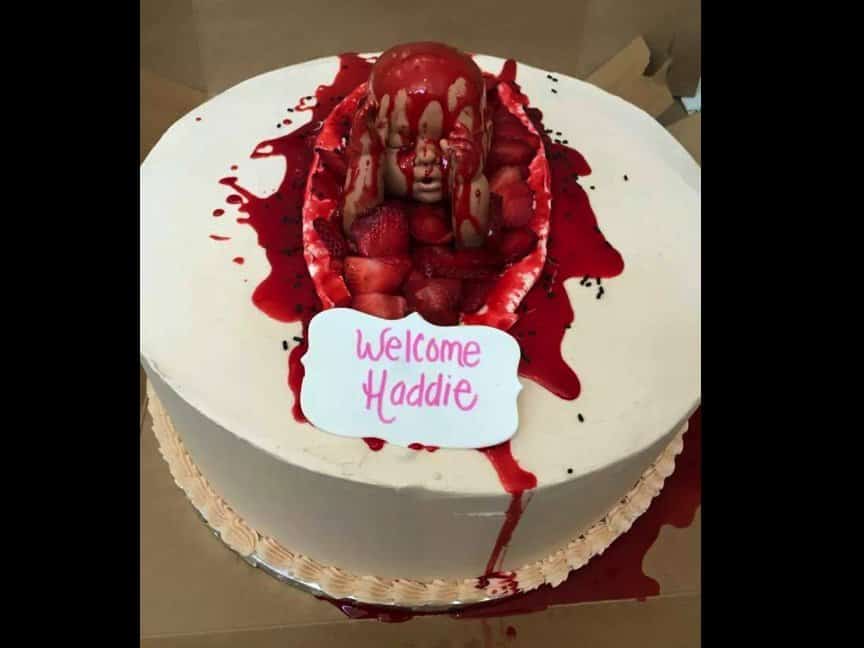 Most people like to play silly little games and give gifts like diaper bags and onesies at their baby showers. Other people, it seems, like to bask in the more gruesome aspects of childbirth. 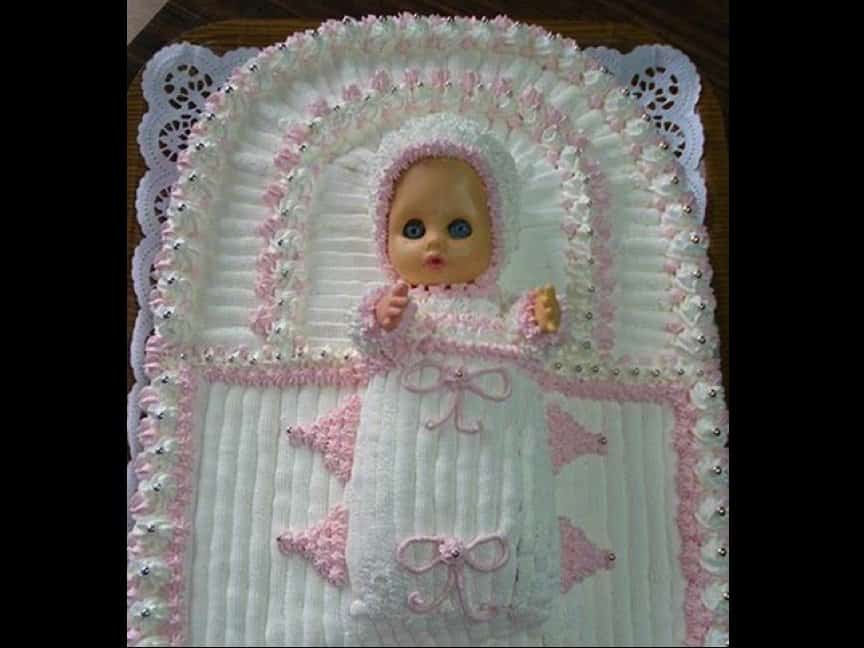 When you take a good look at this cake, you can kind of see that it could have been a pleasant looking party treat. But then you see the baby doll version of one of those demon kids from Village of the Damned and you’re instantly put off your appetite. 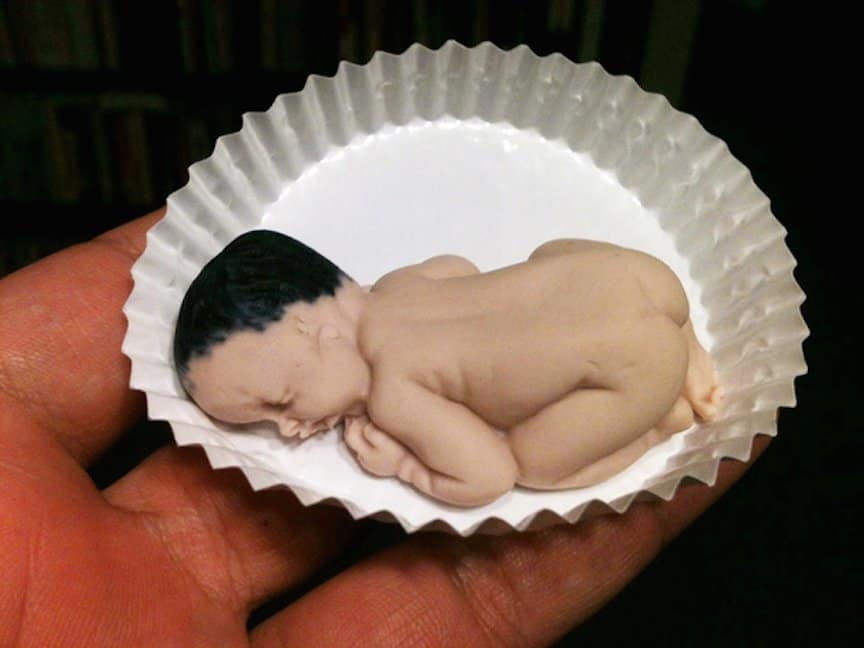 It used to be that eating babies was something left up to ghoulish monsters. Now it seems that rich people who have the cash to spend on anatomically correct desserts can eat them too. 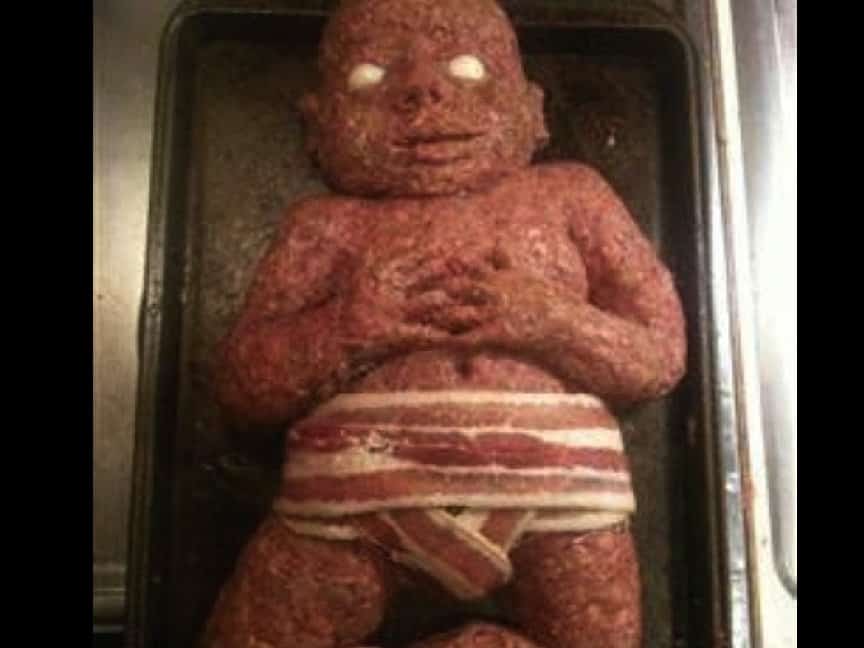 Just because it’s a cake doesn’t mean it has to be sweet. Then again, that doesn’t condone the making or consumption of baby-shaped meat cakes with dead eyes and a bacon diaper. 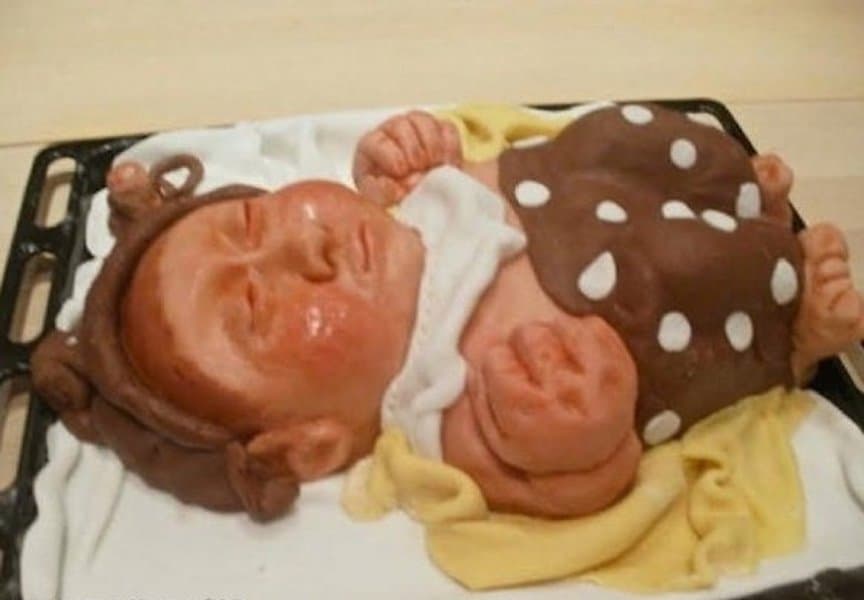 All mothers worry at some time or another that they will get stuck with an ugly baby. It probably didn’t help the receiver of this cake that the baby on it looks like a forty year-old dwarf. 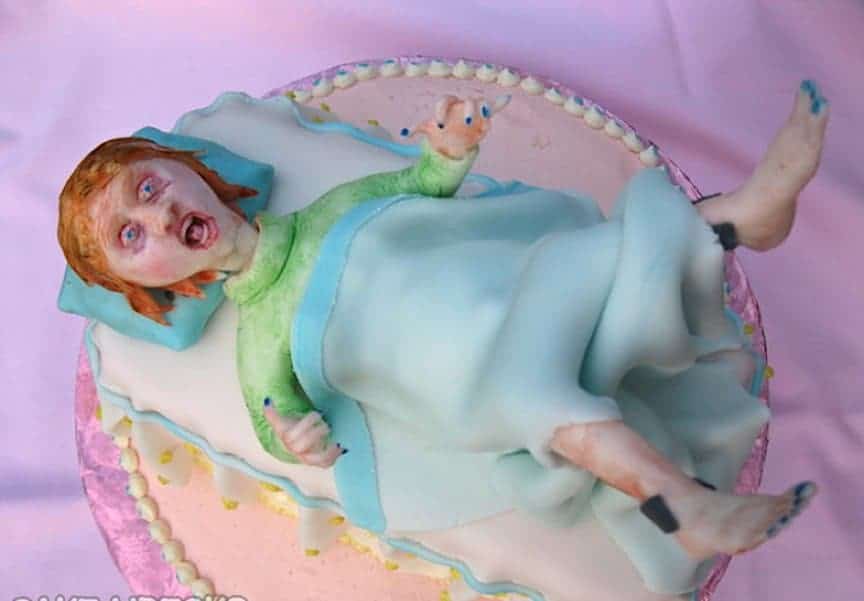 Yes, having a baby is a long, arduous, and painful endeavor. It’s quite another thing to remind a mother to be that she’s going to look like she’s been possessed by a demon when she goes into labor.

Something Rotten in the State of Denmark 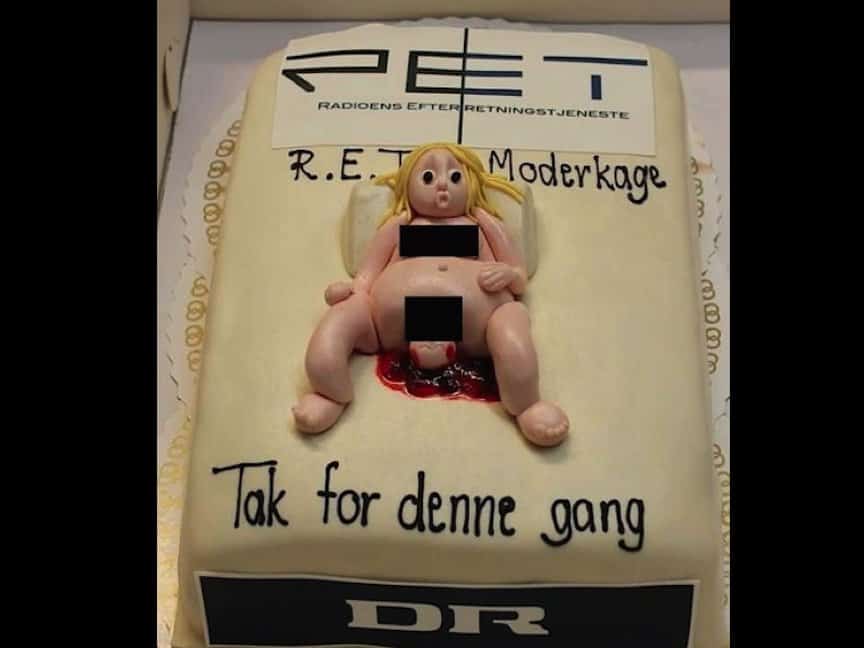 So you probably don’t know how to read or speak Danish, but that’s okay. The plump blonde mother-in-progress midway through a bloody childbirth speaks loud volumes. 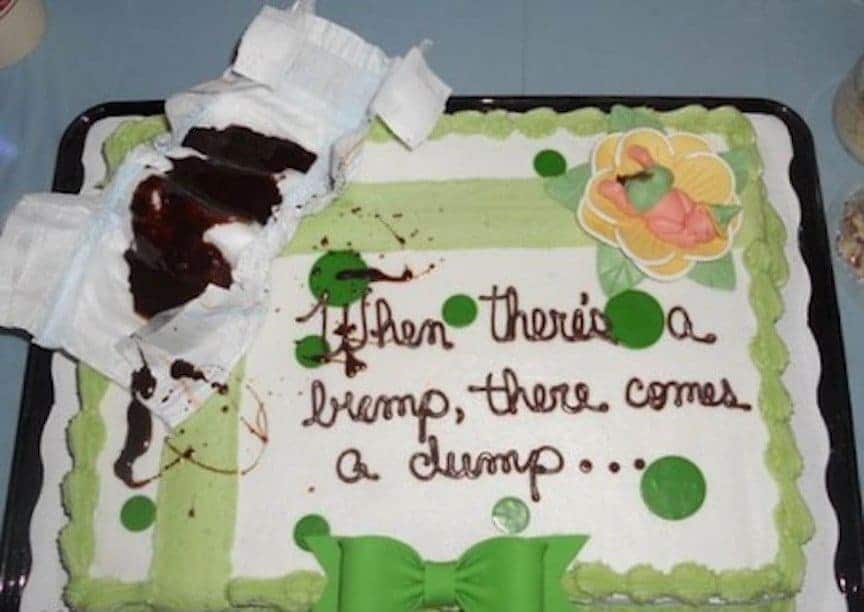 Everyone poops and that goes almost doubly so for babies. But just because it happens to be a fact of life doesn’t mean anyone would want to eat it.

Naked on a Plate 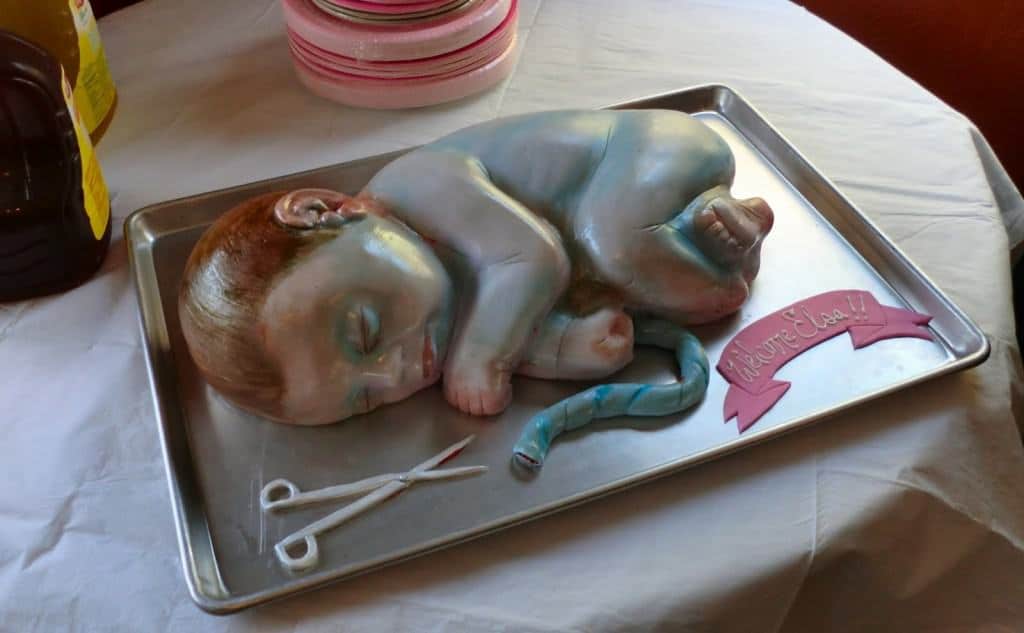 As disturbing as this cake appears, it might have been forgivable. Then again, the scissors and the lengthy umbilical cord up the creep ante to maximum. 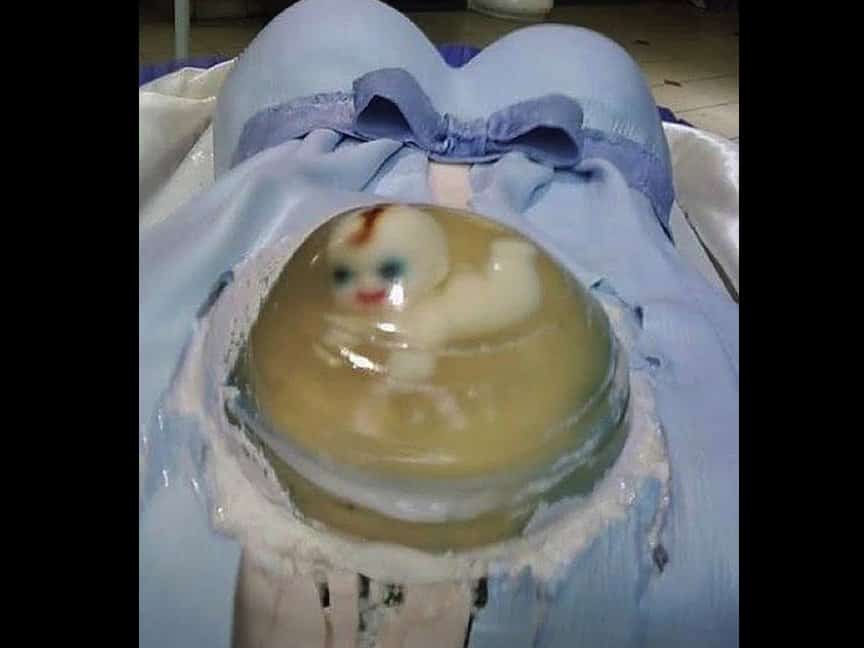 In Space, No One Can Hear You Scream 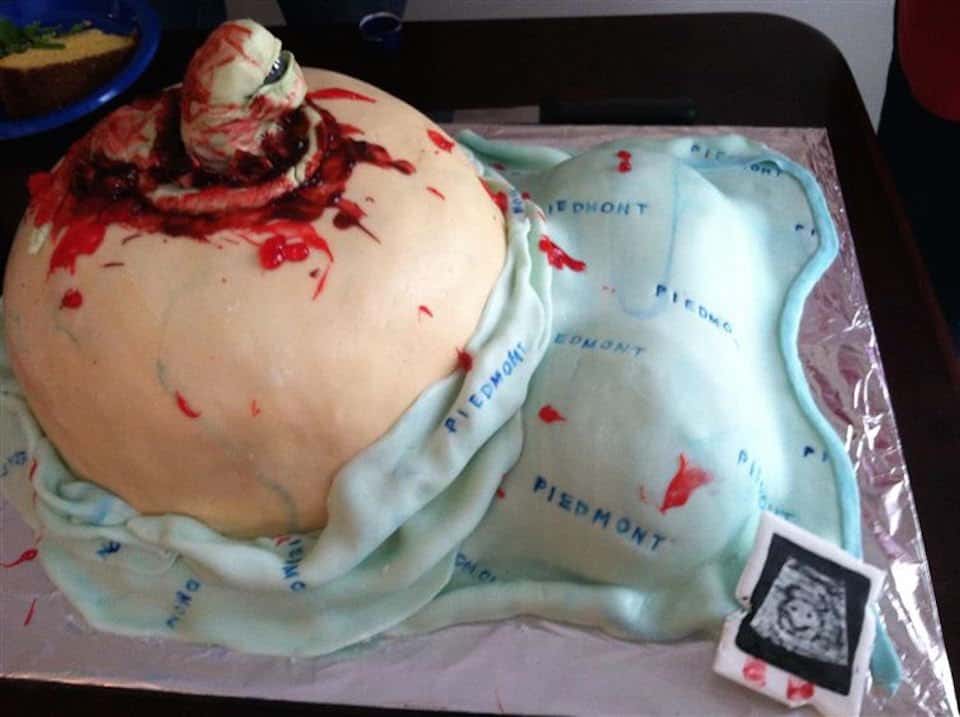 The classic 1979 Ridley Scott film Alien is one of the greatest horror movies ever made. Even so, that doesn’t make it suitable material for a baby shower, even if the mother-to-be has a sick sense of humor. 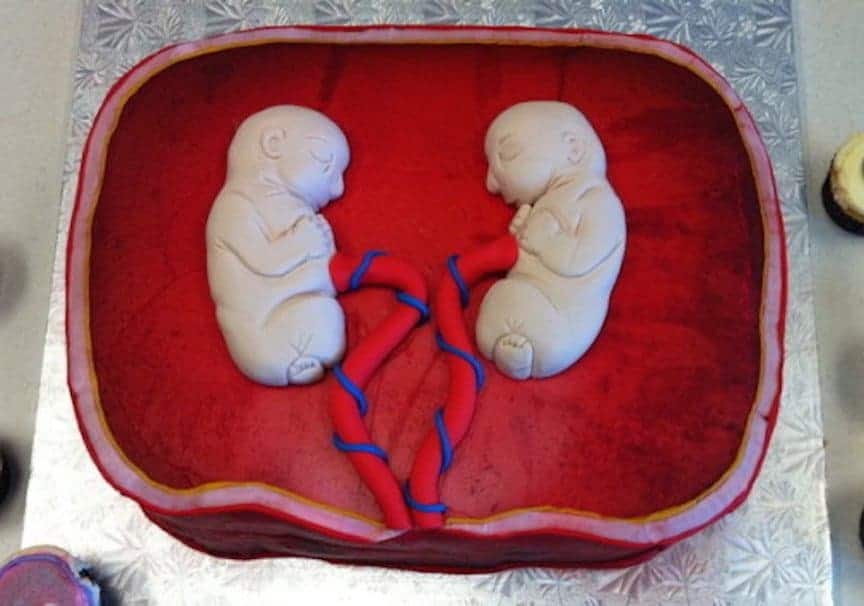 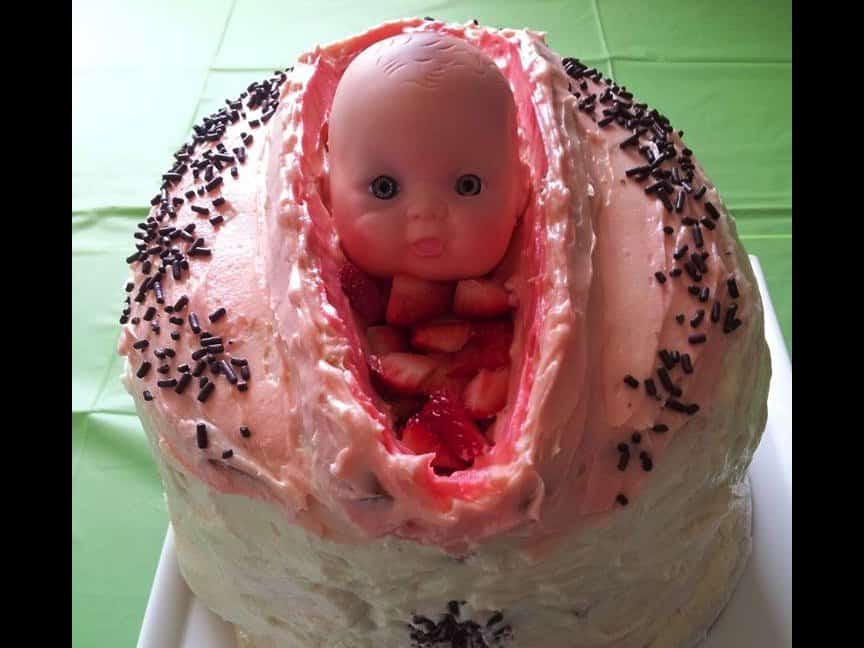 You probably don’t need to be told what this cake looks like, and even if you didn’t I wouldn’t write it here. It might still have been a bit funny if it weren’t for the disembodied doll head. 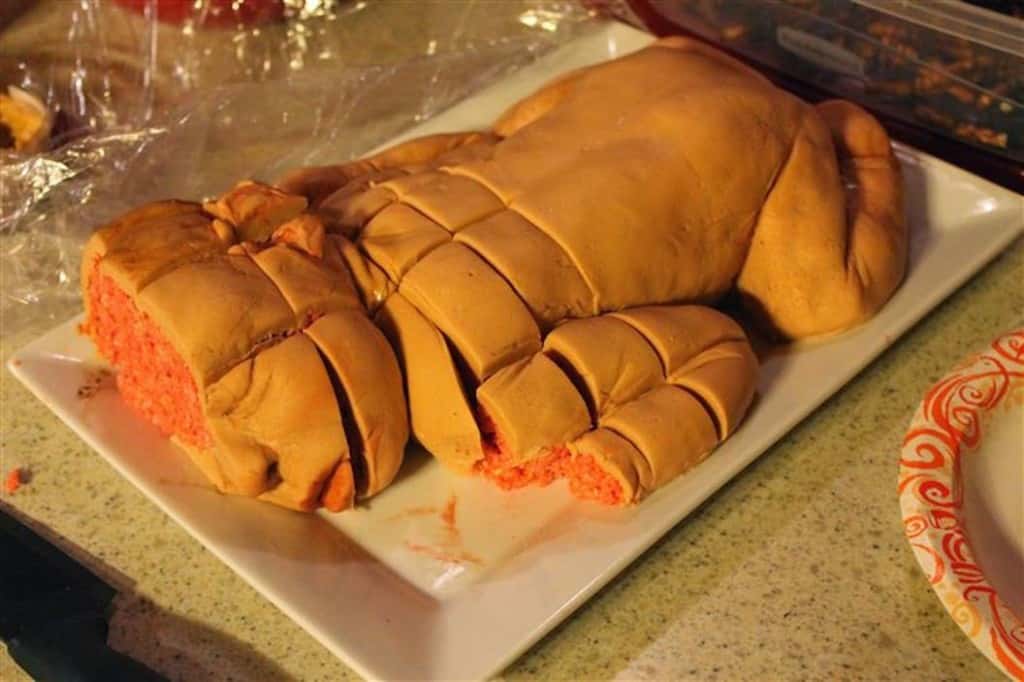 This cake was very likely quite precious when it was still intact. But then it got sliced up, and the inside just had to be pink and fleshy. 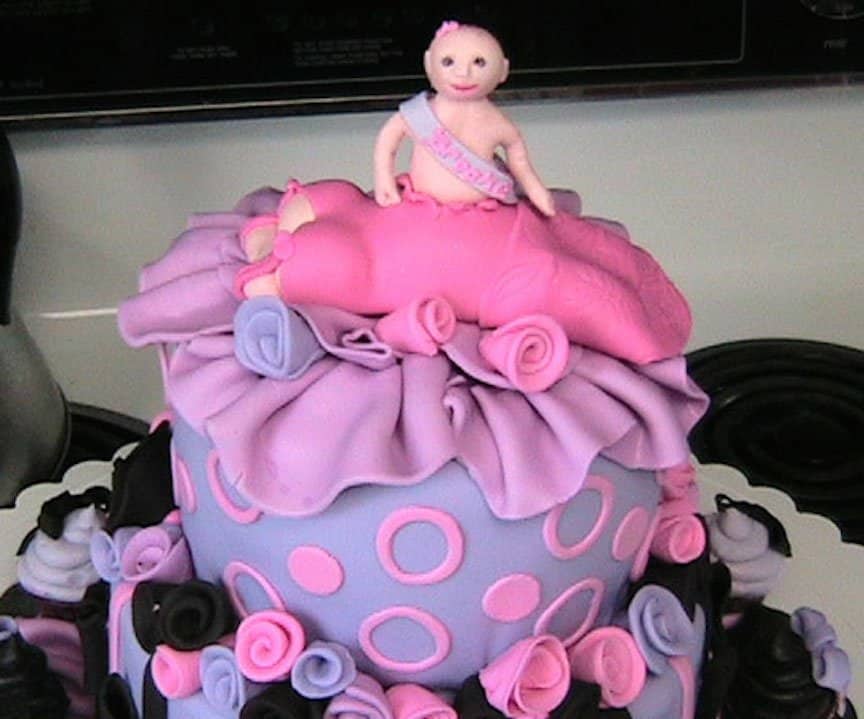 At first glance, this cake looks girly and adorable, filled with frills and floral colors. But then you look a little closer – a baby popping out of a headless, legless body isn’t actually that cute.

Baby From The Black Lagoon 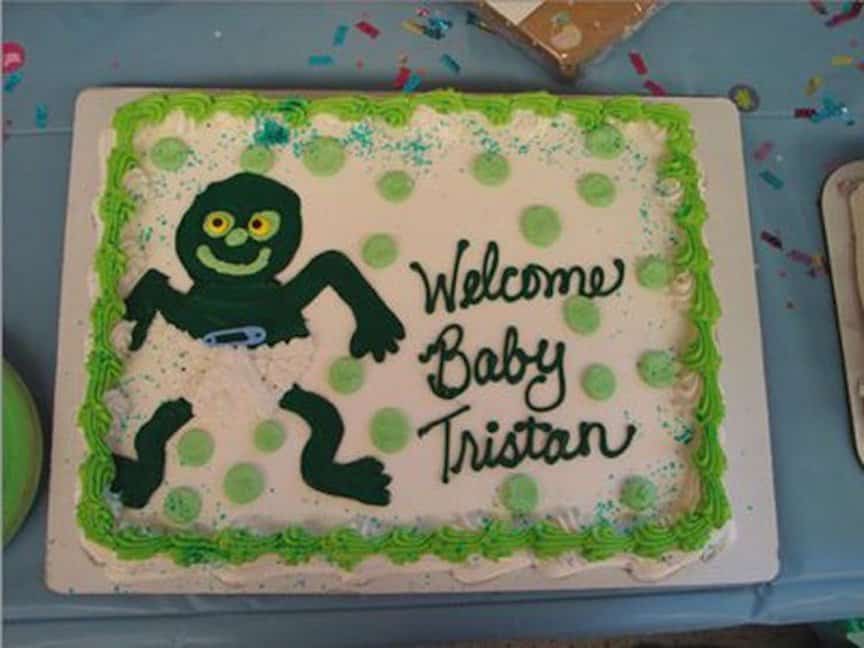 Tristan is such a lovely name and the child who bears it will likely be just as lovely. That makes it all the more unfortunate that he is depicted as a frog-child on his mother’s baby shower cake.

It Came From Beneath 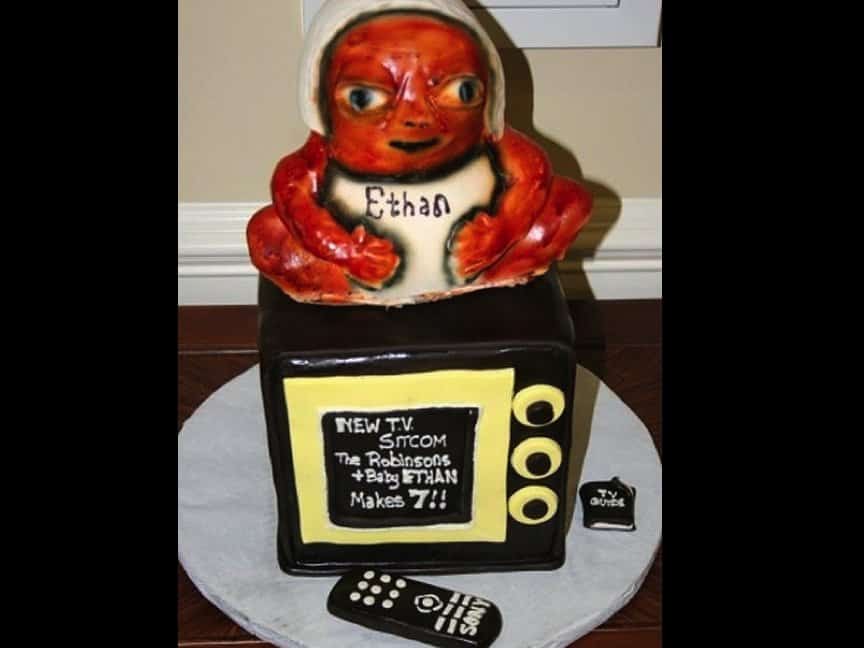 Looking at this cake, its pretty clear that its creepiness is the fault someone who doesn’t know how to work an airbrush properly. Still, poor little Ethan looks more like hell-spawn than a human baby. 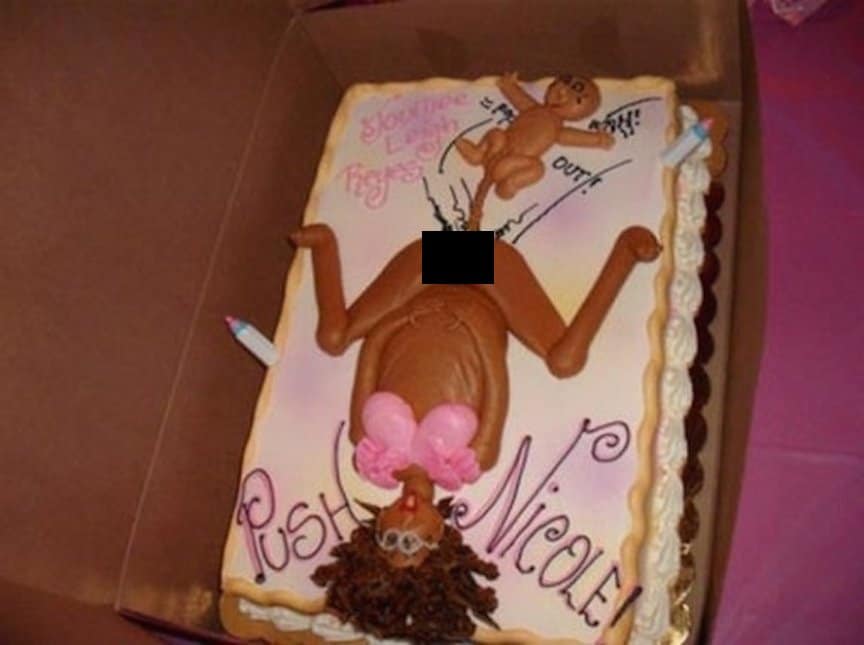 Before she goes in to have her baby, every woman is made aware of what she will experience. Note to baby shower guests – that doesn’t mean the mother-to-be needs to be reminded about her future pains on the top of her cake.