20 Of The Ugliest Prom Outfits You’ve Ever Seen

For so many people, prom night is a huge right of passage during the teenage years – a fun occasion where you get to dress up in cool evening wear and ride around in a limousine and go to a fancy dinner and dance all night long and steal some beer from your parents when they aren’t looking. But for lots of people, the night of prom is 20/20 in hindsight, especially when it comes to that formal wear. Teens may think they know everything about everything, but clearly some of them really don’t when it comes to fashion.

In the Twilight of Our Youth 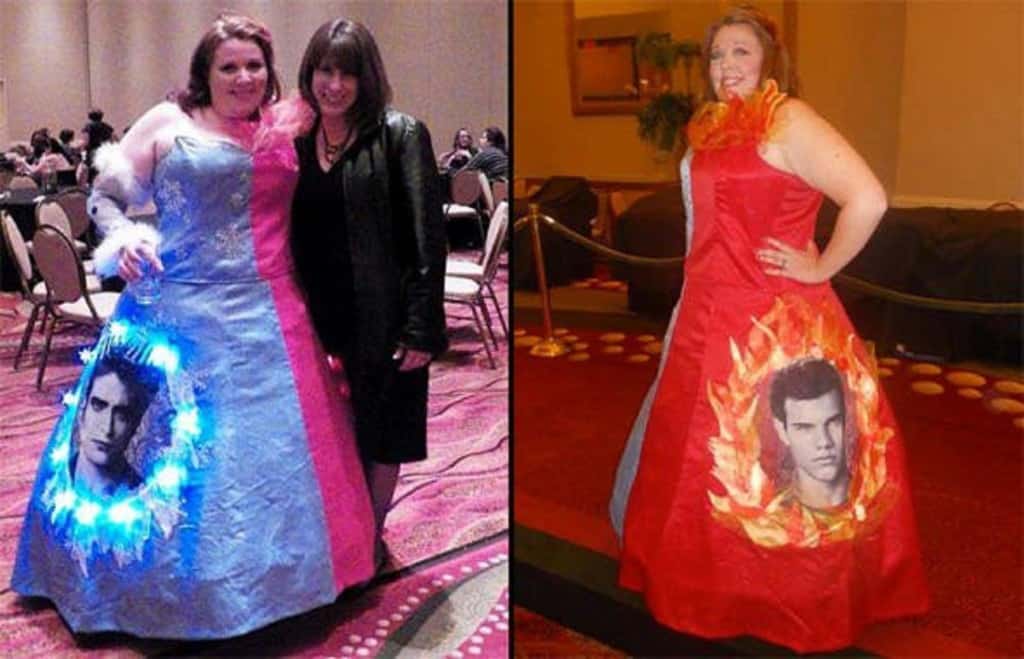 You already knew that some girls were obsessed with the Twilight movies, but this is a whole new level of creepy fandom. The real question here is: Team Edward or Team Jacob – its probably safe to say in this situation that they both lose. 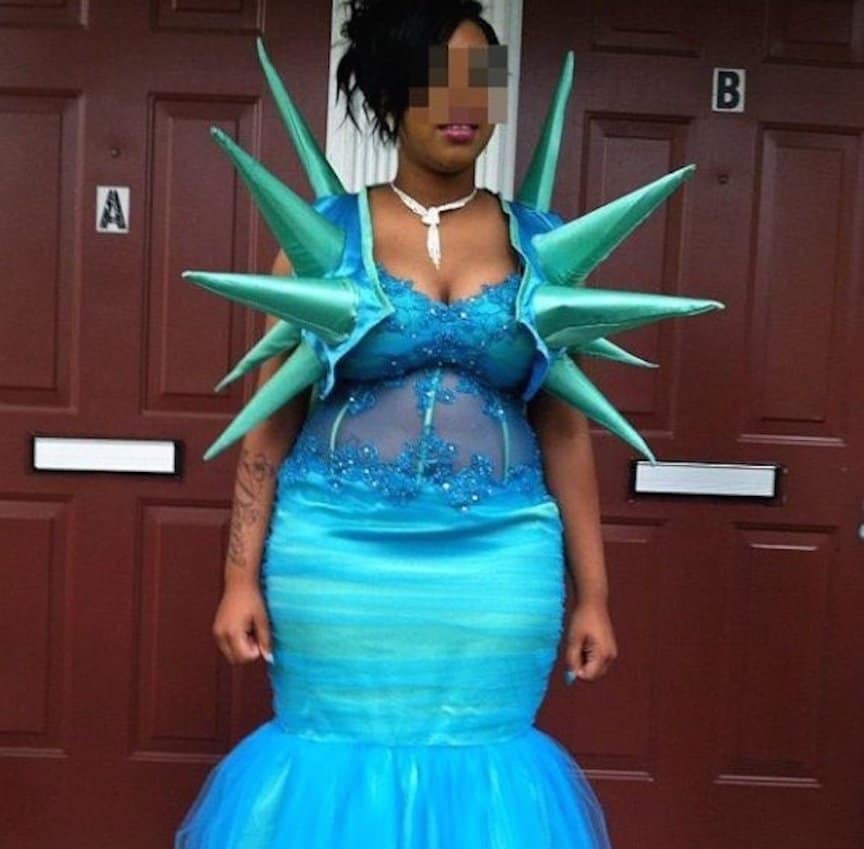 Now, there’s a creative way to deter unwanted dance partners. Its hard to figure out whether she’s trying out for the live action Frozen or if she’s looking to get caught in a Poke ball. 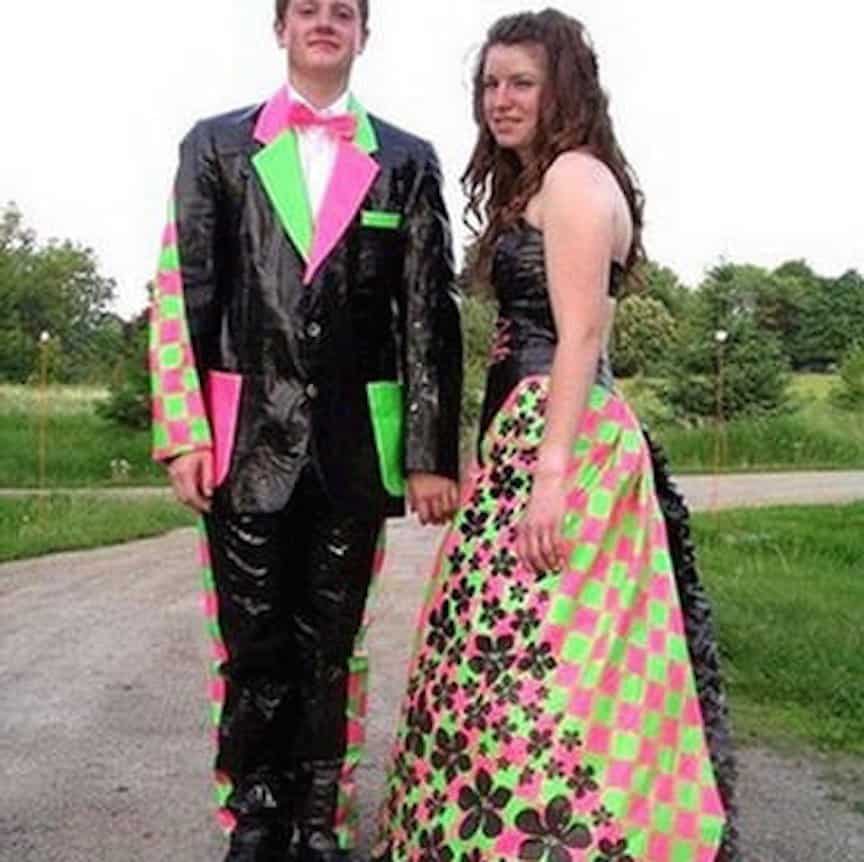 Sure making your prom outfits from duct tape is creative – heck, they give out college scholarships to kids who do it. But just because it might be in the name of academia doesn’t make it right. 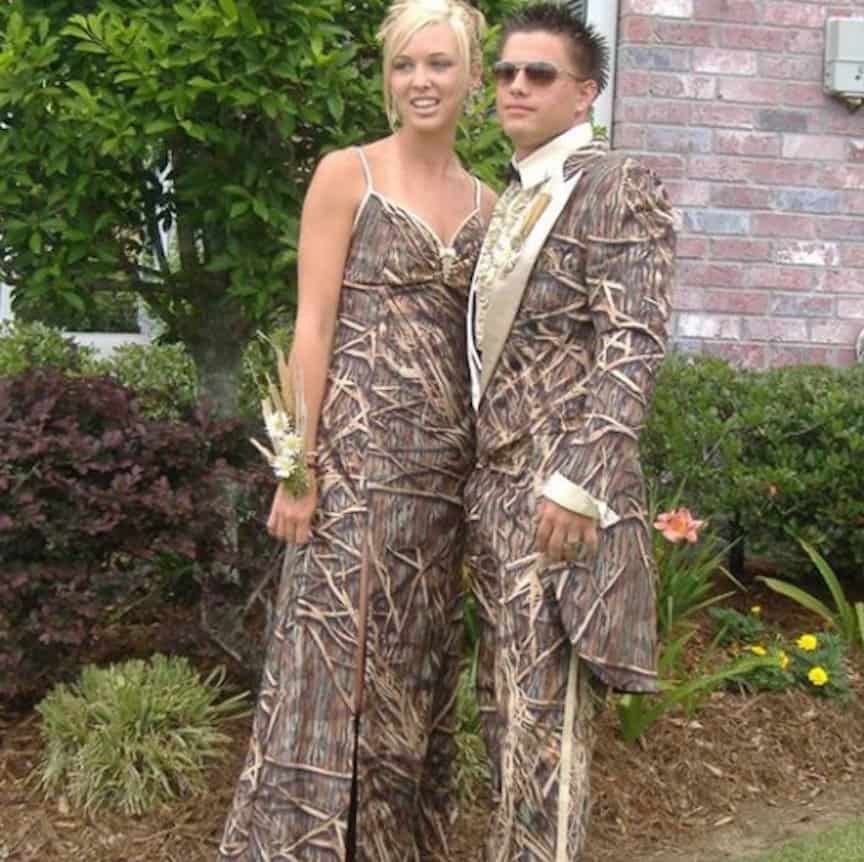 People who like hunting love their camouflage but this takes it to a whole new level. People like to say there’s no accounting for taste – never was a truer word said.

Off With Their Heads! 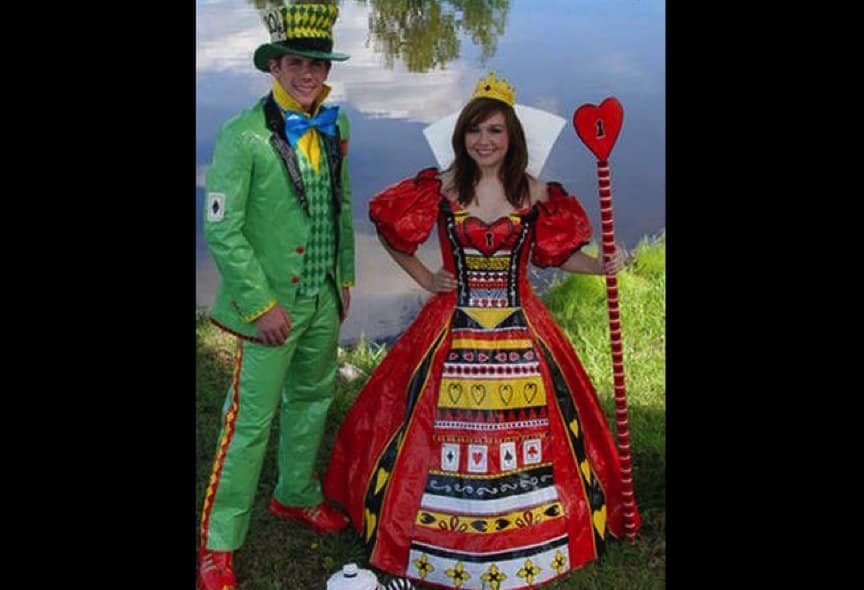 Who in the world doesn’t love Alice in Wonderland? Then again who loves the Lewis Carroll universe so much and is childishly naive to the point that they would actually want to dress up as one of those cooky characters? 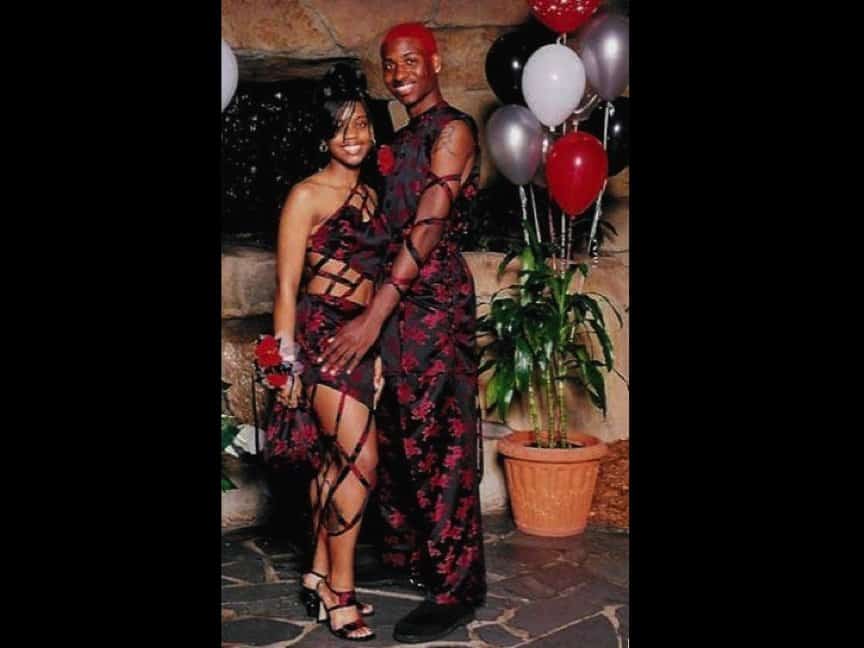 Admittedly, the fabric could have looked really cool, emphasis on “could have.” Not sure which is worse in this picture – the weird netting or the creepy Dennis Rodman dye job.

Its the Inside That Counts 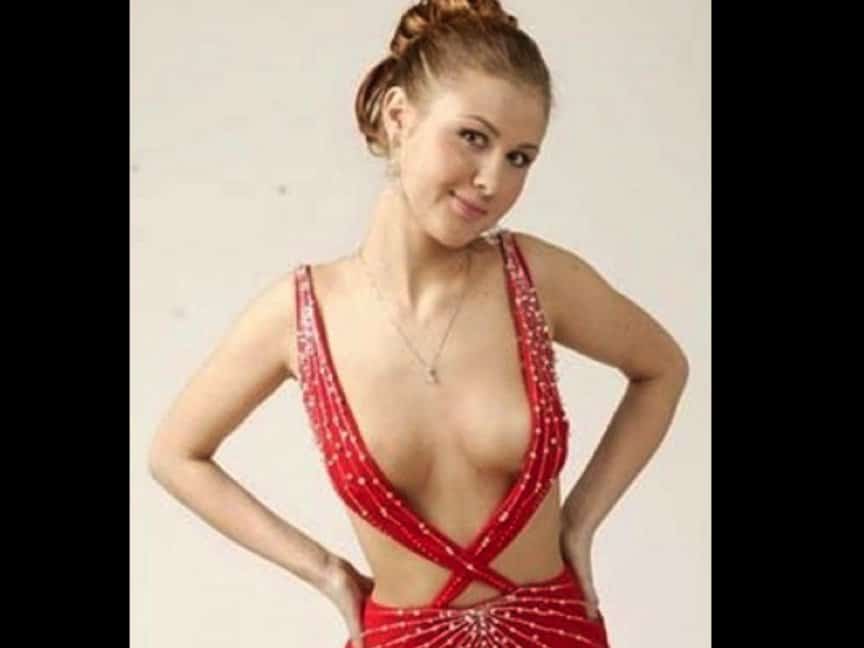 This seems more like a sparkling red advertisement for a loose teen girl than an actual prom dress. If there is anyone out there brave enough to try and wear this getup, remember these words: boob tape. 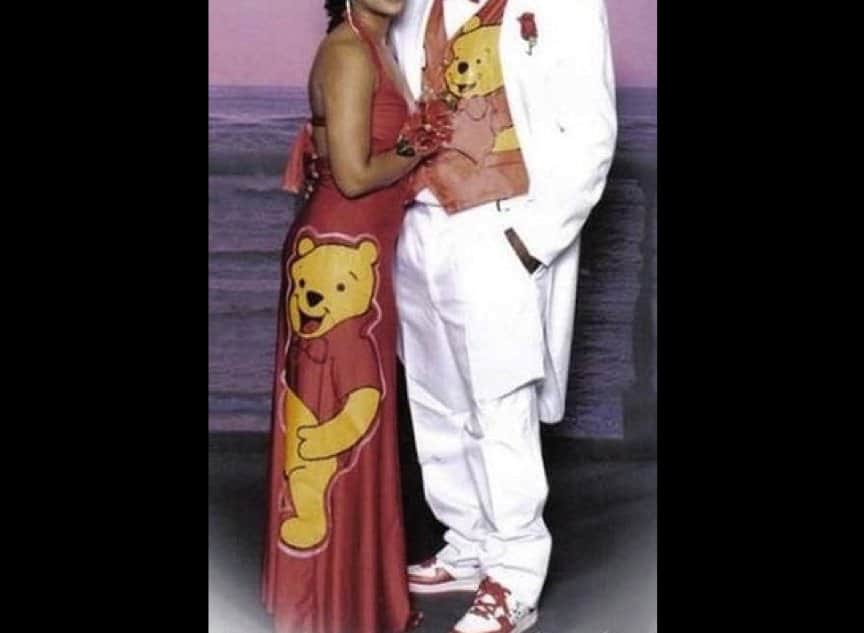 Winnie the Pooh has been a beloved literary character for over 100 years. But as lovable as the adorable stuffed bear is, he probably doesn’t belong on evening attire. 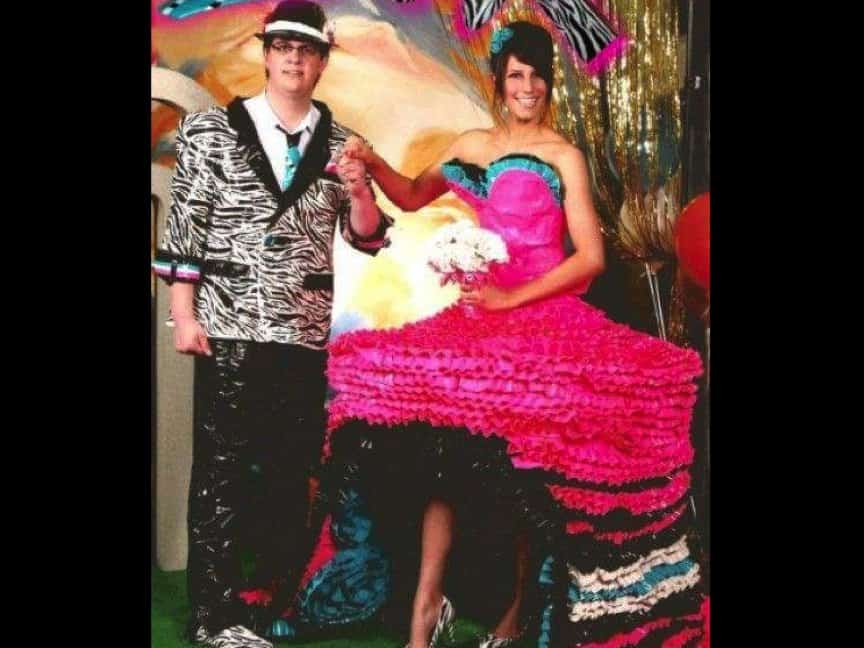 More power to you if you can go for an avant grade look and actually pull it off. On the other hand, trying to combine shapes, colors, and materials that don’t belong together can lead to a horrible things… obviously. 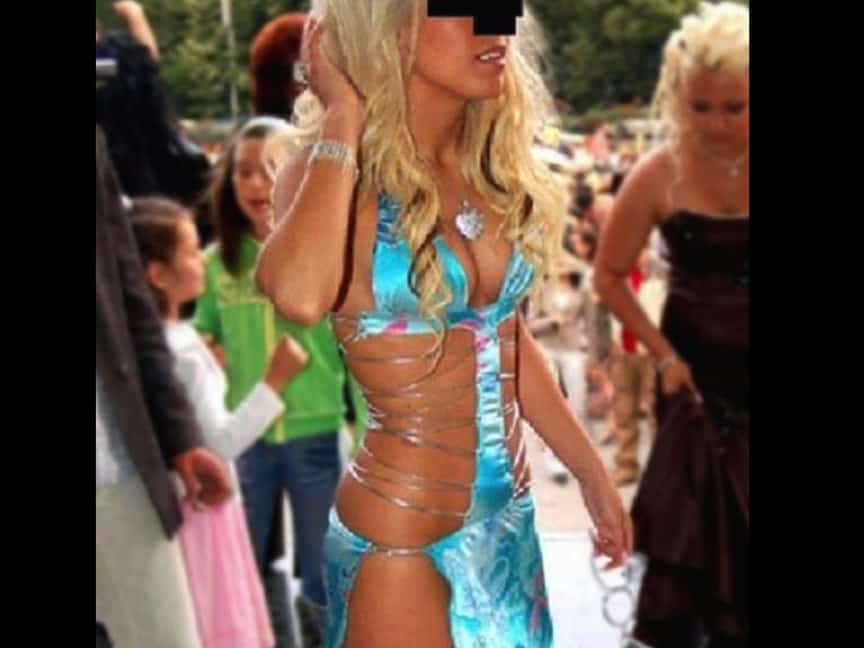 There’s nothing wrong with wanting to show off a great physique when you’ve got one. There is something wrong however trying to cover little bits of yourself in the tackiest way possible. 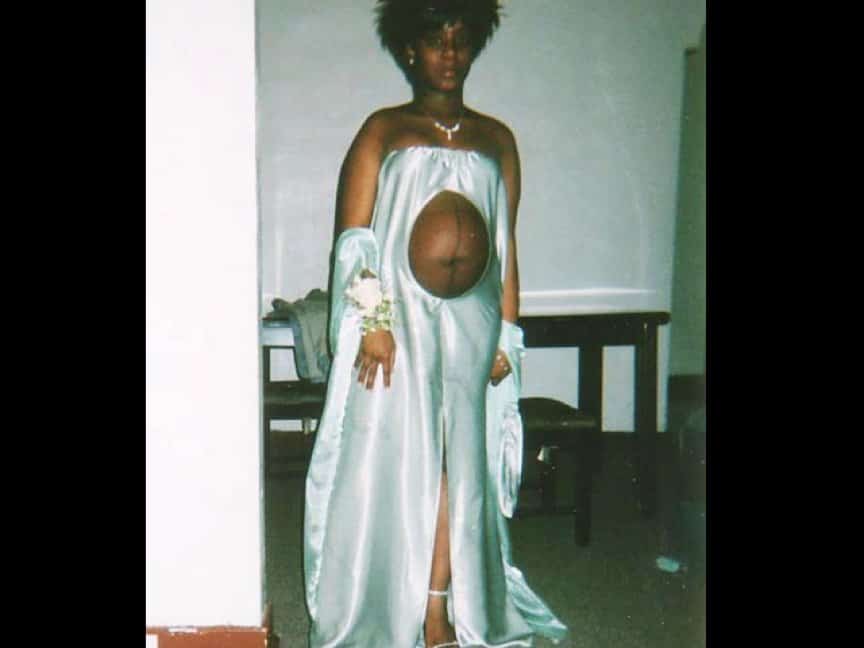 Babies are wonderful and should be celebrated. But do pregnant teenage bellies need their own keyhole cutouts in their prom dresses? Don’t worry, it was a rhetorical question. 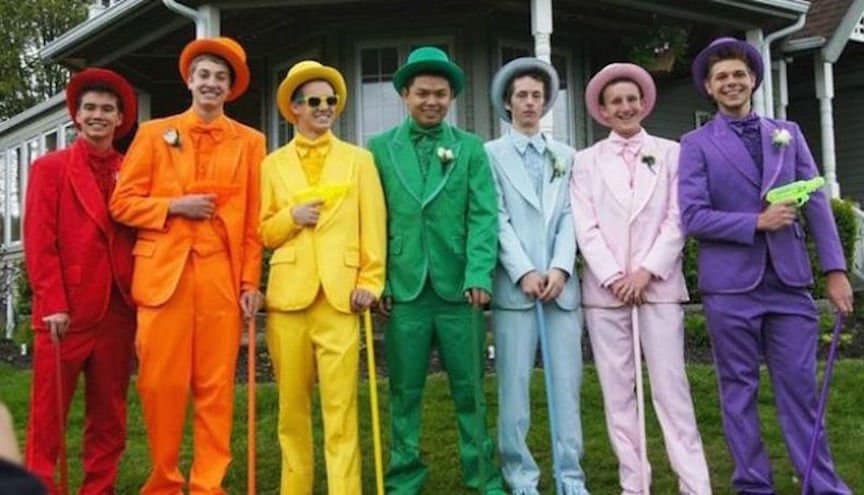 Coordinating outfits is part of the fun of going to prom, but some blow it way out of proportion. Looking at this picture of smug teen boys, its hard to pick out which one of these kids got the worst out of this little collaboration. 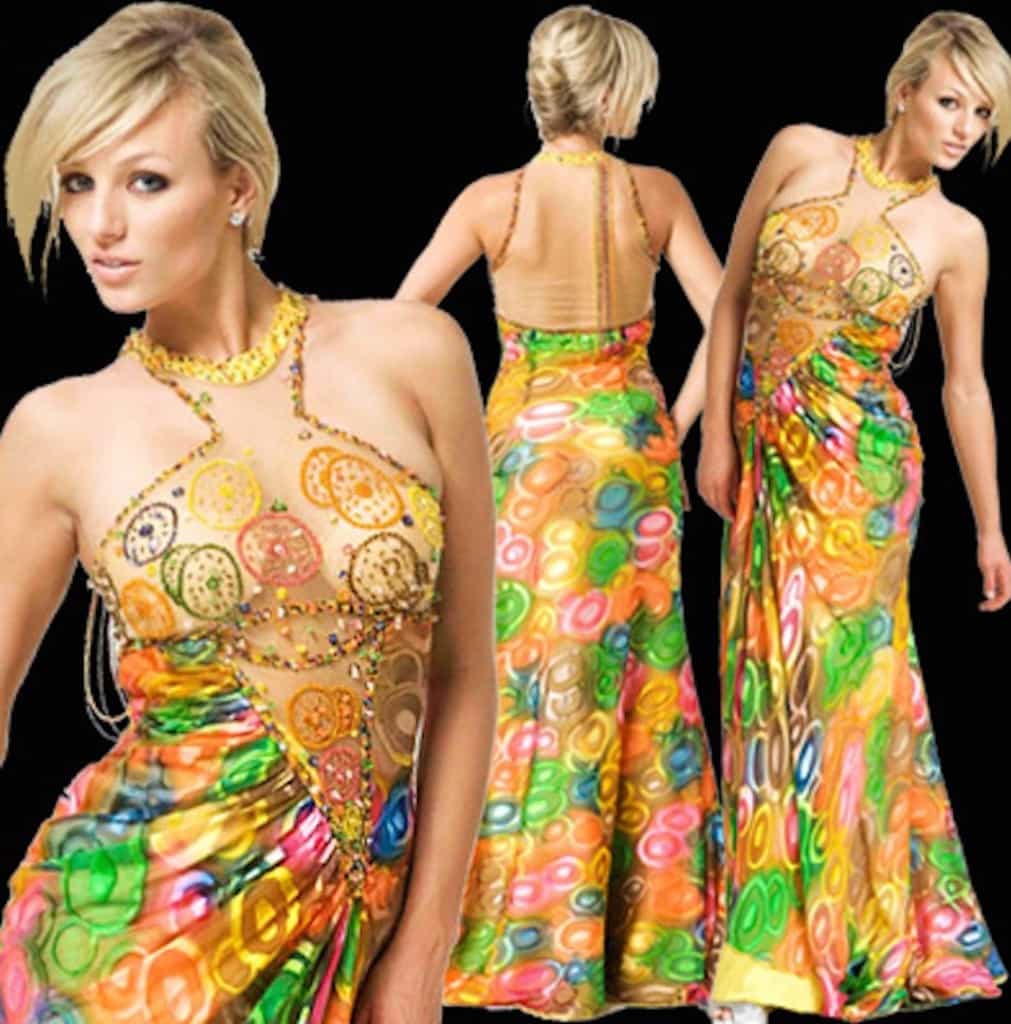 It can be really hard to give a strict definition to what makes something ugly; most of the time its one of those qualities you know when you see it. Well, you just saw this monstrosity of a prom dress, so there you go. 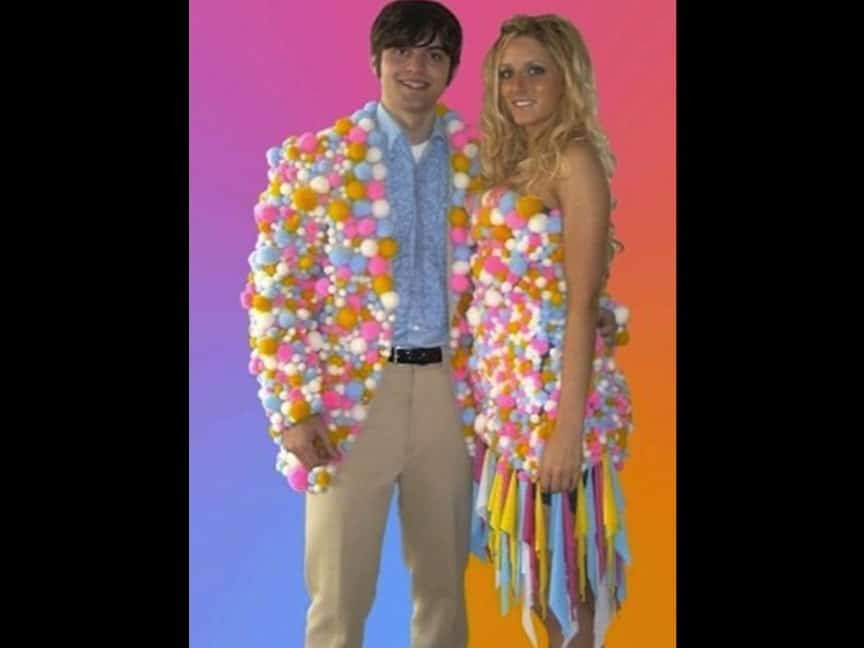 If you have the know-how to make your own prom dress than more power to you. But pastel pom-poms? For their sake, I hope they just lost a bet and didn’t actually want to wear that. 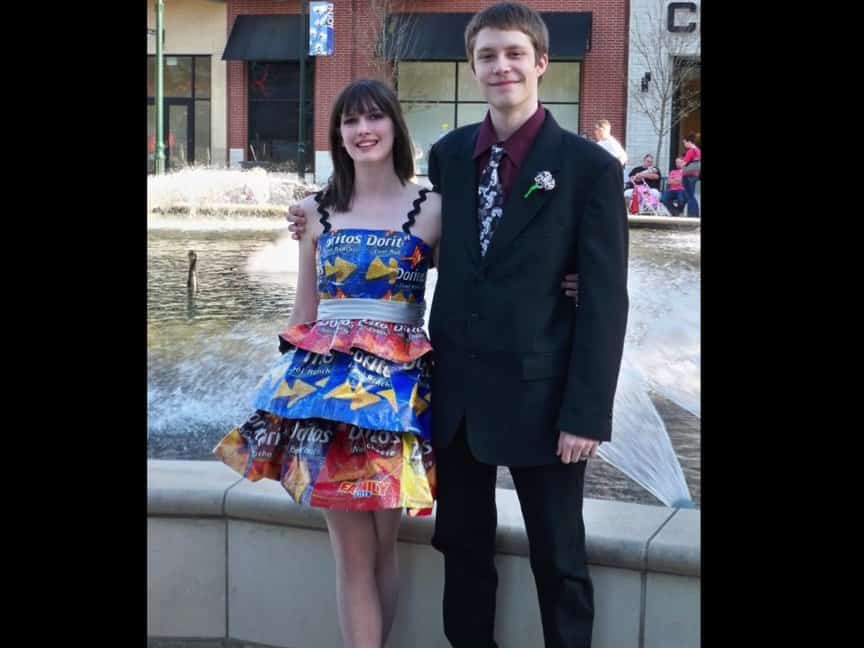 Granted, this photo isn’t half bad – that suit, while too big, actually looks pretty decent.Doritos is one of the greatest junk foods there ever was or will be, but they aren’t suitable to wear to prom. 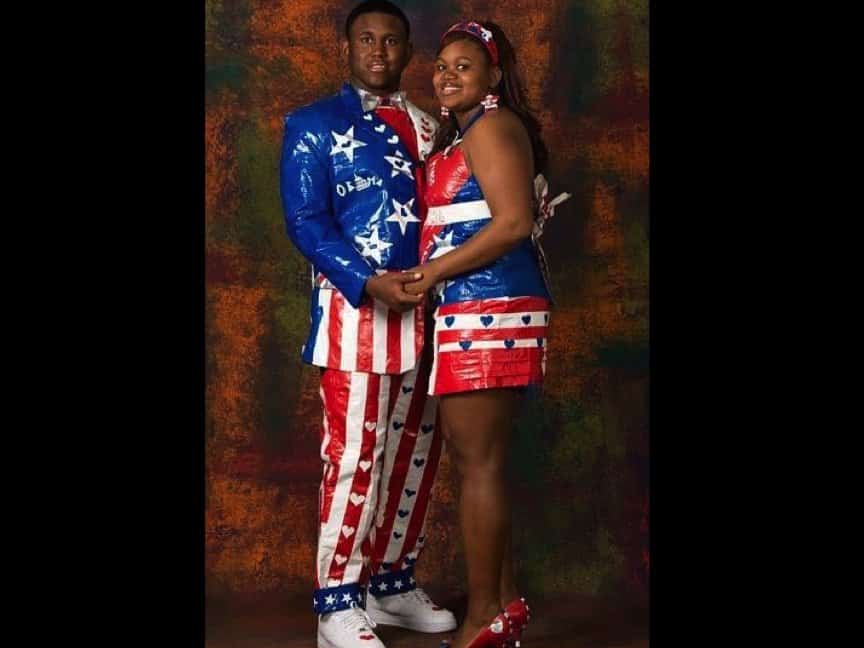 God Bless America? More like God bless those idiot teenagers that actually think they look good in their horrid prom wear while the rest of us laugh till we ache. 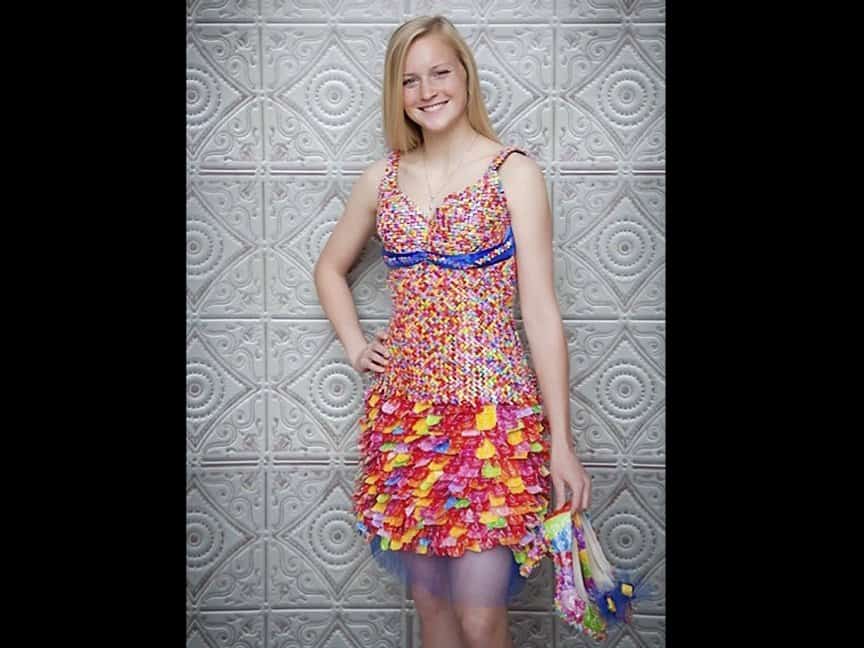 Project Runway became famous when it asked its clothing designer competitors to make trash into couture. But just because it looks great on TV doesn’t mean you should apply it to real life – candy wrappers aren’t that chic. 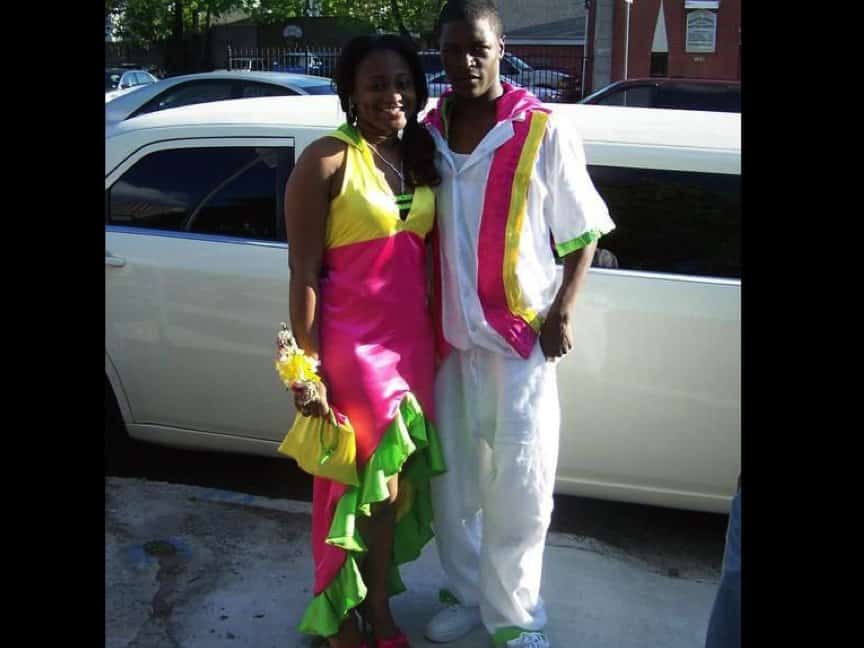 If it weren’t for the garish coloring, the young lady’s dress might be forgivable. But the gentleman’s outfit on the other hand… let’s just say he could have put in a little extra effort beyond a white track suit. 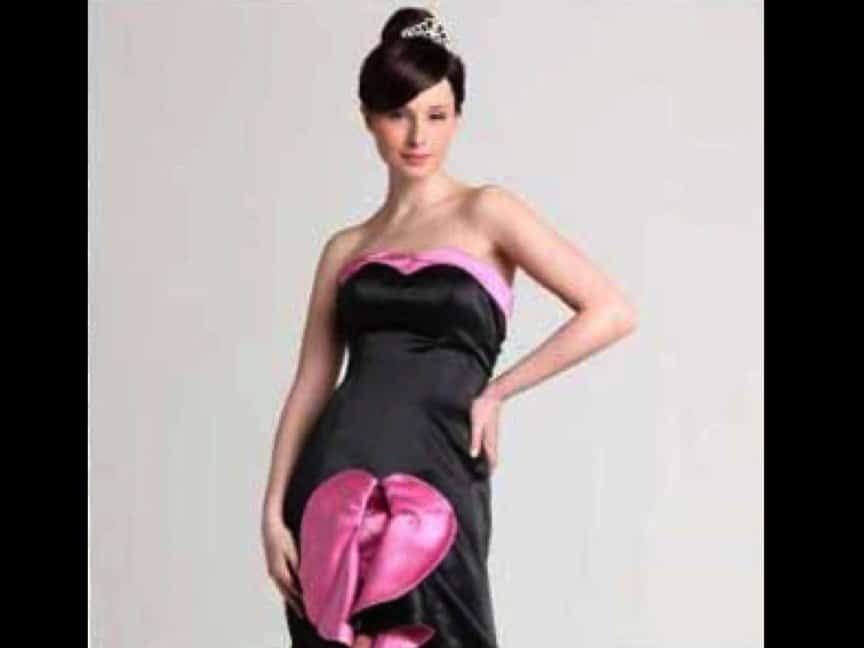 The female form has always been something to celebrate, but sometimes dress designers can take that way too literally. You probably don’t need to be told what the front of this tacky dress looks a lot like. 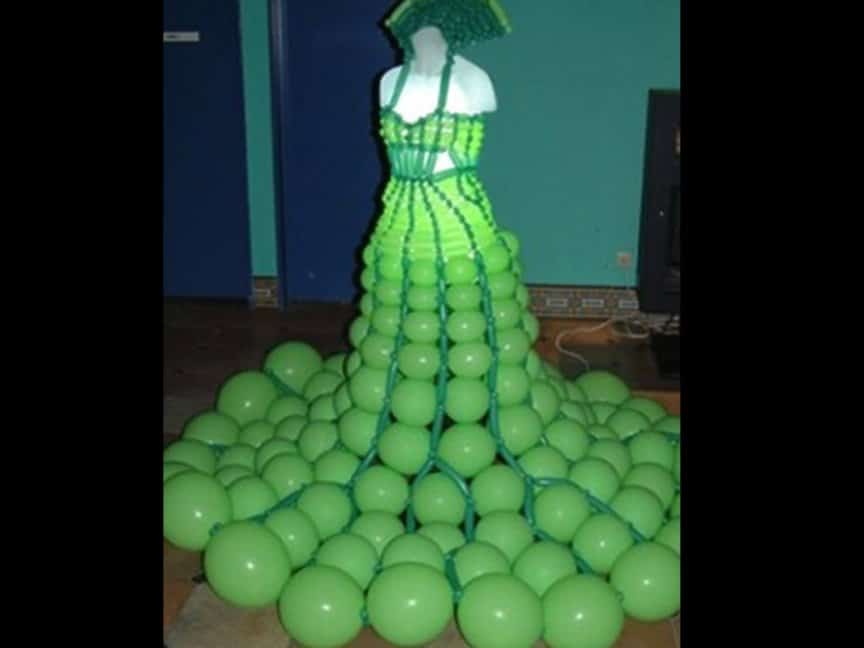 Prom night leaves a lot of girls floating on a cloud, but it seems some want insurance in that department. Sure balloons are fun, but this probably should come with a “keep away from sharp objects” warning or this gown will become more revealing than it already is.