You don’t always have to turn the world around you into guitar-inspired items in order to prove your love for the classical rock and country, but some people just can’t help themselves! From choppers, to toilets, to mile-long forests, people around the world have been inspired so much by this instrument that they have dedicated their time and effort to create some of the most wonderfully bizarre guitar designs in the world. Whether you are a fan of the guitar or not, you’ll certainly have a laugh or two, or even be amazed at the amazing guitar-shaped creations people have come up with. 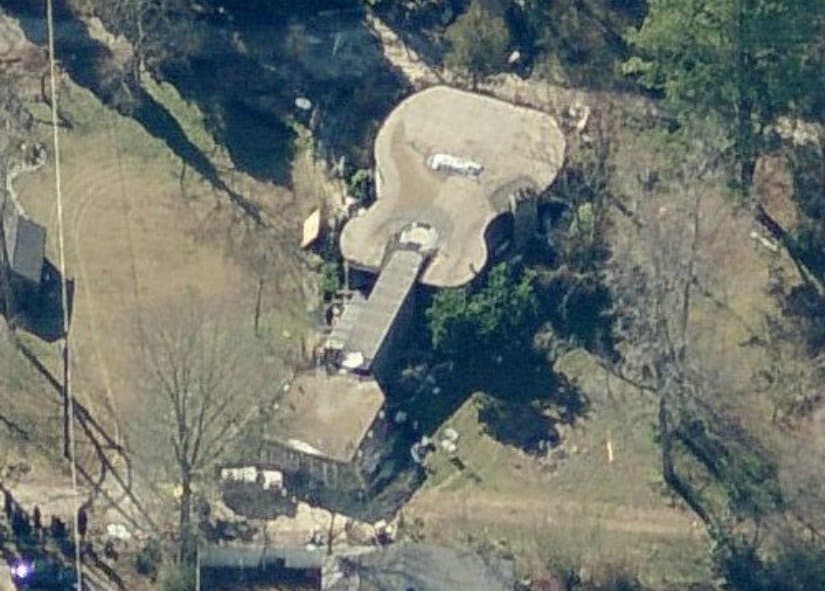 Found in Georgia, USA, the home of Elvis Cardin, a western singer, has been design to resemble a guitar when looked from above. The project took as much as 16 years to complete, mainly because of the needed accuracy, as the singer who saw this house in a dream desired for it to be a 3,800 square-foot replica of a classical Gibson guitar. 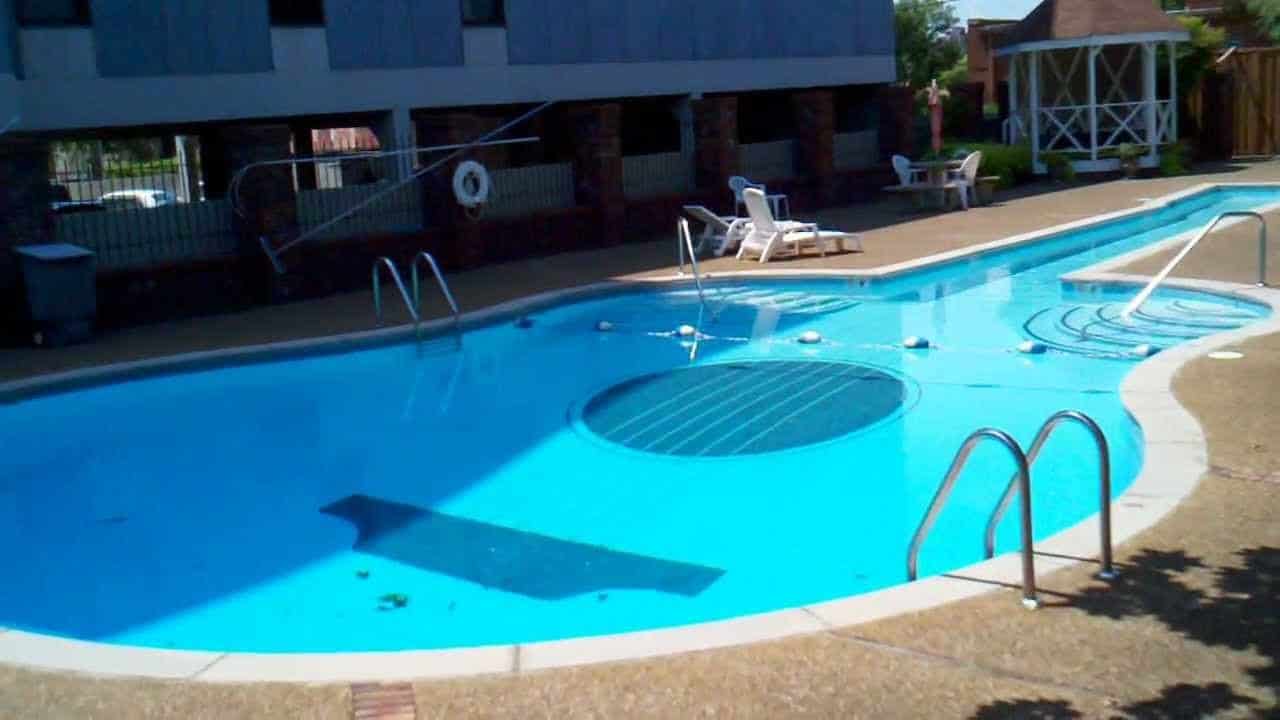 Did you know that in Tennessee, USA you can dive into a guitar? While swimming pools shaped as a guitar can now be found at several places in the world, the first such design was installed as early as the 1960, attracting over 30,000 tourists per week. Built in Oakville, Tennessee, the pool was later closed down because of continuous neighbor complaints. A duplicate of it was built in Nashville, where it still remains to this day. 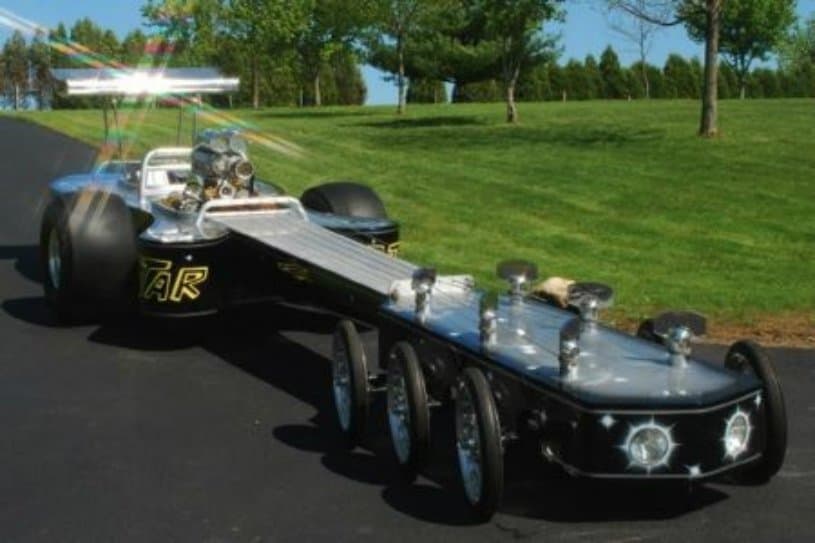 An eight-wheeler, 24-foot-long and custom-made, the Guitar Car, known as the Git-Car is a working automobile inspired by the musical works of Chuck Berry and built by the custom car legend Jay Ohrberg. 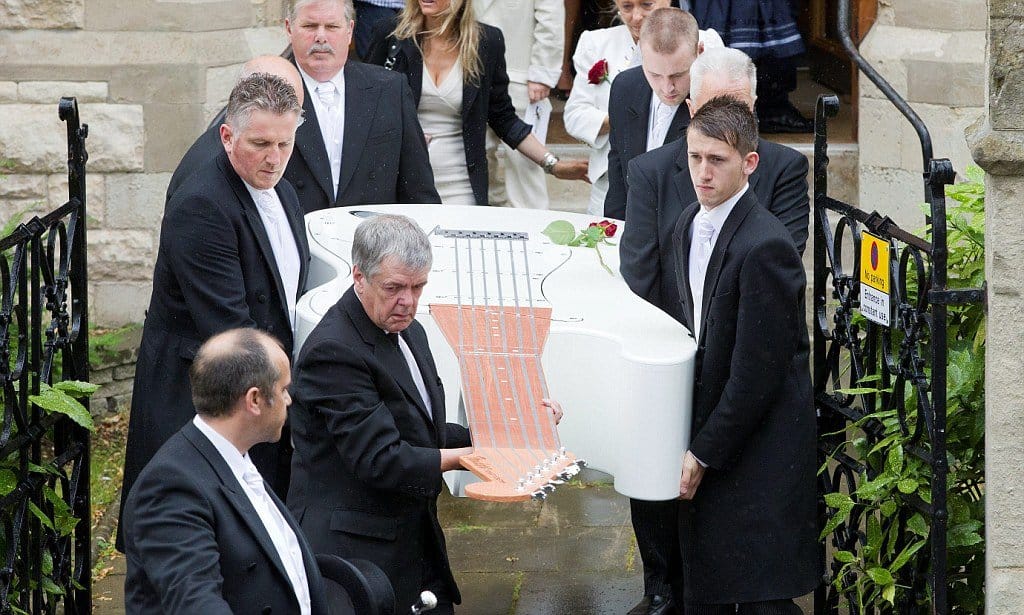 Going out in style, the infamous musician John Graham left this world in 2012 in a 12-foot-long coffin, shaped as a Fender Stratocaster guitar, an exact replica of the one he received as a gift when he was 15-years-old. The idea for the coffin was his wife’s, as she decided that there isn’t a more worthy tribute for him than this. 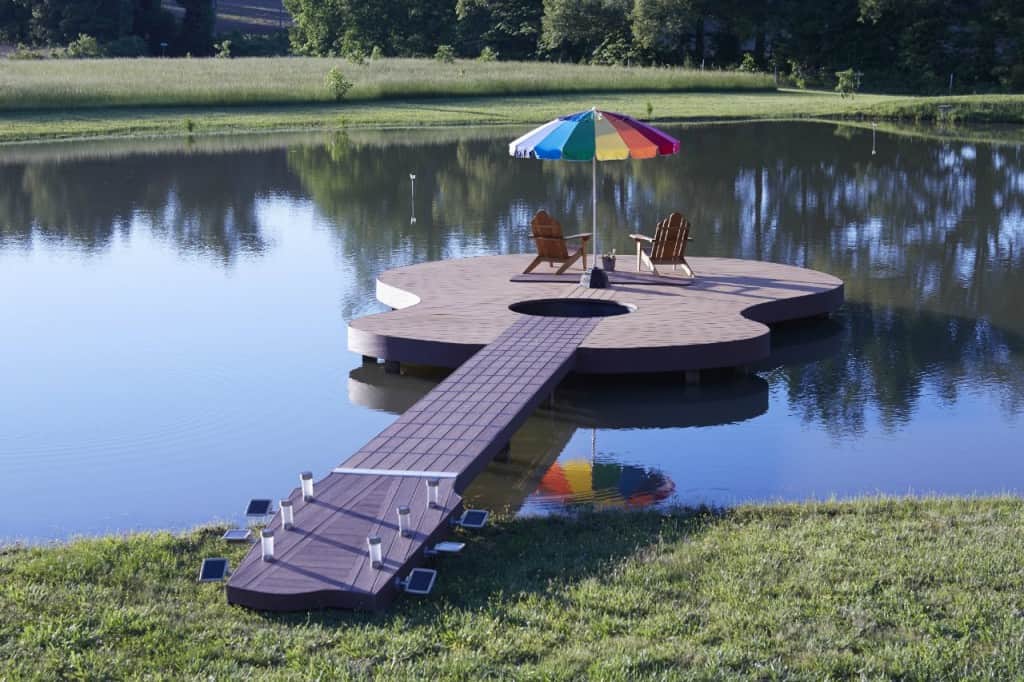 Floating upon a Backyard Pond in Illinois, USA, the guitar-shaped deck is used as a fishing dock and entertaining the friends and visitors of a married couple, who, having too much to spend, created their own musically-inspired oasis. 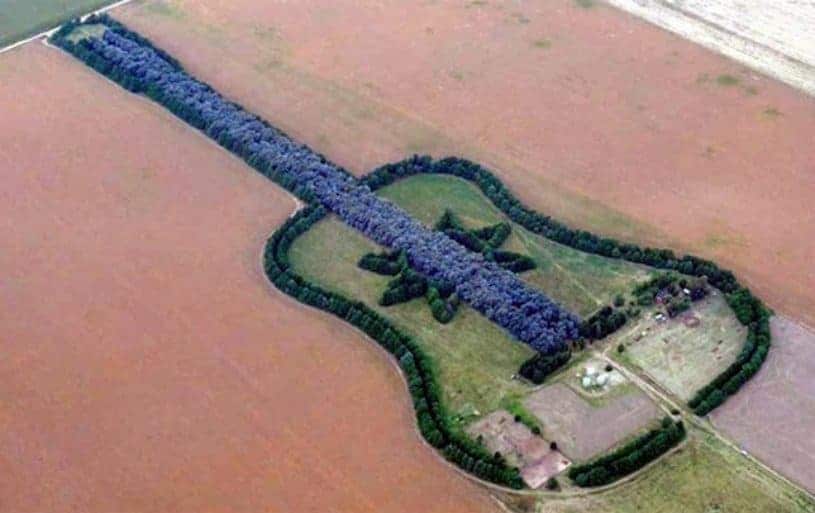 When Argentinian farmer in General Levalle, Argentina lost the love of his wife, Graciela, Pedro Utera, decided to honor her by creating an over-sized tribute of more than 7,000 living trees, resulting in more than 2/3 of a mile long forest in the shape of a guitar. Love can do wonders! 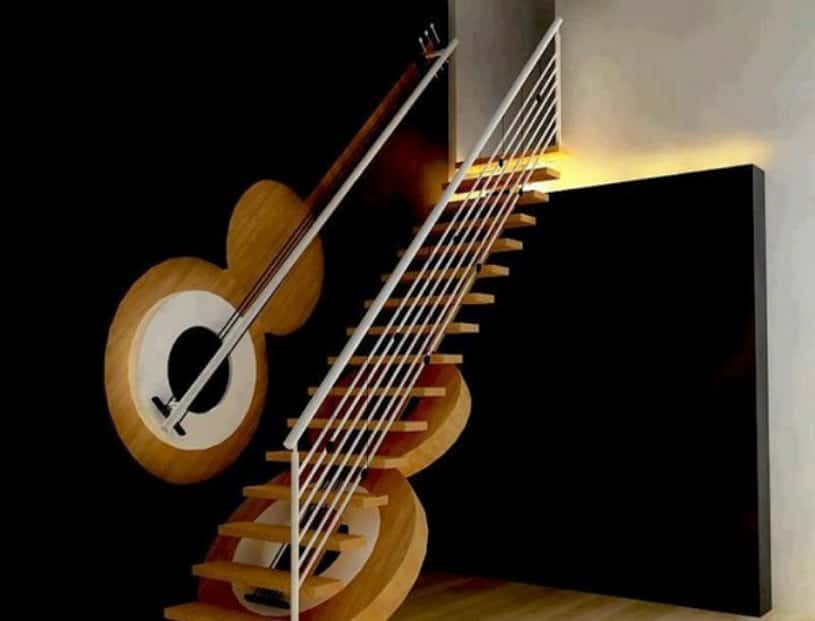 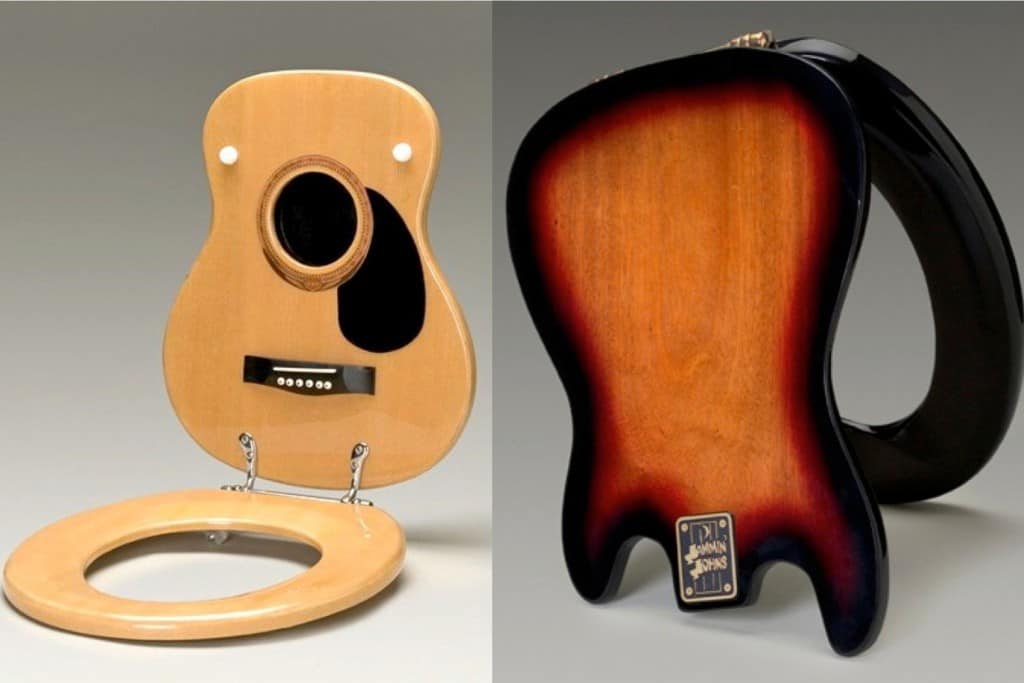 In Kentucky, USA you can find pretty much anything, as proven by this amazing toilet seat. Recommended for the true music enthusiasts, these guitar toilet seats are available for purchase in both acoustic and electric versions. 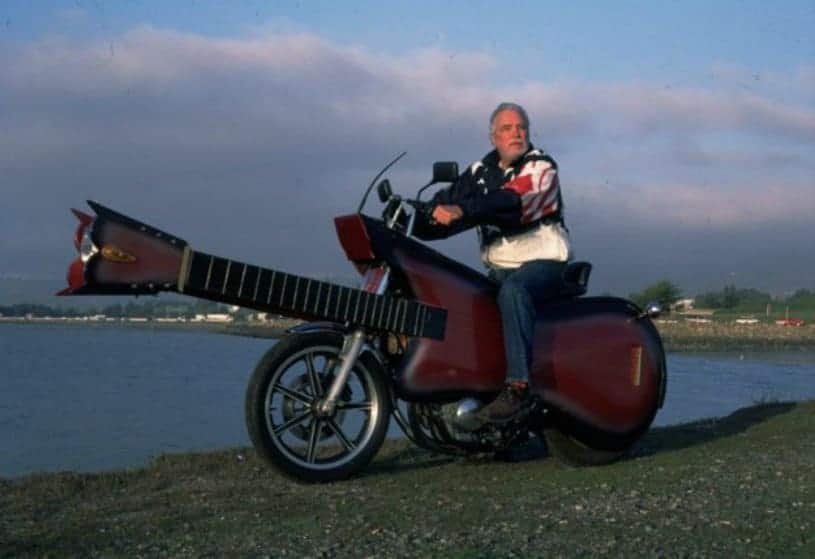 Road trips are extremely popular in the US, as some already know. However, what’s even more popular is doing them in style – with a custom-designed chopper. Created in 1981 by Ray Nelson, the Guitar chopper was made for one of his cross-country trips, but the design eventually got so popular that he started displaying it at art shows, fests, and even museums. 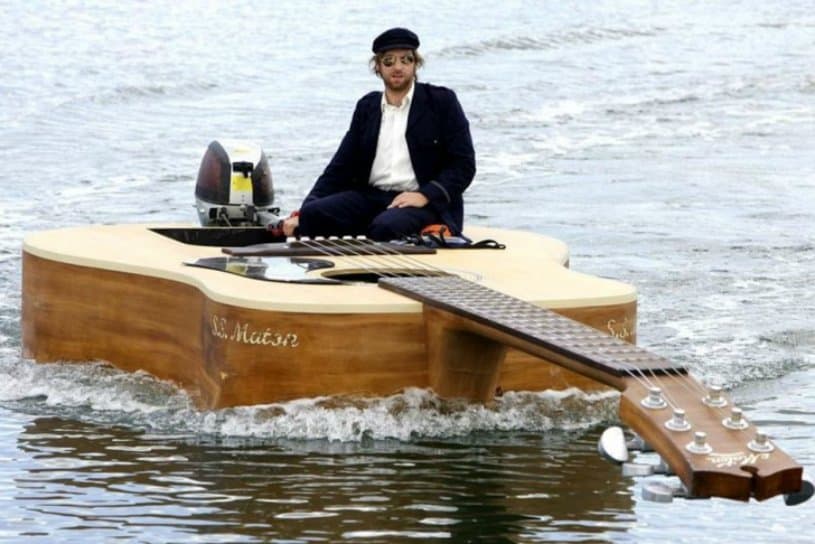 If you thought that only cars and bikes can help you travel in music style, you should think again! The lovers of the sea should look no further for inspiration than the Australian singer-songwriter Josh Pyke who came up with the idea of a floating acoustic guitar for his latest music video. Clever indeed!