The famous author and poet D.H. Lawrence once wrote, “I never saw a wild thing sorry for itself.” We constantly applaud amputees like war veterans for being brave in the face of losing limbs, but what about the fauna out there? Animals fall ill and get injured all the time, but it wasn’t until quite recently that modern biomechanical engineering started fashioning functional prosthetics for our scaly and furry friends out there. These steadfast animals are so sweet they will make you laugh with joy until you cry. 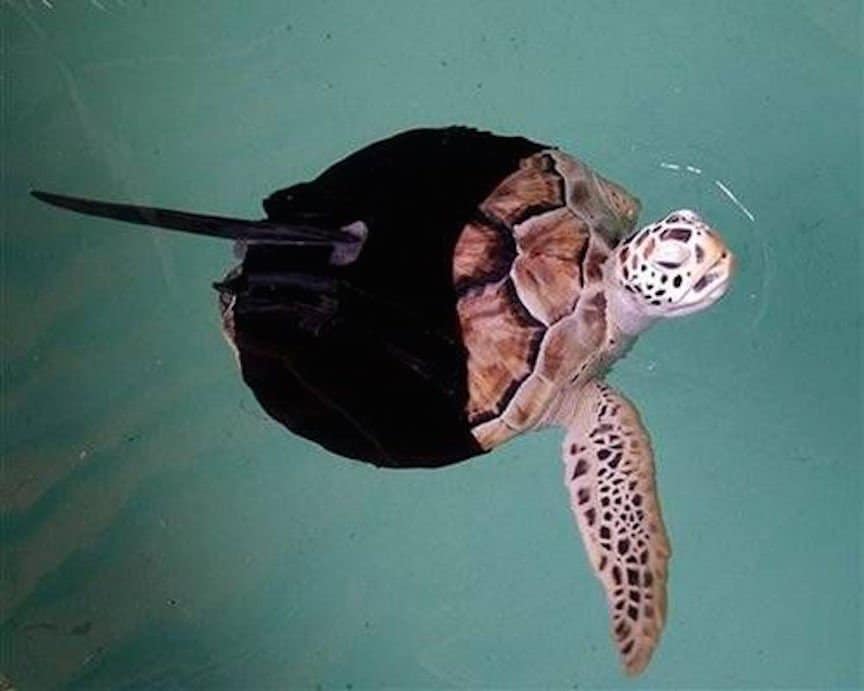 The handlers that care for this sweet sea turtle believe she lost all but one of her flippers to a shark attack. But her life has greatly improved since being fitted with an artificial fin, which is lovingly referred to as her “ninja suit.” Apparently, Allison loves her fin so much that she tries to swim away when her handlers try to remove it. 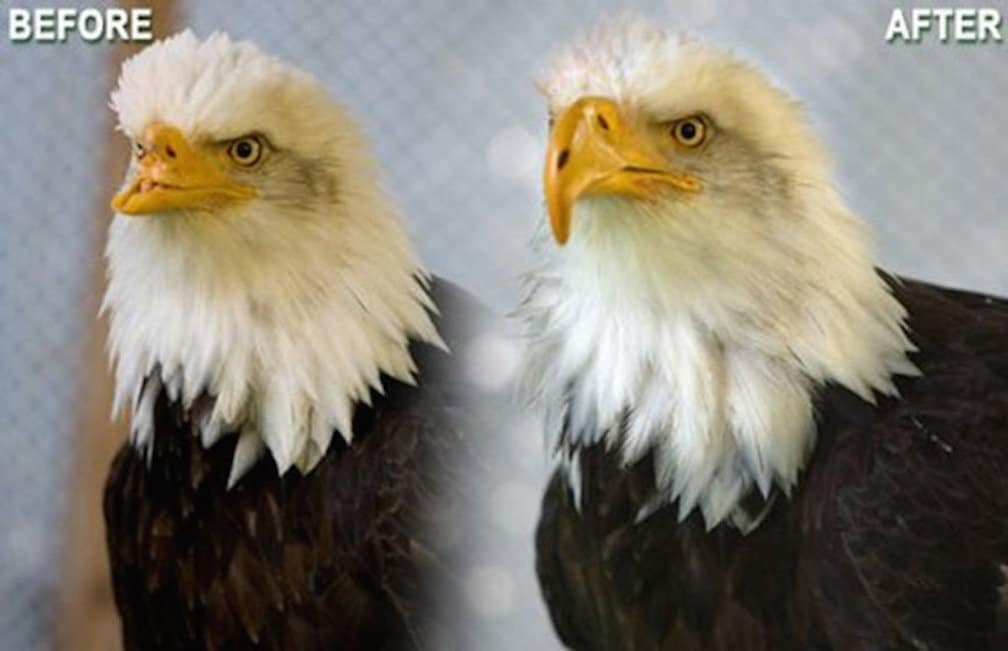 Looking at the striking bird of prey, you initially wouldn’t know that her beak was a prosthetic. She survived being shot by poachers but Beauty needed the help of humans to feed her – with her new beak, she can now feed for herself. 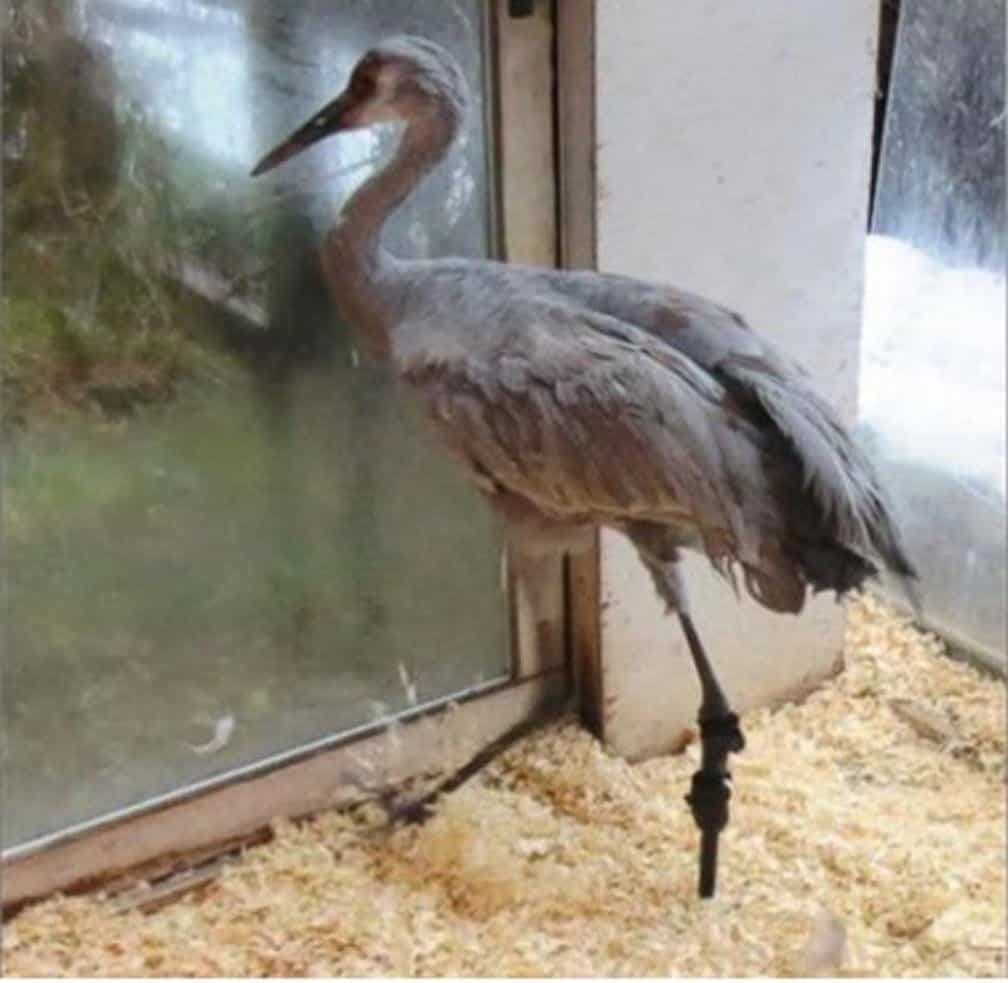 After an unfortunate incident on a golf course, Bunker, a sandhill crane, had to have one of his legs amputated. With the help of Orthopets in Denver, CO, Bunker is now able to fully use both legs and vets hope to return him to the wild very soon. 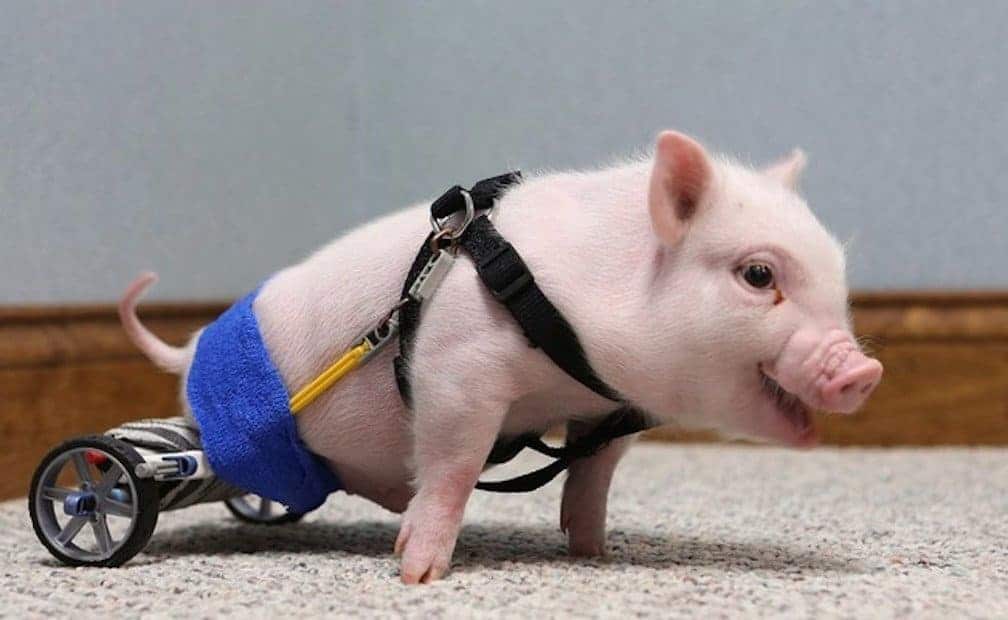 While plenty of animals have to have prosthetics specially made, vets had a far easier time getting this piglet moving. Chris P. Bacon was born without hind legs, so doctors built him a “wheelchair” with some parts of Kinex toys. 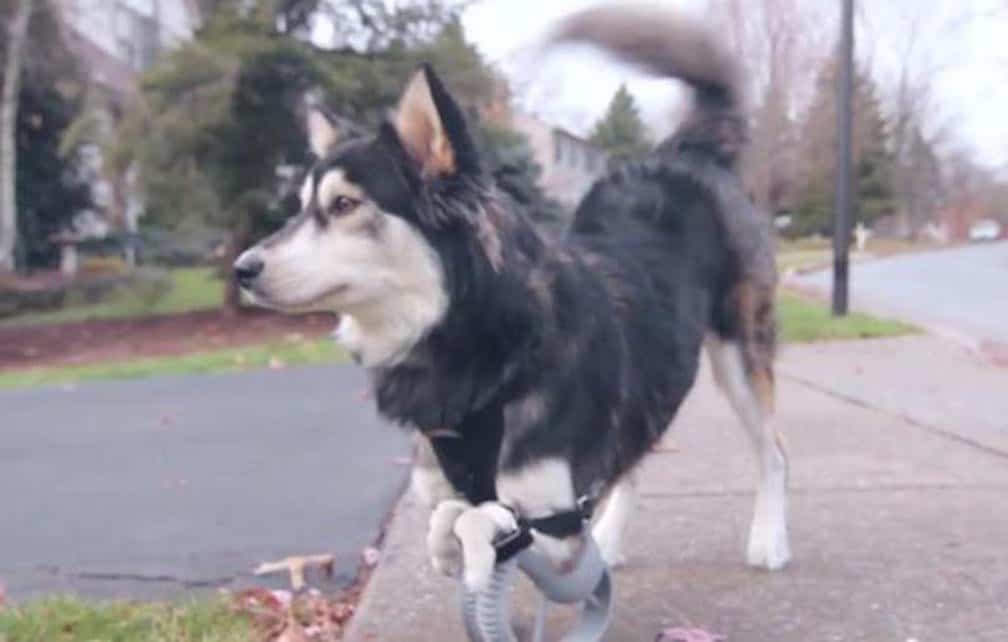 Being born with badly deformed front legs, Derby spent most of his early life in a doggy wheelchair. But after she noticed Derby’s limited mobility, his foster mother worked out a prosthetic design at her 3D-printing company – now he has almost complete mobility. 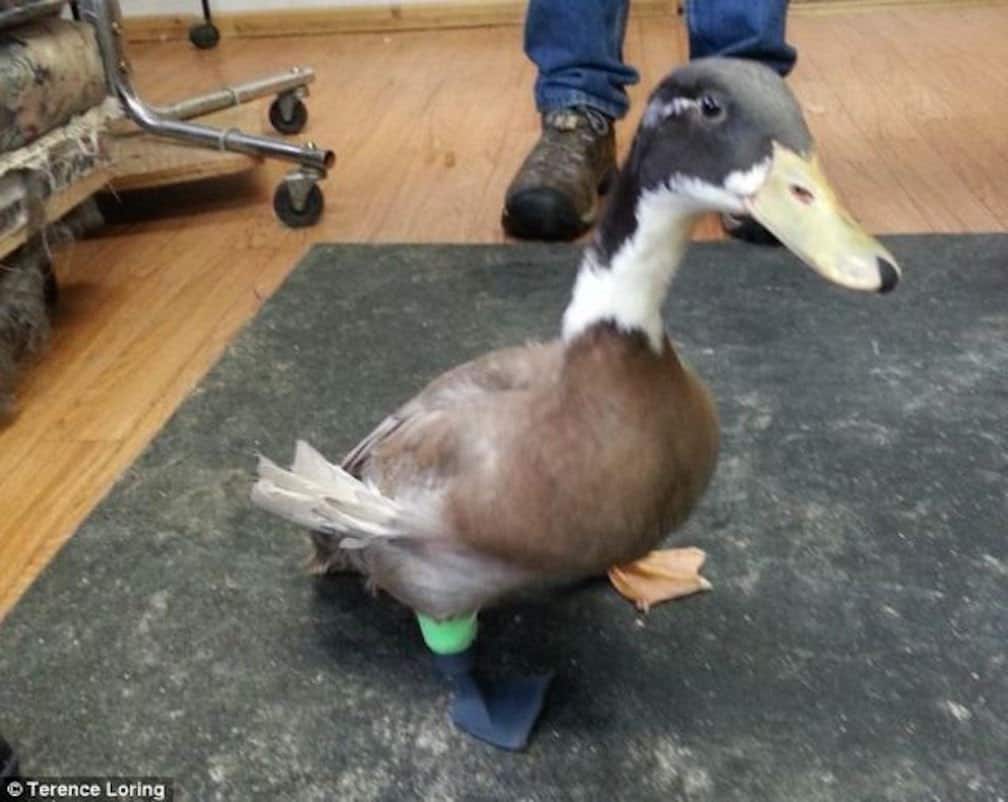 After being attacked by chickens, this tenacious duck lost his left leg. But thanks to the ever-expanding field of 3-D printing, Dudley now easily waddled around with a new leg. 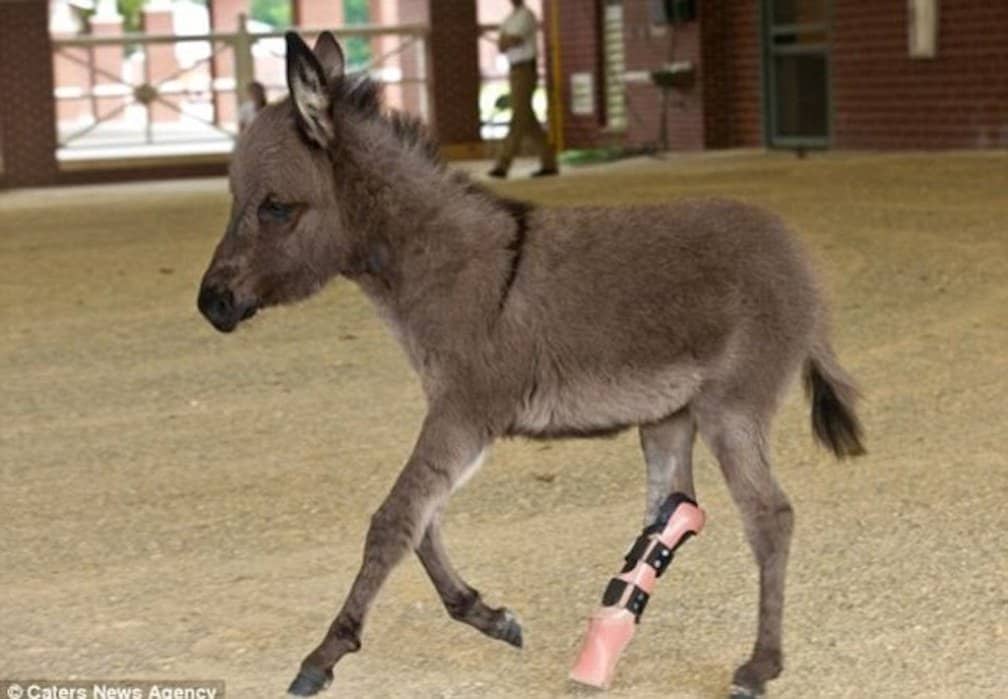 This adorable donkey had to have her right hind leg amputated after she was born with a birth defect. The prosthetic leg she wears not only helps her to run and jump like any other foal, but it has also given vets insight into how to help other similarly disadvantaged animals. 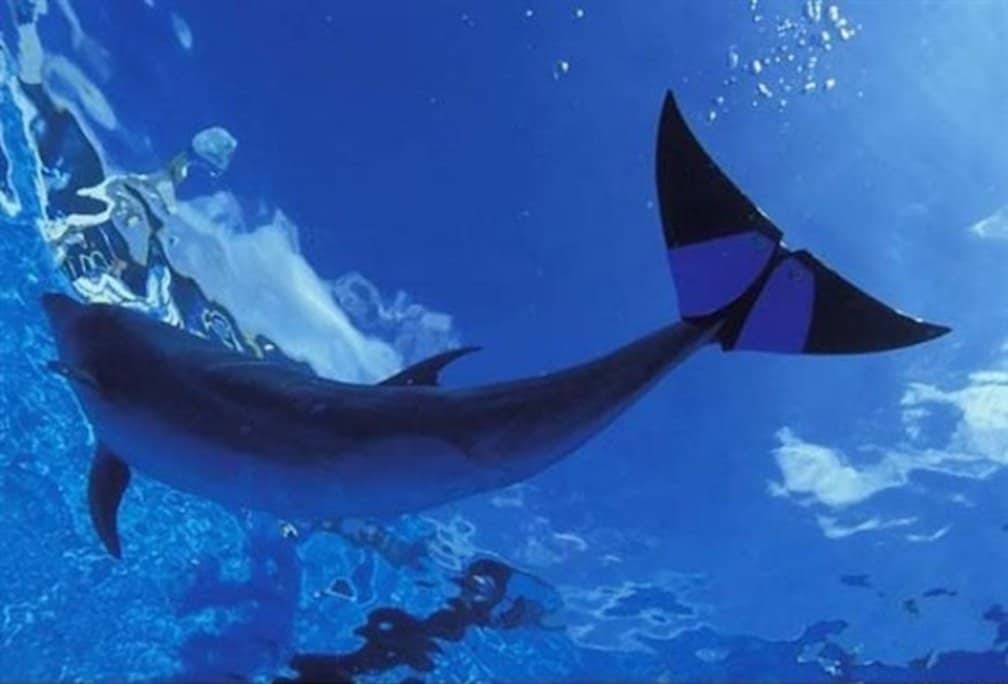 When Fuji the bottlenose dolphin was younger, she had a terrible disease that infected her tail fin, so most of it had to amputated. After vets enlisted the help of Bridgestone, Fuji now has an amazing prosthetic tail made of the same material as Formula 1 car tires. 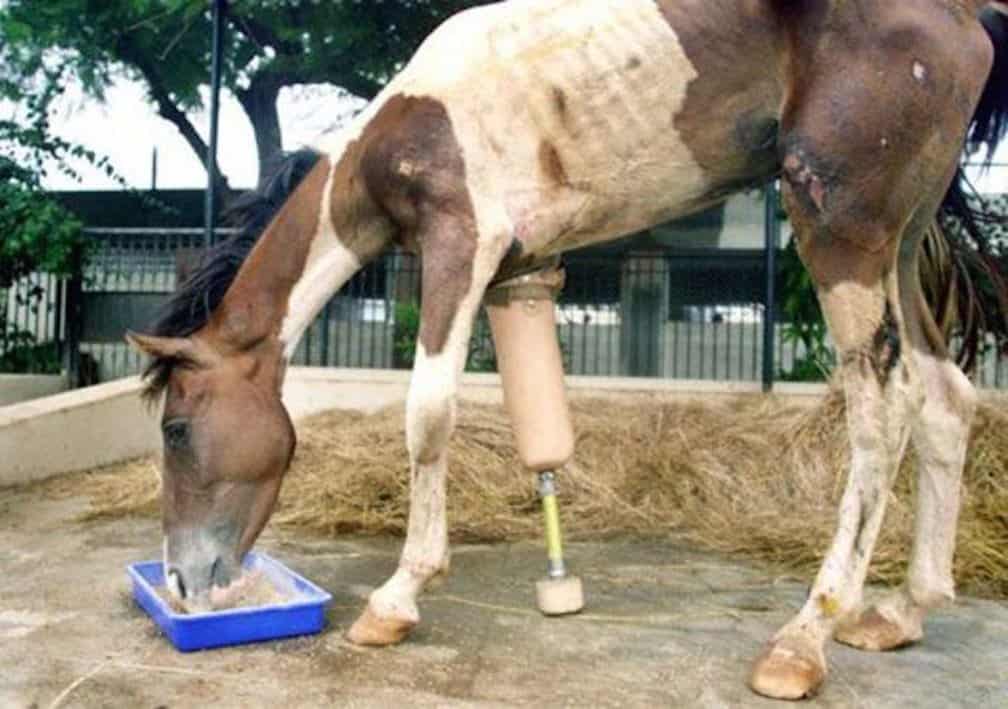 When he was found on the side of the road in India, Macho the horse was dying of an injured leg and bad malnourishment. While most animals are euthanized in such situations, doctors amputated the mangled leg and replaced it with a prosthetic. Now, Macho is back on the mend and feeling better everyday. 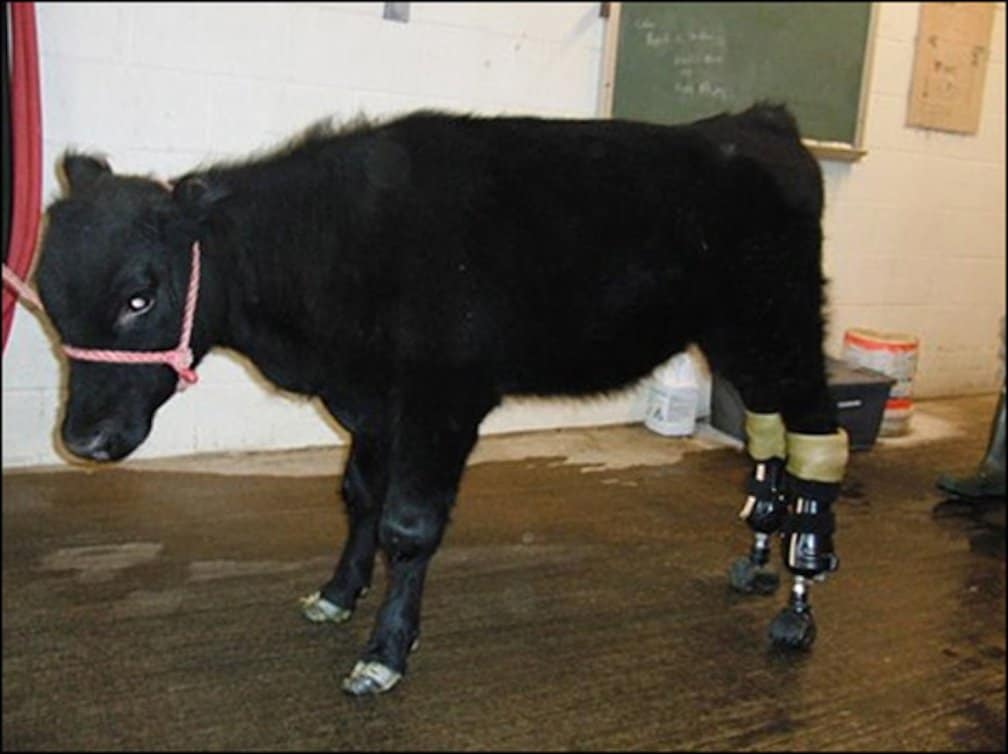 After this beautiful young calf lost her hind legs to frostbite, she became the first cow ever to have double prosthetics thanks to scientists at Colorado State University. She is now the prized new baby of her owner Nancy Dickinson. 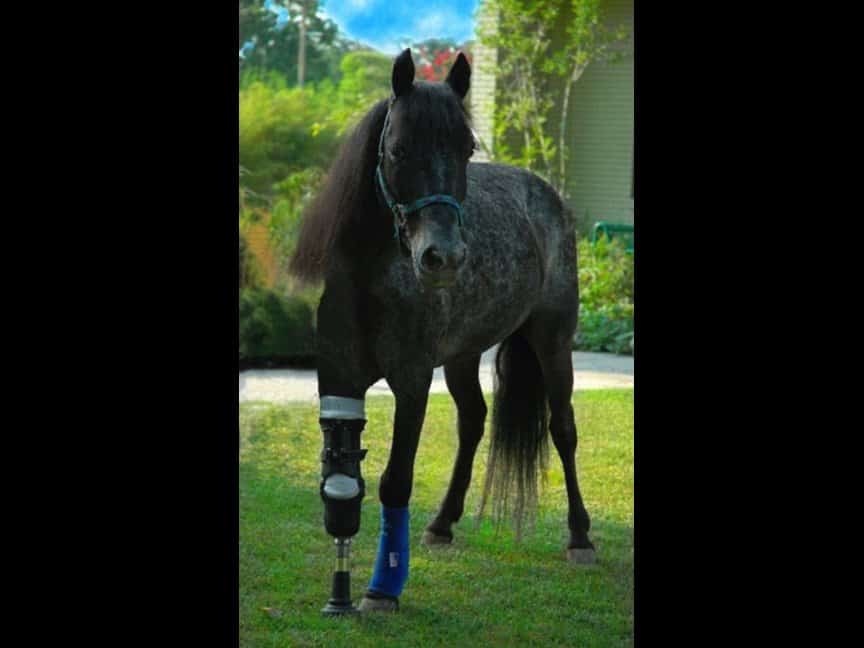 When Molly was mauled by a dog during the Katrina disaster, the vets that cared for her thought she was done for. While most suggested euthanasia, one surgeon pushed for amputation and prosthesis – she is now a symbol of hope for many still recovering in New Orleans. 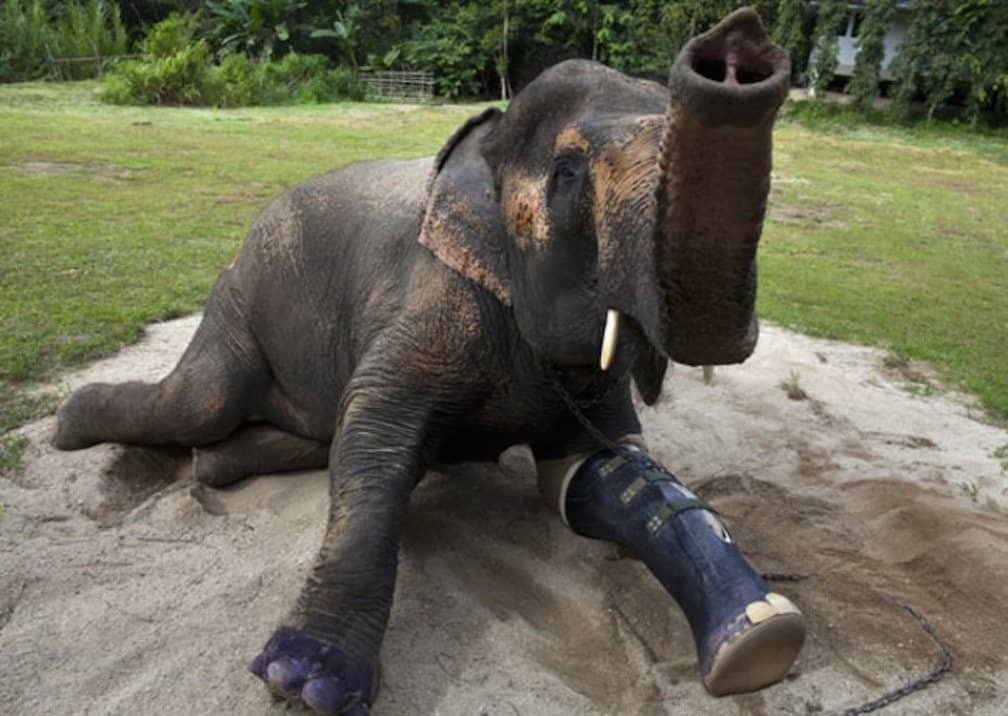 Most victims of war bombs are people, but not all of them. Motola lost her leg from a leftover landmine from the Burmese-Thai War in 1999. She had to wait ten years for it, but in 2009 she was given a prosthesis and has been noticeably happier ever since. 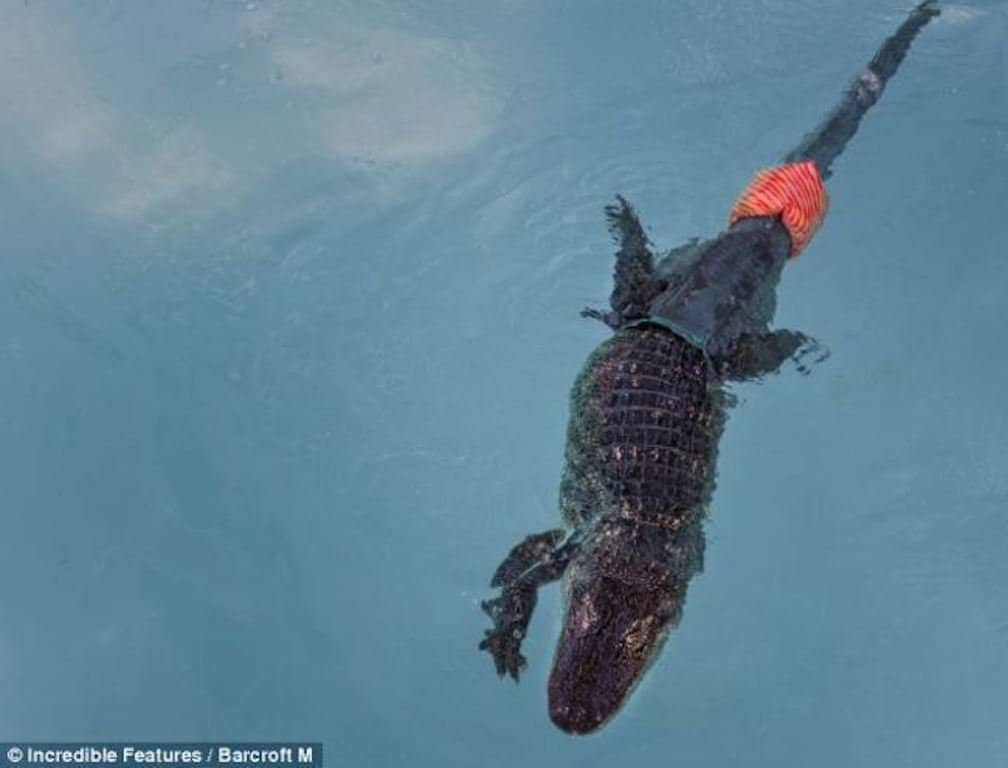 After what is believed to be a fight with another gator, Mr. Stubbs wasn’t able to swim properly due to his missing tail. But with his new silicon/latex tail and the help of a water wing, Mr. Stubbs is on his way to learning how to swim on his own again. 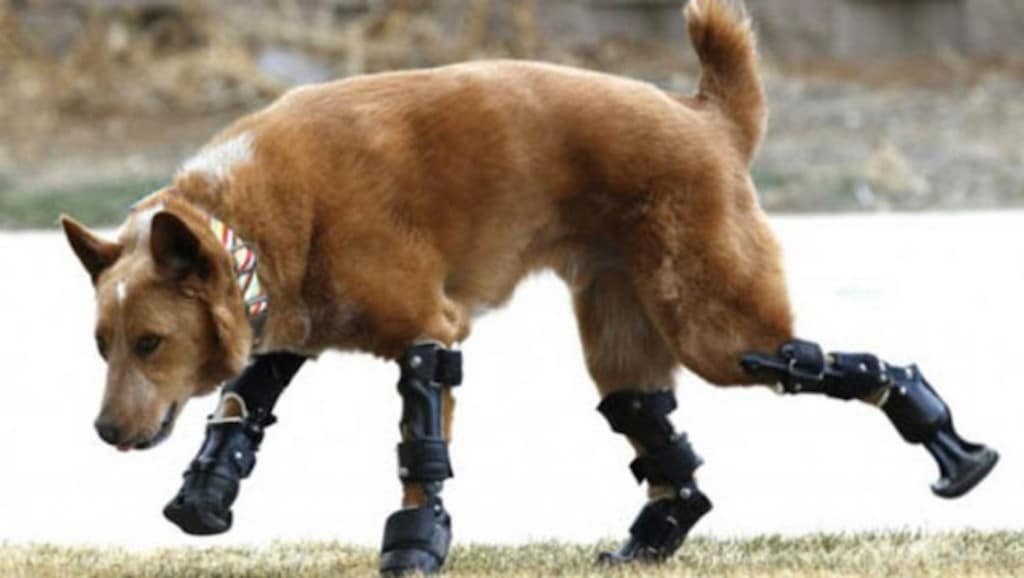 A victim of a hard winter, Nakio lost all four legs, part of his tail, and part of his nose from frostbite. His owner tried to save money for prosthetics but when the company Orthopets heard about the situation, they covered the costs and now the dog is living happily with four prosthetic legs. 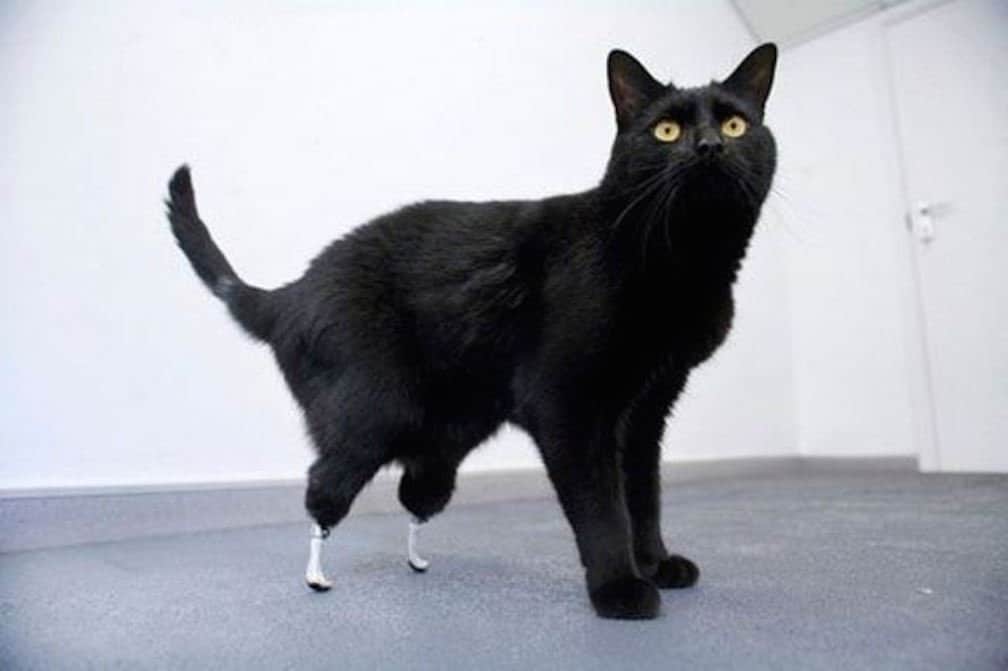 The adorable feline Oscar is the first cat in history to be fitted with prosthetic legs, which he lost after an unfortunate encounter with a combine. The artificial legs were attached to the remaining bone with screws, a method that doctors hope to one day try on people. Other than now being an indoor cat, nothing much has changed for Oscar. 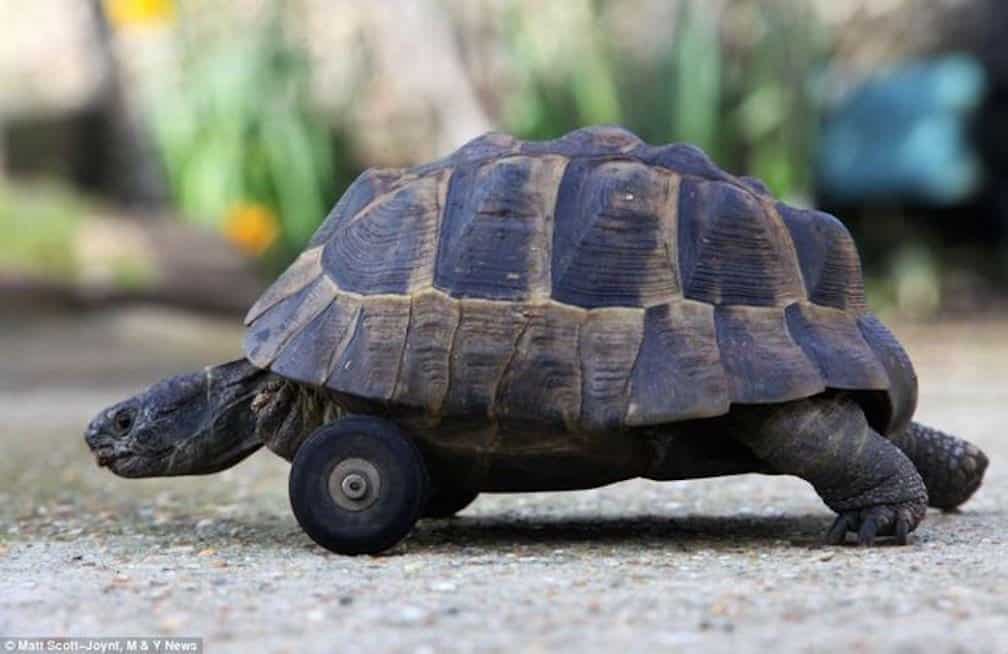 A man named Darren Strand found Septimus underneath his porch one day – the tortoise’s front legs had been gnawed off by rats during hibernation. He was taken to a vet where the remaining infected legs were amputated and model airplane wheels were attached in their place. 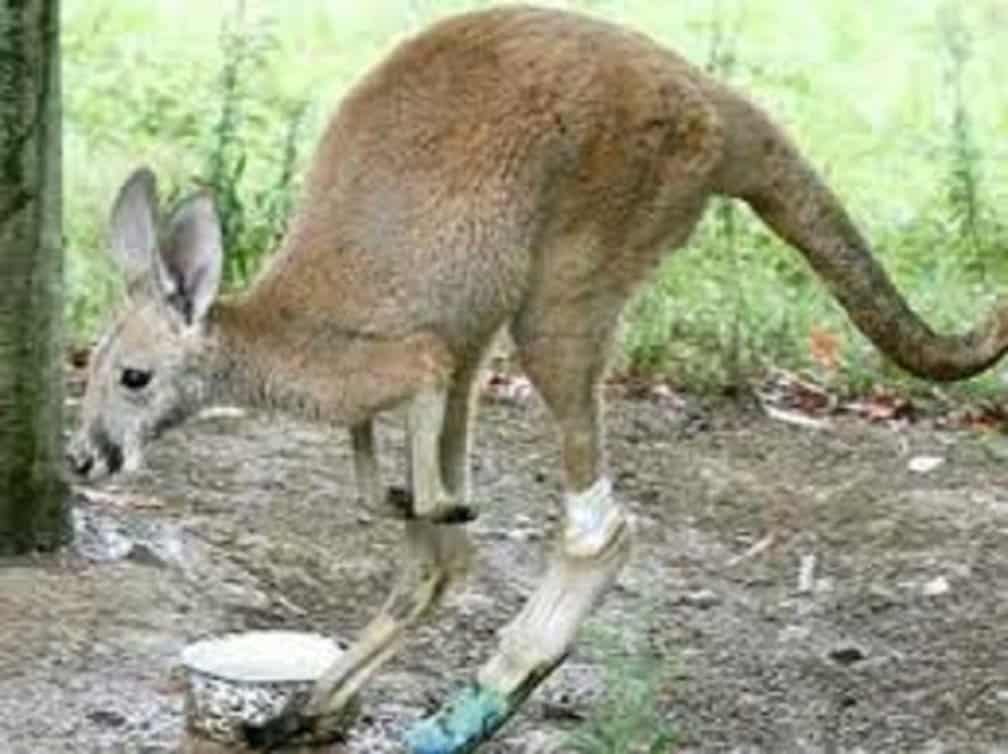 Vets carrying for Stumpy knew the kangaroo couldn’t survive with just one leg. As such, a prosthetic was designed to help her be as normal a kangaroo as she can be while living out the rest of her life in a kangaroo sanctuary. 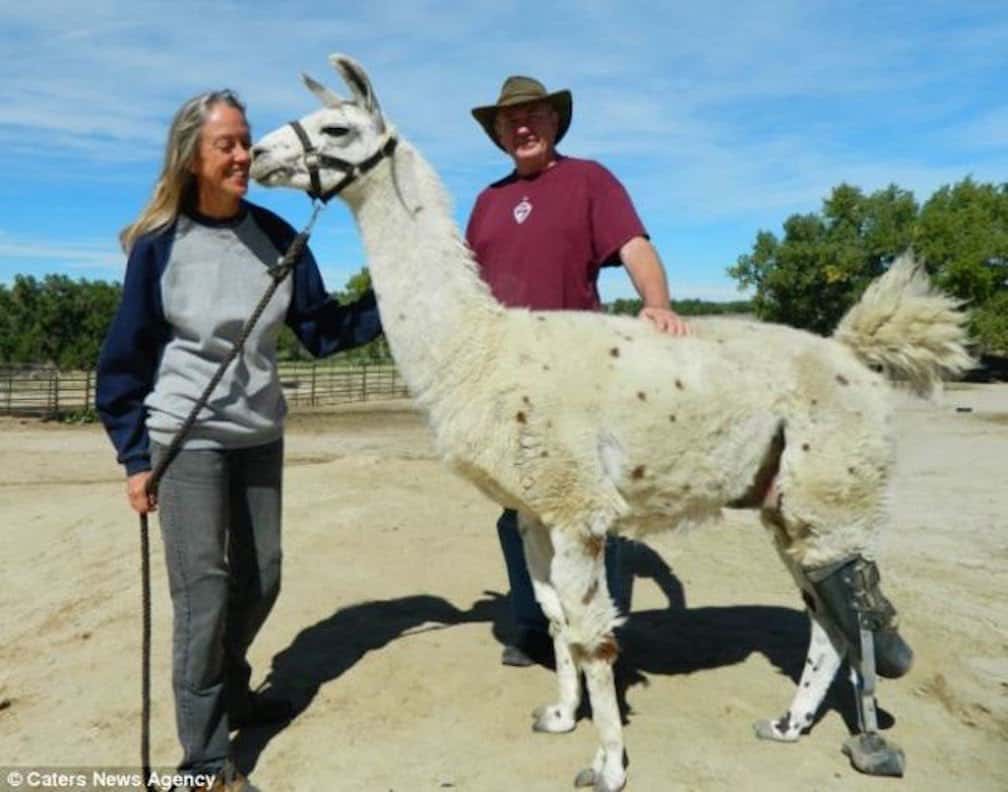 This llama was just a malnourished stray with a mangled hind leg in need of amputation when Marc Field and Sherry Hughes found it wandering near their ranch. After saving money and getting it back to good health, Tripod now lives happily with the other animals on the farm. 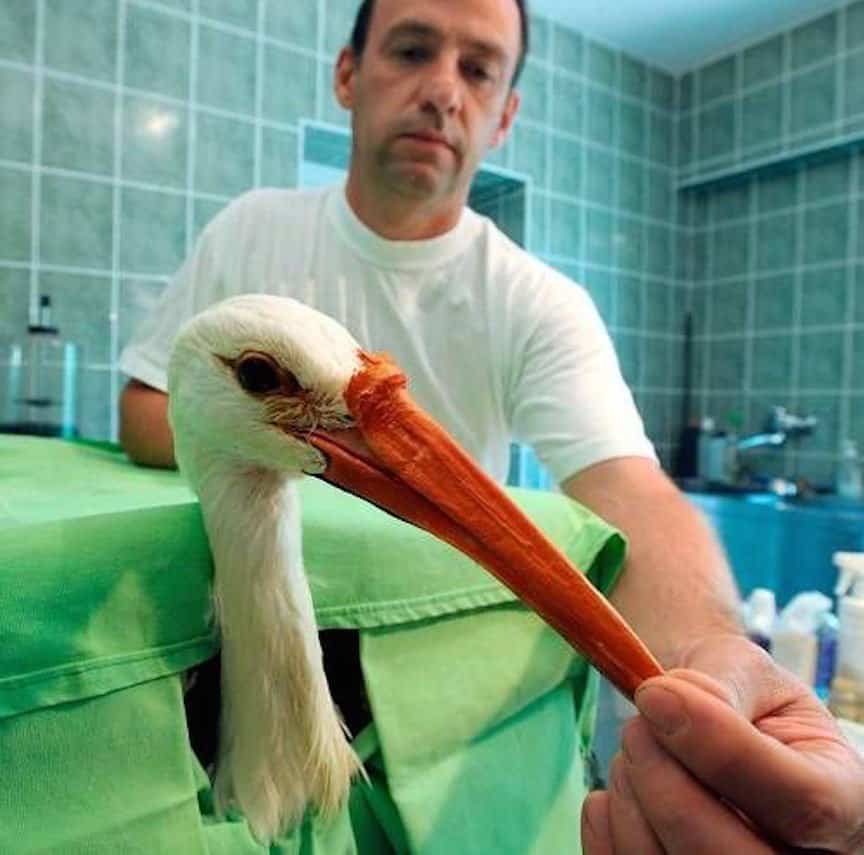 In Hungary, this stork was found with a damaged beak after a believed encounter with a wall or window. With the help of a doctor who specialized in dental prosthesis, the bird was fitted with a wax beak. Vets are hopeful that the bird will be returned to the wild soon. 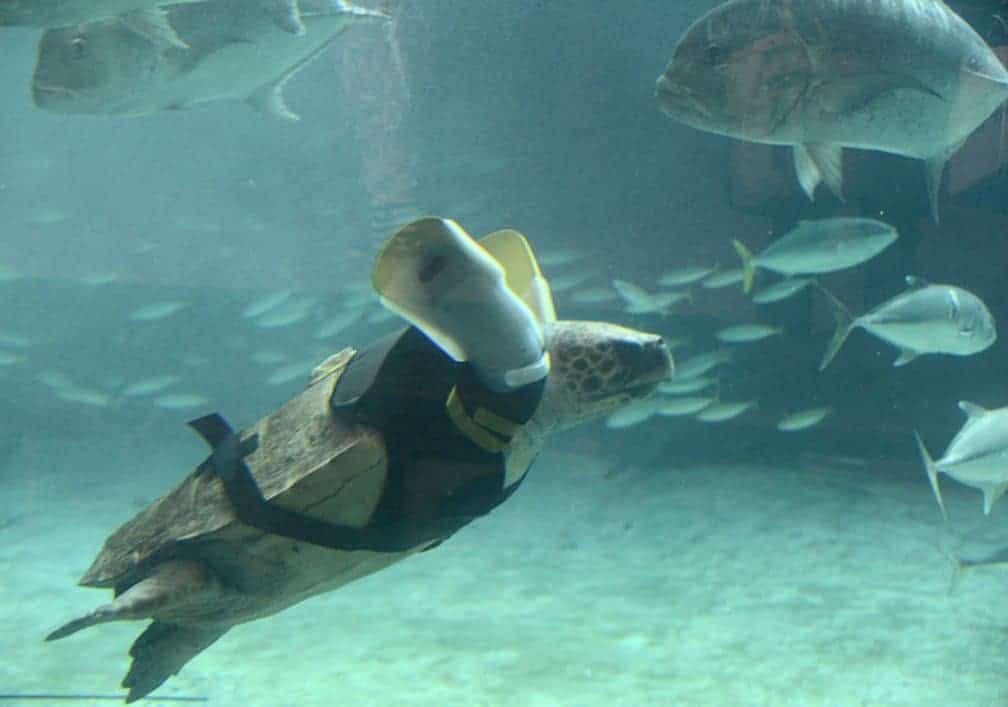 When this loggerhead turtle was discovered by fishermen, she had part of one flipper from being tangled in the net she was found in and and part of another from an apparent shark attack. Now outfitted with a vest that lets her swim like a fully functioning turtle, Yu Chan lives a happy life at the Suma Aquiline Park in Japan.