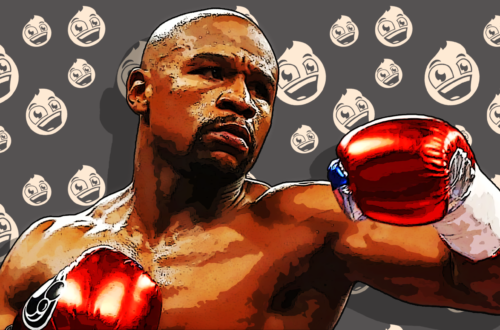 Known for his hard-hitting punches and sensational pay-per-view attraction, Floyd Mayweather will forever go down as the greatest boxer of all time. Besides his undefeated and perfect boxing record of 50-0, Floyd Mayweather is also the richest boxer so far.

This begs the question, how much exactly is Floyd Mayweather’s net worth? Well, it seems Floyd Mayweather knows a great deal about pulling numbers, given the astonishing size of his earnings over the years.

What Is Floyd Mayweather’s Net Worth?

Floyd Mayweather’s net worth is a whopping $450 million, though there’s more to this story than meets the eye. For instance, Floyd Mayweather has made claims that his earnings have surpassed the $1.2 billion mark.

This is not surprising if you consider that at the peak of his career, Floyd Mayweather’s earnings were so hefty he remains the highest-paid boxer. It’s satisfying to know he has such a fitting nickname since he’s popularly known as Floyd ‘Money’ Mayweather. If you check previous years, you’ll notice that Mayweather was regularly featured on the Forbes list of highest-paid athletes.

All in all, Floyd Mayweather is one professional with a highly respected net worth.

How Does Floyd Mayweather Earn Money?

You might be wondering just how Floyd Mayweather has managed to amass so much wealth throughout his boxing career. The former prolific boxing champion managed to create a widely recognized brand that made him a household name in the sports industry.

Floyd Mayweather has won numerous major world championships, and he’s been recognized as the Fighter of the Decade for the 2010s. His prowess in the boxing ring earned him a ton of prize money. He also has a number of high-profile fights that led to some of his biggest paydays.

For instance, Floyd Mayweather’s career earnings reportedly include $280 million from fighting Conor McGregor and winning. The Floyd Mayweather Jr vs. Manny Pacquiao – a most anticipated fight – earned him around $240 million, while he got $100 million for fighting Logan Paul in 2021’s exhibition bout.

Perhaps the most notable thing about Floyd Mayweather’s career earnings is his ability to attract a staggering amount of pay-per-view buys, from which he had a 50% cut. His PPV revenue has contributed significantly to his net worth.

Today Floyd’s monthly earnings amount to roughly $300 million. The money comes from exhibition bouts and his business ventures. Floyd has a long list of businesses, including an adult club in Vegas called Girl Collection, a roller skate park, a Nascar racing team, and more. Mayweather has also invested in a number of stock investments. He owns a large collection of luxury cars and multi-million dollar mega-mansions in Beverly Hills, Las Vegas, and Miami Beach. If you’re wondering how many private jets Floyd owns the answer is just one.

What’s the Story Behind Mayweather’s Success?

Today, we can freely speculate about Floyd’s career earnings, but there wasn’t much to write about during Mayweather’s early life. The boxer grew up in Michigan, where destiny had already made its claim on him, given that his father, Floyd Mayweather Sr, and uncles are all former boxers.

At birth, Floyd Mayweather Jr was given his mother’s name Sinclair, which later changed. Mayweather attributes his success to his maternal grandmother, who encouraged him to keep boxing. Though the family was poor and had never experienced hands-on parenting, Mayweather managed to navigate the ups and downs and come out on top years later.

He used boxing as an outlet until it was all he could focus on, which prompted him to drop out of school. As he grew up, Mayweather eventually kickstarted his amateur boxing career, where he quickly became known for the effective defensive techniques he learned from his father and uncles. He went on to win a bronze medal at the 1996 Olympics, which was only the beginning for this world boxing champion. Now Floyd Mayweather’s net worth continues to flourish.

Floyd Mayweather’s net worth and sky-high success are not the only fascinating things about him. Here are more fun facts that explain Mayweather’s popularity.

What’s Next for Floyd Mayweather?

Although Floyd Mayweather retired on August 26, 2017, he still manages to generate a considerable amount of press due to his sheer star power. His most recent accomplishment is induction into the International Boxing Hall of Fame, which Mayweather admits is one of the best highlights of his profession.

It’s our hope that Floyd Mayweather’s net worth keeps inching up as he unlocks higher levels of success. Here’s to breaking more new records!

What is Floyd Mayweather Net Worth?

How much money does Floyd Mayweather earn?

How tall is Floyd Mayweather?

How old is Floyd Mayweather?

When is Floyd Mayweather birthday?