Is your perception of the 19th and 20th centuries somewhat grainy and distorted? If so, you’re not alone. The photographs of the era place an indelible stamp upon our consciousness, forever miring the times in blurry obscurity. But what happens when talented artists restore historical photos by adding a little color? They create a stunning exhibition of how things may have actually looked. When they restore photos of everyday life, they give us a fascinating glimpse into what life in the past was actually like, more vivid and relatable than ever before. 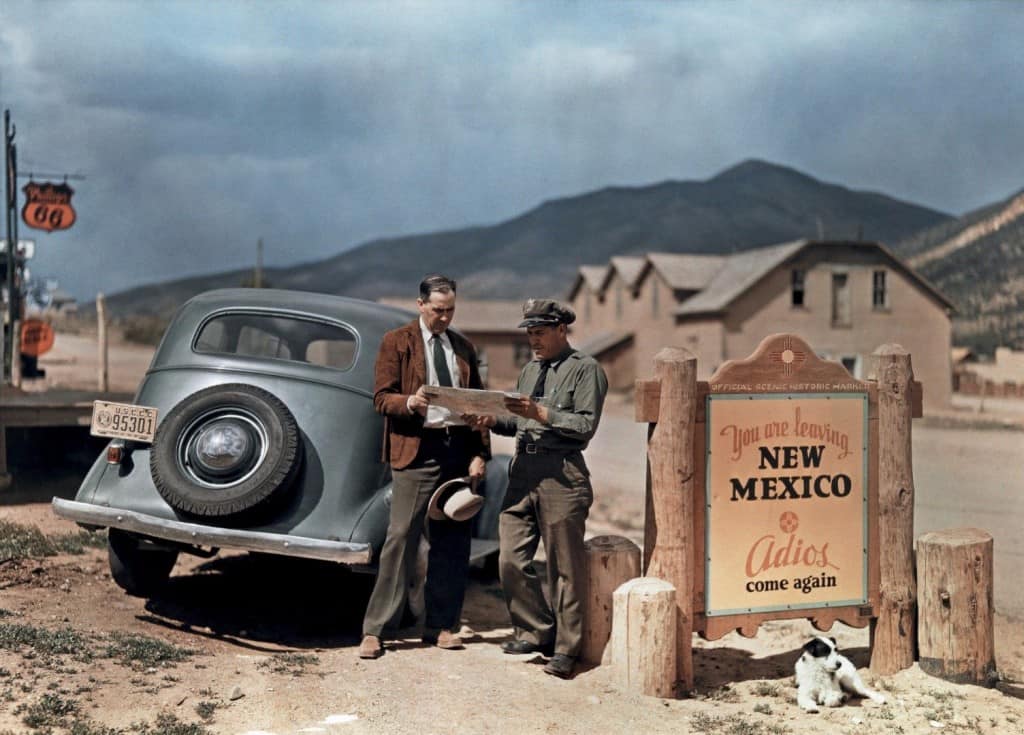 Nothing says “America” like the open road. In this 1939 photo, a motorist stops at the New Mexico state line to ask for directions from a state trooper.

This was an especially exciting time in America. The auto industry was booming and car culture was exploding nationwide. By 1939, Americans had only been driving for twenty five years. That’s about as long as people have had access to the internet. 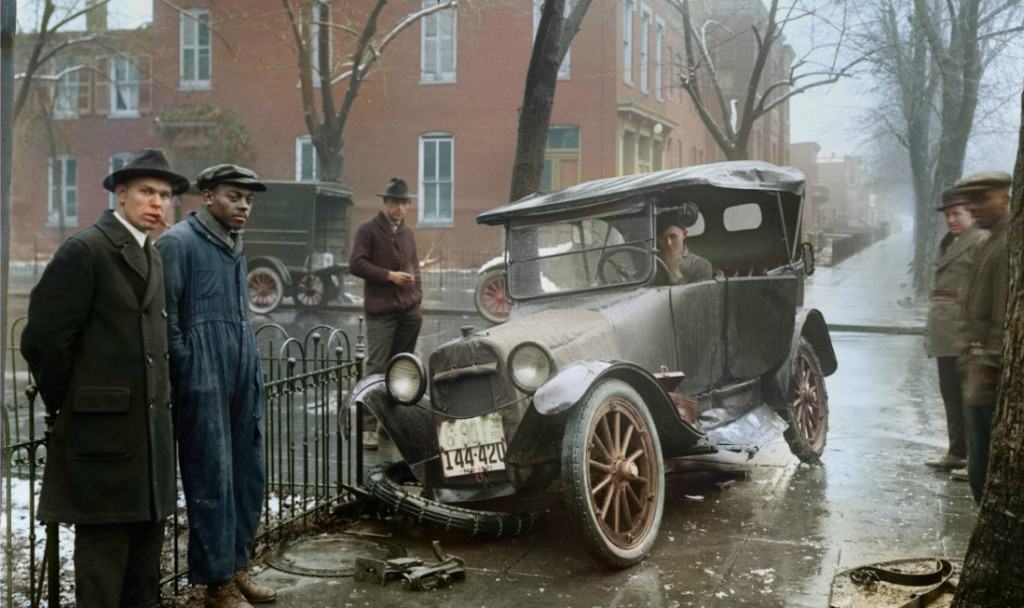 Imagine a time when a horse and buggy was about as outdated as a flip-phone is today. That was America in the infancy of the motor age. This accident looks pretty tame, but make no mistake – the car accidents of the time could be pretty nasty. Inexperienced drivers and less road regulations led to frequent mishaps on the road. You might assume the introduction of motor vehicles made the streets more dangerous, and you’d be right – sort of. It’s hard to know precisely how frequent pre-car traffic accidents were, but sources report horse-drawn carriages were regularly involved in accidents, including high-speed collisions. The precision of a motor vehicle probably looked pretty appealing compared to the unpredictable nature of animal-powered travel. 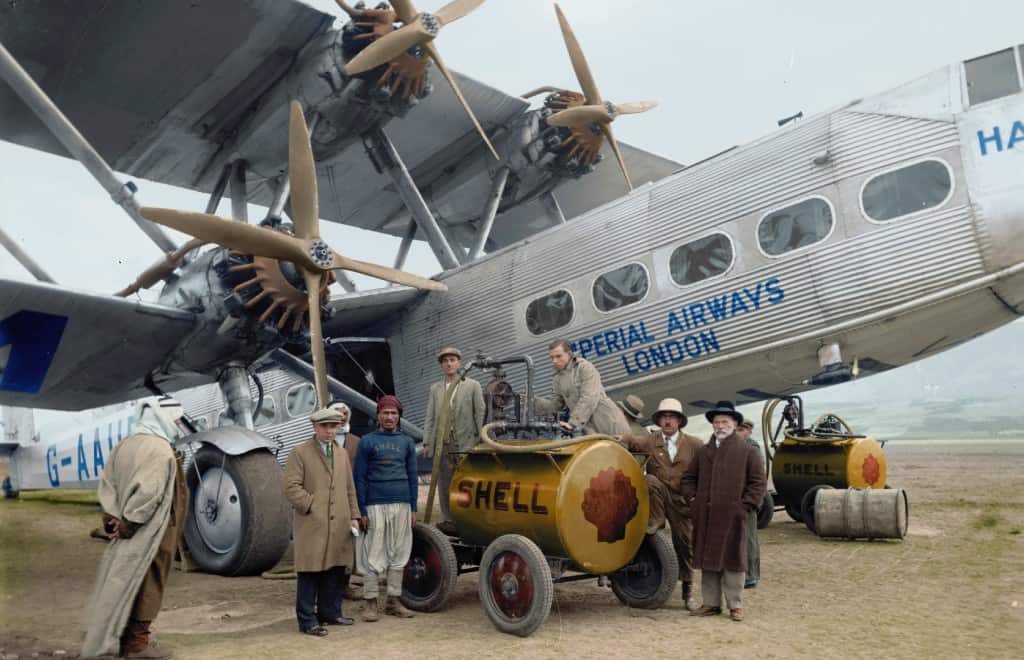 Want to go a little further? In the 1930’s, you could hop on a passenger plane like this one. But be warned, air travel in those days was quite a bit different than it is now. For starters, there were no massive jumbo jets that could fly half-way around the world without stopping to refuel. 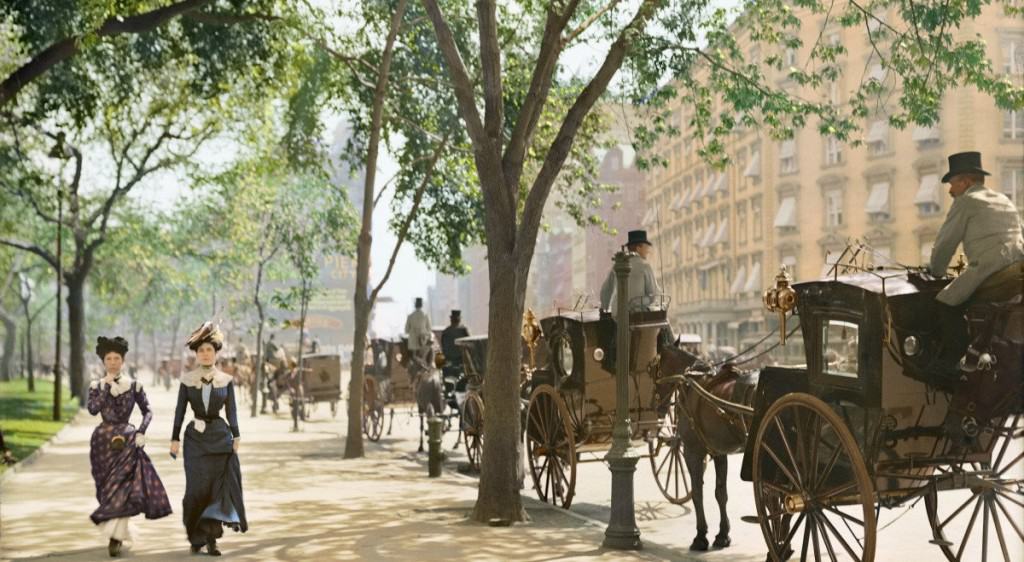 If you wanted to hail a cab in turn of the century New York, this is what you’d get. Horse drawn carriages were the primary mode of urban transportation, but there were other ways to get around, including bicycles, trains, and even steam-powered predecessors to modern automobiles. 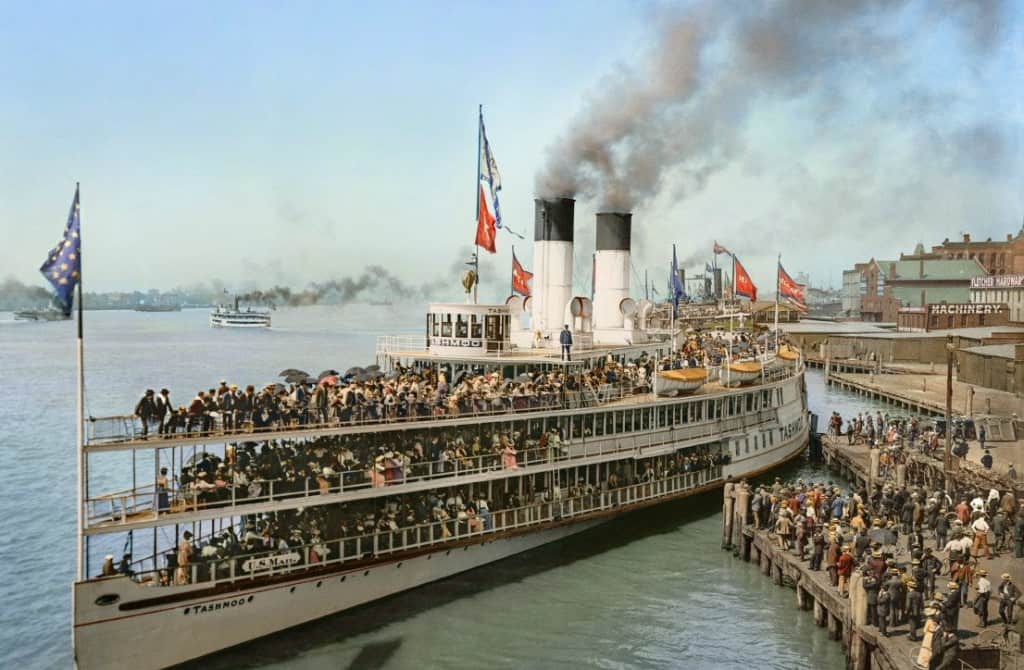 What about traveling over water? Steamboats like The Tashmoo (pictured) could cut through a lake or traverse a river in no time, all the while offering passengers all the luxuries of a pleasure cruise. 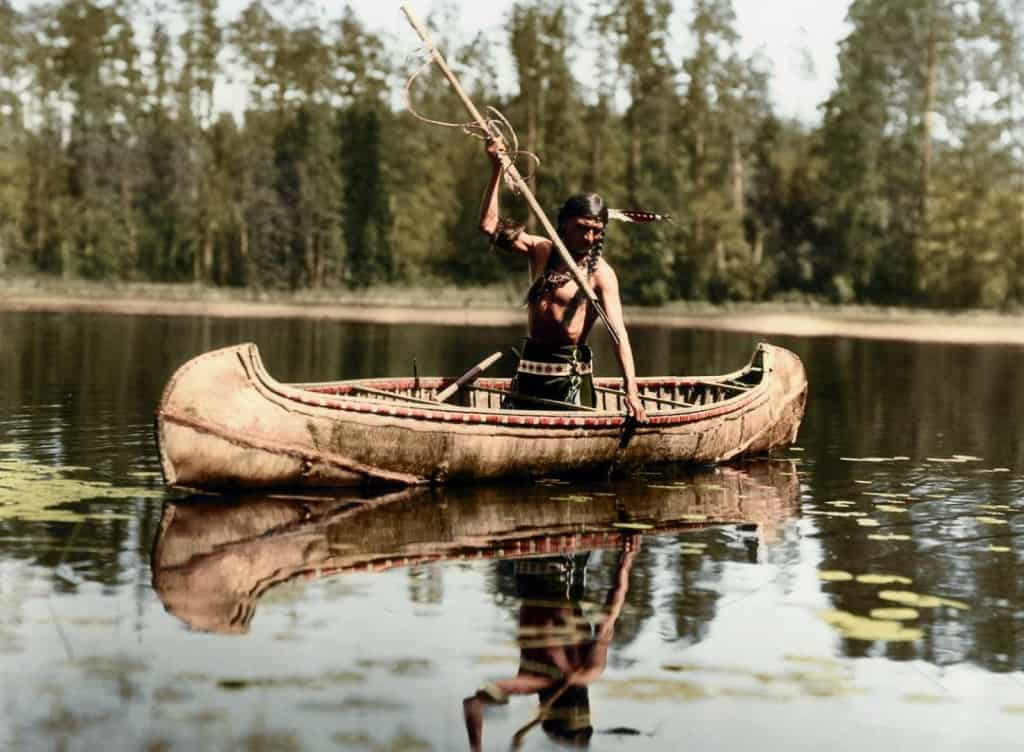 This boat is a tad smaller, but you need a small, quiet vessel when practicing the fine art of spearfishing. The man pictured belonged to the Ojibwe, or Chippewa people, who inhabited territory along the Great Lakes of Michigan.

Klamath Chief Praying To The Spirits Of Crater Lake (1923) 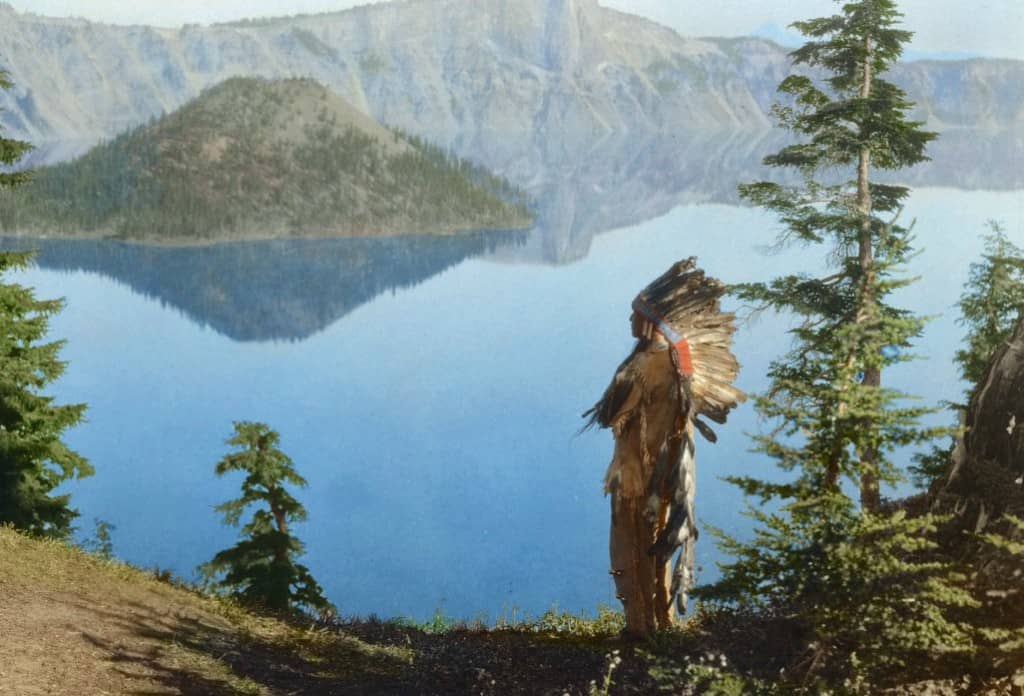 Another Native American, this time of the Klamath people. He is pictured here praying to the spirits of Crater Lake in Oregon. 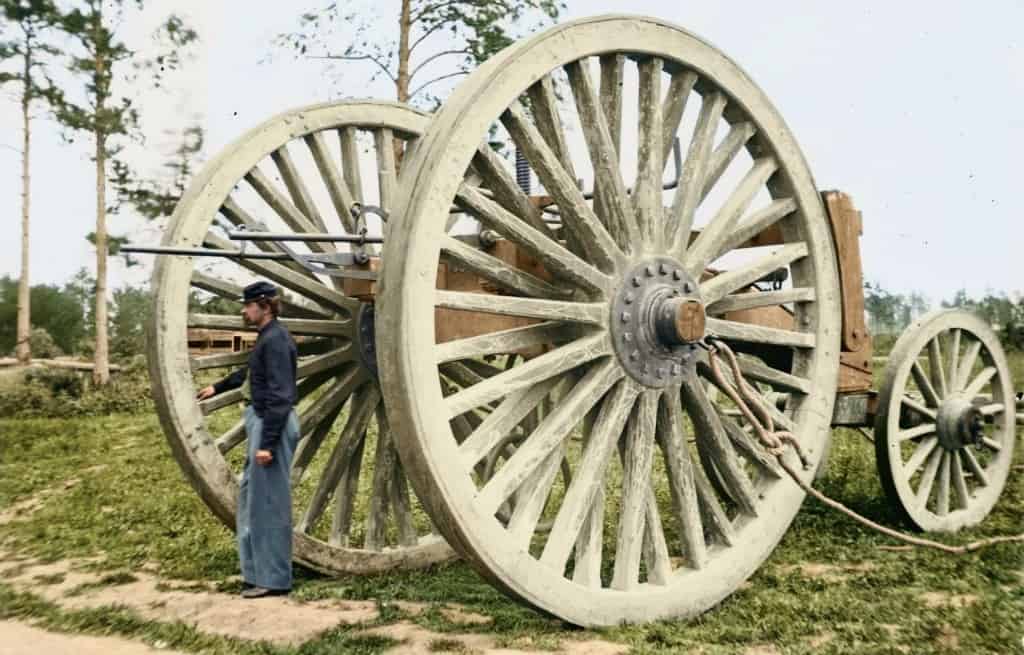 The oldest image in this list, it was taken near the end of the American Civil War. It depicts a Union soldier standing next to a huge sling cart, which was used to remove captured artillery. 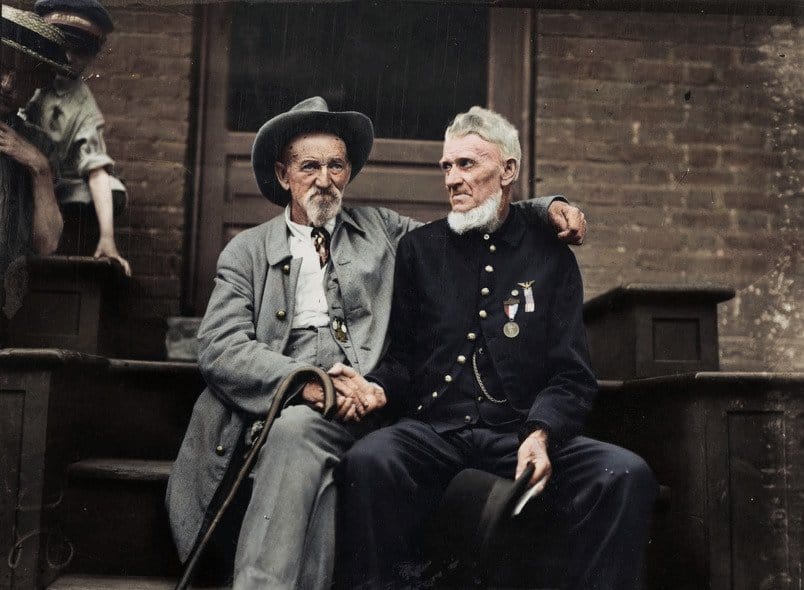 Forty eight years after the end of the civil war, two opposing veterans forgive each other at a formal ceremony.

A British Veteran Sells Matches On The Street (c.1930) 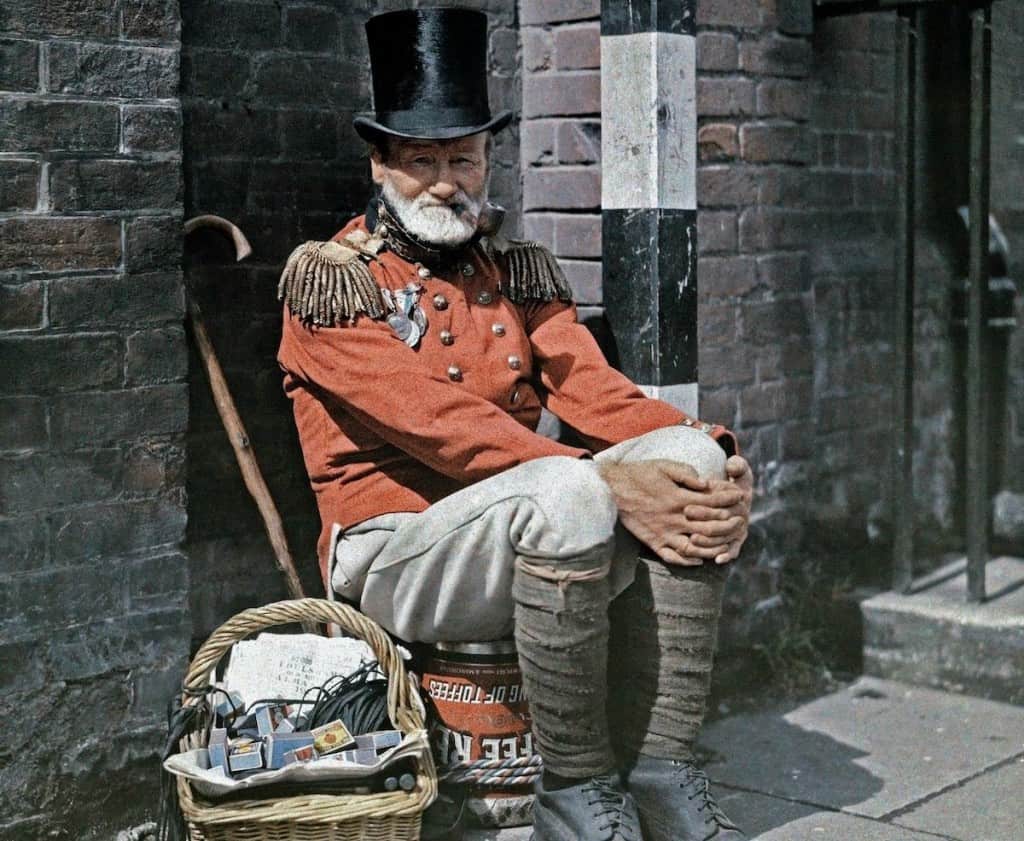 No, that isn’t Robin Williams. It’s actually a British veteran selling matches on the streets of Canterbury, circa 1930. 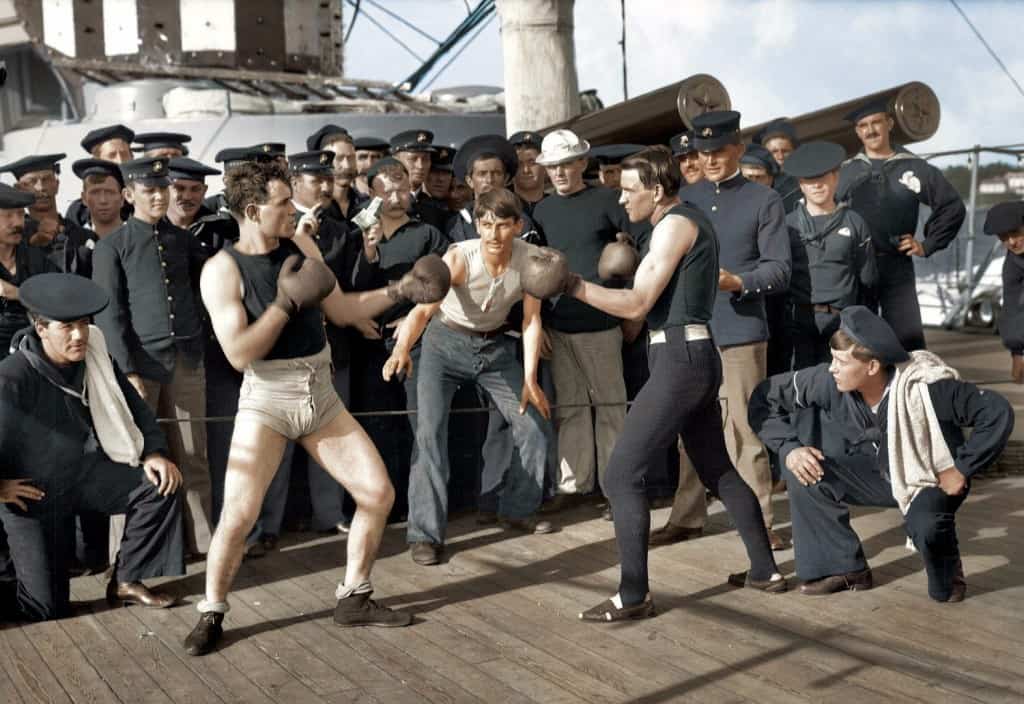 Here are some military men in their prime. Life as a U.S. Navy sailor could get tedious, so what better way to relieve some tension than beating someone’s face in until you both feel better? 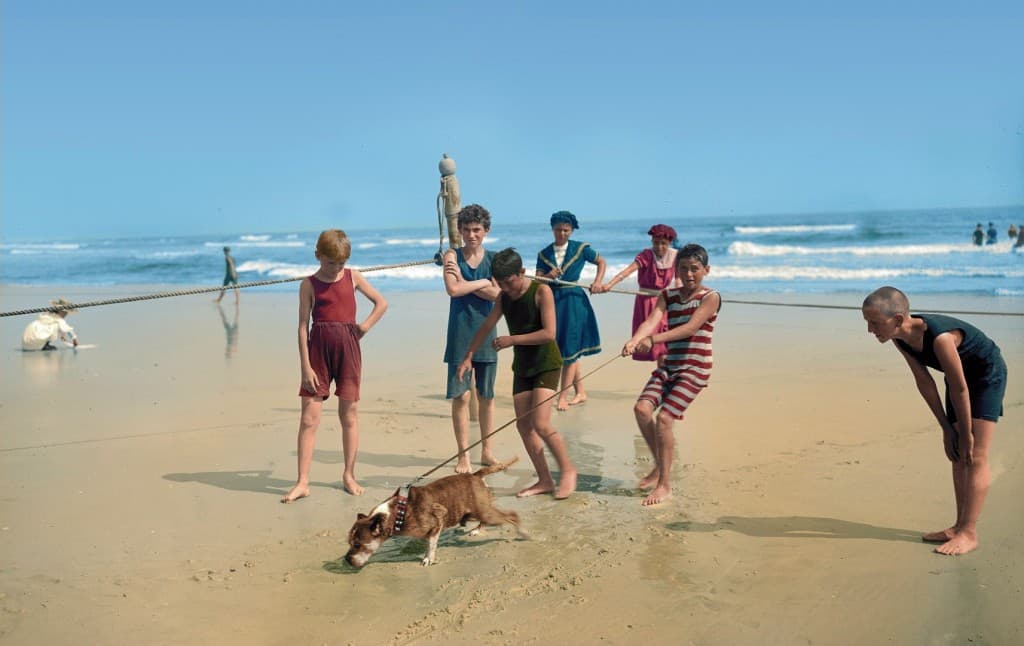 This photo just exudes Americana. A group of boys wrangle their bulldog while enjoying the Coney Island beach, one of America’s most popular summer destinations at the turn of the century. 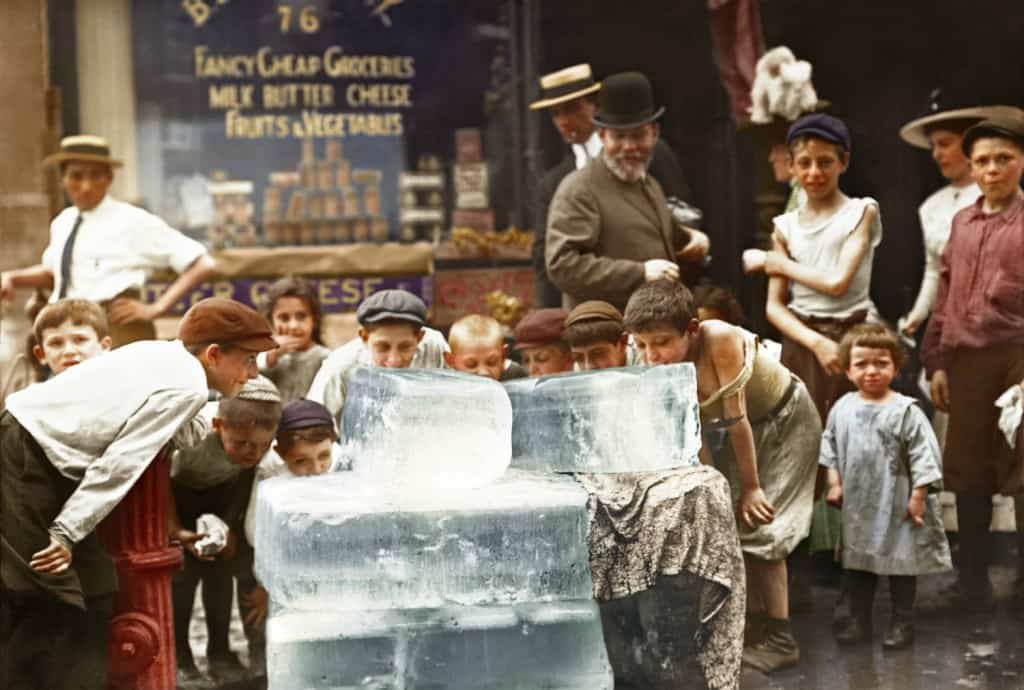 Coney Island was one way to beat the heat, this was another. Hey, you try wearing formal clothing all day with no air conditioning. 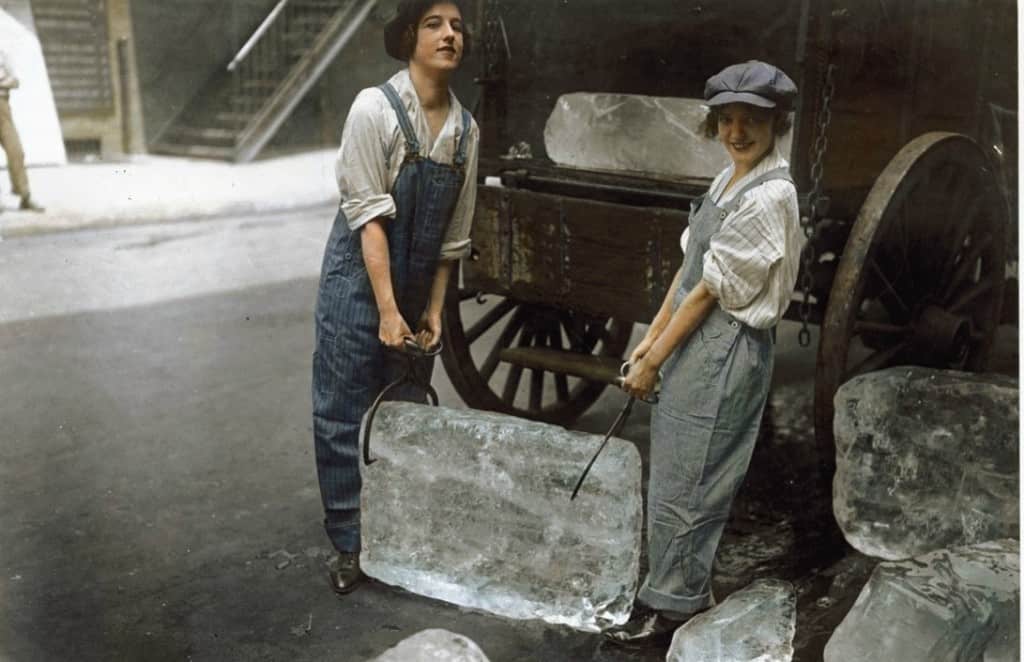 Where did all that ice come from, anyway? Before consumer grade refrigerators, ice actually had to be harvested or frozen in one location and shipped to a business or home. Ice deliveries were a daily service, just like getting the paper. 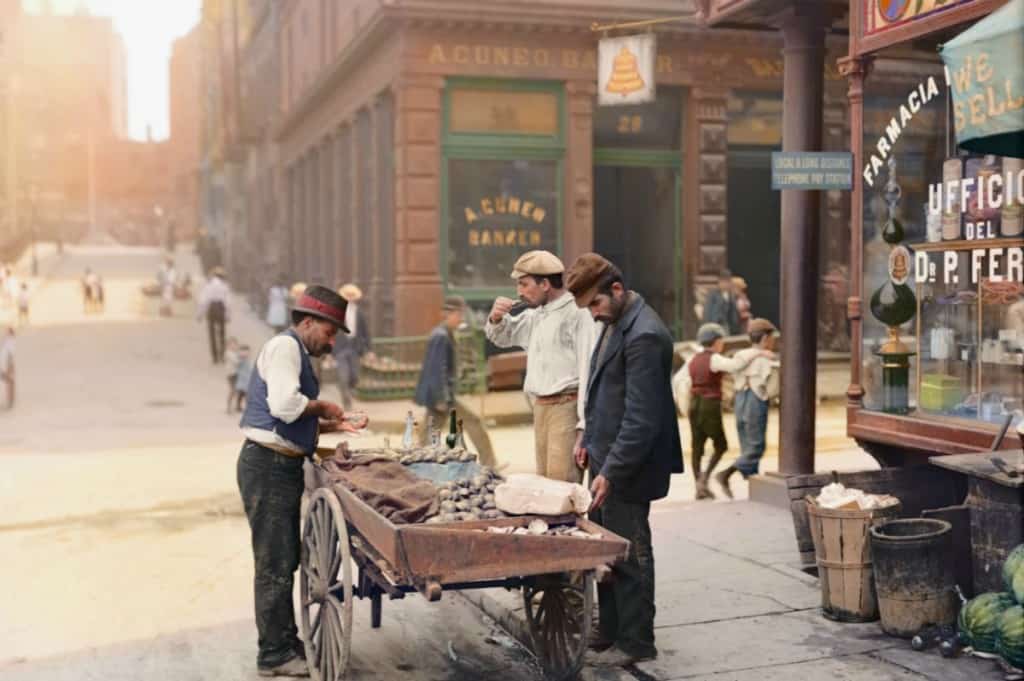 Hungry? Maybe a fresh clam will hit the spot. Or, if you’re a fan of Chinese food, you might try a new dish called Chop Suey. It was all the rage in Chinese restaurants at the turn of the century, though it isn’t a traditional food in China. Even a hundred years ago, Americans preferred the deliciously inauthentic version of Chinese food they eat today. 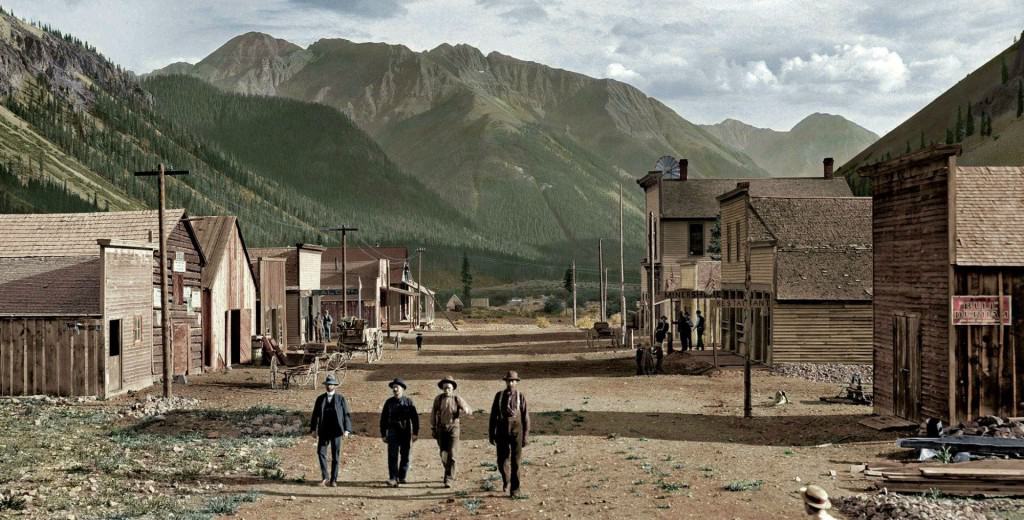 If you lived in a town like Eureka, your food options would be a bit more limited. Settlers in these towns had to rely on whatever livestock and crops could survive in the area. If you wanted a change of pace, you’d likely face a multi-hour horse ride just to get to the next town over. Everything changed when railroads connected the country, but people still lived in isolated frontier towns for decades afterward. 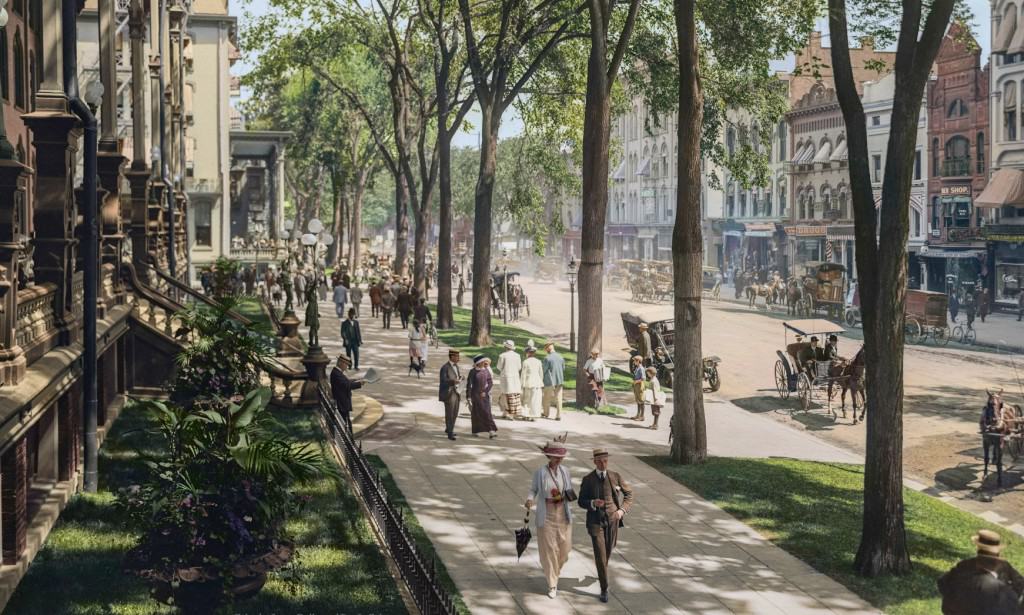 This picture of the affluent Saratoga Springs was taken in 1916, when the city was a well-known destination for gambling and leisure. 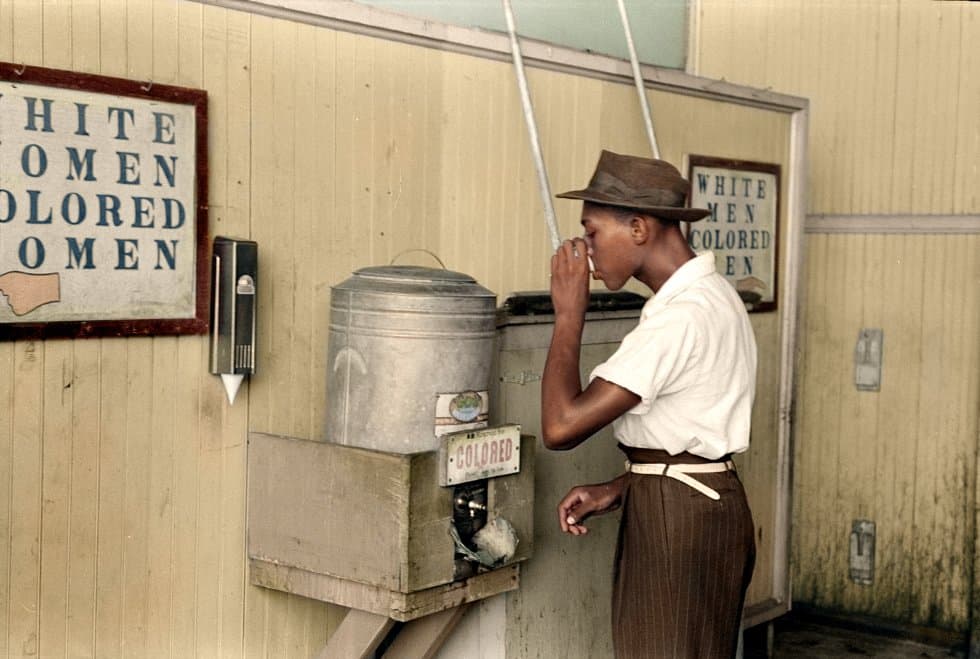 Photos like these are a sobering reminder that there’s no time like the present. Daily life under segregation consisted of navigating separate bathrooms, water fountains, seating, and even movie theaters for whites and non-whites. Many business owners wouldn’t allow African-Americans inside their businesses at all. 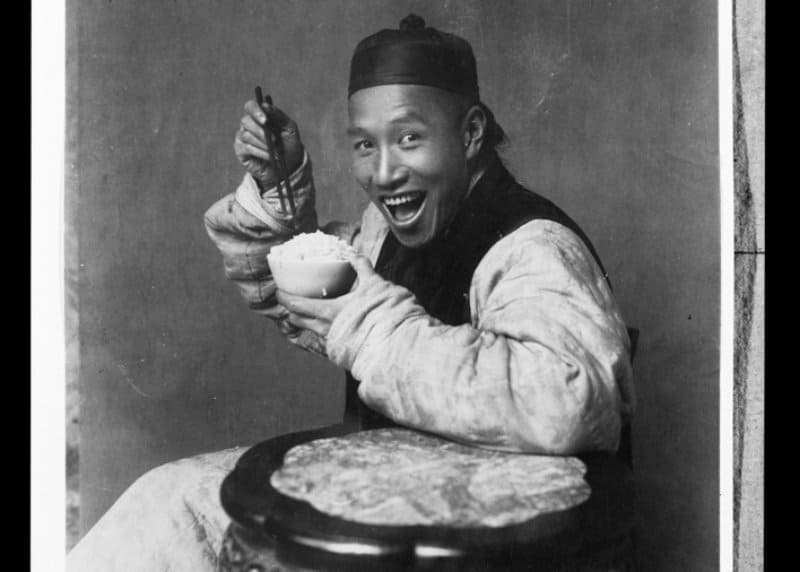 Sure, this one is in black and white. But can you blame us? This wonderfully modern looking photo predates the “selfie with food” by at least a hundred years. 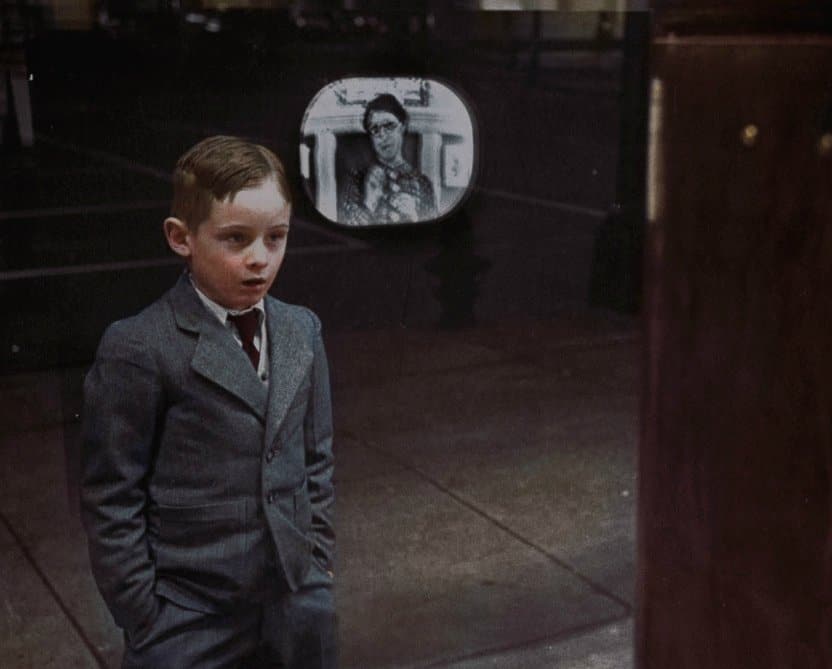 This photographer may have inadvertently captured the beginning of the end. An unidentified child watches television for the very first time, gazing transfixed into a glowing department store window.