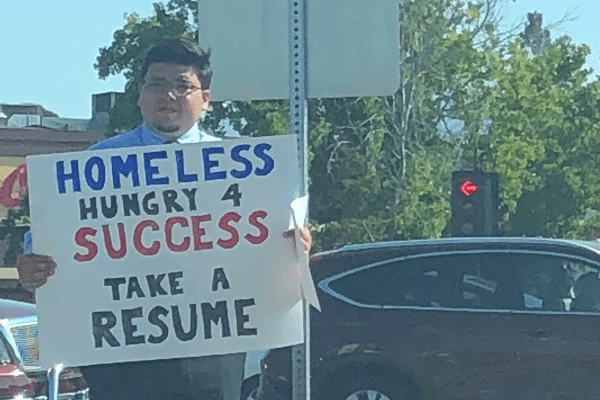 Homeless Guy Approached By Google After He Goes Viral

College graduate and web developer David Casarez woke up from sleeping on a park bench on Friday and headed to a nearby highway in Mountain View, California. Casarez donned his dress shirt and tie, and carried his hand-written sign that read;

As it turns out, this was the perfect strategy for Casarez. Shortly after standing on the median strip, a passerby took a photo of the man and his cardboard sign and uploaded it to Twitter, where it quickly went viral. By Sunday afternoon, Casarez received more than 200 job offers which included Google, Pandora, and Bitcoin.

“Google reached out to me. So many other companies. Pandora. A bunch of start ups. A product manager from Bitcoin.com was wondering if I could work remotely or if I want to relocate to Tokyo.”

Casarez graduated from Texas A&M Univesity with a bachelors in management information systems, and shortly after landed a web development job with General Motors in Austin, Texas. Casarez then cashed out his 401-K and headed to Silicon Valley where he had hoped to create his own tech startup, but sadly ran out of funds in June.

Casarez said he had “been living in my car for more than a year. No one was hiring. I had an interview with Apple in January, but the job was filled internally.” 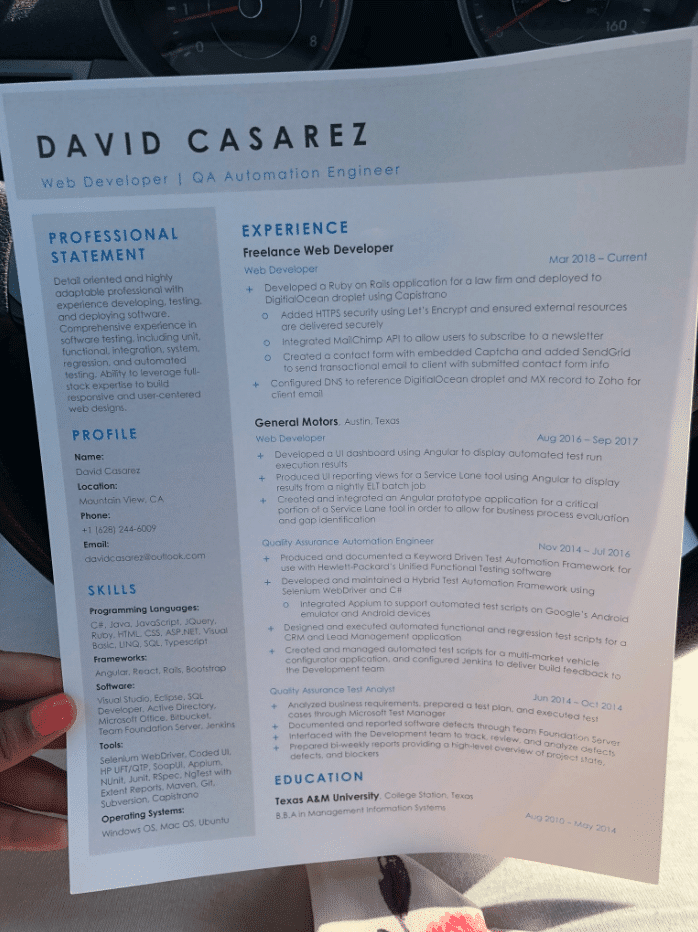 In June his van was repossessed, and was sleeping in the park ever since. He said he dressed in his best clothes on Friday and headed out to the highway to look for jobs in a different way.

“It was basically a make-or-break moment. I wanted to keep my head up high, keep looking forward and see what opportunity would come next. I was thinking you know, like this was like my last stop. If this didn’t work, I’d go back home and give up on my dream.”

After standing with his sign and a stack of resumes for a few hours, Casarez was approached by Jasmine Scofield who asked if she could take a photo of his sign and post it to Twitter.

Today I saw this young homeless man asking for people to take a resume rather than asking for money. If anyone in the Silicon Valley could help him out, that would be amazing. Please RT so we can help David out! pic.twitter.com/ewoE3PKFx7