20 Weird Traditions From Around The World 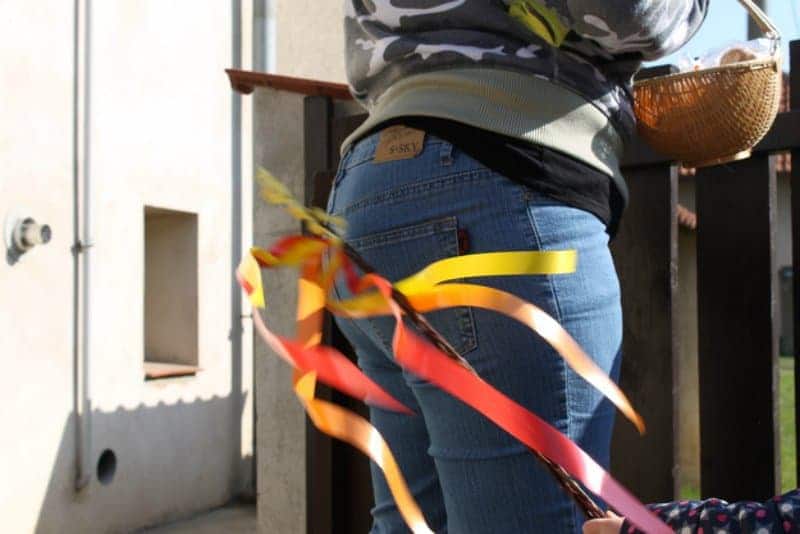 On Easter Monday, men in the Czech Republic go door to door with gaily decorated, braided wooden switches. These men lightly smack women on the buttocks in hopes of imbuing them with fertility. 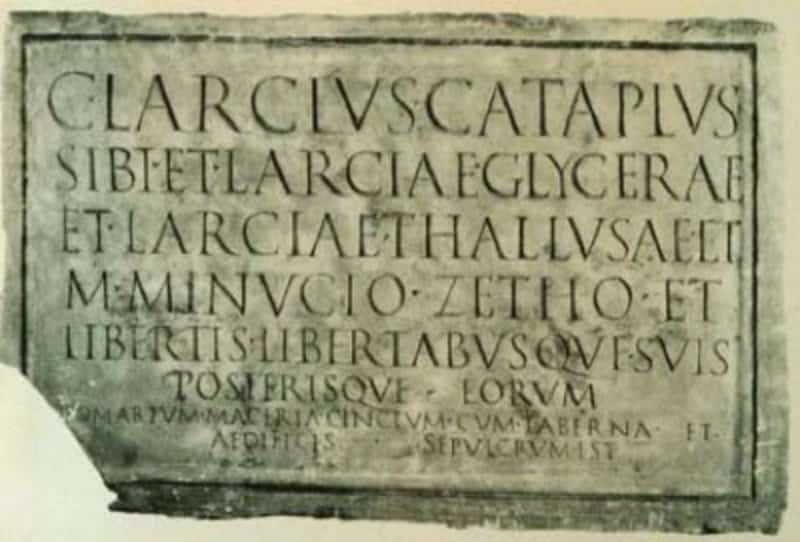 While this tradition isn’t practiced as often, it is still done occasionally and was quite popular years ago. Roman citizens would enact a series of tubes leading through graveyards and these tubes would be used to send honey and other liquids into the tombs of their loved ones. This was actually a way of feeding the dead. 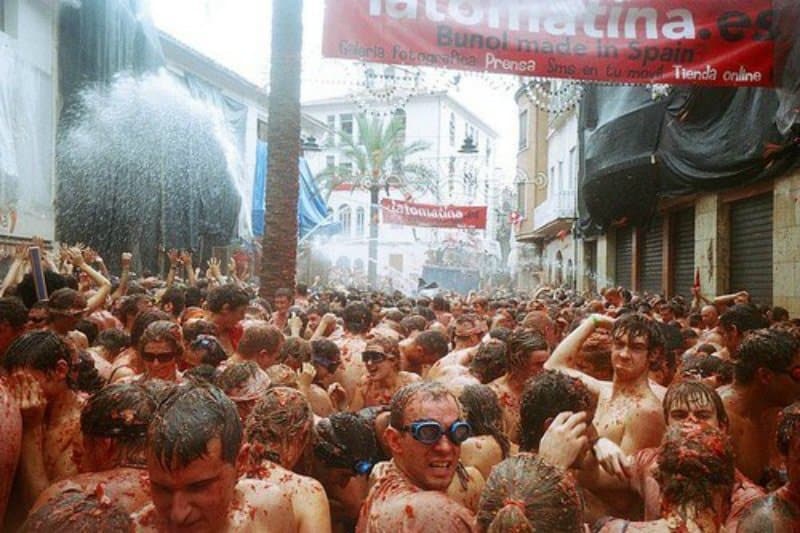 This might qualify as one of the largest food fights in the world. In the Spanish town of Bunol, La Tomatina takes place on the last Wednesday in August. Townspeople throw tomatoes at one another in lighthearted good fun. 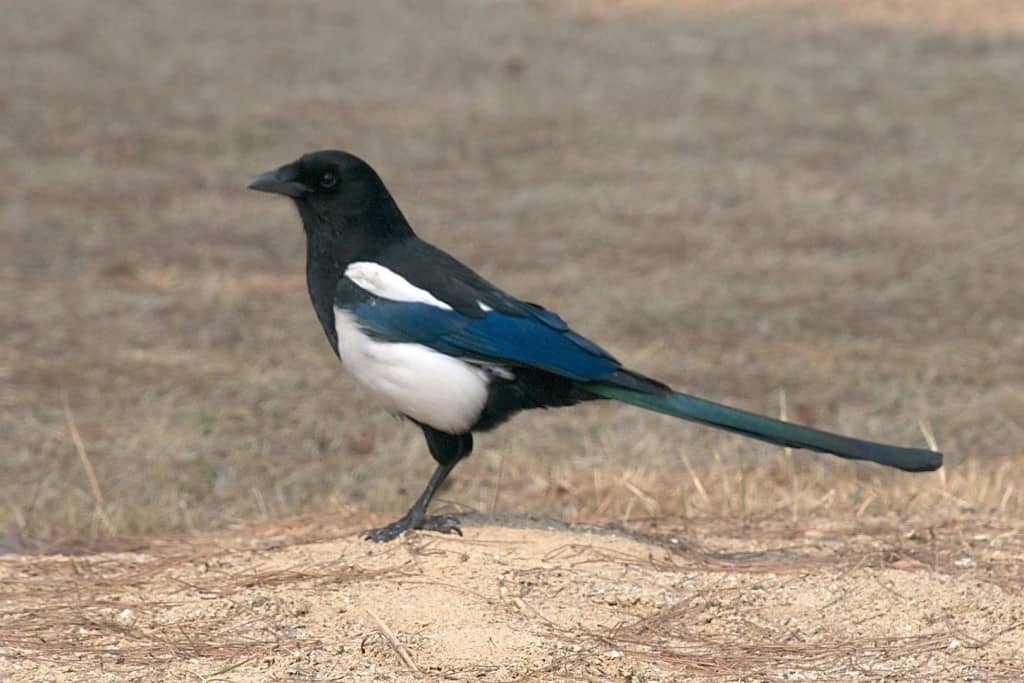 People in the UK believe that seeing a lone magpie is bad luck. On the other hand, these same people believe that they can get rid of the bad luck if they greet the bird with the salutation: “Good morning Mr Magpie, and how is your lady wife today?”

Cinnamon On All The Single Ladies (Denmark) 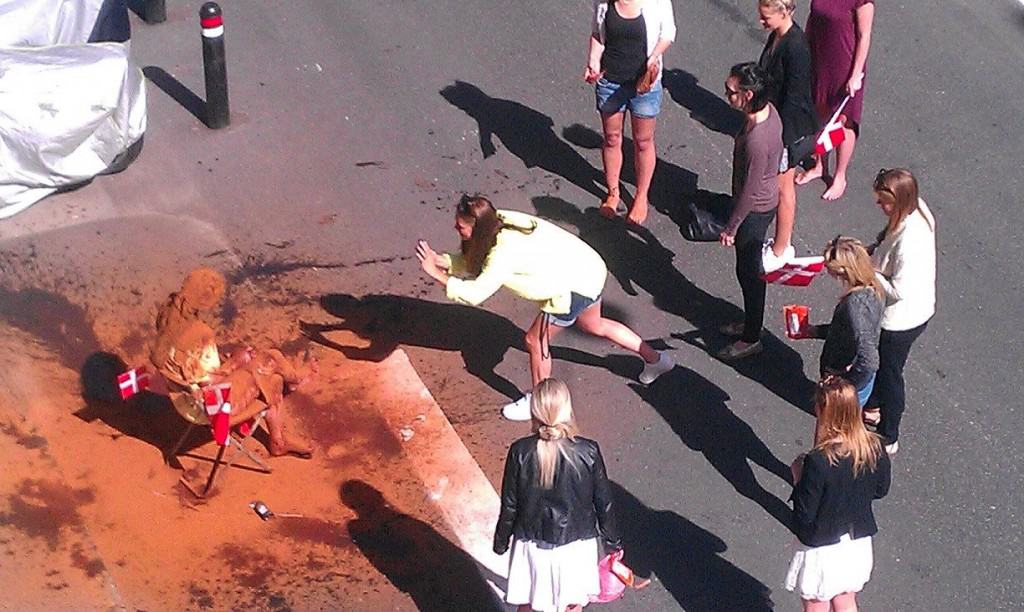 In Denmark, people throw cinnamon on anyone who is single. At least as long as those men and women are over the age of 25. If you are single in Denmark and you hit 30, you get pepper thrown on you. As if the dating scene wasn’t hard enough. 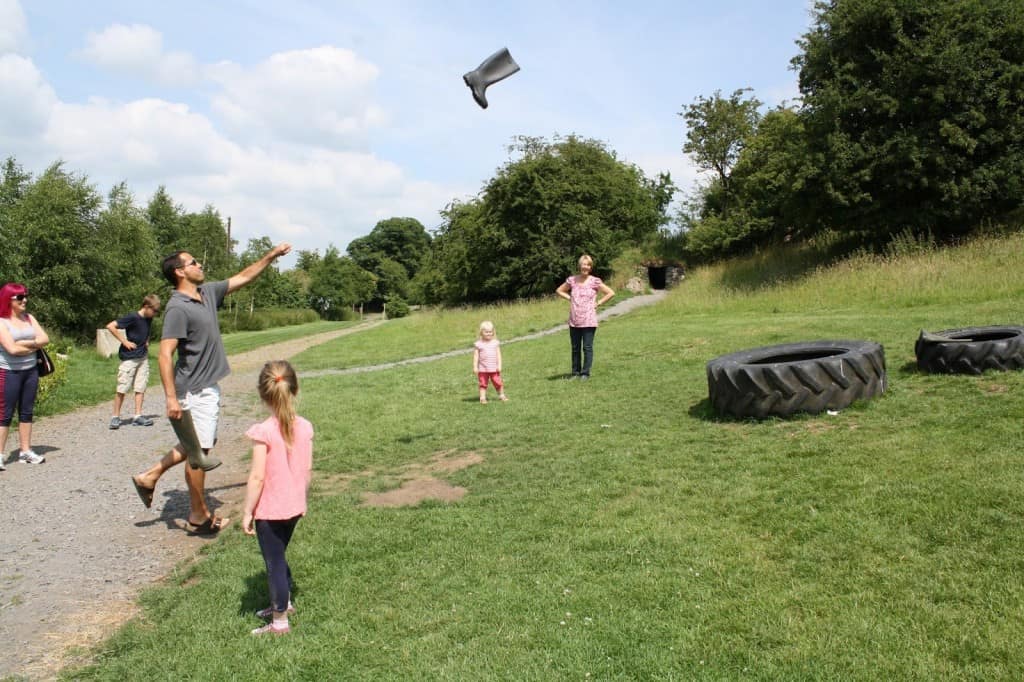 Germany has the market cornered on weird birthday traditions. Finland owns the title for weirdest sports. Like wife carrying, boot tossing has been around for centuries.

Eating The Ashes Of Loved Ones (Brazil) 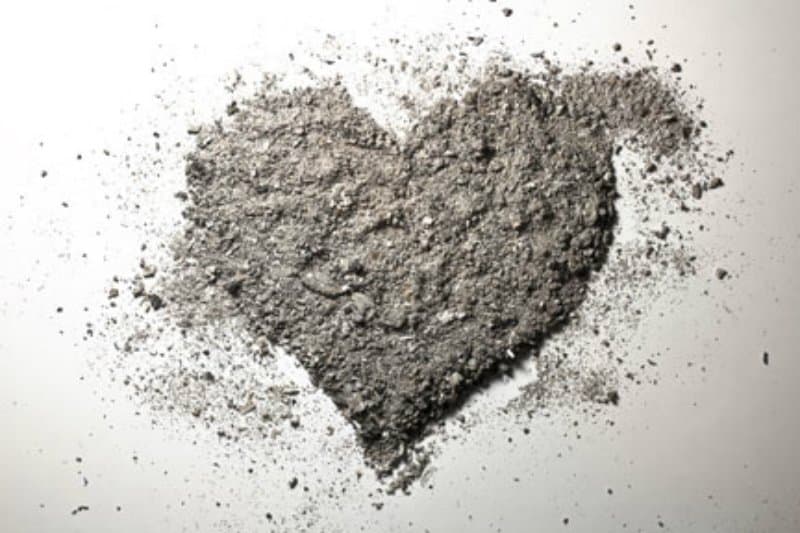 Applauding When A Plane Lands (Poland) 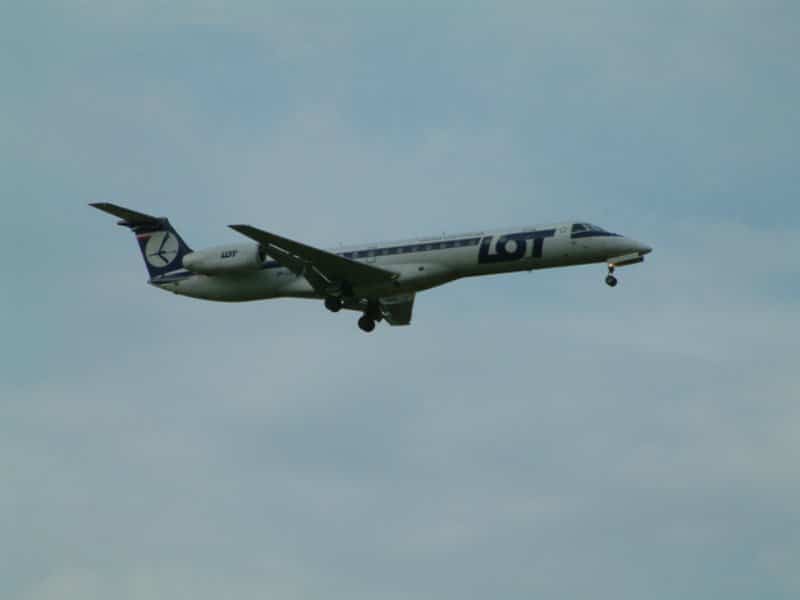 This is one of those traditions that is hard to pinpoint when it comes to origins. No one is sure why the polish have cornered the market on applauding when a plane lands either. Perhaps the Polish, as a people, are scared of flying.

“Pull My Finger” To The Extreme (Austria) 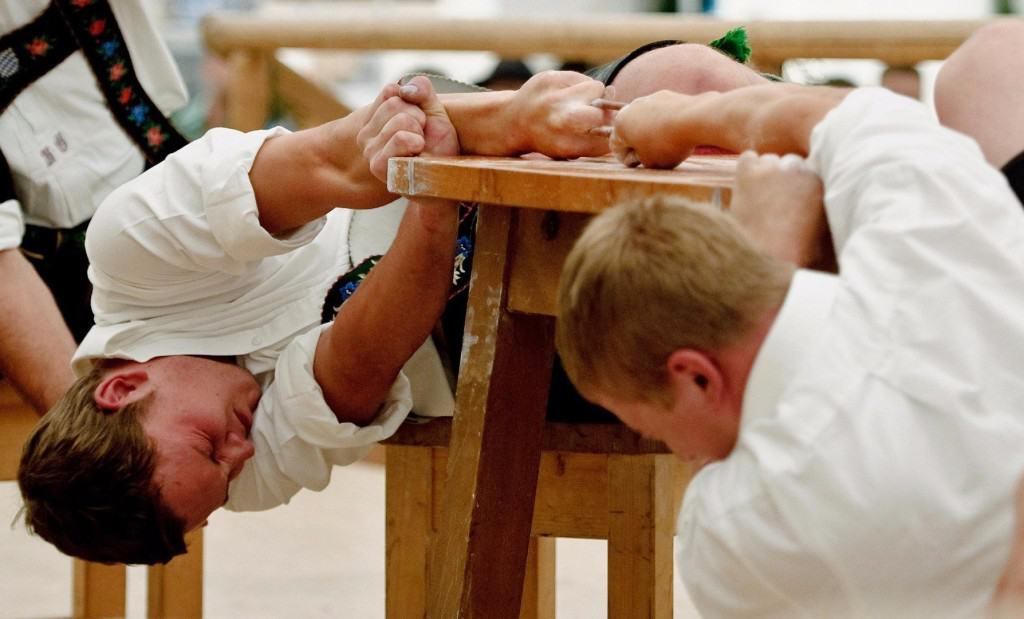 In Austria, pulling someone’s finger isn’t just a funny way to see them fart. It’s an actual sport along the lines of arm wrestling. There are massive competitions where people attempt to pull their opponents over a table by their fingers.

Shoving Your Face In Your Cake (Mexico) 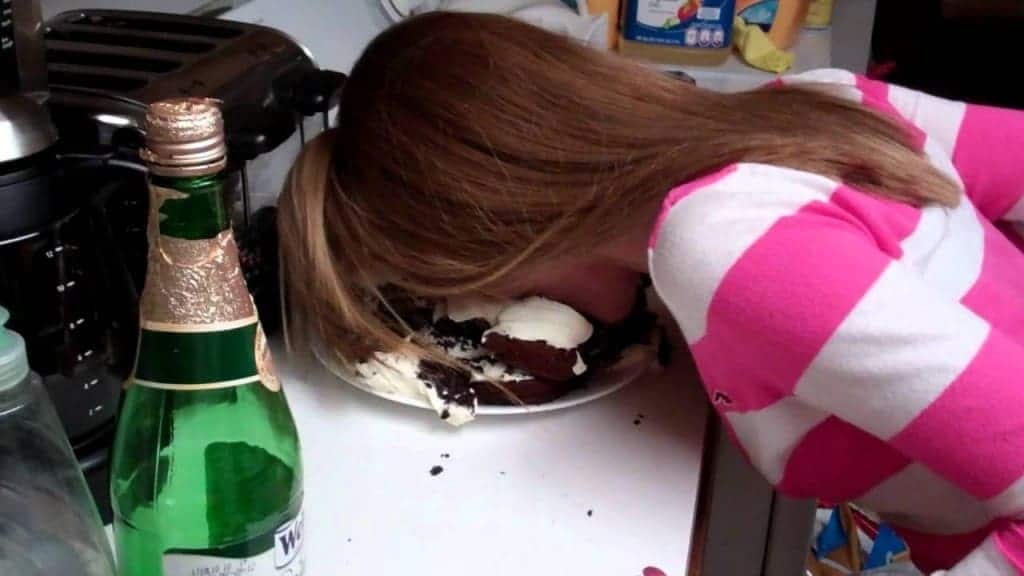 After the cake is brought out in Mexico, the birthday boy or girl is supposed to be the first one to take a bite. As the celebrant bends down to take a bite, someone will almost always shove their face into the cake. Since it’s tradition, you’ll know it’s coming and still do it.

Funny Hats For All The Single Ladies (France) 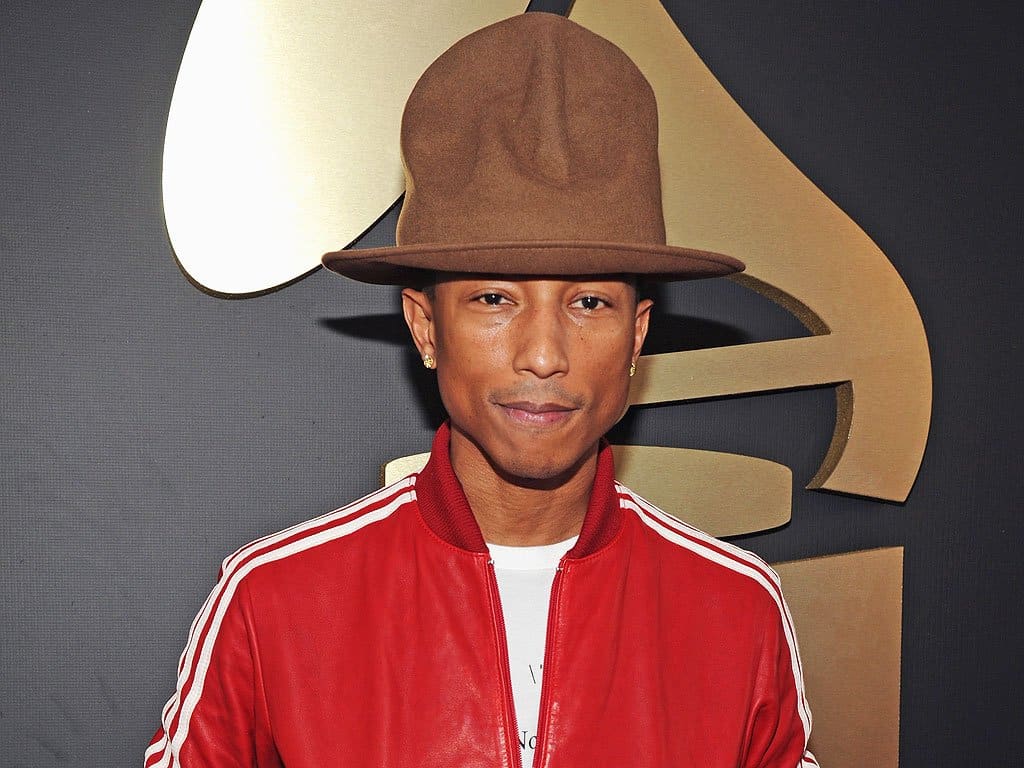 Looking For Fern Blossoms With Your Romantic Interest (Estonia) 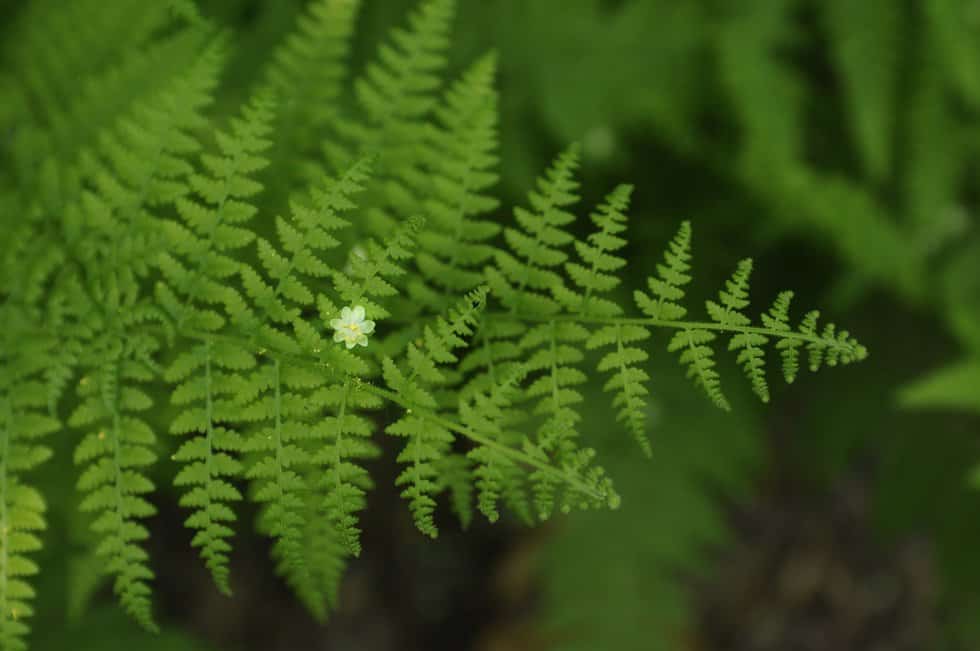 Every Midsummer in Estonia, young couples wander off into the woods together. The official reason is to look for fern blossoms. We think they’re probably doing something else entirely.

Socks Leading You On A Pub Crawl (Germany) 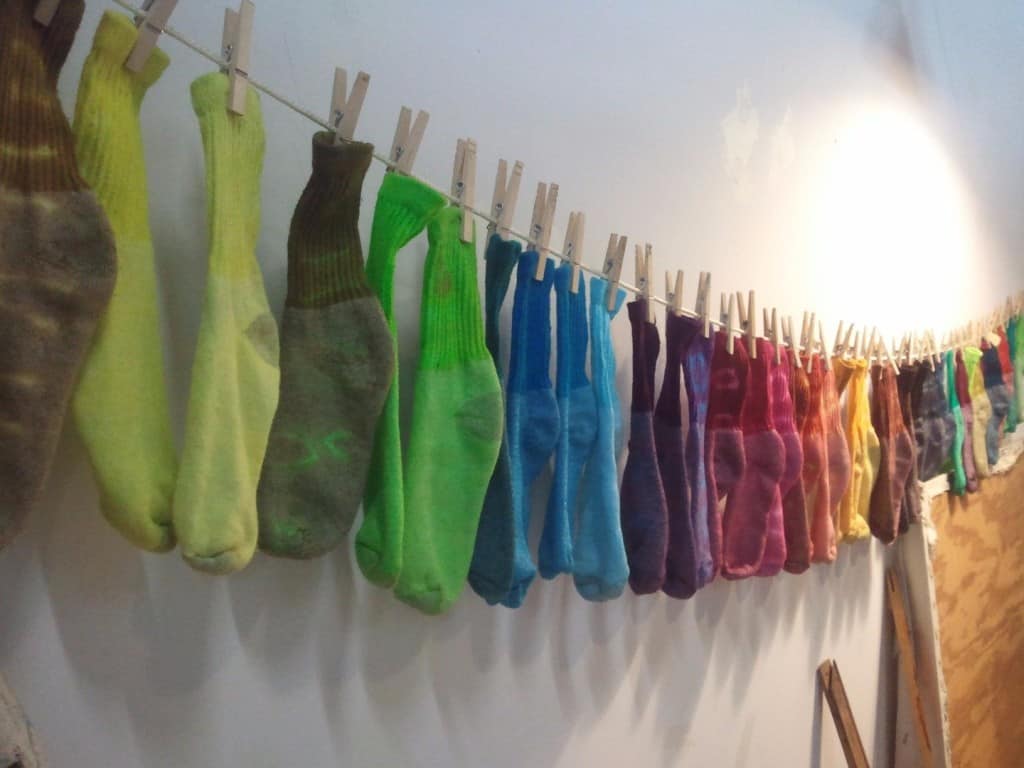 In Germany, unmarried 20-somethings will generally have to follow a line of socks to their birthday party. Along the way, they will be instructed to take a drink, then move on, rinse, repeat. 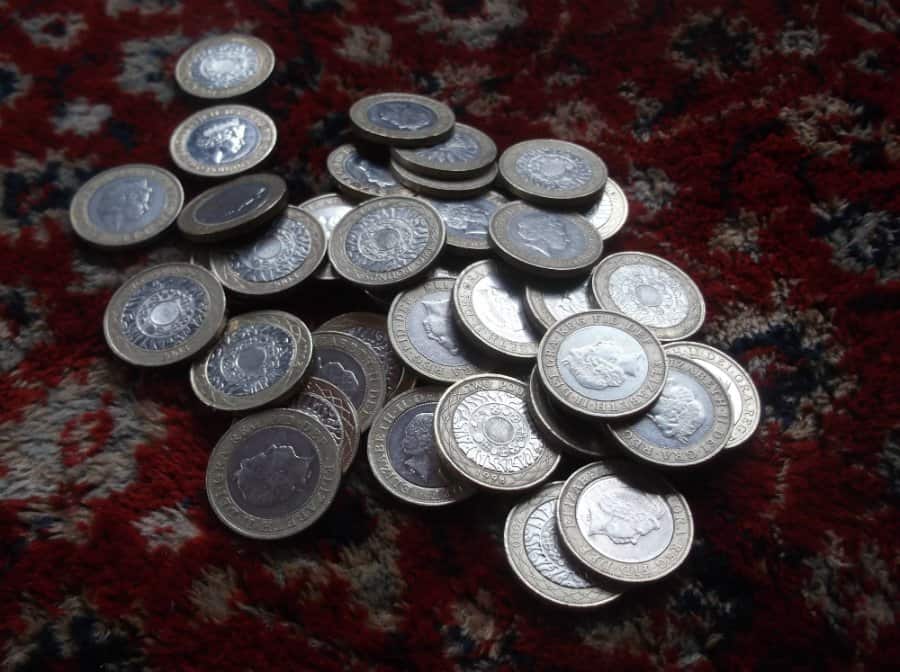 At Mexican baptisms, the adults throw coins at the children. While this sounds kind of painful, in recent years, actual money has been replaced every once in a while with chocolate coins.

Sitting Down With The Entire Family Before A Trip (Russia) 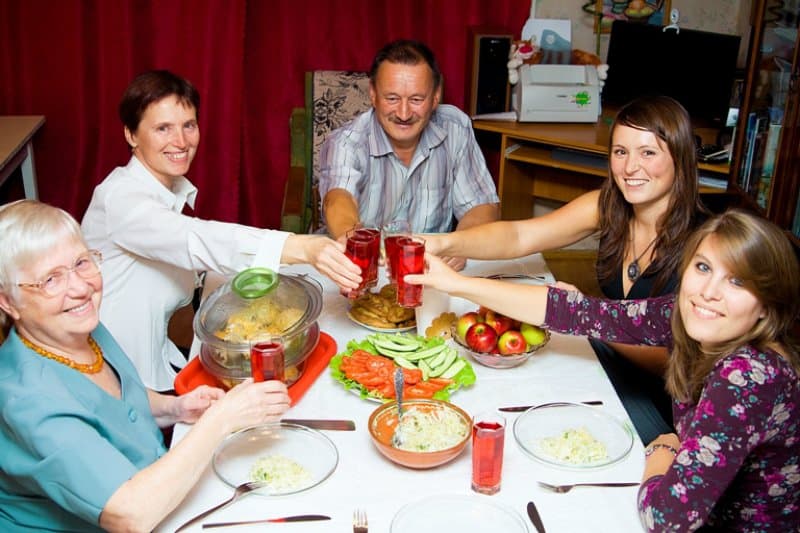 The Russians believe sitting down as a family before one leaves on a trip, even if the trip is only for a few hours will ward off bad luck. 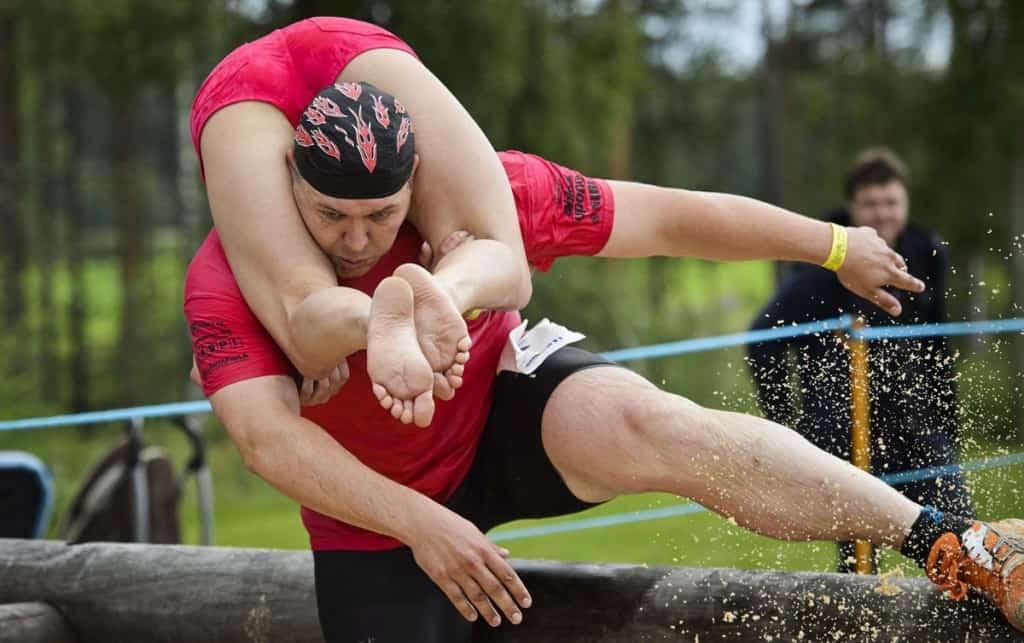 While Finland may have started the competitive wife carrying event, people from all over the world now come to this country in order to show how well they can tote their spouse. The sport is said to have started in the 19th century. 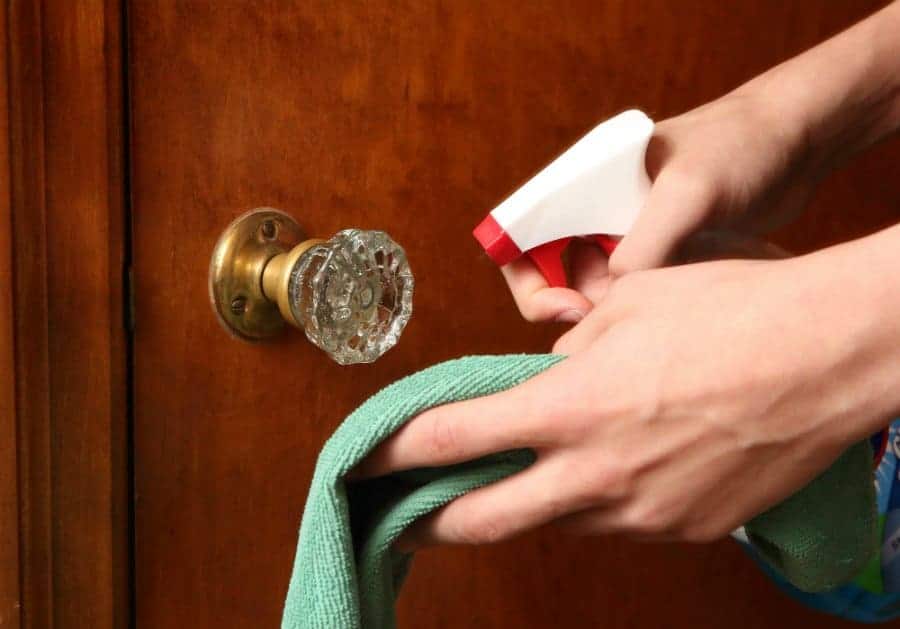 Germany seems to have cornered the market in weird birthday traditions. If you are unmarried on your 30th birthday, women are expected to clean the doorknobs of their best friends. Men will get other cleaning chores. The only way out of this weird tradition is to secure a kiss from the opposite sex.

Donning Kilts And Reciting Poetry Once a Year (Scotland) 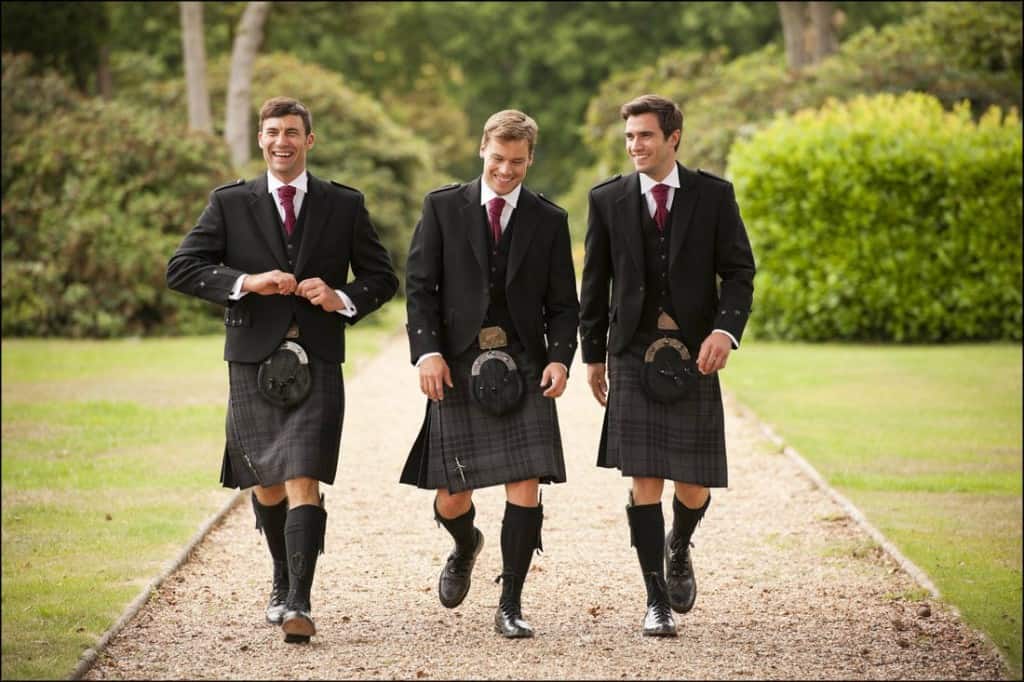 Every year on January 25th, Scottish lads don their favorite kilt and start reciting the poetry of famed national scribe Robert Burns. The day even has a title, “Burns Night”. Bagpipe music is also popular on this day and most people eat the traditional Scottish fare of haggis.

Congratulating The Entire Family On One Person’s Birthday (Netherlands) 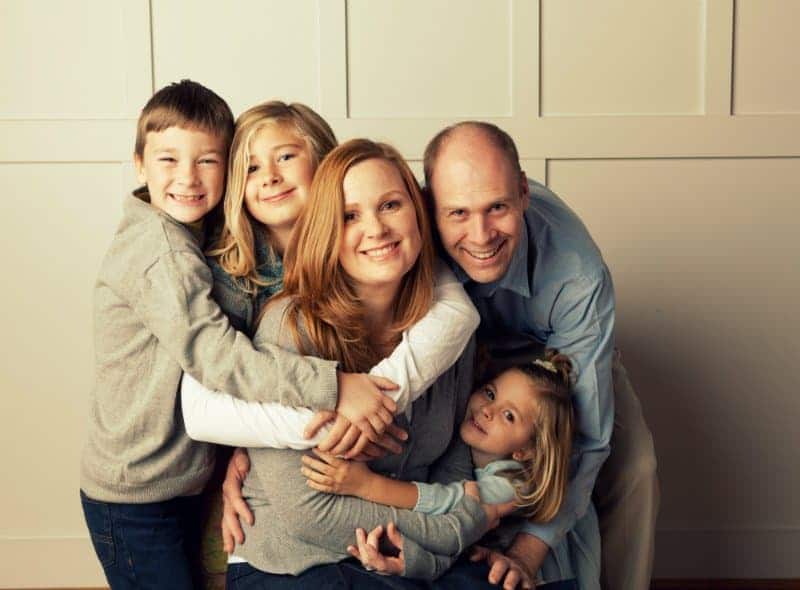 It’s a Dutch tradition that on someone’s birthday, you congratulate the family members of the person who is having the birthday, as well as the actual birthday boy or girl. 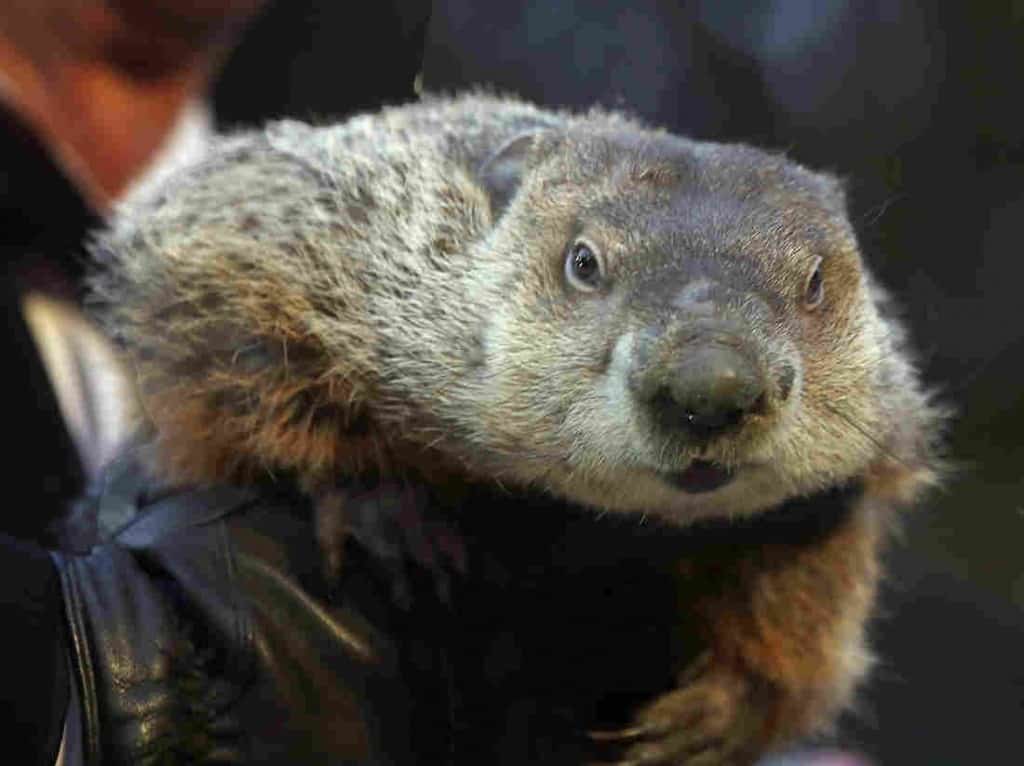 Americans have plenty of odd traditions, but one of the weirdest is when we all look to a groundhog to tell us when winter is going to end.