20 Of The Weirdest Foods People Eat Around The World

Remember when trying sushi was being adventurous? Or Mediterranean food (admit it — hummus was an adventure the first time). It was all so exciting, right? You probably won’t think of it that way after you read about these dishes. Not only will many of these make you want to skip dinner, but you’ll find yourself wondering how in the world someone came up with the idea to eat some of these. Get ready; you won’t believe the bizarre dishes some people are eating around the world! Bon Appetit! 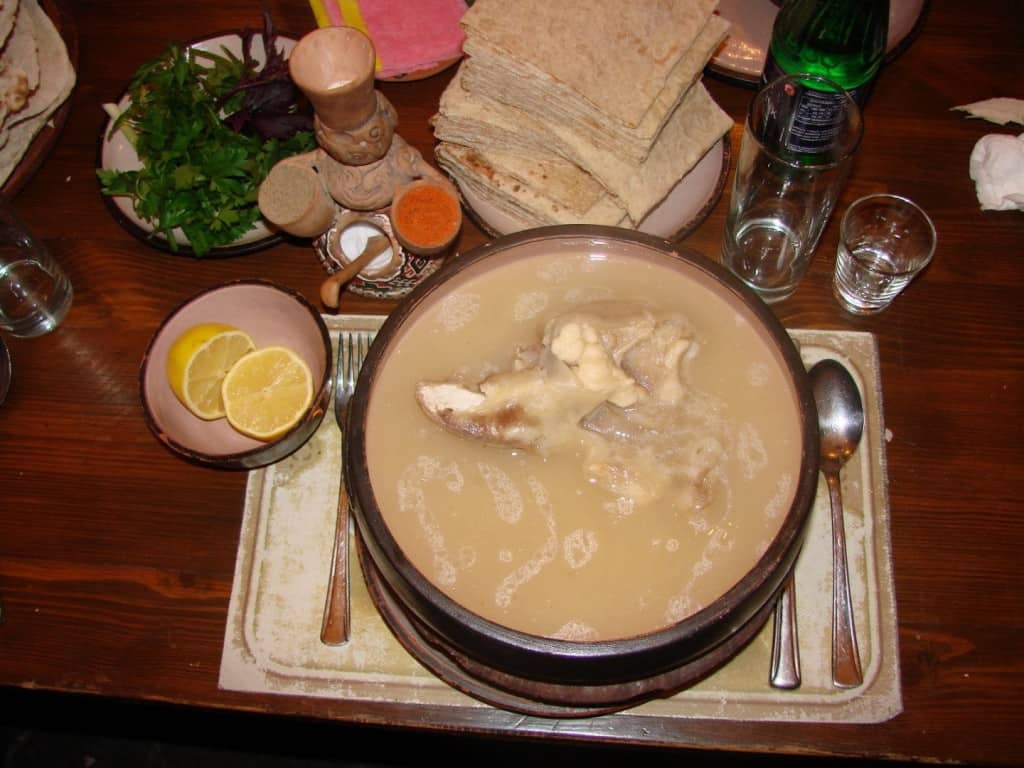 We’re not sure what’s appealing about spooning up a cow’s feet and head, but that’s what you’ll find in this stew. Khash was once popular, but now a delicacy throughout the Middle East, Eastern Europe and Turkey. What, not in the mood for some cow skull today? 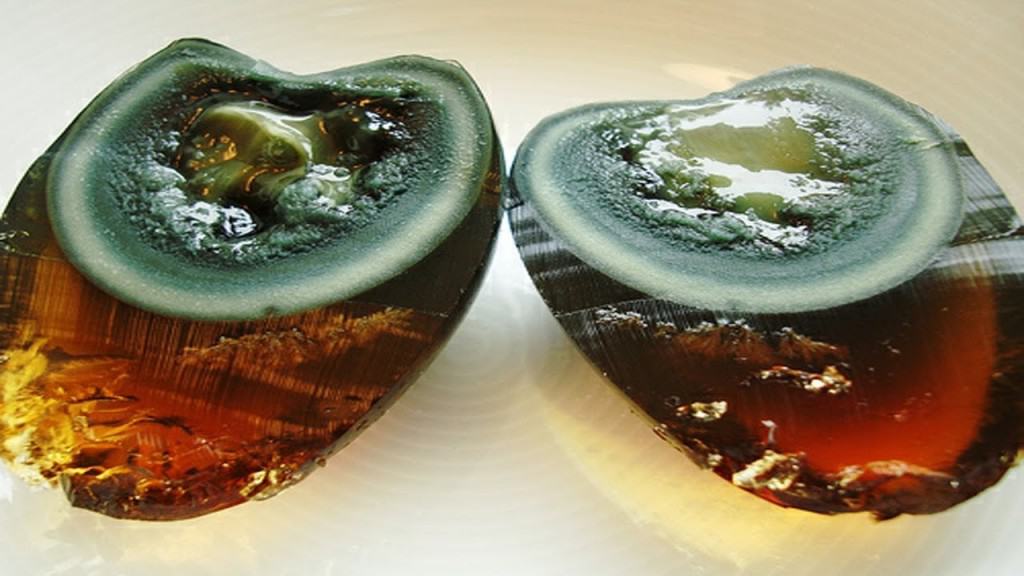 This might be the closest you’ll get to Dr. Seuss’ Green Eggs and Ham, not that you’ll want to after hearing about them. The raw eggs are preserved in a clay, ash and quicklime concoction for a few months. When finished they smell of ammonia and sulphur. So basically, they’re rotten eggs. 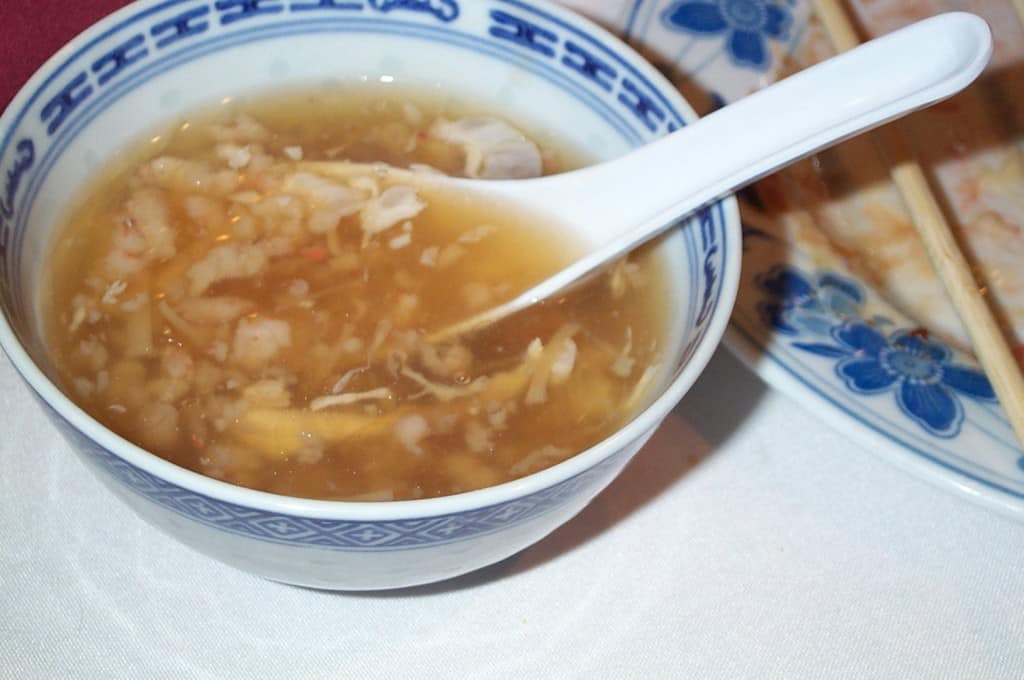 Not sure that a bird nest and soup should be mentioned together? They probably shouldn’t. This delicacy is made from the swiftlet bird nest, and no, we’re not talking about sticks and leaves here. The swiftlet bird makes their nest from their own saliva which hardens when it’s exposed to air. Supposedly it tastes rubbery. Ooooh, so that’s what all the fuss is about…. rubber. Yum.

Dragon In The Flame Of Desire (China) 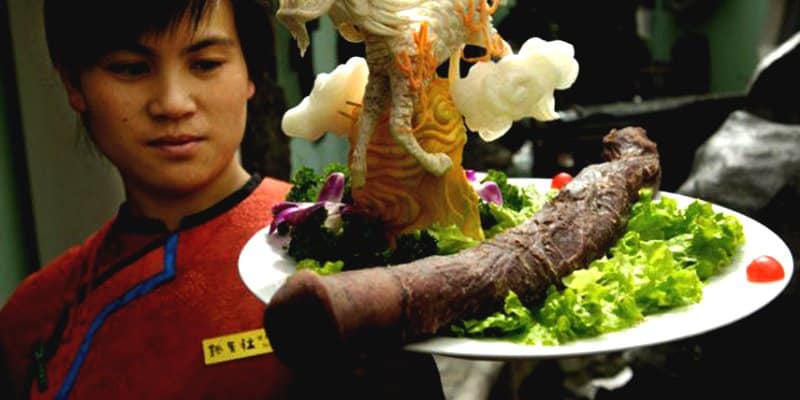 Swooning after hearing the name of this dish? It does sound like a name for some elaborate, romantic dessert. But, it’s not. This popular dish from Guilizhuang restaurant in Bejing is simply a yak’s penis. Yes, you read that right. 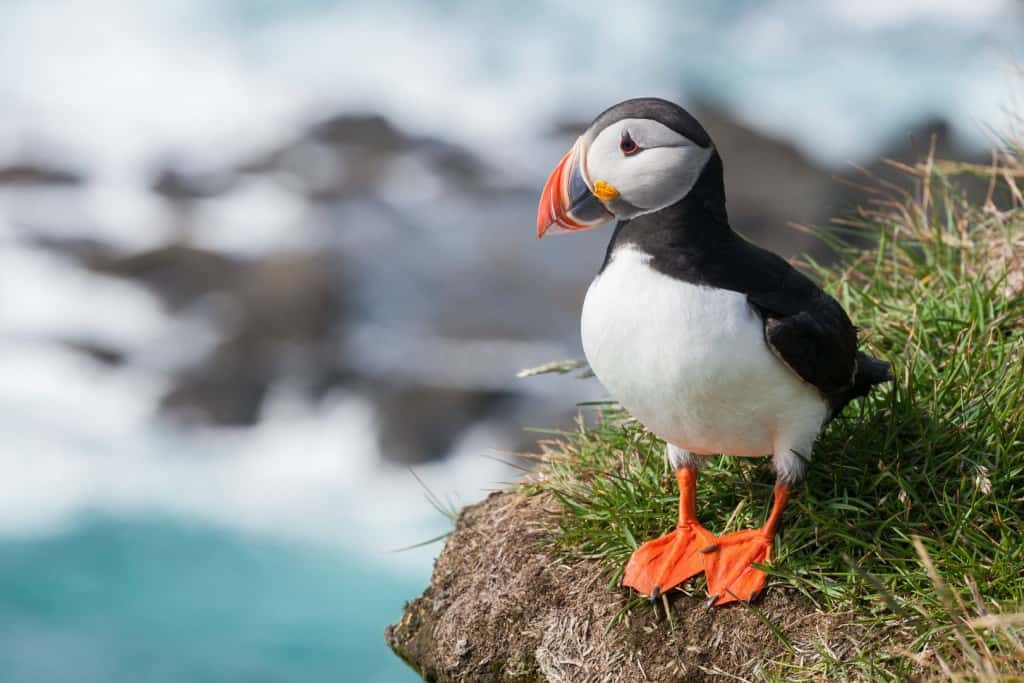 When you see a picture of the cute little puffin bird (who looks more like a Disney character than something you’d think of eating), it’s hard to imagine that someone would want to rip its heart out and eat it. But, in Iceland, they do. And it’s eatten raw. Bleh! 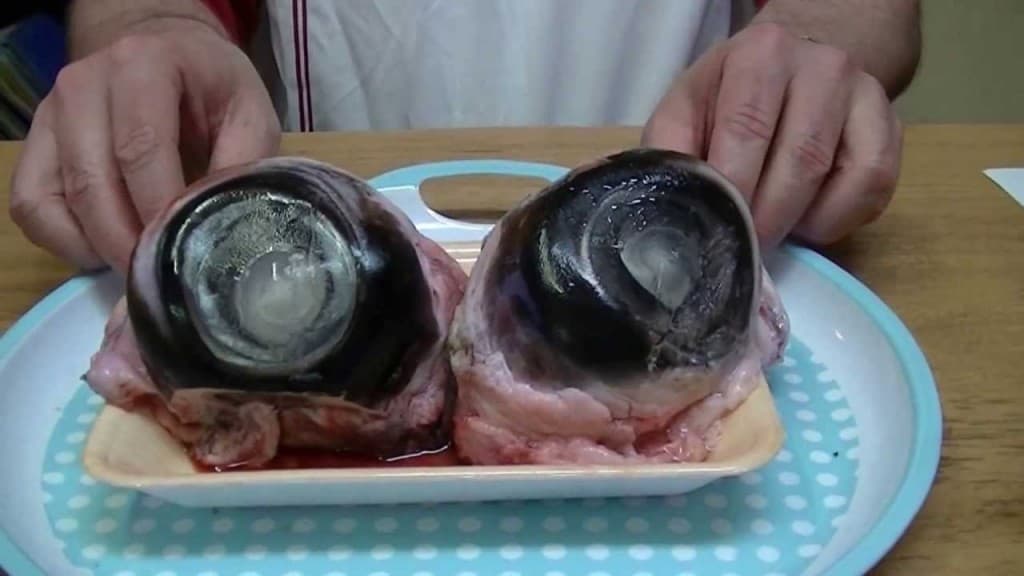 Well there’s nothing to decipher here. The name says it all — tuna eyeballs. Supposedly the taste is much like octopus or squid, but we’re still hung up on that slicing-through-the-eye part. 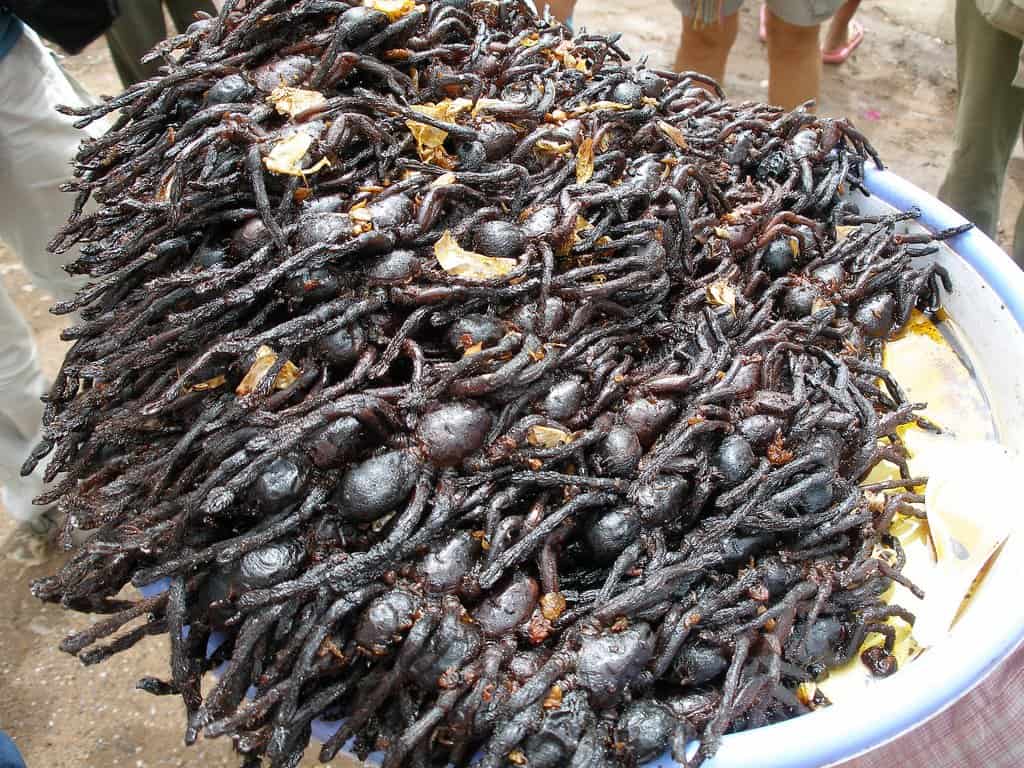 Who knew when you were trying to scoot daddy long legs out the door that you were letting go of a good meal? In Skuon, Cambodia, they take these creepy crawlies, marinate them in MSG, sugar and salt, and fry them up with garlic. I’m guessing no one in Skuon screams when they see spiders. 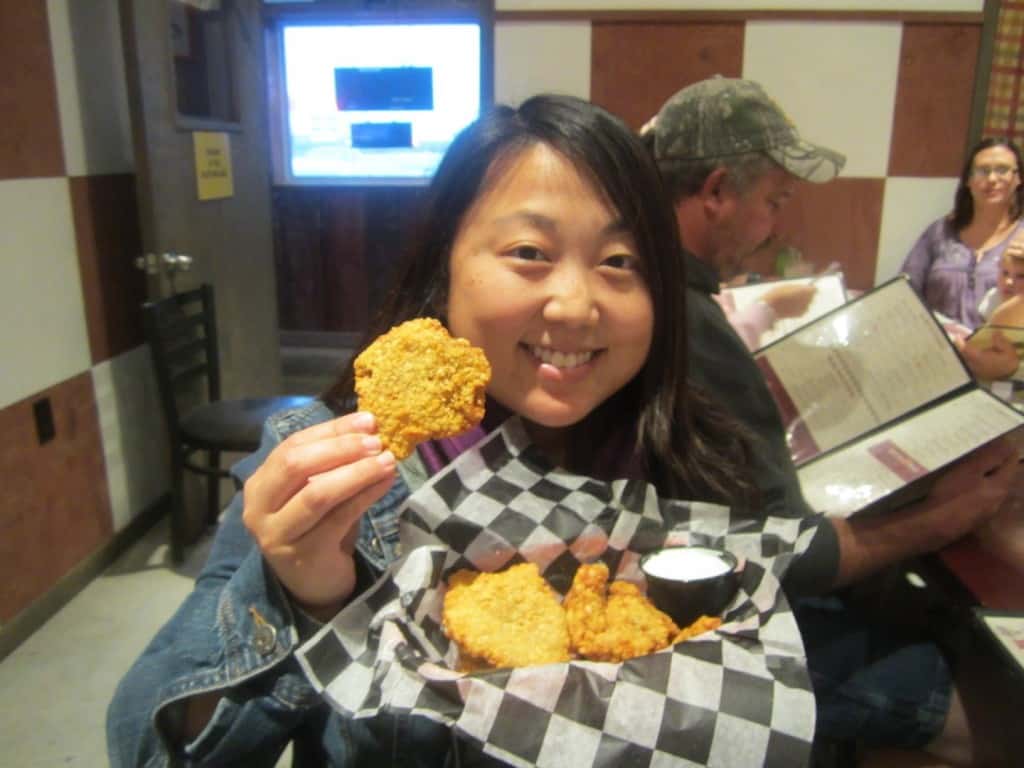 Before you start wondering if you missed something in Geography class and if there is an ocean next to the Rocky mountains, then no — there isn’t. These “oysters” have as much to do with the sea as a bull. And speaking of bulls… The Rocky Mountain oysters are actually not oysters at all. They’re fried bull testicles. Don’t ever be fooled by a name. 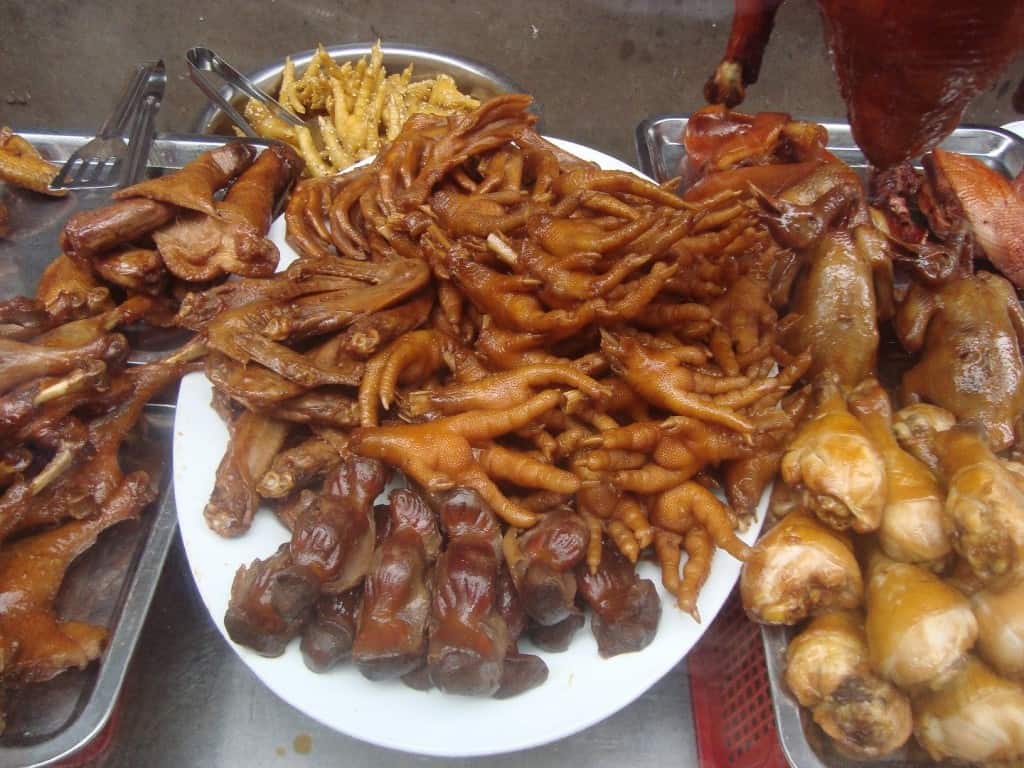 These guys are pretty gelatinous since they’re mostly skin, but supposedly when they’re flavored well, they taste pretty good. But, the bones! The feet! Can you really get over that part of it? 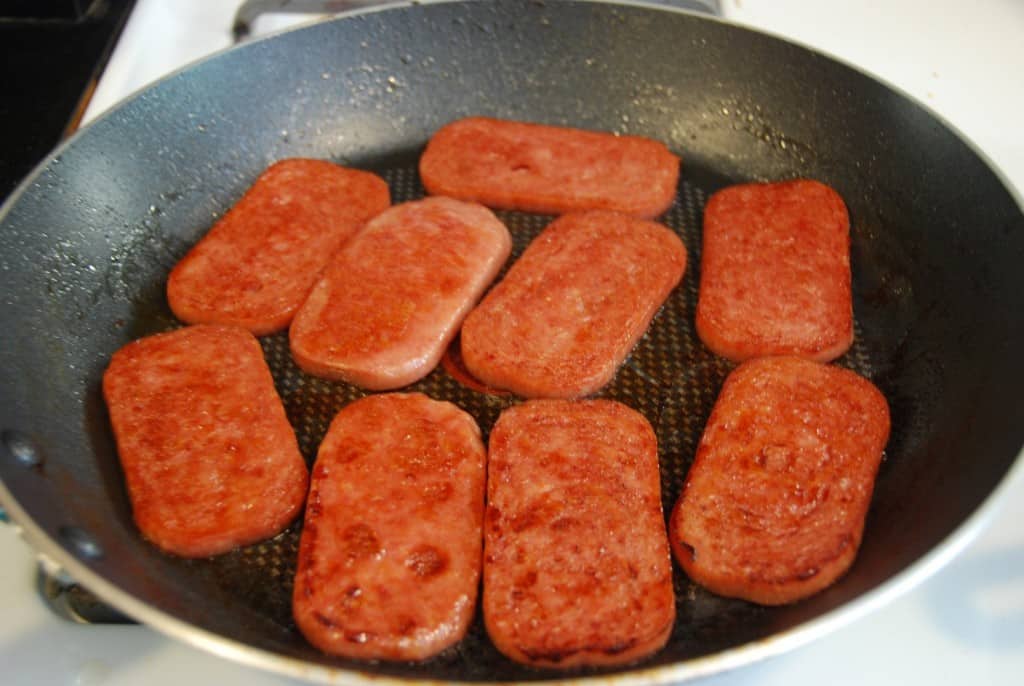 Any food whose contents have remained a mystery surely needs to be on the list! Spam is supposedly made of chopped pork shoulder meat, ham and potato starch. Anyone still hungry now?

Wait, aren’t these guys supposed to be pets? Not necessarily if you find yourself in Peru. It’s sad to say, but these guys are served whole (roasted) or in casserole dishes. Poor fellas. 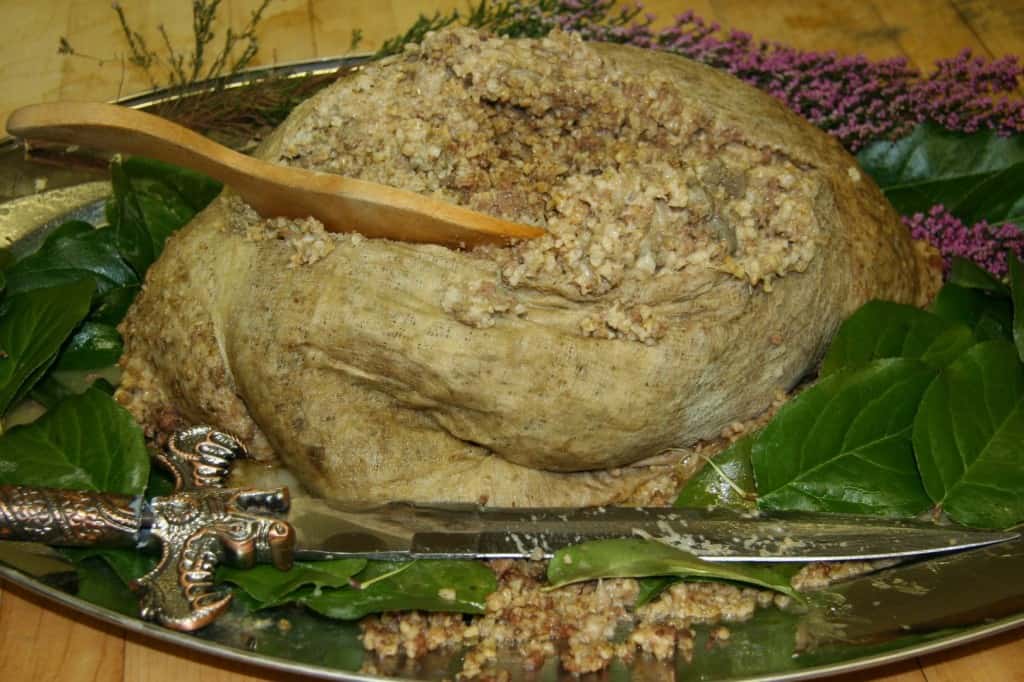 Minced meat doesn’t sound so creepy, unless you’re talking about Haggis. This Scottish dish consists of minced sheep’s heart, liver and lungs. At least it’s cooked with onions and oatmeal. After all, something needs to take your mind off the minced lung part. 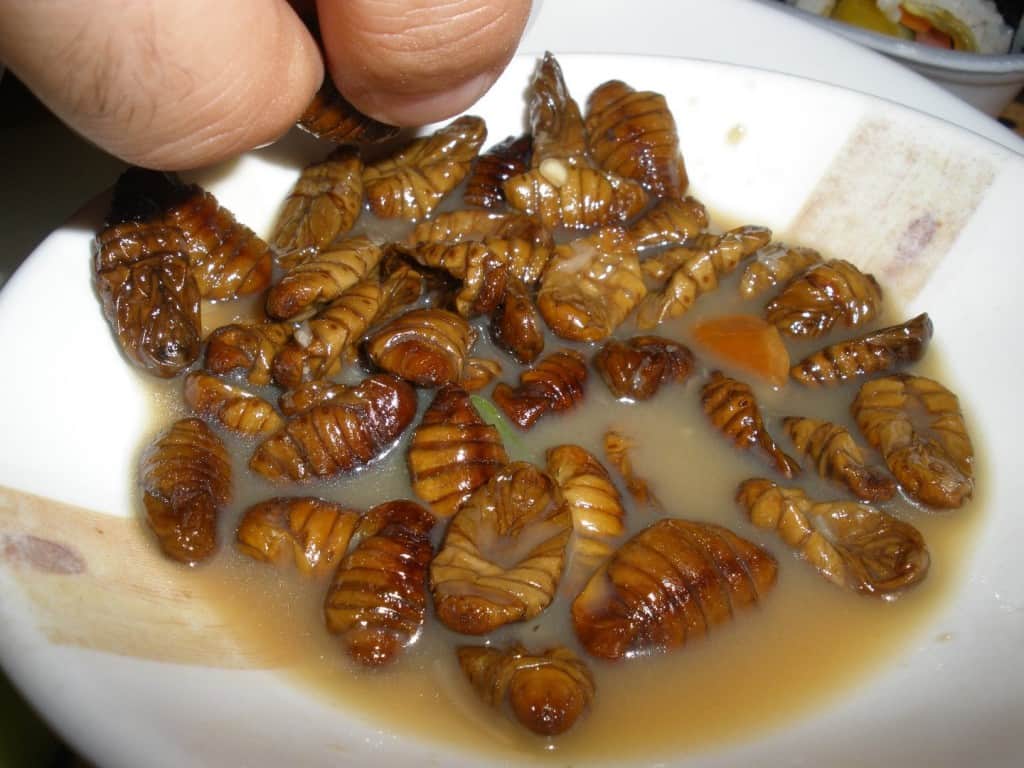 If you’ve ever wanted to cut yourself a piece of wood for dinner, there’s a dish waiting for you in Korea. Beondegi is boiled or steamed silkworms that are seasoned, and apparently taste like wood. Yum! 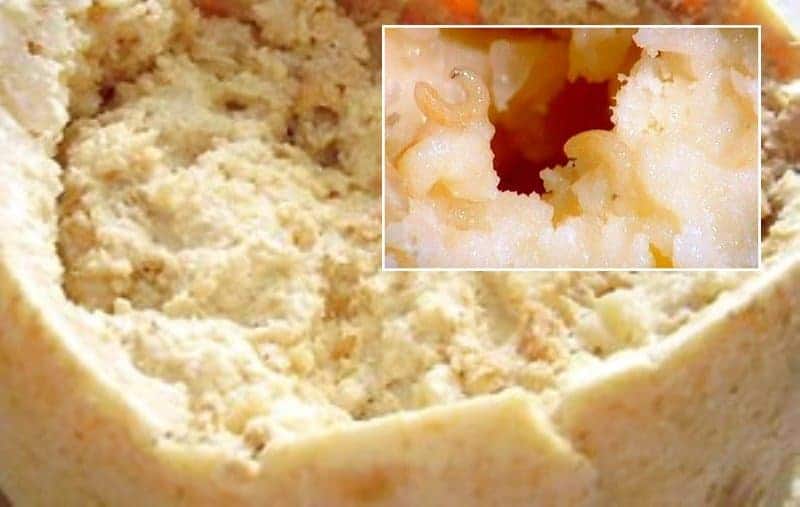 You had me at cheese. You really had me at Italy. You lost me at maggots. Yep, this aged sheep’s milk cheese has thousands of maggots slivering around inside. Supposedly they “bring the flavor out” and yes, people eat the whole thing, maggots included. 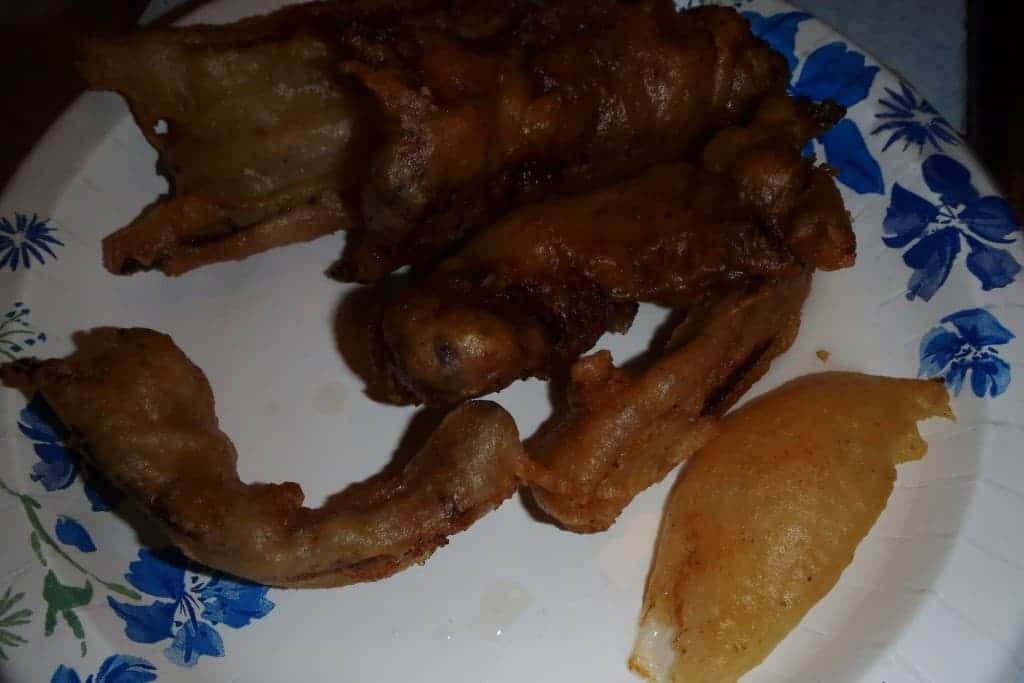 Um, whatever happened to just plain ole southern fried chicken? They say everything taste good when it’s fried and this dish would be the telltale. The rattlesnake meat is boiled off the bones, dipped in egg, seasoning, flour and breadcrumbs, and deep fried. Lost you at the rattlesnake part though, didn’t we? 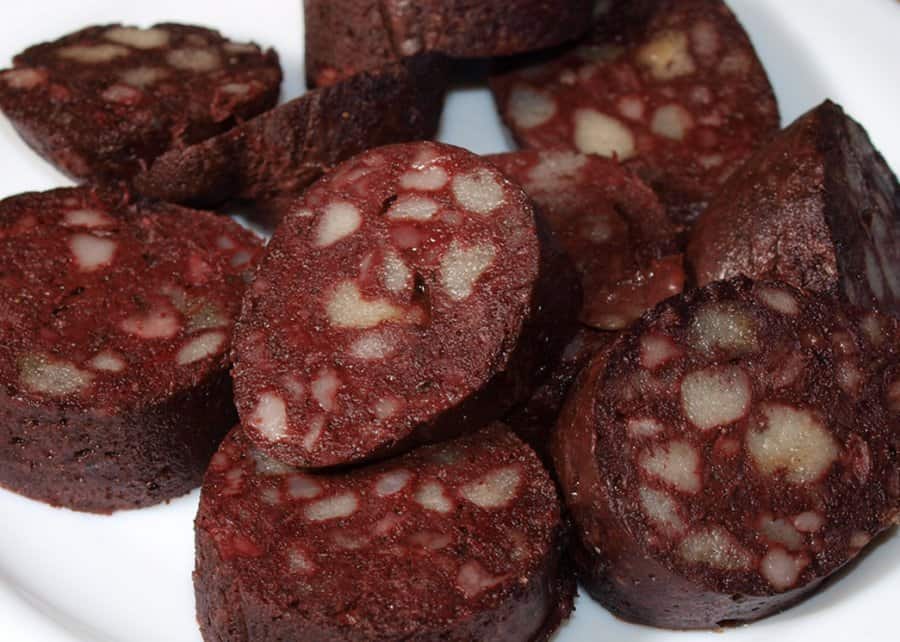 Don’t be fooled by the pudding part, or the sausage part for that matter. Neither are in this dish. Black pudding is basically congealed blood that’s been cooked with various natural flavorings and thickening agents. It’s finished off being stuffed inside a sausage skin. Speechless?. 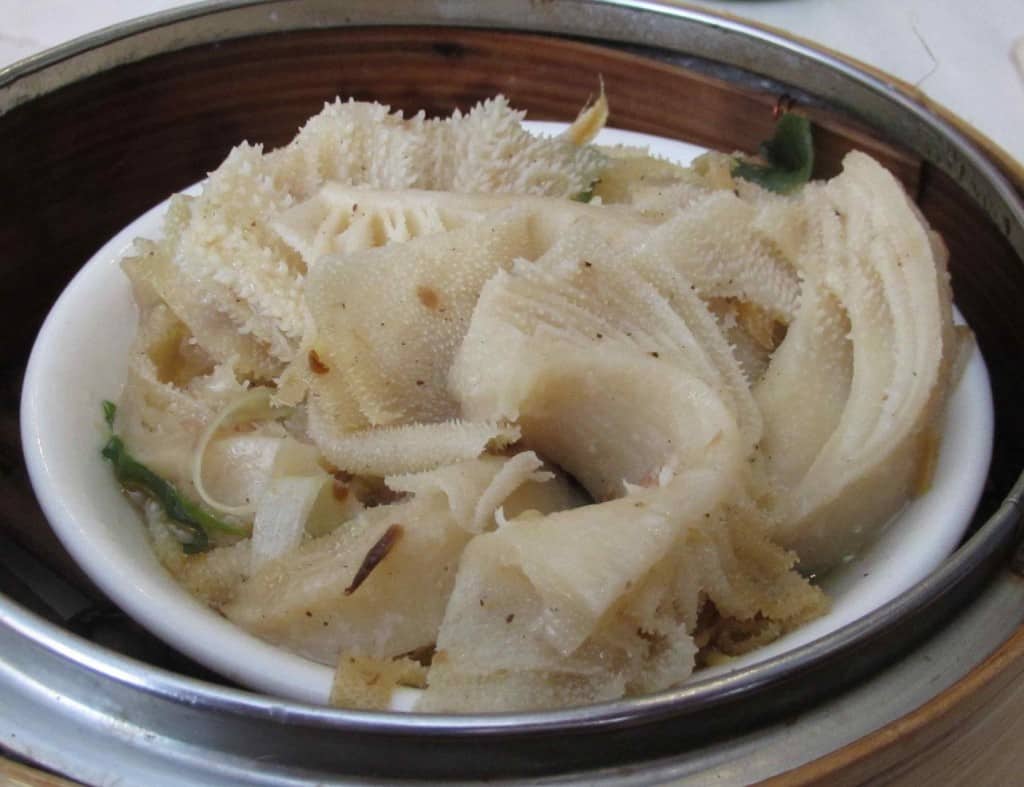 Tripe is just the stomach linings of different animals. That’s all. And it has a spongy, honeycomb, rubbery texture, which happens to sound like one of the most unappealing dishes. But, not to worry — it’s served with different sauces to add flavor. Um, isn’t that what fried food is for anyway? 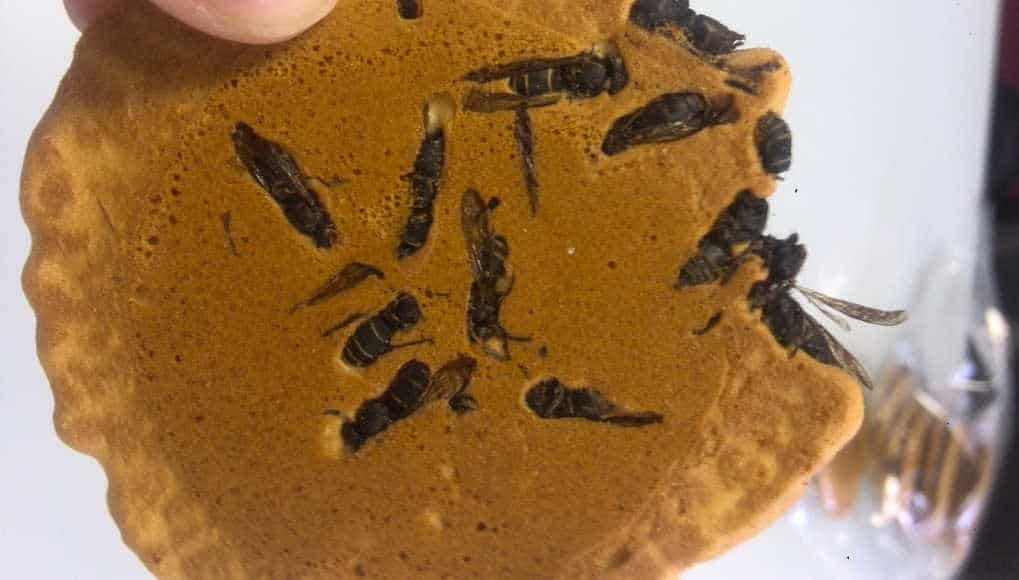 When did wasp become synonymous with cracker? Some things really should stay away from each other and this is one of them. Are you also wondering who thought of putting these two together? I’ll stick to the plain ones, thanks. 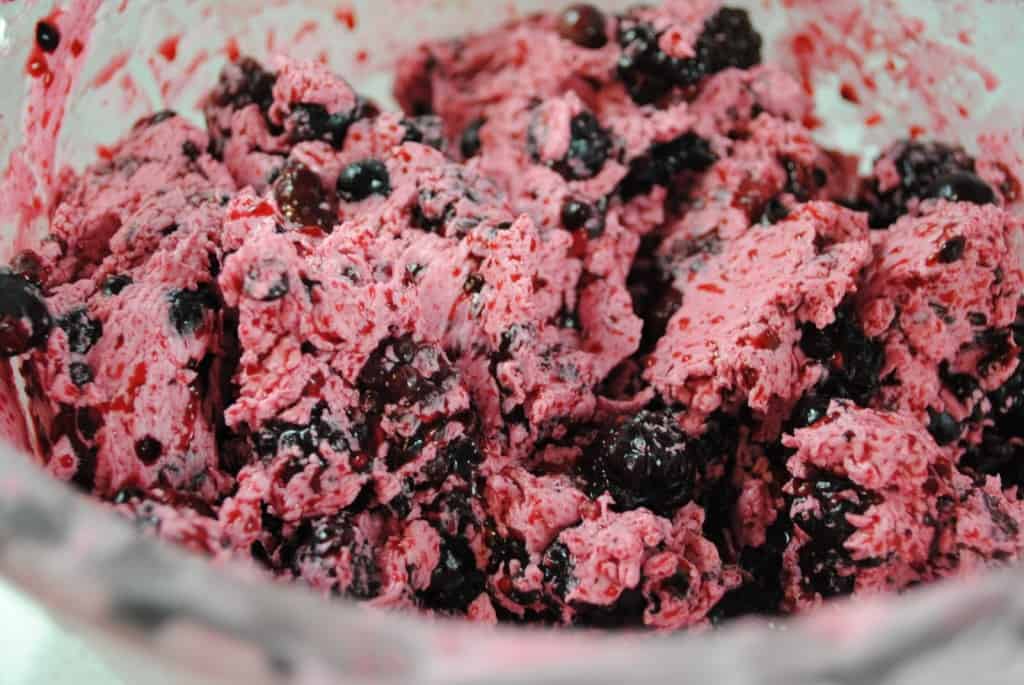 While it looks like a scrumptious gelato from Rome, there is nothing Italian about this ice cream. It does have berries and fresh fallen snow, but it’s also blended with ground fish, reindeer fat and seal oil. We think we’ll pass on dessert. 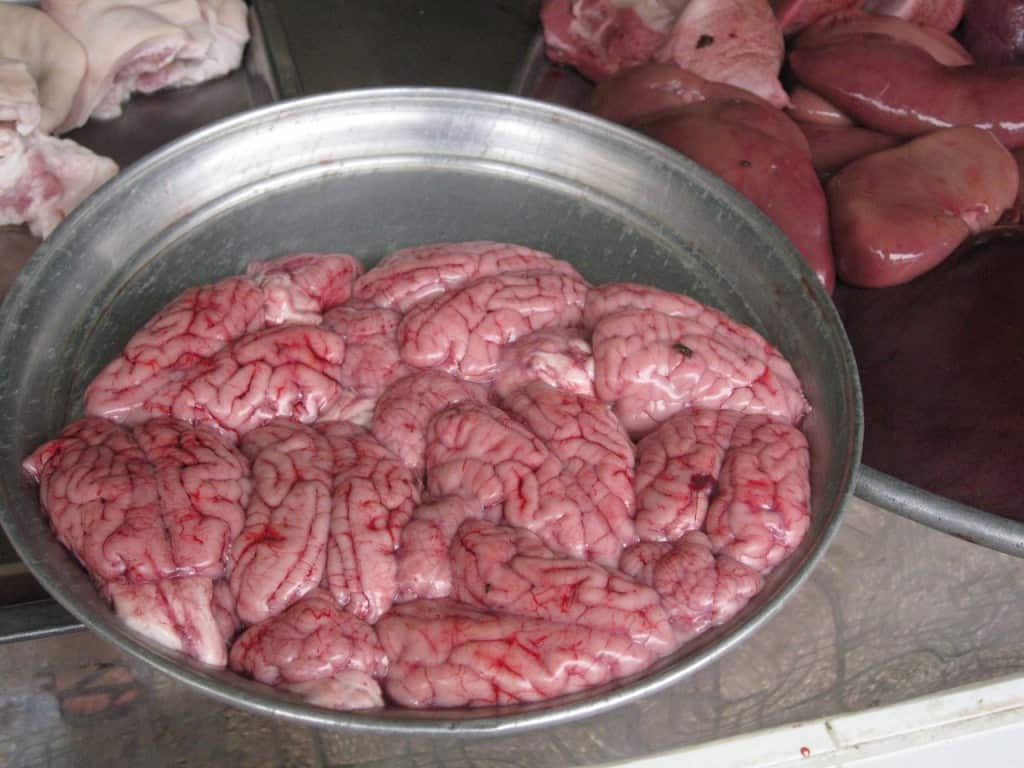 Not sure how much alcohol one has to consume to stomach monkey brains, nor do we intend to find out. We’re just wondering why go there. Seriously, can we just leave these little guys at the zoo — at peace with their bananas — or in the wild to swing from something?