20 Fascinating Sinkholes To Dive Into

Sinkholes, depending on who you are, are either incredibly fascinating or slightly terrifying. These wonders of the world manage to eviscerate nearby homes, forests, mountains, and everything else unlucky enough to get caught in the mouth of the hole. However, they can also provide the country where they are located with a nice spot for tourists to explore. Some are perfect for swimming, others are just natural wonders you can take pictures of, but all of them are fascinating to some degree. 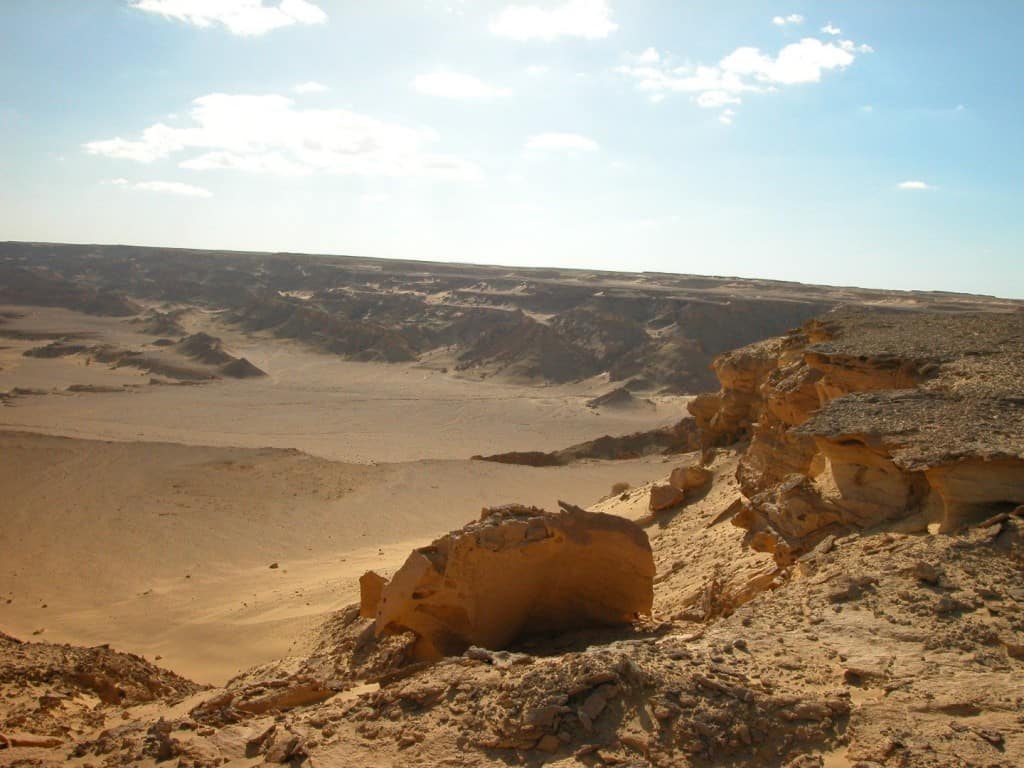 Located west of Cairo, Egypt, this massive natural sinkhole measures 80km long by 120km wide. The pit is filled with sludge, which is quite dangerous. Scientists have attempted to harness the sinkhole in an effort to obtain energy independence more recently. This particular hole, which is only one of many throughout Egypt, is completely natural. 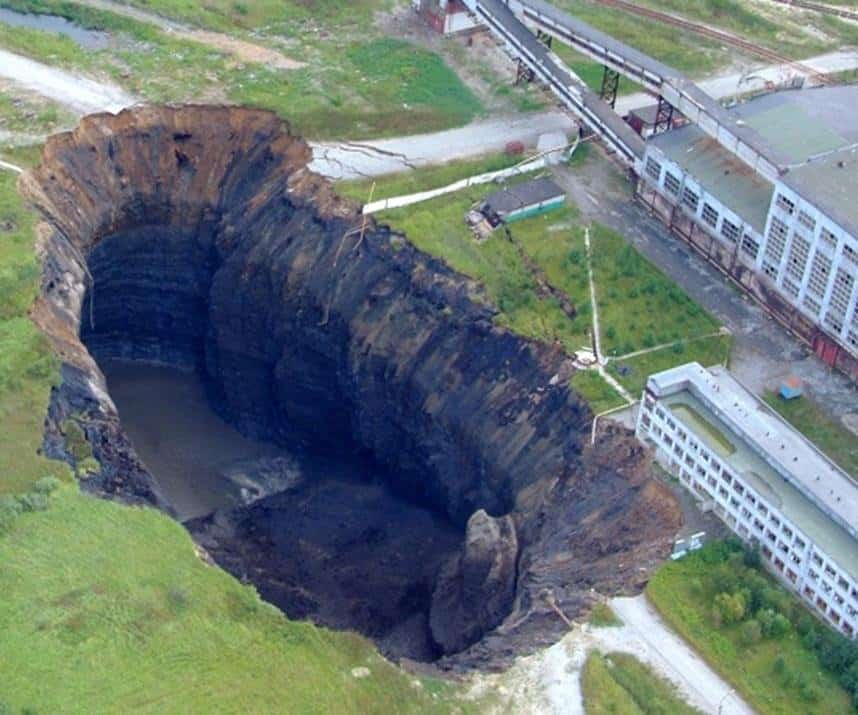 Russia has a lot of weird things going on throughout the country, but the Berezniki sinkhole is near the top. This hole began in 1986 and grows worse every single year. The sinkhole is currently over 200m deep, 80m long, and 40m wide. The hole is quite close to destroying the potash mine’s only rail line. 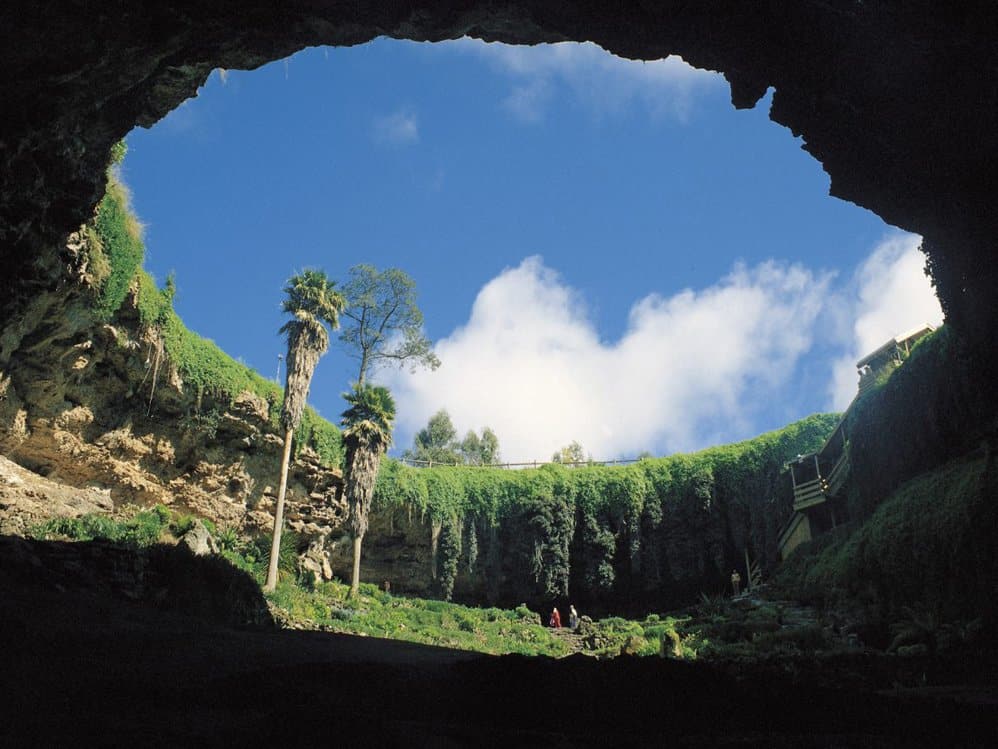 Venezuela is home to a lot of natural beauty, and the Sarisarinama holes are just some of those. Several of these sinkholes are completely round and are about 350m wide and over 350m deep. Scientists aren’t quite sure how these formed, though no one really minds when they look that good. 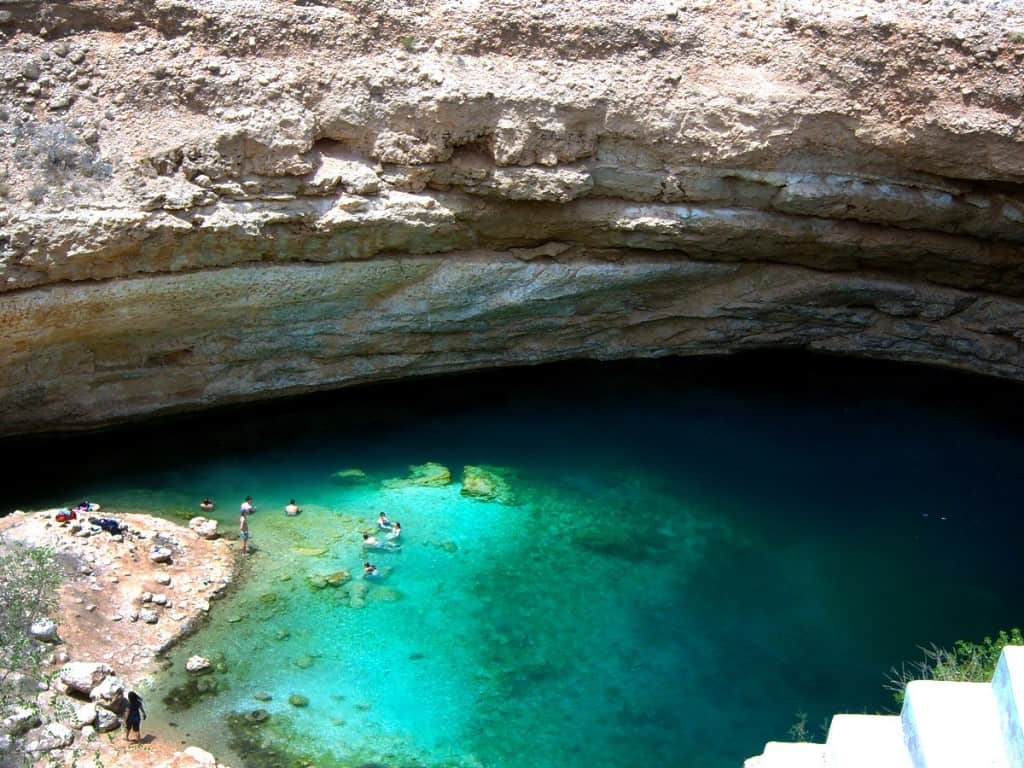 The Bimmah sinkholes were a bit of a god-send for Oman, as it turned the city into a tourist destination that shouldn’t be missed. The entire hole is filled with water, making it the perfect spot for visiting people to go swimming. 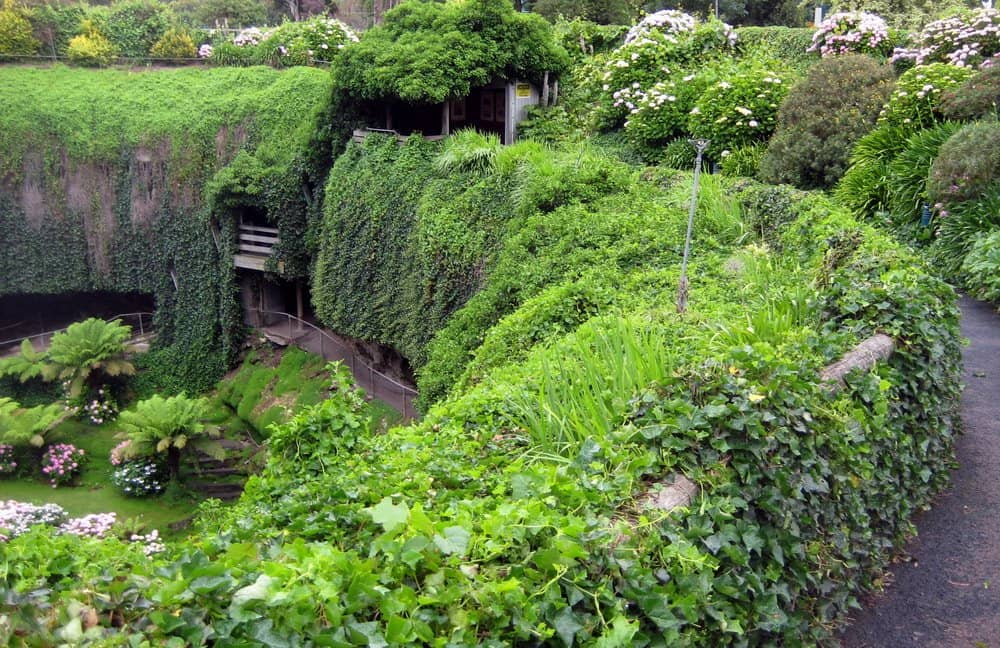 Mount Gambier has quickly become known as the city of craters. Located in South East Australia, water channels, caves, and caverns underneath the land have begun to sink inward. Volcanic craters and natural sinkholes fill with water throughout the land. 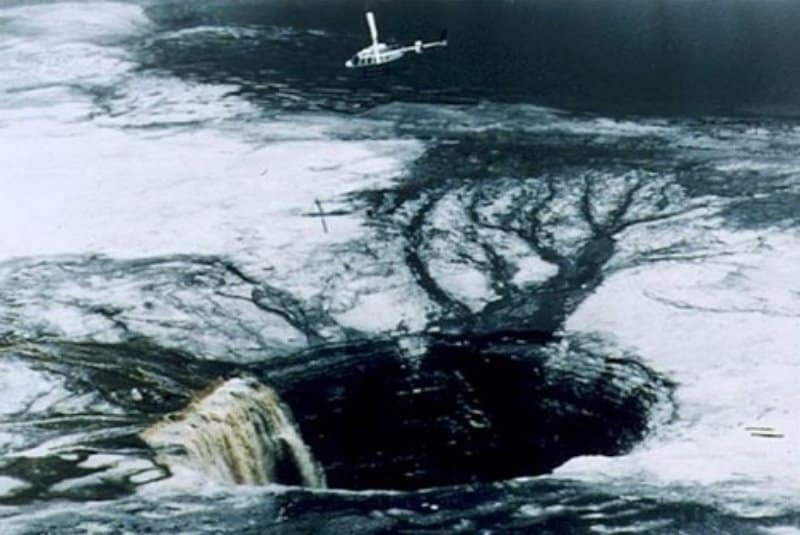 Unfortunately, not all sinkholes are beautiful. For example, the Agrico Gypsum Stack in Florida was devastating in 1994. A 15-story sinkhole tore through the state underneath an 80-million-ton pile of gypsum stack (toxic waste). The hazardous material contaminated 90% of the drinking water, and cleanup costs were well into the millions. 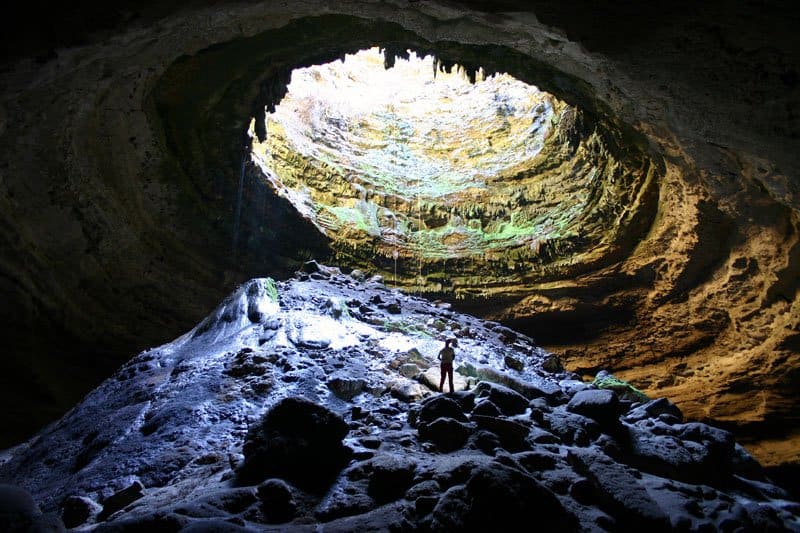 The Devil’s Sinkhole, for the adventerous cave-divers out there, plunges into the earth a staggering 121m in Texas. Archeological evidence suggests this particular sinkhole was sacred to the Native Americans living in the area previously. 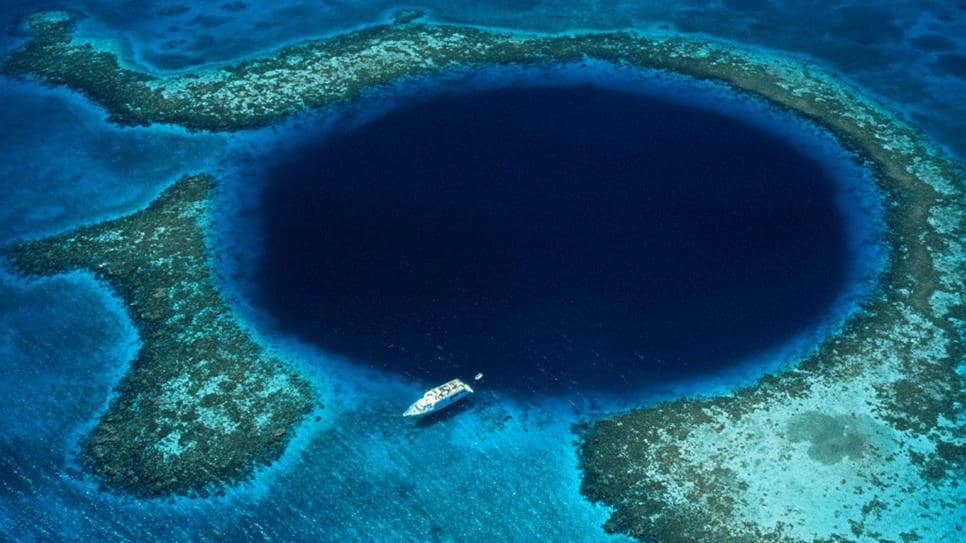 Oceanic sinkholes are some of the most beautiful around. The Great Blue Hole in Belize is easily the very best of them. This massive sinkhole is 300m across and 124m deep. The center of the hole is completely blue, with the surrounding water being a lighter shade. 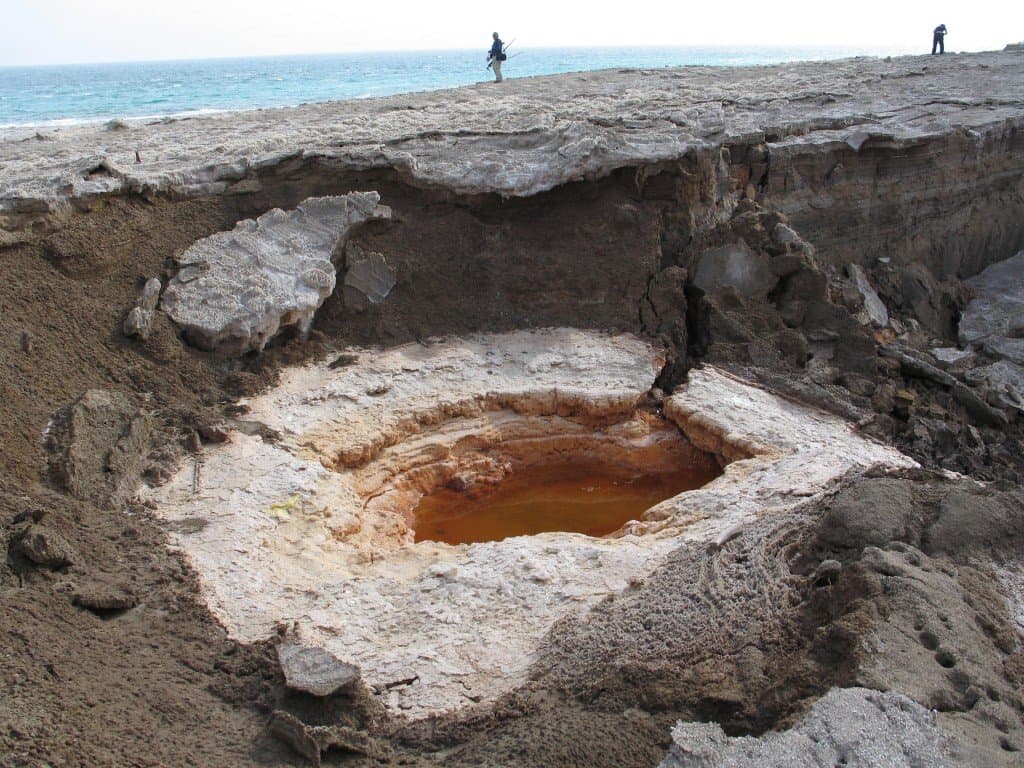 The Dead Sea Sinkholes in Israel are rather large, and stem from a water shortage in the area. Tourism and chemical industries certainly aren’t helping the situation, unfortunately. Over 3,000 open sinkholes have formed along the coast of the Dead Sea. 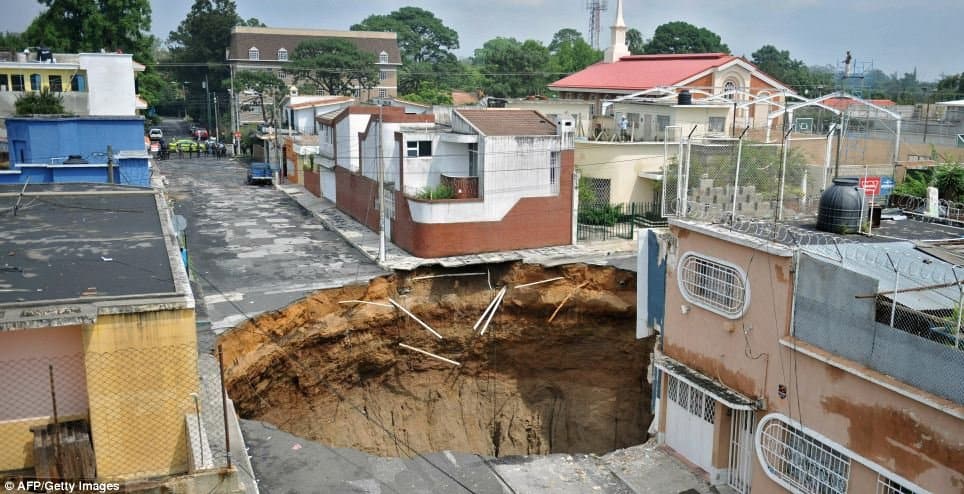 Guatemala City has been plagued by numerous sinkholes opening directly in the center of the populated metropolis. The 2010 hole, however, was one of the worst. The sinkhole swallowed a three-story factory, killing 15 in the process. The hole is 20m across and 30m deep. 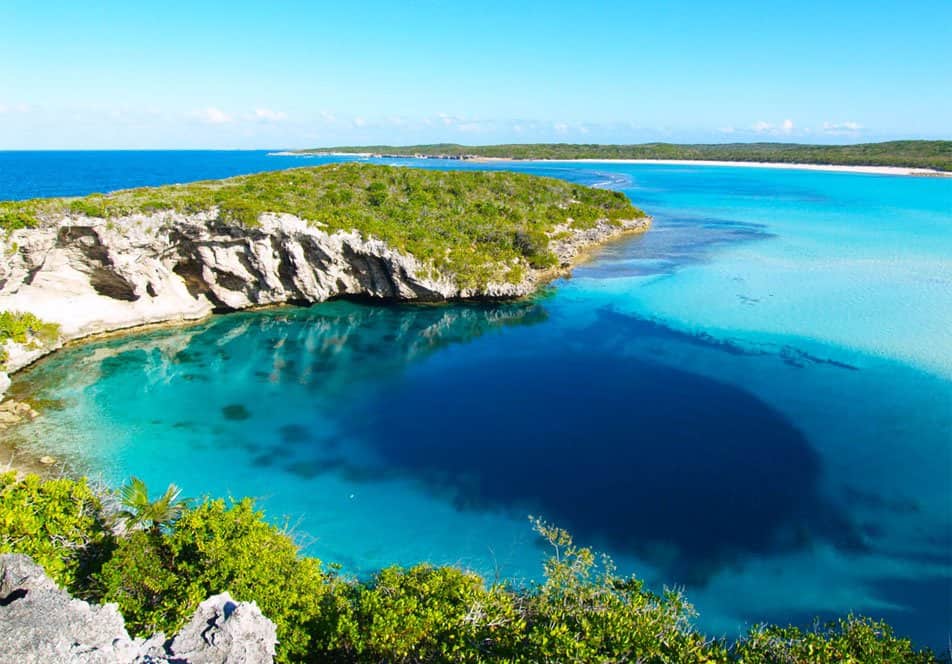 Another water-based sinkhole, Dean’s Blue Hole in The Bahamas is the world’s deepest underwater sinkhole known to man. The hole is 202 meters deep in total, but the opening diameter is 25-35 m. Upon descending into the hole, the cavern opens up to a diameter of 100 meters. 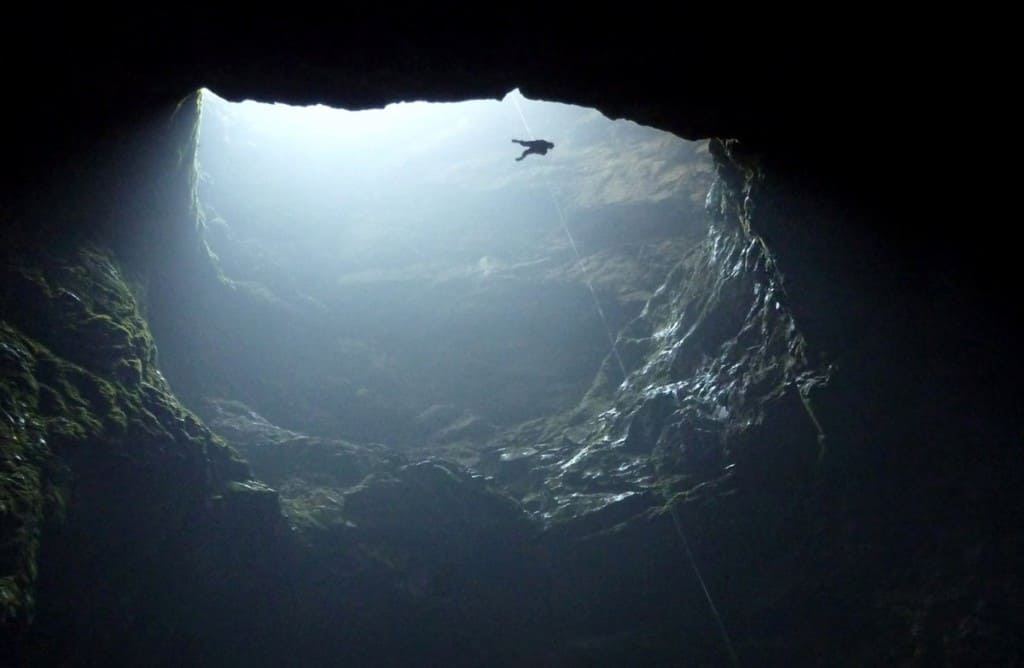 New Zealand is a country known for its magical countryside. The Harwood Hole, located in Abel Tasman National Park, is just one more reason to cement that fact. The hole is 50 meters wide and descends vertically 183 meters. In total, the depth of the Harwood Hole is 357 meters. 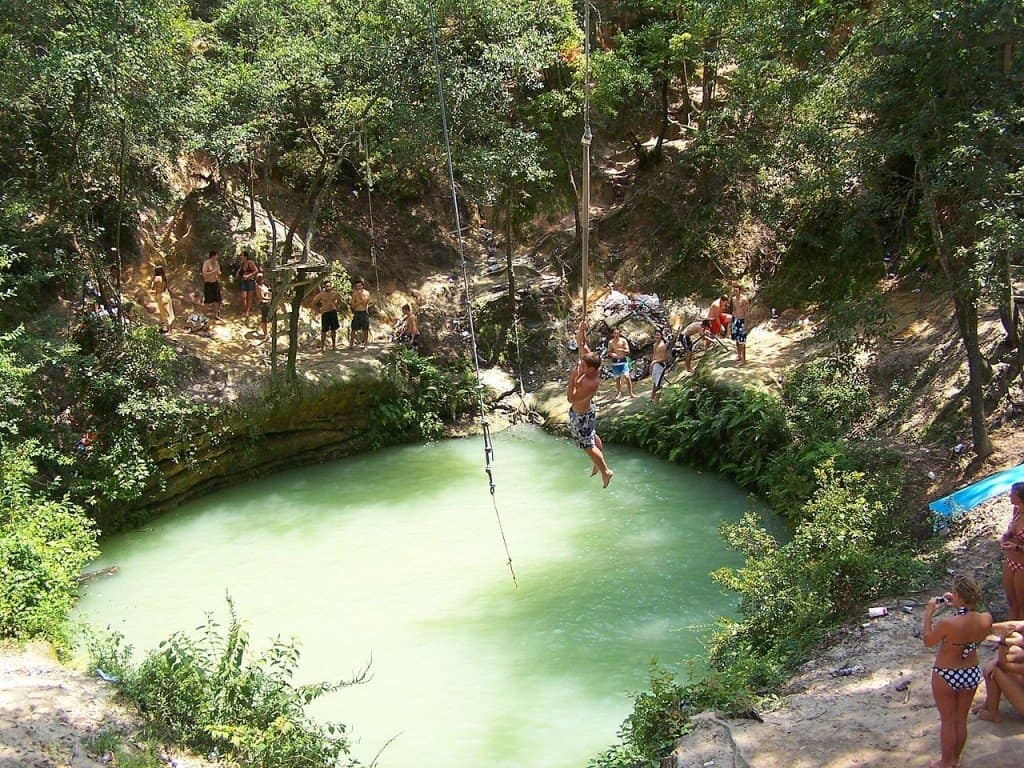 Located near Hawthorne, Florida, The Devil’s Toilet Bowl may have an odd name, but it’s worth a visit or two. The sinkhole has been filled by a lake, and is perfect to jump in and take a refreshing swim. A forest surrounds the hole, making it quite scenic. 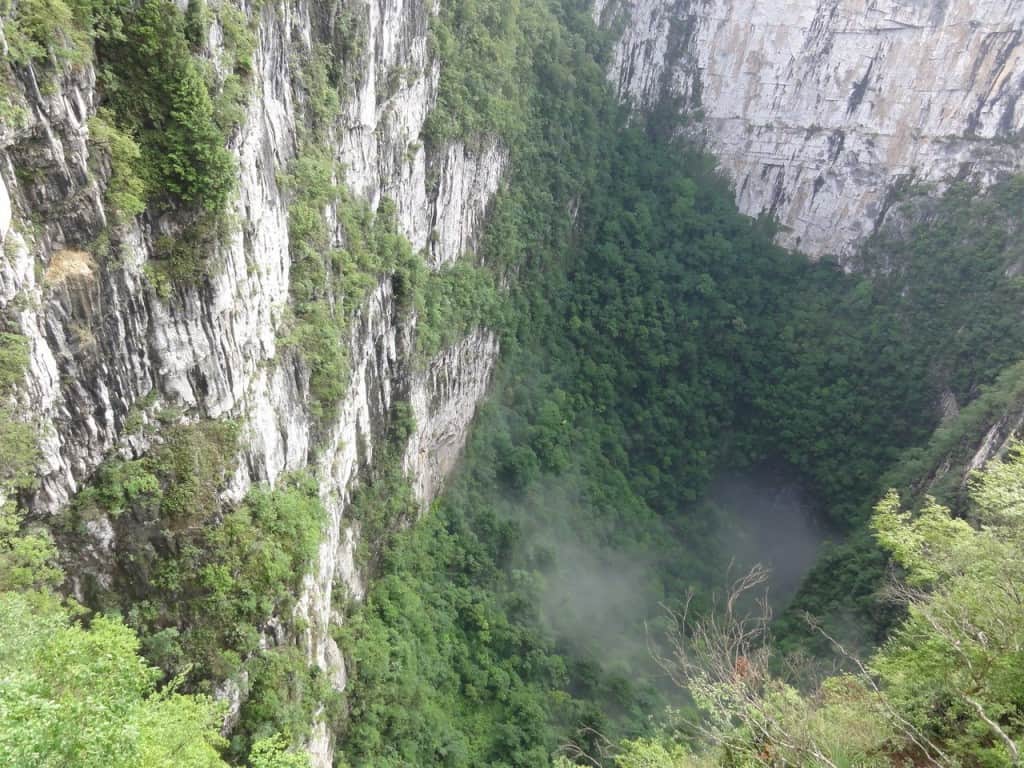 Throughout China there is a wide range of landscapes. The Heavenly Pit sinkhole is located in Xiaoxhai, Tiankeng, within the Chongqing District. The hole is 662 meters deep, 626 meters long, and 537 meters wide in total. The upper bowl is 320 meters deep, and the lower bowl is 343 meters. It is a double-nested sinkehole. 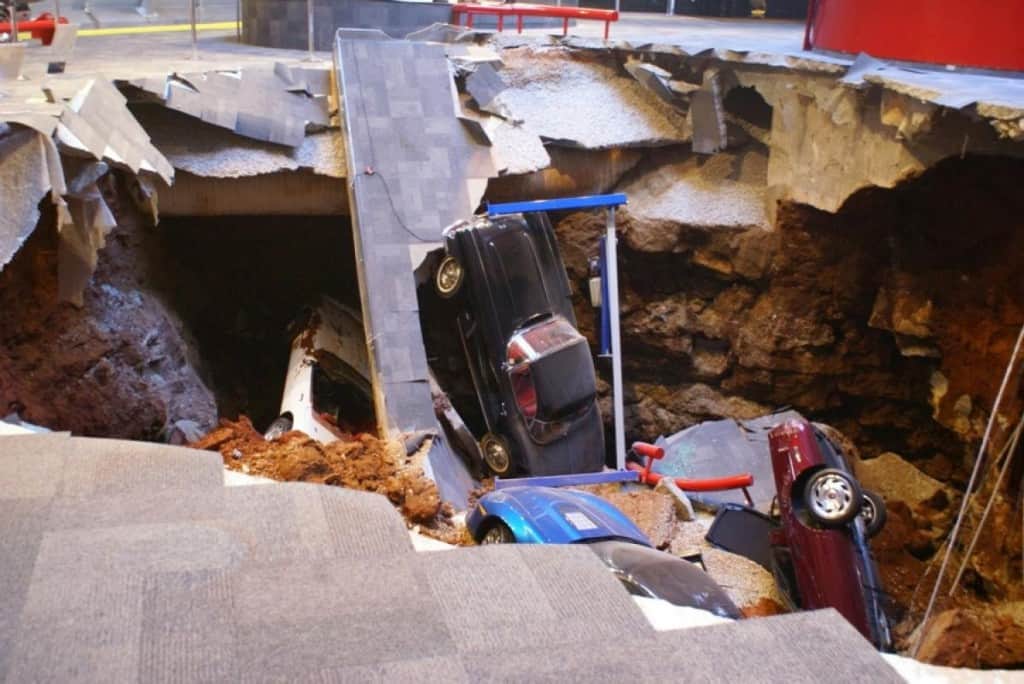 Bowling Green is a bit of a hectic place in Kentucky for anyone interested in building a home or business. The land is dotted with natural sinkholes capable of opening at any time. One sinkhole stopped the construction of the Trimodal Transpark when it opened, creating a 60 meter-wide hole at the construction site. 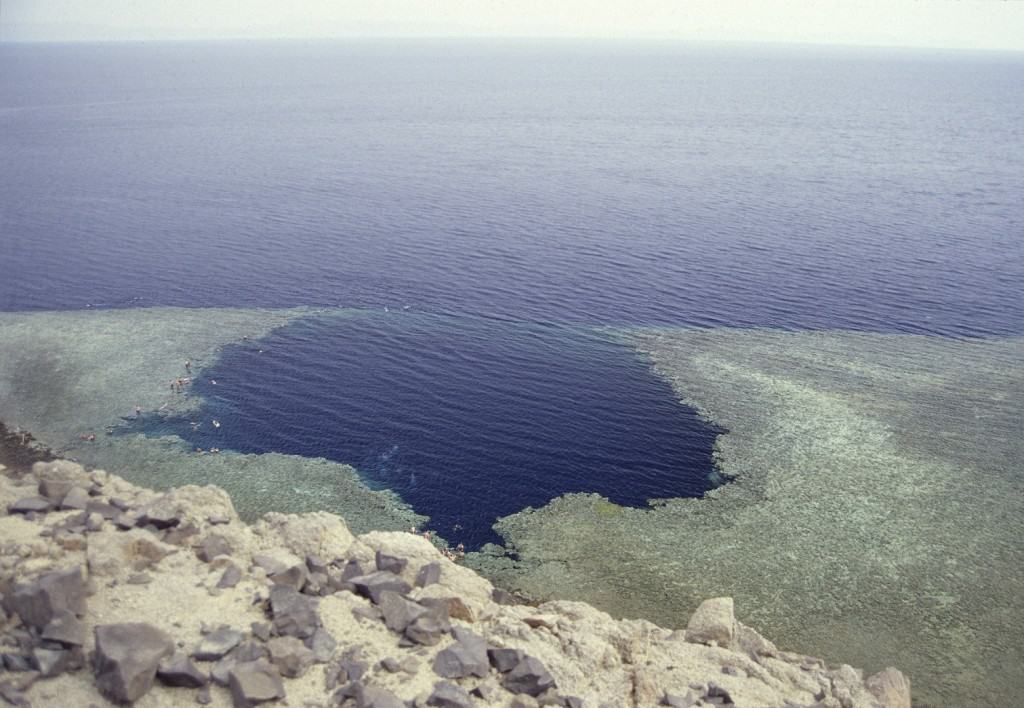 The Sinai Blue Hole is quite the popular diving site near the small town of Dahab, which is along the coast of the Red Sea. The submarine sinkhole is about 130 meters deep, and has become known for the scuba and free-diving attempts taken place there. It has been labeled as “the World’s most dangerous dive site,” though. 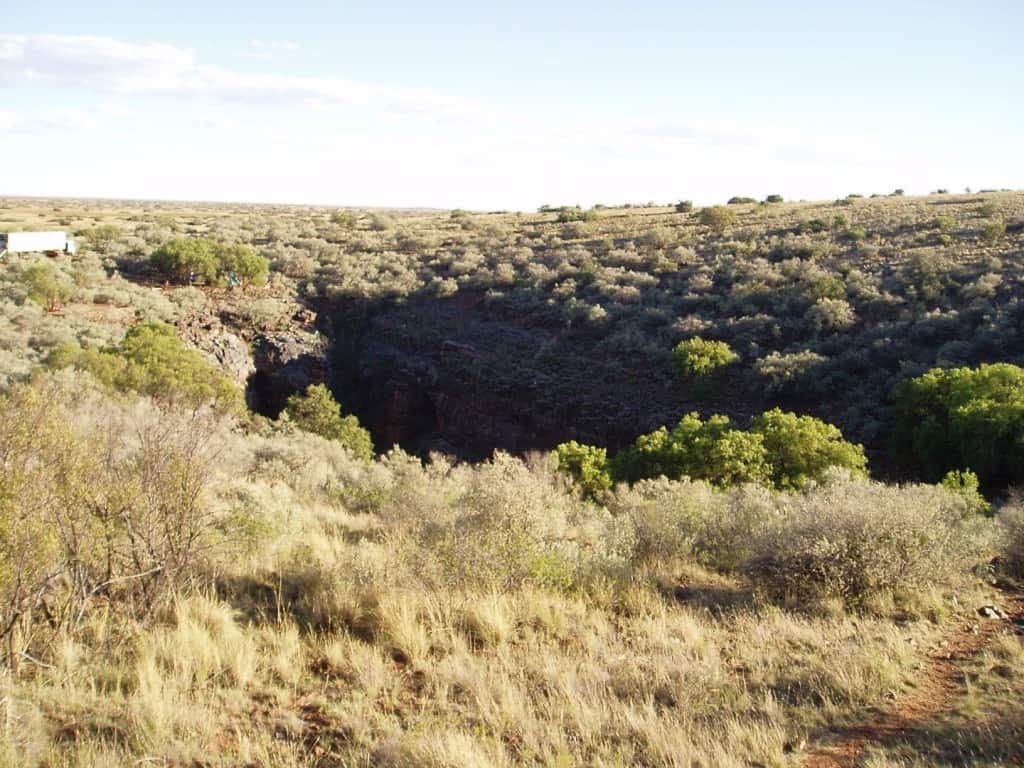 The Boesmansgat has become known as the “Bushman’s Hole,” and is considered the third-deepest freshwater sinkhole in the entire world. The hole is about 270 meters deep, and located in the Northern Cape province of South Africa. Amateur diver Mike Rathbourne was the first to explore the sinkhole in 1977. 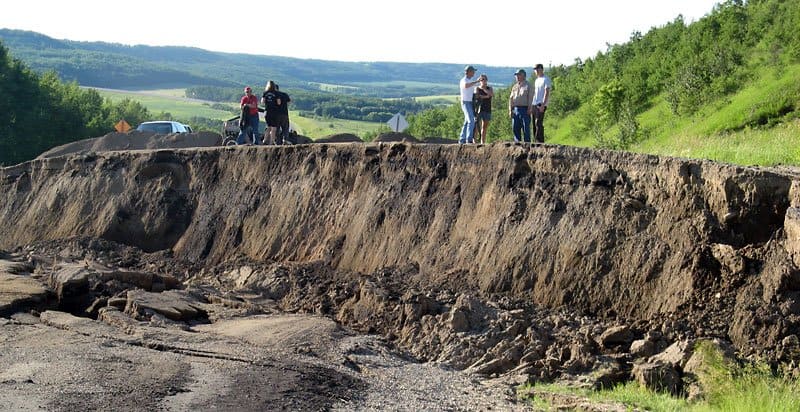 The most extreme sinkhole to occur in Canada happened on the Manitoba highway. The Winnipeg Highway sinkhole completely sucked in parts of the road, with over 200 meters of highway disappearing. Some parts of the roadway sunk into the earth about 8 meters in total. 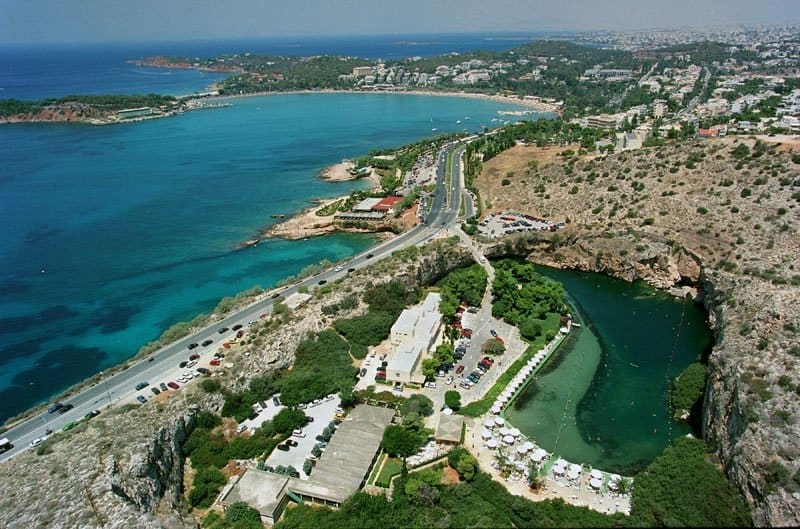 The Vouliagmeni sinkhole is considered extremely dangerous due to four divers known to have died within the sunken lake. Underwater currents feed into the hole, and a depth of 35 meters makes it a bit shady for most people looking to go swimming. 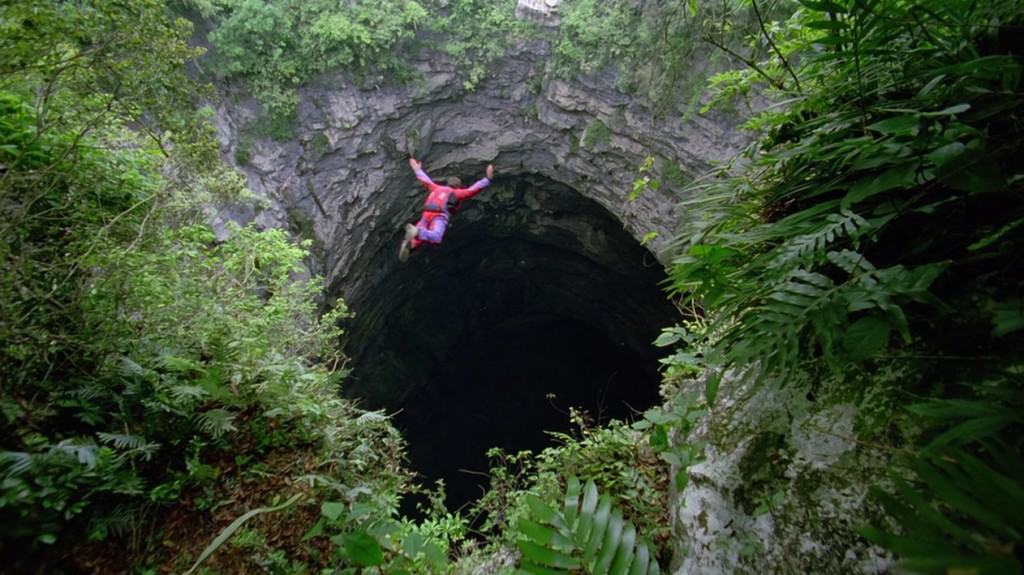 The Cave of Swallows, located in Mexico, is open-air cave with a 333 meter drop from the lowest side and a 370 meter drop from the highest. A skyscraper can easily fit inside the entire pit, which is known as the largest cave shaft in the world. Many birds live within the hole, which gives it the name.