For those who don’t know, Kickstarter is an online, United States based organization that offers a crowdfunding platform for creative projects. In other words, an individual looking to obtain funds to get their ideas off the ground can seek the help of the general public using Kickstarter. Some really cool projects have come into existence thanks to the website, but on the other hand, there have been a lot of strange ideas put up. Some of them — and we have no idea why — actually get funded. Below is a list of some of the weirdest ones. 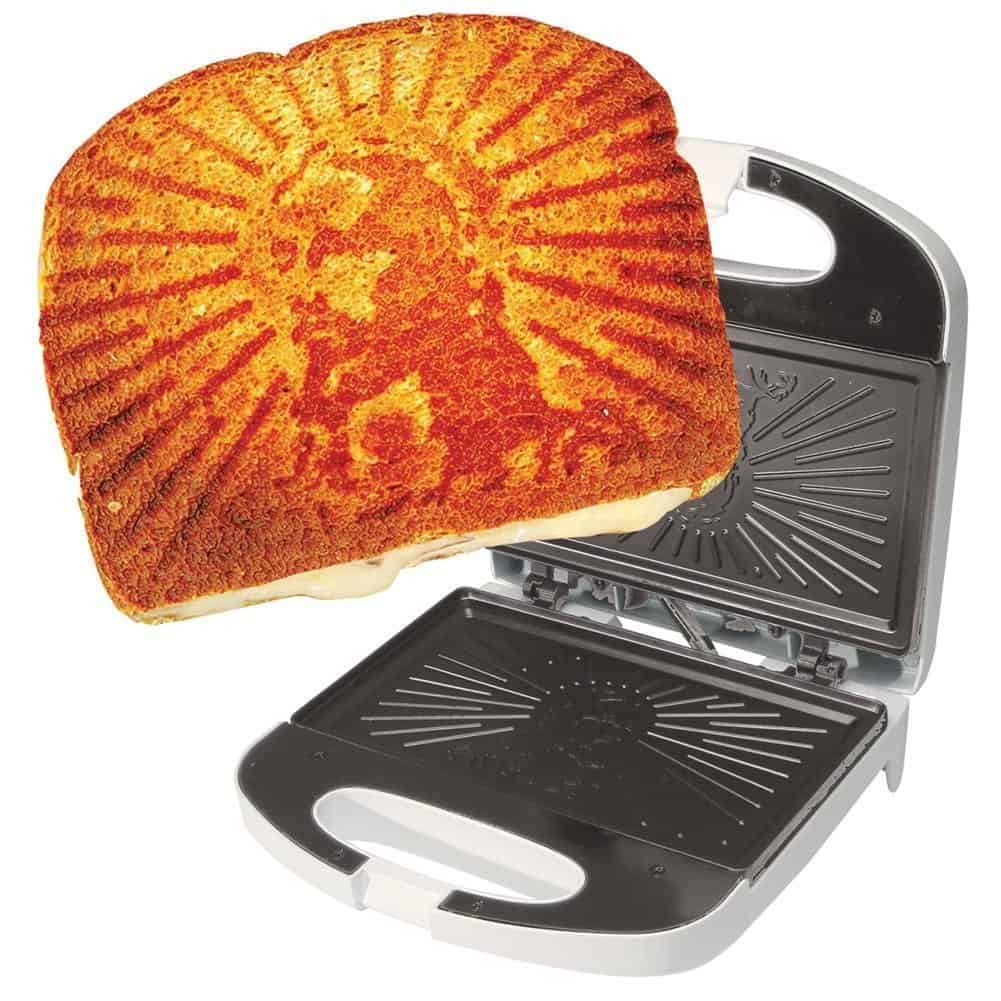 No longer will the people of this world have to pay an arm and a leg to get a grilled cheese with a slightly Jesus-shaped burn mark on it. Thanks to the funding from Kickstarter, everyone can have their own Grilled Cheesus maker. Whether or not it tastes a little more divine than other sandwiches has yet to be determined. 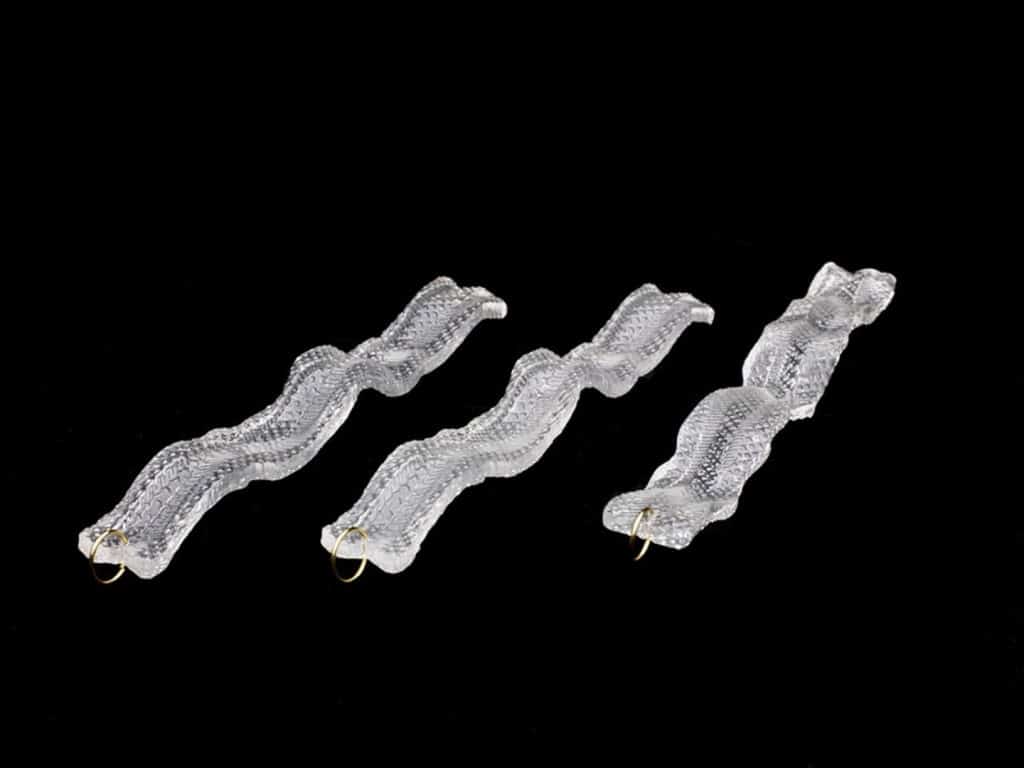 That’s right, everybody. You can now purchase shiny crystal bacon to decorate your house. Imagine these dangling from your Christmas tree, or hanging in the windows of your home. 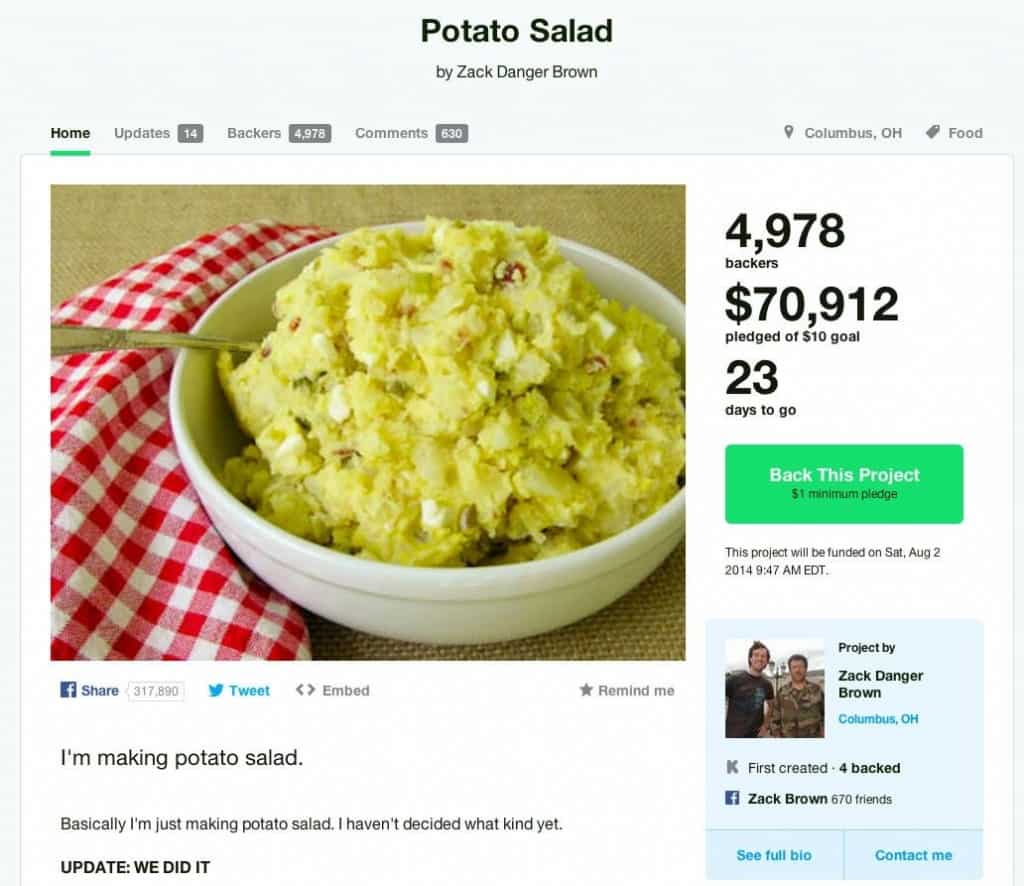 A man by the name of Zack Danger wanted potato salad, and looked to the Kickstarter community to help his dream come true. Apparently, people really could relate to Zack, resulting in over $70,000 being funded. Surprisingly, his initial goal was only $10. 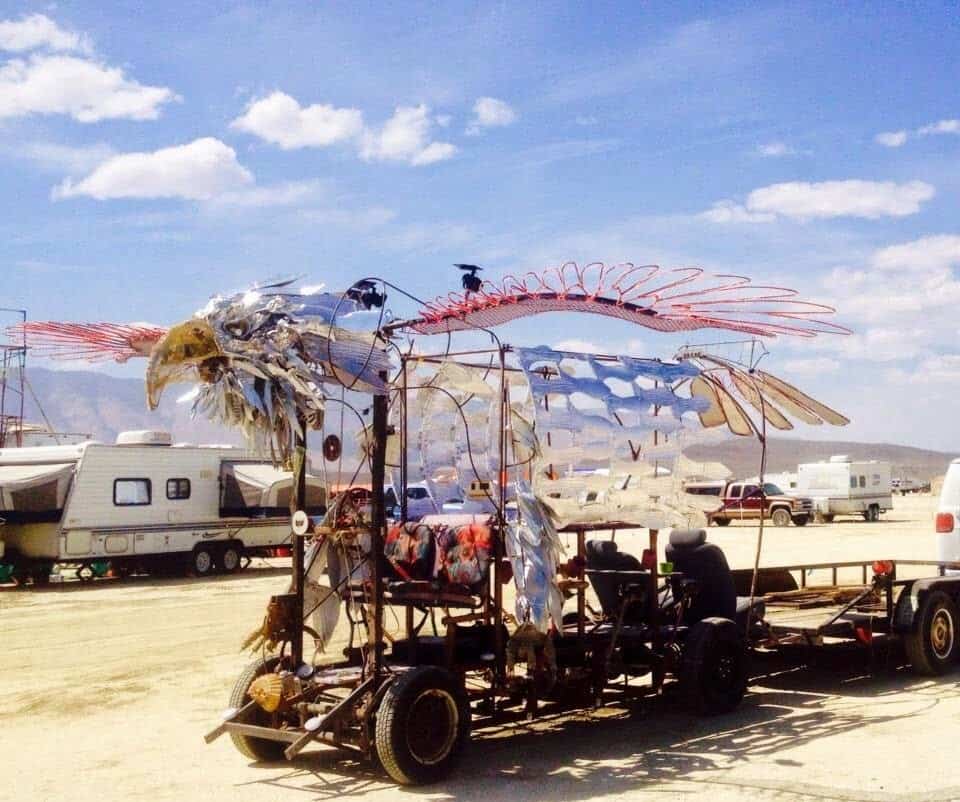 What is the Shamancycle, you may ask? Well, according to its description on Kickstarter: “A Giant 10-person Eagle Bicycle with Beautiful Metal Wings and Flaming Eyeballs! Visionary Green Art Transportation!” Of course it is! And, of course the public deciding having this beauty around was completely necessary, because it was funded with money to spare.

“It’s a giant inflatable sculpture of Lionel Richie’s head,” was all it took to bring in the necessary funds. What more is there to say, really? The giant inflatable head was thus brought into existence and displayed at British music festival, Bestival. 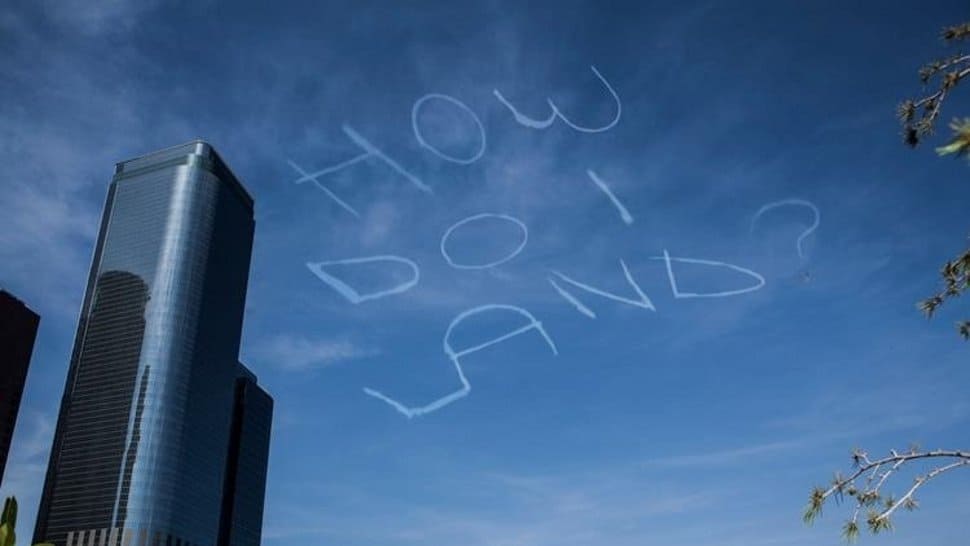 Once upon a time, there was actually a project on Kickstarter to raise money to “write stupid things with clouds in the sky“. It was proposed by a comedian named Kurt Braunohler who, after raising the money, got a skywriter to put “HOW DO I LAND?” in the sky. 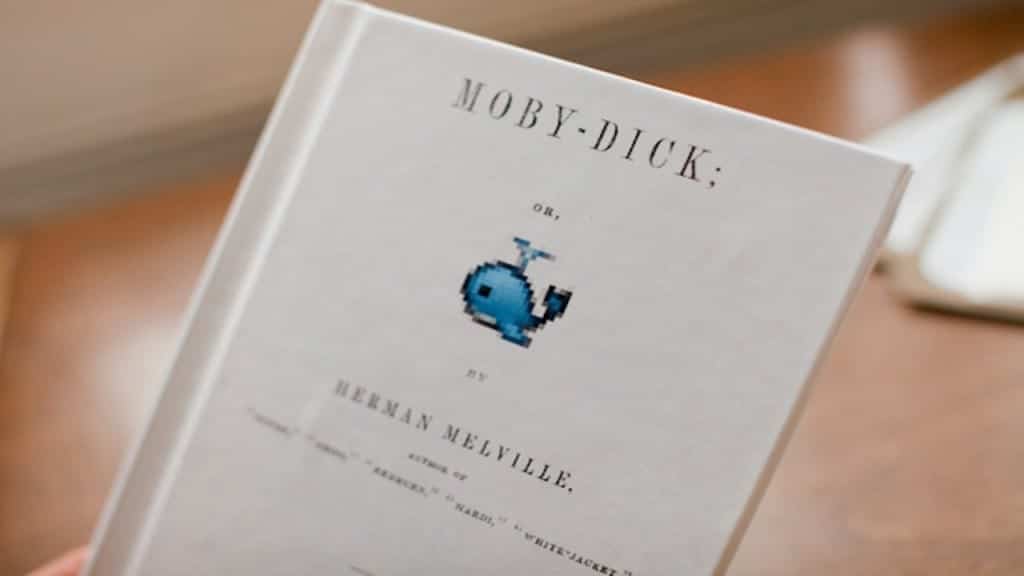 Someone in the world has so much time on their hands, that they had the grand idea to take Moby Dick and translate it… into emojis. That man is Fred Benenson. Apparently people wanted it to happen, too, because it was funded and now exists somewhere in the world. Maybe this is the answer to get today’s tweens back into reading. 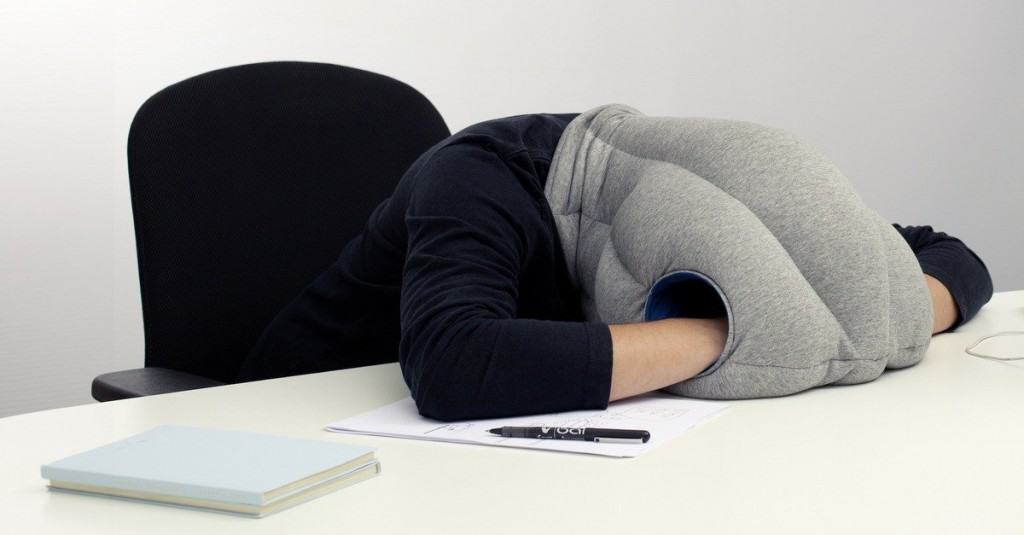 It may look weird, but there is no denying that this unique pillow also looks like the best nap you’ve ever taken in a place where a comfy couch or bed isn’t available. The Ostrich Pillow was so popular and well funded with its original product that the makers have since added other products, such as the mini Ostrich Pillow. 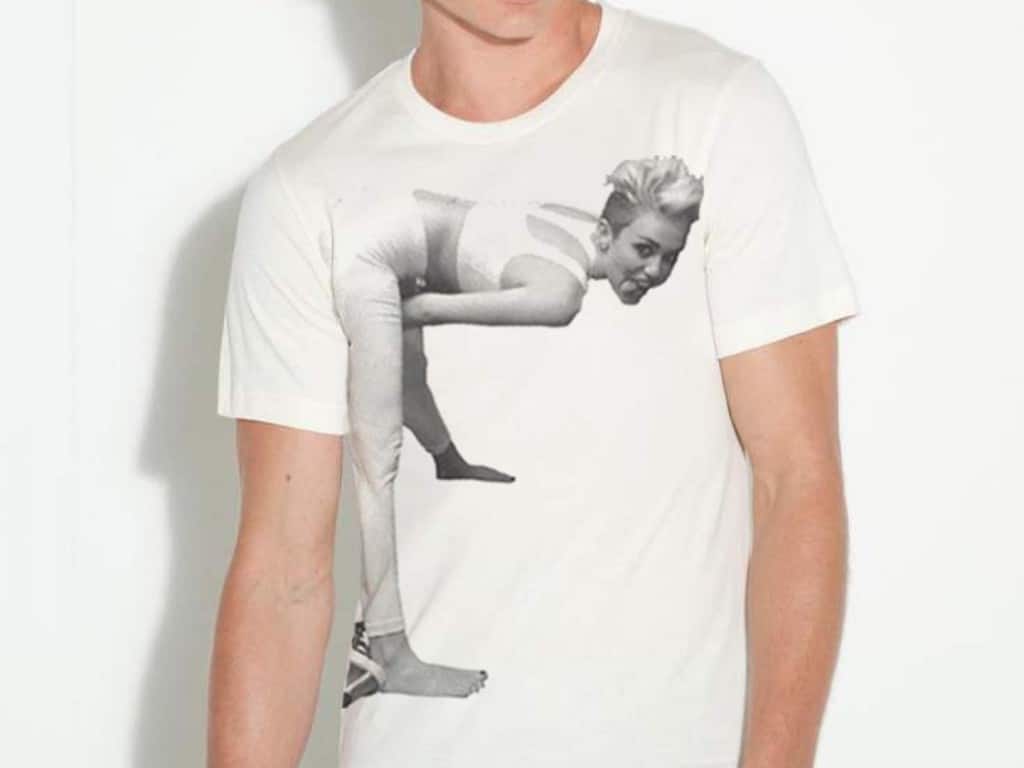 Thanks to Kickstarter and the people of the Internet, you can now own and wear this adorable t-shirt of everyone’s favorite twerking pop star. Never has a simple white shirt looked so classy. We’re joking, of course. Poor Hannah Montana is probably rolling in her grave. 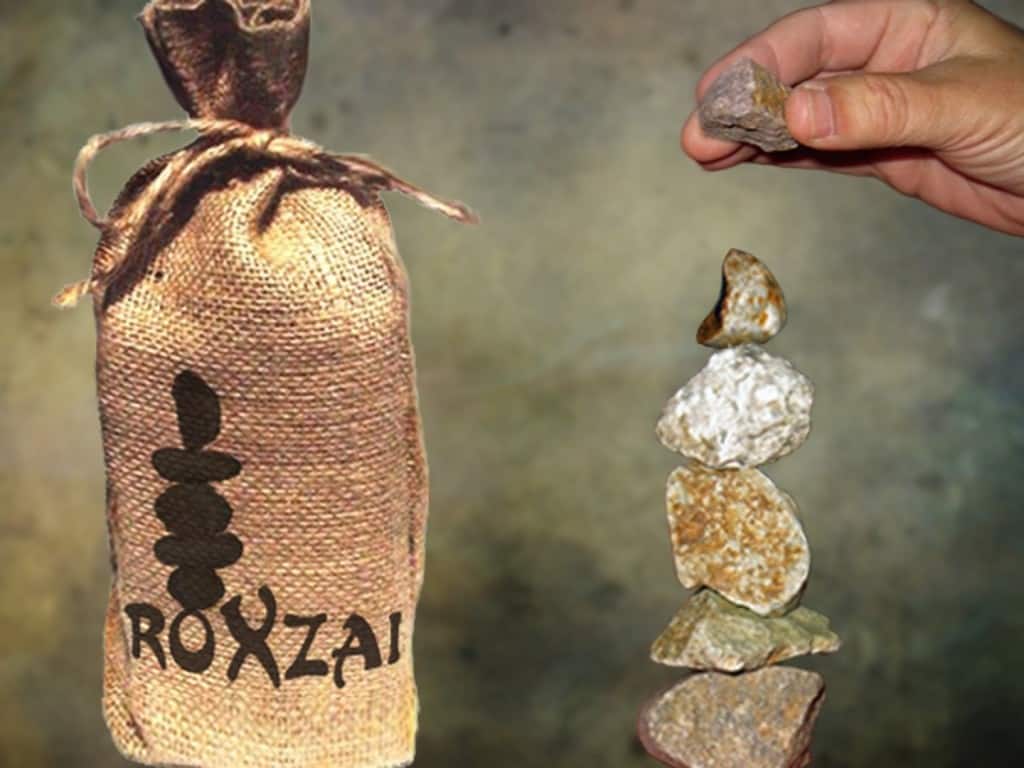 Roxzai, though it may look like a neat game based on the rugged, natural looking packaging, is actually one of the most pointless things we’ve ever heard of. How to play, you ask? You pour the rocks out of the bag, and you stack them. That’s it. You can easily make this game in your own backyard, yet it somehow got enough money to happen. This is the world we live in.

Launch A TARDIS Into Space 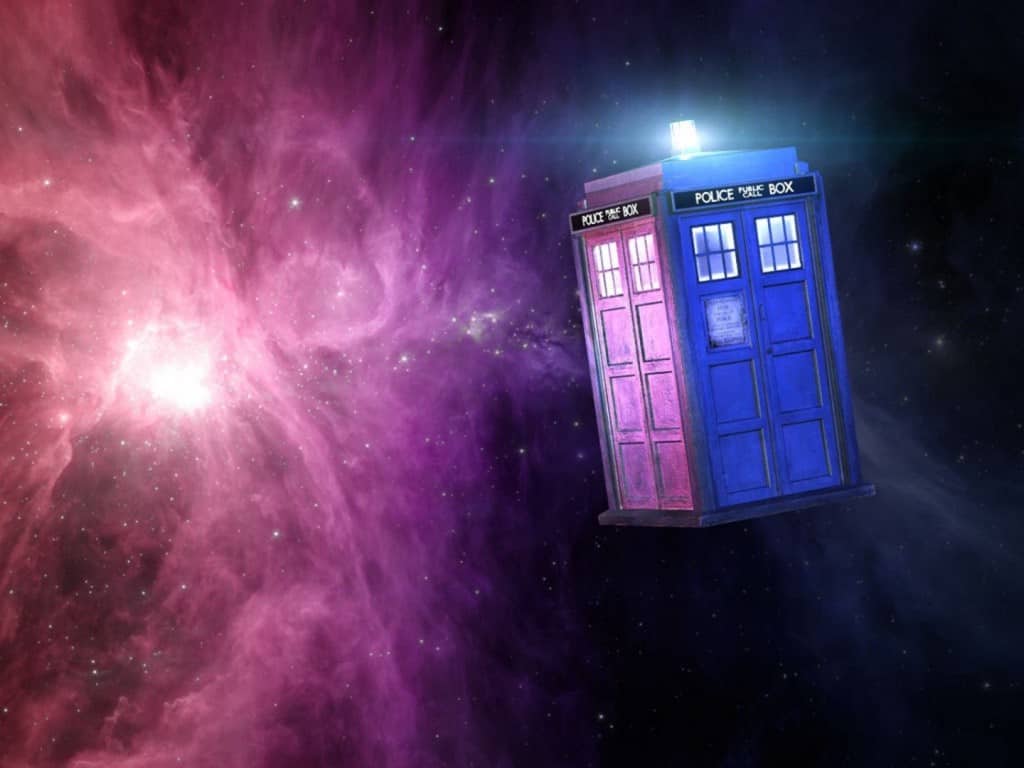 A very ambitious young man named Travis had the idea to launch a model TARDIS from the popular BBC show, Doctor Who, into space. After raising more than $3,000, he did just that… kind of. He attached the TARDIS model and a stuffed monkey named Timmy onto a board, and then attached that to a weather balloon. A camera went up with it, so that Travis could upload the video of it to YouTube. 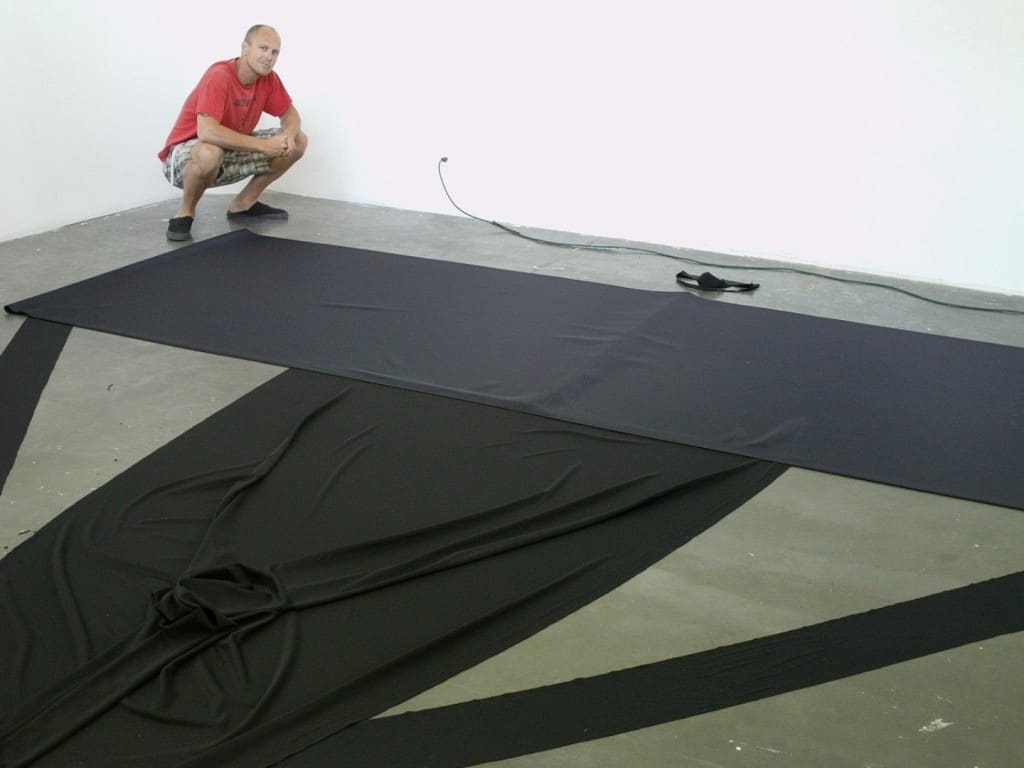 Michael Barrett, a man with a very special kind of mind, decided to raise money to create the world’s largest jockstrap. Why? Good question. He was able to fund it, though, and to this day it stands as a Guinness World Record. 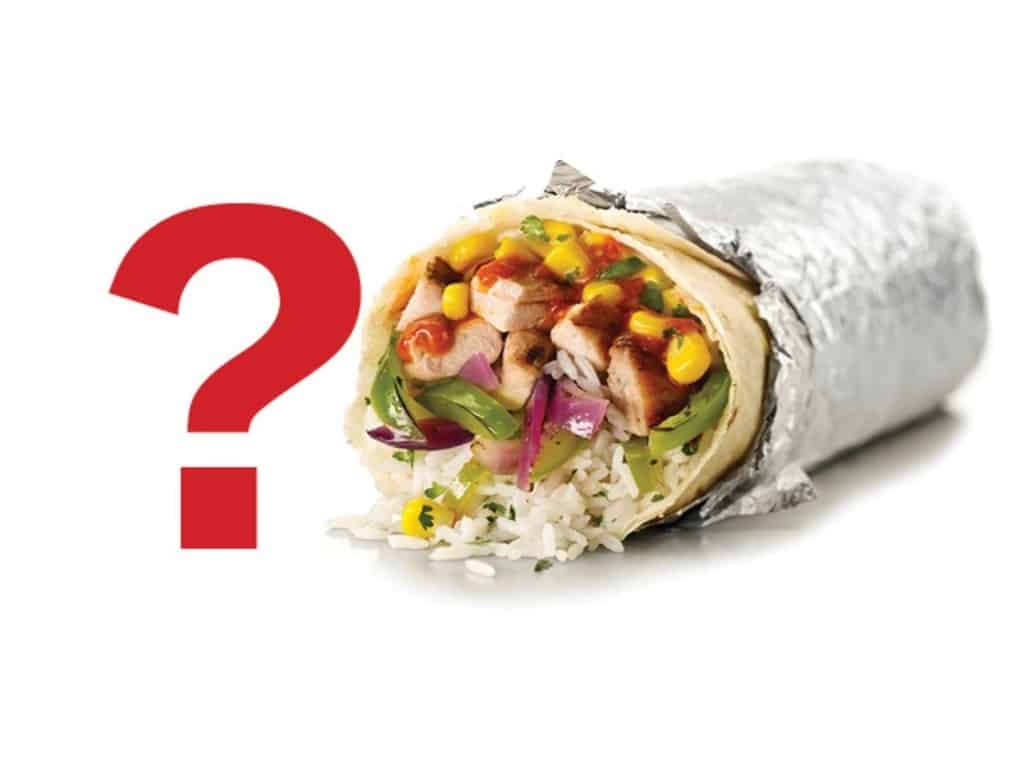 A student by the name of Noboru Bitoy asked the world for $8 to buy a chicken burrito from America’s beloved, authentic, Mexican cuisine restaurant, Chipotle. Not only that, but Noboru promised to graph the burrito on a scale of deliciousness. Naturally, such a world-altering idea brought in more than $1,000, which led to Noboru deciding to do the same thing — while skydiving. Now that’s… almost cool. 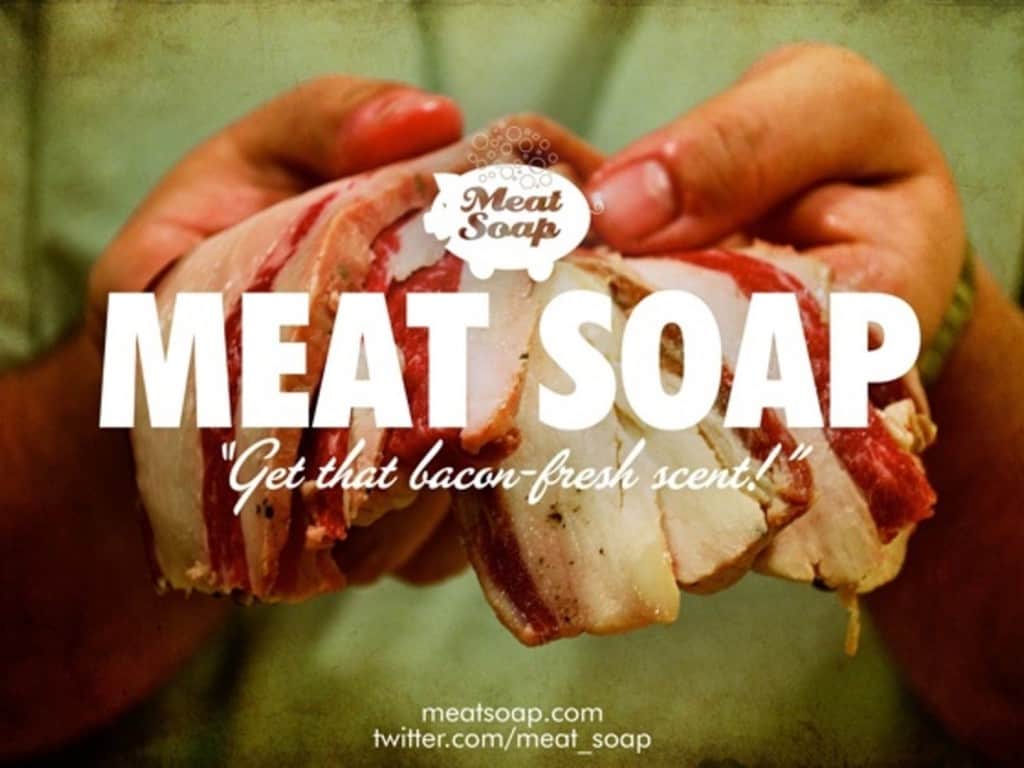 Have you ever wished you could smell like bacon, but still be clean? We haven’t. But, apparently many people did, because meat soap was funded and now exists for the meat-lovers of the world. 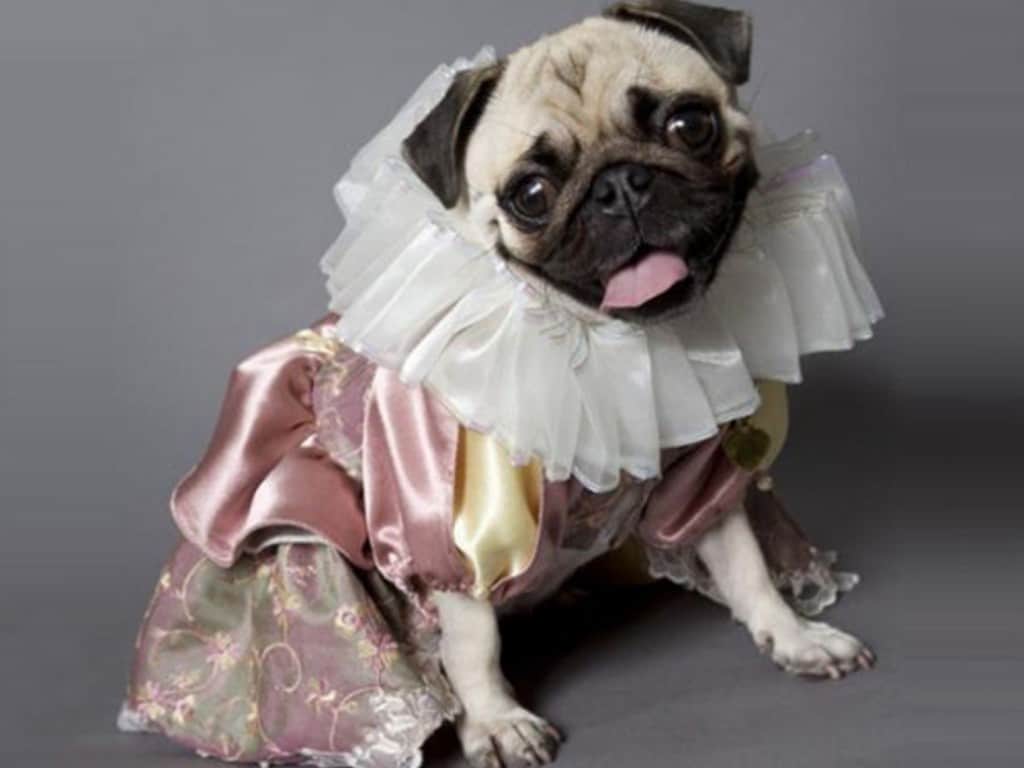 Shakespeare’s Hamlet is a beloved tragedy that is still held in the highest regards in world literature and playwriting. So, naturally, the next step was to recreate that play with a cast of pugs. Kevin Broccoli, the mastermind behind Pug-let, raised over $5,000 to bring his dream to life. 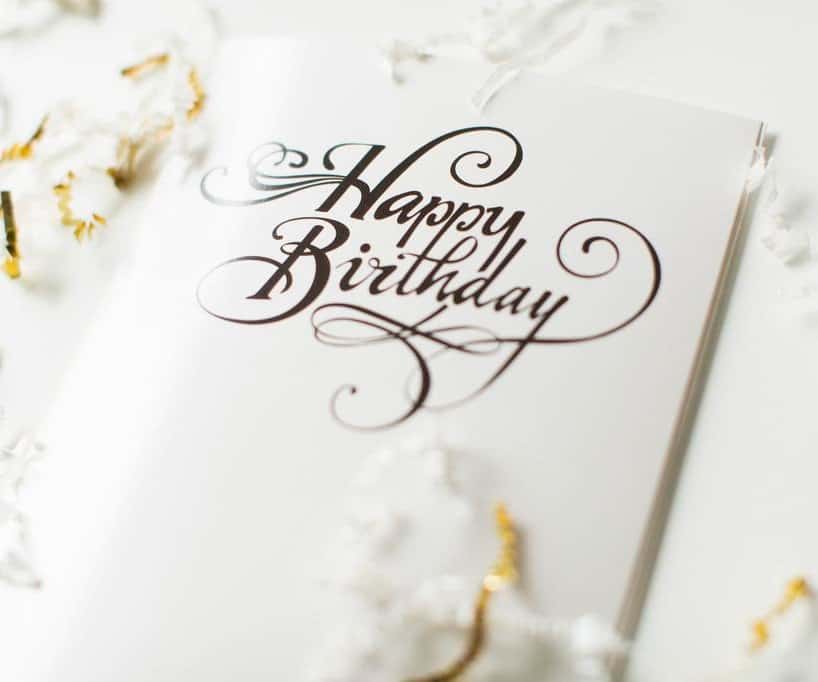 What a beautiful card, right? WRONG. Brothers Nick and Travis Peterson came up with this card to torture poor innocent souls on their birthdays. Once opened, it puts out a rather annoying birthday jingle for the reader, as many cards nowadays do. However, the great part is that even after the card is shut, it keeps playing. It will continue to make noise until it is destroyed, or the battery runs out. We bet the first option is more likely to come first. 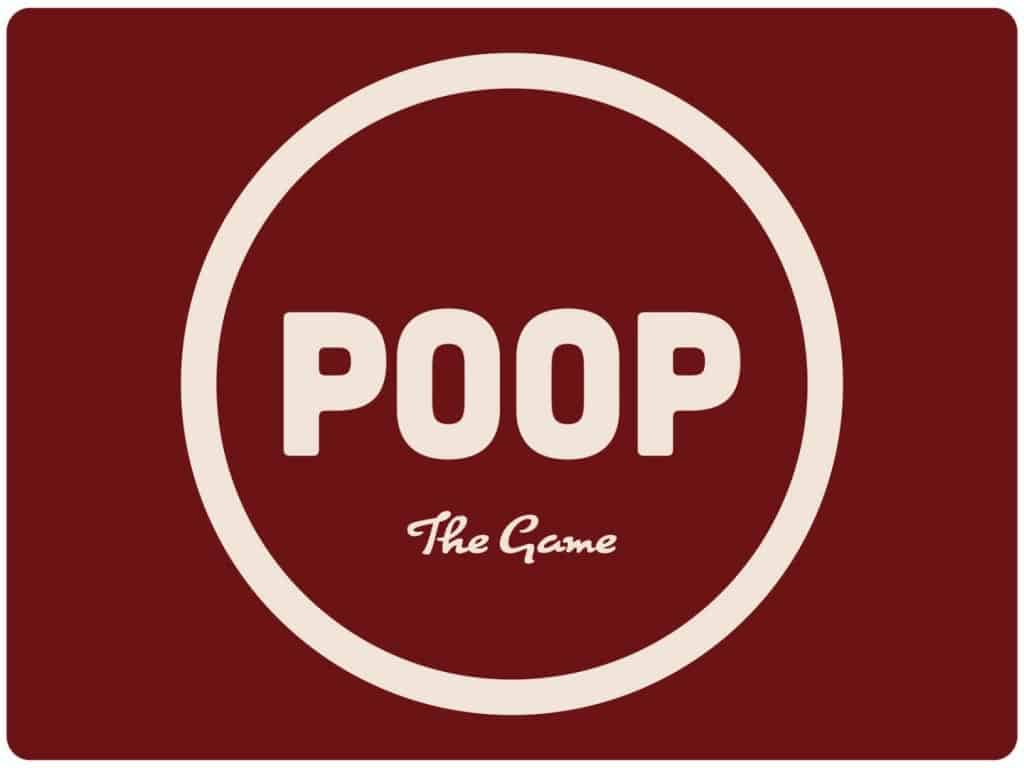 Poop is a card game, where all of the rules and actions have to do with, well, poop. On each players turn, they “poop” by playing a card, but have to try not to clog the toilet. Some cards have special instructions on them that the player must perform when played, such as making grunting noises or fart sounds. Sound like a game for you? Check it out yourself… we won’t judge. 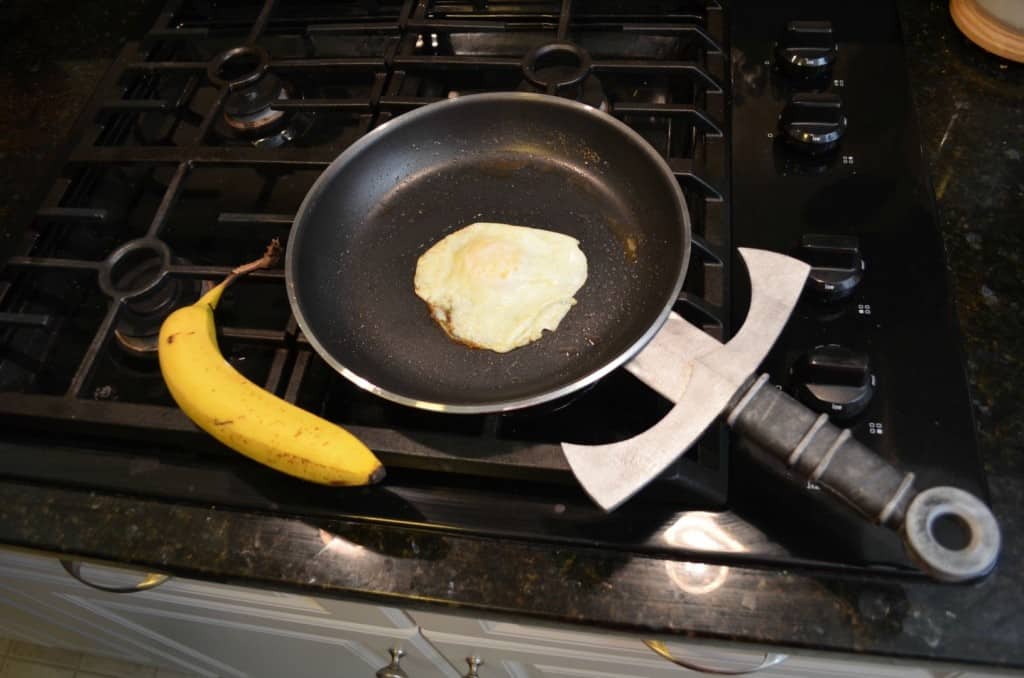 Need a way to make cooking for yourself or your loved ones more fun? Forget that — here’s how to turn cooking into an epic adventure. Use Combat Cookware, a unique line of products that combine medieval style weapons with modern cookware. The people behind Combat Cookware raised more than $40,000 to launch their product. 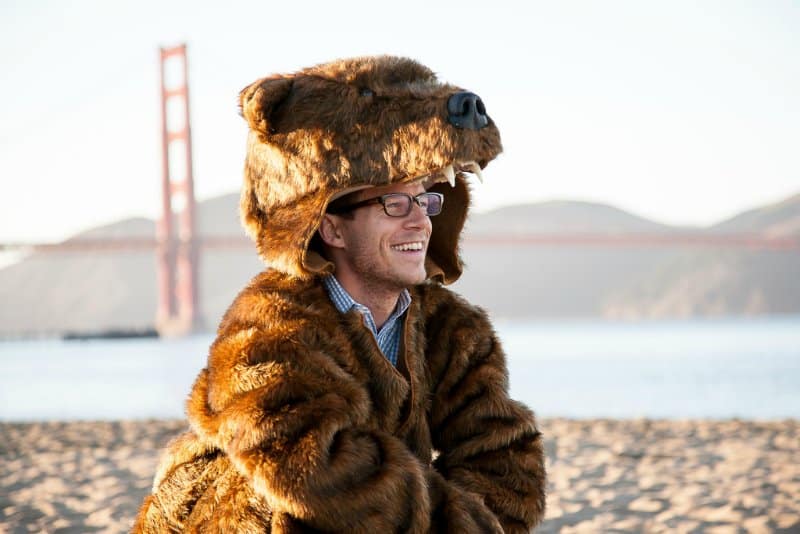 Griz Coat, as the name might suggest, is a coat that looks like a grisly bear. Apparently the public liked the idea so much that they blew past the necessary funds. In response, the people behind Griz Coat put out a polar bear coat option. 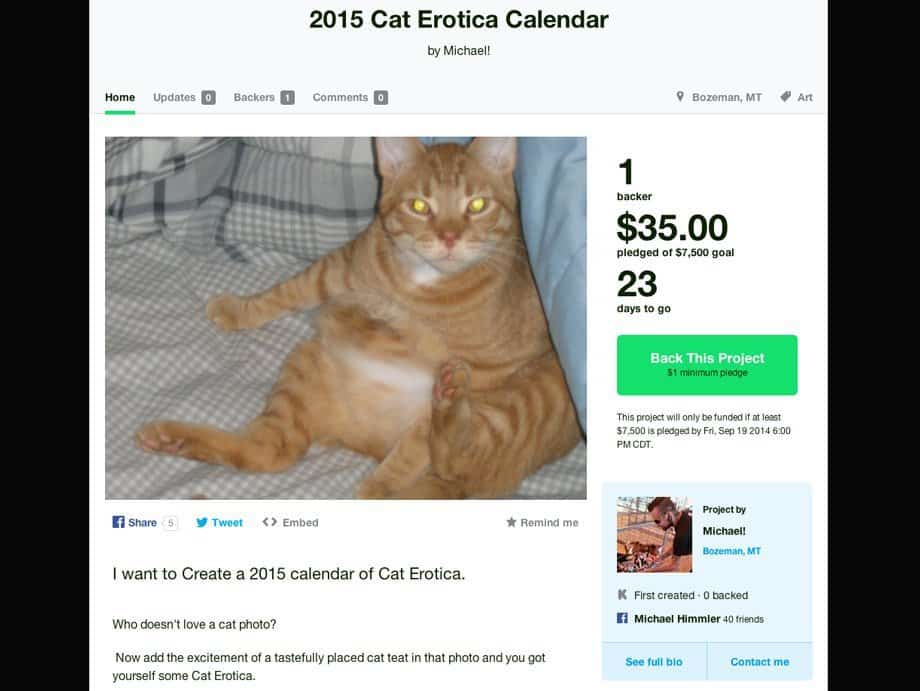 The ambition of humanity never ceases to amaze. Although this unique project never hit its goal, it deserves a spot on our list simply for its vision. Now that we’re halfway through 2015, don’t you wish you’d had a cat erotica calendar to go with this year? We sure don’t.