We’ve all played that game where you take a movie title and replace one word with another, or add a word (usually something rude, like “butt”) or see what hilarity ensues when just a simple letter is dropped. Illustrator Austin Light took it a step further and decided to draw what he thought purposefully misspelled movie titles would look like.

As you can imagine, the results are quite hilarious. Here is a selection of some of our favourite drawings complete with their own fake movie synopsis for each one. We would also like to give thanks to the users of Reddit who provided the ideas to help spark the artist’s imagination. It’s going to be a lot more difficult to take these movies seriously from now on.

Beauty And The Beat 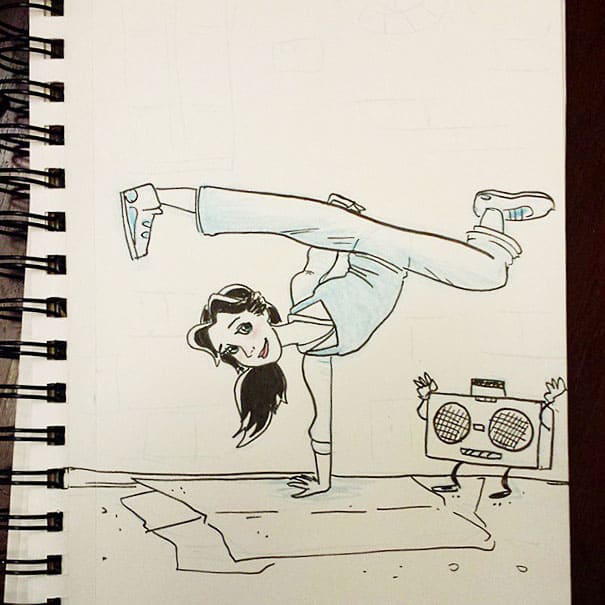 “After a witch turns her best friend into a dope boom box, Belle decides to enter France’s Got Talent. She crushes it.” – There is just no way Gaston could possibly step up to her game. 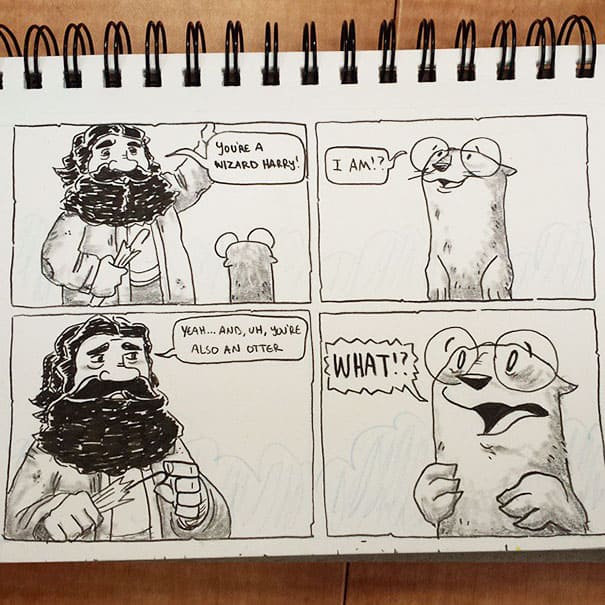 “A young boy finds out who, and what, he is. Magic ensues.” – It makes you wonder what the rest of the characters would look like. Would they also be otters? We’re imagining Ron as a gopher for some reason. 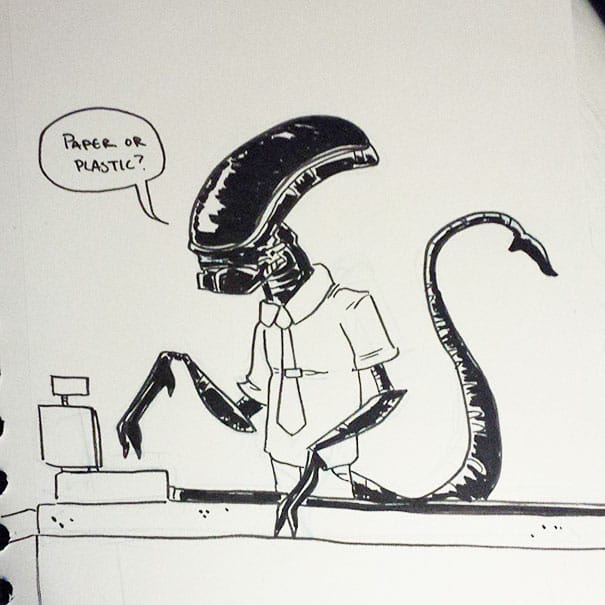 “The story of a lonely cashier named Alen who yearns for something more. Something like eating astronauts.” Poor Alen. All he wants out of life is to be able to scare the living daylights out of vulnerable space crew. 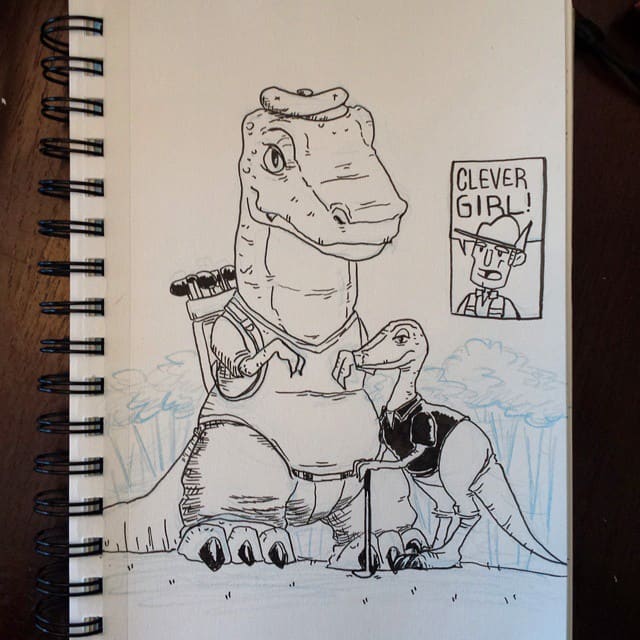 “Two dinosaurs set out to prove they’re more than just killing machines. Thanks to a loophole in the rules they find a spot on the PGA tour and golf their way to the top of the food chain.” And if they lose, they’ll just go back to grazing peacefully behind electrical fences. Right? Right?? 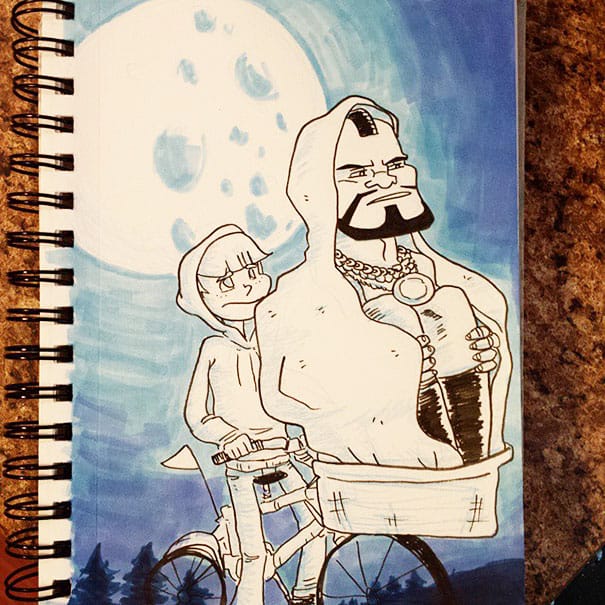 “A boy finds a jewelry clad alien who speaks exclusively in aggressive yet well-meaning catchphrases.” He also pities the government that tries to take a boy’s friend away from him. 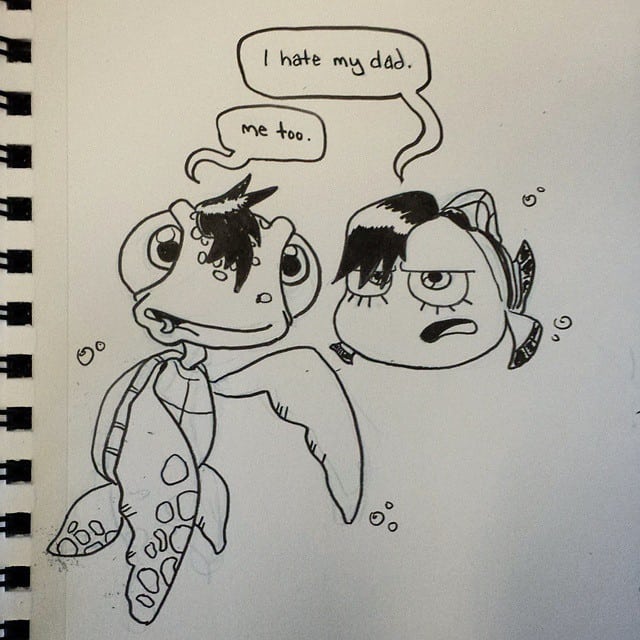 “An insufferable teenage fish runs away from home. His father contemplates searching for him.” Featuring a soundtrack by My Chemical Romance. 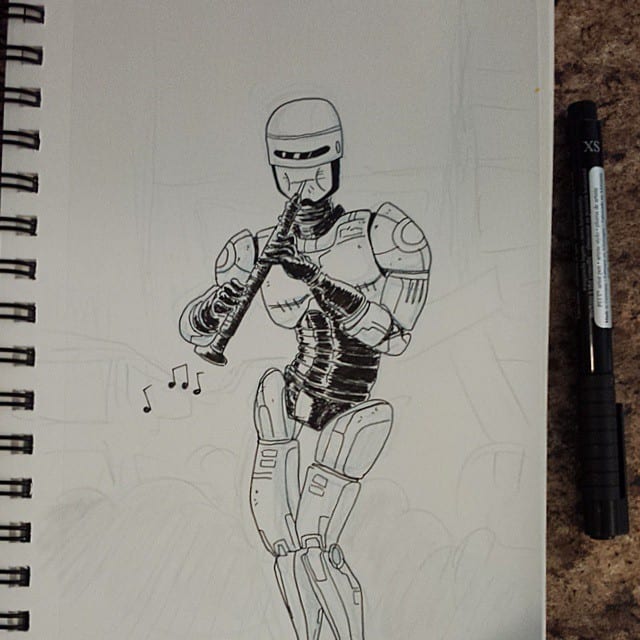 “The story of how a police officer works through his PTSD and adjusts to his new robotic implants with the help of the sexy soothing sound of his oboe.” Robots and wood instruments. Now there’s a winning combination if we ever did see one. 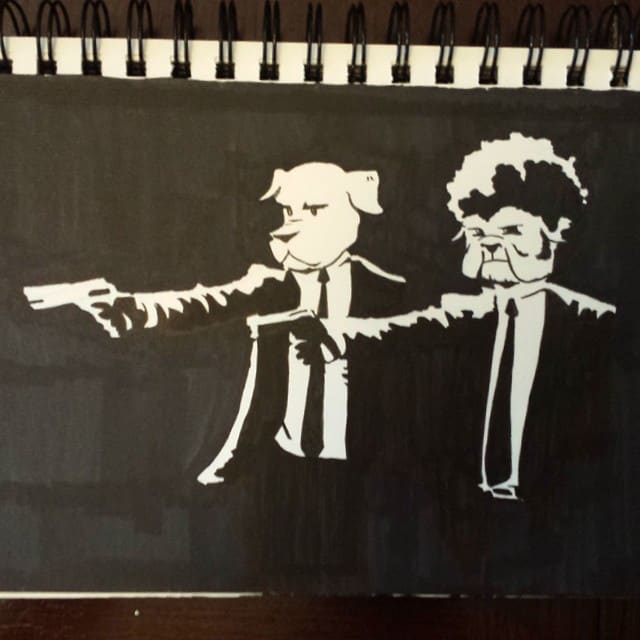 “Two mob hit dogs go after a poodle who wrote a slanderous op-ed about their boss.” Brings a whole new meaning to the ‘describe what Marsellus Wallus looks like’ scene, doesn’t it? 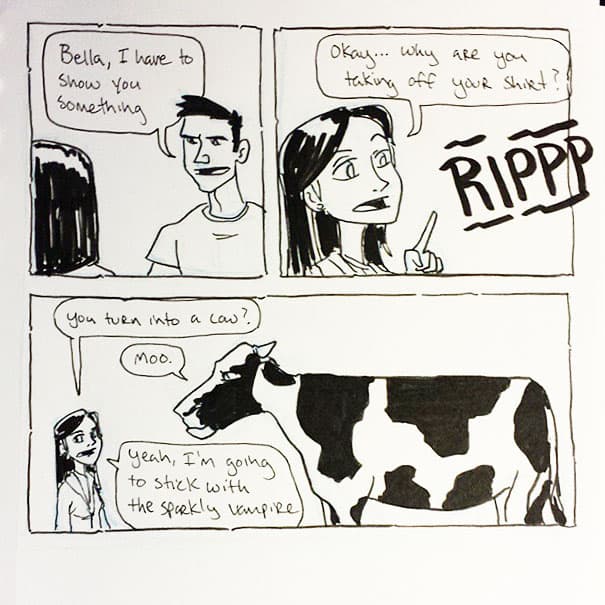 “A young man tries to win a girl’s heart with his new found bovine transformation skill. It doesn’t go his way.” We think it’s time to break out this classic line, “Still a better love story than Twilight.” 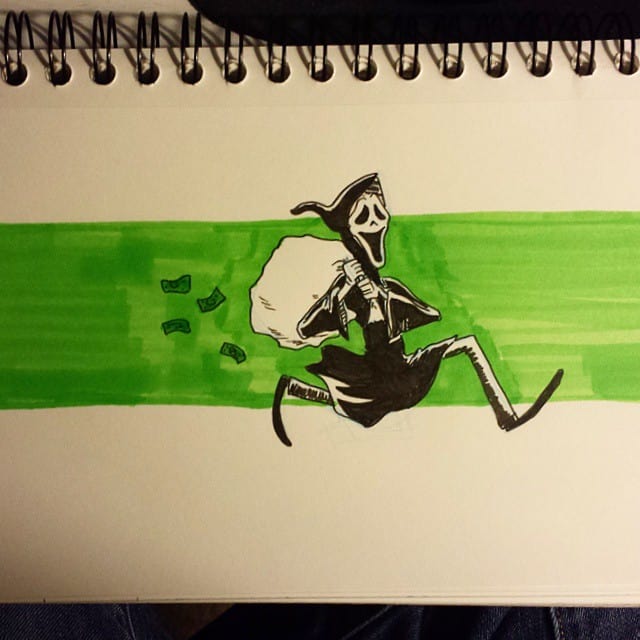 “A thief with a penchant for masks keeps getting caught in the act.” This sounds like the result of Payday if Steven Spielberg was involved. Also, just look at that happy face! 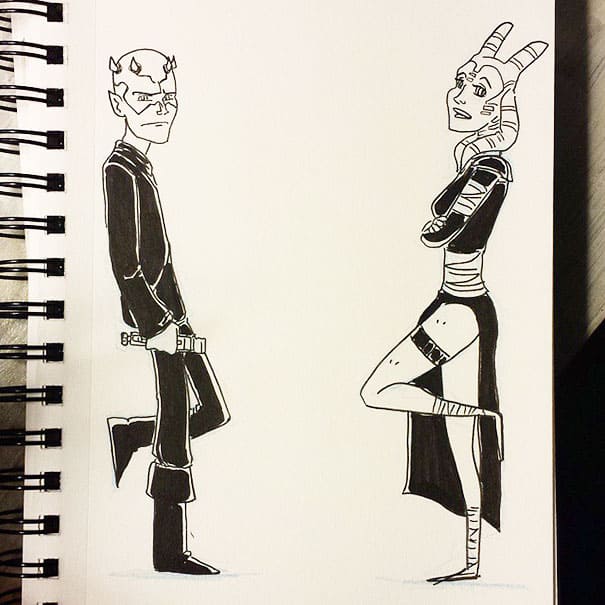 “Mr. and Mrs. Sith Two Jedi abandon the order for love. Also to shoot lightning from their hands. Because that’s cool.” Something tells us there may be a fan fiction story somewhere around the internet that already incorporates this idea. We welcome it! 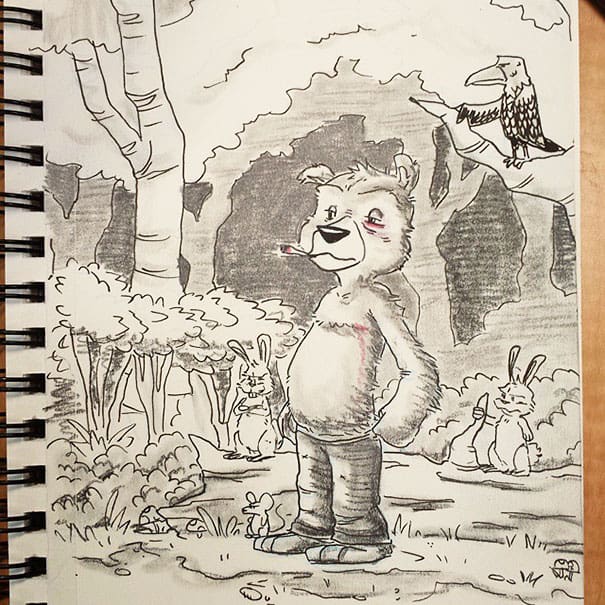 “When deforestation threatens his home, one feisty bear fights back.” From a grim tale about masculine identity to a bear’s revenge on mankind. With special guest director David Fincher.

The Lord Of The Rigs 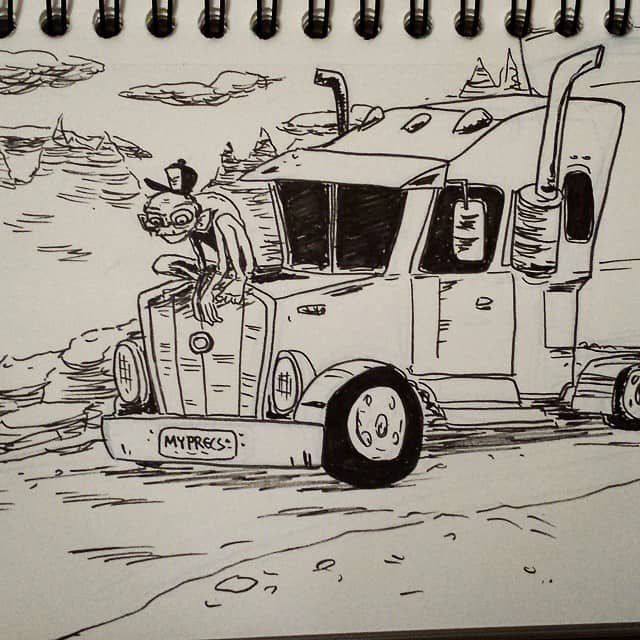 “The story of one man’s unhealthy obsession with his truck.” If you needed to get to Mordor on an epic quest, a giant truck would definitely be the way to go. 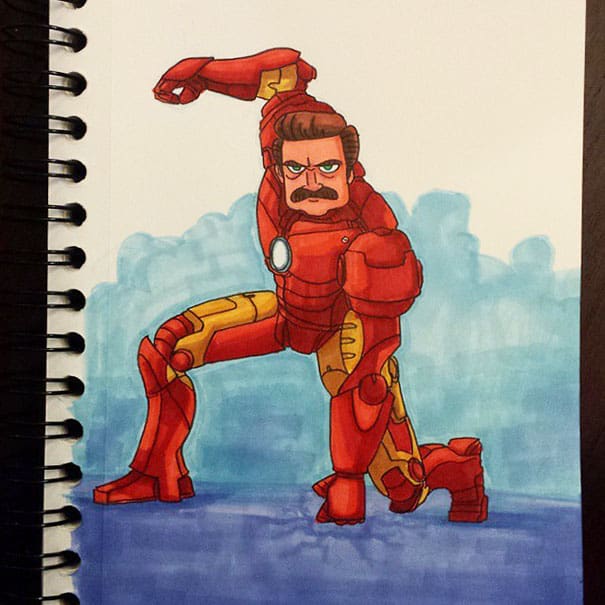 “A disgruntled government employee builds a robo suit in his garage to help him stop the government he works for from getting any more work done.” He…he just looks so right in that suit.

The Princess And The Fro 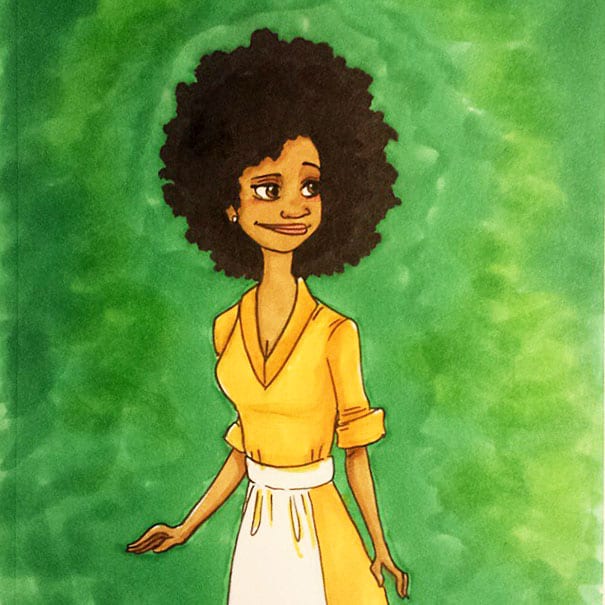 “A waitress goes natural and rocks a fro. Later she becomes a princess for some reason.” There is something magical about afros. We can’t help but feel they would be great places to stash hidden treasures.