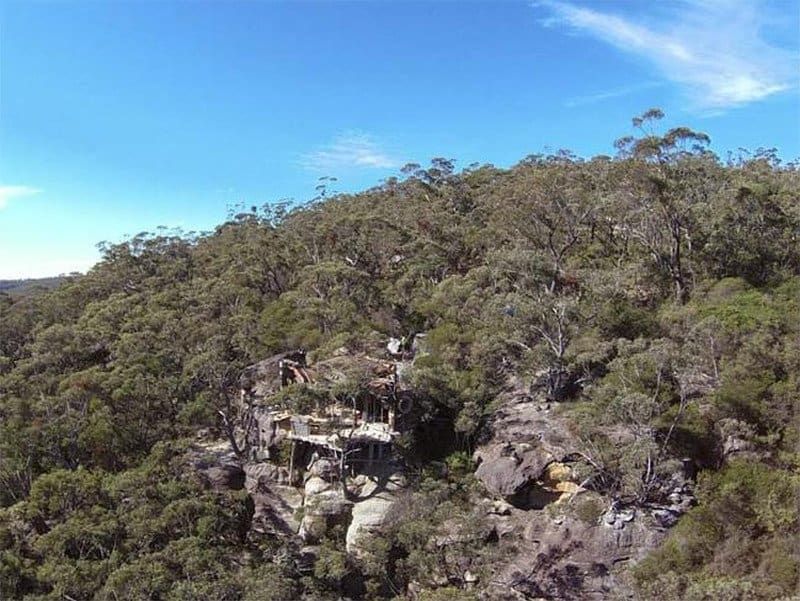 Lionel Buckett and his family have owned large portions of land in the Australian Blue Mountains for over 60 years. Saying “I’ve got lots of connections with this beautiful place“, Buckett decided to build a home on a segment of his 600 acres, but not interfere with the natural beauty of the area. He opted for a completely sustainable cave that blends into its environment. This cave also has a remarkable view of the beautiful bushland surrounding it.

The interior of the cave is carved from sandstone and ironstone, with carved seats and steps. The main construction of the cave is steel and concrete, featuring a kitchen made out of sandstone, and a bathroom complete with shower, toilet, and carved sink.

The cave has a round wooden door, but also has glass doors in the event of inclement weather. Buckett enjoys being one with nature preferring to keep the doors open, saying “You can see the clouds, hear the water. I sit there and feel as though I’ve gone a million years back in time. It hasn’t changed in ten million, and it was an active volcano 20 million years ago. There’s been no human interference. It’s easy to be inspired when you look at that.”

Buckett and his company Australian Hardwood Homes, are considered pioneers in sustainable building as they were practicing those techniques many years before other builders. Through his company and personal endeavors, Buckett has been able to bring many of his incredible dreams to fruition, including completely eco-friendly homes, treehouses, and his cave in the Blue Mountains.

Energy efficiency is at the forefront of all his plans, and he’s been able to successfully incorporate such eco-friendly features such as special copper pipes that collect waste heat and solar power.

Buckett also has added in little details to reflect the rich Aboriginal culture. He commissioned fine carvings from one of his stonemason friends to accent the roof of the cave. Buckett is not opposed to sharing his cave creation with the public, but says “I might change it. Depending on my experiences, how the sun sets, how the winds change.”

Filmmaker Jamie Andrei has made a short film on Buckett and his masterful creation which will be featured next month at TEDxSydney 2015.