20 Children’s Books Which Should Have Never Been Published

Growing up, we all had a book that we loved that seemed just a little too weird once we got a little bit older. Maybe it was because our younger brother or sister were reading the book, or maybe it’s because our own kids started reading it and we noticed an odd story twist. The twist might have been in an illustration, or a particular page that just made you do a double take and make sure you saw or read what you thought you read or saw. Today, we bring you the best of the best of those kid children’s books that should have never been published

Dick Is The Dog. Just So We’re Clear 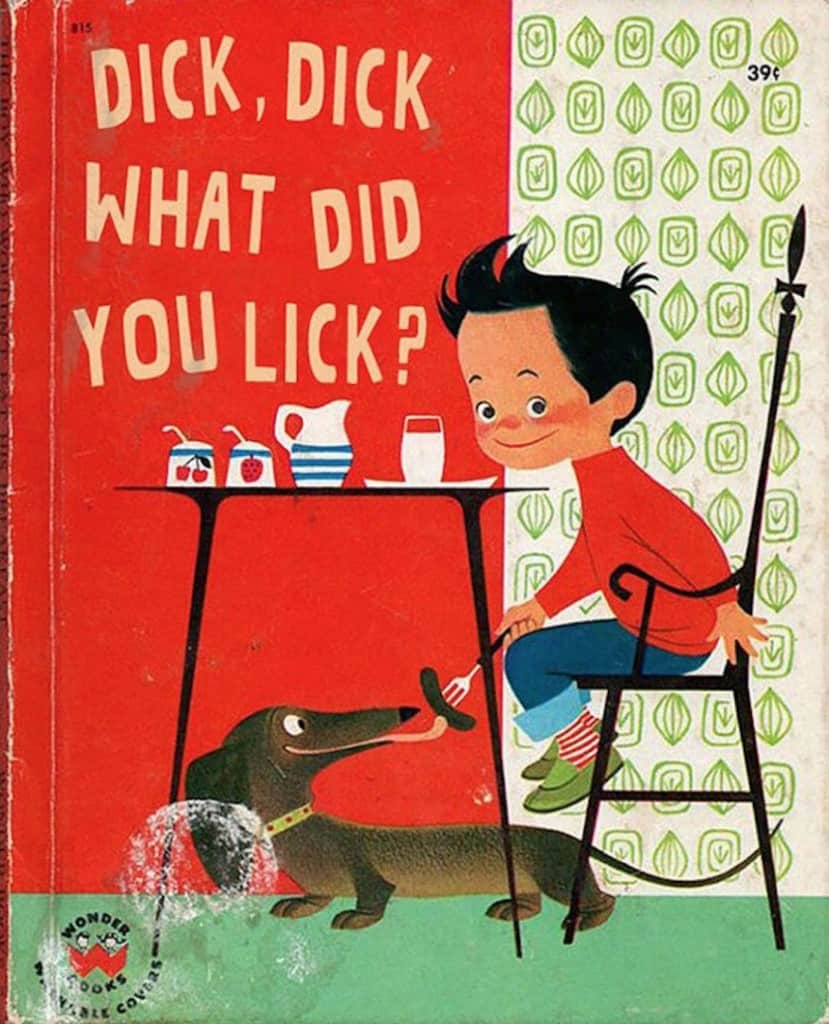 So many double entendres in this particular picture. We’re just thanking the powers that be that you can clearly see the little boy is holding the hot dog and it’s at knee level.

Thank God The Kid Isn’t The One Grimacing 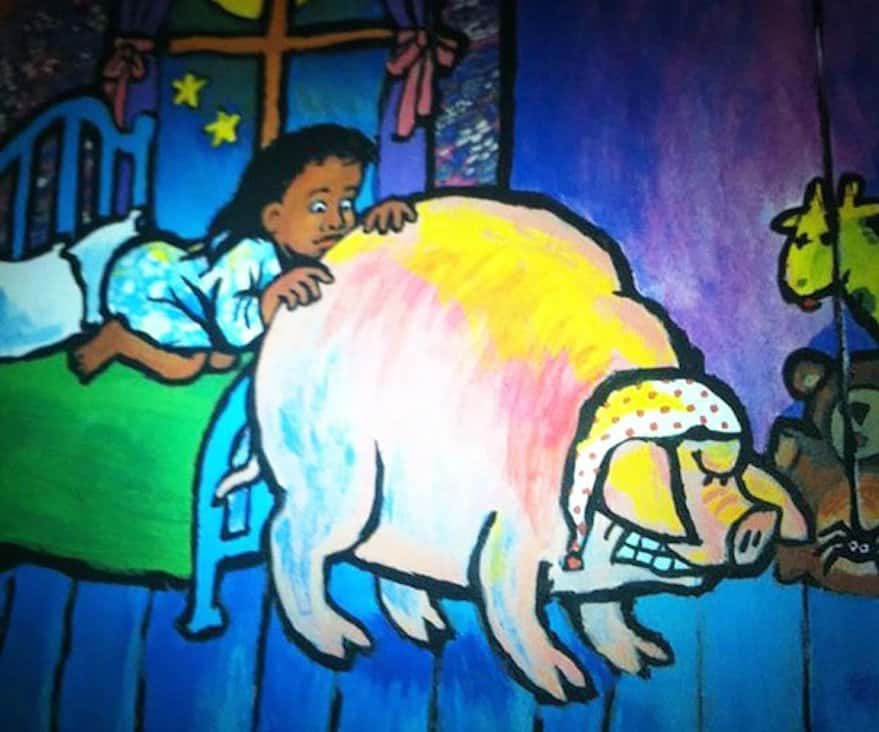 Yes, the fact that the kid is getting a bit close to the bum is troubling. The fact that the pig is grimacing is even more troubling. But picture this, what if the kid had the pig’s expression on her face? The picture becomes one that is quite a bit more disturbing than it already is. 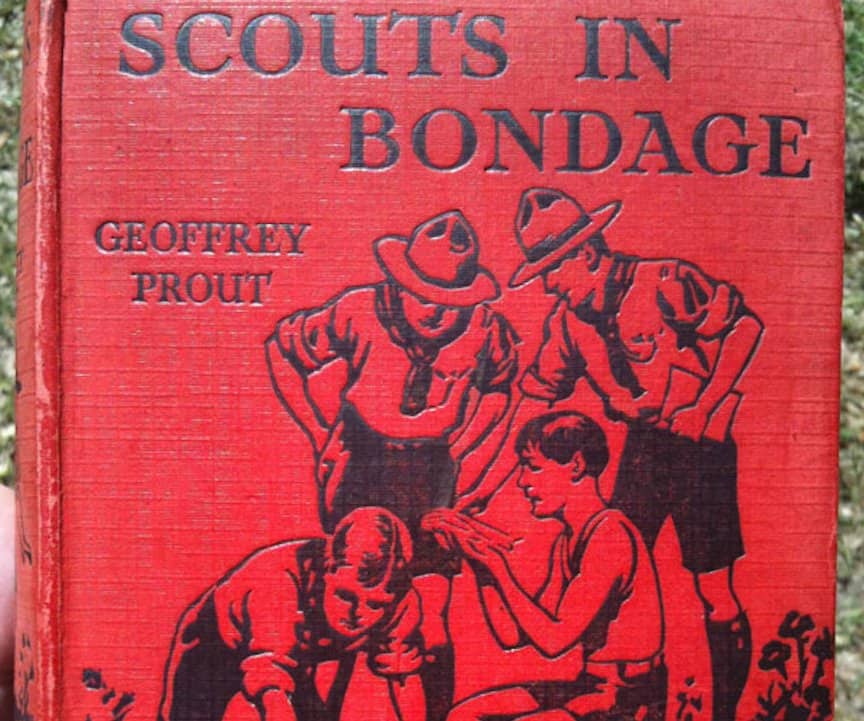 Yes, we know the kind of bondage they are talking about. That doesn’t mean the author of the book should have completely ignored the connotations that such a title would have.

And Then, The Police Were Called 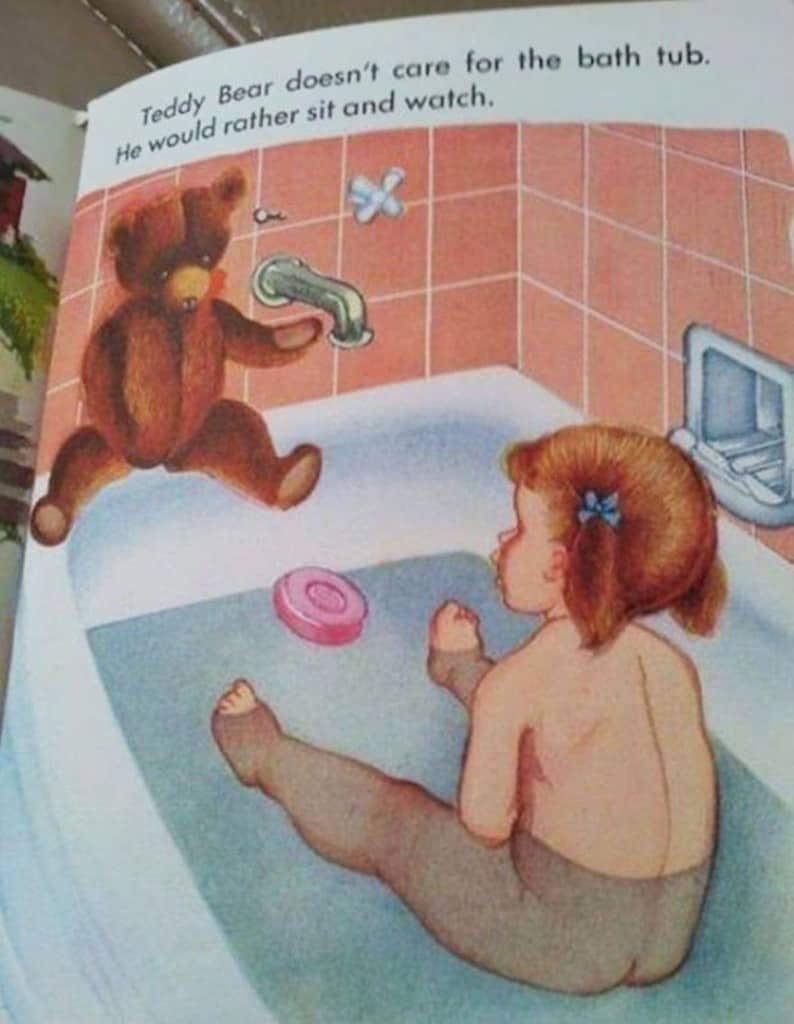 The only thing creepier about the bear watching a little girl in the bathtub is where the bear has rested his hand while he watches the girl take a bath. This might be the creepiest picture in a kid’s book in the history of creepy pictures.

Is The Titular Character In Front Or Behind The Policeman? 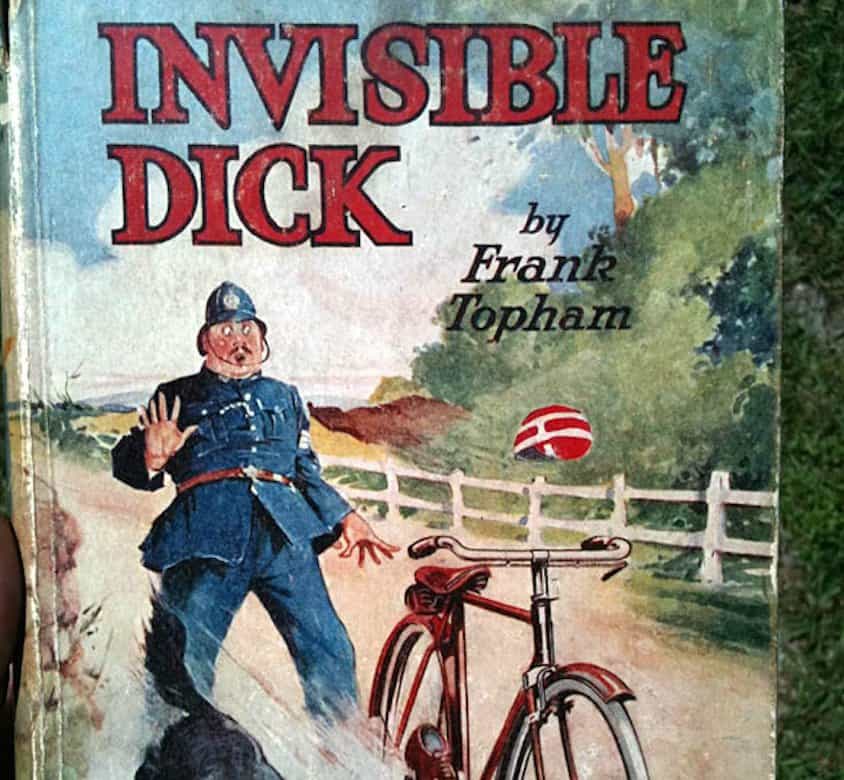 The best part of stories like this is just how completely and totally lacking in self-awareness the authors were in a certain era. There’s simply no way a book like this would be written in 2015.

It Was Candy Right? Or Cake or Something? 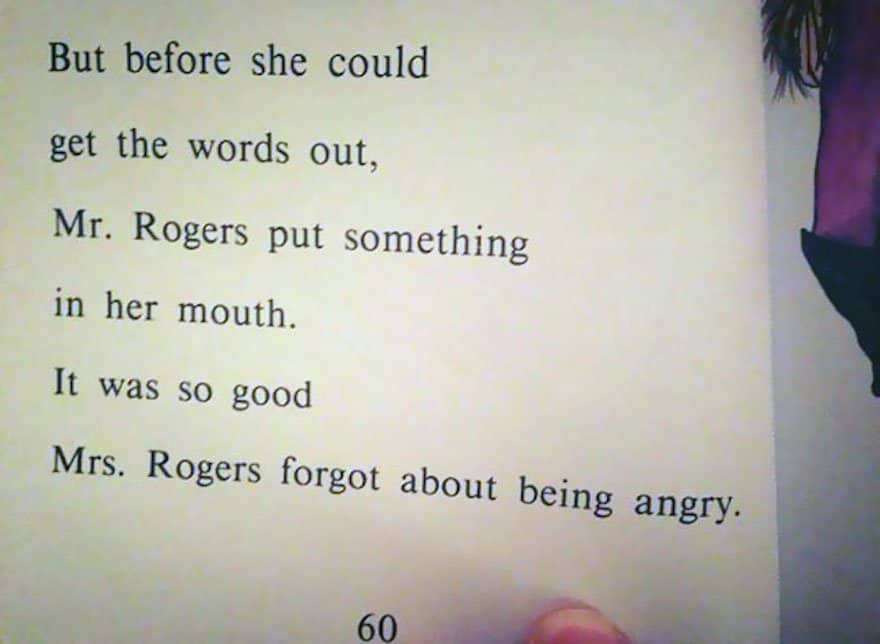 The only way this particular turn in the story gets awkward is if you have a pretty perverted mind. Everyone who read this thought the same exact thing though, didn’t they? Let’s hope the kids the story is aimed at didn’t make the connection. 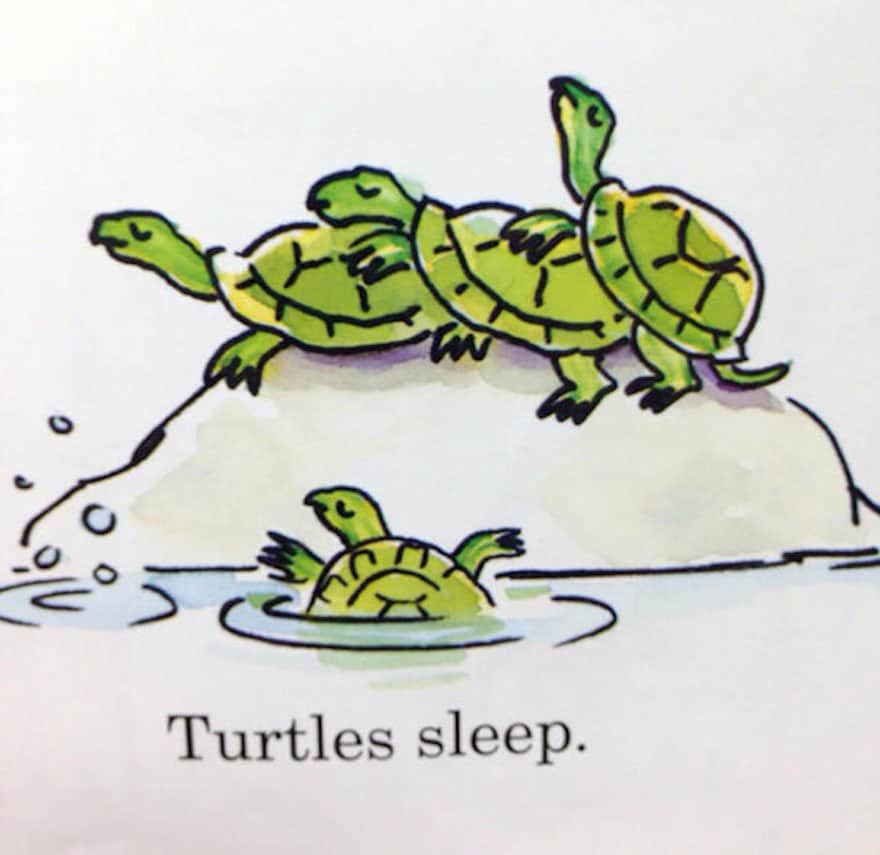 Turtles sleep, that is rather obvious. What is a bit surprising is the way turtles sleep. We both want to and don’t want to sleep like this. 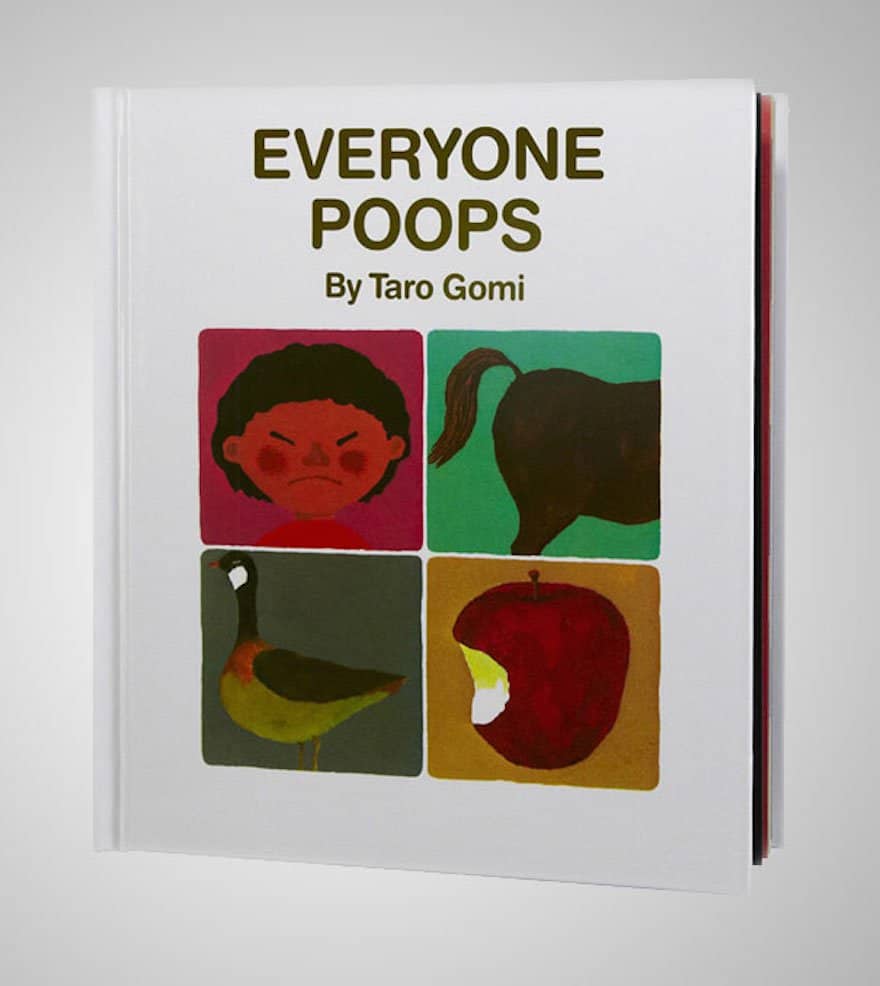 Look, we get this message is one that can be embraced in a number of cultures. Still, we’re not sure we needed an actual picture of a horse’s behind to explain where the poop comes from. Also, fruit doesn’t poop. 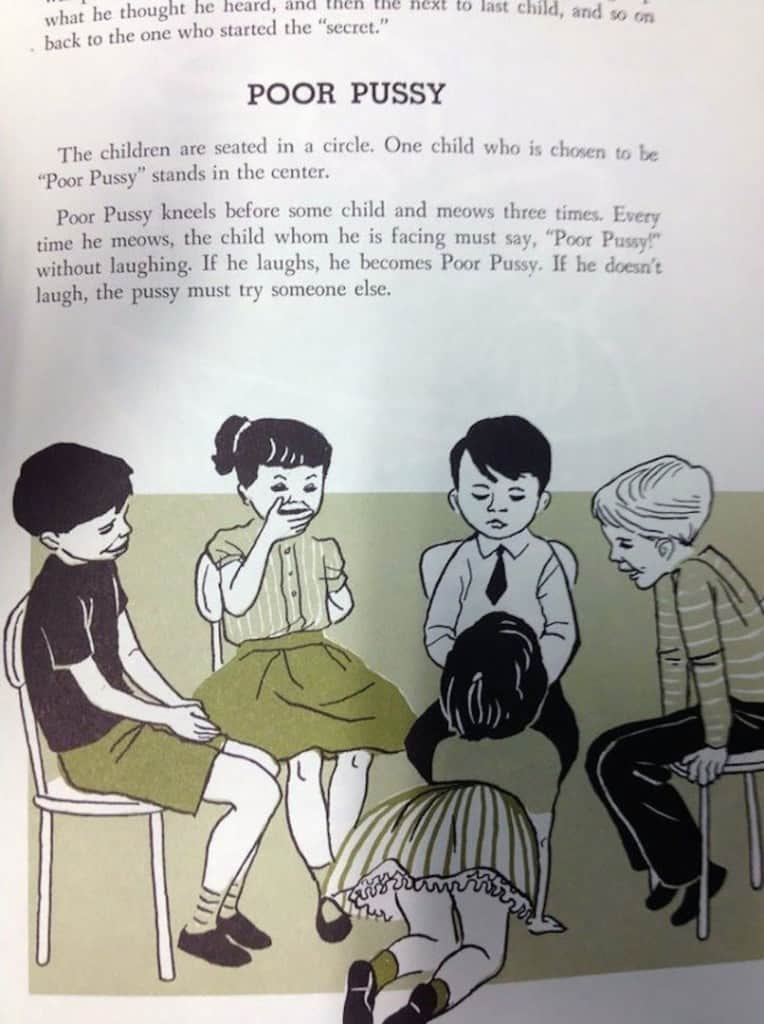 Judging by the illustration in this particular book, its a safe bet that it might have been written before the word had the same kind of meaning it does now. Or the author simply didn’t stop to think about the rules of the game before they put them on paper. 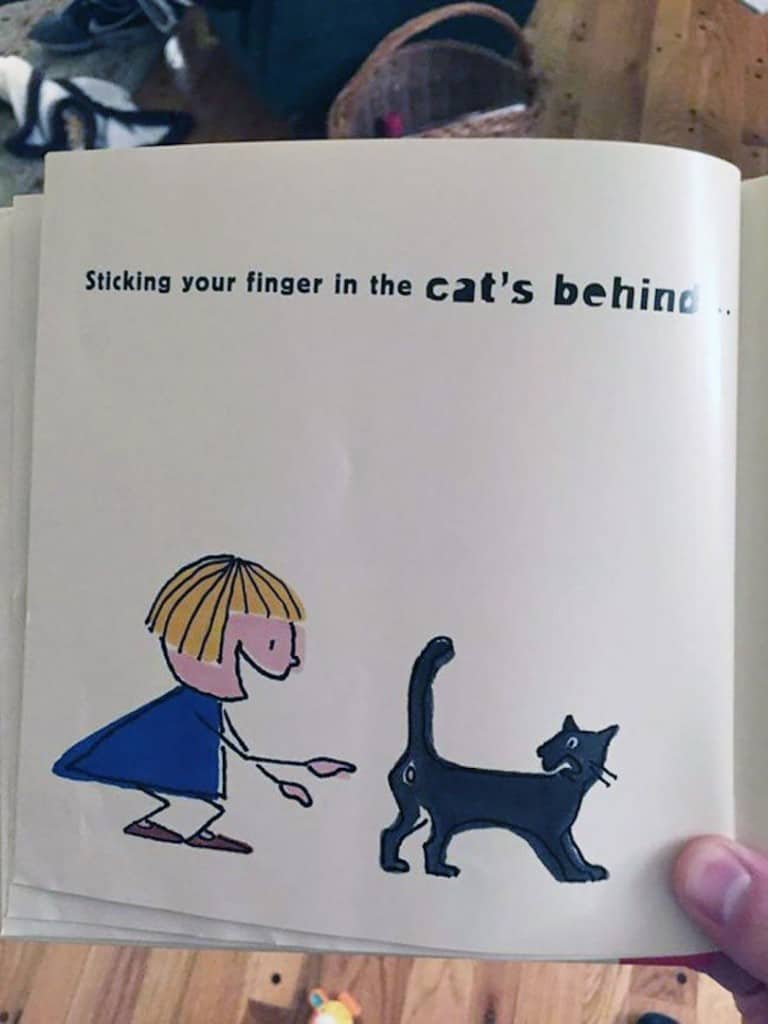 We’re at a loss to explain what’s going on in this book. I mean, the picture is talking about a girl putting her finger in the cat’s butt. What exactly was the point of this particular story anyway? 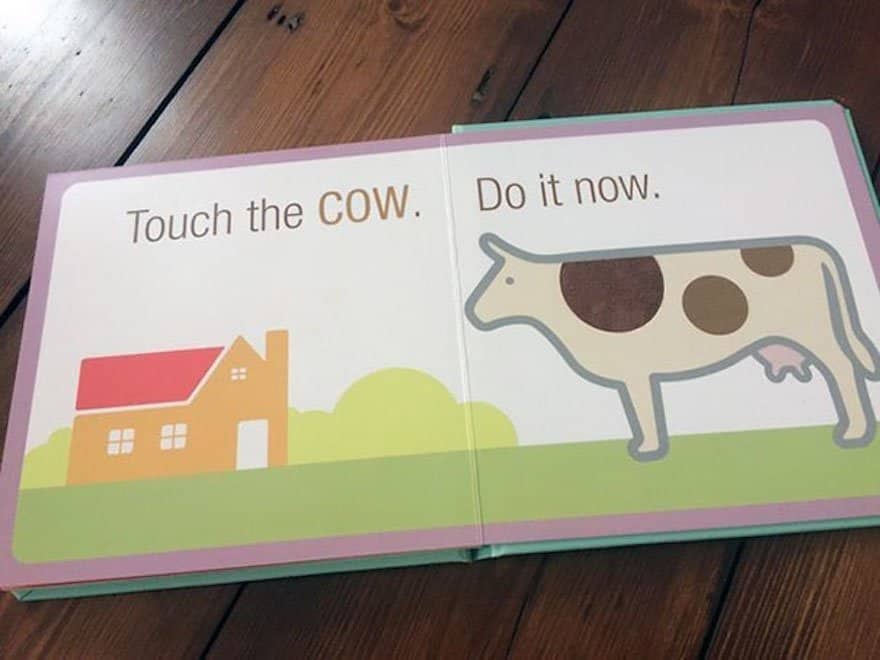 Some kids books are succinct and to the point. This particular book seems to be more demanding than other’s we’ve seen. The fact that it’s demanding to touch something just makes us uncomfortable.

Your Elephant Is Leaking 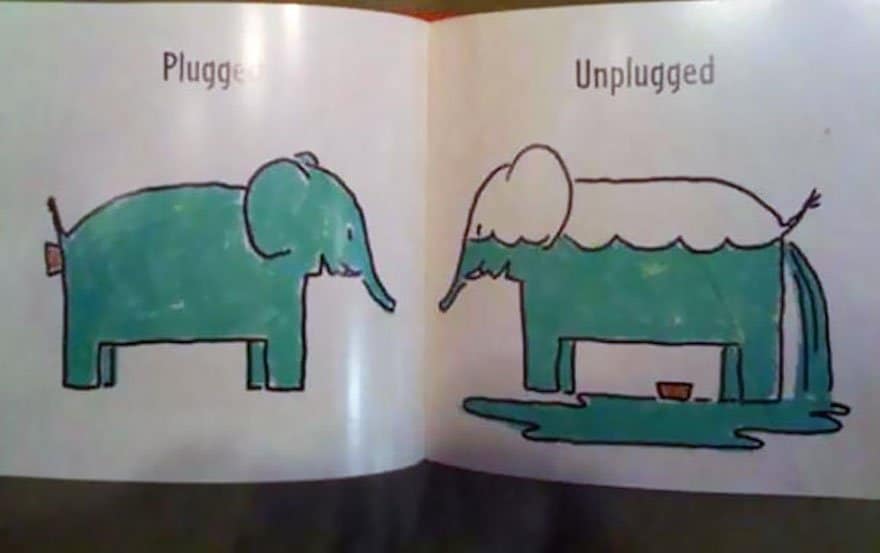 There are no words. What in the world is the Elephant doing with a cork in its rear end? Why in the world was that holding in a bunch of water? Why is the elephant still smiling?

Now Explain How One Page Goes With The Other 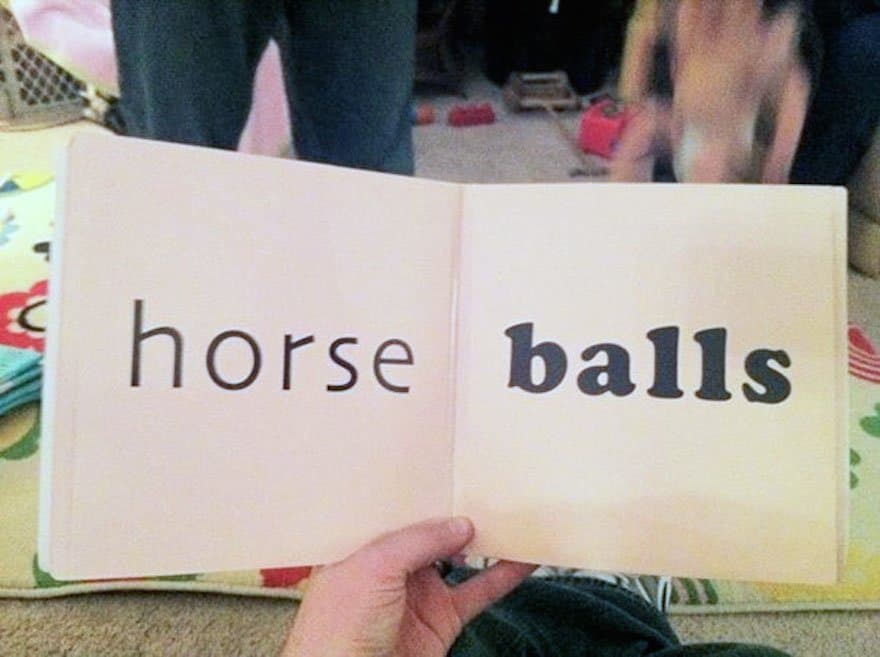 It’s pretty obvious the author didn’t mean for these pages to be together for the reasons we all expect. The problem is we can’t think of what else the meaning could be. 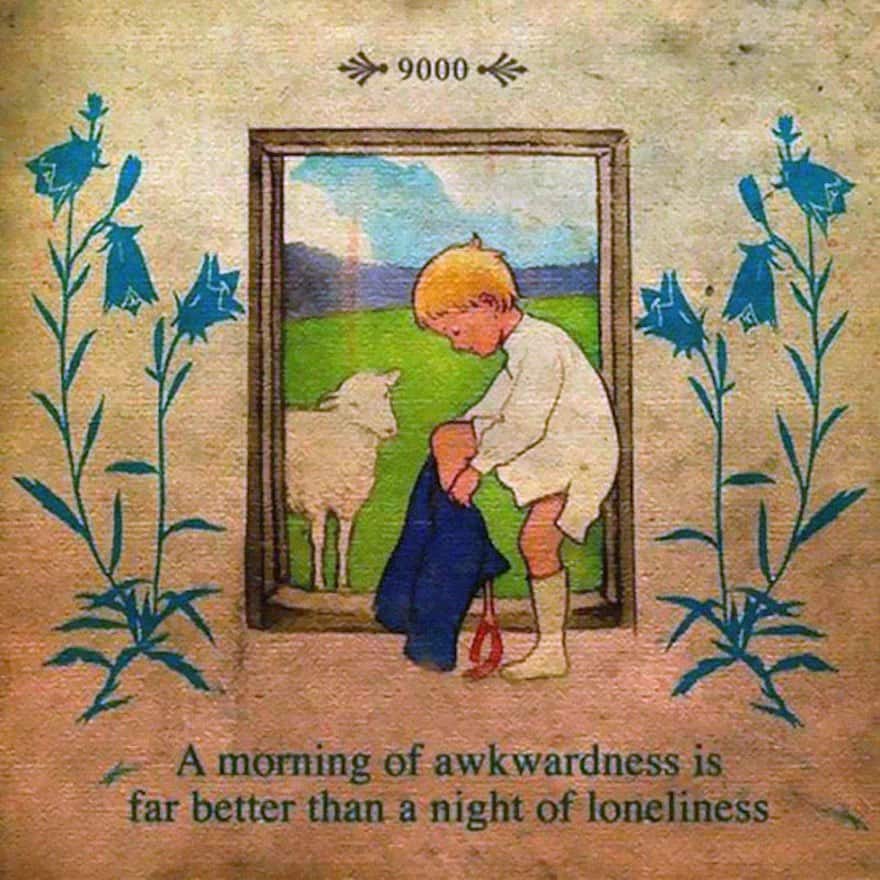 We get what message the author was trying to get across with his message. We’re not sure the author understood the message that actually got across.

And Then The Mental Hospital Was Called 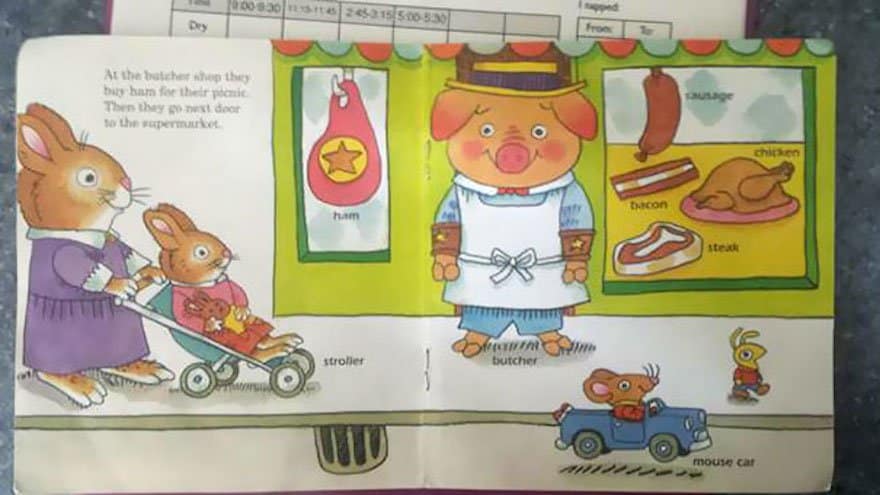 While kids may not get the connection between the pig being a butcher, and the butcher selling sausages and bacon, we sure do. Let’s just hope this doesn’t scar the children for life after they realize.

You Never Knew Pinochio Was This Bad 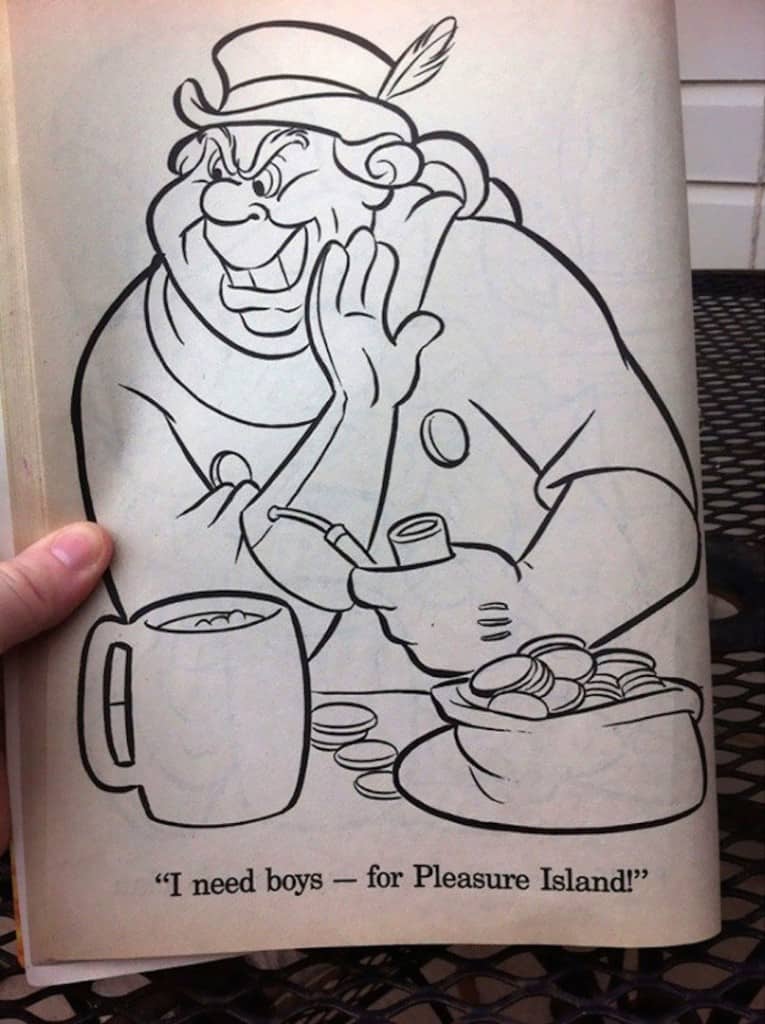 When you’re reading the bottom line, you get to “I need boys” and your mind starts to wonder what for, and then you read the last bit… let’s just hope the children don’t look for additional meaning in the statement. 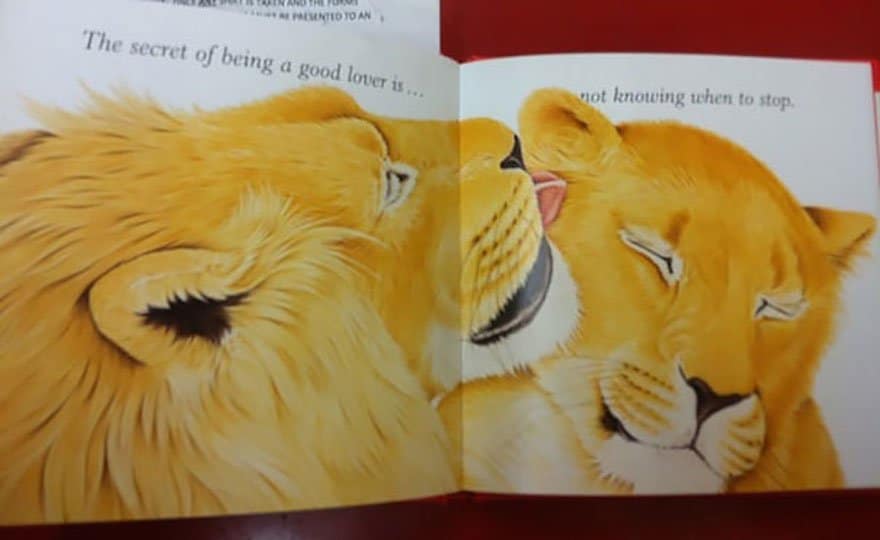 You had no idea that there was a kid’s book out there that taught lions how to be this kind of predator. The other lion looking unhappy certainly doesn’t help the story.

Which One Is Harpo? 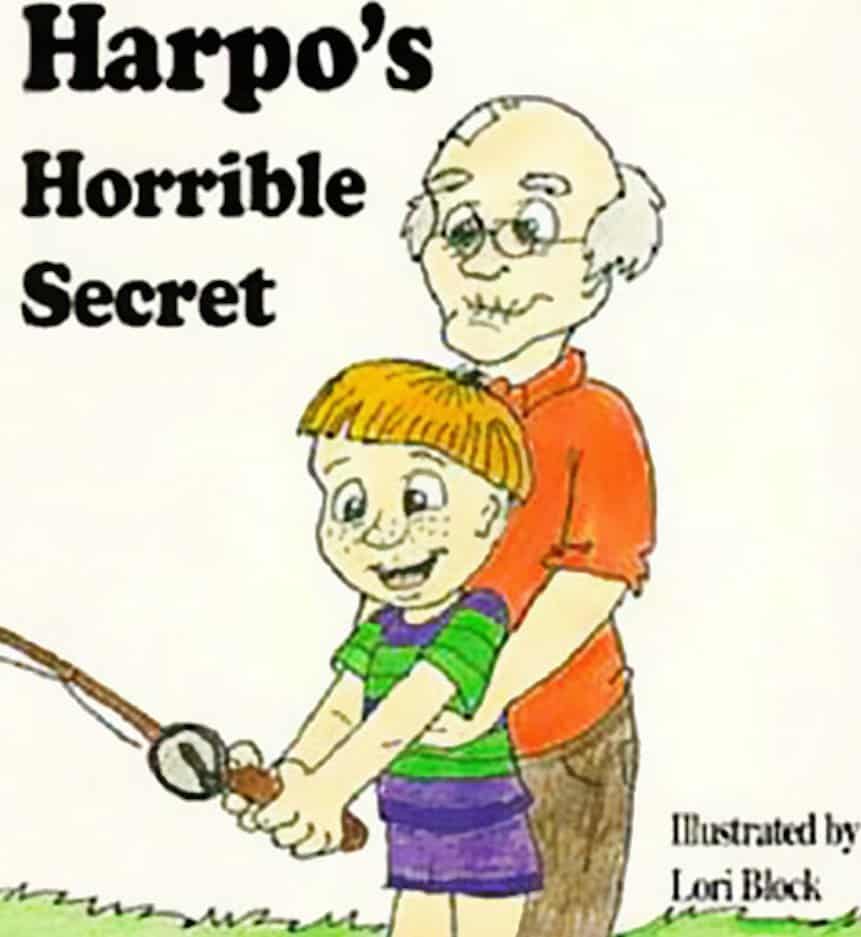 This particular picture is horrifying for a number of reasons. Just one of those reasons is we do not yet know who Harpo is and if part of his horrible secret was born in this picture. 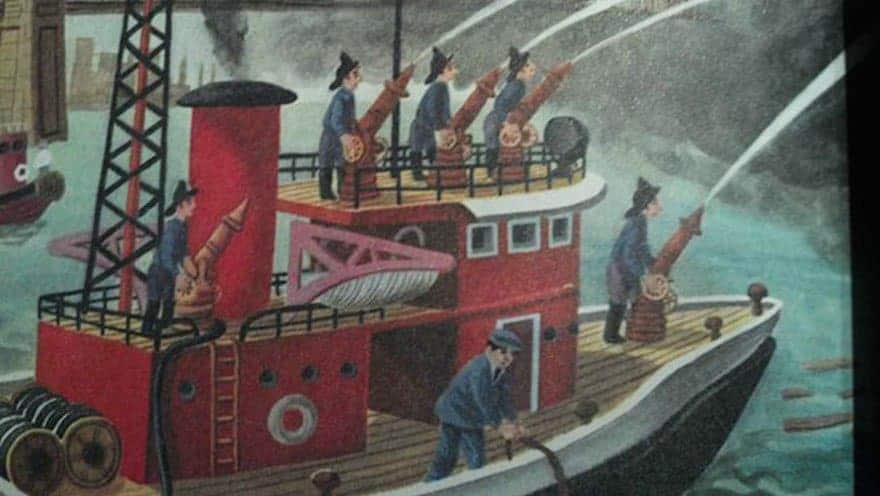 This picture embodies everything that happens when you don’t have any self awareness with your drawings. Kids are going to look at this and see firefighters. Adults see something… else. 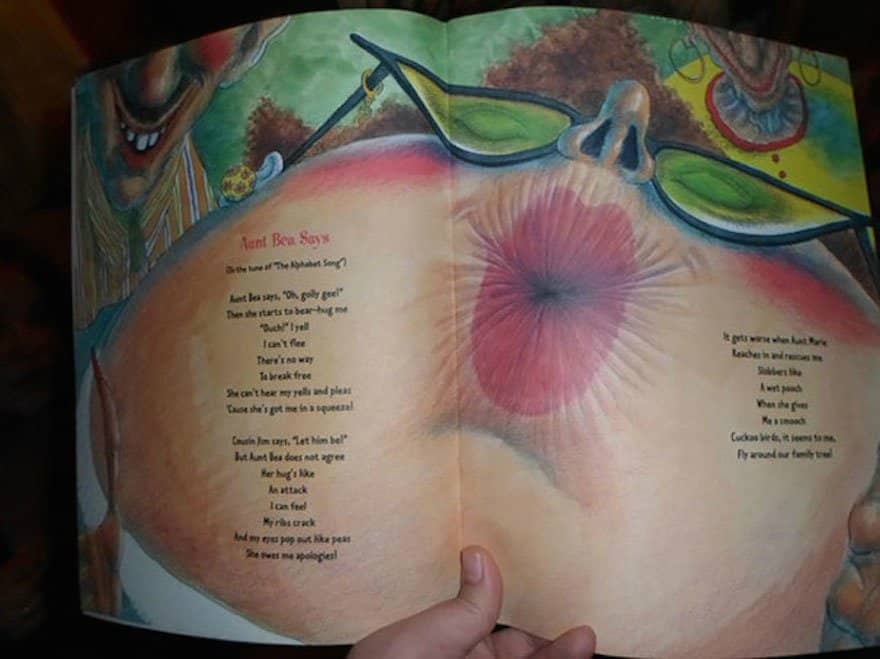 We’ve all had elderly relatives who wanted a kiss rather badly but we didn’t really want to give them one. This particular aun’ts face makes it rather obvious why the character in the story doesn’t want to comply.