We all have our definitions of what’s weird and funny, but artists of all stripes seem to take funny and weird to a whole new plane of existence. Some express it in paintings, some in sculpture and some in pen and ink. Some become incredibly famous, some don’t. Either way, their job is to leave us, as the old song goes, “bewitched, bothered and bewildered,” or perhaps leave us in tears of laughter. It’s said that much art is a product of people’s imaginations and psyches. Given the strangeness of all these sculptures and paintings, the truth of that statement is self-evident. 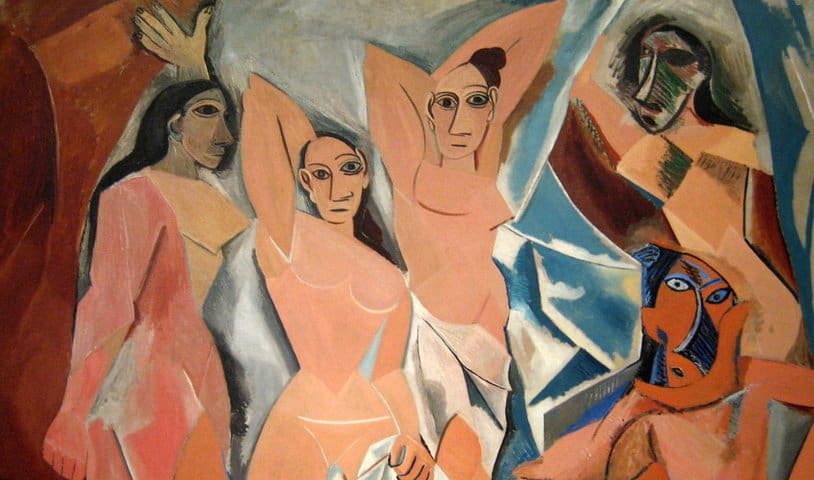 When Picasso released this painting, naturally it caused a fuss with the traditional art world. His French rival, Henri Matisse, decried the women in the painting as “prostitutes.” Interestingly enough, that’s actually what they were. It’s likely Matisse also took issue with Picasso’s style, but was too focused on the fact that the women were nude. 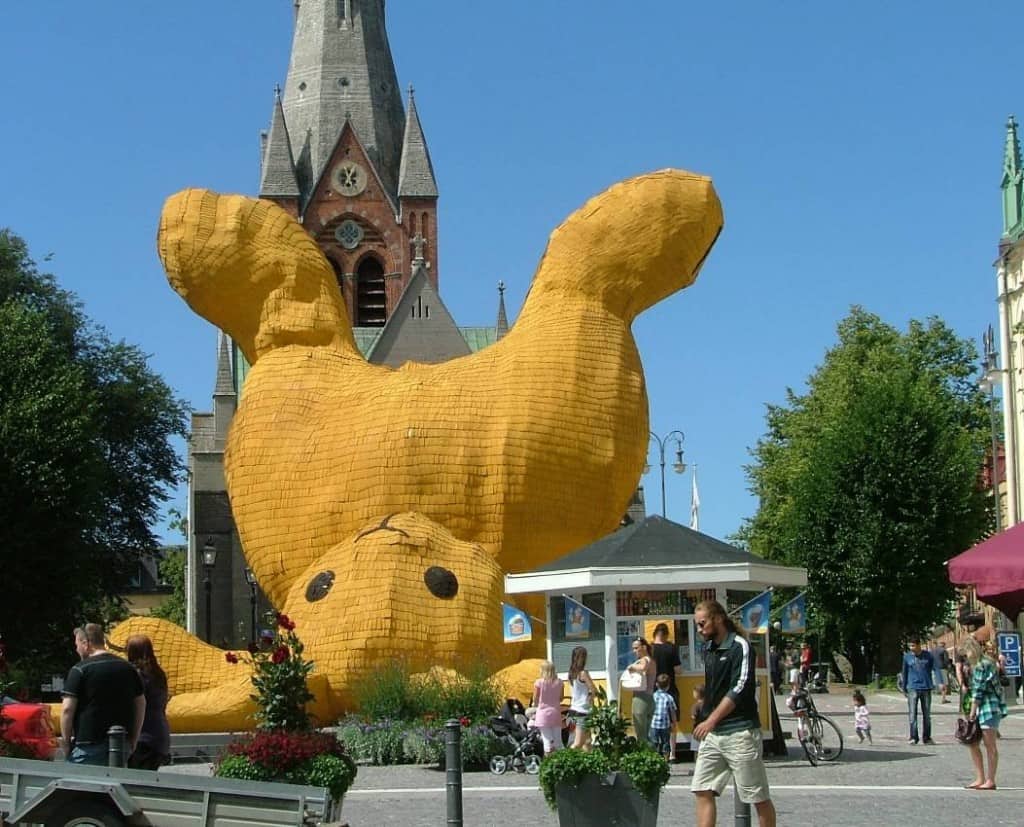 If you want to see a big, cute funny bunny, look no further than Dutch artist Florentijn Hofman’s big yellow rabbit sculpture made with local materials and by local craftsmen. It’s situated near St Nicolai church in Oreboro, Sweden, but it looks like it just dropped out of the sky and landed right there, as if some big entity took aim with a cuddly toy and threw it down just anywhere. 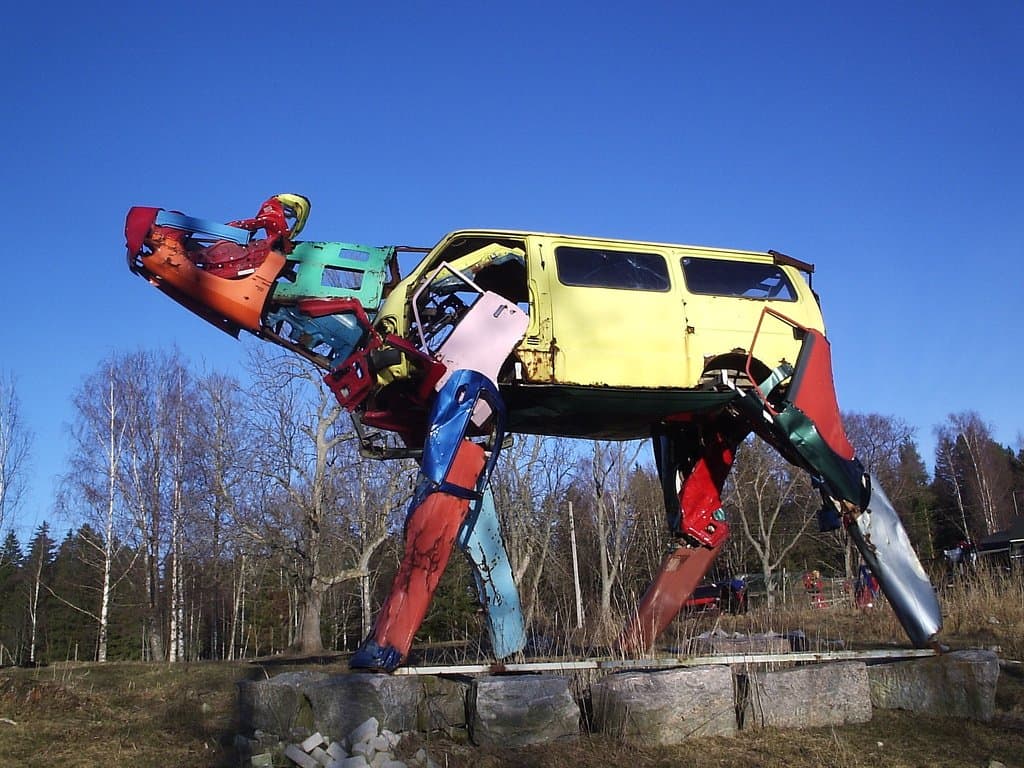 Miina Akkijyrkka’s name may be near-unpronounceable to most, but her cow sculptures out of old car parts speak to the imaginative child in all of us. In fact, many of these sculptures have been compared to the “AT-AT Walkers” from “Star Wars,” concerning their positions and materials. She might have been influenced by that, but her history of working on farms is a closer source of inspiration. 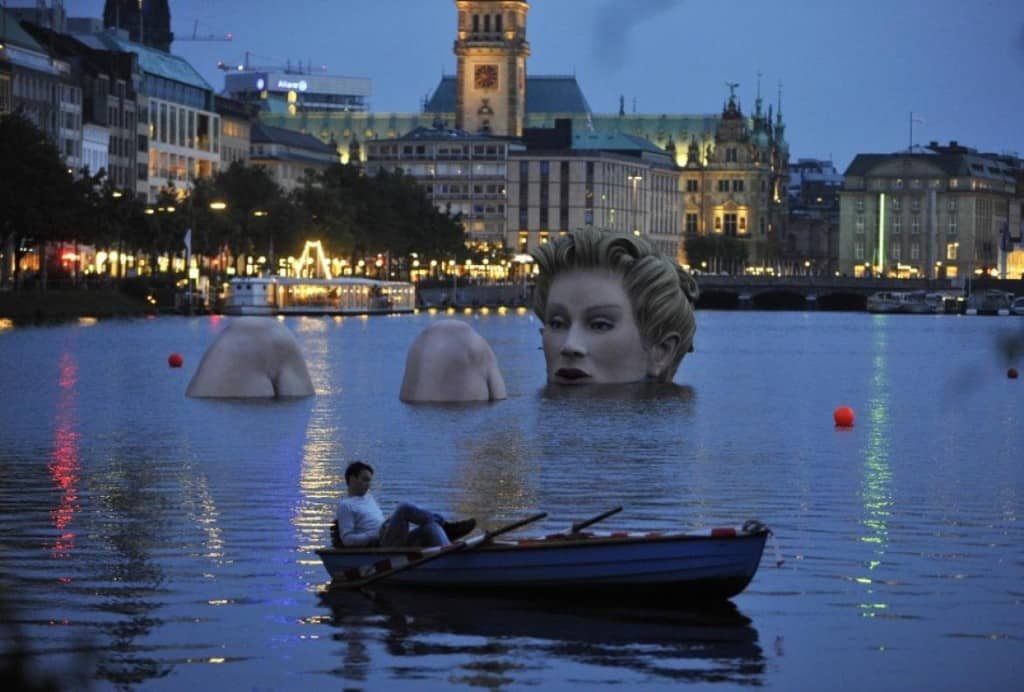 Go to Halster Lake in Hamburg, Germany, and you’ll see something of a strange sight. In that great big lake, there is a sculpture called “Riesen-Nixe,” or “Bathing Beauty,” or also “Bathing Mermaid.” This was created by artist Oliver Voss in 2011, and you’d be hard-pressed to find something this big, or this strange in your friendly neighborhood lake.

“The Persistence of Memory” aka ‘The Melting Clocks’ by Salvador Dali 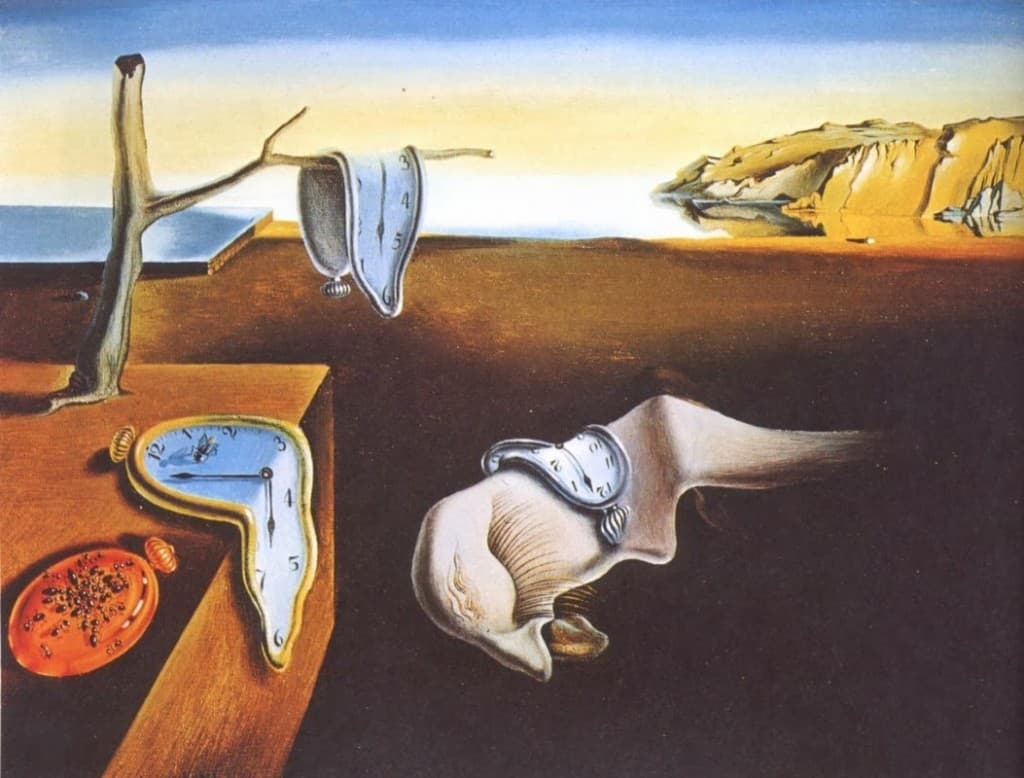 Of all of Salvador Dali’s works, this is probably the most remembered, and perhaps the most re-captioned. Why? Because of its obvious strangeness. This is surrealist painting at its best, and strangest, and there’s even been an actual clock modeled after this famous painting. 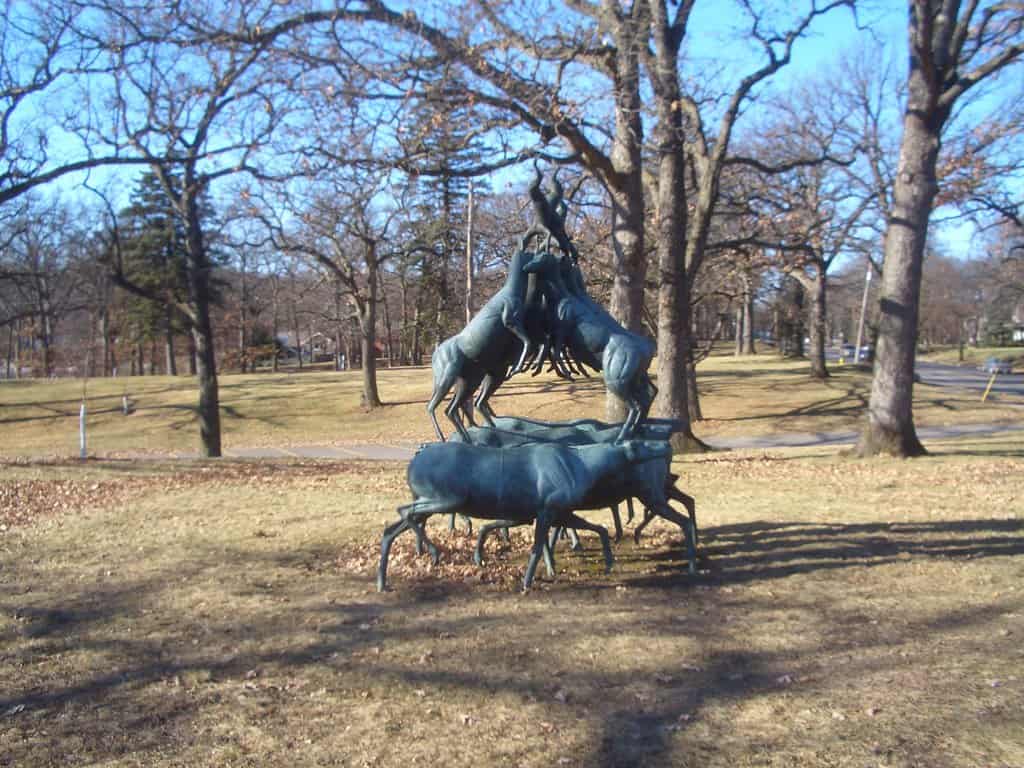 When it comes to art, most people think of “American Gothic” when they think of Iowa. They don’t try to venture over to the Des Moines Art Center where there is this crazy, enigmatic deer sculpture that depicts deer standing on top of other deer, whose heads you don’t even see because the artist sculpted the bodies together. Definitely strange — for Iowa! 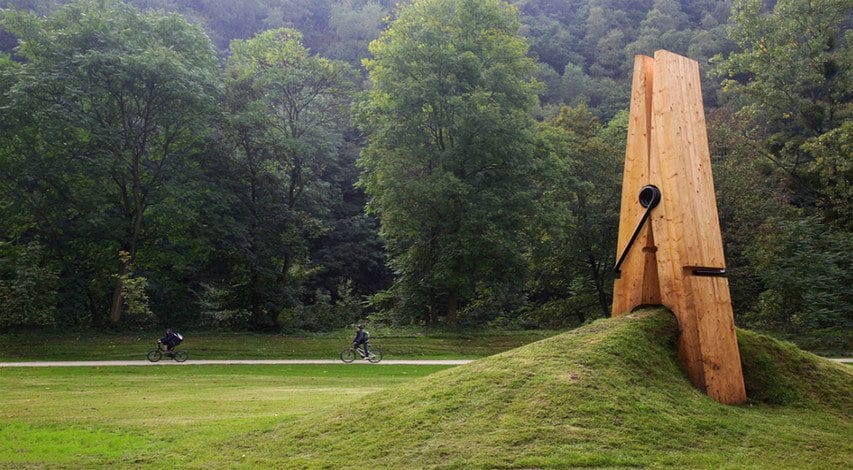 This is one of the best eye-fooling sculpture tricks ever—and it’s in Chaudfontaine (Show-fohn-tan) Park, in Liege, Belgium. It was created for the Five Seasons Festival by Turkish artist Mehmet Ali Uysal. Many people wonder what artists are trying to say with their works, but maybe Mehmet was simply reminding people to keep both their laundry and their lawns clean.

“The Elephants” by Salvador Dali 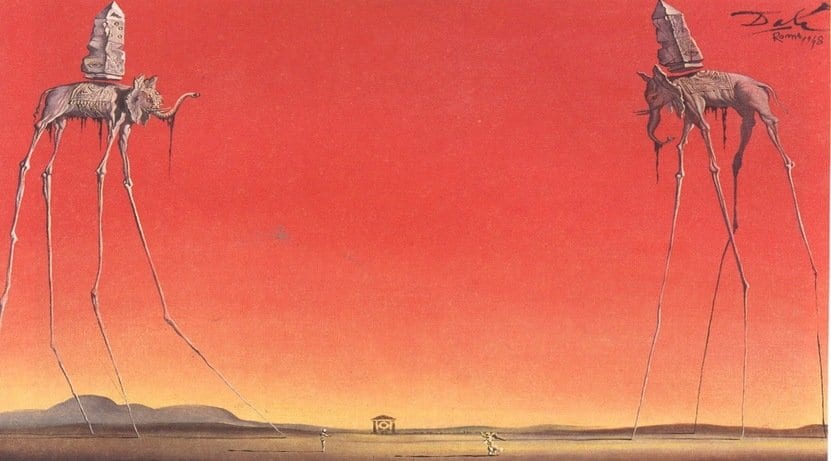 This is another surreal favorite by Salvador Dali, and anyone who’s a “Star Wars” geek is going to immediately think, as with the Finnish artist Miina Akkijyrkka, that these elephants make them think of the “AT-AT Walkers.” Regardless of what you personally think of, you really do wonder what good stuff Dali was on when he painted. 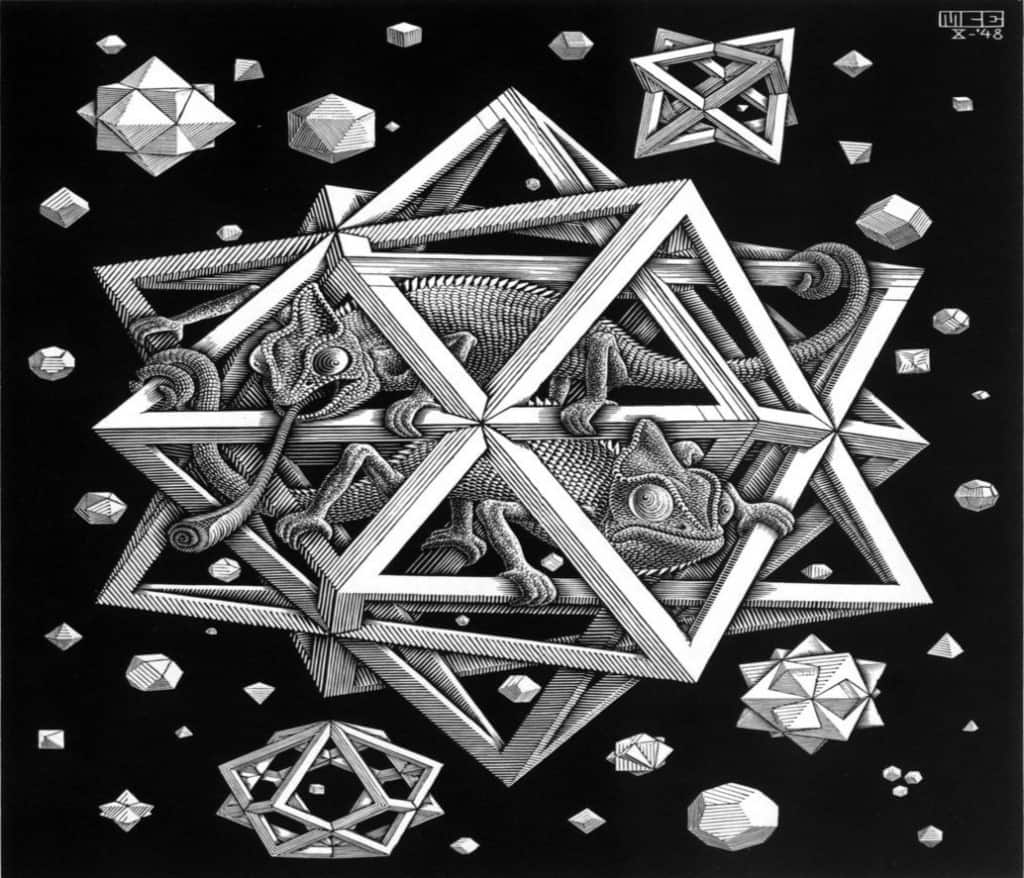 Escher is one of those artists you study in high school when learning to get a sense of mathematical proportion, so you think, “Ah, Escher isn’t that strange.” Think again, because in this one drawing, he has chameleons — of all things — in a crazy geometric star. And no one knows how Escher planned to get those poor chameleons out of the jam he drew them in.

“The Anatomy Lesson of Mr. Bird” by Hillary White 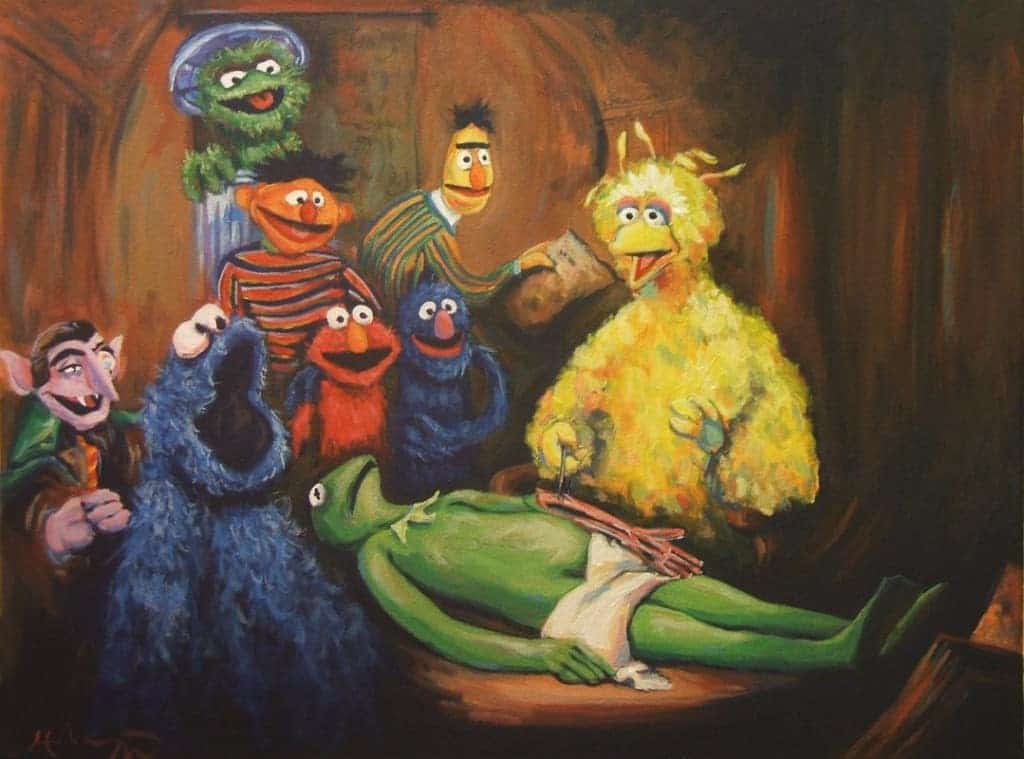 Many artists, especially artists with a love of pop culture, will take a well-known painting and give it a modern twist with beloved pop culture characters. Hillary White is one of those artists, and here, she’s using the “Sesame Street” characters to depict Rembrandt’s “The Anatomy Lesson of Dr. Nicolaes Tulp.” Who says kids’ characters can’t be into high art?

“The Garden of Muppetly Delights” by Hillary White 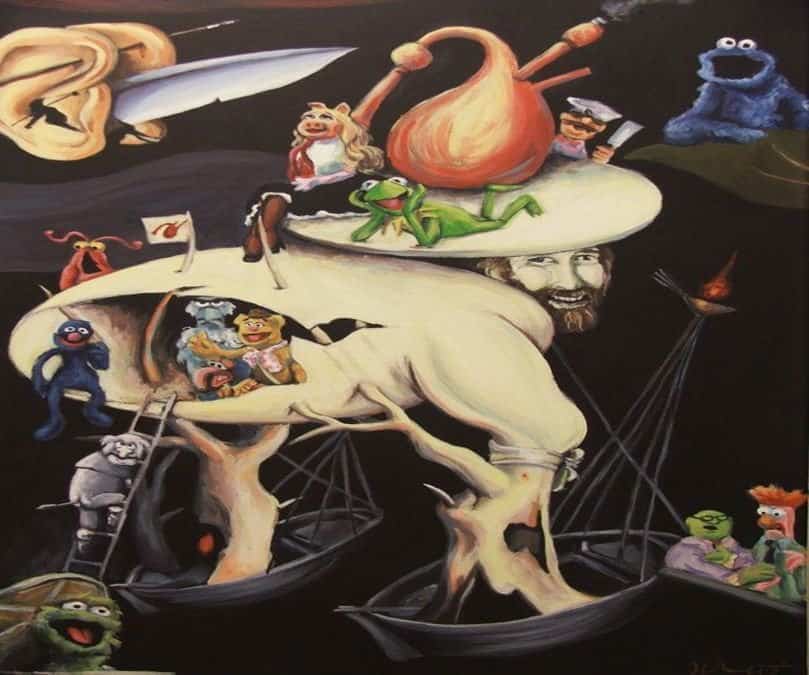 This is another of Ms. White’s comic creations, spoofing Hieronymus Bosch’s “Garden of Earthly Delights.” In all truth, this is actually quite fitting for the Muppets, as they themselves are delightfully surreal. And Jim Henson had to think in surreal ways for the Muppets to succeed as they have. 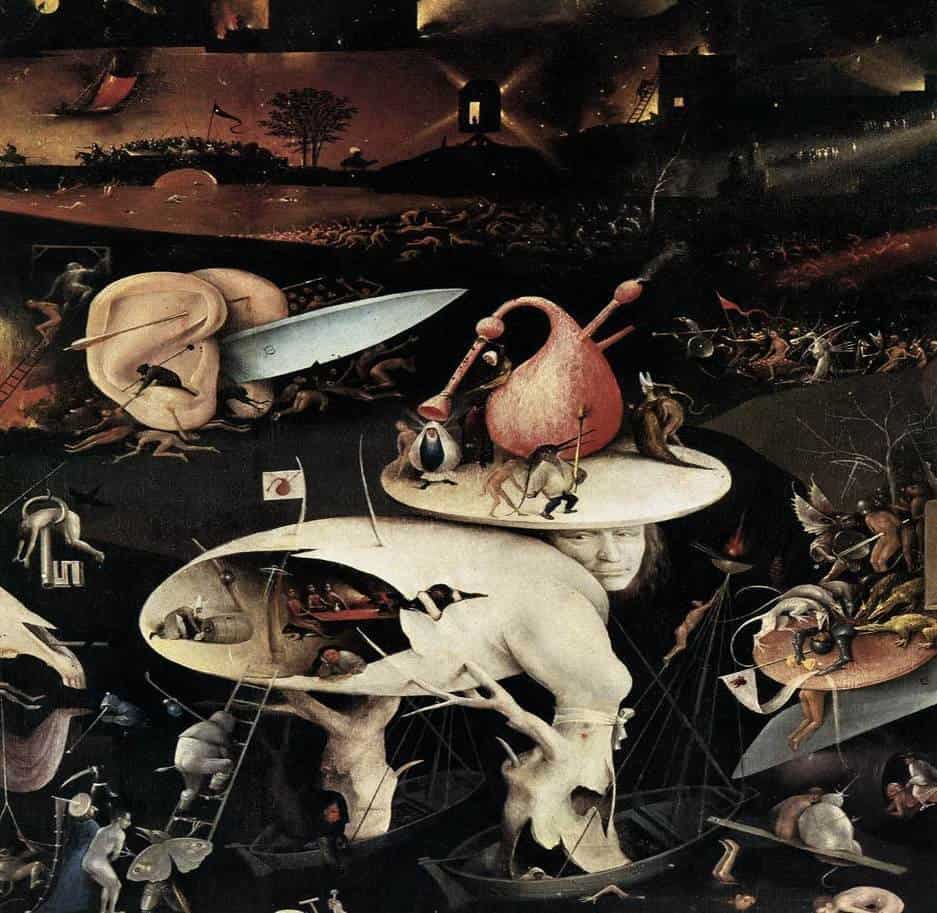 As long as we’re on the path of strange and surreal art, let’s give Bosch himself a round of applause for being such an inspiration to surreal — and comic — artists everywhere. I mean, look at this picture. Like Salvador Dali, you really have to wonder what he was on when this popped into his mind. 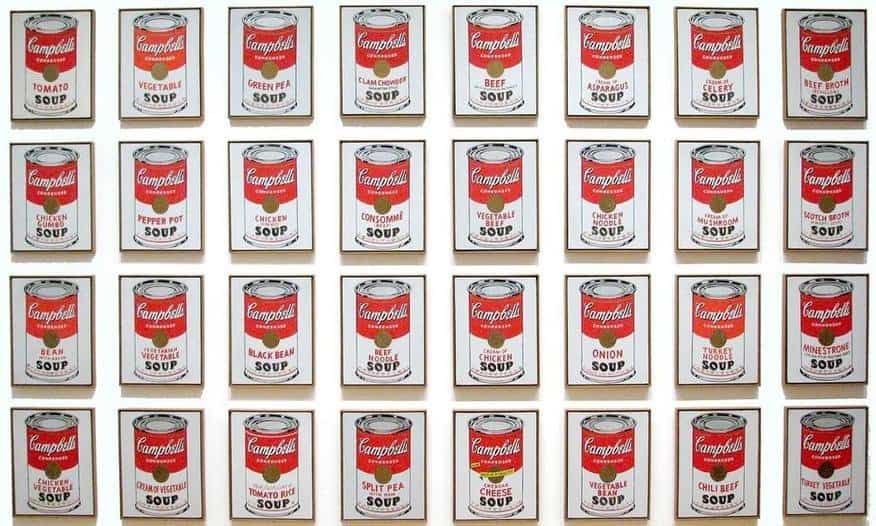 The reason this falls under the category of strange and funny is that Warhol himself had to be even the tiniest bit eccentric to imagine soup labels as art. After all, he probably figured there were enough “ducks-and-dogs” paintings out there, so he likely decided to elevate the soup label to modern-art icon status. It’s one of those pieces that really makes you think, “What was this all about?” and “That’s far less boring than other things I’ve seen.” 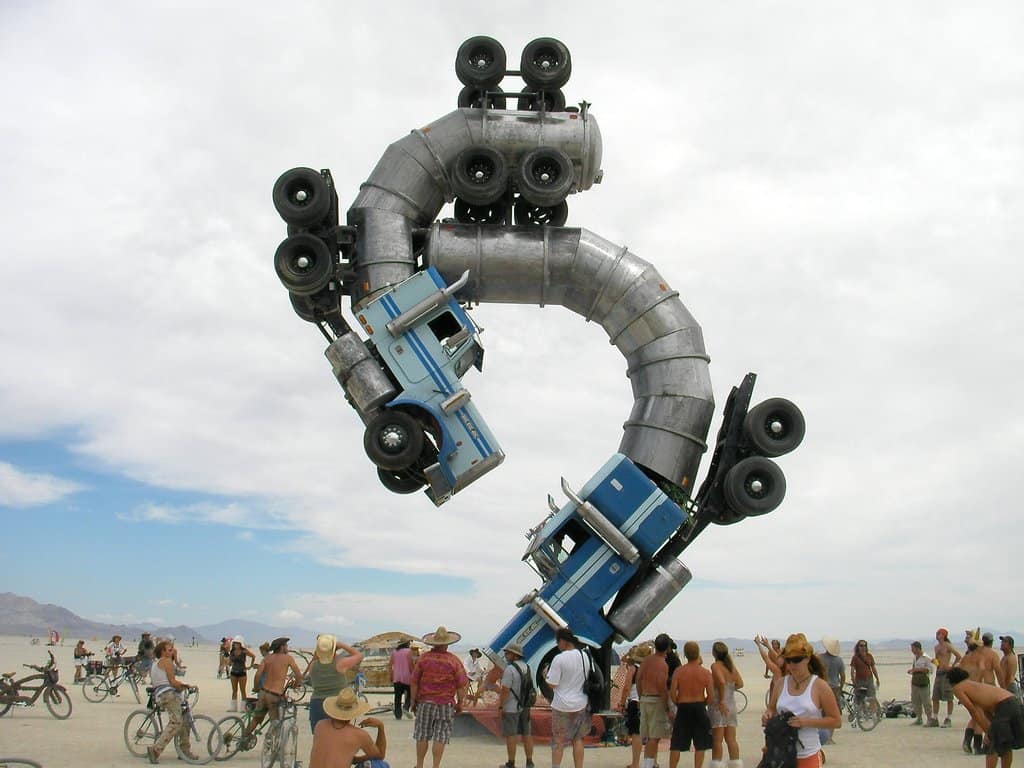 This piece of weirdness is a sculpture of semi trucks put together in a jigsaw-puzzle-piece-type pattern. Naturally, it was deemed weird enough to debut at the 2010 Burning Man Festival, one of the ultimate “Weird Art” events you could ever attend — so weird it often makes Japanese anime look somewhat normal. 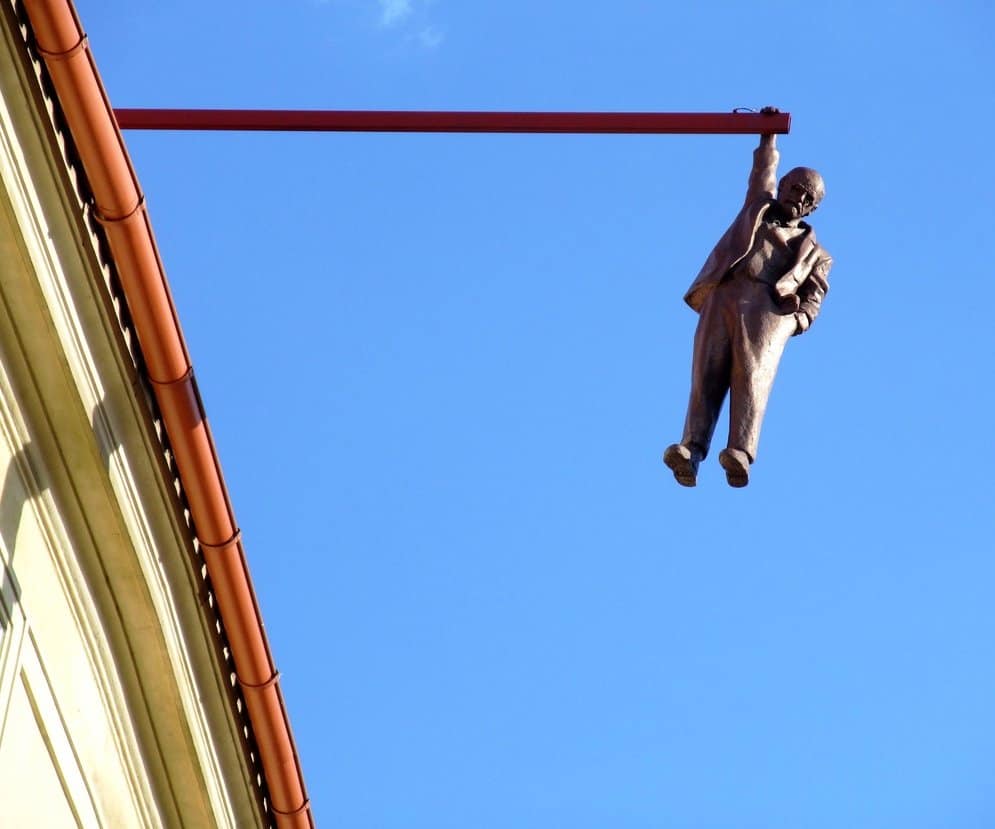 It is said that the so-called “model” for this odd sculpture in Wroclaw, Poland was Sigmund Freud. Whether it was or it wasn’t, it’s definitely a head-scratcher, and it’s a case where the art supersedes how well-known its maker is.

“The Magic Tap” by Artist Unknown 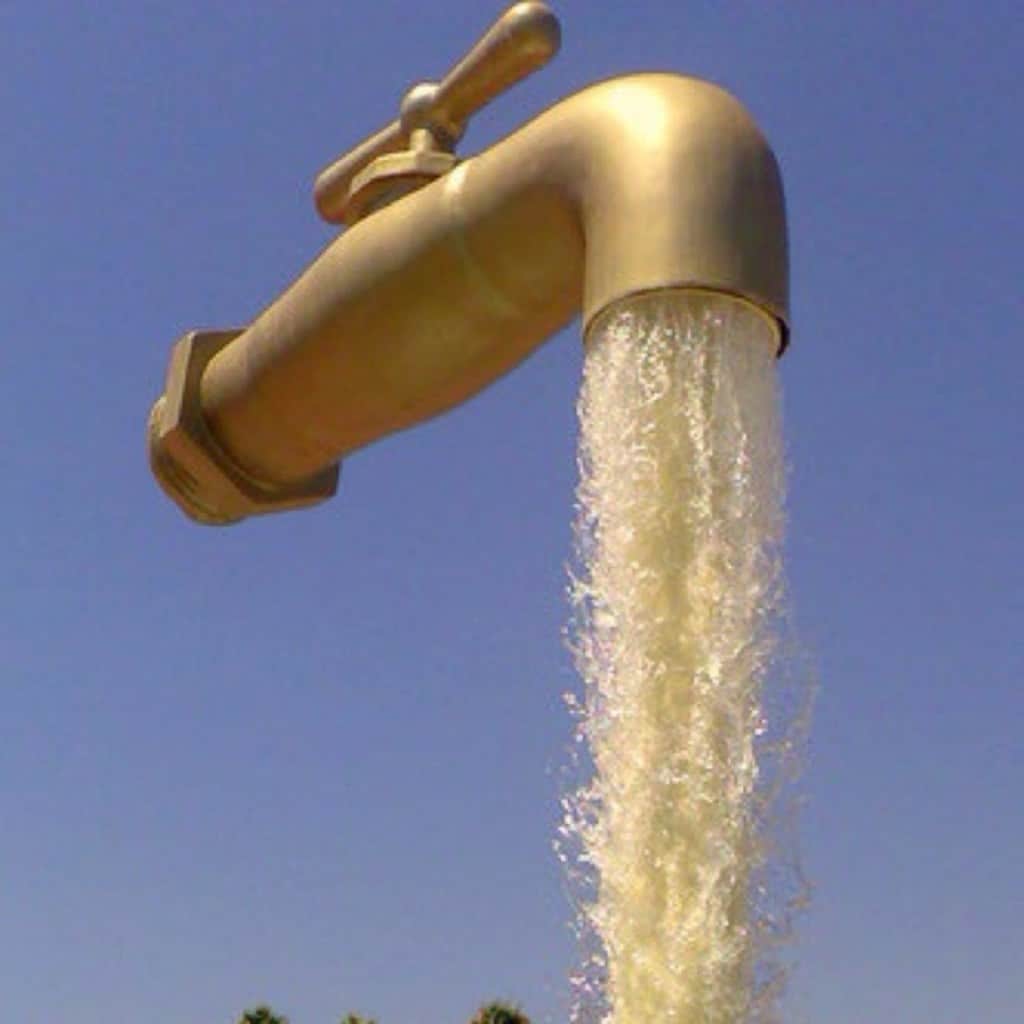 Here’s another sculpture — one of mind-boggling illusion — where the art supersedes its maker. It’s in Cadiz, Spain, and yes, that’s real water coming out of that sculpted tap. How it’s done is many people’s guess, but on a hot Spanish day, that has to be one of the most refreshing-looking sculptures to stand around. Our guess is a large pipe hidden behind the water.

“Spoonbridge and Cherry” by Claes Oldenburg 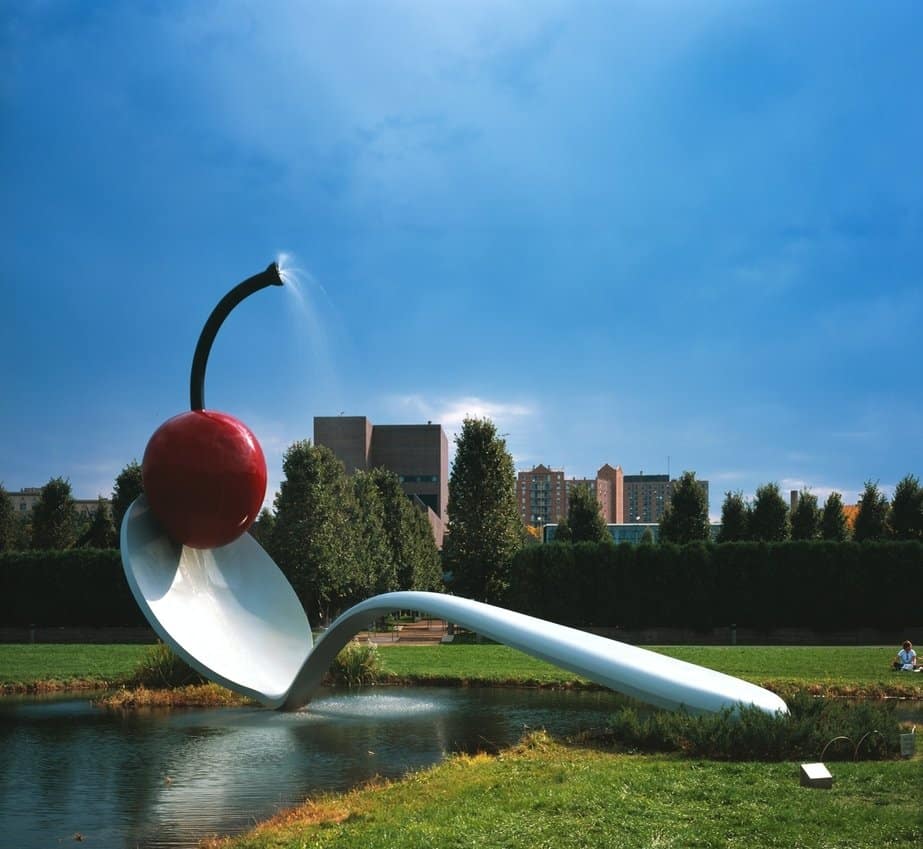 Back we go to the Midwestern US, this time to Minneapolis, Minnesota. They have a rather well-known sculpture park there, and one of the most famous sculptures there is something called the “Spoonbridge and Cherry,” built by Claes Oldenburg back in 1988. It’s positioned over a lake in the park, and the cherry stem acts as a fountain. Fun, huh?

“A Friend In Need” aka ‘Dogs Playing Poker’ by Cassius Coolidge 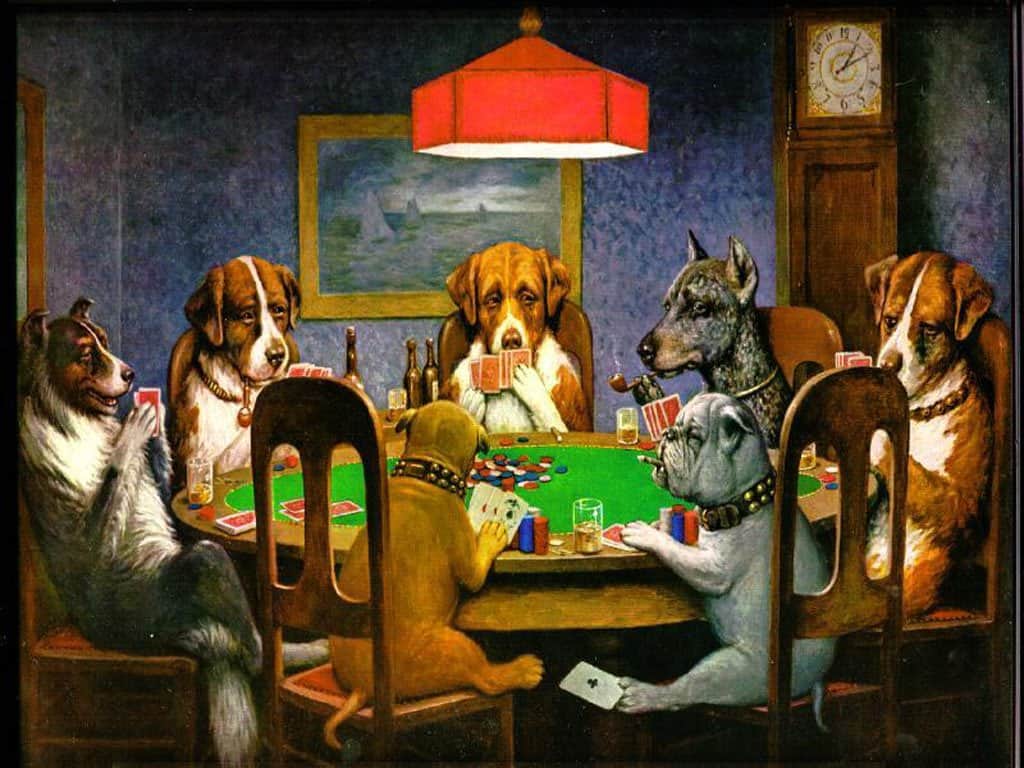 This classic painting is just about as well-known as anything by Warhol or Dali, yet this famous image is one of those that really superseded the artist. Everyone knows the “Dogs Playing Poker” image, but true art aficionados know that Cassius Coolidge, or “Cash” to his friends, is the one who brought this iconic laughter-riot to life.

“The Dream” by Pablo Picasso 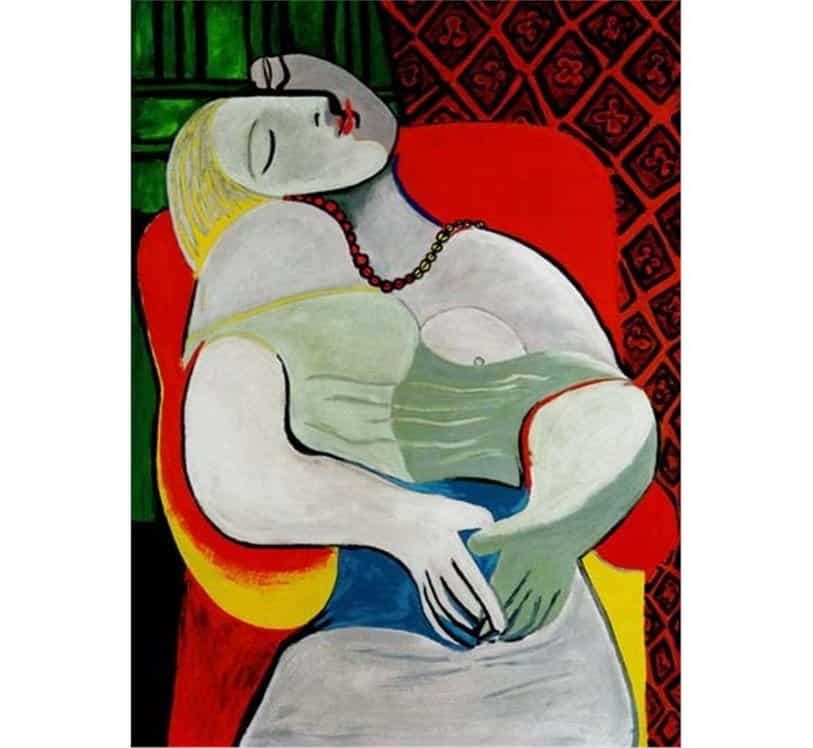 Everyone’s experienced weird dreams, and given the position of the lady’s neck in this famous Picasso painting, you might think Picasso’s identifying with all those who’ve had their head at that near-perfectly ninety-degree angle and woken up with a horrible neck-ache. Or else he purposefully painted the image in a strange way to reflect just how strange the dream world is. 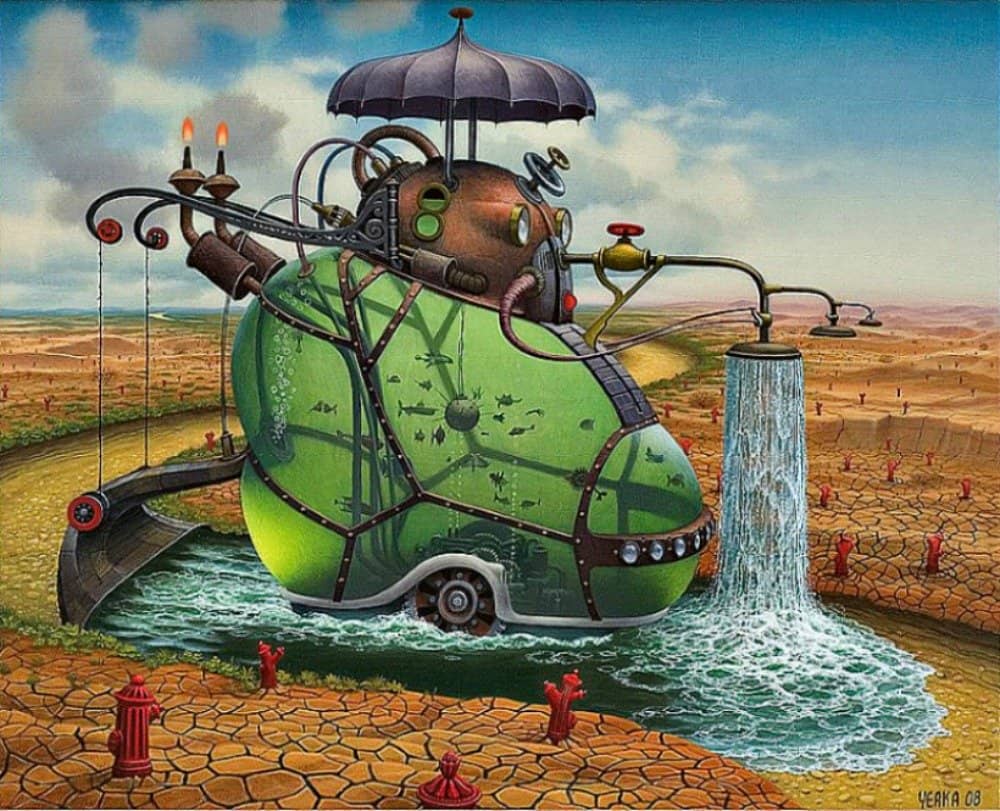 Jacek (YAH-check) Yerka is one of surrealism’s up-and-coming painters, as “Aquarius” is from 2008. He’s not quite as well-known as Dali, yet, but if he keeps painting strange-yet-cool images of cars with other weird stuff happening either to or around the cars, he just might become known as the Man Who Paints Weird Cars, among other epithets.