The prom is a big time in the lives of every high school student. They spend all this money on getting the perfect dress, renting a tuxedo, buying flowers and renting a limo for the date. It is a time for everyone to get dressed up, dance and have a good time. It is also a time when photos are being taken left and right to capture the moment, which is something most of these people are probably regretting now. Check out these prom photo fails that will have you questioning what was going through their mind at that time! 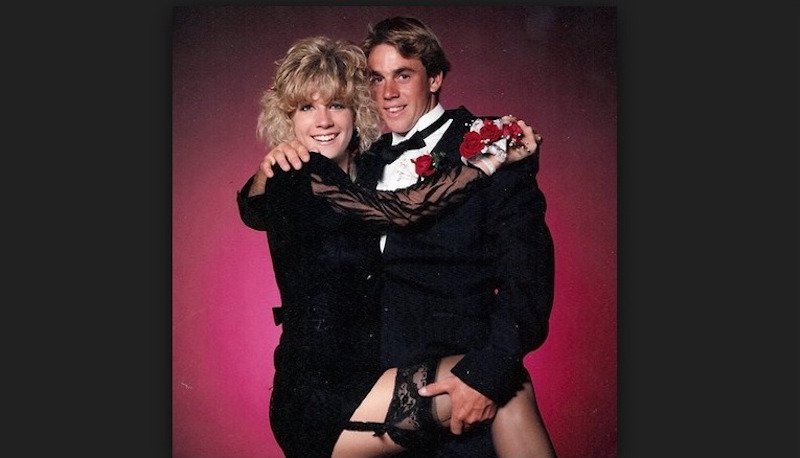 Is it just us or do these students look a little old to be going to the prom? Maybe it is some of the teachers having a little too much fun for the cameras, but we don’t know if a garter belt is appropriate for prom!

Pose On This Rug 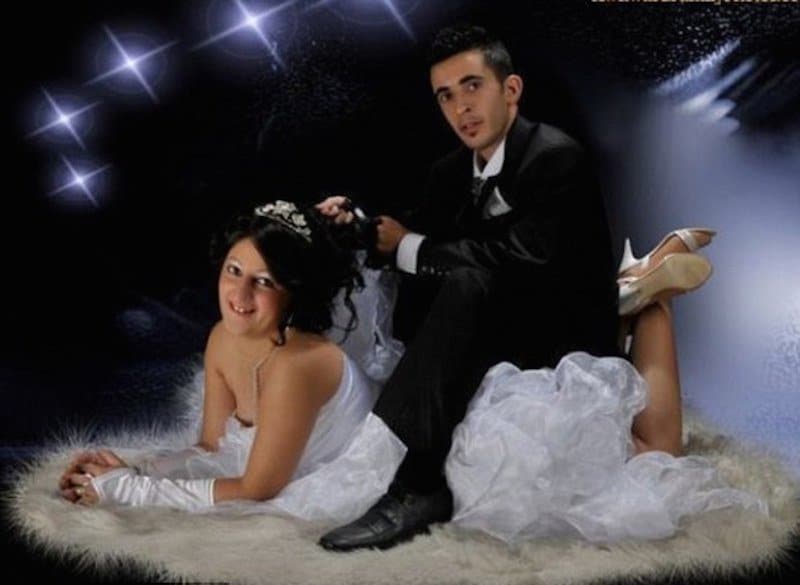 They had a professional cameraman taking photos at this prom and they brought a rug with them? Unless that is her hairstylist, why else would she be laying on the rug and letting him sit on her while doing her hair? 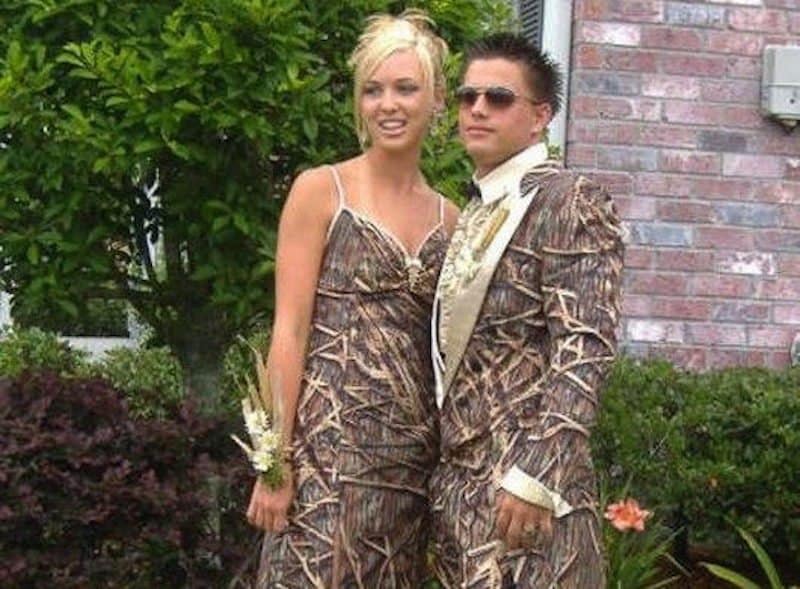 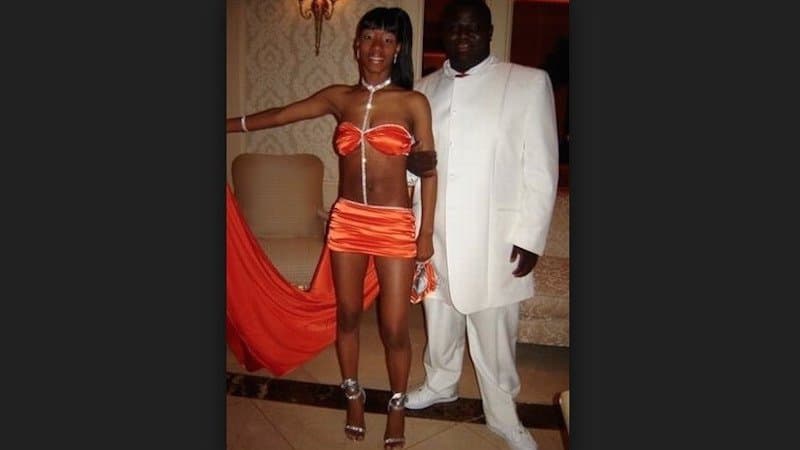 We are thinking that this girl forgot the rest of her dress. Or maybe the guy went to the local strip club to find his date for the night and told her just to wear what she had on. 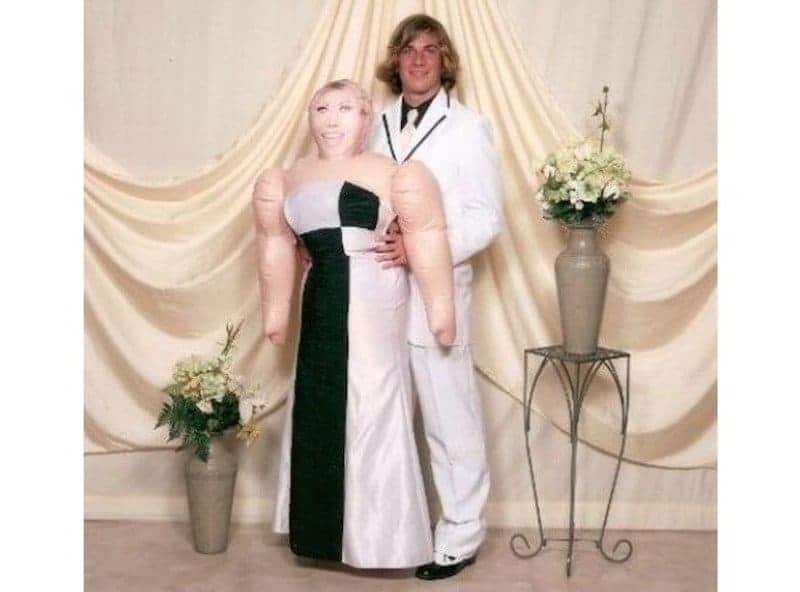 We are not believing this one. That is a good-looking kid, so we are pretty sure he could find himself a date and he did not have to blow one up before getting there. With that being said, at least they coordinated their outfits!

Who invited Barney to the prom? We aren’t quite sure what to make of this photo. Is it a guy with three girls as dates and Barney is impressed or maybe it is a family photo at prom, as the girls do have similar looks. That still doesn’t explain why Barney is there though! 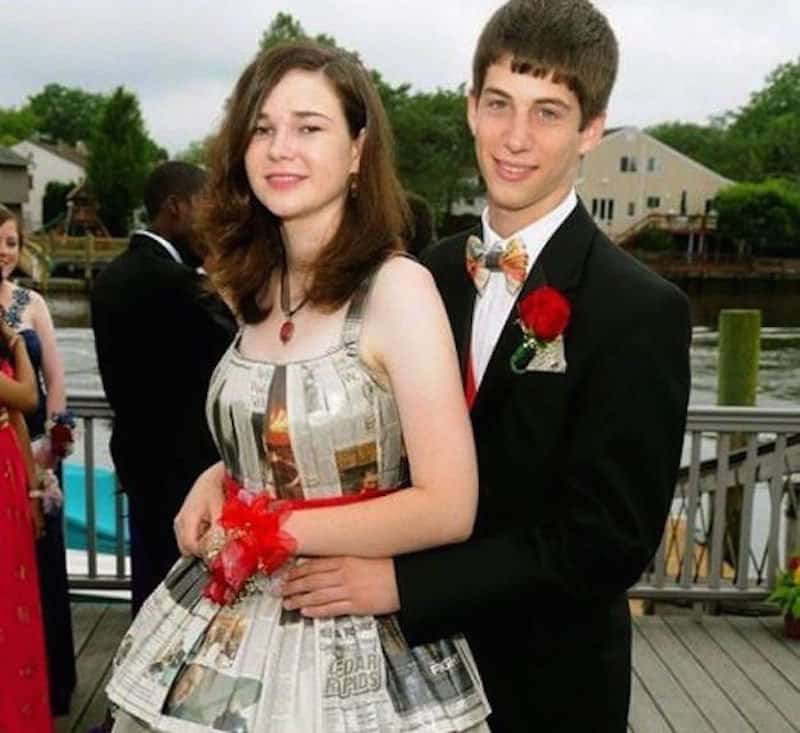 While the dress is creative and props to her for making a prom dress using a newspaper, but it is still a fail. She spent too much time making that and could have bought one off the rack that was much cuter. 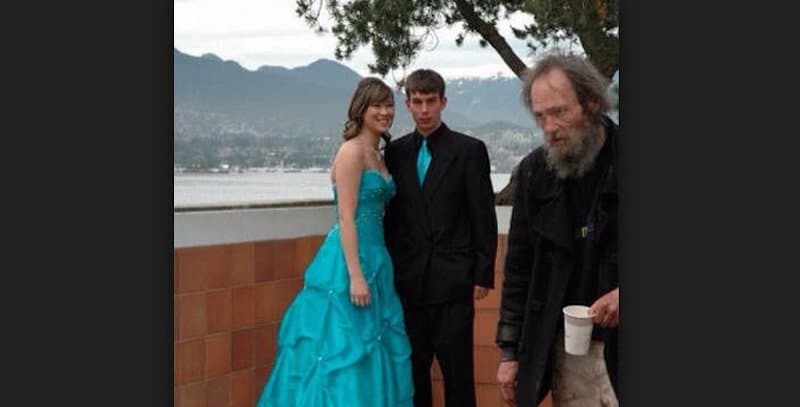 The kids were just wanting to take a nice photo on their big prom night, but this homeless guy had other things on his mind. We love that he is in his own world and doesn’t see the photo going on. Maybe if they would have put some change in that cup he would have left them alone. 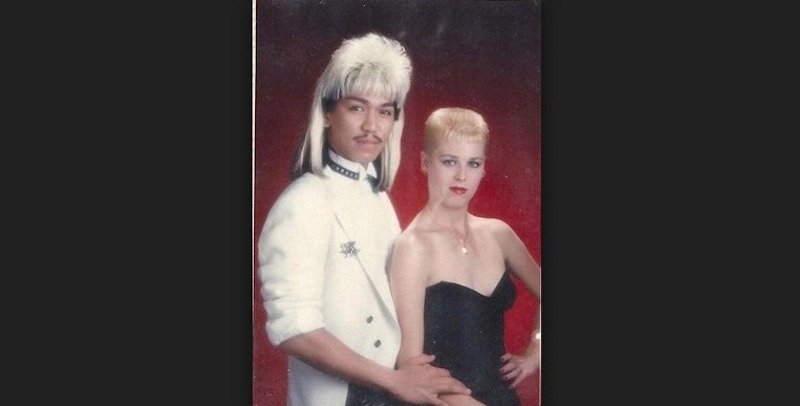 We look at this photo and think that their hairstyles are flipped! She should be having the big bangs in front and the sexy blonde mullet in the back. He should have the buzz cut going on. That mullet is too much for us to handle though! 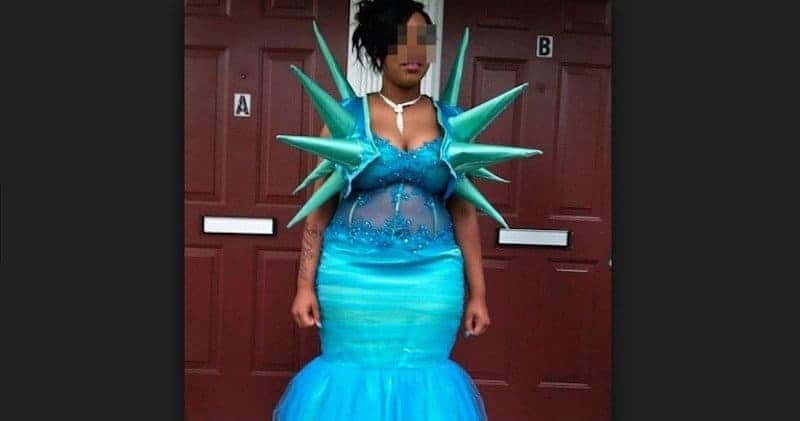 For some reason, we look at this dress and we are getting a Statue of Liberty meets mermaid vibe from it. There also seems to be a whole lot of woman in that dress, especially for someone going to prom! 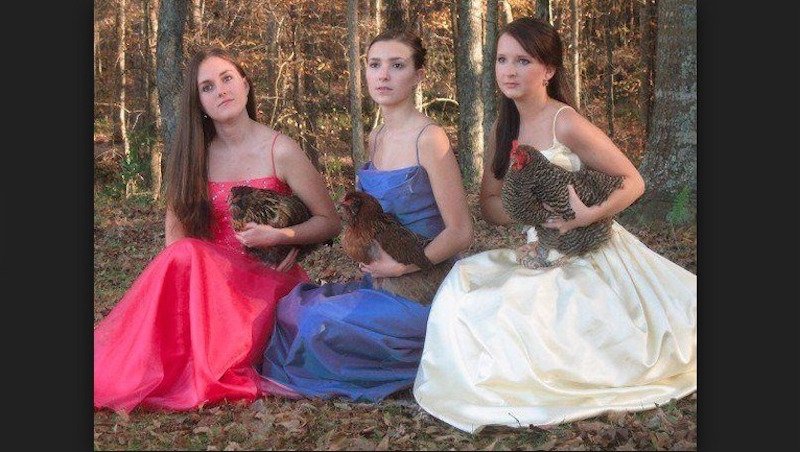 No one asked these girls to the prom, so they went out and found their own dates. It looks like no one was interested, so they got chickens to fill in. Did the girls catch the chickens on their own while wearing the dresses? We want video of this moment! 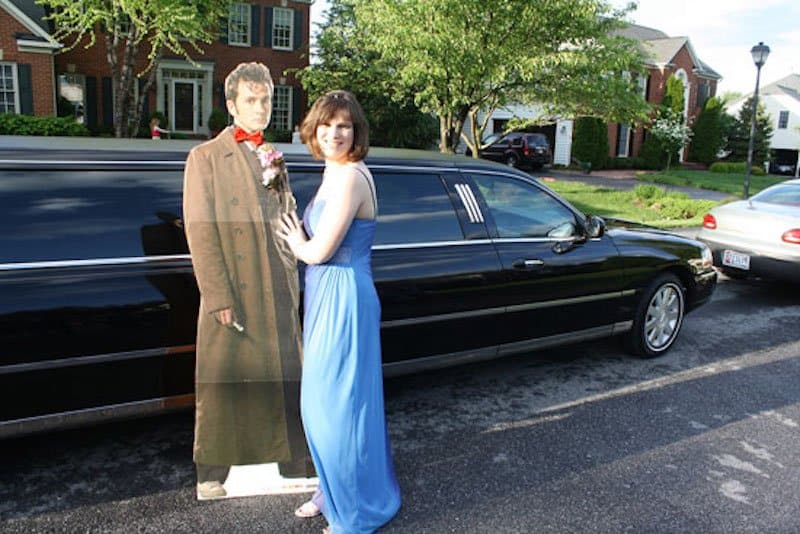 This girl was not able to catch a chicken, so she just went with a cutout cupboard date. That is going to make for some awkward dancing at the prom, but at least she won’t be dancing alone.

You are allowed to love Winnie the Pooh, especially since he is such a cute little bear. However, you are not allowed to go to prom wearing a Winnie the Pooh dress and tuxedo. She must have promised something very special after the dance to get him to wear that vest. 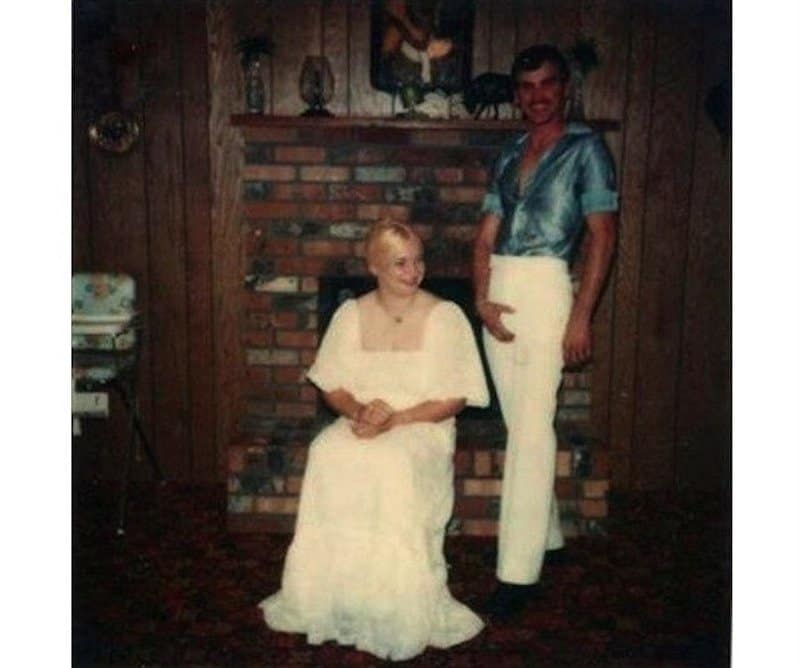 Those outfits just crack us up, but why would this guy grab his junk when the photo is being taken? She seems to like it, but I wonder where they are at right now and what their thoughts on this photo would be. 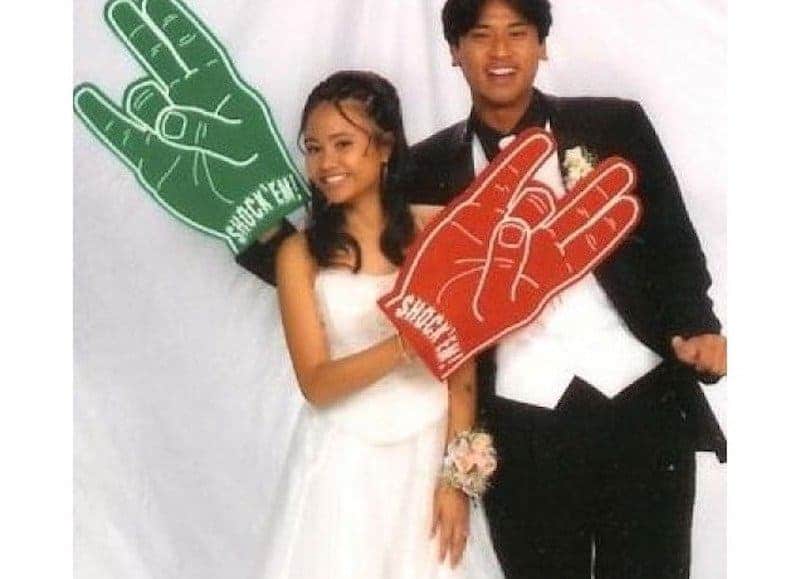 It looks like we know what they are doing as soon as the prom ends! No clue why the foam fingers are at a prom, but she looks too happy to truly know what a shocker is.

Keep It In Your Pants 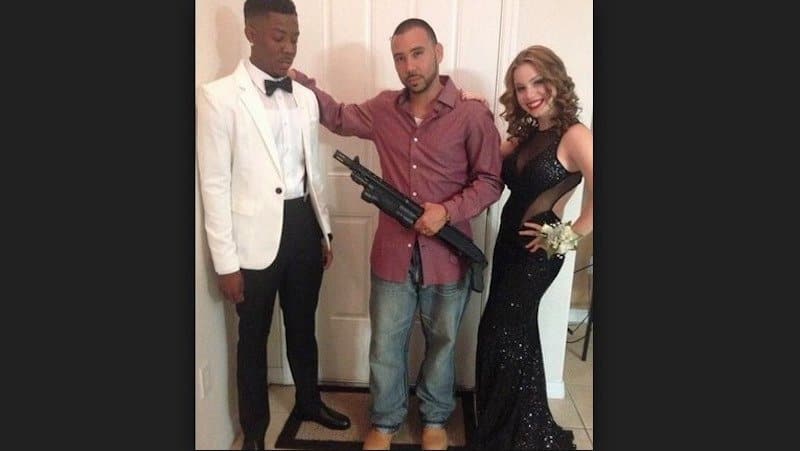 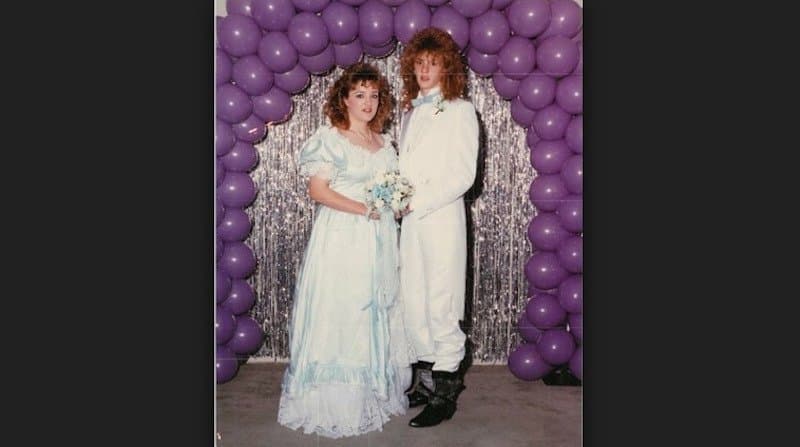 This couple decided to have a “who has the biggest hair” contest for their prom night. The sad thing: the guy actually won the contest. The 80’s meant big hair all around and these two did not disappoint. 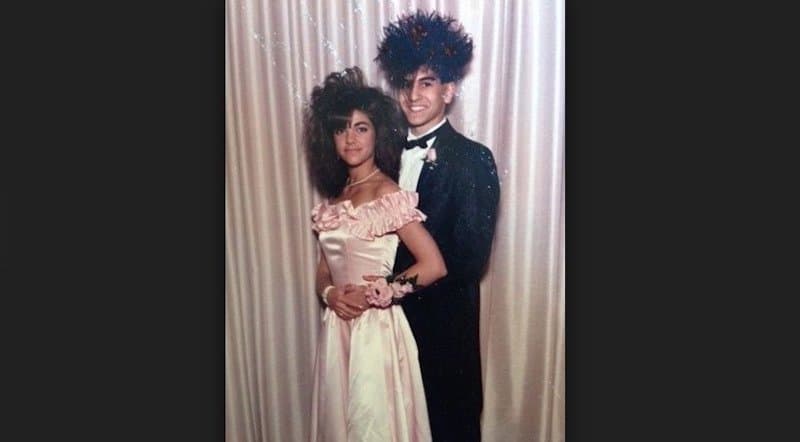 Another couple entered that biggest hair contest and the guy wins again! His hair is literally standing straight up and that is a lot of Aqua Net to keep that in the air all night long. 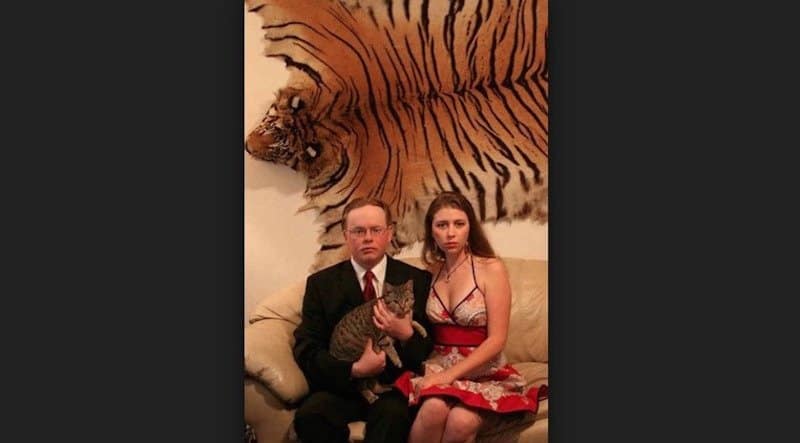 Maybe they had a cat theme for their prom, but who would pose with a cat for their prom photos? Then add in the tiger on the wall and this is too much to handle and neither of them look thrilled to be there! 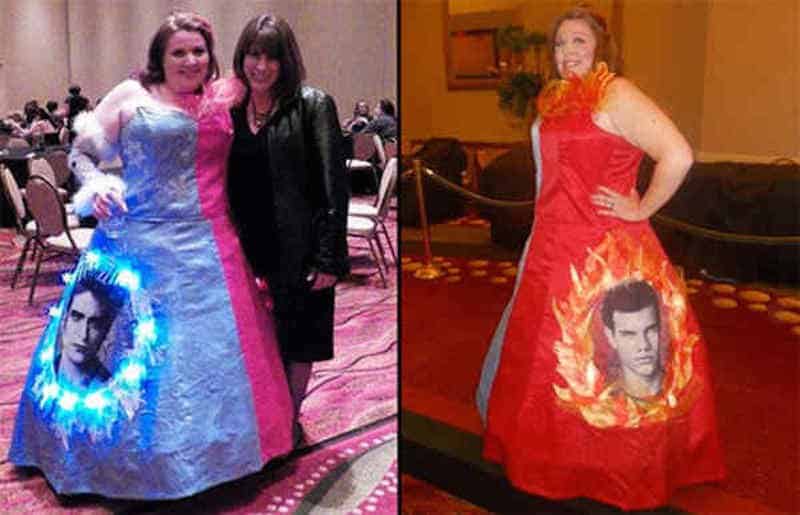 Nothing screams “I came alone tonight” like a Twilight-themed dress with Edward and Jacob on it. It looks like she has two dates for the night, but who is the lucky one to go home with her?