People often dream of living in the past. But history lovers note it wasn’t all as romantic as it might seem. The past was often a brutal, violent place, where the slightest legal or social infraction could result in a painful and gruesome death. Over the last few hundred years, most Western nations have done away with capital punishment altogether. But in the past, the goal was often to inflict as much pain as possible upon the person being executed.

There were a variety of reasons for this; some of them political, some of them religious, some of them for purposes of intimidation. Whatever the reasons, the execution methods of the past sure were grisly. Read on to discover history’s most gruesome methods of execution. 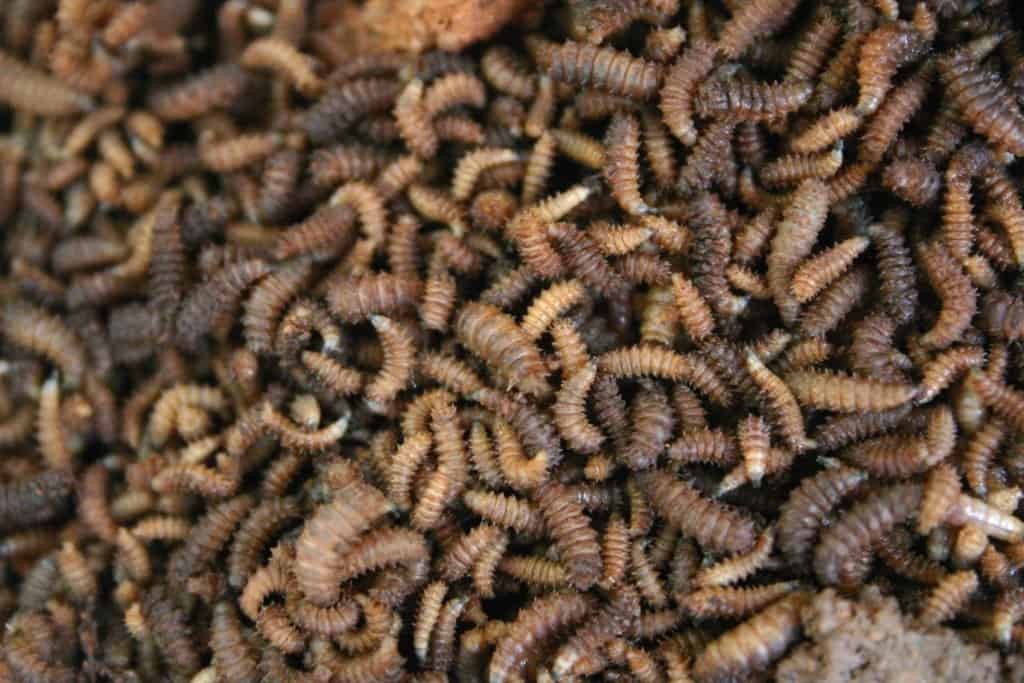 Scaphism (also known as “the boats”) was an ancient Persian method of execution, whereby the condemned was fastened to the interior of a small rowboat or hollowed-out tree trunk. Only the victim’s arms, legs, and head protruded from the boat, which was then set adrift in a swamp.

The victim was force fed milk and honey until they developed severe diarrhea. More honey was slathered all over the victim’s body, with particular emphasis on the eyes, ears, and mouth.

The honey attracted insects, which would breed in the victim’s feces and eventually, inside their gangrenous skin. Death followed days or weeks of dehydration, starvation, and delirium. 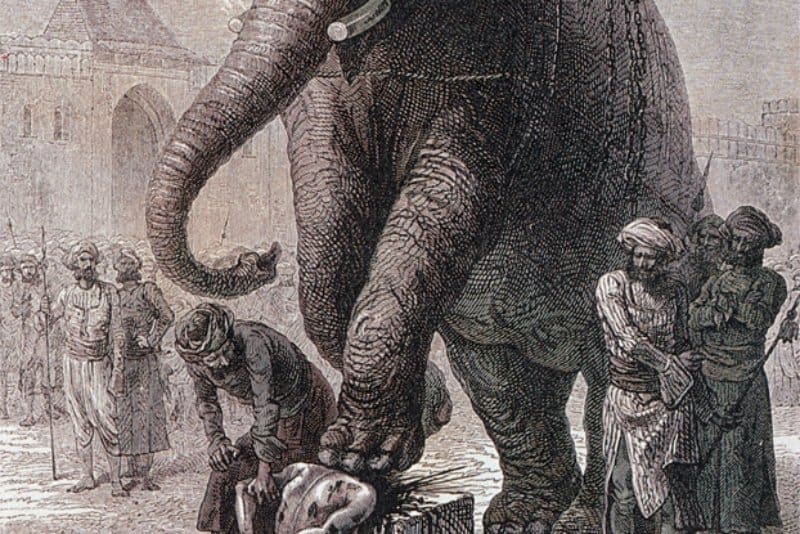 Death by elephant was a common method of execution in Southern and Southeastern Asia, although Western powers like Rome and Carthage occasionally employed it as well.

Death either came swiftly or slowly, depending on the severity of your crime. The trained elephant would either crush your head, bringing about instantaneous death, or crush all of your limbs, one by one. 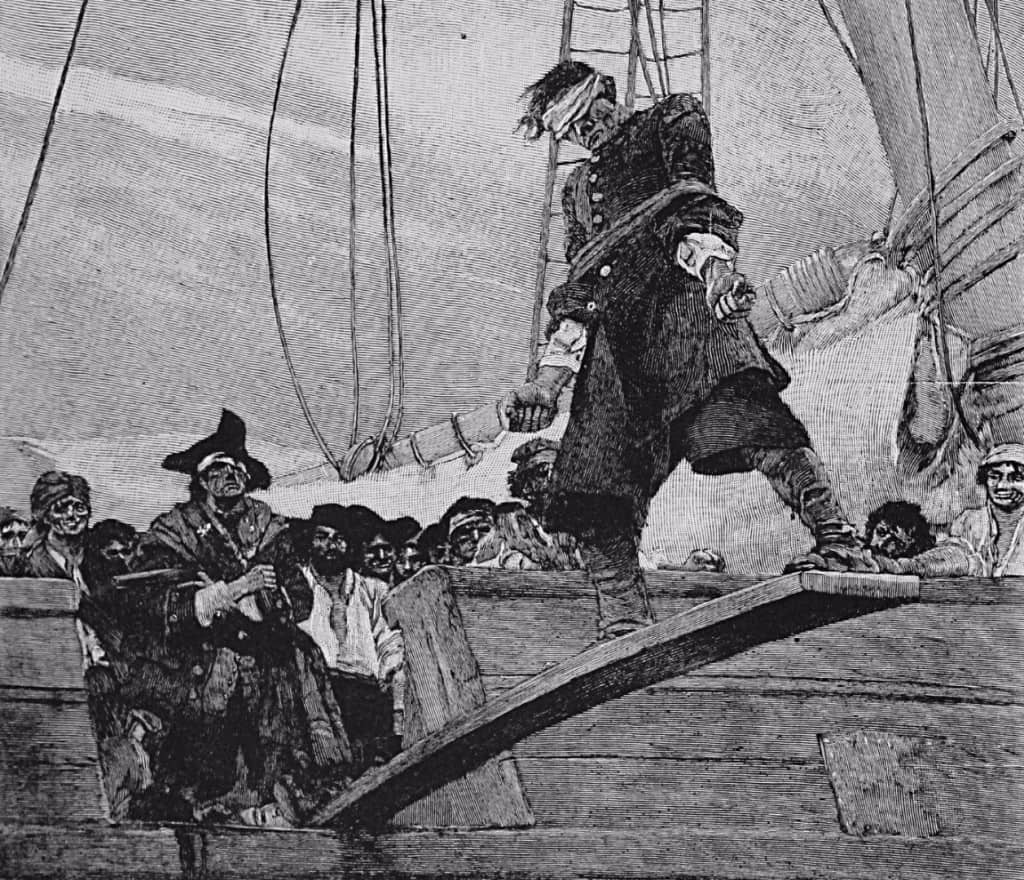 This method of execution is so steeped in pirate lore, many assume it must be fictional. There are, however, many documented incidents of pirates and mutineers tying a victim’s hands and forcing them to walk off a plank and plunge into the waters below.

There were much easier ways of disposing of an unwanted prisoner, so the practice is thought to have been reserved for special occasions—a sadistic sideshow for bored sailors. 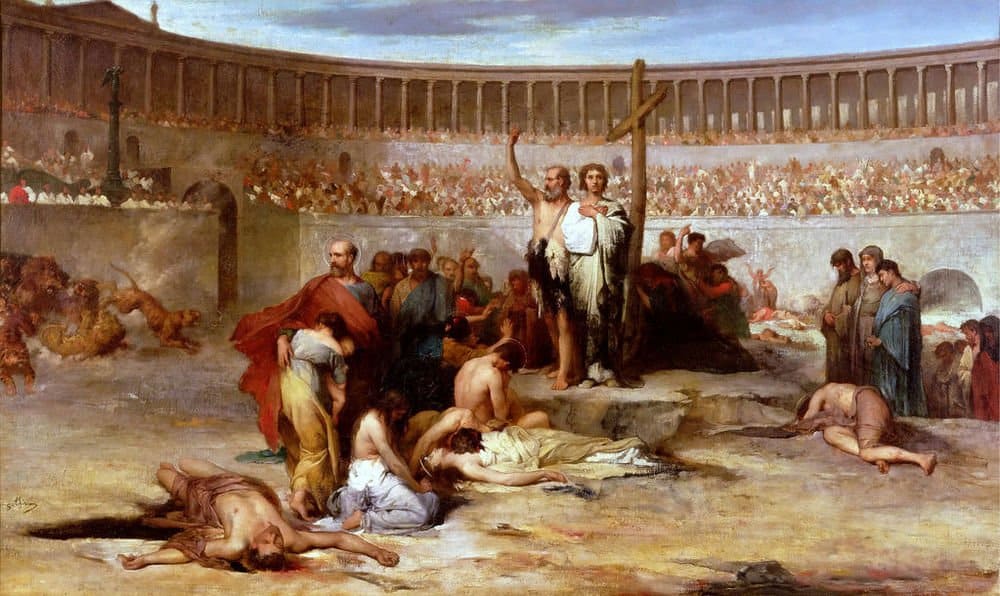 In Ancient Rome, huge crowds gathered in amphitheaters to witness brutally inhumane executions and fights to the death as a form of entertainment.

The Bestiarii were one of the favorite events at these gatherings. Prisoners would be rounded up and sent to the center of the arena. Wild beasts like lions and tigers would be released and provoked into a frenzy by their handlers. The animals would remain in the arena until they had mauled and killed every last prisoner.

It’s important to note that some entered the arena voluntarily for money or recognition, but these fighters were given weapons and armor and fought purely for the entertainment of the crowd, while criminals or political prisoners were forced into the arena naked and with little chance to defend themselves. 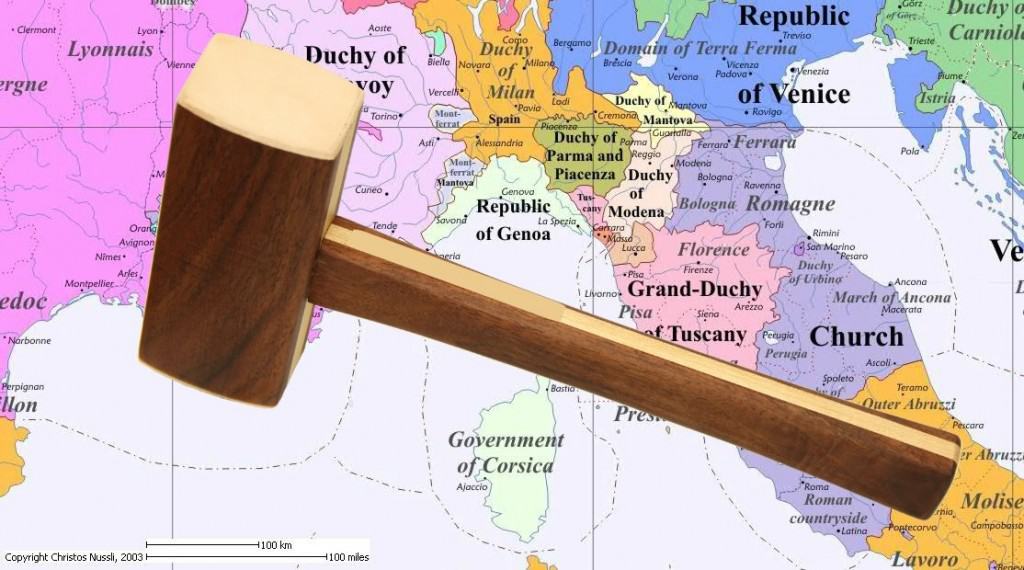 Mazzatello is perhaps the strangest and most unnecessary form of execution on our list.

Popular in the Papal States, the condemned prisoner was led to a public square. There, they were hit over the head once with a large wooden mallet. This alone rarely resulted in death, so the condemned’s throat would then be slit to finish the job. One wonders why they didn’t just leave the mallet part out altogether. 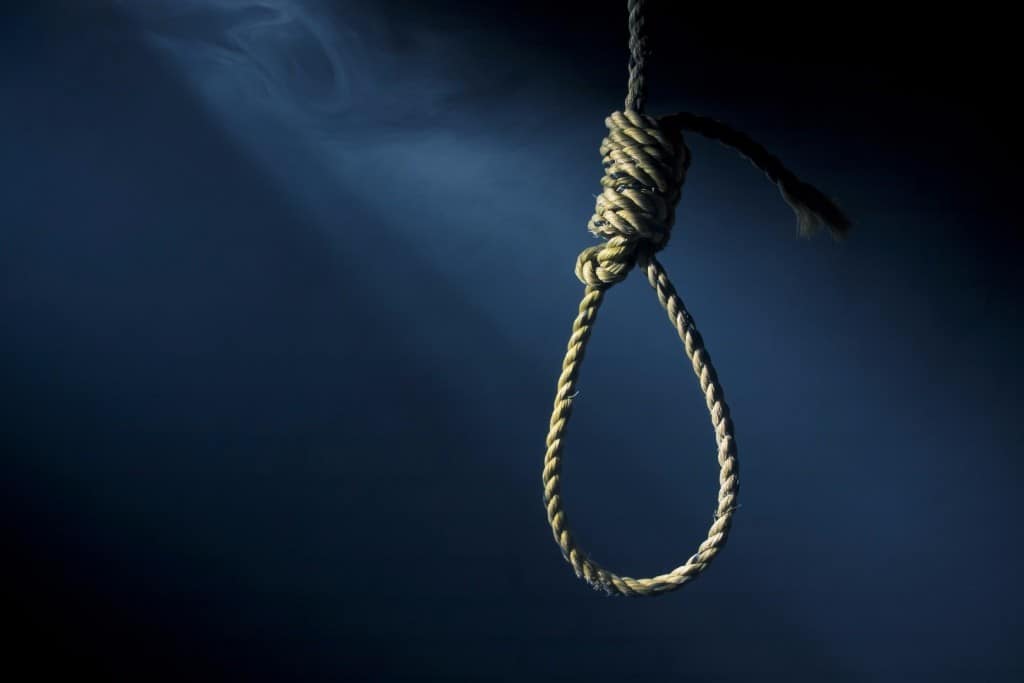 The upright jerker was an execution device invented in the United States during the 19th Century.

A noose would be fastened around the condemned’s neck, and a mechanical pulley system would jerk the rope, along with the victim, upward. The swift action broke the victim’s neck, with the goal of making death instantaneous. It was intended to replace traditional hanging, but it didn’t see widespread use. 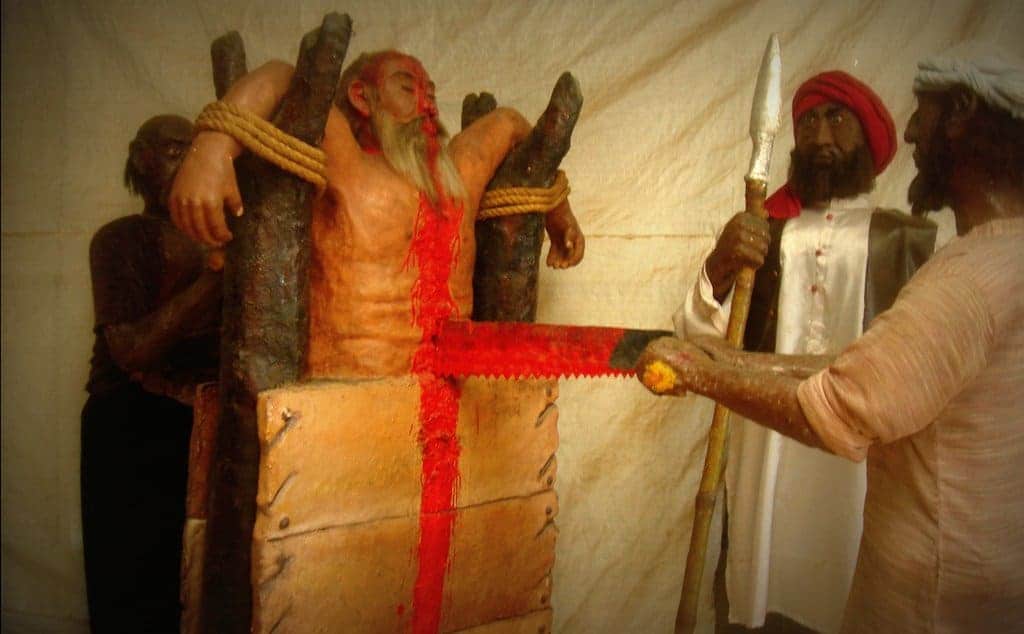 Death by sawing has been used as an execution method by cultures across the globe. Often, the condemned would be hung upside down, allowing executioners to begin sawing at the genitals. The inverted posture allowed enough blood to flow into the brain to keep the victim alive for most of the horrendous experience. 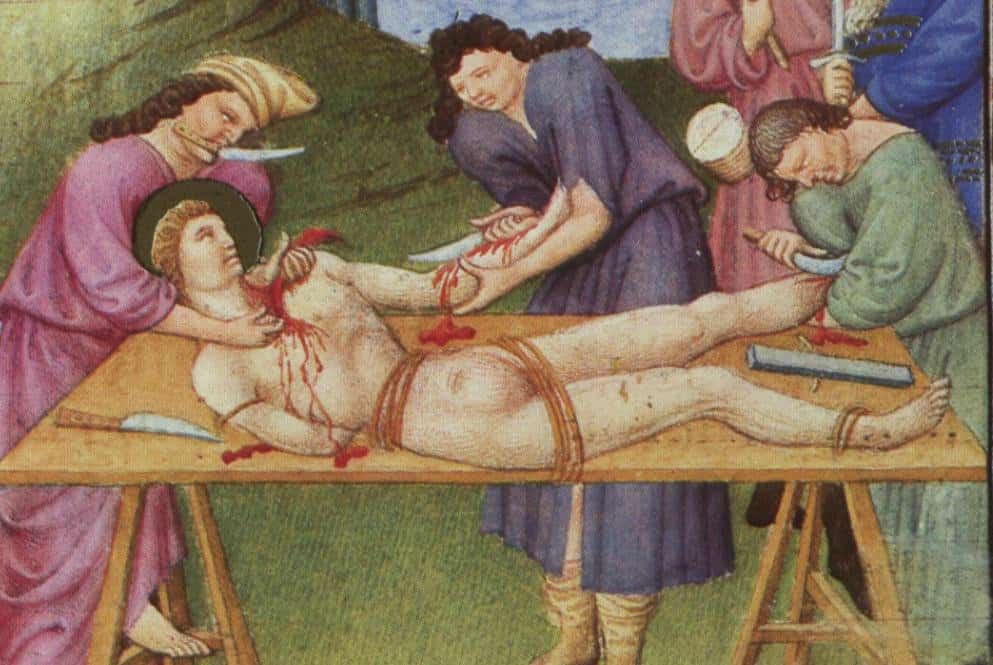 Flaying, or removing the skin, has also been used as an execution method by various cultures. The victim is restrained while their skin is painfully cut from their body. Death occurred due to shock, loss of blood, hypothermia, or infections, and it could take hours or weeks for the flayed individual to die from their injuries.

In some cultures, the skin of the individual was hung in a public place to warn others about the consequences for disobeying the law. 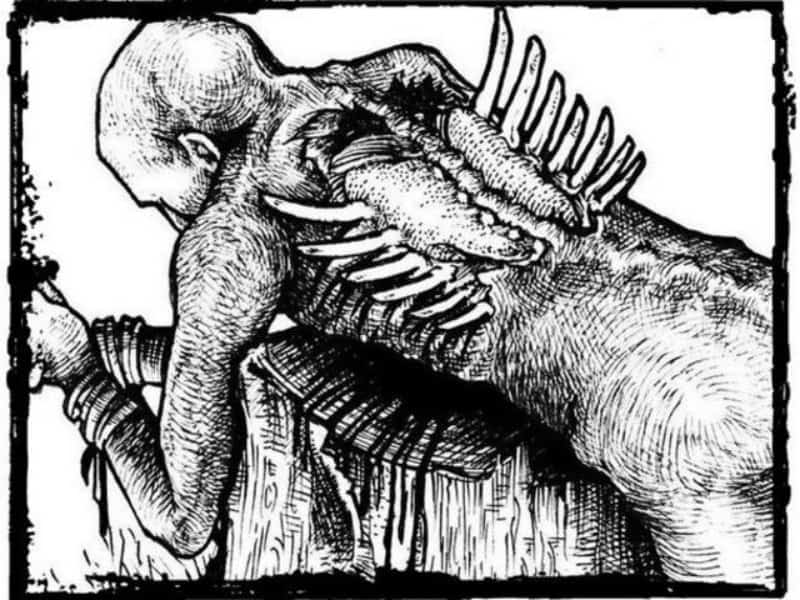 A blood eagle is a ritualistic method of execution described in Nordic poetry. The condemned individual’s ribs would be cut near the spine and broken to resemble wings. Their lungs would then be pulled out from the opening.

There is some debate about whether or not the ritual was a fictional literary device or an actual historical practice, but many agree the details are too lurid not to have some basis in historical fact. 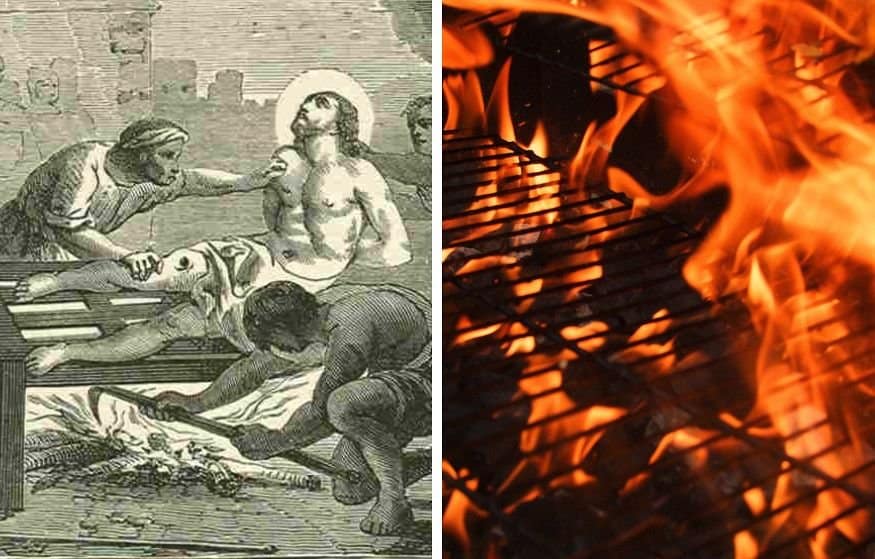 Imagine slowly roasting alive above a bed of hot coals. That’s what happened to victims of the gridiron, a method of execution even worse than the well-known practice of burning at the stake.

Death came slowly as skin peeled and fleshed melted from the victim’s bones. 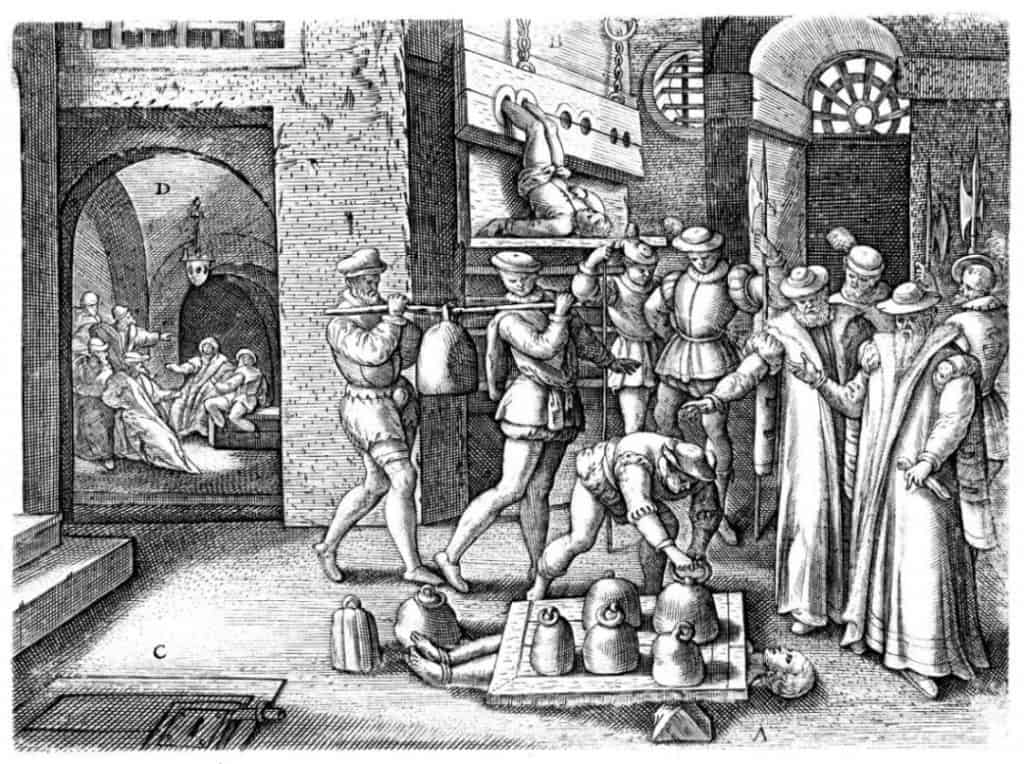 Crushing was both a torture technique and a method of execution. If a defendant “stood mute”, or refused to enter a plea in a legal dispute, they would be placed under a large wooden board. Weights would slowly be added until the defendant spoke, otherwise fatal suffocation would occur.

In other words, refusing to cooperate with the court was itself a death sentence. 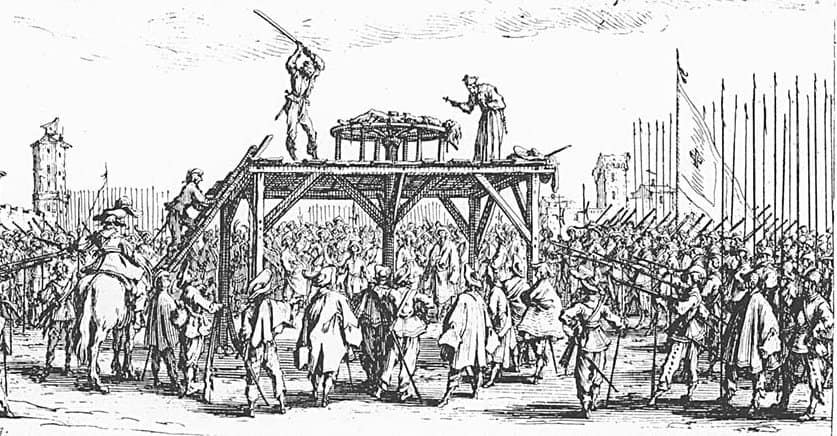 The breaking wheel is one of the most brutal and recognizable execution methods on our list. Reserved for particularly nasty offenders, the condemned was strapped to a large, spoked wheel. They were then beaten with clubs or other blunt instruments.

The gaps in the wheel allowed the bones to break cleanly, prolonging death by hours or days. 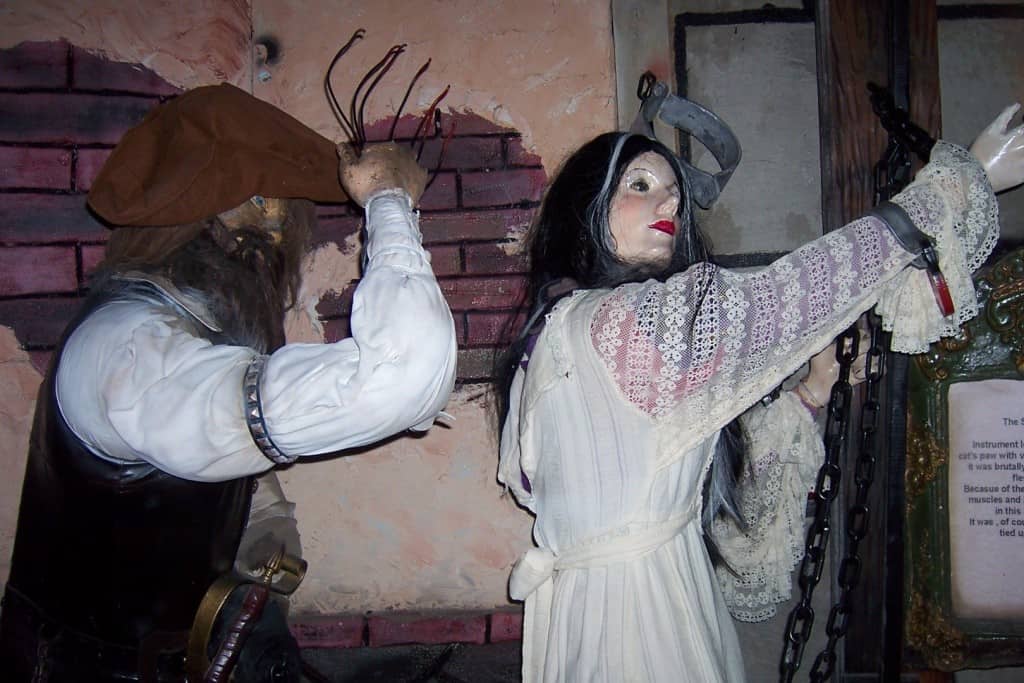 The Spanish Tickler, also known as The Cat’s Paw, was an inquisition era weapon, torture device, and method of execution. The device was attached to the executioner’s hand, allowing him to peel the flesh off of his victims with ease. A specific type of flaying alive, the victim often died much later due to infection.

Burning At The Stake 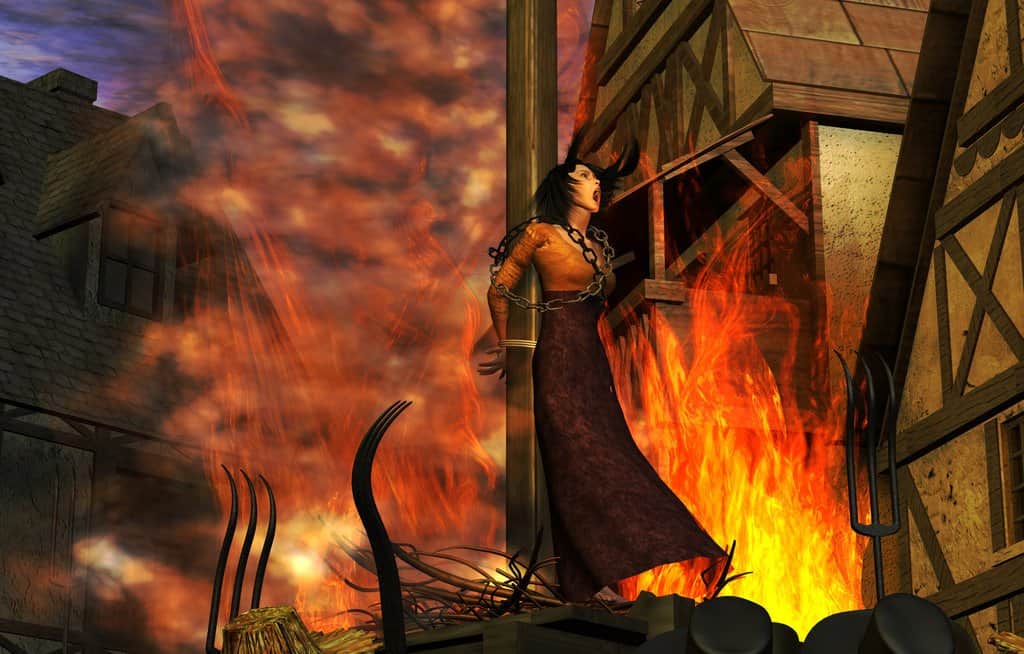 We’ve all seen this method of execution depicted in movies or television shows, but few realize just how widespread it was in medieval times and antiquity.

In Europe, the condemned person was often given the chance to confess for a lesser sentence—they would be strangled to death before the pyre was lit. Otherwise, they would either burn to death or die from smoke inhalation. 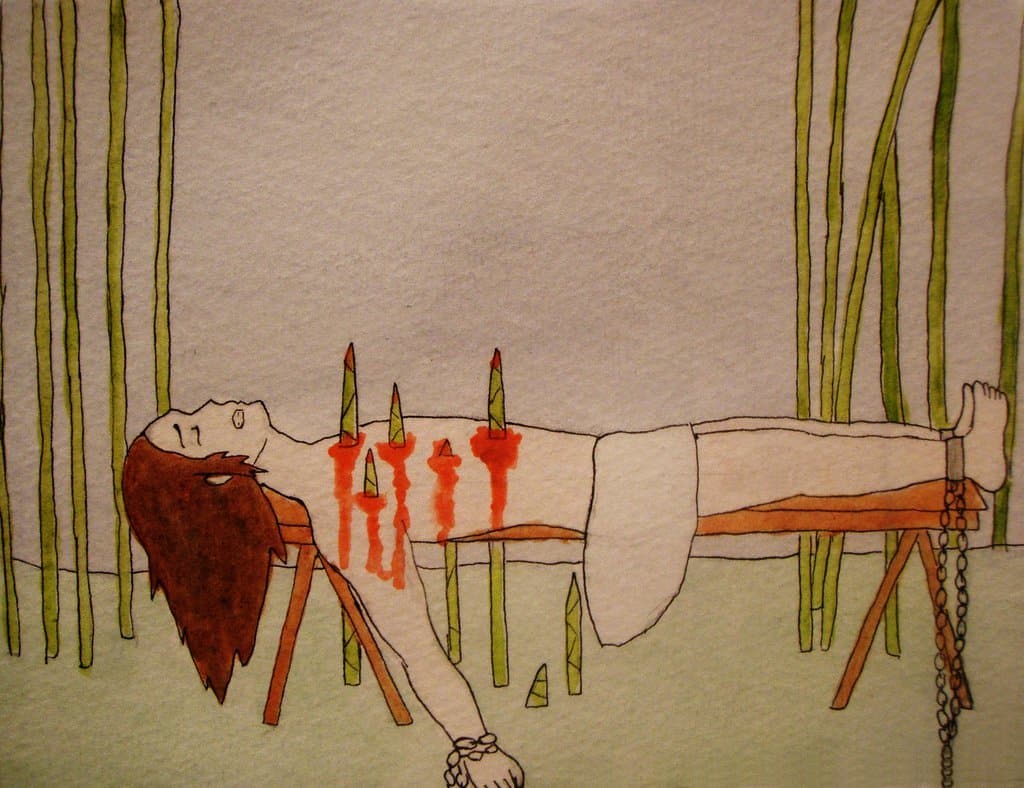 An unusual and highly painful method of execution is bamboo torture. It is thought the method was used in parts of Asia, and was reportedly used by Japanese soldiers during World War II.

The victim is laid down over a newly growing patch of bamboo. Over the next few weeks, the highly resilient plant continues to grow right through the victim’s body, eventually impaling them.

Victims were said to be kept alive through force feeding, making this slow and painful form of death even worse. 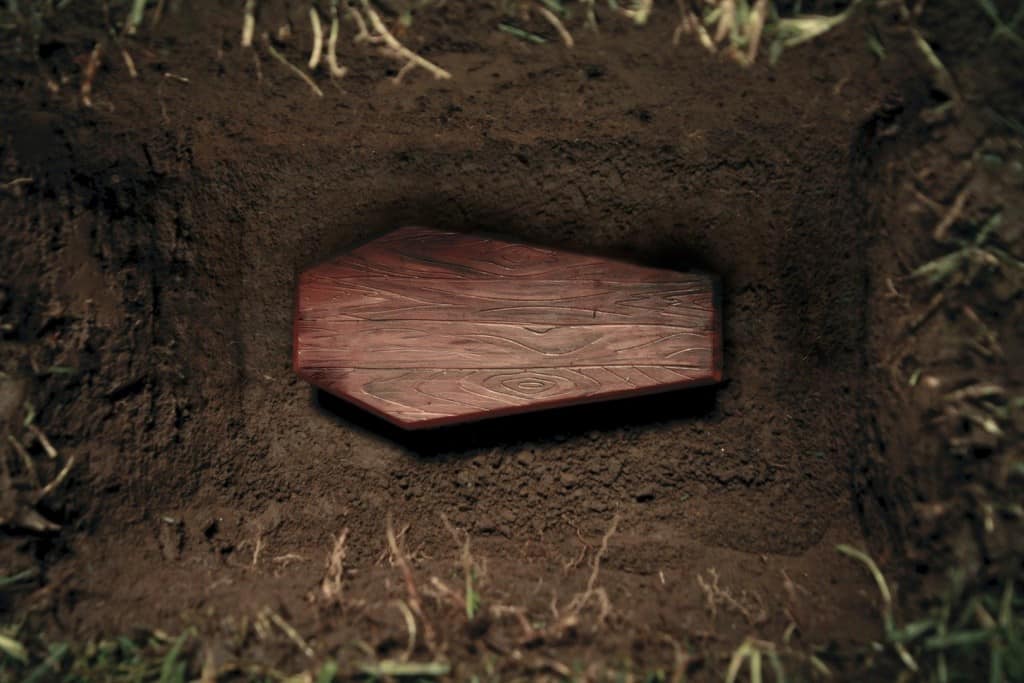 It seems to be an evolved human instinct. What do you do with things you don’t want around? Bury them, of course. Sadly, many cultures over the ages have applied this disposal technique to living human beings.

Death comes in the form of asphyxiation, dehydration, or worst of all—starvation. In some cases, fresh air was pumped into the coffin below, leaving the condemned person alive in utter darkness for days or weeks until they finally died. 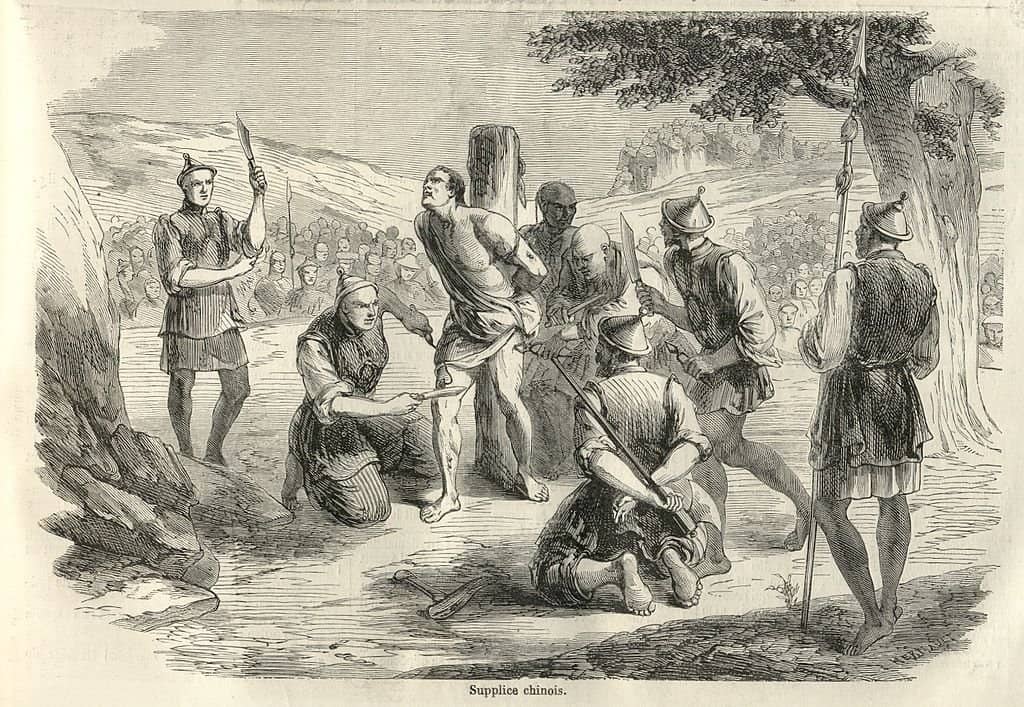 Lingchi, also known as “slow slicing” or “Death by a thousand cuts”, is a particularly gruesome execution method employed in China from ancient times until 1905.

The executioner would slowly, methodically slice away pieces of the victim, with the goal of keeping them alive as long as possible. 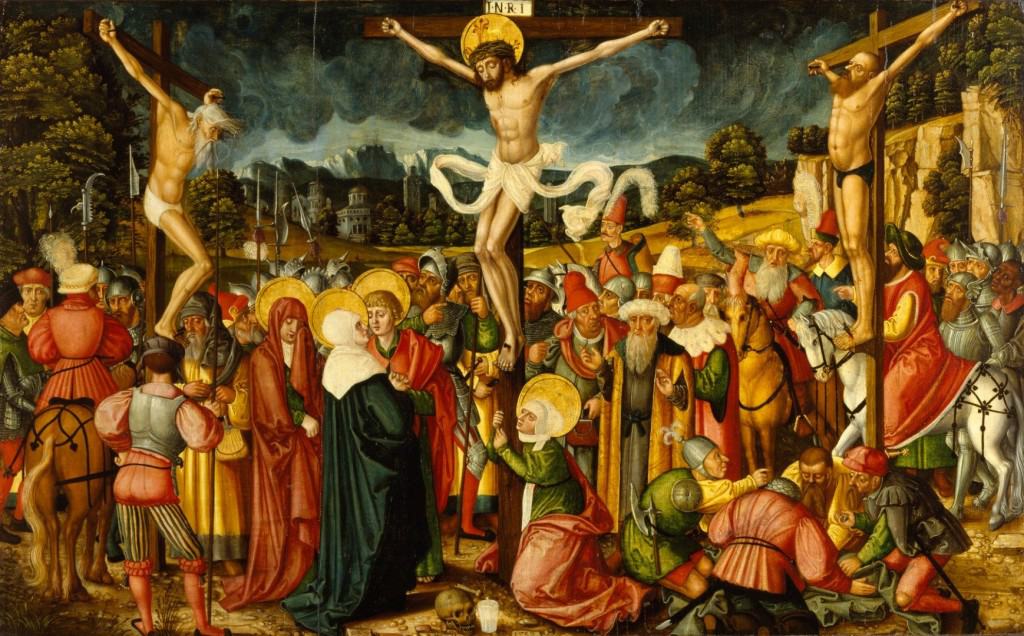 Were it not for the biblical account of Jesus’s execution by the Romans, this brutal form of execution would have faded into obscurity along with the other items on our list.

It was employed primarily by the Romans, and intended to be as painful and humiliating as possible. The condemned was fastened to a large wooden stake, either shaped with the classic crossbeam design or, somewhat more commonly, in a structure resembling the letter ‘X’.

The condemned person was forced to brace themselves in order to keep their body weight from asphyxiating them. Eventually, their legs either gave out or were broken in order to bring about death. 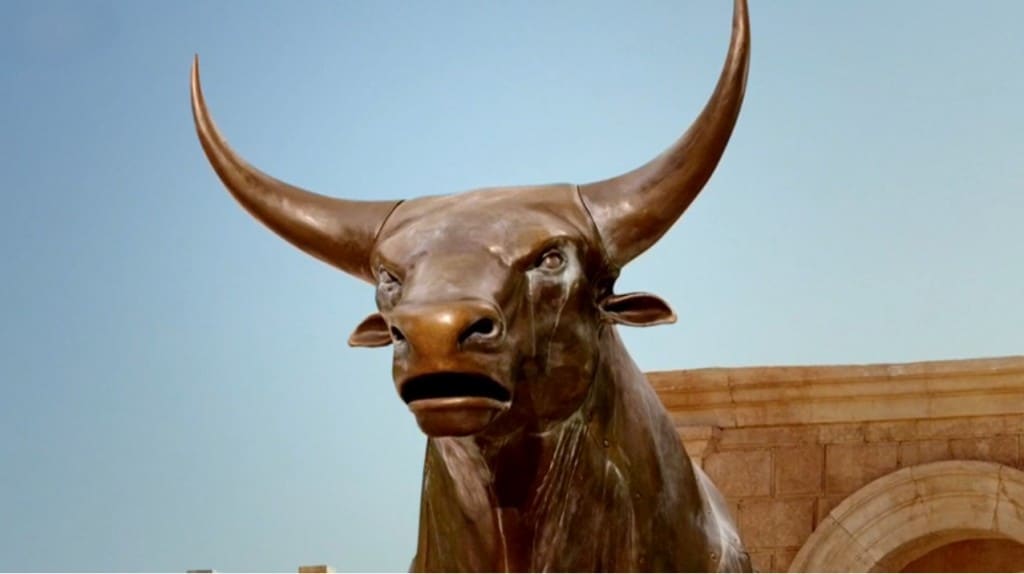 The brazen bull is perhaps the most sadistic, yet ingeniously designed execution devices ever devised. Made for the entertainment of the onlooking crowd, the condemned person was shoved inside a large, bronze statue of a bull. A fire was lit underneath, broiling the person alive.

The head of the bull was acoustically design to convert the helpless screams of the dying into beastly roars, while the smoke was directed out of the bull’s nose.

In a macabre twist of irony, the Brazen Bull’s designer was also the first person to be executed inside of it. 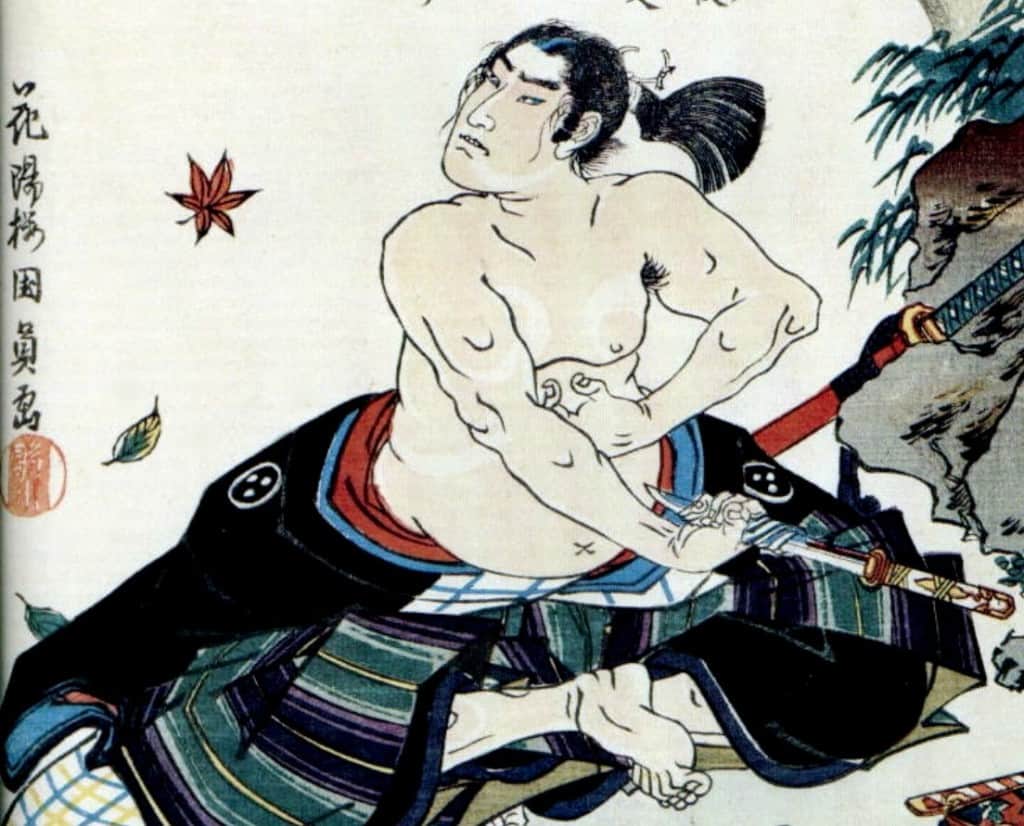 Half execution method, half ritual suicide, seppuku was a way for Japan’s noble warriors to end their life with their dignity and honor intact.

A nobleman or samurai would disembowel themselves with a specially designed short sword. A friend or relative would be standing by to decapitate the individual and ease their suffering.