20 Of The Craziest Video Games Ever Made

The video game industry has grown in the past decade from a niche hobby for supposed nerds and geeks into fully fledged entertainment juggernaut that makes billions of dollars every single year. The explosive popularity of consoles such as the Xbox and the PlayStation as well gaming on PCs is largely down to the great variety of titles that are available, ranging from expansive RPGs such as Skyrim or The Witcher to fast paced first-person shooters like Call of Duty or even sports games that include FIFA and Madden.

This vast range of different titles means that there is something out there for everyone, with games made to appeal to all types of tastes. However, this has led to some fairly bizarre games over the years. These titles don’t just include strange gameplay quirks or weird concepts, they are downright odd down to their very essence. 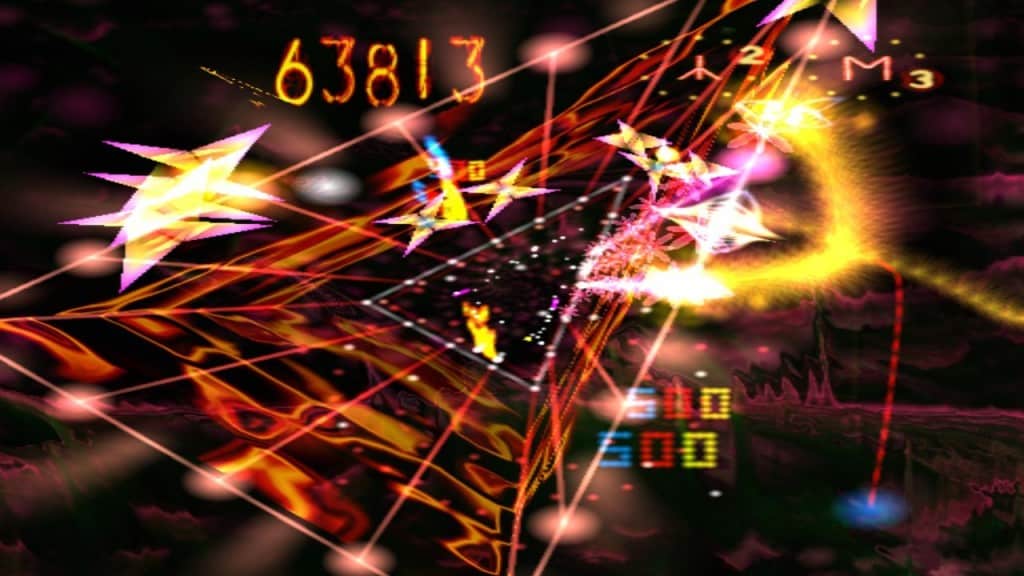 Space Giraffe is an action shooter game that was developed for the Xbox 360, releasing in 2007. It bears some resemblance to the classic arcade game Tempest and many consider it to be a spiritual successor. Featuring a pulsing soundtrack and psychedelic visuals, the game is almost hallucinogenic in nature. You control a Space Giraffe battling enemies through a variety of worlds, though it can be incredibly difficult to know exactly what is going on at any time. 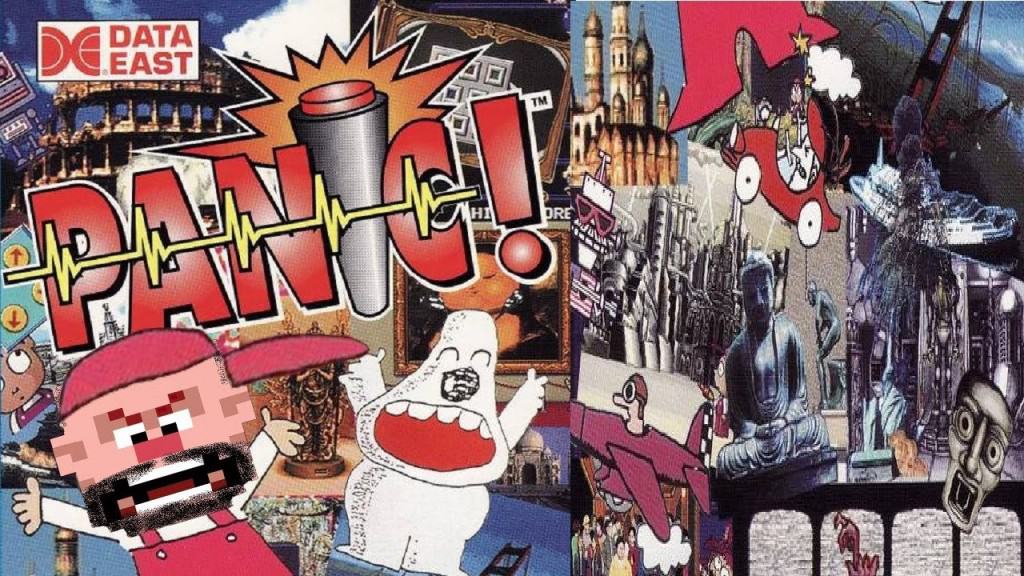 The Sega CD game Panic! was released in 1993 and tells the story of a young boy called Slap who has been sucked into his TV and must carry out certain tasks to escape. While that plot is itself weird, Panic! really came into its own with the gameplay. You simply had to press buttons on a controller that was shown on the screen without knowing what they would do, some would cause the game to continue, others would elicit drawn out jokes while others would cause famous monuments to explode. 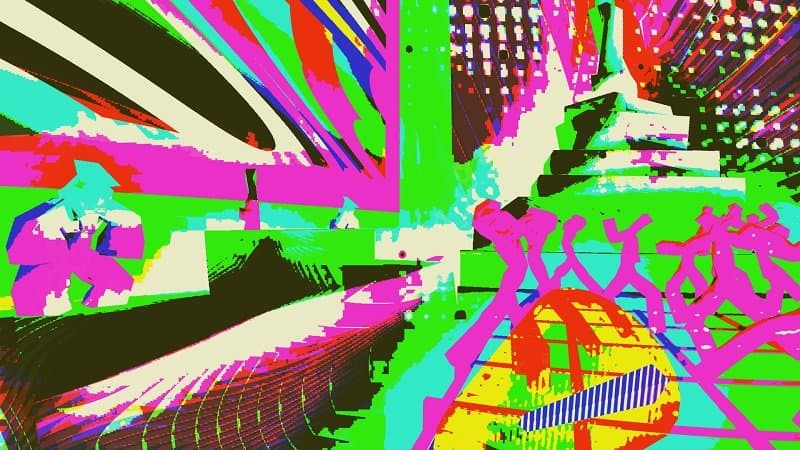 Some people would probably argue that Slave of God isn’t really a game, however its creators have always described it as a game and it has been accepted by most gaming outlets as an indie title. What you cannot argue with though is the fact that it is one of the most unique games ever made. Lasting just 11 minutes, Slave of God is set in a nightclub and pumps out loud music accompanied by florescent lights and strange visuals. It’s difficult to describe so it might be easier if you simply went and played it. 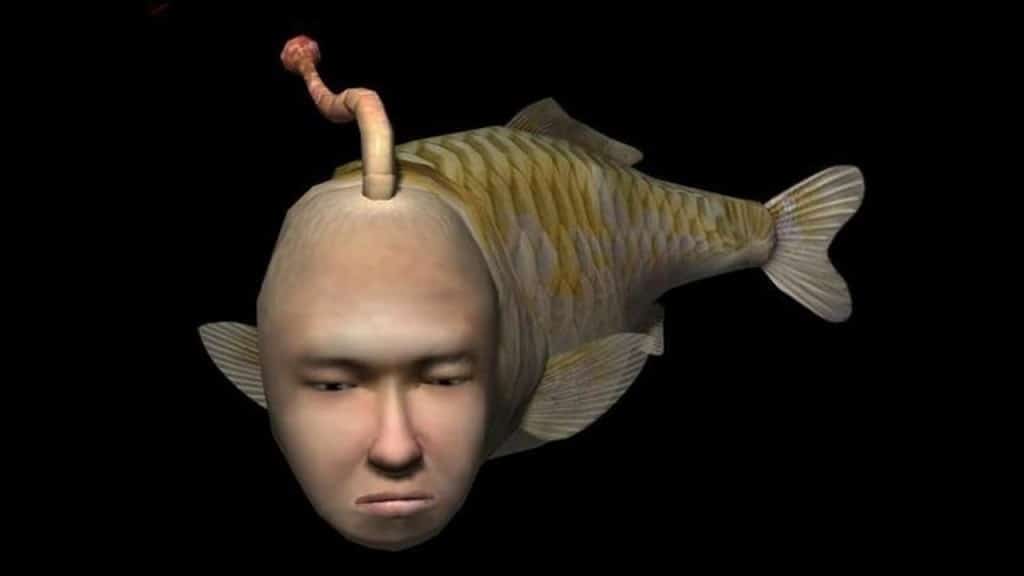 The Dreamcast, Sega’s last home console, had its fair share of off-the-wall games that weren’t exactly the standard titles you would expect to see. One of the most surreal was a virtual pet title called Seaman, which centered on the player looking after a fish-like creature with a remarkably life-life human face. By feeding, interacting and generally looking after the seaman, it would eventually learn new things and evolve into its final form of a frogman.

Typing of the Dead 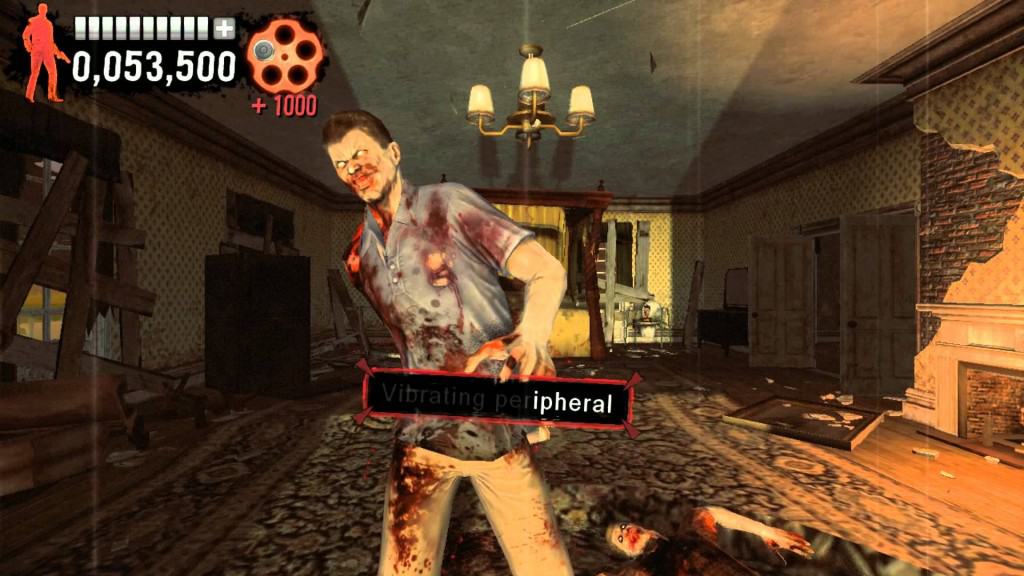 A mod of the popular arcade game House of the Dead 2, Typing of the Dead released in 1999. Instead of using a plastic gun controller to aim at the zombies and blow off their heads as in the original game, the new version followed a slightly different route. The characters were all equipped with keyboards and the player would have to type words and phrases that appeared on screen accurately and as quickly as possible to kill the zombie hordes. 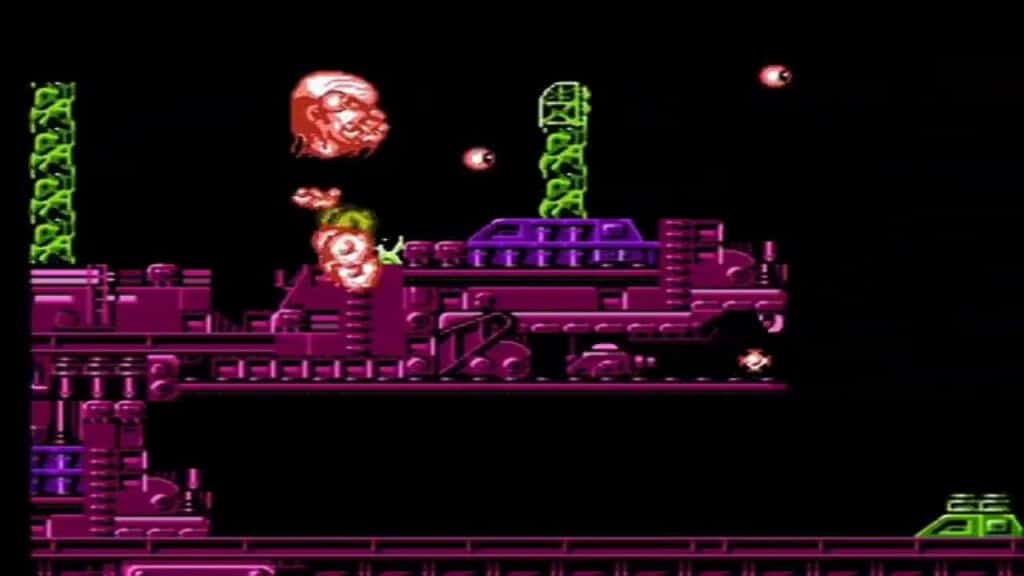 Samurai Zombie Nation, or just Zombie Nation if you go by the label on the cartridge, is an action game that released in 1990 for the NES. Even in the early 90’s, zombie games were just as popular as they are now but this particular game was unlike anything else with the undead monsters in. You took on the role of the floating head of samurai warrior Namakubi as he attempts to destroy an alien that has crashed into the earth and turned the entire population in zombies. To top off the craziness you actually kill enemies by firing eyeballs or vomit at them. 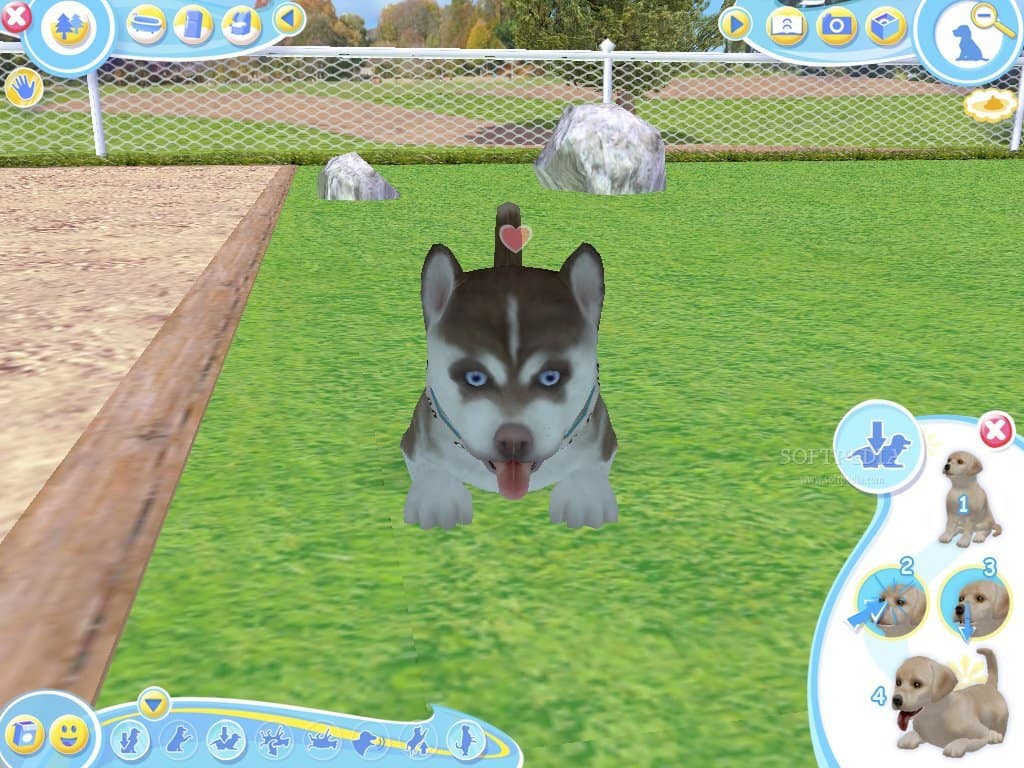 Plenty of young girls are into fashion and the Nintendo DS had some successful pet simulators, so it must have made sense to the developers behind Petz Dogz Fashion to combine the two concepts into one bizarre game. Gameplay revolves around dressing up dogs, buying new accessories, creating new clothing, and entering competitions against the computer to prove just how fashionable you and your dog are. 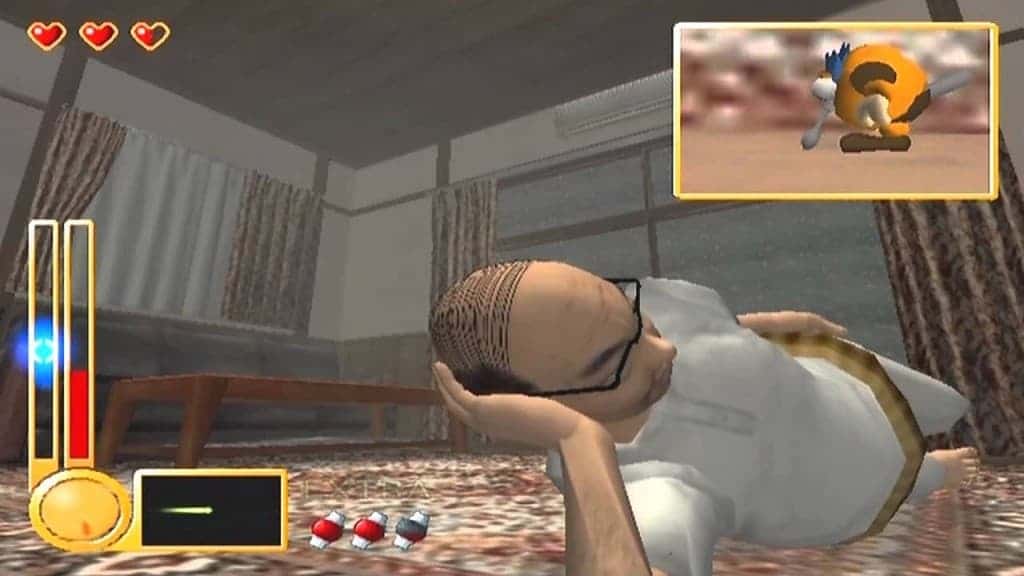 Mister Mosquito is almost exactly what you might imagine a game with that name would be. The 2002 PlayStation 2 title puts the player in the role of a large mosquito who must travel around sucking up blood from unsuspecting victims, without waking them up or being killed. You need enough blood to survive the long cold winter or else the eponymous ‘hero’ will die. Who would have thought you could make a game about an insect that kills millions of people every year? 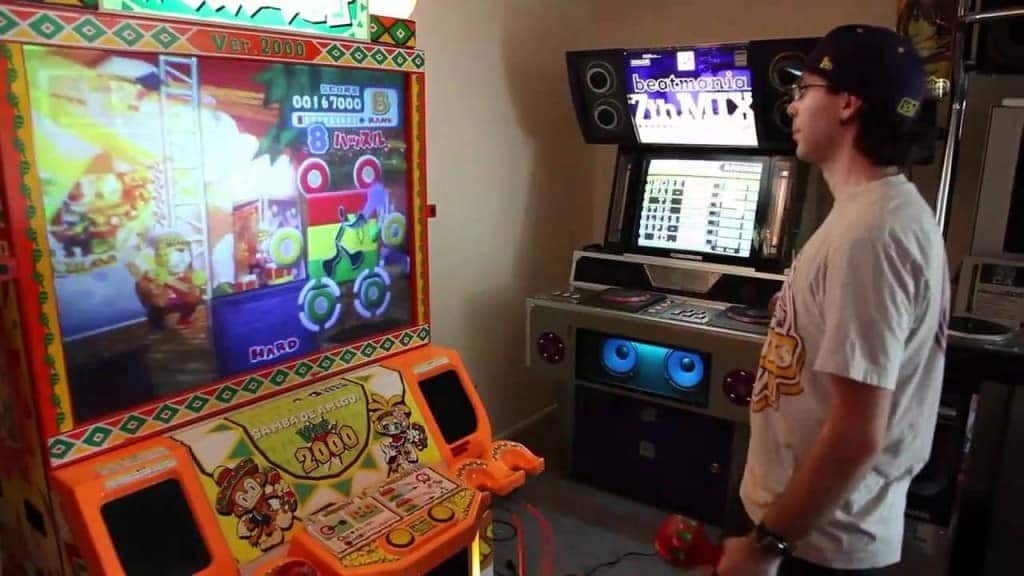 Rhythm games saw a rapid growth in popularity after the release of Guitar Hero II, although there have been plenty of games in the genre since the early days of the industry. One of these was the 1999 release Samba de Amigo, which was available in arcades and on the ill-fated Dreamcast. It involved players playing along to the Latin music with electronic maracas that plugged into the machine. With an overly complicated set up, vividly colorful visuals and strange gameplay, Samba de Amigo is one of the strangest games to come out of Sega. 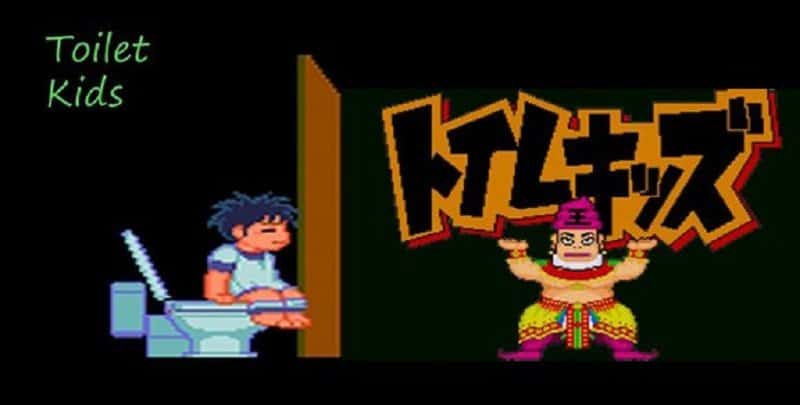 Another example of a crazy game that came out of Japan is Toilet Kids. It looks very much like any other game from that time at first glance but after some brief investigation you will find that it is far from a normal video game. It tells the story of a boy who is transported to a magical world after being sucked down a toilet. The player then has to battle his way through the world while fighting living excrement. 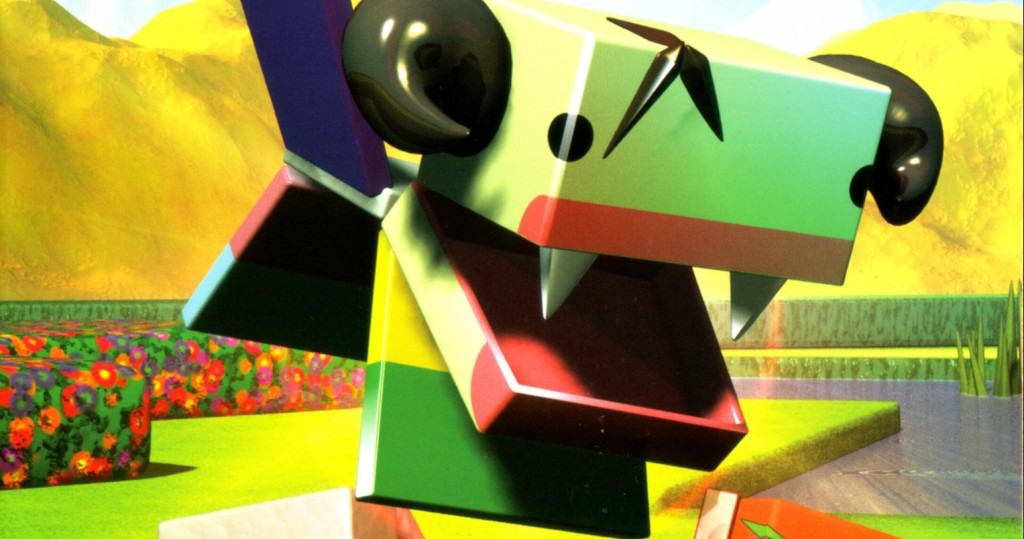 The aim of the GameCube game Cubivore is to become the dominant creature in the world. To do that you must eat other cubivores, small cube shaped animals with limbs and bright colors, to mutate and take on new abilities and strengths. This allows the player to fight bigger enemies and destroy other cubivores, setting themselves up as the dominant figure. It also included a mating mechanic whereby you could entice females to mate with you, with your success depending on how strong your character was and how many mutations it had. 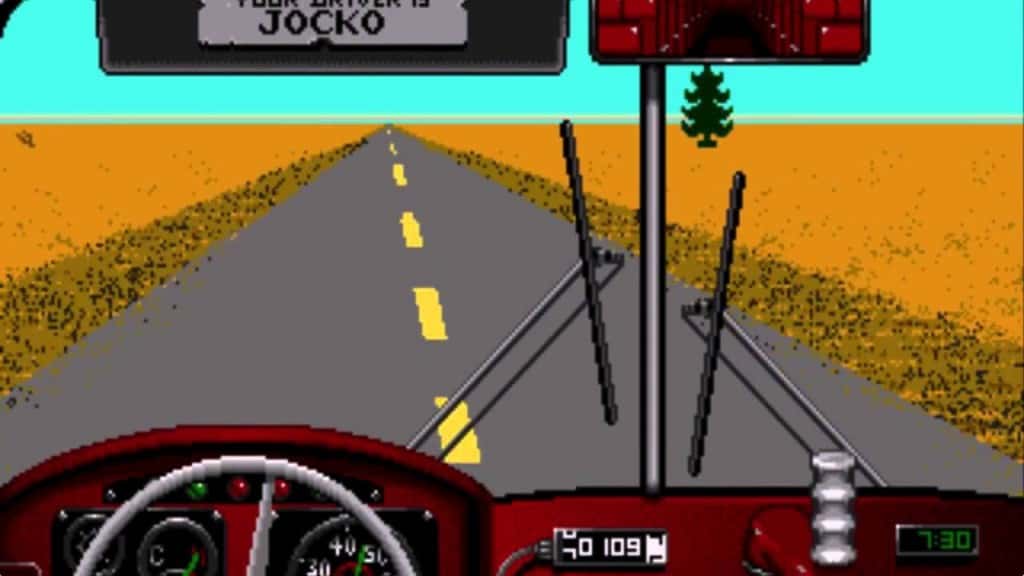 Penn & Teller’s Smoke and Mirrors was a collection put out by the magicians that included several small games. Most of them were relatively normal fun little activities but one of them has become infamous. Known as Desert Bus, it had a very simple goal – the player just had to drive a bus from Arizona to Las Vegas. The only hitch was the fact that the distance between the two locations and the speed of the bus were genuine, meaning it took eight full hours to complete. Without any pause button, players would have to sit for the full time to ensure the bus does not crash or go off the road. 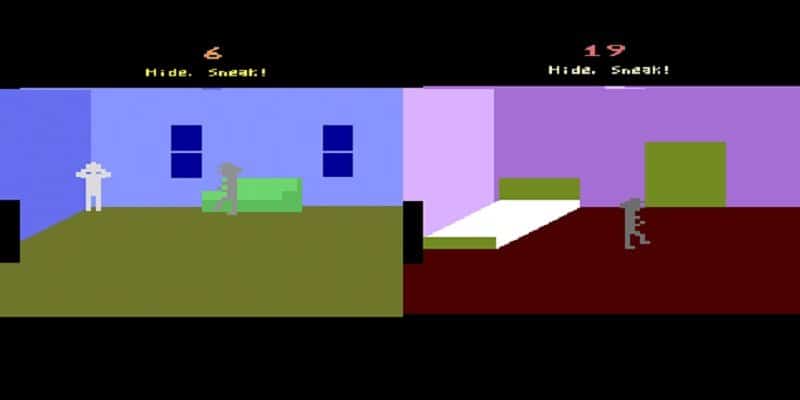 Taking real world activities and translating them into video games is something that has happened since the very beginning of the industry. Just look at games like Pong, FIFA, Monopoly, Risk and Pro Bass Fishing. One game though took a real life game that was almost impossible to replicate, as Sneak n Peak was a hide and seek simulator. Apart from the clunky gameplay and horrendous graphics that made playing the title a tortuous experience, the idea of playing hide and seek in a video game in the first place is all kinds of weird. 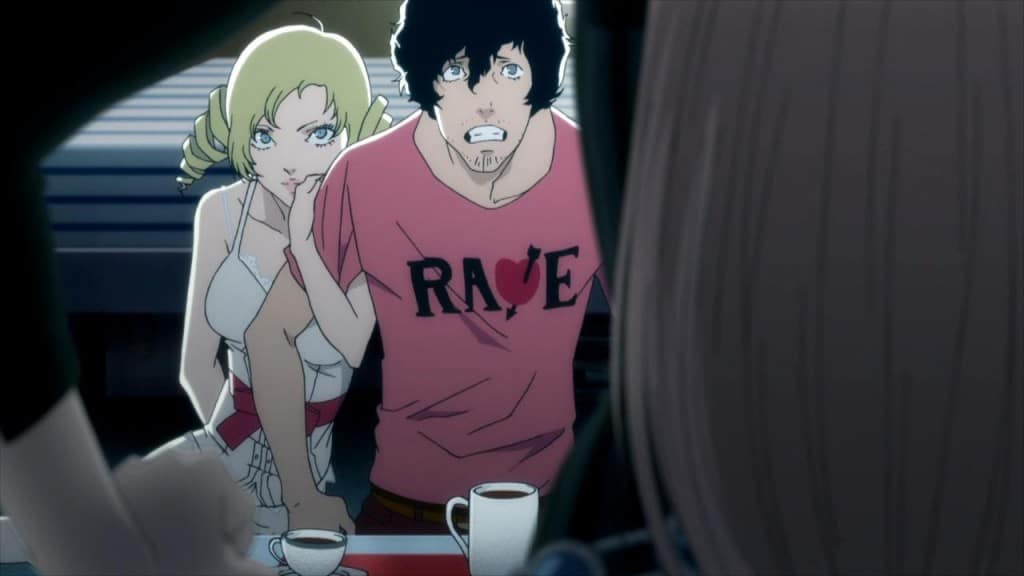 Catherine is a cult game that has achieved notoriety for being odd. The relationship manager and dating sim tasks players with choosing the actions of the main character as he embarks on an affair with Catherine after his girlfriend, Katherine, decides that their relationship should be getting more serious. Just to add to the overall strangeness of the experience, the second element of the game is a hugely complicated puzzle mechanic that is about as different to the rest of the game as you could possibly imagine. 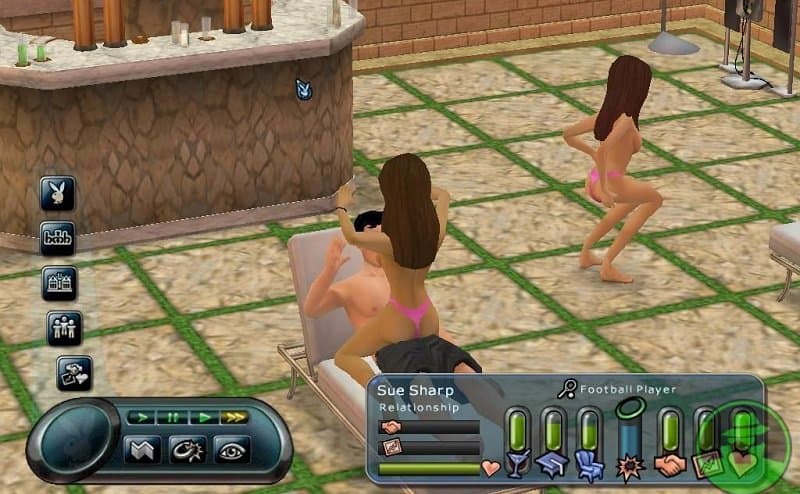 There’s nothing odd about simulation games. In fact, they are some of the most popular types of genres available, with titles such as The Sims, Rollercoaster Tycoon and Flight Simulator selling hundreds of millions of copies. One entry in the genre did raise some eyebrows though and that game was Playboy: The Mansion. It involved building your own Playboy Mansion, getting content for the magazine and managing the relationships of the models and business partners. While it had plenty of sexual references, it failed to have any sort of nudity and so put off most of its fanbase. 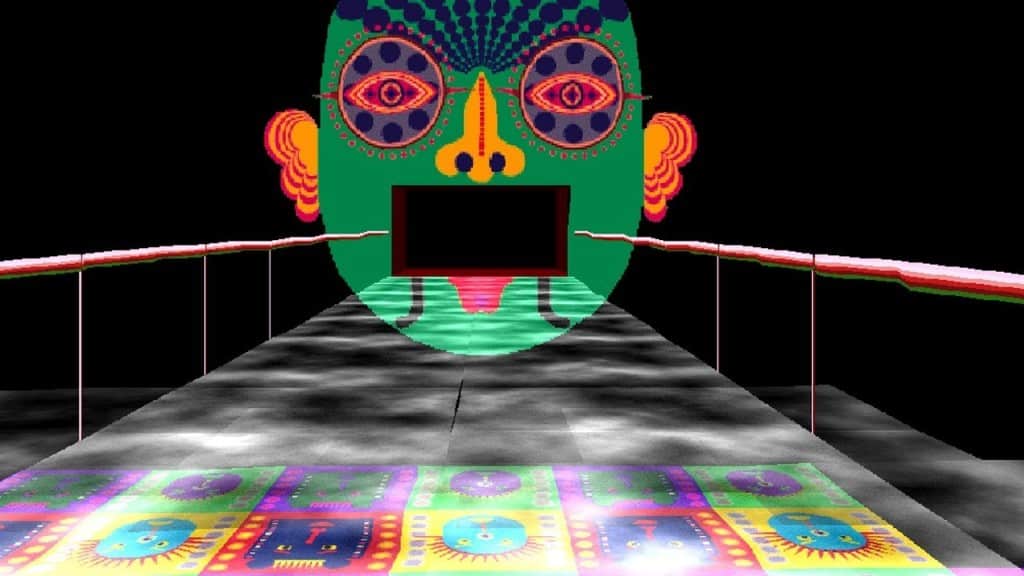 Based on the 10-year dream journal of one of the developers who worked on the game, LSD: Dream Emulator is a first-person adventure and exploration title. Players must explore their dream-like surroundings, investigating the areas and transporting to surreal worlds, though there is not actual goal or objective. After spending 10 minutes in one of the disturbing, traumatic or simply psychedelic dreams, you are sent back to the main menu to enter into another one. 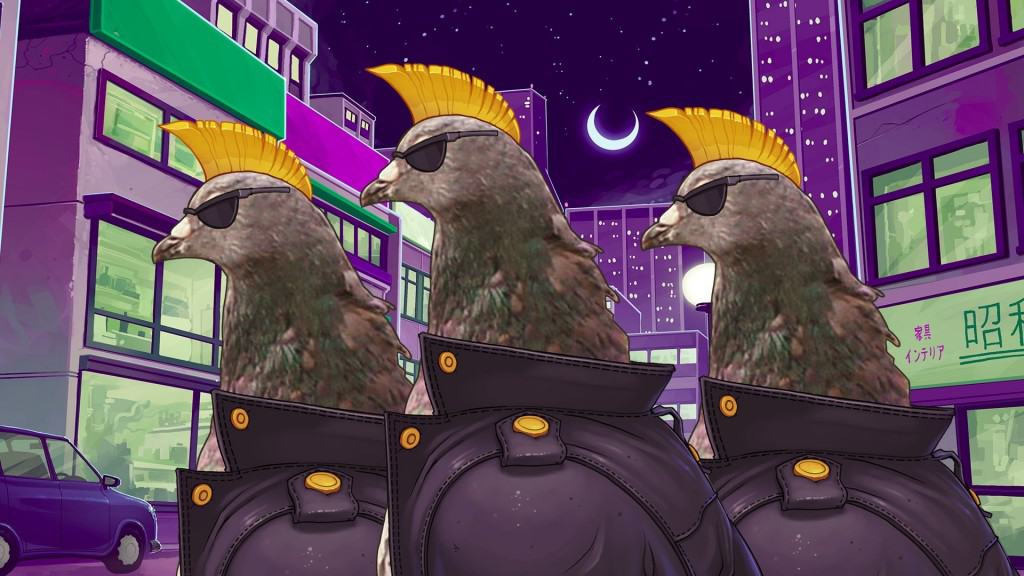 Another dating similar that originated in Japan, Hatoful Boyfriend doesn’t just follow the creepy and downright odd conventions of other titles in the genre. It actually goes much further and proves that developers can still come up with even crazier concepts to make into fully-fledged games. In Hatoful Boyfriend, the player controls a girl who goes to a school full of birds with the sole aim of romancing one of the animals by the end of the school year. 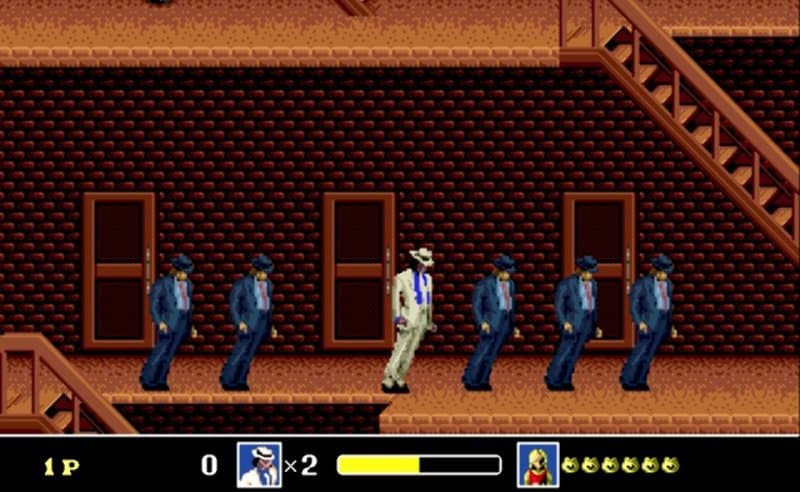 As you might have guessed, Michael Jackson’s Moonwalker is a video game focused on the infamous singer, based mostly on the short film of the same name. It was essentially just a standard beat ’em up, with the player controlling Michael as he defeats enemies using his incredible dance moves and attempts to rescue children who are hiding from the bad guys. It even had a special attack that would cause all of the on-screen baddies to break out into a dance number. 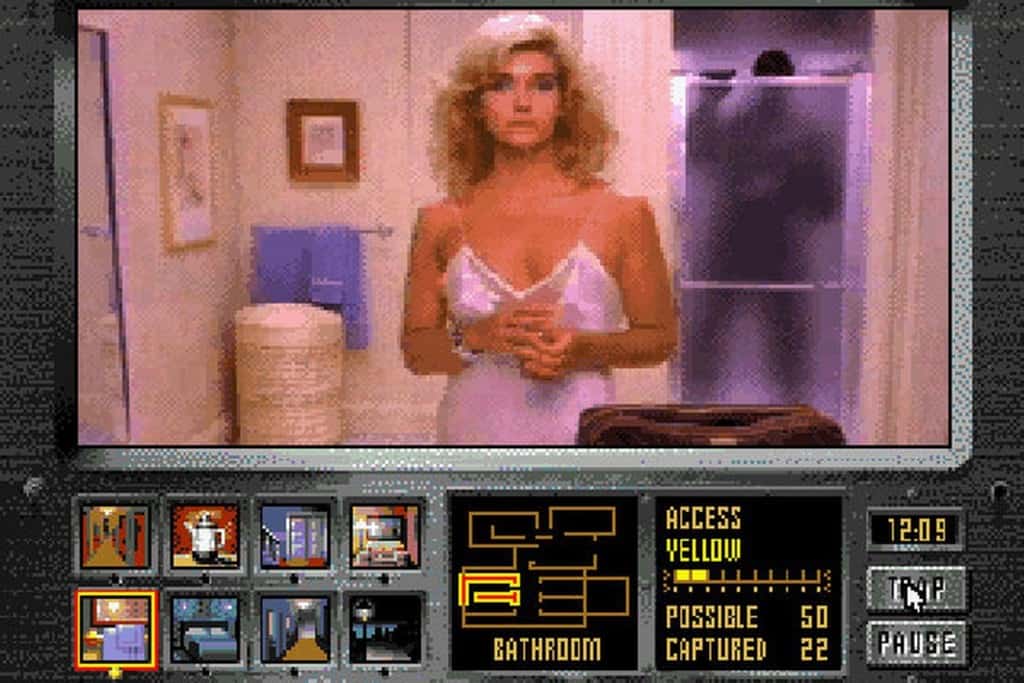 Perhaps one of the most poorly thought out games ever made, Night Trap is best described as an interactive movie title. You play as a member of the Special Control Attack Team and must spy on a group of young girls who are having a slumber party in search of gruesome vampires who are trying to kill them. The controversial voyeurism experience is made all the worse as the developers used real video of actual actors to film the footage that you watch over. 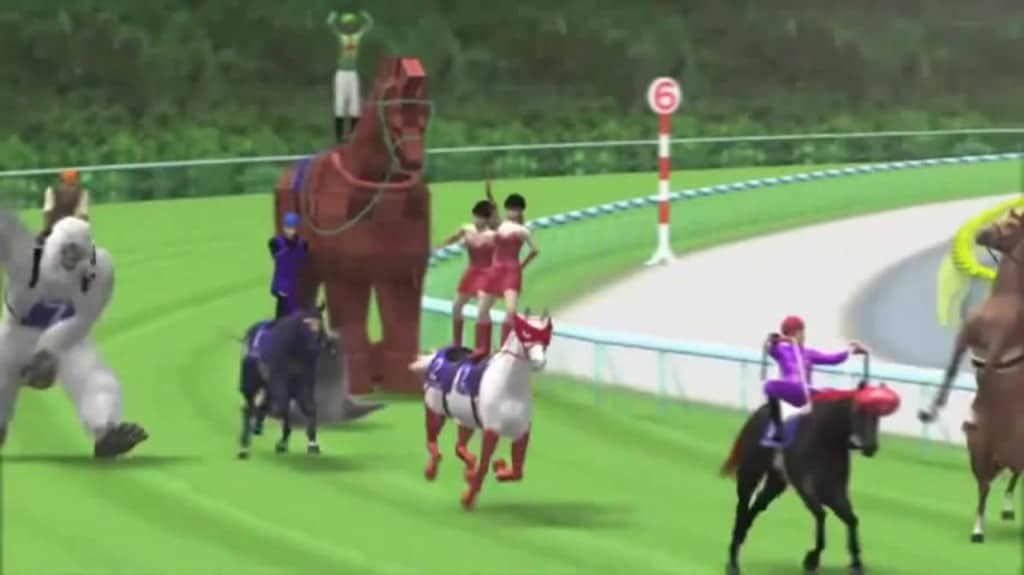 Despite the name World Cup suggesting that this game might be a soccer title, Japan World Cup 3 is actually a horse racing and betting simulator. That all sounds pretty innocuous and to be fair, the game looks normal until you start to play it. Once a race has loaded you see that the horses are not all standard horses, some have extra long bodies to accommodate extra riders while some stand on their hind legs. Where it really gets bizarre though is when other racers are introduced, ranging from robots, yetis, elephants pretending to be giraffes, and even giant wooden Trojan horses.