Round our way, street art isn’t usually much more than a crudely drawn penis on the back of some bins, so it’s always a refreshing change of pace when we see genuinely incredible art out there on the streets. Some artists are so talented that they can create images that seem to pop out of the very ground they’re drawn on, and beg passers by to interact with them. Here are some really great examples of 3D street art. 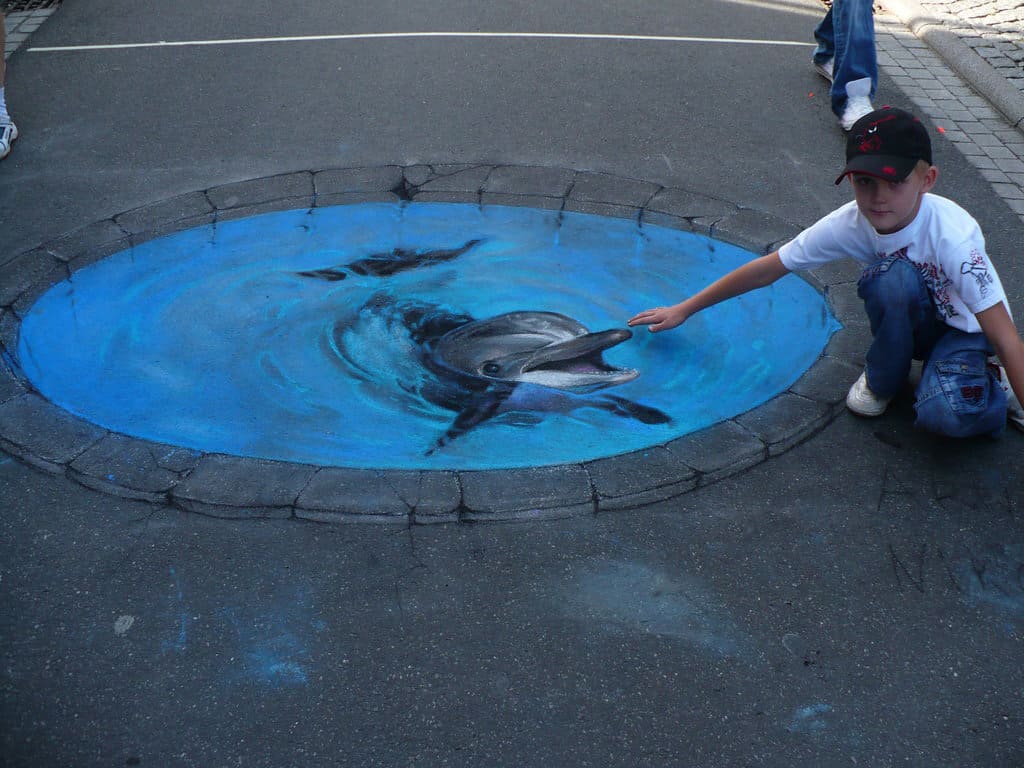 That kid doesn’t looked too convinced, but we’re pretty amazed that dolphin isn’t about to nip his hand and splash around happily, it looks so convincing! 3D street art is gaining a huge amount of popularity these days. Notable brands are already taking advantage of public’s curiosity on 3D street paintings to create awareness for their products. (Which you’ll see later in the post). 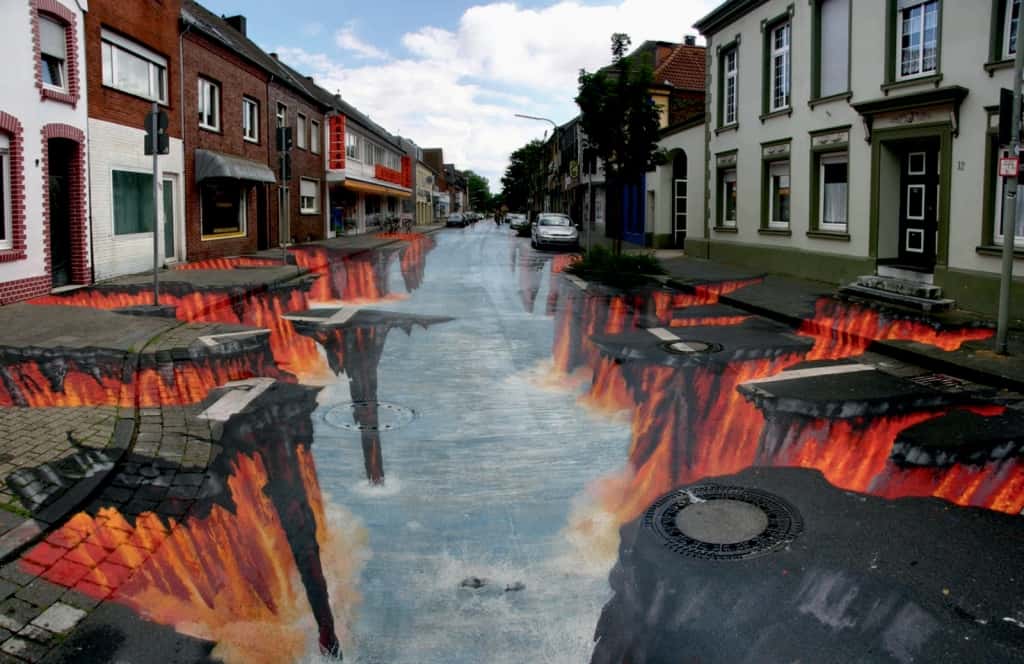 We can only imagine that waking up bleary eyed and barely aware of what’s going on around you to this scene would be quite a lot to take in. This one is called Hot River, and as you can see, pretty much the entire street was used to create this dream-like piece of surrealism. We particularly like the way they’ve managed to create a real Earth cracking effect. Mind where you park, now. 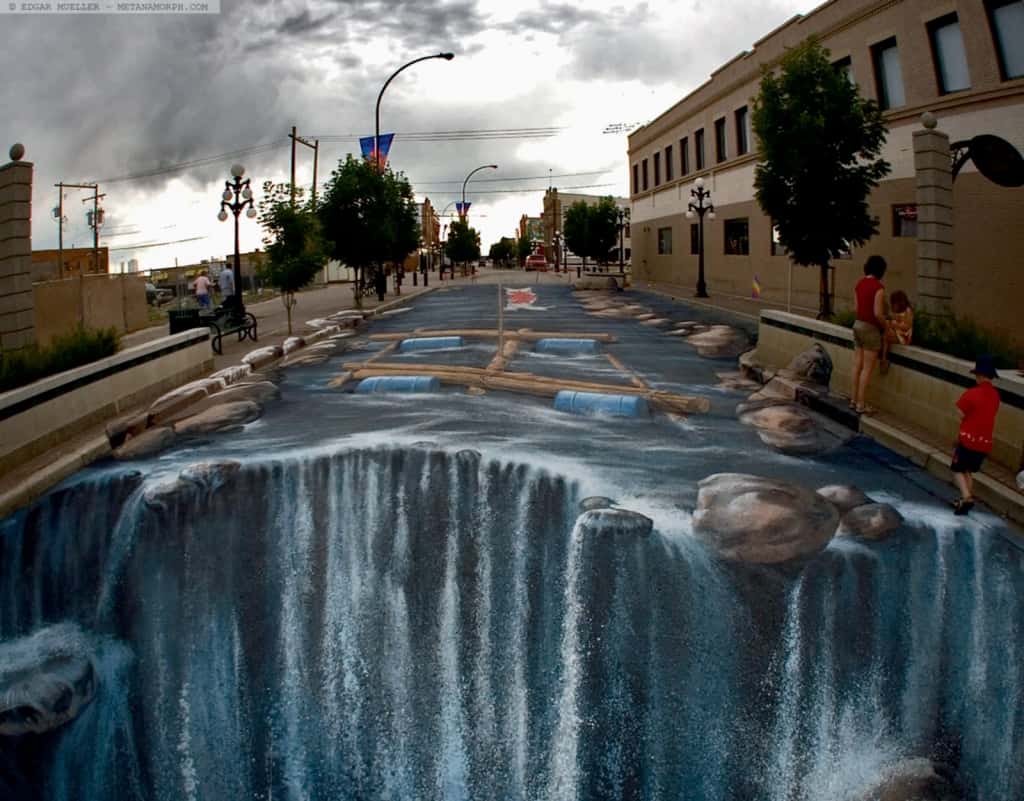 Can anyone spot Kevin Costner anywhere? If you haven’t seen Waterworld, ignore that reference, then go and watch Waterworld and come back here. You’ll appreciate the reference then. What you won’t appreciate is the fact that we’ve just made you watch a crap movie with Kevin Costner. Anyway, check out that kid in the red shirt on the right walking on the water. Jesus? Oh yeah, it’s not actually real water. Our bad. 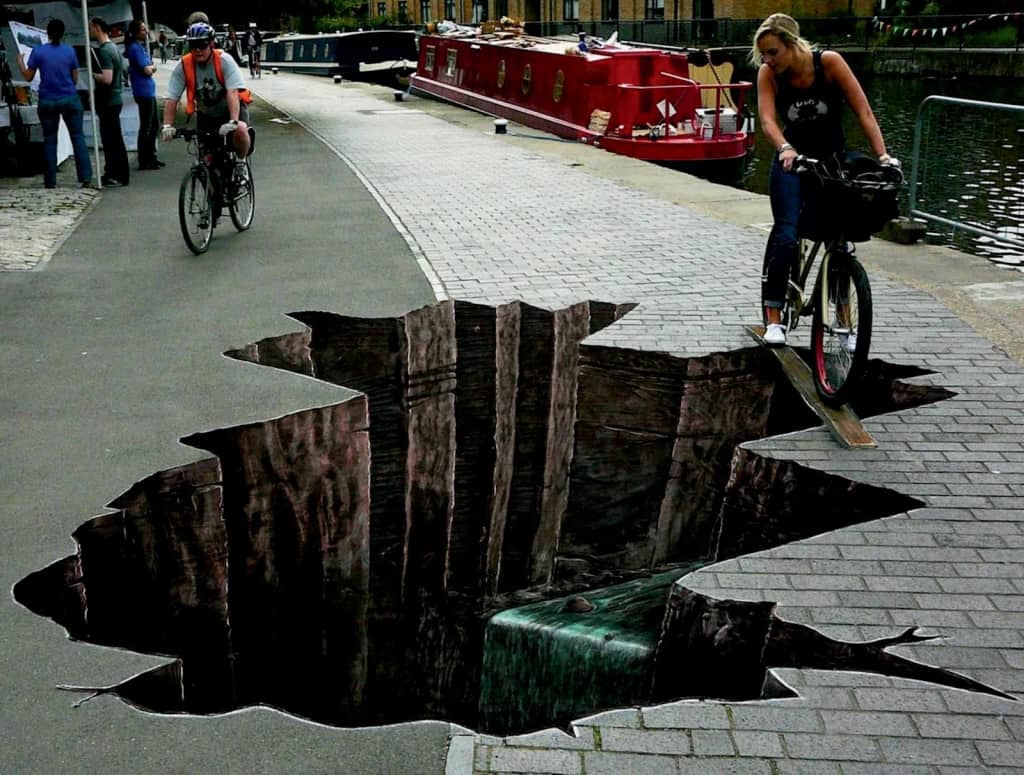 The council really need to sort out this glaring hole in the middle of town… anyone could fall down it. Luckily, that clever cyclist has chosen to ride across the abyss using the provided plank. Much safer. Of course, it would have been safer still if she had had the foresight to just ride around the vast unending chasm of death, but we suppose you have to commit to these things or there’s no point. 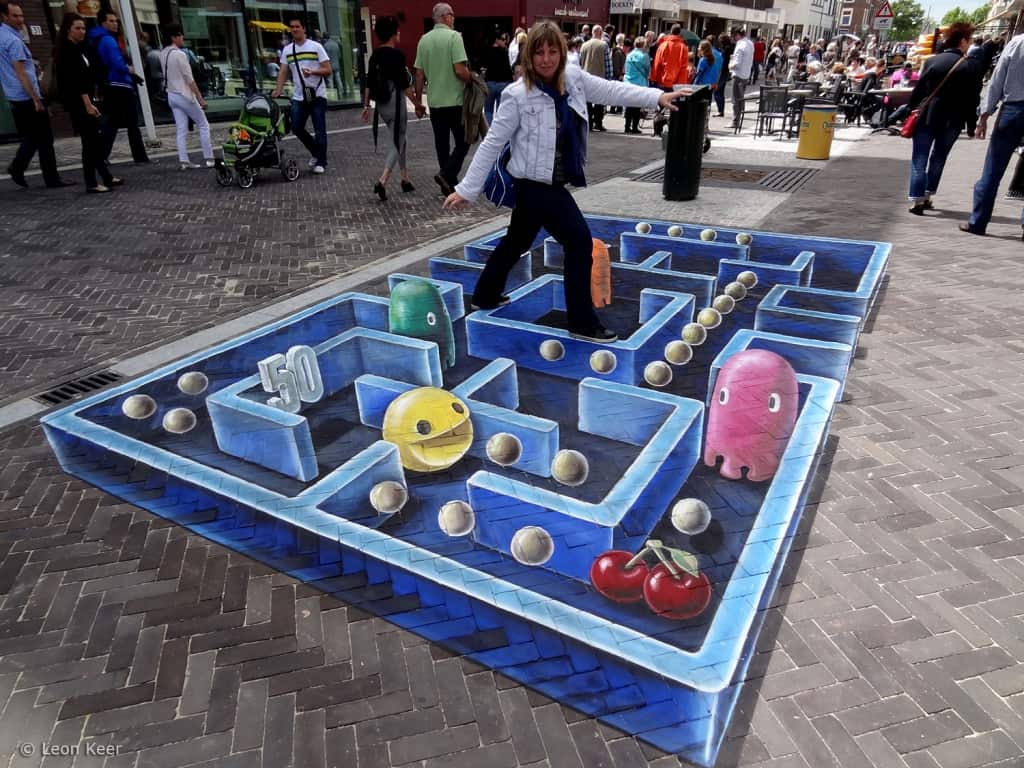 This woman is living everyone’s dream of playing a real life game of Pac-Man. Get the cherry, obviously. Fun fact while we’re on the subject of Pac-Man; His name was originally Puc-Man, but this was changed because people thought the name would be too easy to vandalize in a crude manner. Of course, you could have easily turned the P into an F to make…. well, we don’t need to spell it out for you, do we? 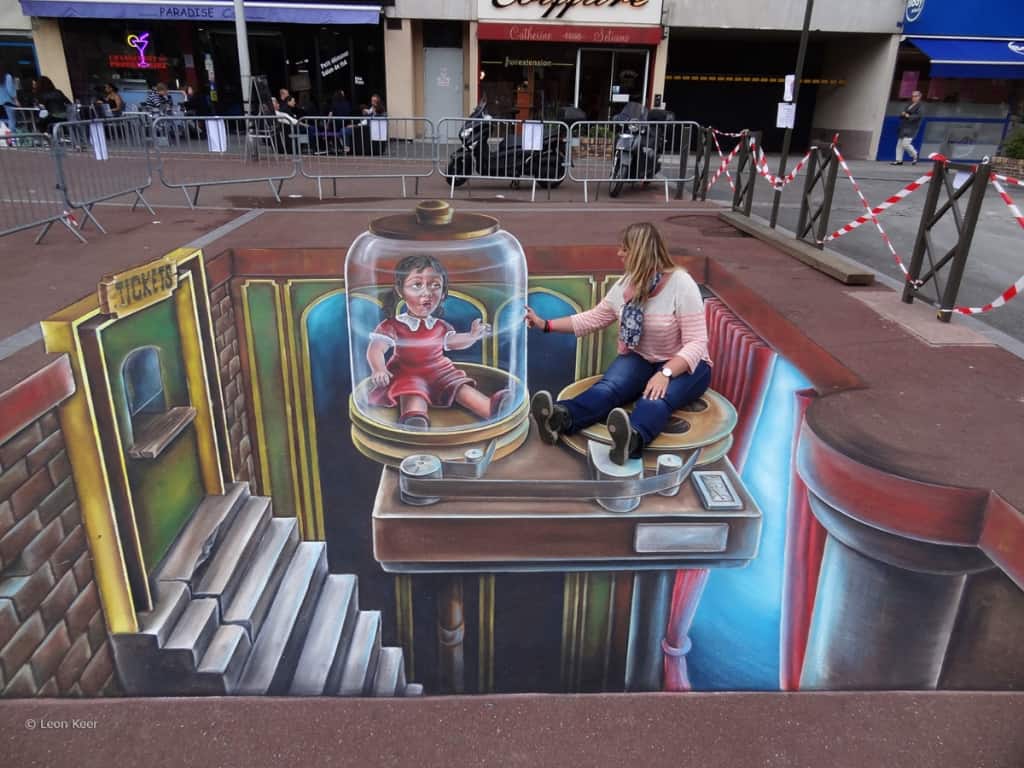 We have no idea what’s going on here, but it’s as cool as it is bizarre.It’s a nice touch, putting the barricades all around the piece to give it a more realistic feeling. Obviously, that woman just wanted to touch the weird doll girl thing, so she disobeyed the rules. There’s also a ticket booth, and some sinister looking stairs. What does it all mean? Where do the stairs lead? Why is the doll in the glass case? We’re feeling a little unsettled, so we’re gonna move on now. 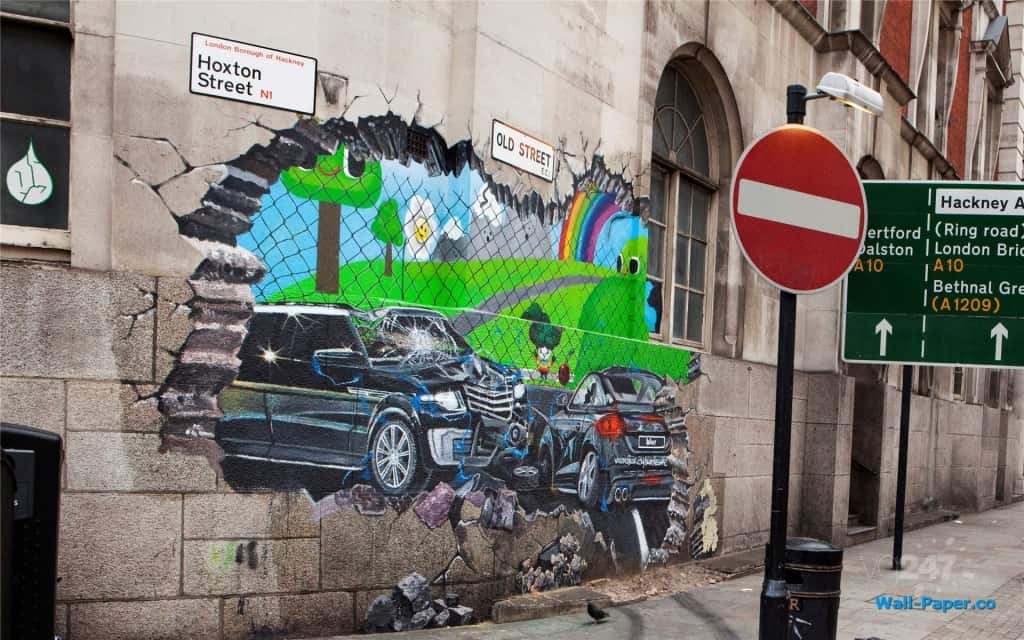 Wherever Roadrunner goes with his cartoon walls, destruction is sure to follow. That monster. It’s one thing to trick Wiley Coyote with your trick tunnels and secret passages, that’s just self defense… but when innocent people are caught in the cartoon crossfire, it’s time to stop. What will we tell their poor families? (Besides “meep meep”, obviously). We can’t help but wonder how many disappointed little kids saw this and ran full pelt at the wall, thinking they’d found a magical cartoon portal. Street artists are unwittingly cruel people. 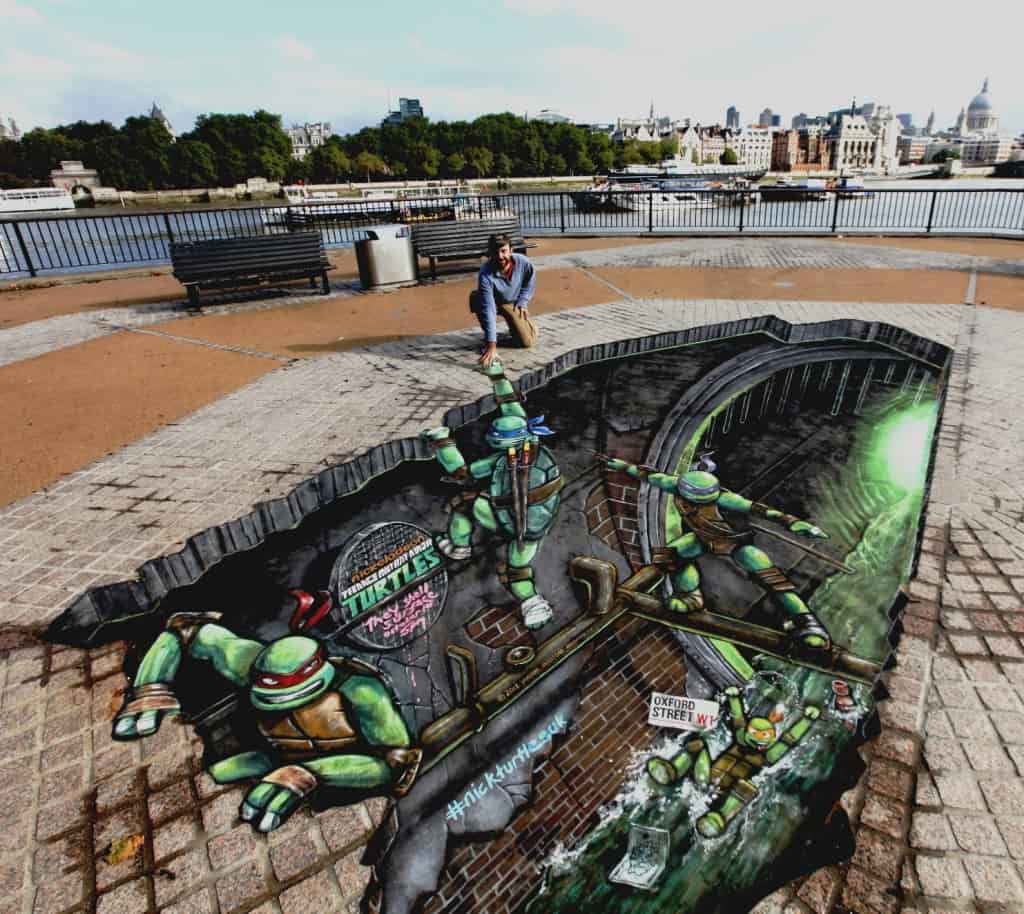 Oh look, the real Teenage Mutant Ninja Turtles are coming to get Michael Bay for that awful film. Maybe the Transformers are on their way too, and they can create some kind of 80’s cartoon super hero super group, intent on destroying Bay for his over the top, bloated, extended toy advert excuses for action movies that desecrate cherished childhood memories in favor of a quick (few million) bucks? Or maybe we just have a few issues we need to work through with Michael Bay as a director… probably the latter. 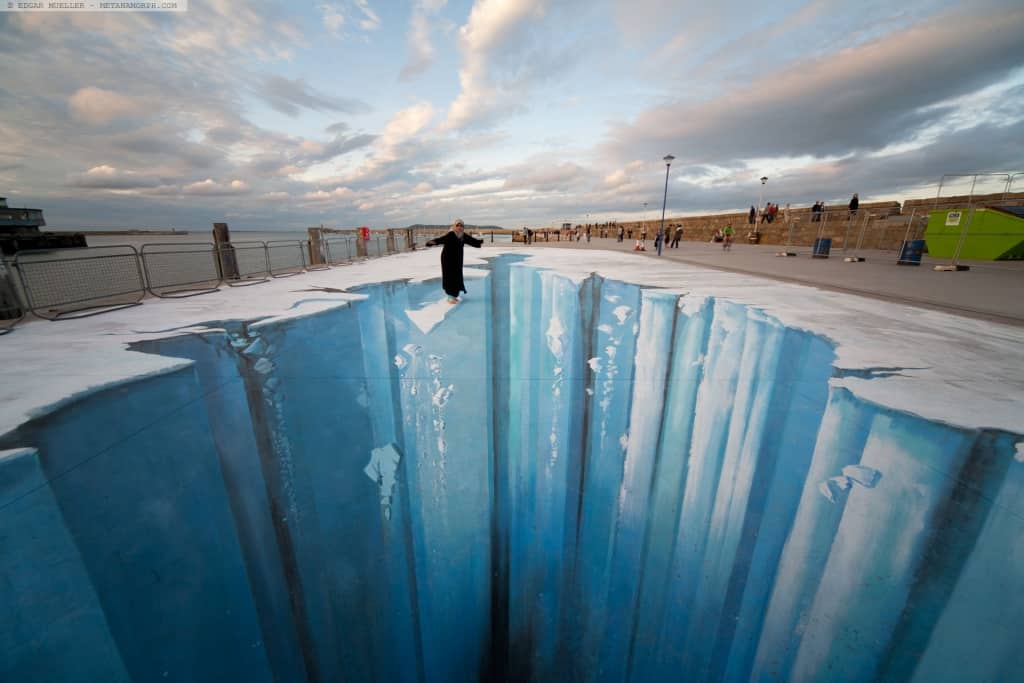 This one is called Ice Abyss. We’re sure you can work out why that might be. If not, we’ll wait till you’ve worked it out before we continue. Done? Awesome. Considering this piece has used nearly an entire street, we’re guessing it took the one guy who worked on it quite a long time to finish. It must really suck to know that work that took this much effort will be washed away within a week or so… but then again, look at the joy it brings people who like to take clever perspective photos. Bless her… you’d believe she was about to fall to her death if she didn’t look so happy. 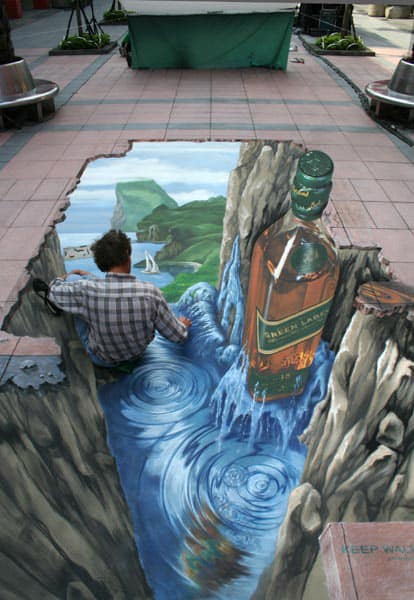 This guy’s managed to find his own little home away from home. We particularly like how the booze really pops out of the ground, and the idyllic little island scene below him seems to go on forever. The level of depth in this piece is beyond impressive. You feel like you could dive straight down into the sea below. We mean, you’d be quickly disappointed when your head whacked on the concrete, but it’s nice to dream. 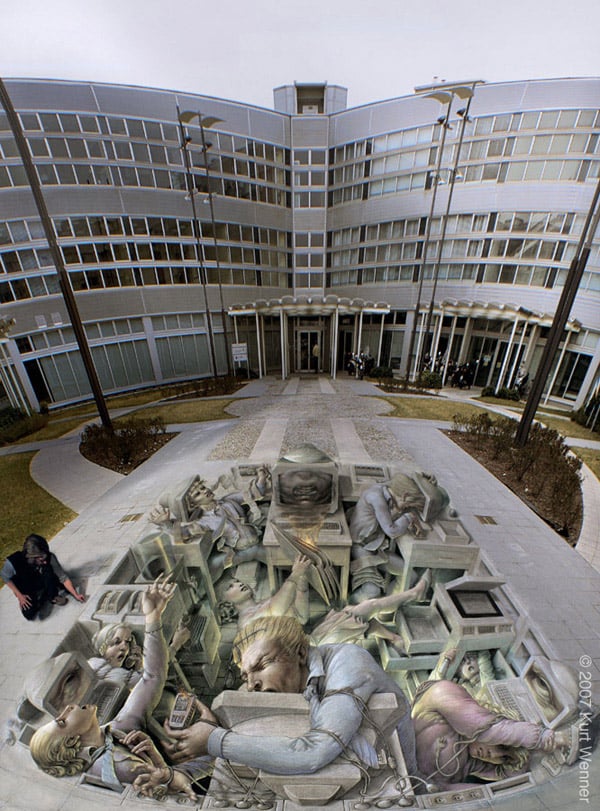 Apparently this piece represents the daily life of a typical office, and all the chaos and stress that brings. We’re not really very skilled on matters of analyzing art, but we can totally see that. People holding burning folders, eyes and mouths staring and shouting through computer screens, everyone caught in a tangle of wires and papers… the only thing it’s missing is Steve Carrell parading round and making everyone feel thoroughly uncomfortable with his bad jokes. 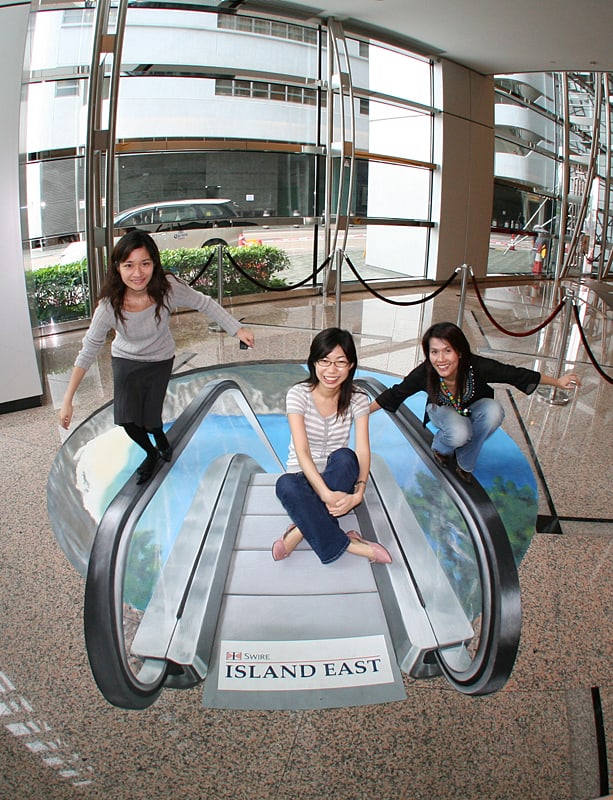 This one might not be the grandest work of street art in terms of scale or ambition, but you can’t deny that it’s certainly one of the most realistic by far. When we first glanced at it we weren’t going to use it because we thought it was just a picture of some girls on a real elevator. Nothing very “Street Art” about that. But of course, it is nothing more than a brilliantly detailed painting that pops out of the floor and comes to life before your very eyes. 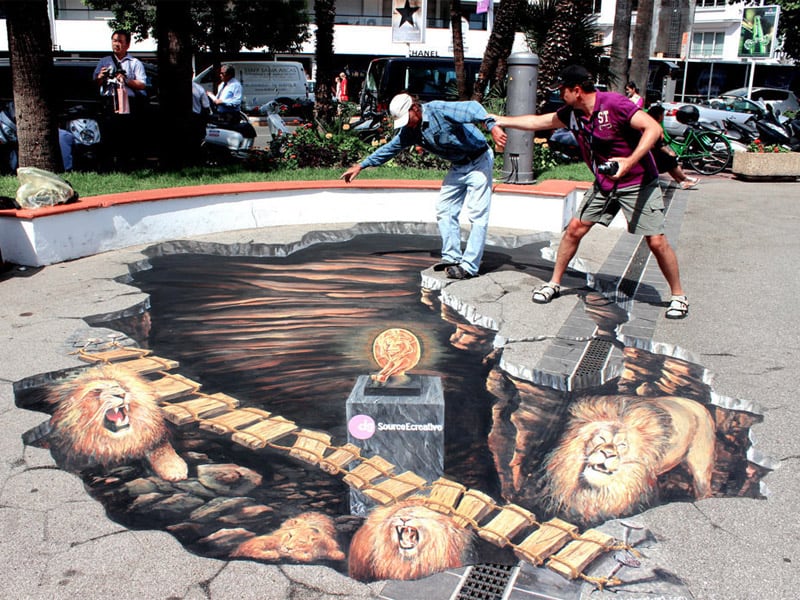 If we told you that this was actually nothing more than a painting, would you think we were lion? Sorry… we’ve been sitting on that awful pun for ages, but it’s over now. Yep, as you can see, this image depicts some kind of creepy lion pit, and two very stupid people that have chosen to stand in the worst place possible rather than take the bridge provided. Or again, just walk around… but we guess that defeats the object. Maybe they’re trying to get that golden orb in the middle? If only we knew what on Earth that was meant to be…

Mind Where you Park 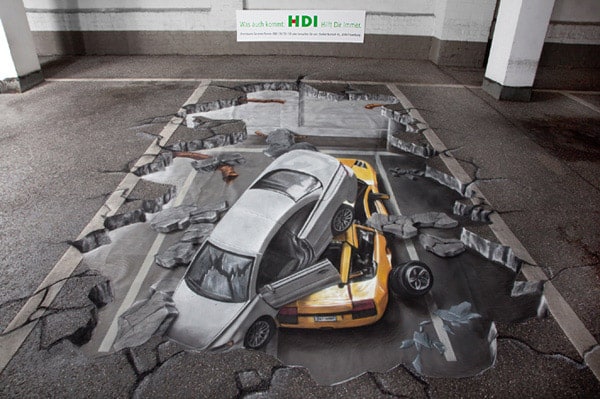 Has Roadrunner been at it again? All we can say about this one, is that if you spot a hole in the ground, even if it might look remotely fake… do not, we repeat do NOT try to park there. You can’t be too careful these days, and we don’t think even of their insurance policies cover “fell through cartoon hole”. Unless they’re represented by Looney Tunes or something, but we sincerely doubt that. 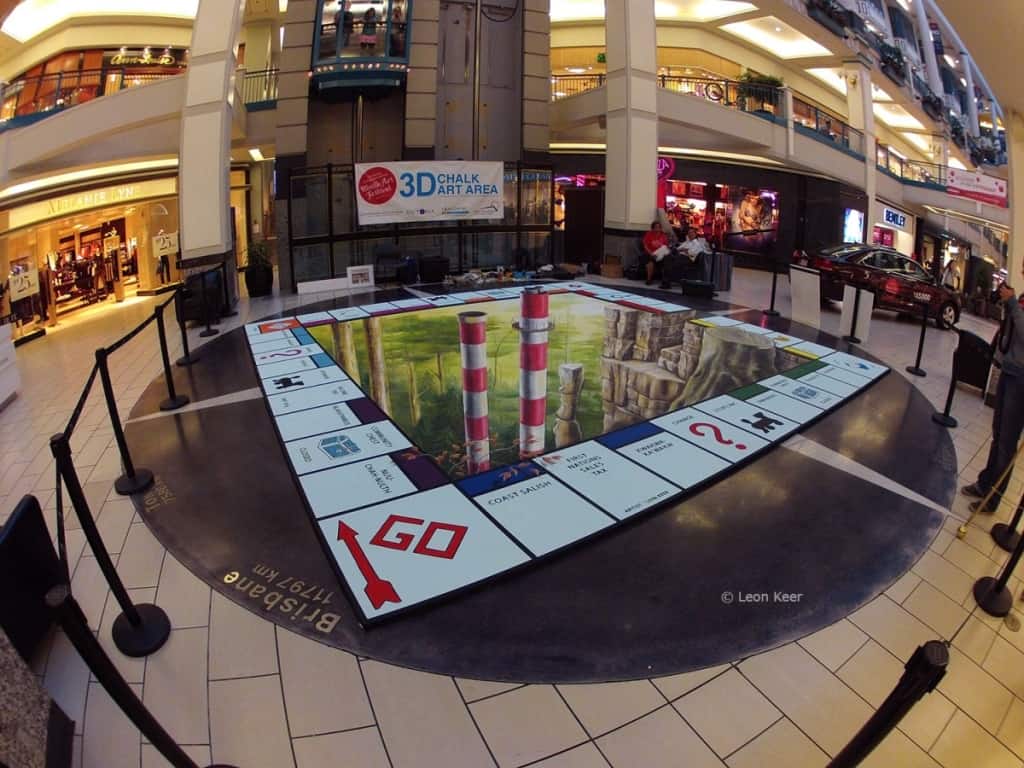 We’re not really sure what’s going on with this one, besides the fact it looks really, really awesome. Is it meant to be an advert for the popular and beloved tycoon board game Monopoly, or do the trees and forests in the middle of the board represent the way capitalist society has monopolized nature? If it’s not the second, it should be. That’s some pretty deep analysis right there from us, and we’re now feeling pretty proud of ourselves.