15 Of The Best Groupon Replies About The Banana Bunker

On April 1st, 2015, Groupon reminded the world that not only are they a reputable company, but that they also employ people with humor. The company announced on their Facebook that the Banana Bunker, an item used to protect bananas while traveling, was back on their website. Fans of the company immediately took notice of the inappropriate shape of the object and a Groupon employee wittingly took charge in the best April Fools troll yet.

How It All Began 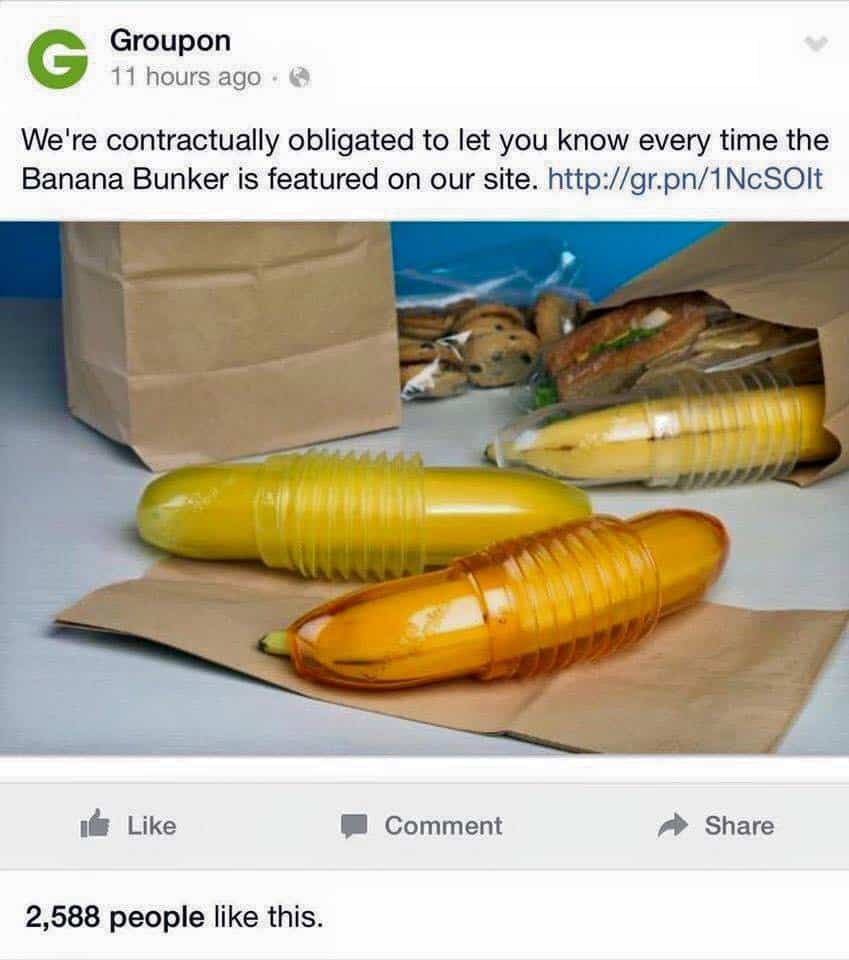 Banana Too Curvy? No Problem! 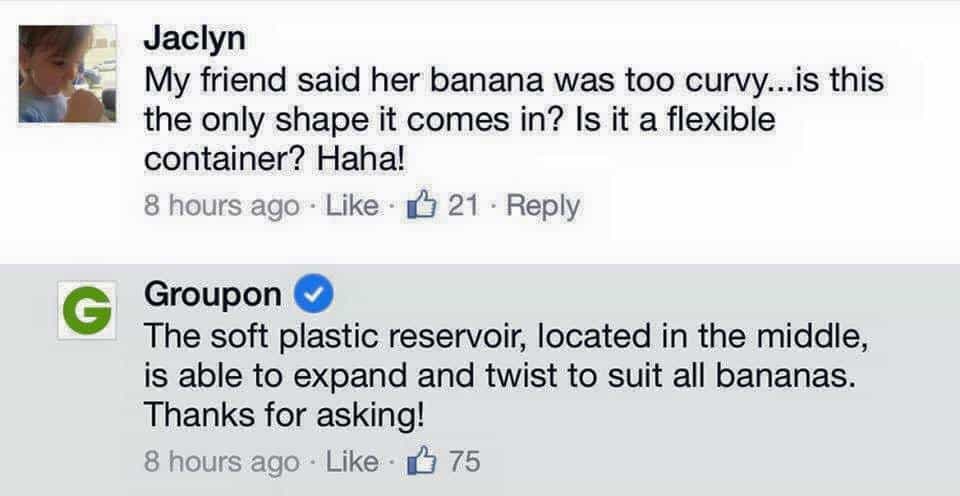 This user asked if all bananas could fit in this container or if it is one size fits all. Groupon was quick to note that the item is flexible to suit every banana’s needs.

But, Is It Effective?

One customer asked about the effective rate of the item. It is very important to know just how much protection the Banana Bunker will offer. Groupon assured them that there was a 99.9% protection rate to ease everyone’s minds.

Worried About What Others Will Think? Don’t Be. 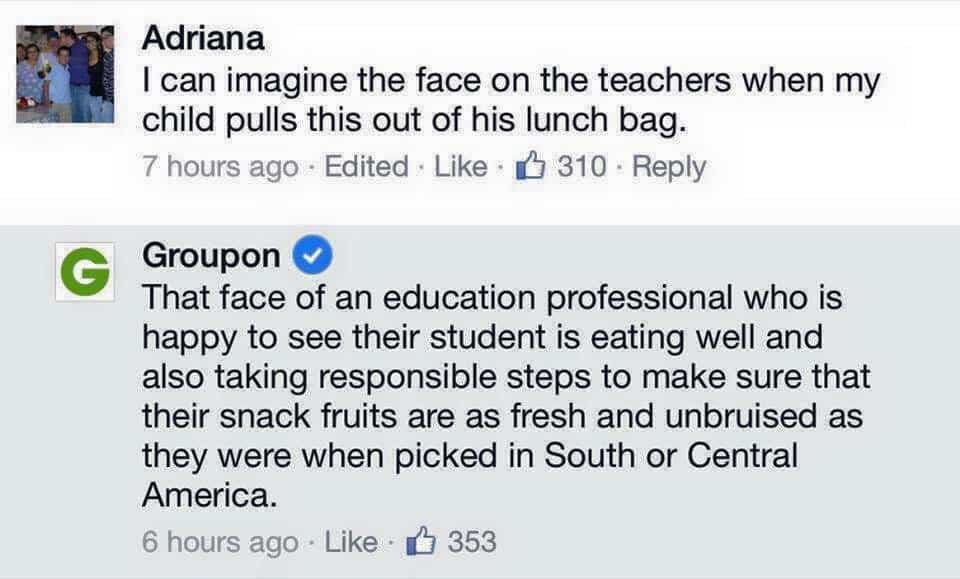 One customer was worried that their child’s teacher might think the Banana Bunker will look silly or inappropriate. The Groupon employee told them that the teacher will only think that the student is very smart for eating healthy and will definitely not think anything otherwise.

This comment was one of the most memorable out of the entire day. Groupon announced that a healthy snack without any bruises is the best thing to give to a friend, and that you can carry this in your pocket.

You Can Fit More In It! 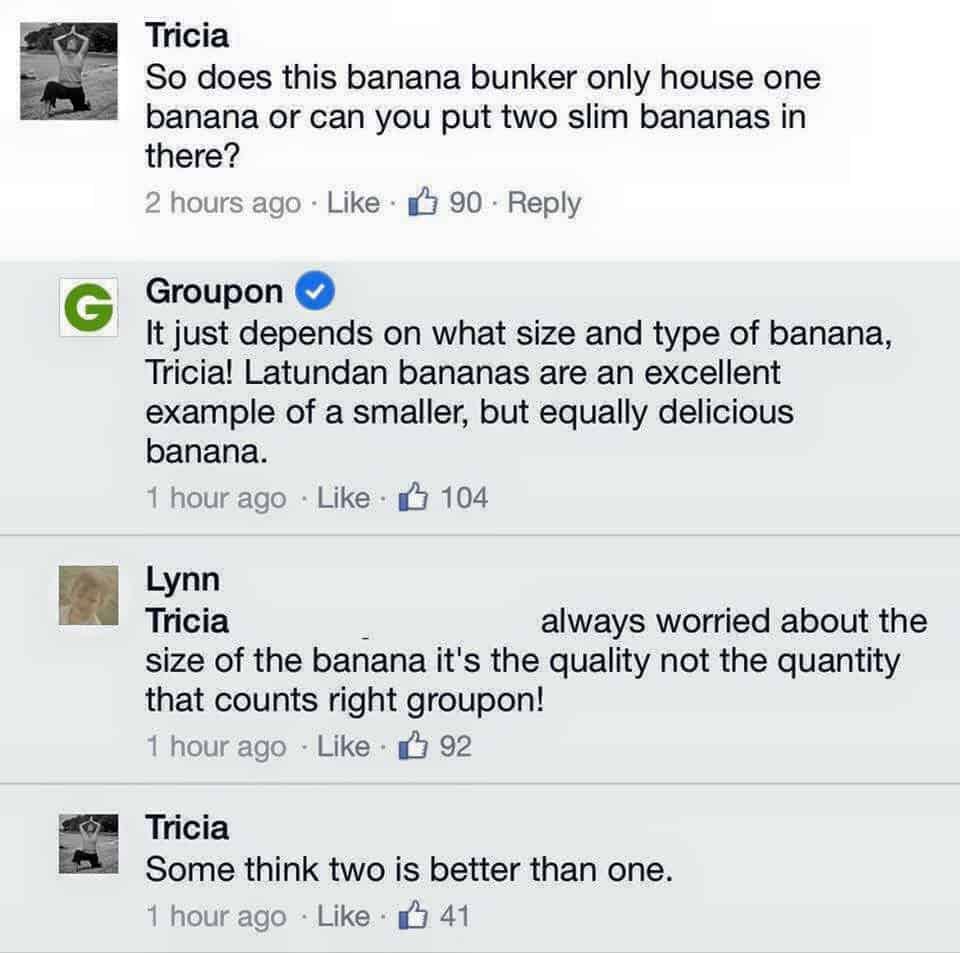 Sometimes, you don’t want one big banana. You would rather have two smaller ones. If that’s you, then rest assured, the Banana Bunker can most likely fit two in there.

Groupon didn’t quite clarify just how to use the item during their announcement. After someone asked if the item was painful to use, Groupon assured them that you do not digest it.

It’s Important To Always Have a Backup

It is important in life to have a backup to just about every situation. Carrying fruit is no exception.

The Anatomy Of A Banana

Groupon got pretty deep with this comment. They explained how bananas are not quite like humans as they cannot feel anything on the same level.

It Can Be Used For Other Things

One user pointed out that this item could be used for different purposes. Groupon agreed and made suggestions for them.

Sometimes, you just need to know what a product tastes like before you buy it. Groupon conducted their own taste test to give the users the answers they need.

The Art Of Being Safe

Groupon showed everyone that it is never too late to start doing anything, especially protecting your fruit from harm.

It’s The Perfect Addition To Your Home

When prompted about what they thought the item looked like, the Groupon employee was quick to reply by saying that it looked like a “sound investment”.

No Banana Is Too Big For The Job

Feeling Weak? Get Some Potassium! 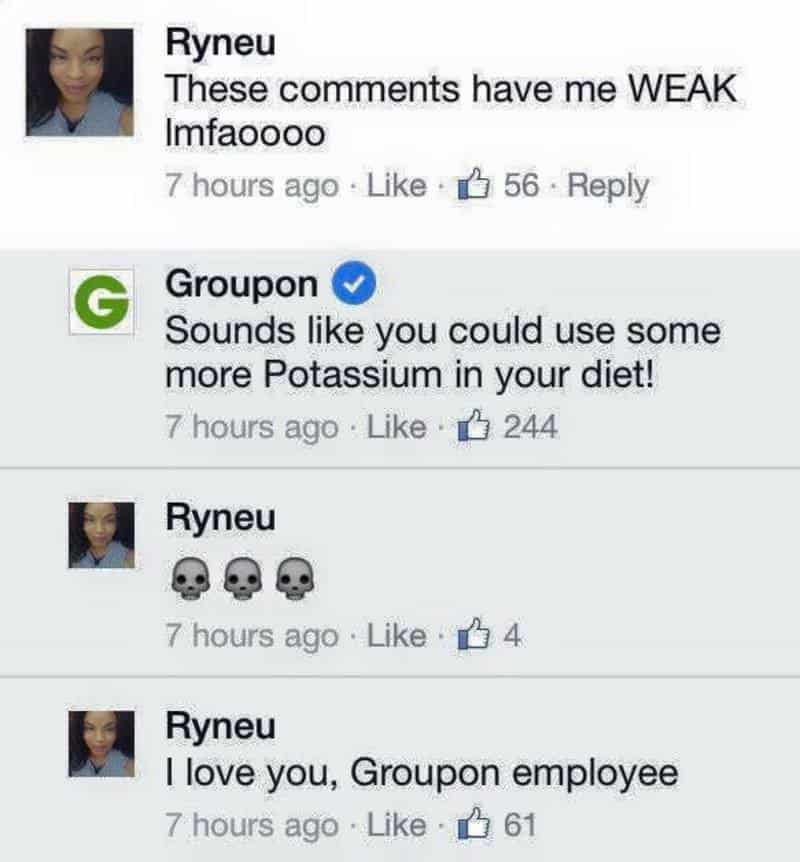 One customer was getting a kick out of reading through the comments, so much so that she informed Groupon they were making her “weak”. Groupon offered up the best solution ever.