Whether destroyed, sold, or mysteriously closed, these amusement parks were left abandoned for years. Now, with decaying attractions, overgrown weeds, and discarded memories, the once magical territories are eerie and desolate.

Some are now used to depict disturbing scenes in films, some are the location for creepy Halloween tours, and some are still sitting there uninhabited. A few of these parks are finally being restored to their former glory, to create lasting memories in a brand new way. Here are some of hauntingly beautiful parks today. 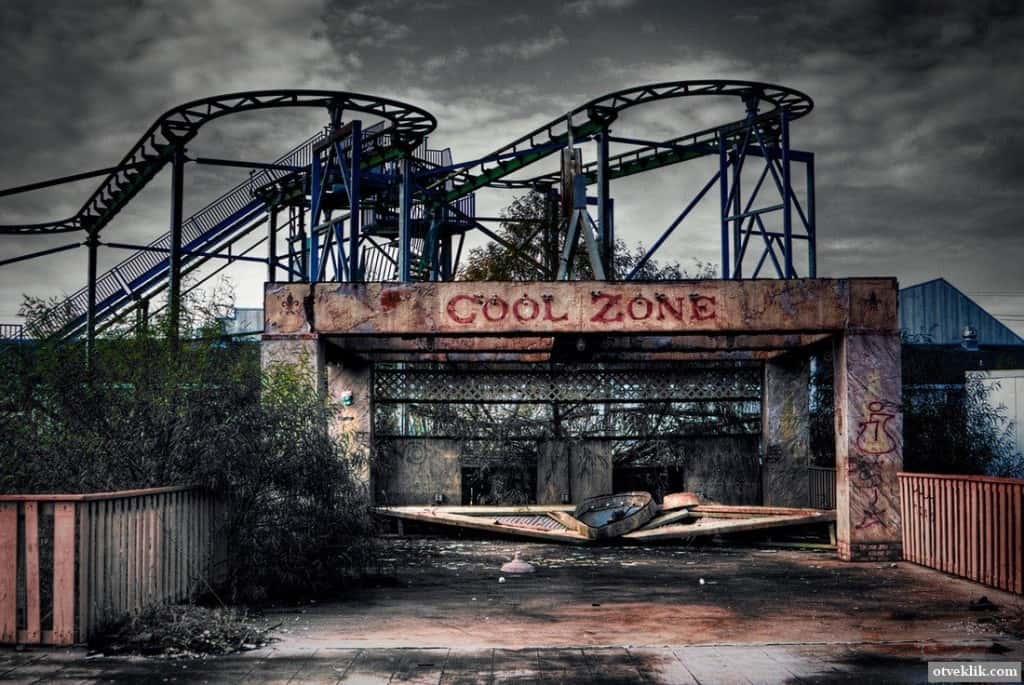 This park first opened under the name Jazzland in 2000 and operated for 2 years before Six Flags changed the name and upgraded it to become “Six Flags New Orleans“. The last day the park operated was August 21, 2005. Hurricane Katrina struck New Orleans the following weekend and the park never opened again due to the massive devastation. Since then, many plans and proposals have been made to refurbish the park grounds and redevelop, but thus far, none have been successful and the remains of the amusement park continue to decay. Over the past few years, the park grounds have served as sets for films such as Percy Jackson: Sea of Monsters, Dawn of the Planet of the Apes, and Jurassic World. 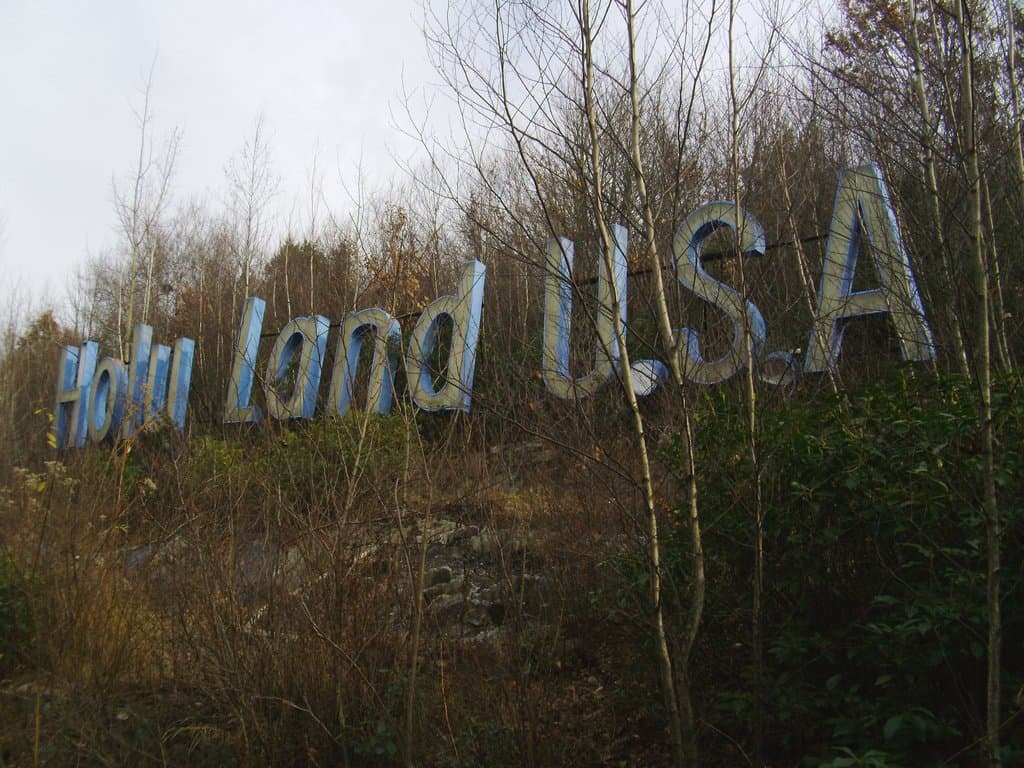 Holy Land USA was a theme park in Connecticut built in 1940 by John Baptist Greco and that was inspired by bible passages. Among the attractions were Jerusalem, Bethlehem, the Garden of Eden, and many more. Greco closed the park in 1984 for improvements and expansions. Unfortunately, he died in 1986 and these improvement were never completed. A group of nuns were given reigns to the park, but over the years it was abandoned and little was done to maintain it. It remained abandoned and decaying up until recently in September 2014, when the mayor decided to open the grounds to the public. Since then, attempts have been made to clean up and restore the park. 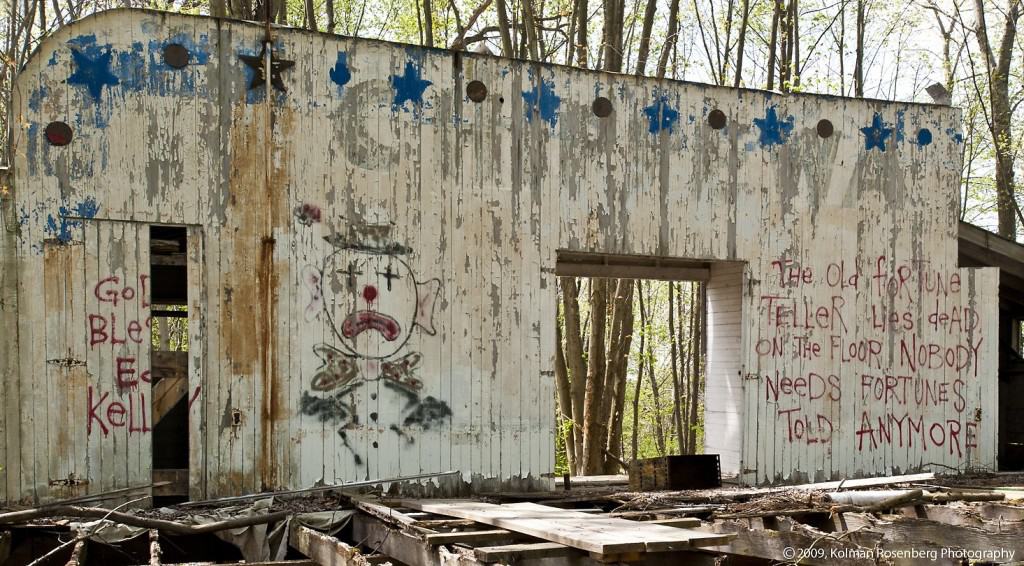 Chippewa Lake Park opened in 1878 and operated for 100 years before closing in 1978 due to low park attendance. The park remained untouched and unmaintained for nearly 30 years. In 2010, rides began being demolished, but some still remain standing, along with other structures. 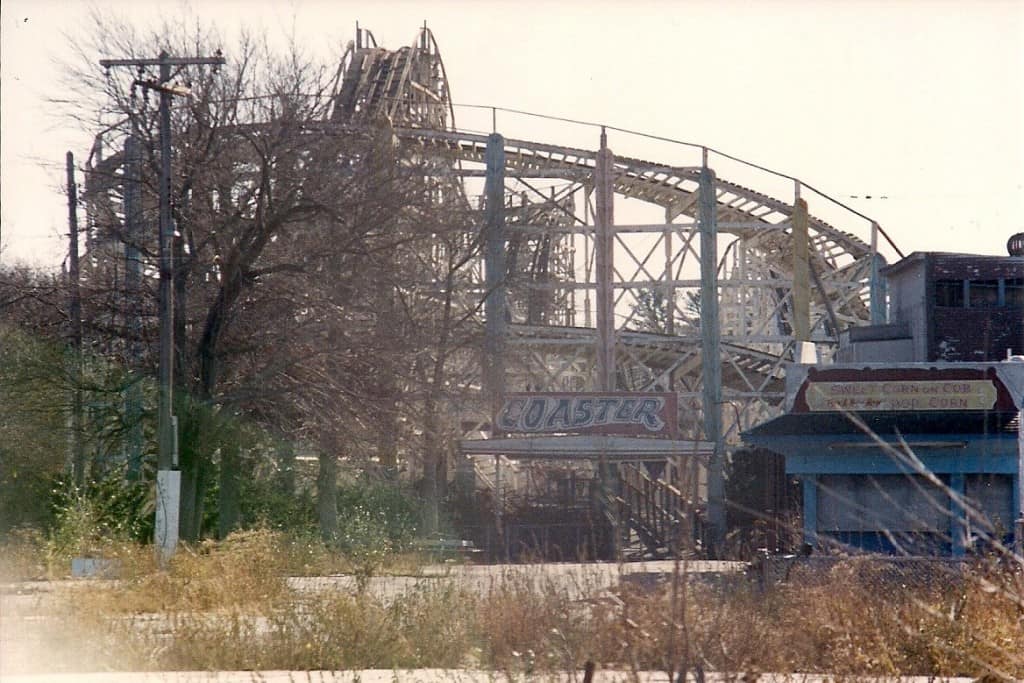 Lincoln Park opened in 1894 as a small 20-acre attraction in Dartmouth, MA. The park continuously grew throughout the years and was beloved to many. In the 80’s, when the owners passed away, the park was sold and for the first time had an admission fee. Many famous rides were auctioned off and the park lost a bit of its charm. The park closed for good in 1987, only a year after the new owner took over. Since then, many rides have been auctioned off and ownership has changed quite a few times. Only few pieces of the original park remain. 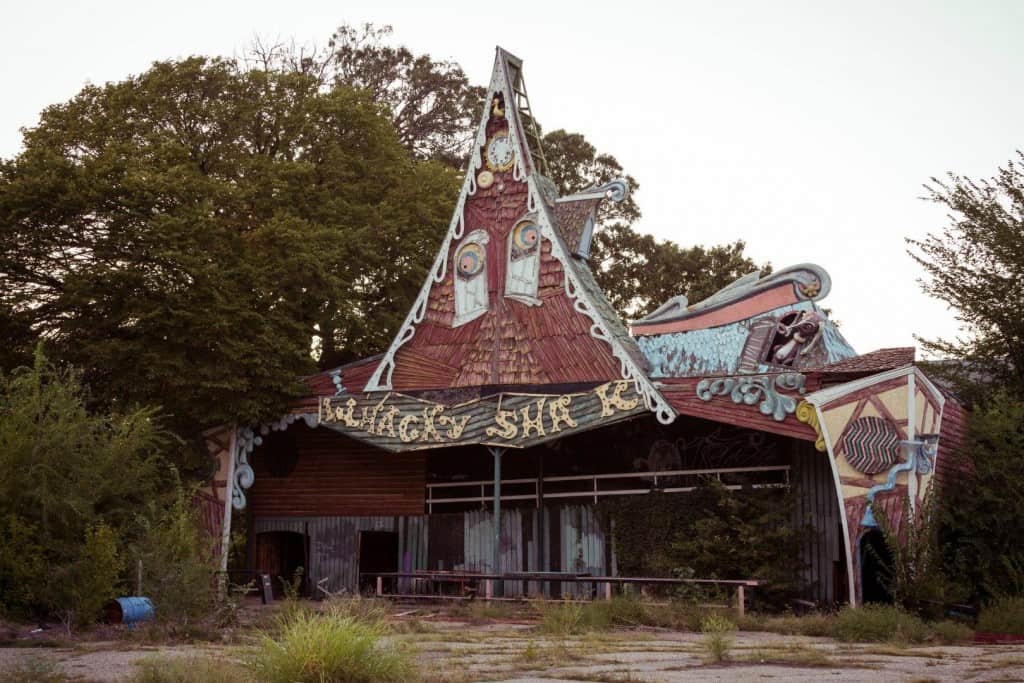 Joyland operated from 1949 until 2004. It reportedly shut down from economical issues and safety concerns. In 2006 restoration were made to some rides, but after financial troubles, the park never reopened. Since its closing, Joyland has been subject to a great deal of vandalism and the owners are sickened by it. Today, the park still stands, but is slowly decaying and remains abandoned. Restorations initiatives have been announced, but it is unclear as to if they will follow through. 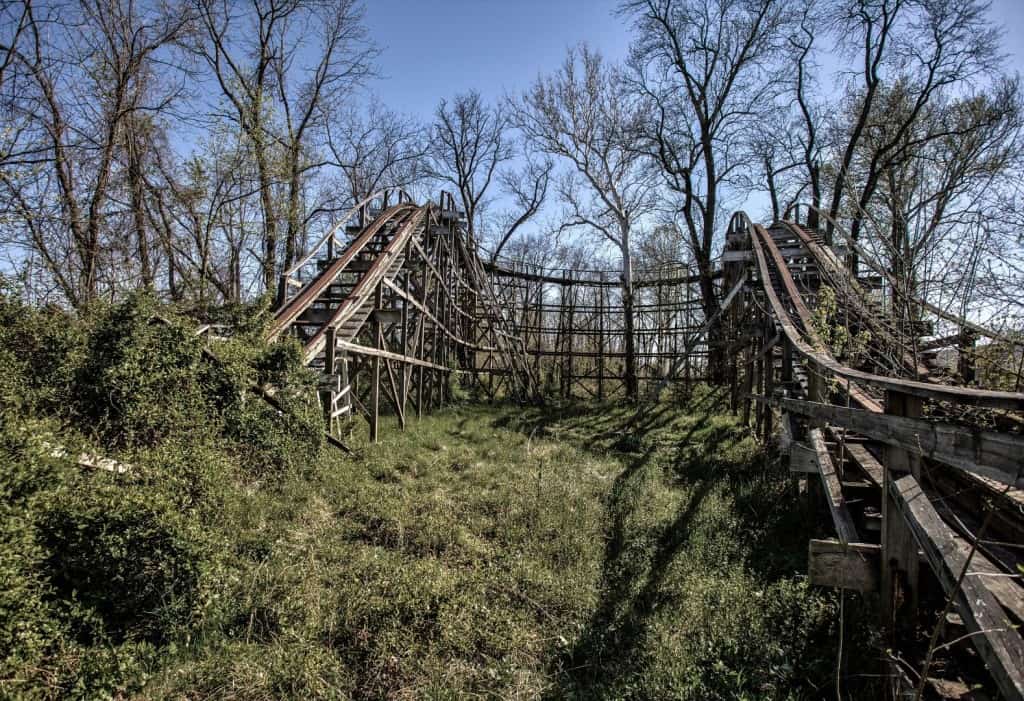 Williams Grove Amusement Park was an amusement park in Williams Grove, PA, that operated from 1850 until 2005. What began as a small grove where the Williams family hosted picnics, eventually grew into an amusement park that operated for close to 90 years. The first rides appeared in the park in 1928, and the adjacent Williams Grove Speedway half-mile track opened in 1938. Morgan Hughes purchased the park in 1972 and it was damaged by Hurricane Agnes the same year. The park was restored and remained in operation until 2005 when the Hughes family decided to close it to focus on the Speedway. Hughes attempted to sell Williams Grove Amusement Park in 2006, but was unable to find a buyer. Many of the rides were auctioned off, but some still remain. The grounds now hosts a weekly flea market. 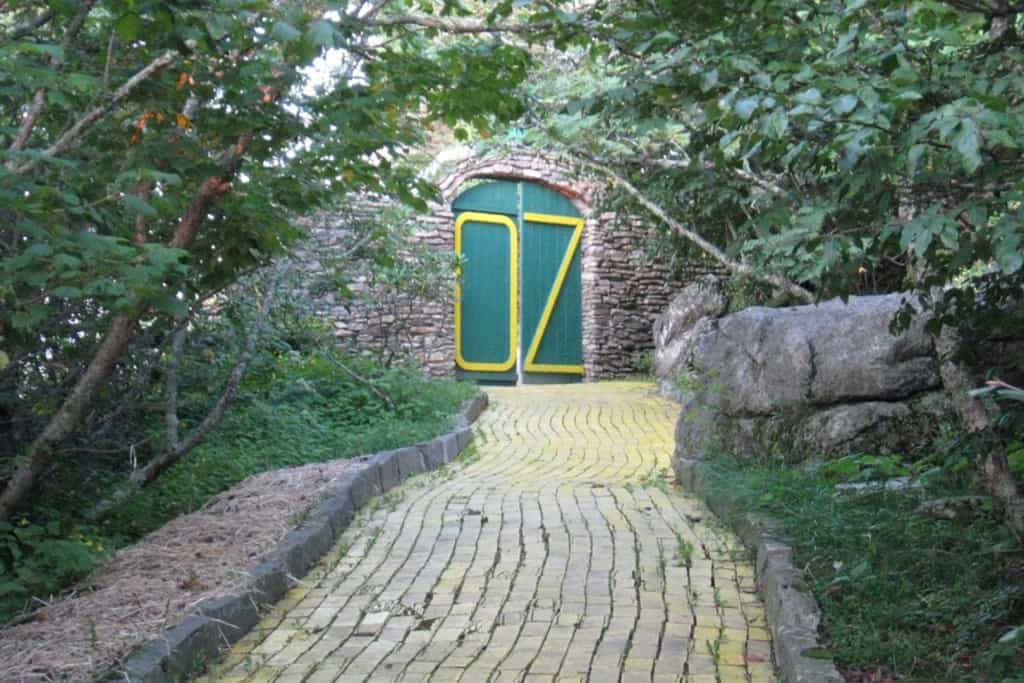 The Land of Oz was a short-lived fairytale, only operational from 1970-1980. It was dreamed and designed by Jack Pentes and headed by Grover Robbins. Unfortunately, Robbins was never able to see the fairytale come to life, as he died 6 months before the park opened. The park attracted 20,000 visitors on its opening day and people of all ages enjoyed it. The changing times, finances, lack of change and liabilities led to the park closings its gates in 1980, just 10 years after its debut. The park sat untouched and decaying for 10 years until restoration projects begun in 1990. Though much of the park is decayed after years of abandonment, today, the park is open once a year for a short festival called Autumn at OZ. Community members are invited to celebrate and reminisce the former glory of the Land of Oz. 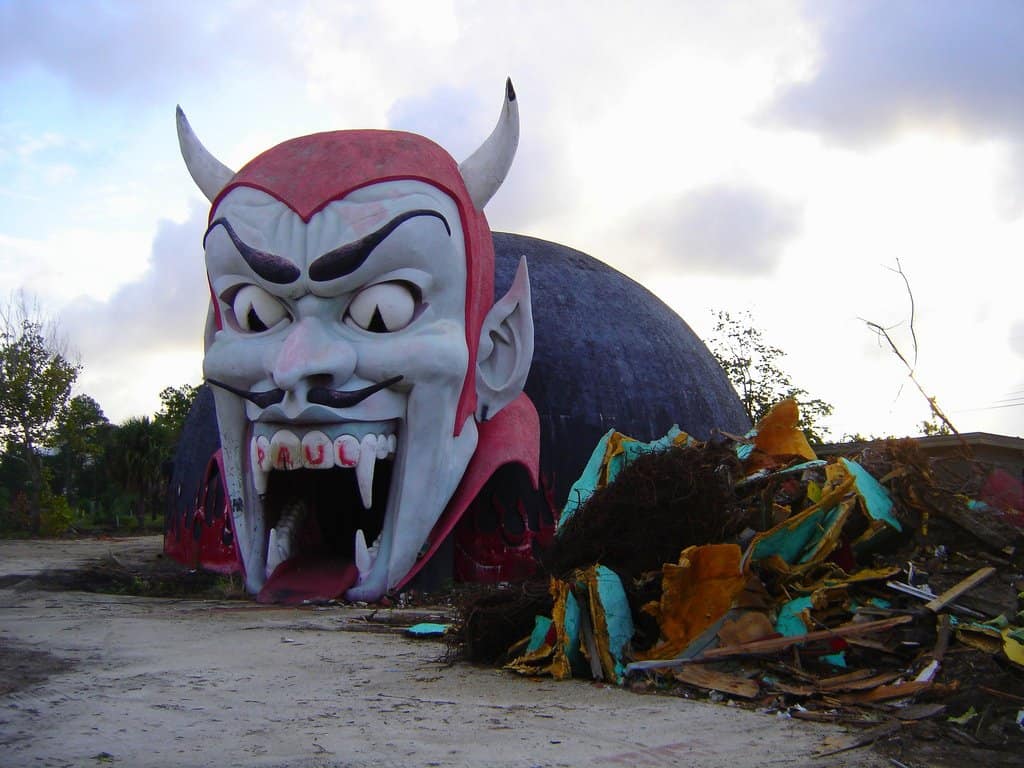 Miracle Strip was built in 1963 in Panama City, FL, across the street from the beach. The Starliner coaster was the main attraction for years, but as the park grew in popularity, more and more rides began to accompany it.

As Panama City developed into a spring break tourist hotspot, Miracle Strip attendees declined. September 2004 marked the last season for Miracle Strip and the owner, Billy Lark, sold the property for condo development. Slowly over the years, many of the rides and attractions were moved to different locations or disappeared from the grounds. A smaller version of the park was open in 2010 under the same name and is now home to the original Starliner coaster. 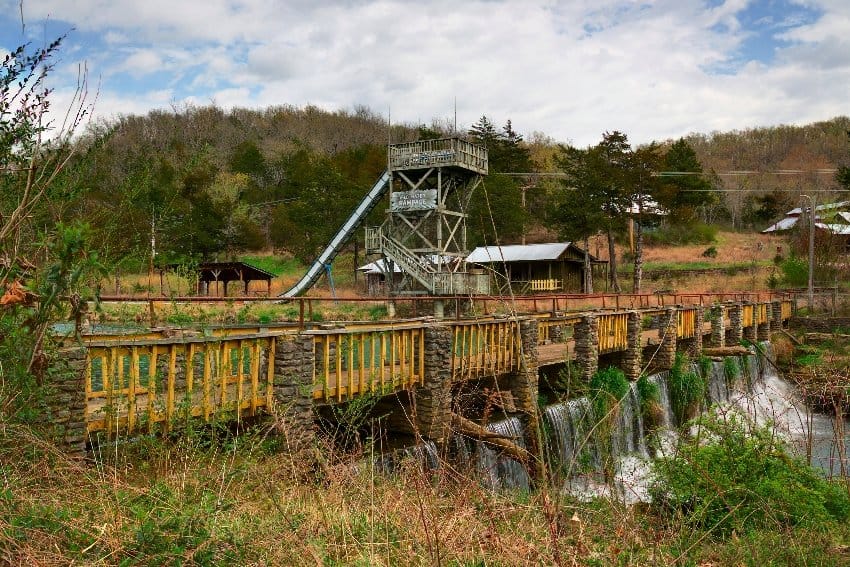 Dogpatch USA was built in 1968 and was based on the comic strip Li’l Abner, created by cartoonist Al Capp, and set in a fictional town called Dogpatch. In its early years, the park was a success. The park was bought out in 1972 and a winter sports complex called Marble Falls was created, overlooking Dogpatch in hopes of drawing a year-round crowd. However, a series of unusually warm winters, rising interest rates, and the end of the “Li’l Abner” comic strip due to Al Capp’s retirement in 1977 all contributed to the rise in expenses and the decrease in revenue. Dogpatch failed to make up for the failure of Marble Falls, and after its worst summer during the drought of 1980, it declared bankruptcy that November. After a few more instances of selling the park, it finally closed in 1993. Current owners have planned to restore the grounds and reopen. They opened the gates in December 2014 for 2 days for visitors to tour the park and learn about the new plans. 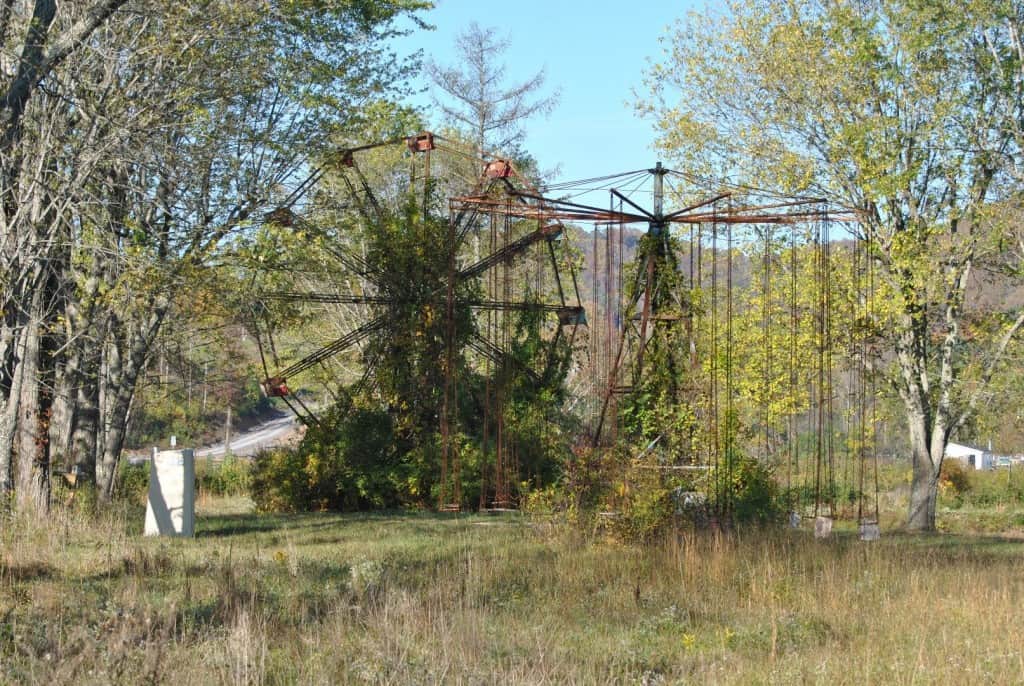 Lake Shawnee Amusement Park is said by many to be haunted. Built in the 1920’s, on what was later discovered as a Native American burial ground and a brutal location of a massacre of settlers. The park was closed in 1966 after two horrific accidents occurred on park grounds: the death of a young girl on the mechanical swings, and the drowning of a boy in Lake Shawnee. According to Visit West Virginia, the park took at least 6 lives during its time of operation. Lake Shawnee Park has been featured on the Discovery Channel’s “GhostLab” and the Travel Channel’s “The Most Terrifying Places in America“. Tours and haunted events now take place during the month of October for a short amount of time.