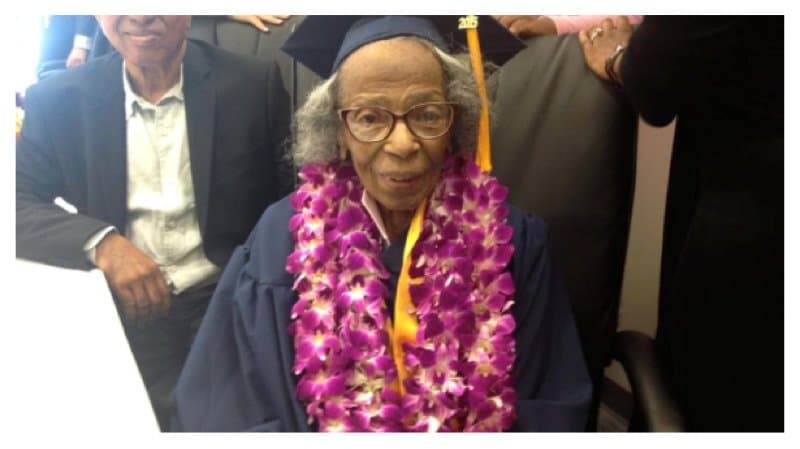 99-year-old Doreetha Daniels has been a student at College of the Canyons in Santa Clarita, California, since 2009 and has finally earned her degree. Daniels said that it was a personal goal of hers to get a degree before she reached her 100th birthday.

Doreetha Daniels said she was inspired to go back to school to her degree after seeing her grandchildren pursuing their Master’s degrees. She stated that she had to work a bit harder than her classmates. After suffering a stroke, it made it hard for Doreetha to make it to class. She often had difficulties hearing her professors speak as well as problems keeping up with the classwork. But that didn’t stop her from reaching her goal. Doreetha said the younger generation should be appreciative of the opportunity to gain a higher education.

“It seems like the iPhones in their lap are sometimes more important to students than what’s going on in the classroom. I think somebody needs to say something or something needs to happen to show the younger ones how special and unique their opportunity to learn is. I understand that to earn a degree in college at age 99, that’s a bit unusual.”

After receiving her degree, Doreetha became the oldest graduate in the university’s history. Doreetha’s on-campus tutor, Liz Shaker, said that Doreetha is an inspiration for everyone. She’s proof that it’s never too late to follow your dreams no matter the challenges you may face in life.

“Doreetha is a living testament to the saying ‘if there is a will, there is a way’. Her desire to get out of bed each day and come to school and face the challenges in and outside of the classroom inspired us all. She is truly an amazing woman who has impacted my life and I feel so fortunate that I was able to experience her journey alongside her.”