Weddings are one of the most cherished and time honored rituals across all cultures – the glorious and beautiful ceremonial joining to two people in love and fidelity. With all of the joy and light-heartedness floating around, of course you’ll find that people like to get a little bit silly. And yet, there are people who, no matter how much planning they go through (or class that they think they have), manage to capture not only the weirdest but also the trashiest, dumbest, and obliviously terrible wedding photos. 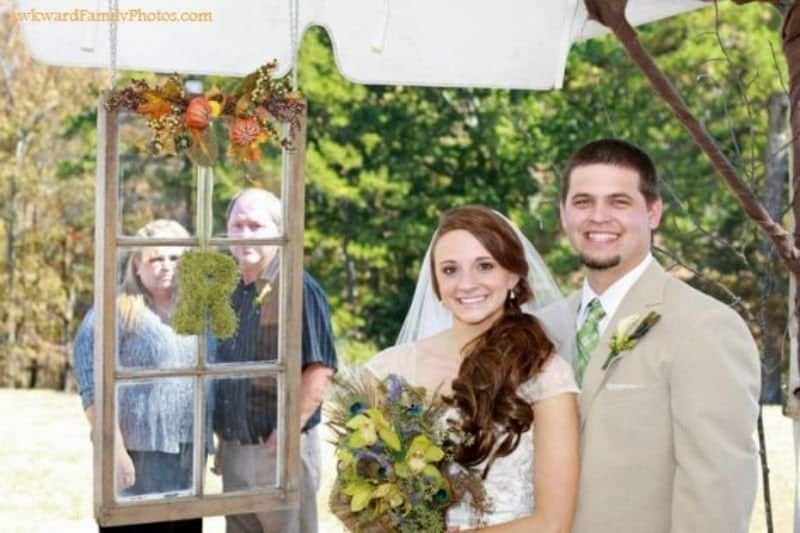 Almost everyone loves to include their folks in their wedding, but it’s hard to figure out just what was trying to be accomplished with the parents in this photo. Is it a photobomb? Perhaps, they’re pretending to be ghosts? 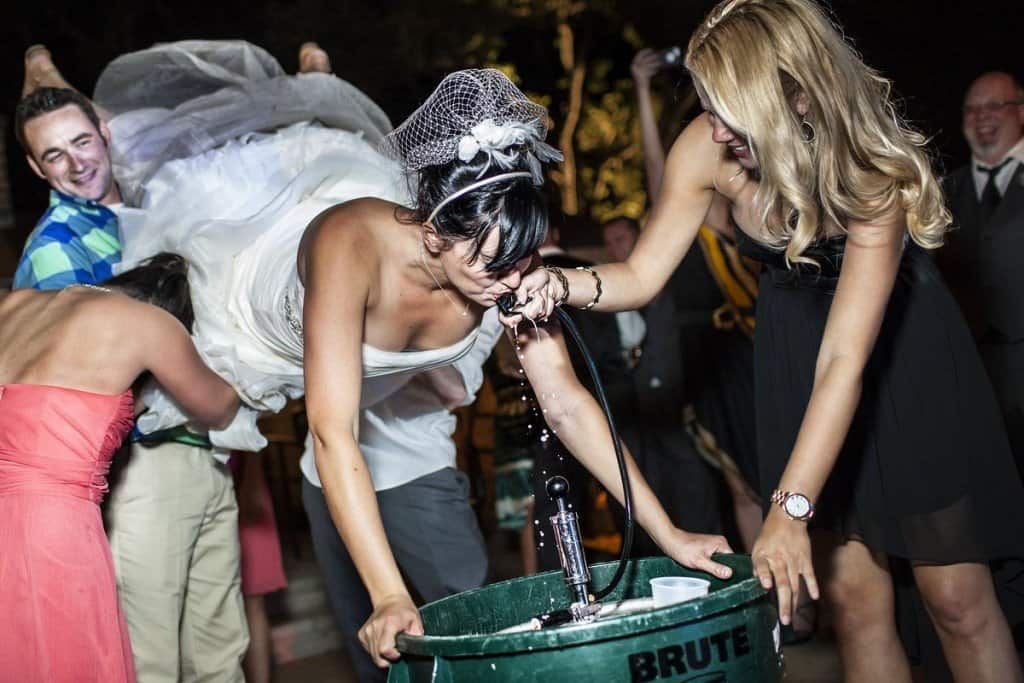 When it comes to that big day, every bride wants to have all the fun in the world to remember and recount to her grandchildren. Being able to do a keg stand in your wedding dress is one heck of a memory. 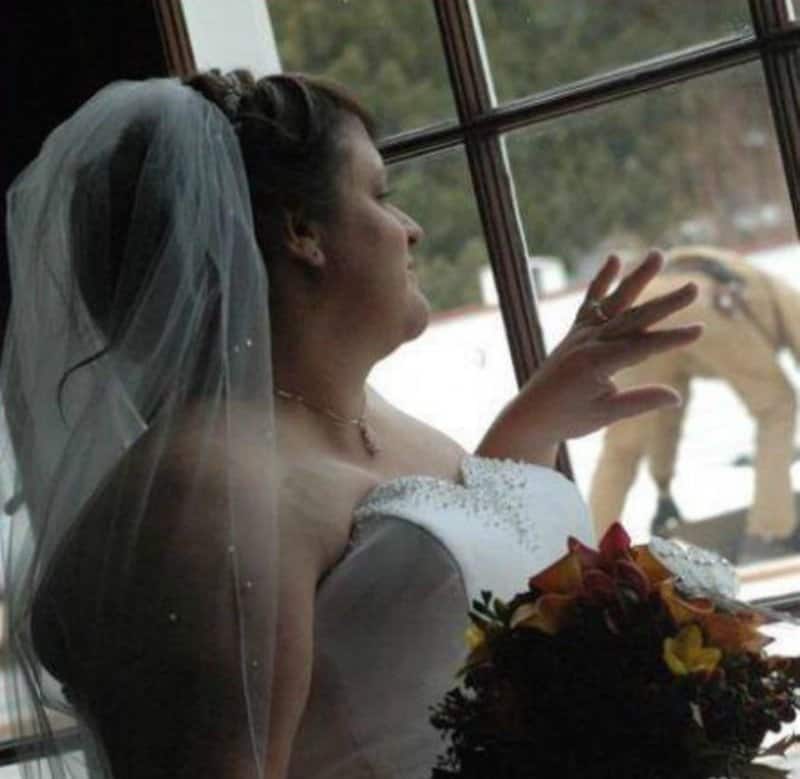 The bride’s hand looks so dainty in this photo that it could be mistaken for being intentional. Taking a professional picture is definitely one way to tell your husband-to-be that you’re dumping him for the handyman. 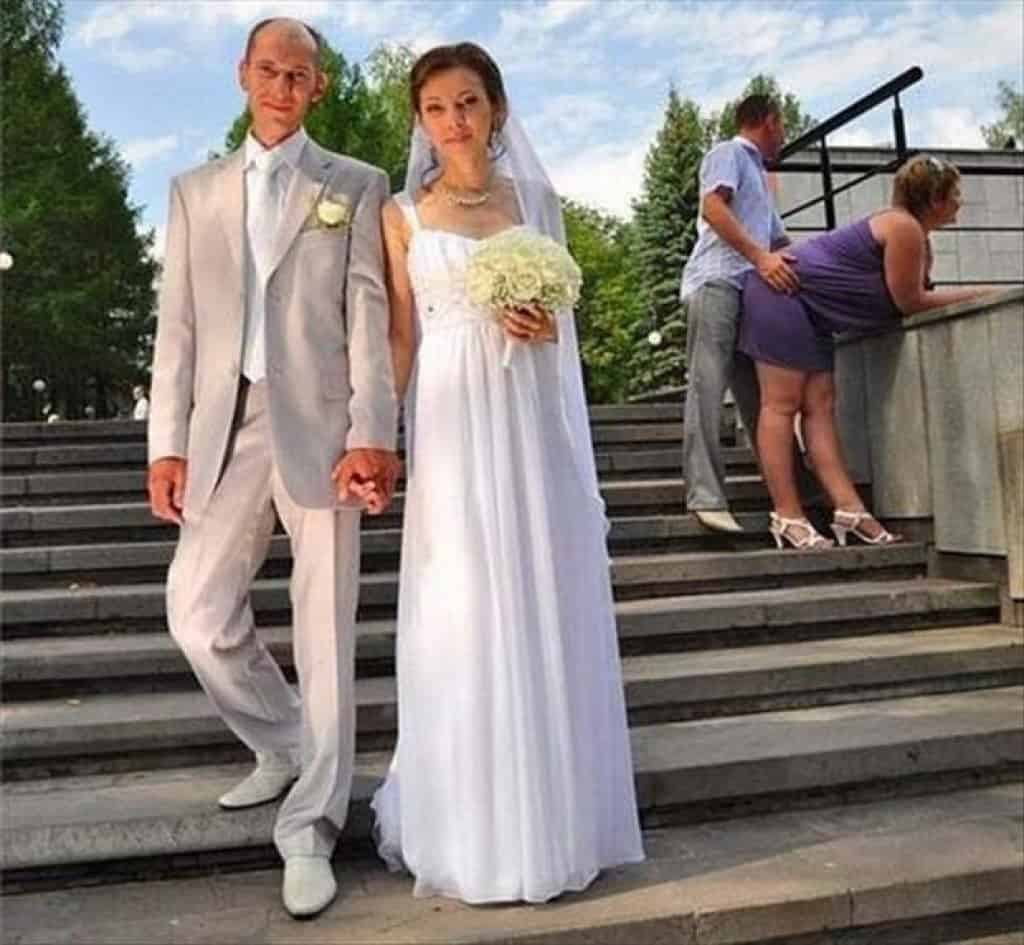 Some people are lucky enough to take amazing and timeless wedding pictures, fit for a photography portfolio. Other people get photobombed by couples dry-humping in the background. 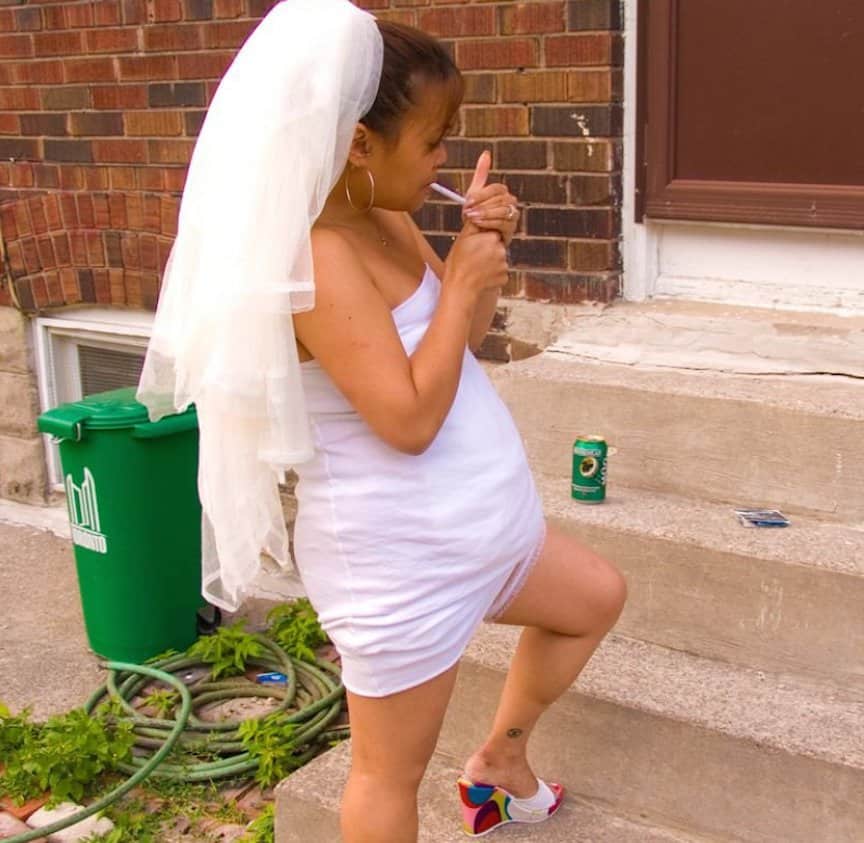 There is absolutely nothing wrong with getting married, or being pregnant, or drinking beer, or smoking a cigarette, or wearing a mini-dress – it’s a free country. But doing all of those things at exactly the same time? It isn’t recommended if you’re shooting for classiness. 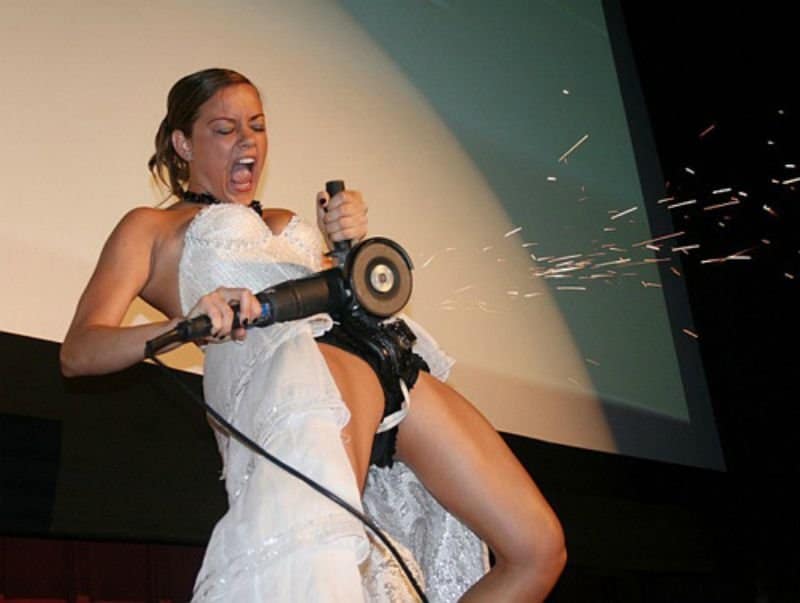 Theme weddings are great and some people love to take them to the next level. It’s hard to tell if this lovely bride is sawing off a chastity belt or indulging in some other fetishistic activity, but more power to her for pulling it off.

That Rug Tied the Whole Room Together 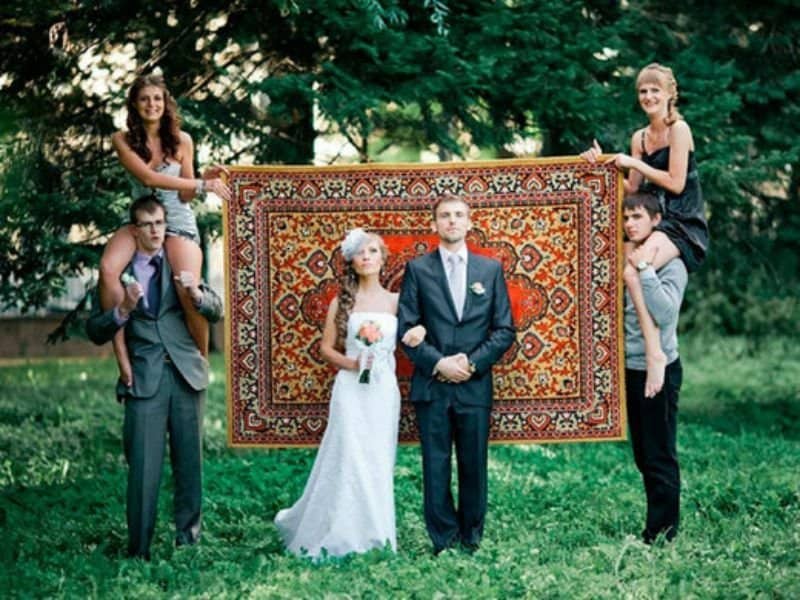 Quirks, oddities, inside jokes – they are all-important elements of relationships with friends. They also are (hopefully) words used to describe this wedding photo. If this picture is supposed to be taken seriously, it absolutely missed its mark.

You May Kiss The Groom 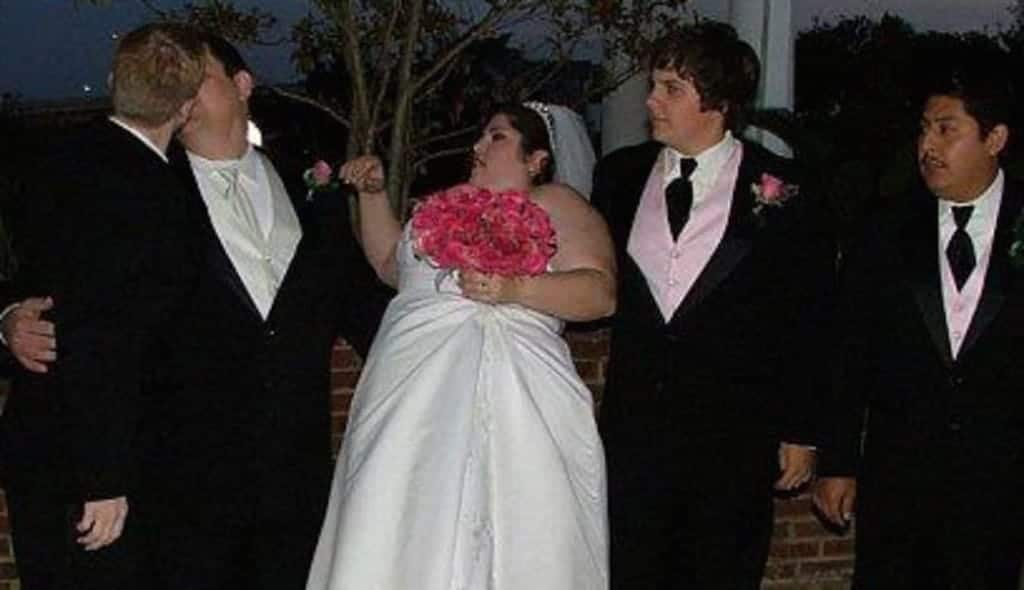 All brides fear getting dumped on the day of their wedding. For this lovely lady’s sake, let’s hope that the groom and his attendant are indulging in a little homoerotic joking and nothing else. 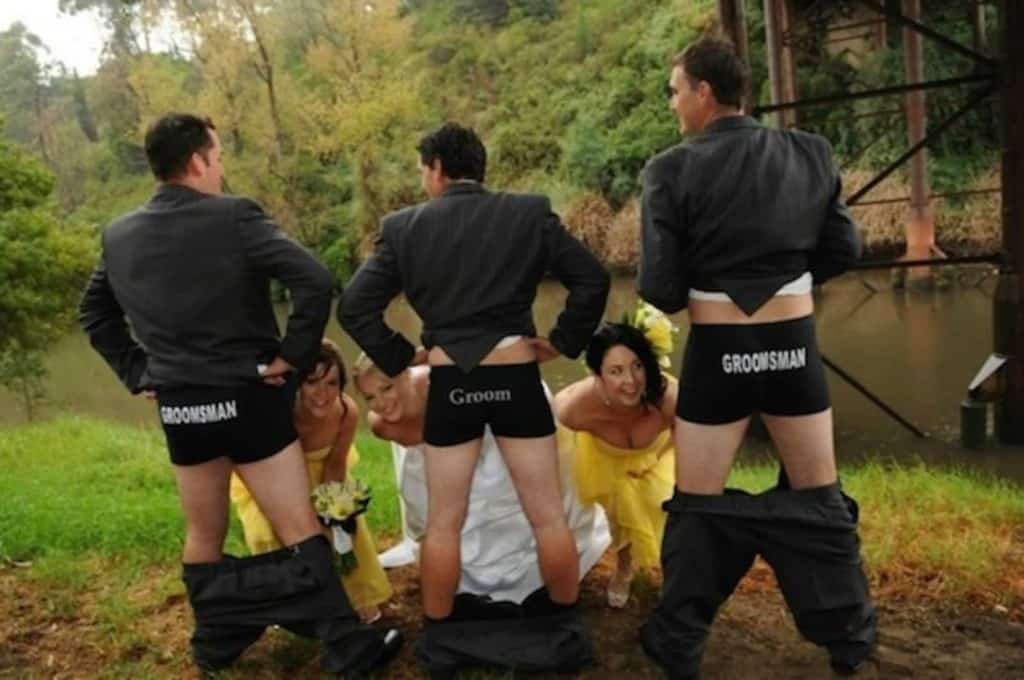 Plenty of woman have criteria when it comes to choosing their men. If a nice fit tushie and a good strong pair of legs is on this bride’s list, then she made off like a bandit. 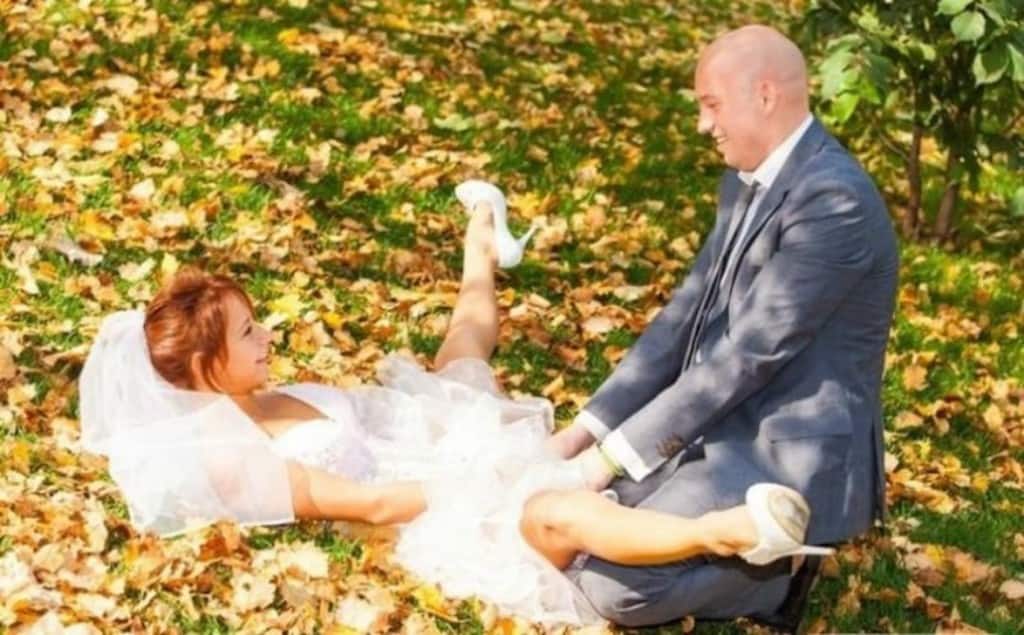 Most people don’t have any illusions about what happens between men and women before they wed. Although most pretend to be chaste for appearances sake, this couple doesn’t seem to want to leave anything to anyone’s imagination. 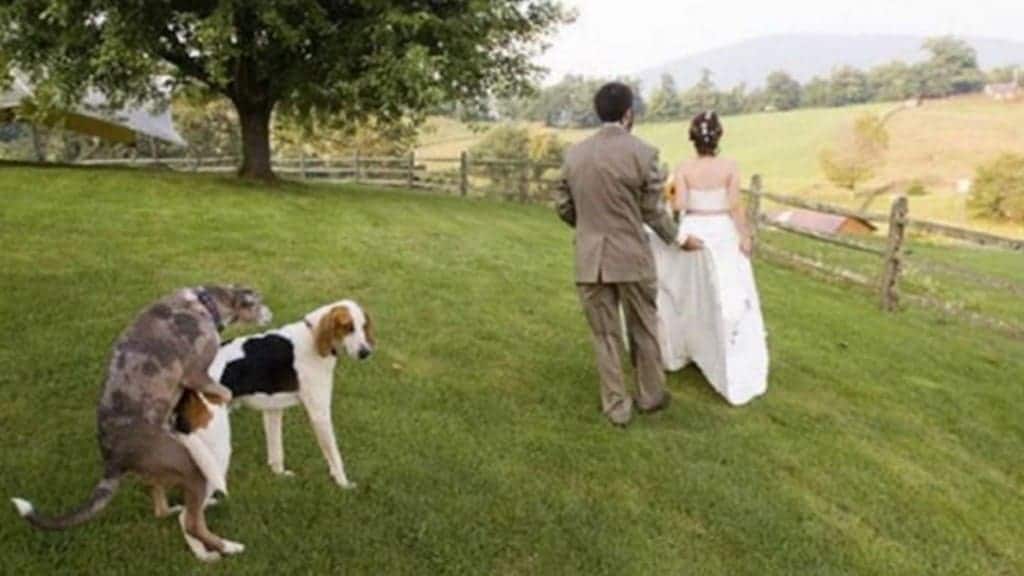 At first, you might believe that this picture was purely an accident. But then you see not only are those two very happy pups perfectly in frame but the groom has a handful of derriere. 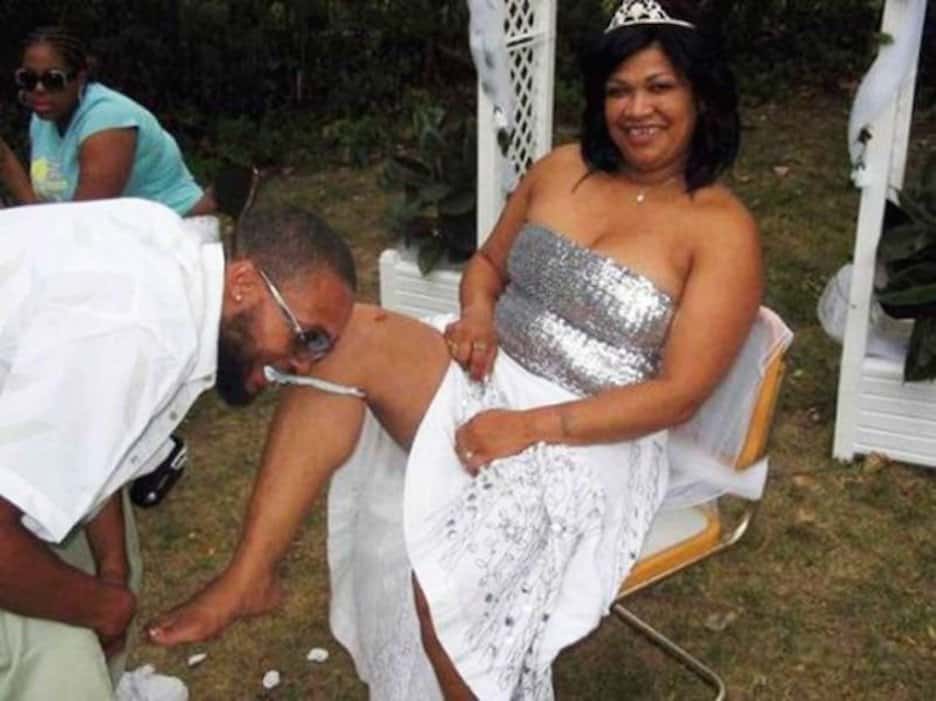 Taking off the bride’s garter is a tradition that no one should pass up on their wedding – its just a big part of the fun. But it looks like this couple passed on a lot of other things, namely a little class. 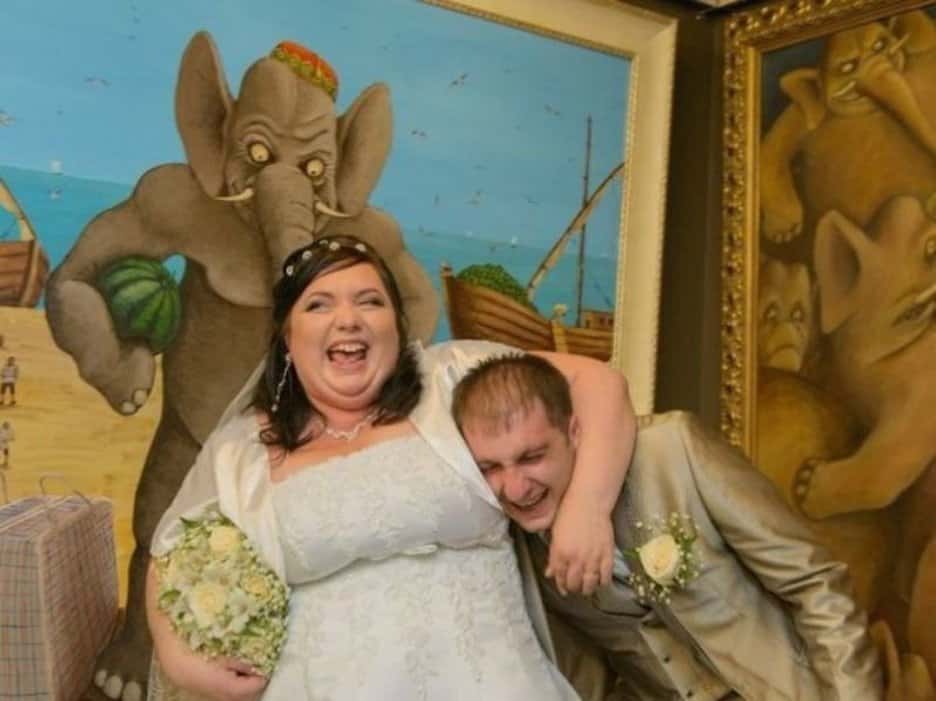 This picture is actually quite charming – the bride and groom seem to be having a good bit of fun. But then you catch a glimpse of that evil looking elephant in the background and wonder where they got their photographer.

Walk in the Park 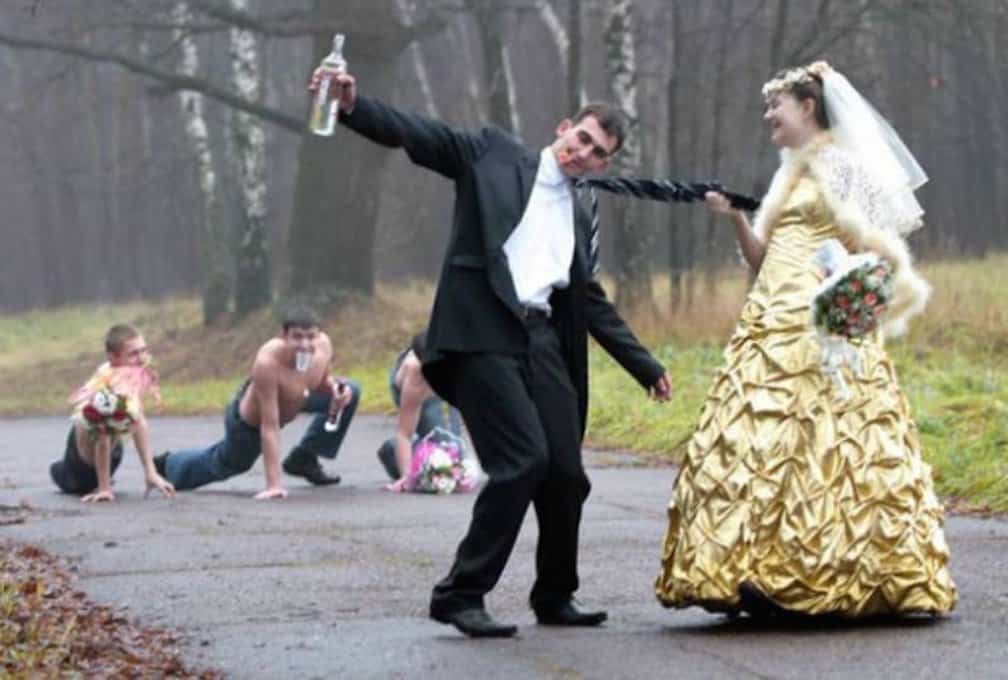 This bride and groom look like their having a rip-roaring, drunken good time. Then again, so do the three conspicuously shirtless and totally sloshed people crouched in the background. 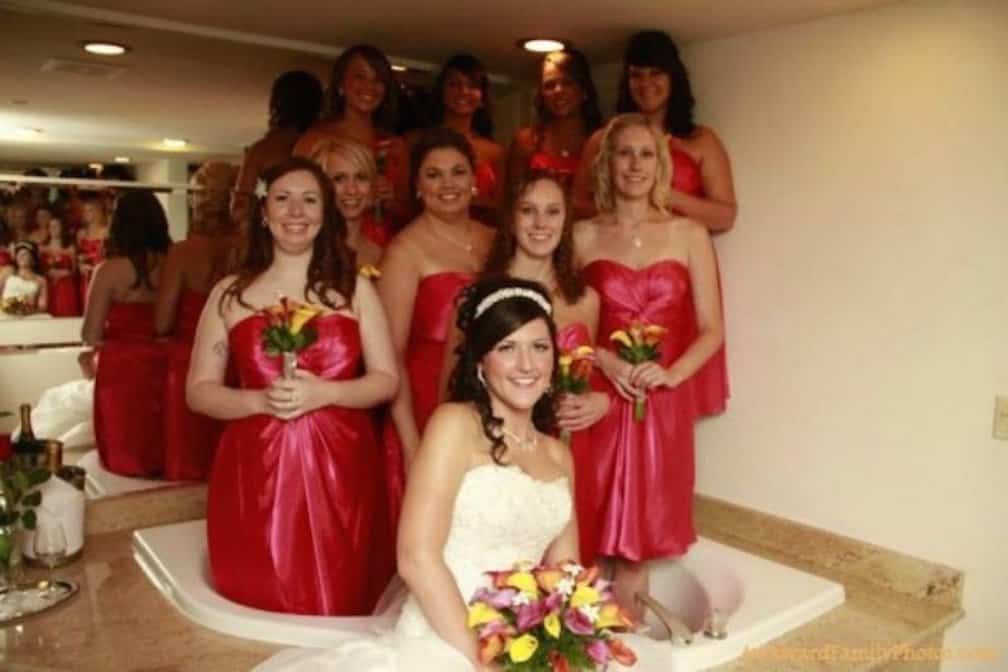 Sometimes a locale doesn’t offer much in the way of photo staging. This woman had to be getting married in an utterly horrid place if she’s getting photographed with her bridesmaids standing packed into a jacuzzi. 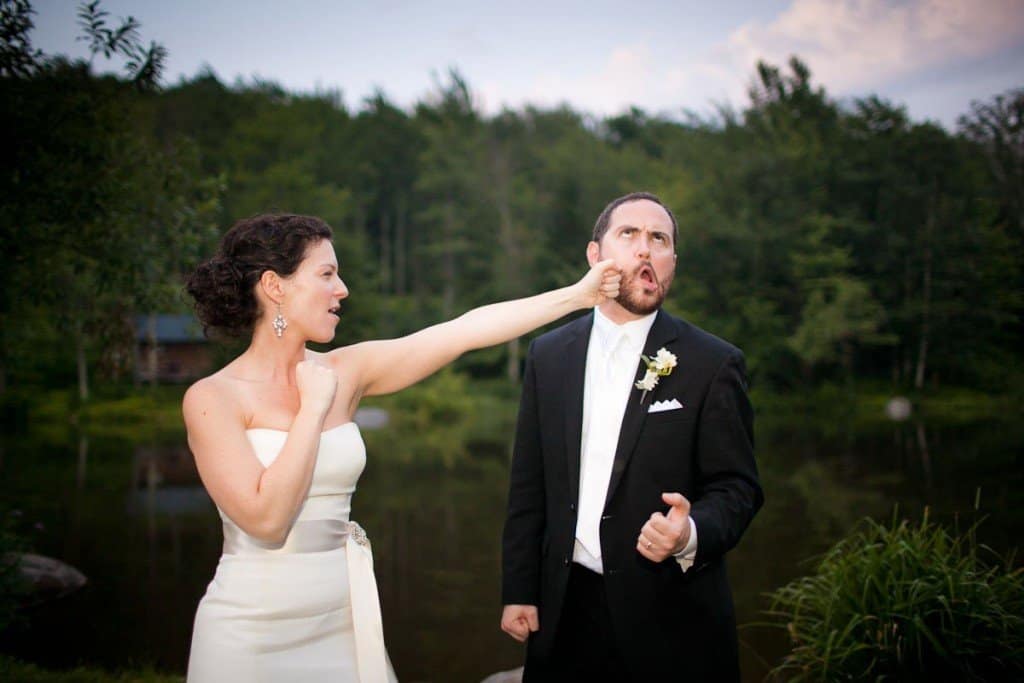 If this is a joke, it is as silly and ironic as it is adorable. If it isn’t a joke, you should probably keep an eye out for this groom’s obituary. 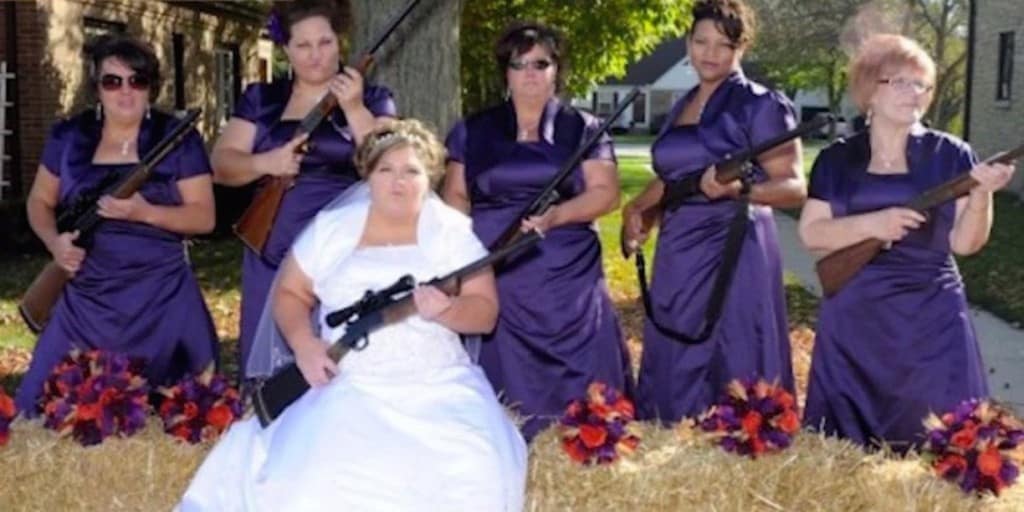 People get scared when they see poorly dressed men photographed with big guns. So why isn’t anyone afraid of this picture – if anything, its even more terrifying. 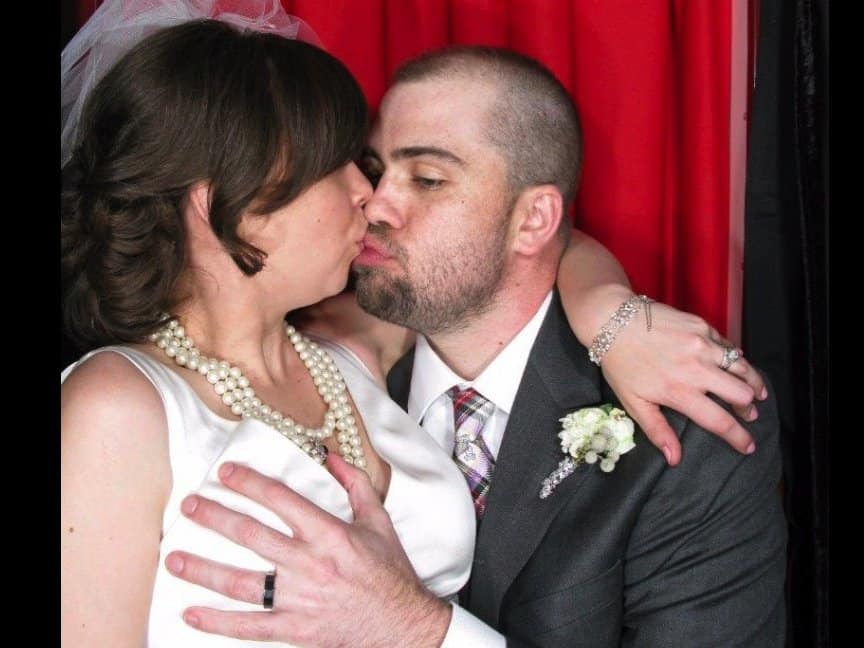 When a man marries a woman, it is assumed that he finds every inch of her desirable and attractive. This groom certainly leaves no doubt of how he feels about his bride’s body. 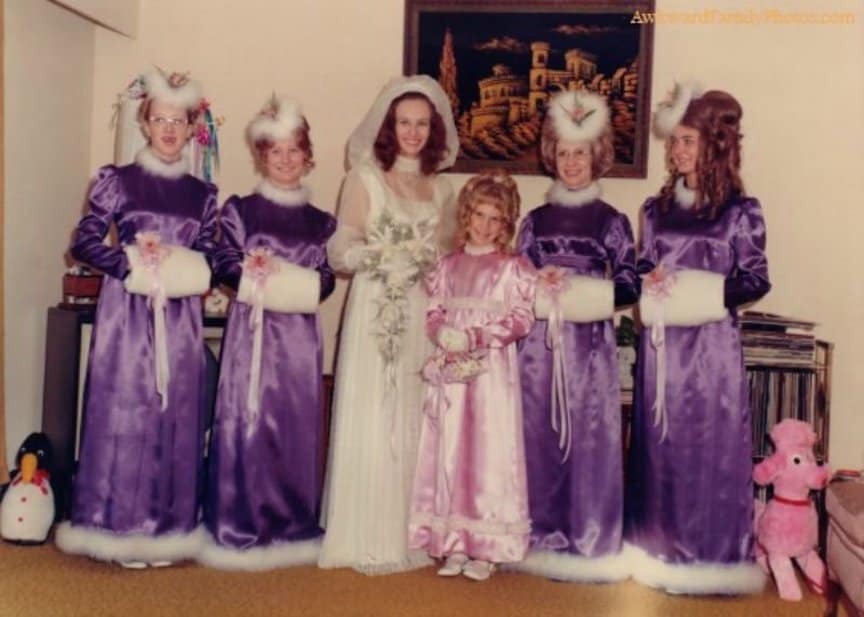 All things considered, there is nothing off about this photo – it’s just a bride and her attendants. But then there is the horrid shiny fabric in a harsh purple (and pink), the fur edging, the goofy hair pieces, and the flower-adorned muffs. Yikes.

You And Me And The Homeless Guy Makes Three 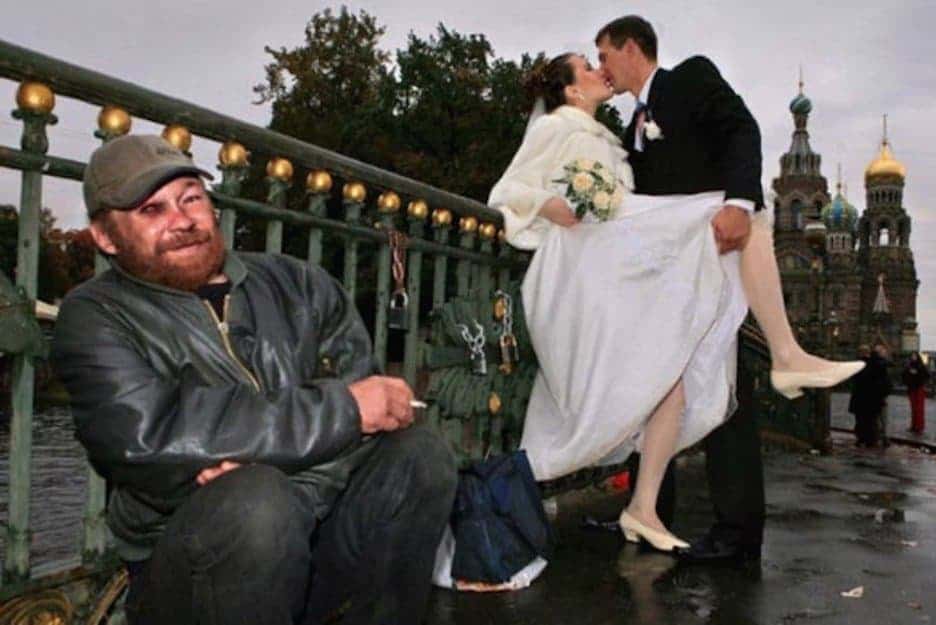 Some people are so generous that they feel the need to include anyone and everyone in their wedding festivities. It is hard to tell whether this picture is supposed to reflect kindness or just really bad framing.