When searching for a new house to buy or rent, people often check on the neighborhood and ask about the neighbors. These are the people that might be living right next door, so you’d want them to be good and quiet people. However, that doesn’t always happen, with many people getting noisy and rude neighbors. This list shows people that have had enough of their neighbors, leaving some hilarious notes to voice their concerns. Check out these 20 notes from people that were less then impressed by their neighbors!

This one was too funny not to share, as Nick is more concerned about the Wi-Fi being out then he is about the neighbors possibly moving. Um, stop stealing the Wi-Fi, Nick! 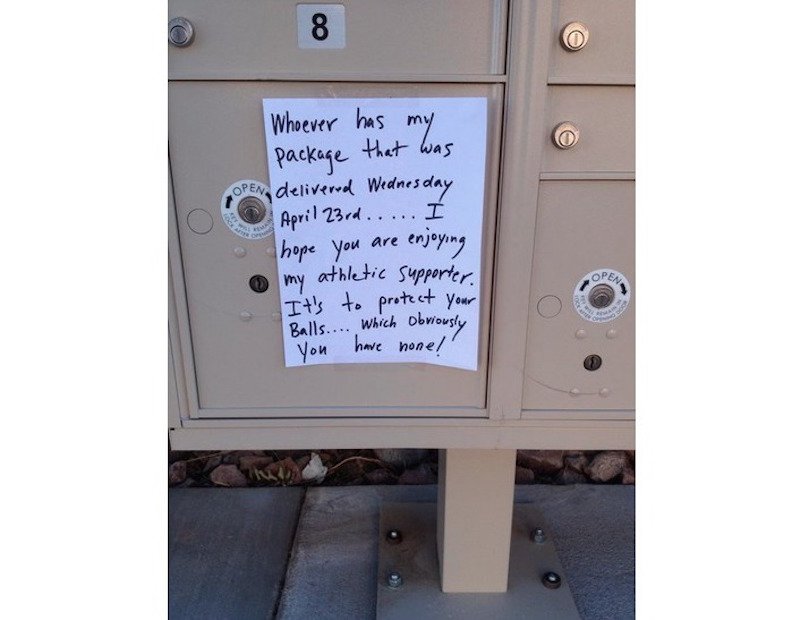 This person was just trying to protect his goodies, but then someone went and stole his package! He calls them out and tells them they don’t have any of the things he was trying to protect. 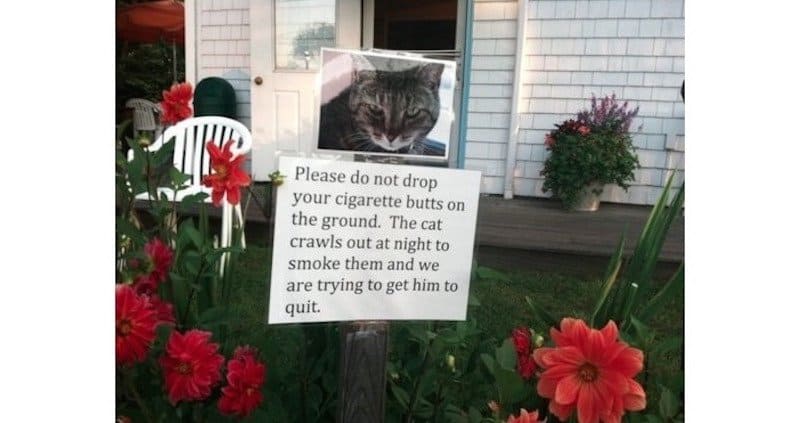 It looks like cats can get addicted to smoking too! This cat crawls out at night to smoke the cigarette butts on the ground, so the owners are asking neighbors to stop throwing them on the ground!

Not All About That Bass 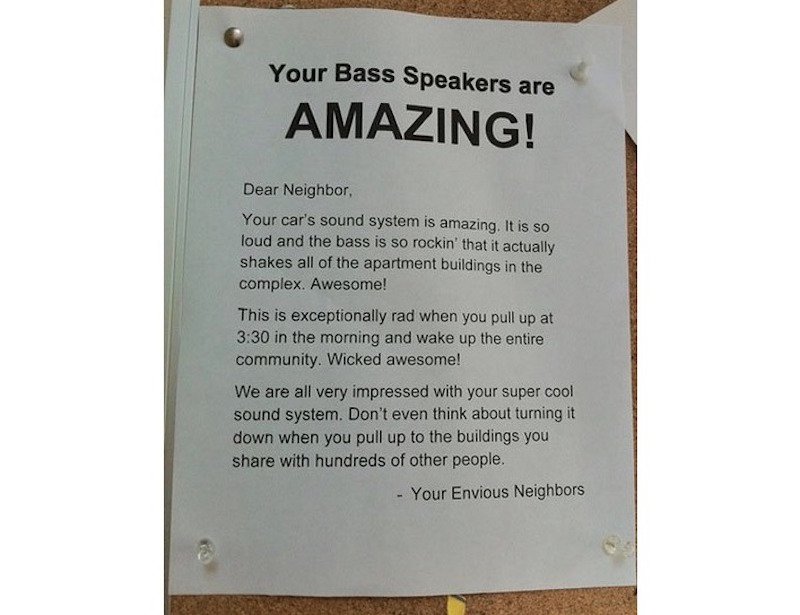 Meghan Trainor is All About That Bass, but these neighbors definitely aren’t! Do you think the owner of the bass speakers will catch on to the sarcasm or turn up the music louder?

Kill Them With Kindness 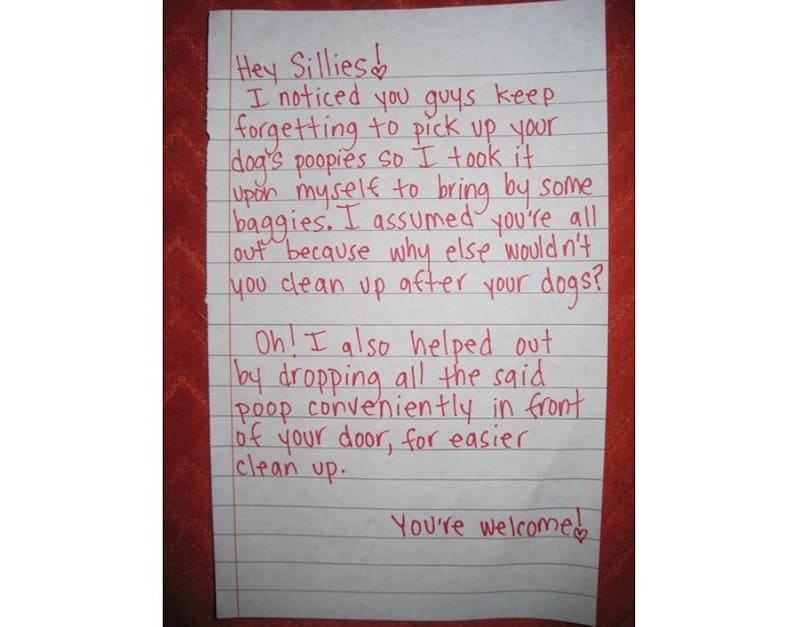 How could you get mad at anyone when they leave a note using exclamation points with hearts? She even brought poop baggies to help you pick up your dog’s poop, but then was a little rude when she piled up all the poop in front of their door. 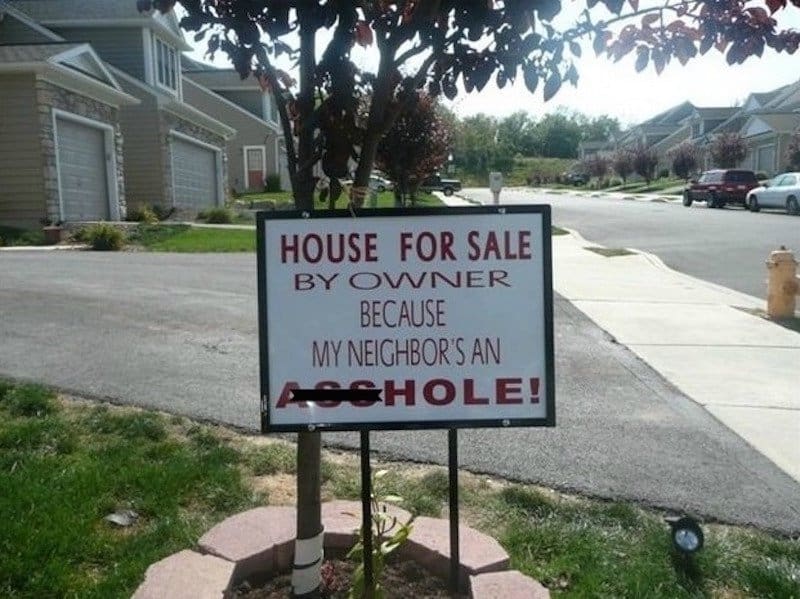 If you are trying to sell your house, this might not be the best advertisement to use. It sends a message to your neighbors, but not a very good message to potential buyers.

This Is A Pre-Warning 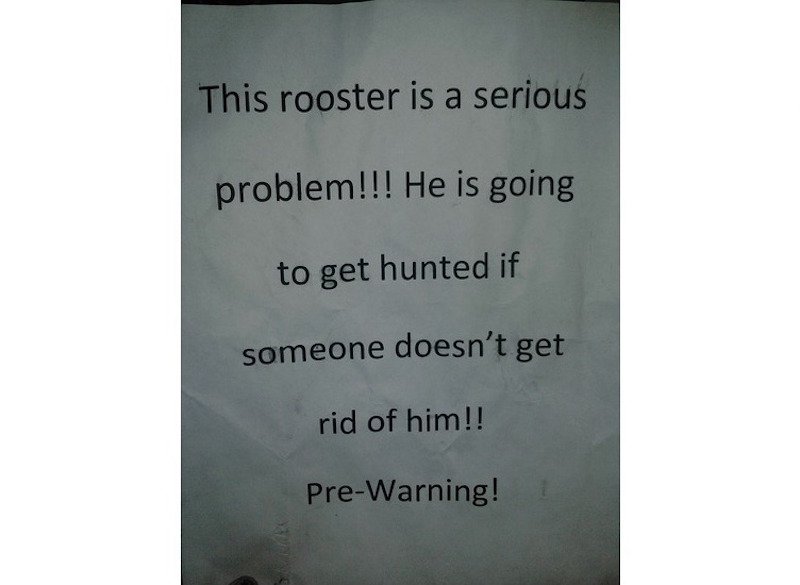 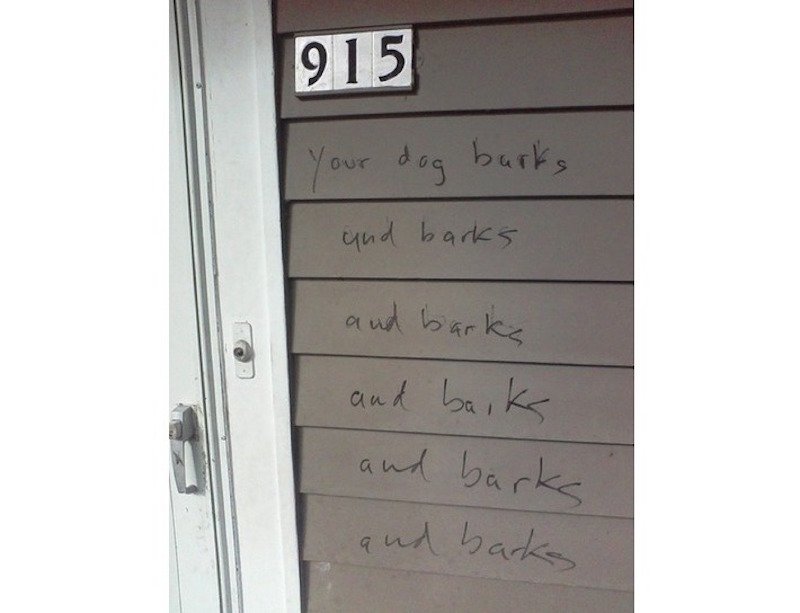 Dogs that constantly bark can be very annoying, but so can neighbors that write on your house! They left the paper at home and just wrote their note right on the house, which would tick us off so much.

Exorcisms On Weekends Only 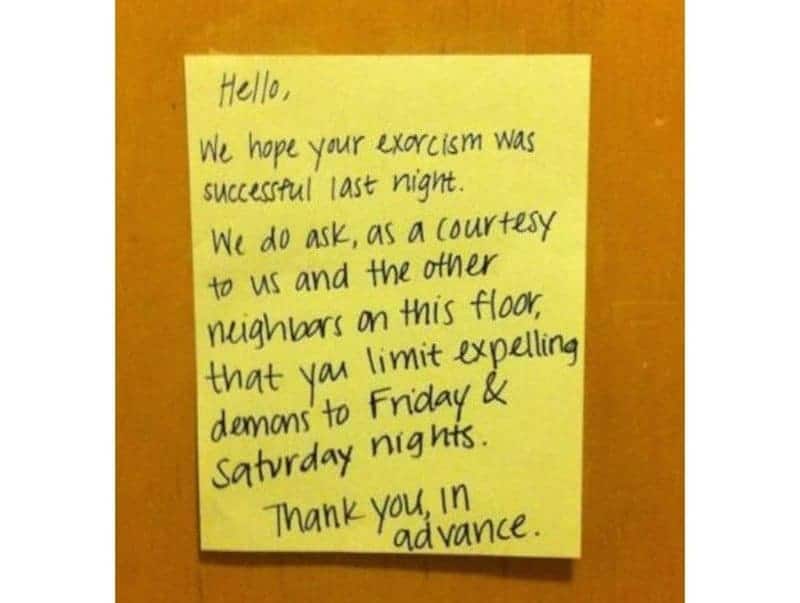 These neighbors don’t seem to understand that you need to take care of the demons when they are present, whether it is a weekday or weekend. They want the exorcisms to happen on the weekends only, so lets hope the demons work with them! 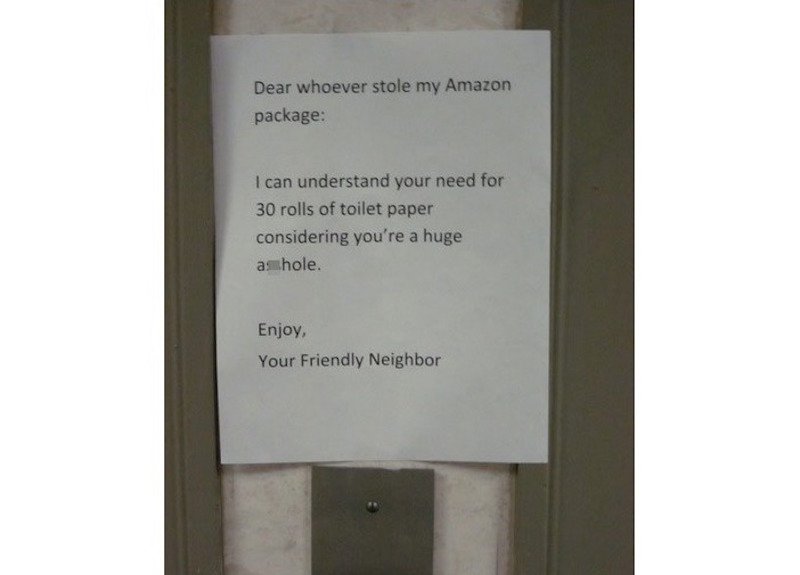 While the other person may have been disappointed with a jockstrap in the package they stole, this person might be saving money on toilet paper for a while! This person had a clever way of calling them out on it, though. 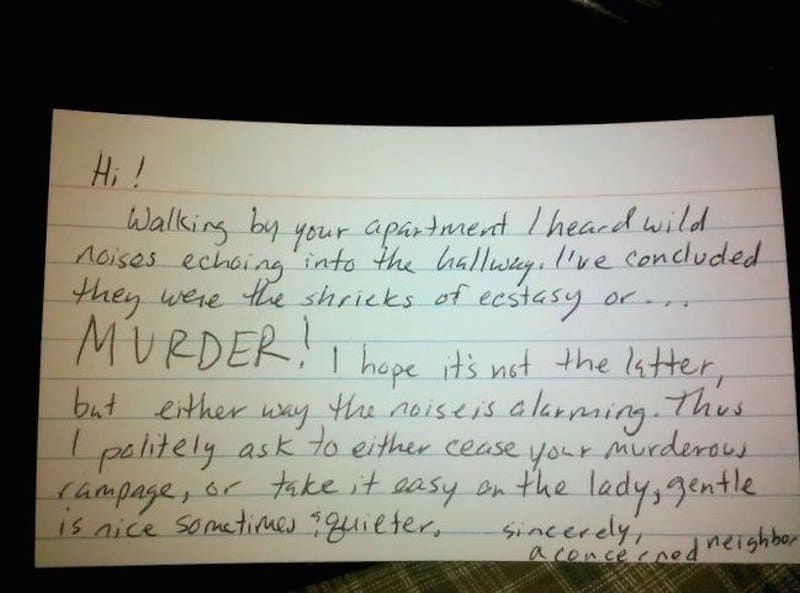 How terrible is this person going to feel if they were actually living next to a serial killer and played it off as sex noises? It is beyond weird they compared the two, but we wonder if things got quieter?

We aren’t sure about this neighborhood, but it is really hard to control where dandelions grow and how many of them pop up. This deeply disappointed neighborhood seems to think this person has let them get out of control and they need to take care of them now! 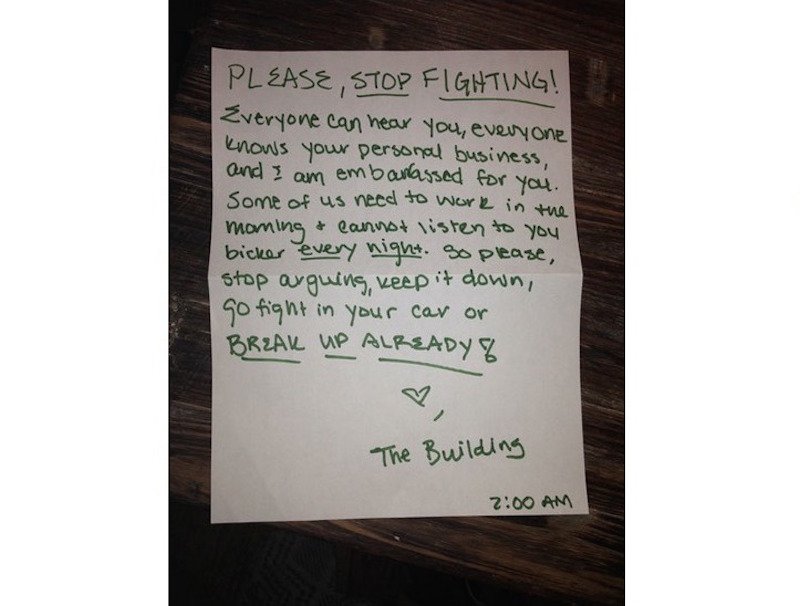 When your fighting is so bad that the neighborhood can hear you, then you might want to consider how healthy that relationship is! We don’t think fighting in the car will help, so just break up already. 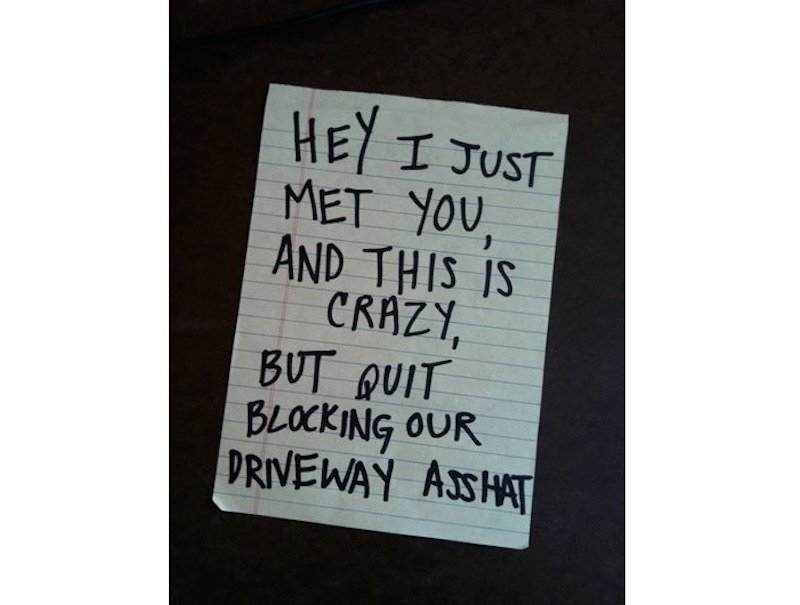 We think Carly Rae Jepsen may have sung it a different way, but we do like this version a lot better. It looks like these new neighbors are not making a good first impression! 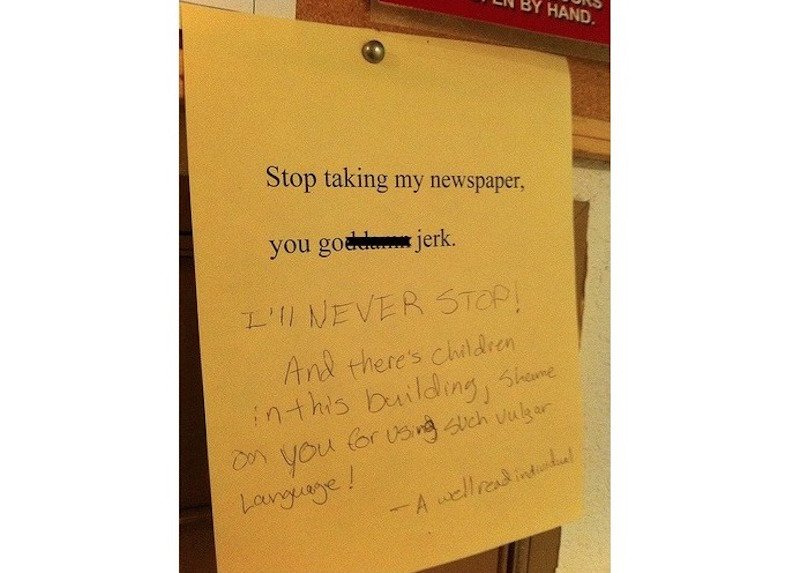 This person may be stealing your newspaper every day, but they still have the right to judge you for the language you use. We do love the signature though, as they burn them one last time! 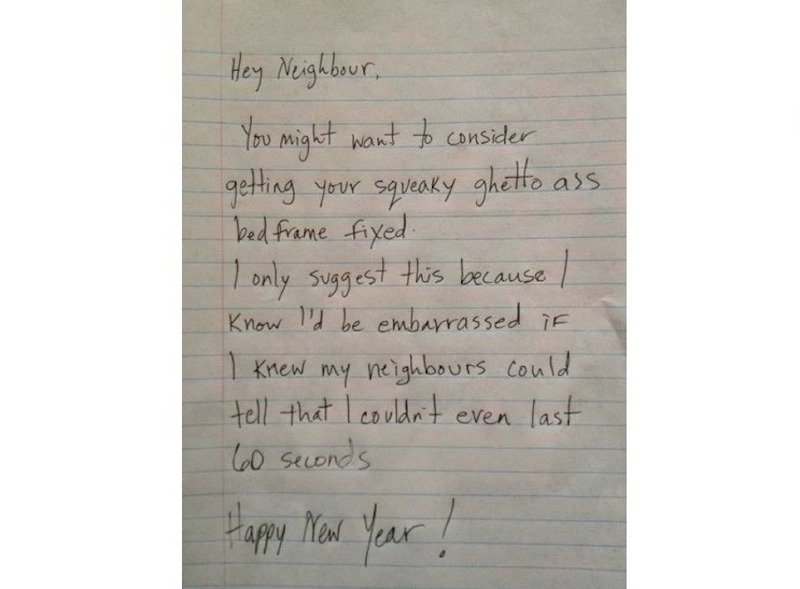 Time to get a new bed, as you are so loud that your neighbors can hear you having sex. They shouldn’t complain though, as it only lasts for 60 seconds, at least they don’t have to put up with it for long. 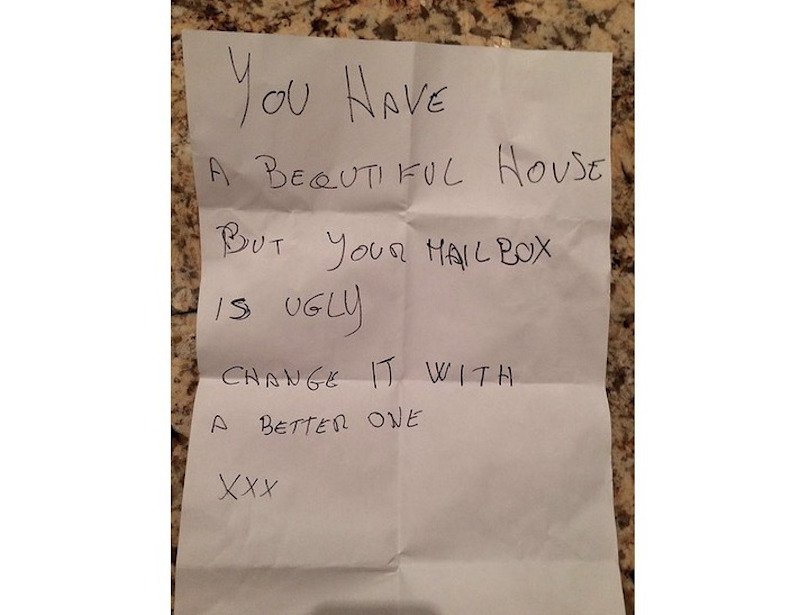 People complain about stealing packages or dogs pooping in their yard, but this note has gone too far! They are complaining about the mailbox being too ugly. Aren’t all mailboxes the same? 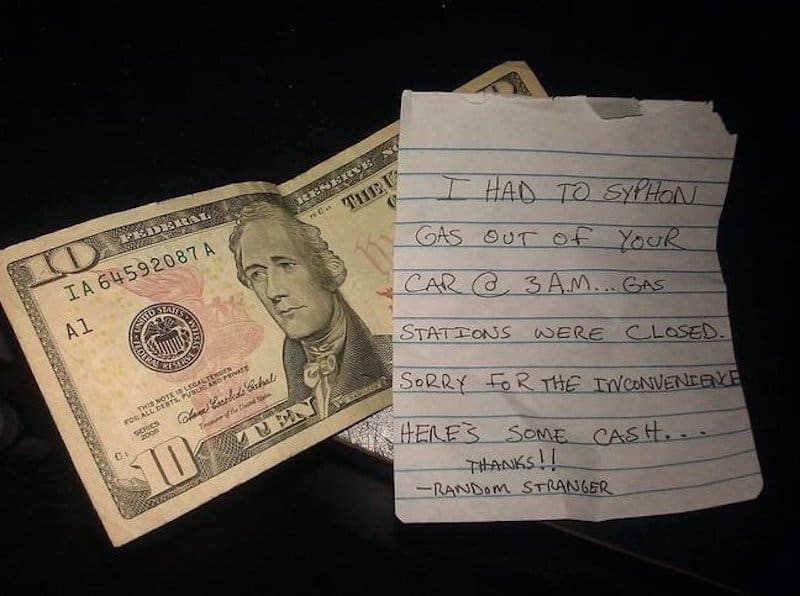 This person may have stolen some gas from you during the night, but at least they left a note explaining the situation and leaving you money to go get more! It’s wrong what they did, but this is so clever that you can’t be mad about it. 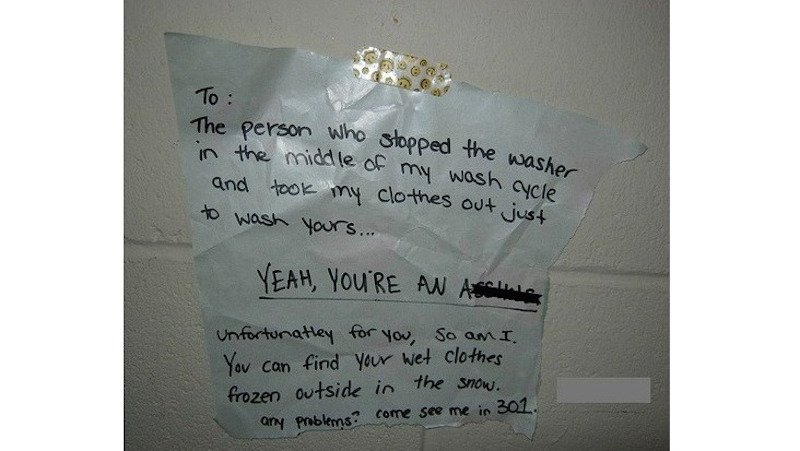 Having a community laundry room is the worst and this is the perfect example of why. People will come in and take your clothes out to start theirs, but this person was having none of it. They seem so angry, but then use a smiley face bandaid to hang the note! 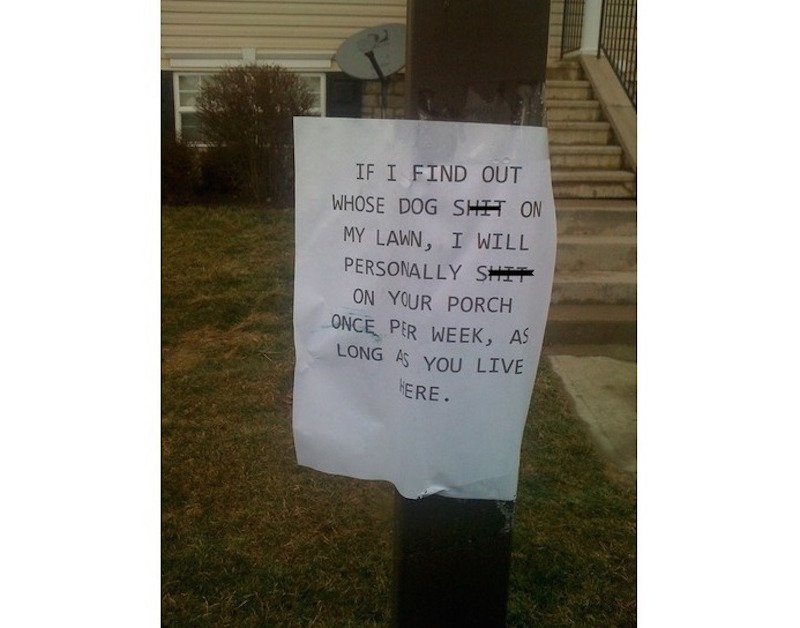 If your dog did poop on their lawn, we think you should move right now! You could try apologizing, but it might be easier to just move and not have poop on your porch every week.