Optical illusions are some of the coolest styles of art out there—from “spinning” wheels that are really stationary, to those famous shift-in-perception pictures we know from psychology classes. They have the ability to entrance us, make us say “What the–?” as we try to figure out their mysteries. Some optical illusions turn up as street art, or maybe just the way a drain is framed by bubbles as the water empties out of the sink. Here are some of those illusions, and more. 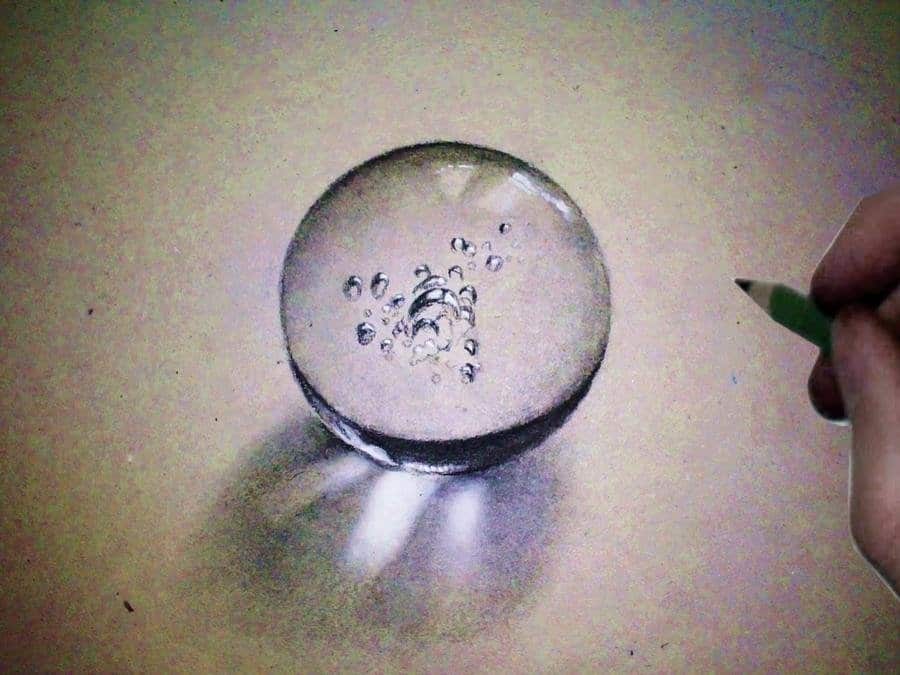 You’d think there are real bubbles inside that image. But there aren’t. It’s all a drawing. But it made you look twice, didn’t it? 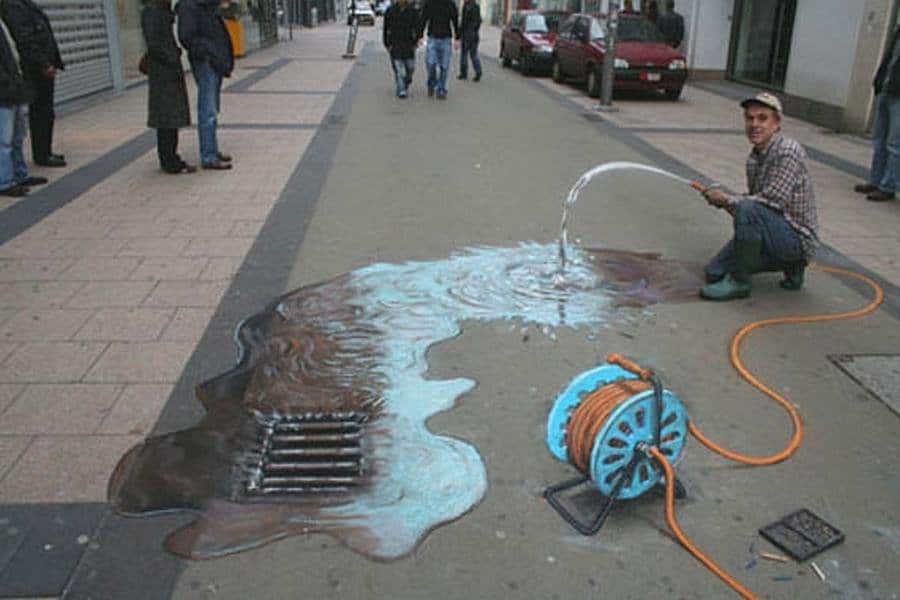 This is one of the best 3-D art illusions: it looks like real water, coming out of an actual hose on a reel. But look again. The hose reel is drawn on the ground, just like the water. 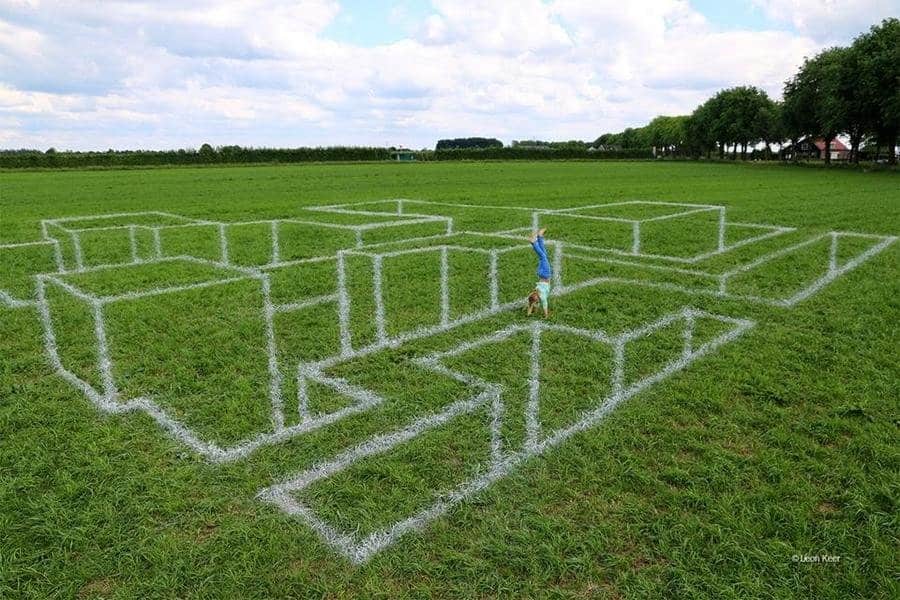 The girl doing a handstand on the grass in between two of those chalk lines makes it look like she’s doing gymnastics on top of an actual maze. It’s freaky once your perception shifts. 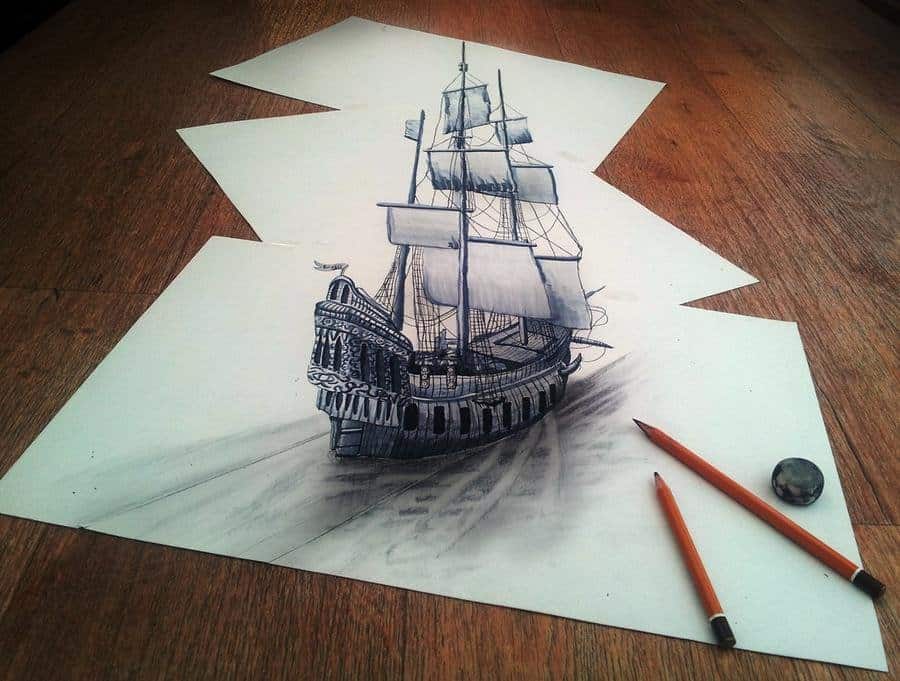 Whoever drew this one is not only supremely good at detail, but the arranging of the three pieces of paper behind the first, and then drawing parts of the ship on each of those pieces to make it look like it’s popping off the page? There are no words for this 3D genius. 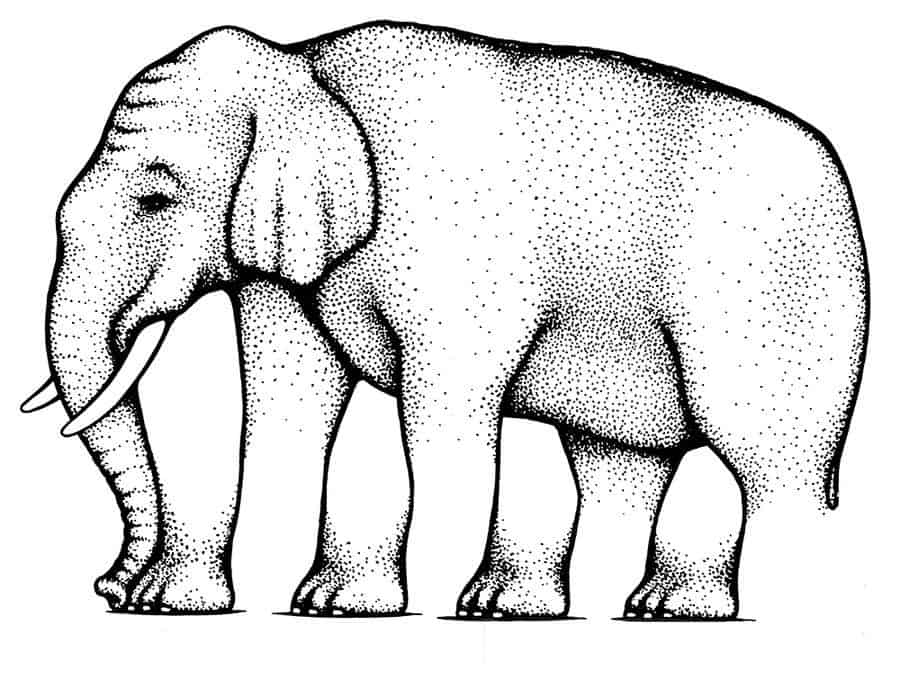 This has to be one of the most famously mind-boggling illusions that appears in lots of brain teaser books. Logic dictates elephants have four legs, right? But the way this is drawn, it appears as if the elephant has more than four. 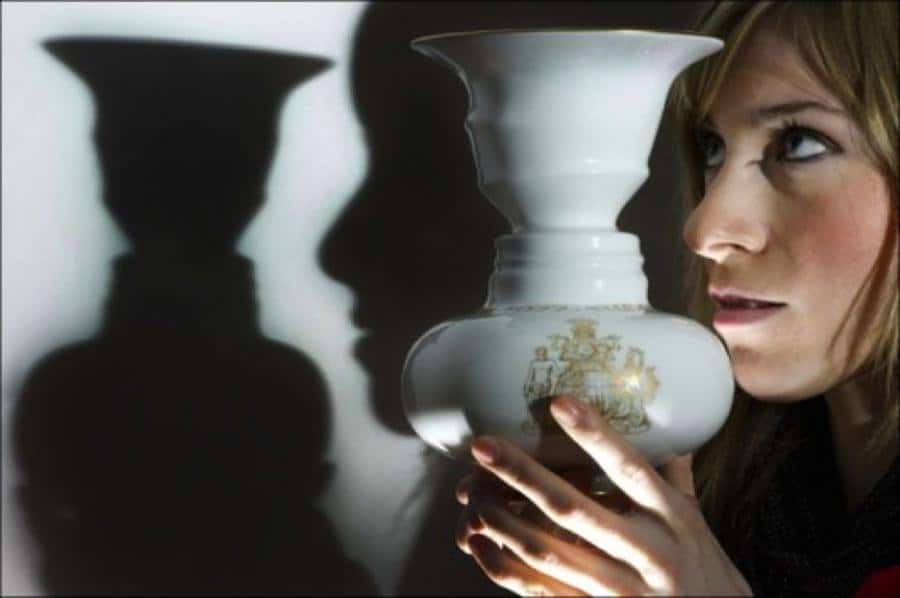 Who doesn’t recognize this one? Only this time, the young lady adds another silhouette to the image: her own. It’s either distracting, or funny, or a bit of both. 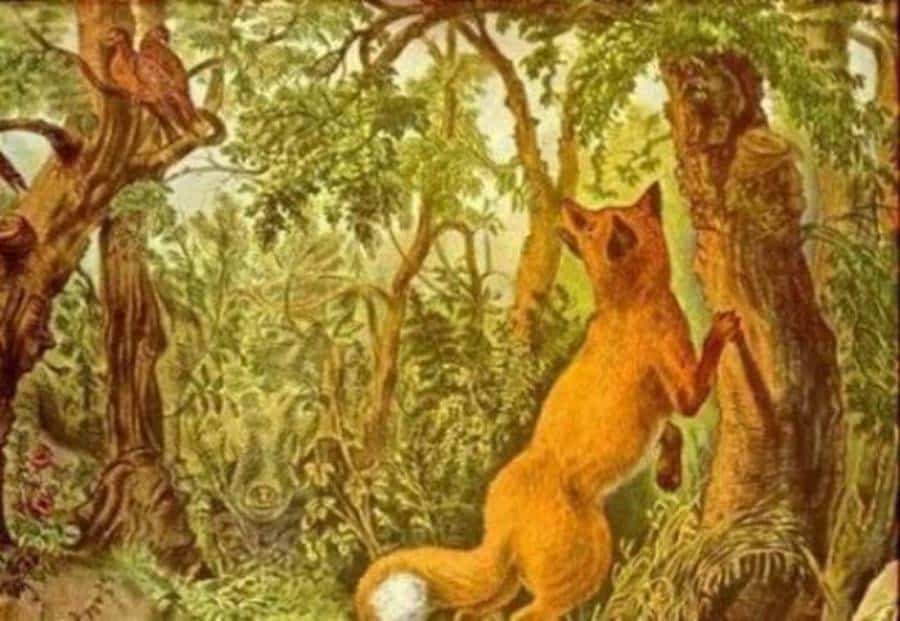 At first glance, you think “where’s the illusion?” But look a bit harder — it’s a find-the-animals game. There’s a badger, for sure, but are there others you can find? 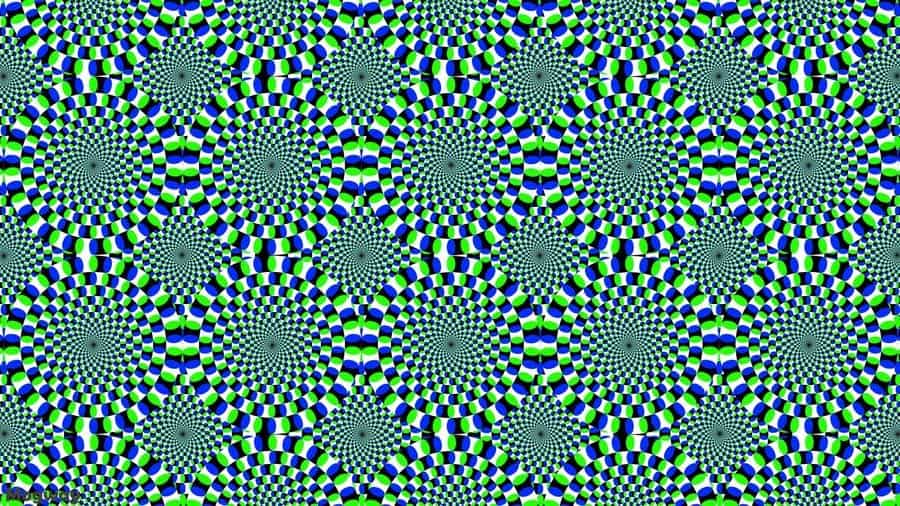 Just try to look at the image without “seeing” the circles and stripes move. This kind of illusion is a classic that anyone can stare at for at least a good ten minutes or so. 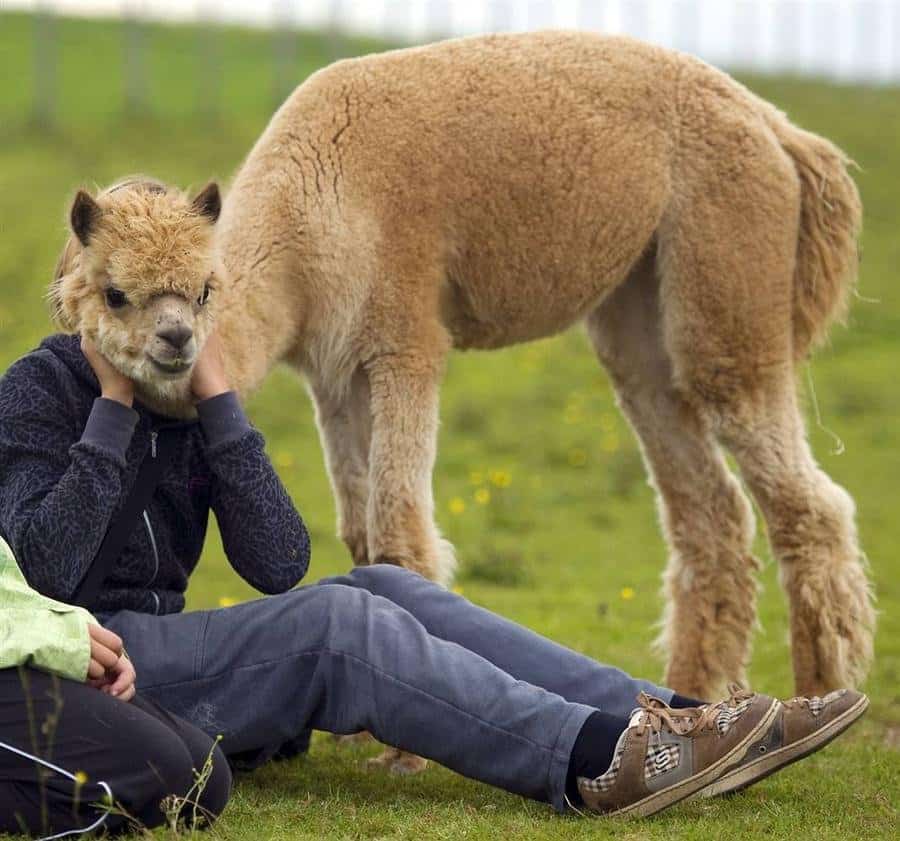 Apart from the fact that we know the person’s hiding behind the llama head, it’s still funny as anything. 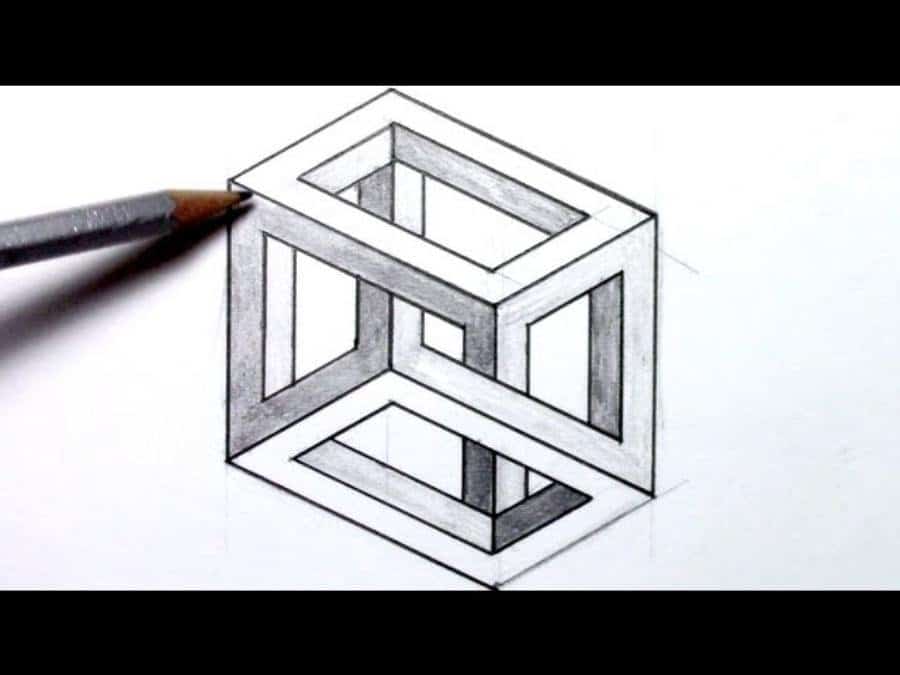 It’s tough to think of an illusionary artist without bringing up MC Escher’s style, recreated here near-perfectly. Just try and follow the lines around. 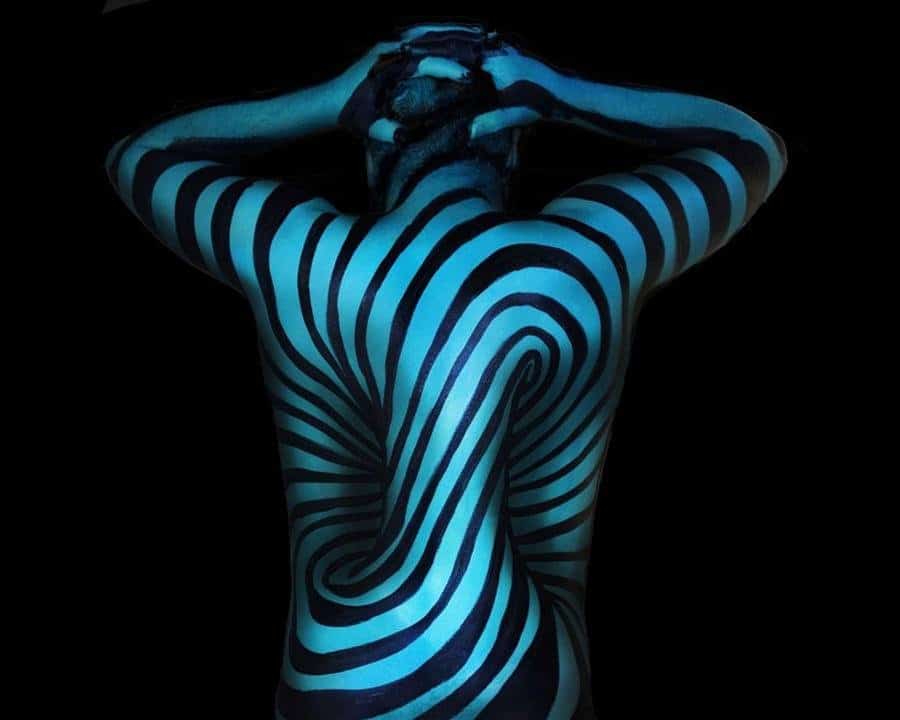 Surely this person didn’t get blue and black stripes in a mobius-style tattoo. Because yes, that would be just ridiculous. It’s more than likely Photoshopped, but it’s still a freaky-looking design nevertheless. 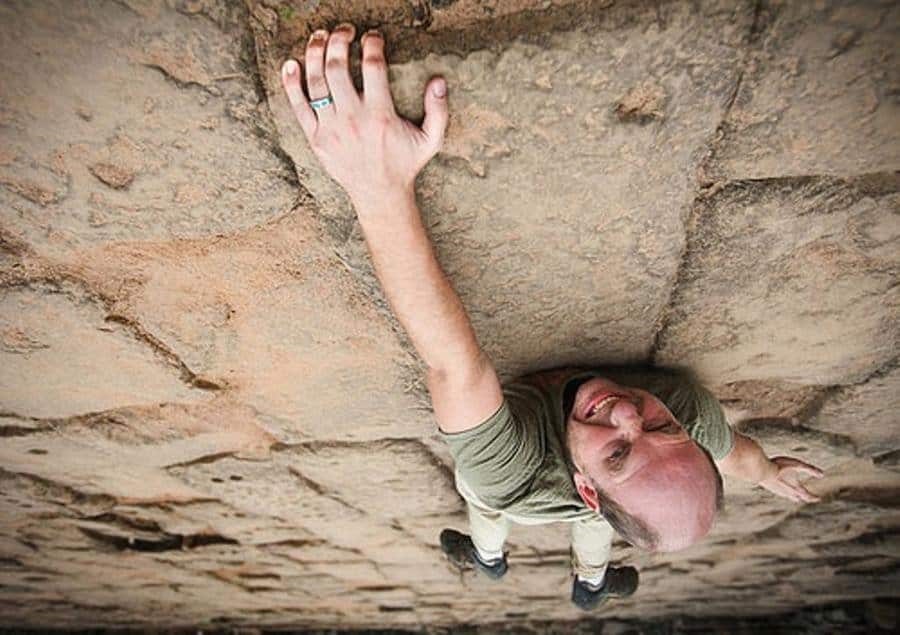 It kind of looks like his arm is stretching out just by the way he’s hanging there, doesn’t it? If we didn’t know better, you could say “Gumby lives, and he’s human!”

Past Within the Present 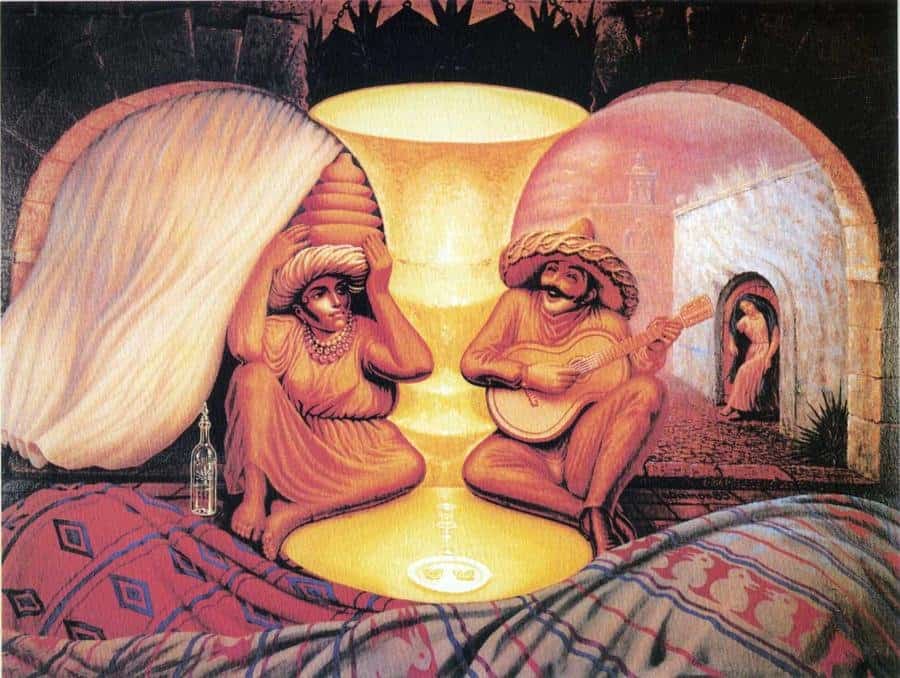 This is a rather interesting take on the old face-silhouette-or-vase concept, drawing the two old people’s pasts on their faces—giving you the impression they’re an old married couple.

Is The Pipe Over The Horizon? 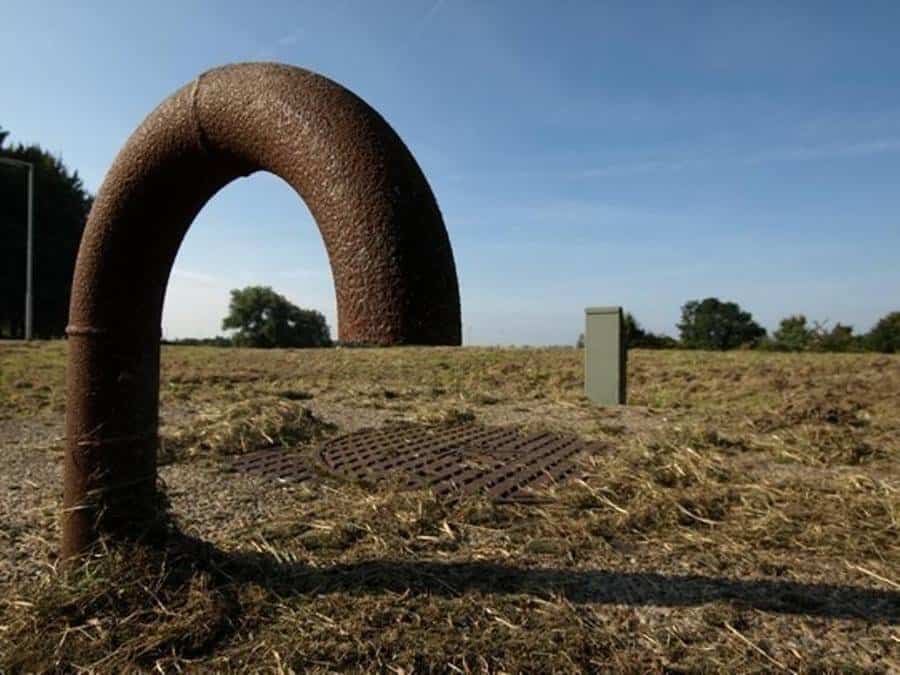 Definitely a “What-the-heck?” type of illusion that will have you staring for quite a few minutes. 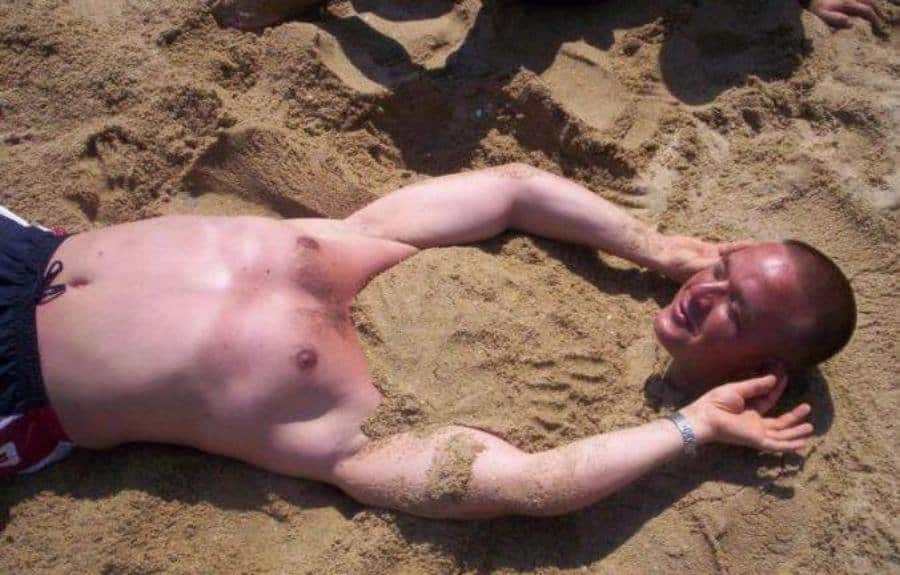 Just look at the image, think about it and you’ll see what’s going on. After you freak out for a couple of seconds, that is. 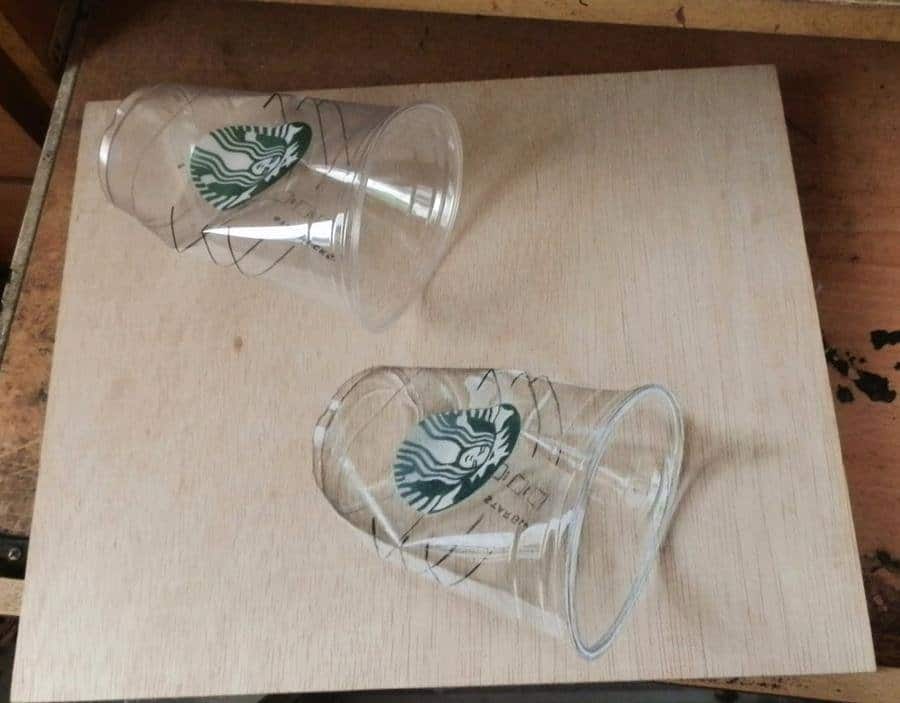 This is the toughest of all the illusions to see. Get really close to the image, then shift your eyes back and forth. One “siren” looks like she’s got her eyes open, and the other one looks like she has her eyes closed.

The Eye Fools You 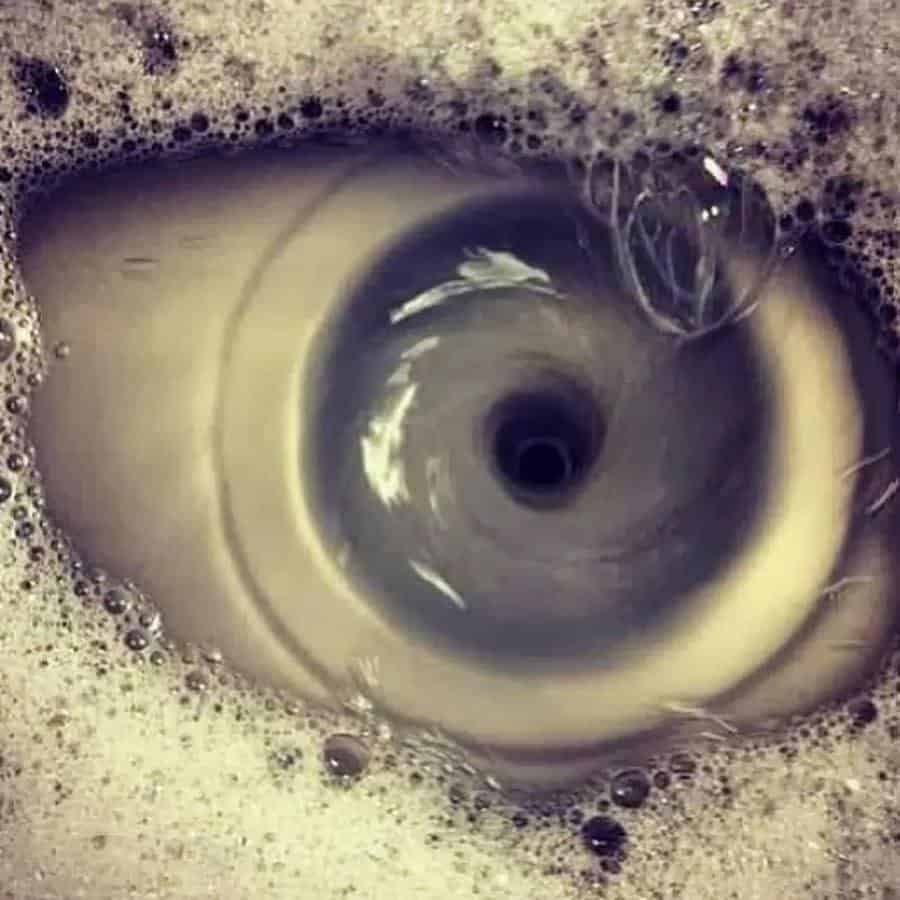 The phrase “trompe l’oeil” in French means “fool the eye.” Well, it looks like this eye in the drain has that down pat.

The Long Arm of the Lunch Table 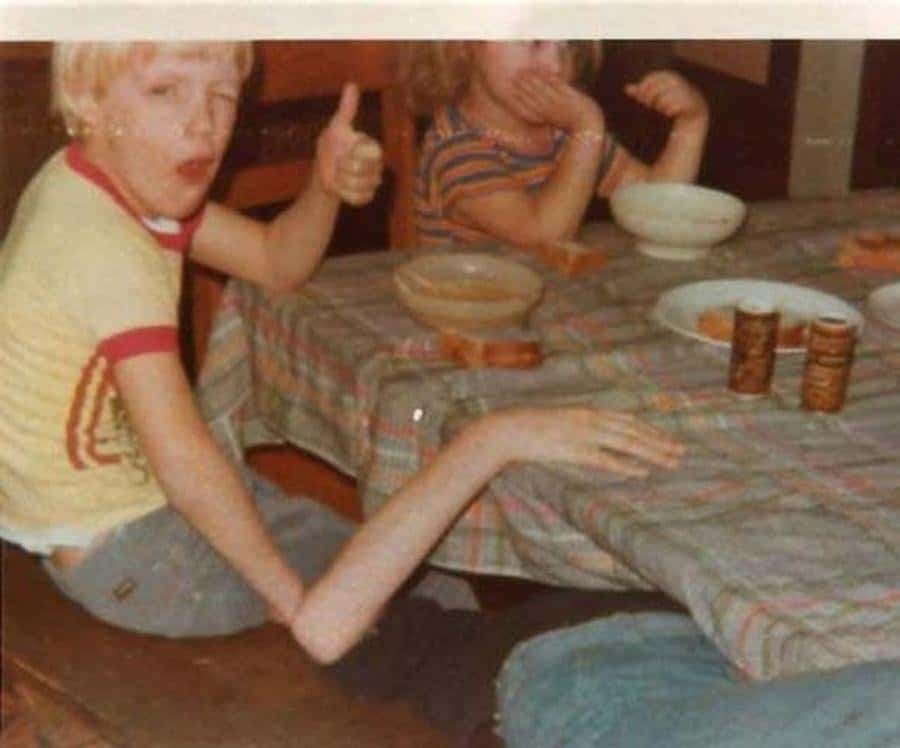 Is this kid for real? Is he related to that long skinny-armed alien at the end of “Close Encounters of the Third Kind?” Or is that someone else’s arm that’s butted up against his in a convenient limb placement? 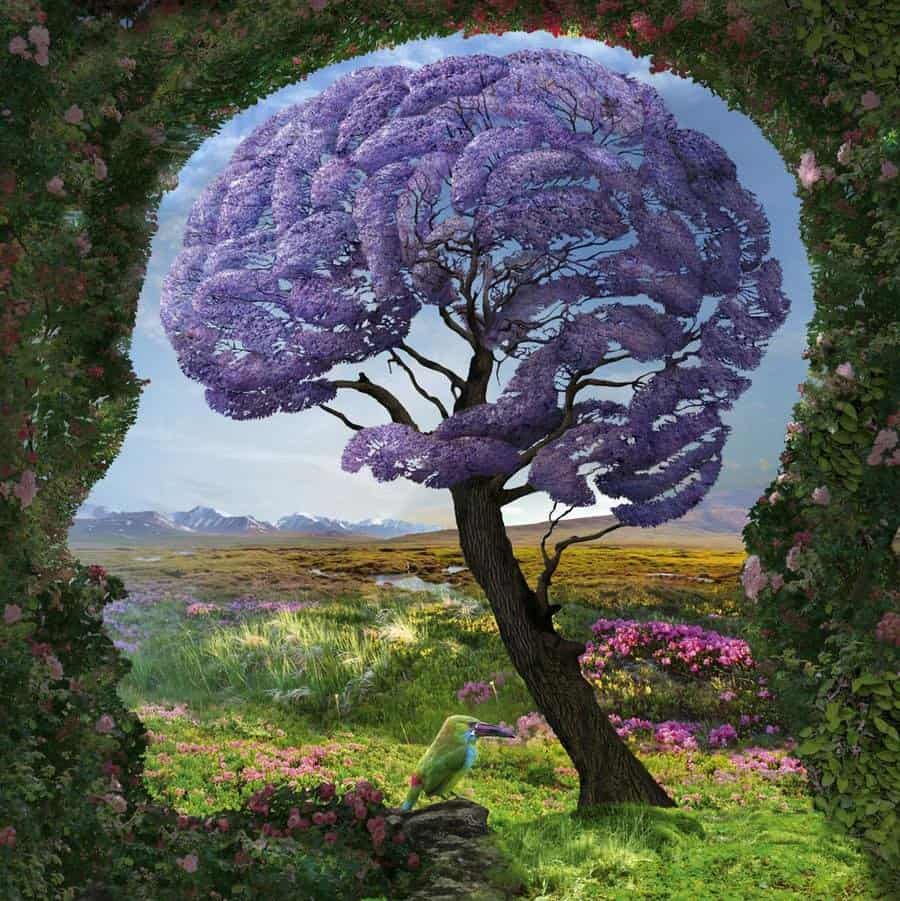 At first you think it’s just a silhouette of a face with a nature picture in the background, but then you pull back and you realize the tree looks like a brain in the top of the silhouette’s head.

Upside Down, Right-Side Up 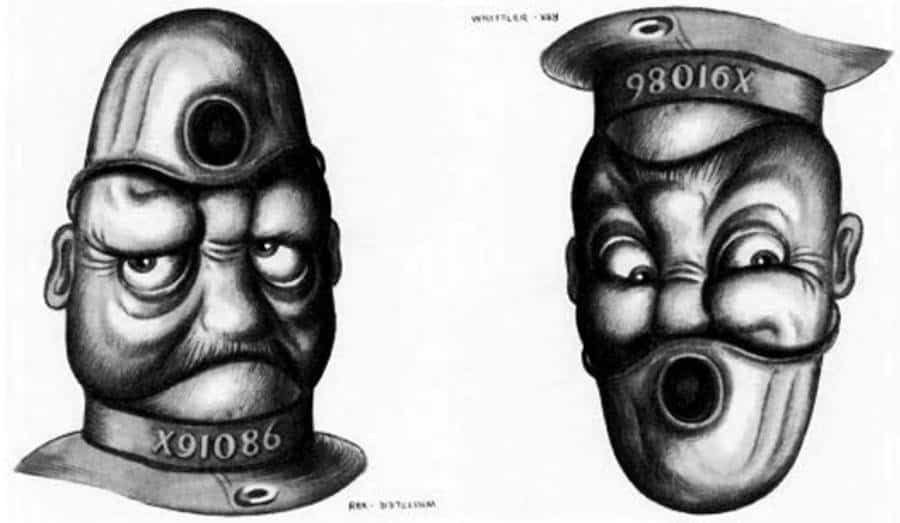 Is it a criminal with a big hole in his head and his criminal number under his face—or is it a really surprised cop? You decide.