We’ve all seen tattoos, or to use the politically correct term, “body art.” Some of it’s astonishingly beautiful, and some of it’s just freaky as anything imaginable. Other times, it’s downright funny. Here is a top twenty list of some of the most funny and shocking tattoos many of us could ever imagine—from tattoos on heads and a full body x-ray tattoo, to a tribute to “Lord of the Rings” in a rather odd place. 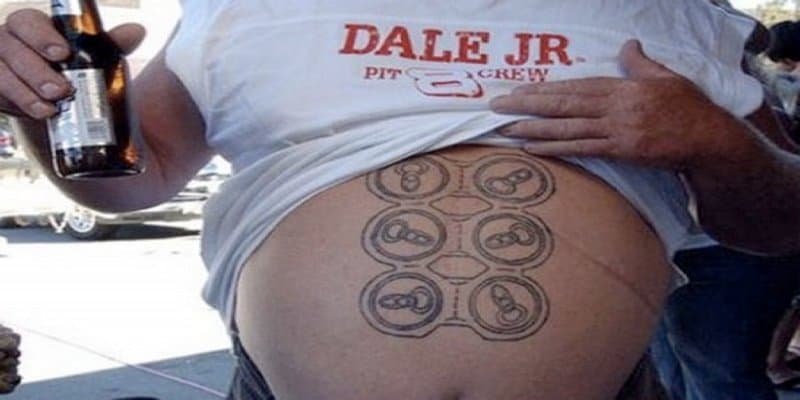 He said he wanted to show off his six-pack. But who’d have thought he meant a tattoo of a six-pack of beer? And that’s one six-pack he can’t drink.

Not Just Eyes, But a Whole Face… 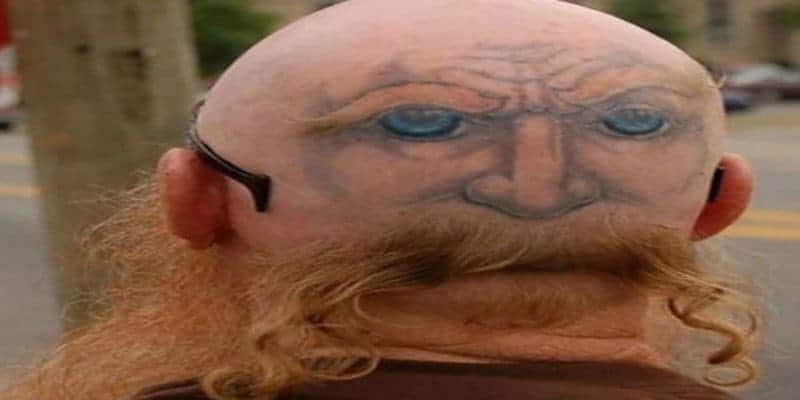 You know how adults say “I have eyes in the back of my head”? Well this adult’s saying it right now, complete with tufts of hair that look like a mustache. I bet no little kid’s going to be stealing out from under his nose. 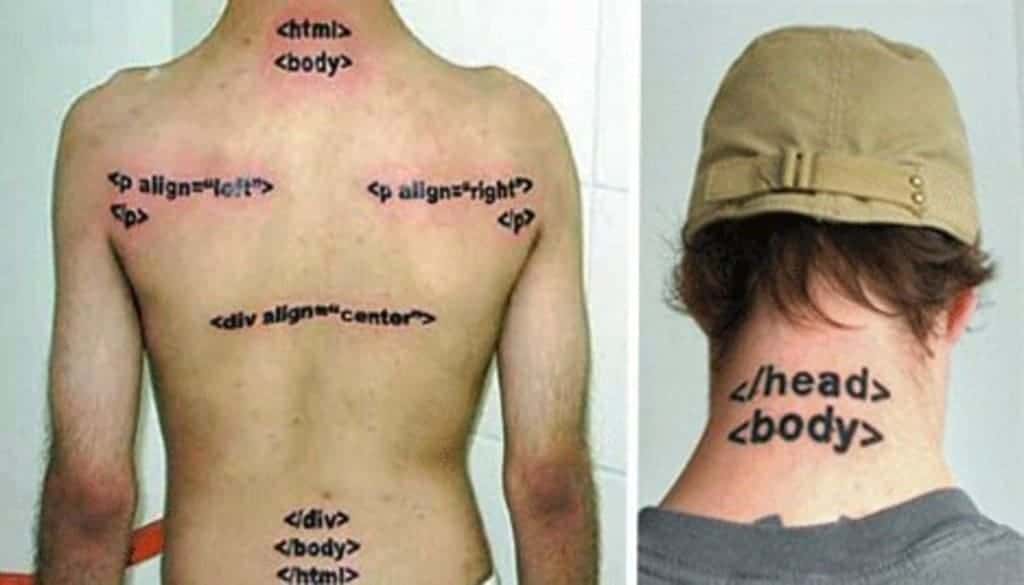 This is one heck of a mnemonic device for learning to code. I bet he won’t be forgetting that order of code tags any time soon.

Monkey On His Back 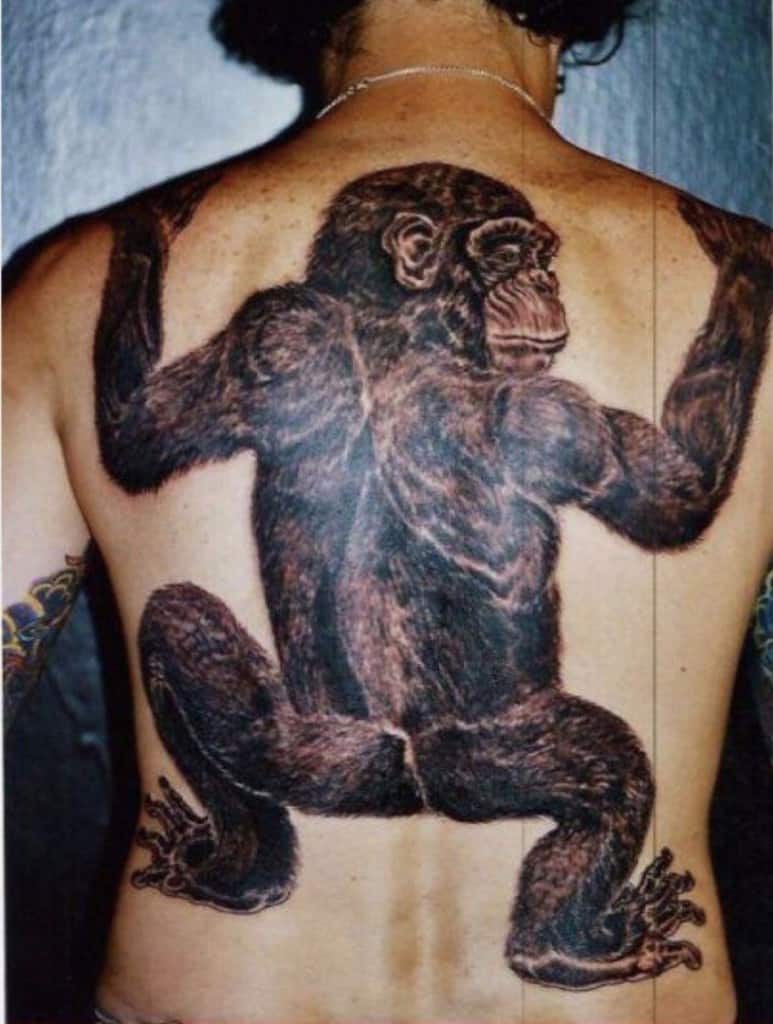 Such a man with a burden surely must be sympathetic to the rest of us who have more metaphorical monkies on our backs. Only his misfortune is, he’ll never get that monkey off his back. It’s there to stay, written, er, drawn in i

Jesus is Doing the Cooking Tonight 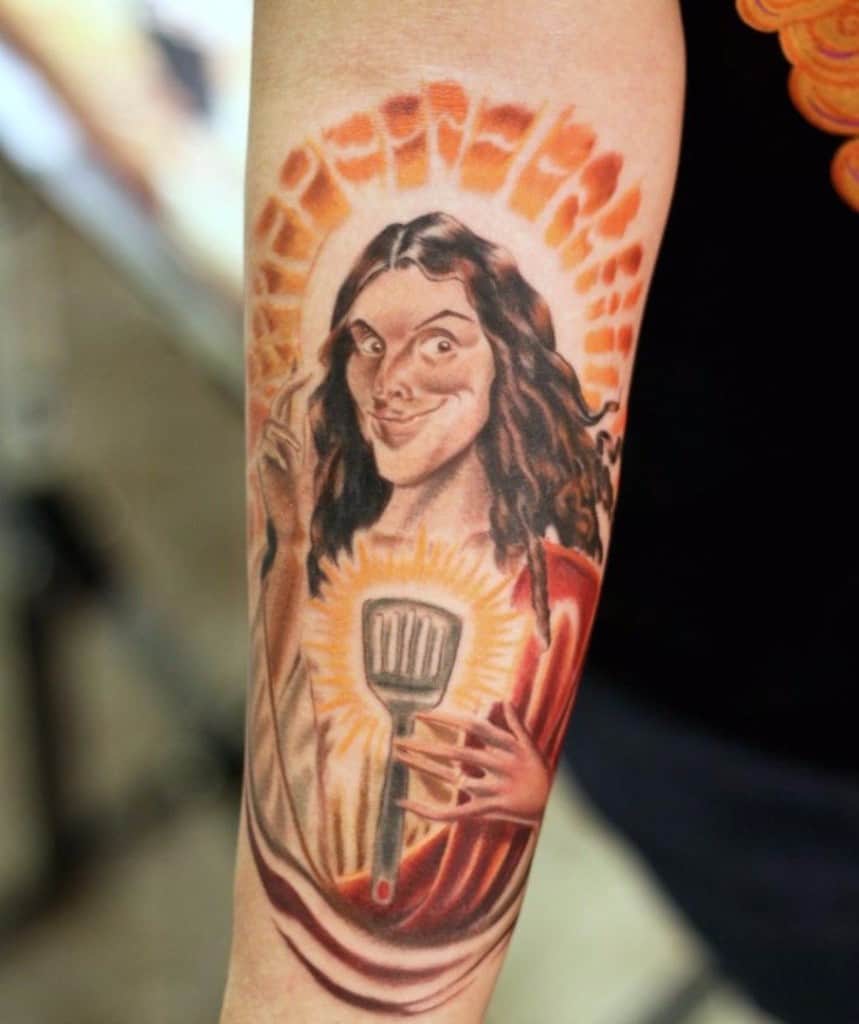 Gather ’round the table and prepare to stuff yourselves, because Jesus is apparently conjuring up a miraculous dinner. Forget the loaves and fish—he’s blessing the spatula to give everyone the holiest pancakes ever. 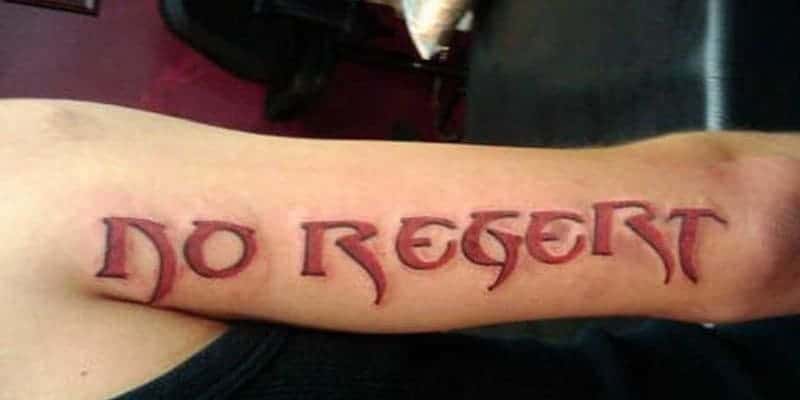 Hmm, is he thinking how much regret he has, now that the tattoo is done? Too bad the tattoo needle holders don’t come with spell-check, because it makes it sound like the first part of the word “regurgitate,” only spelled differently. 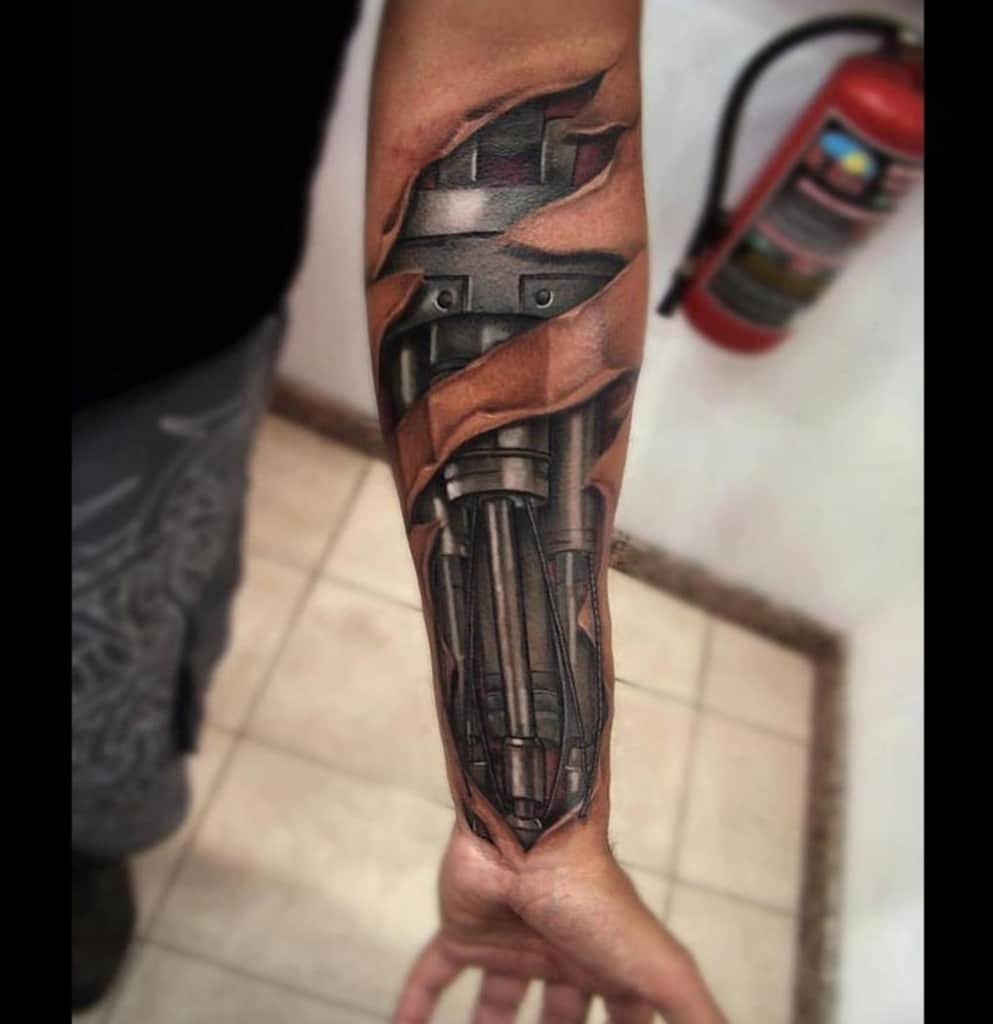 Is this what we’d look like if all of us had robotic arms like this? It’d be body modification in a very extreme sense. 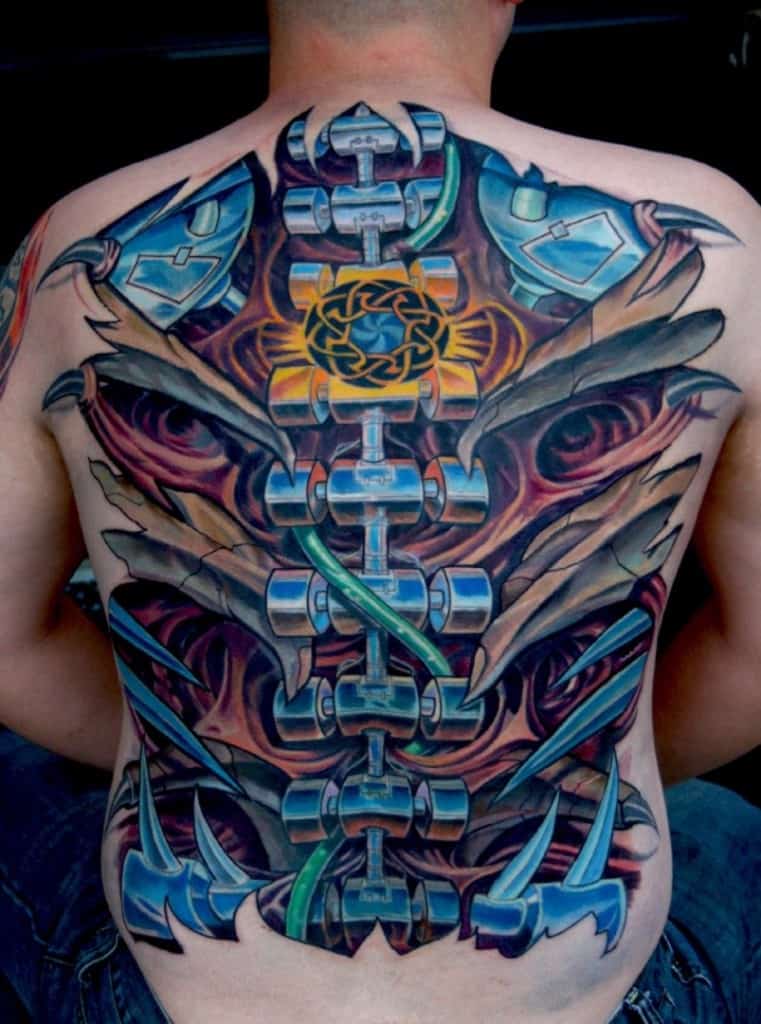 …or would this be even more extreme? This could easily make you think of the “Matrix” movies or something. Can you just imagine how long it took to create this? 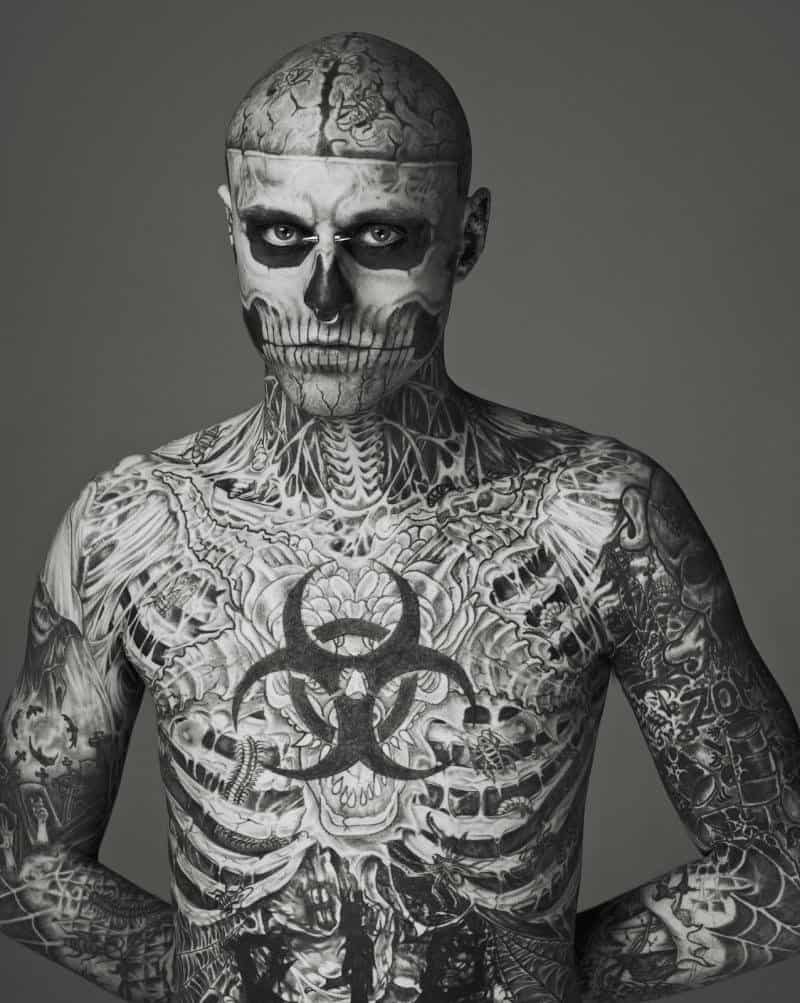 I wonder if the tattoo artist was studying x-rays in his spare time, because this art is shockingly realistic. All I know is, to get that fine detail with a tattoo needle means the guy getting the tattoo had to have been paid quite a bit of money for that job.

“Blue Man”…But Not In a Group 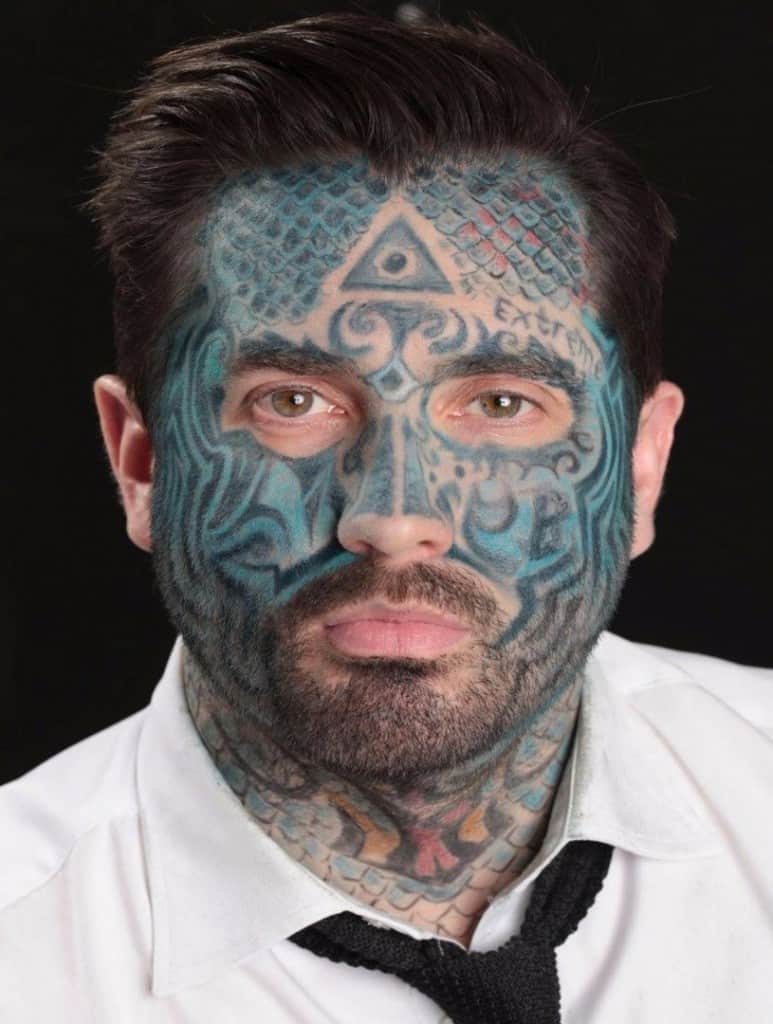 Some days you just have to wonder just what some people might be thinking. At least he can pretend he’s part of the “Blue Man Group” and start banging around on some weird instruments. 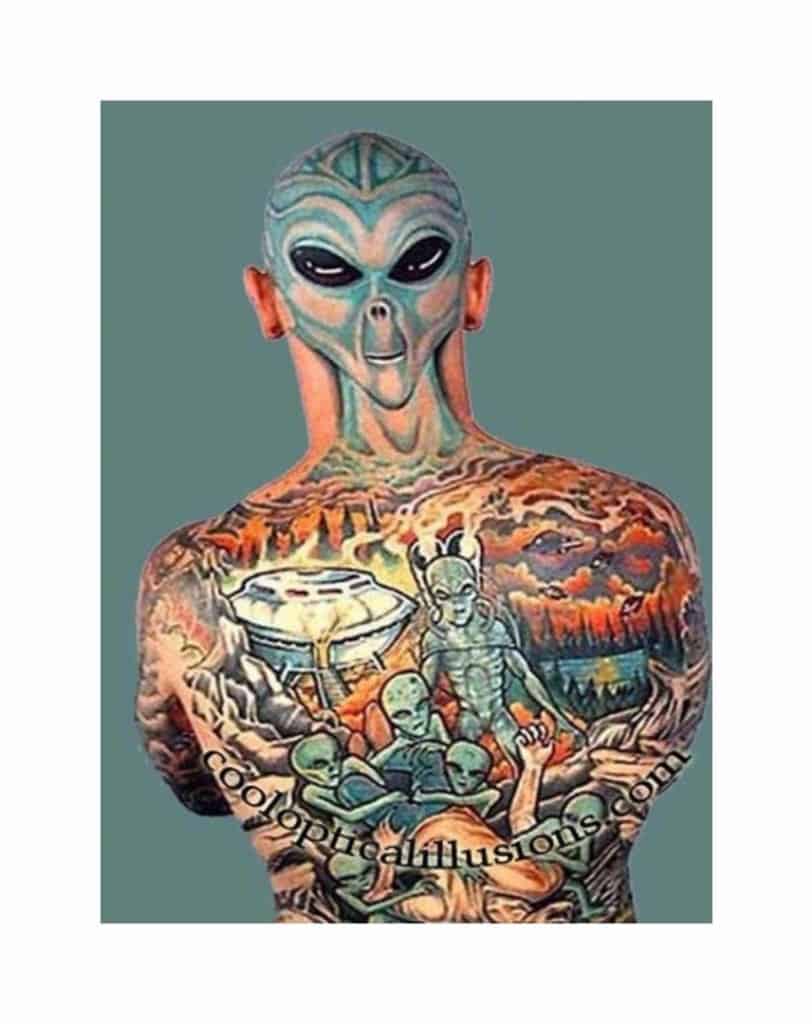 This person’s apparently a true believer, and always sided with Fox Mulder. No one’s going to pull a “Dana Scully” on him. He’ll just show them this tattoo. But I wonder if he thinks he’ll be able to get into Area 51 with it. 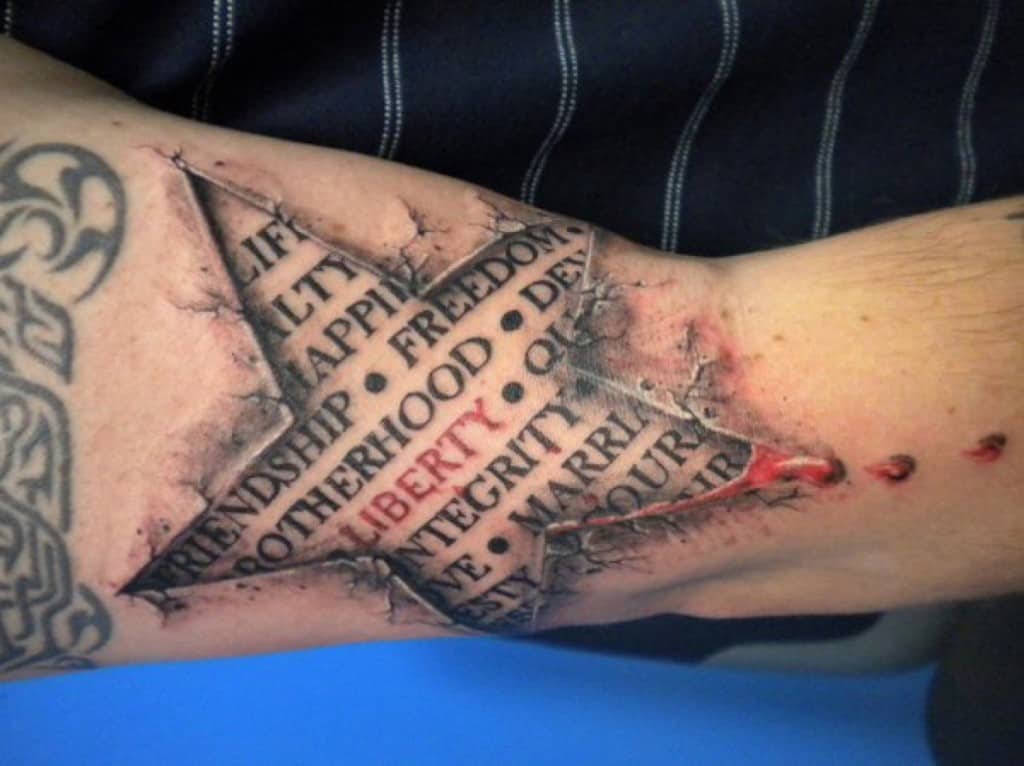 Whoever has this tattoo is extremely patient and brave to have all that intricate shadowing done. And to make it look like there’s another layer of skin underneath with all the inspiring words in it? It’s truly out of this world, and very shocking and cool when you first look at it. 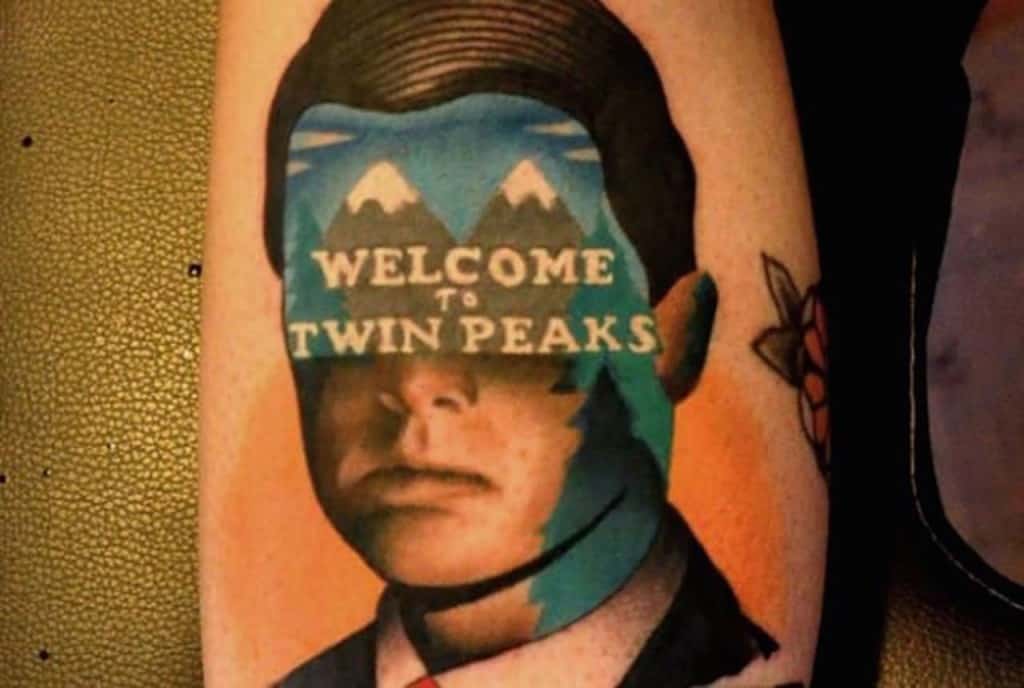 Someone is clearly a fan enough of David Lynch’s old show to incorporate the “Twin Peaks” sign with the rest of the image painted like Agent Dale Cooper. This one’s included just because “Twin Peaks” is the closest thing to an “indie” show that network TV has ever had. 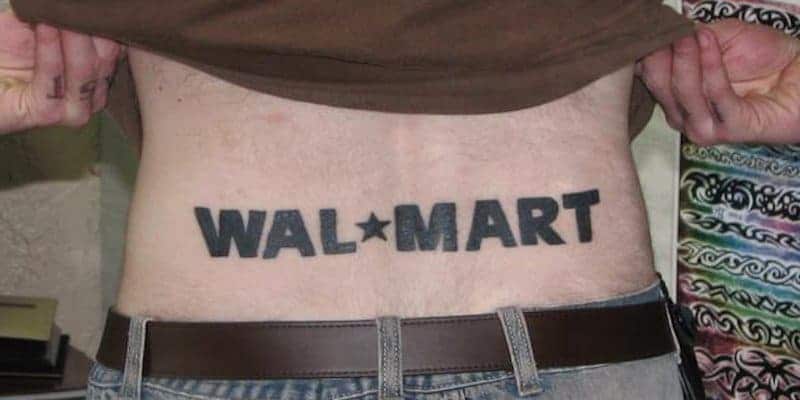 Okay, I can see having a certain level of appreciation for a store that’s open 24/7, even when every other business is closed, but I had to do a double-take. I would wager this person’s showing a lot of support if he’s going to great lengths to have this tattooed on his back. 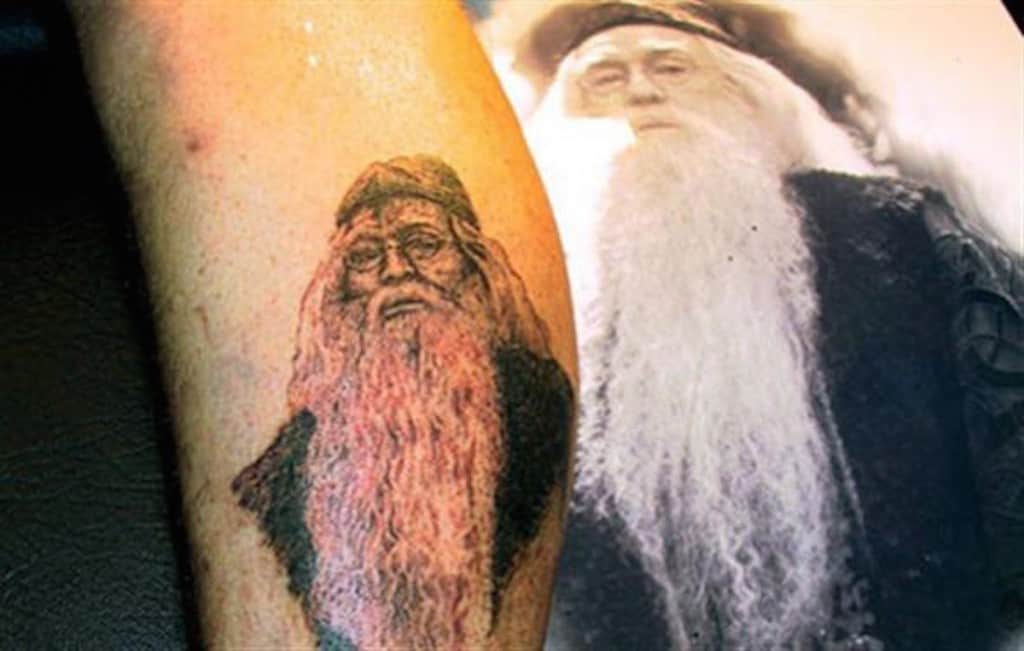 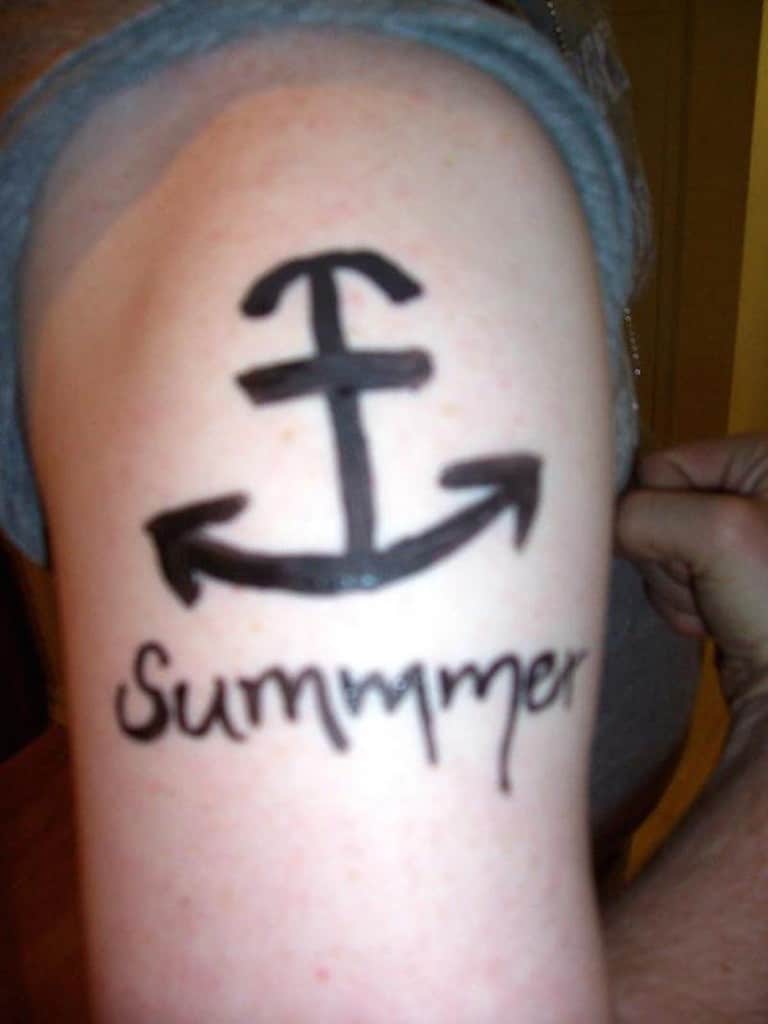 Yet another misspelling mishap. But perhaps this is something of a truth: the tattoo artist maybe really did put the “Mmm” in “Summer” by thinking of something summer-related. Either way, his brain drifted from his task and now look what happened. 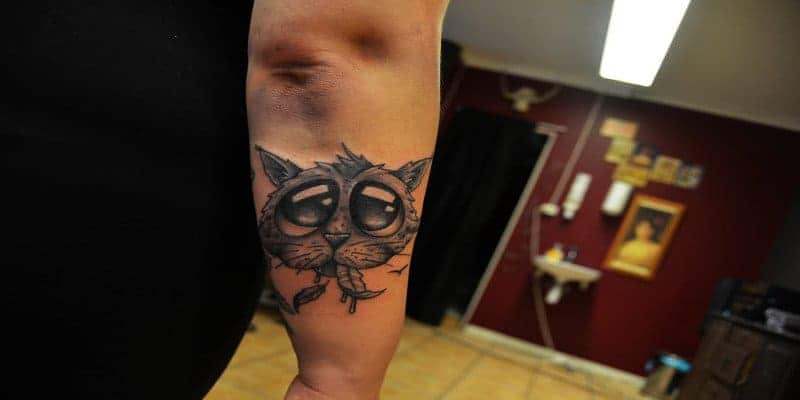 This is truly one of the funniest cat tattoos out there. Of course, who doesn’t love the look of a cat with a feather hanging out of its mouth, looking adorably suspicious and making you think he had “nommed” more than one “plume”? 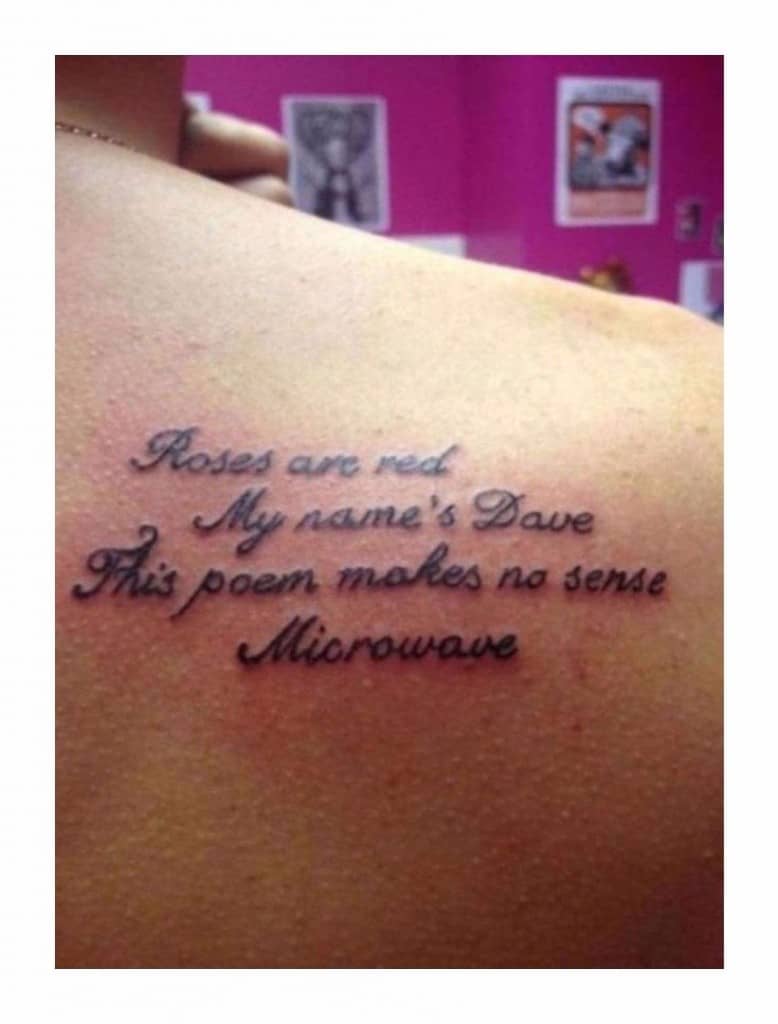 At least within the poem, the man named Dave had the good sense to admit that while the words rhymed, there was no logic to his words. Perhaps he was trying to blend iambic pentameter with the zen nature of haiku. Or perhaps he was thinking about food. 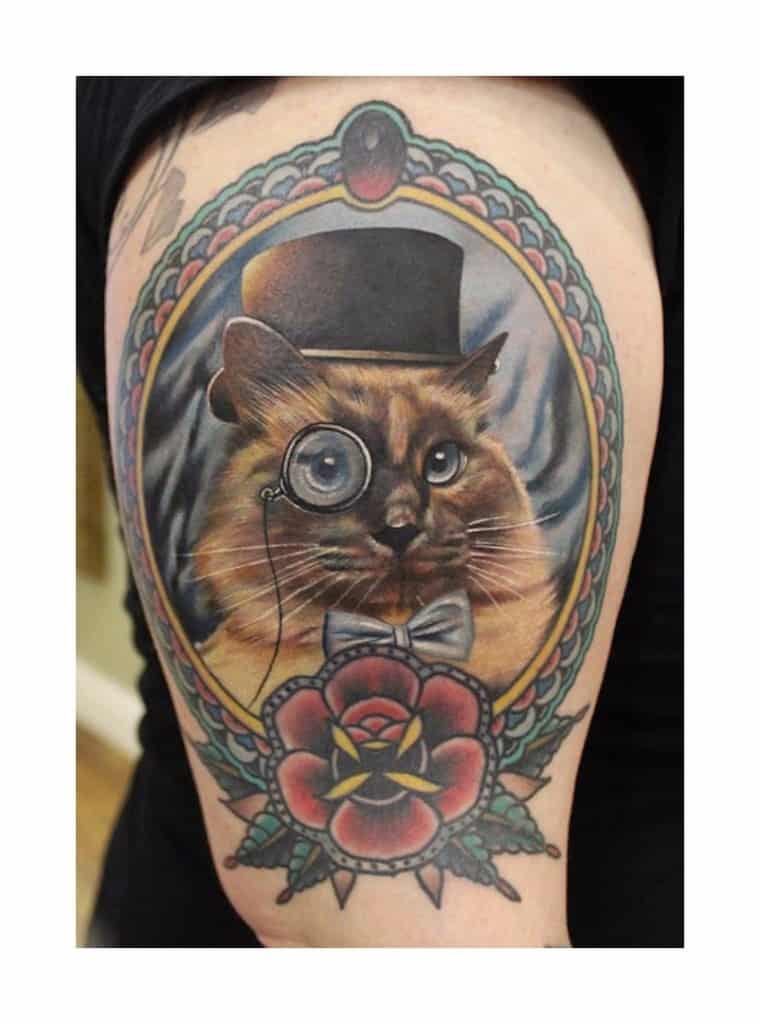 So, who’s all up for getting tattoos and feeding our “sophisti-cat-ed” feline friends some fancy cat food? The monocle says it all: this cat’s no “9 Lives” cat. He wants “Fancy Feast,” and he wants it now, er, meow.

“One Ring…to Rule Them All” 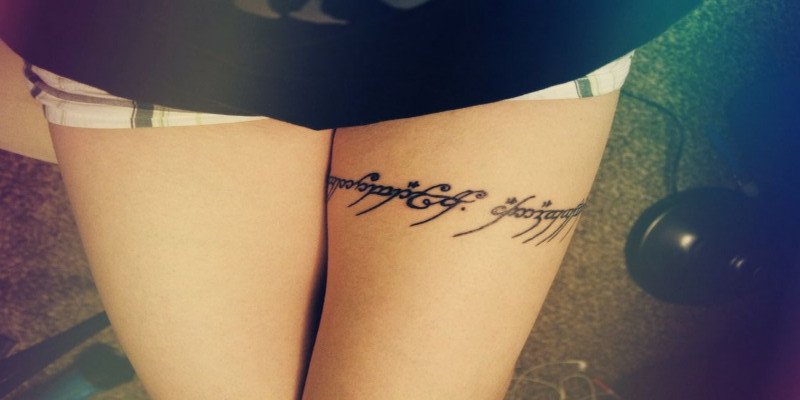 Or is it—one intricate tattoo to rule them all? Imagine, the writing on the “One Ring” around your thigh. One of these days, a near-sighted guy might mistake that for a garter or something and try to pull it off.