20 Creepy Easter Bunnies That Will Terrify You

With Easter just passed, we have all seen the Easter Bunny taking up residence at our local shopping mall. We went and got pictures with the Easter Bunny as kids and now we take our kids to do the same thing today. Despite wanting that basket from them and all the candy inside of it, some kids seem terrified of the Easter Bunny and we found some photos justifying their fears! Check out these Easter Bunnies that are so creepy, you wouldn’t let your kid sit on their laps.

She Is Not Happy 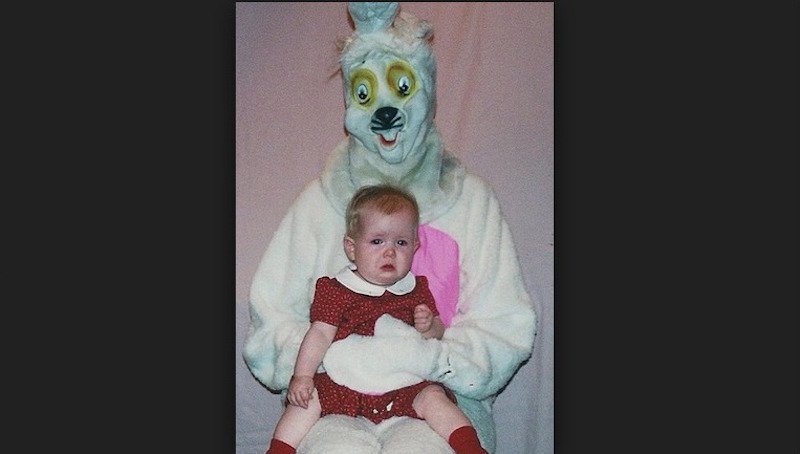 We would not be happy either, as that bunny looks creepy. The eyes and their attempt at making whiskers are just terrible. 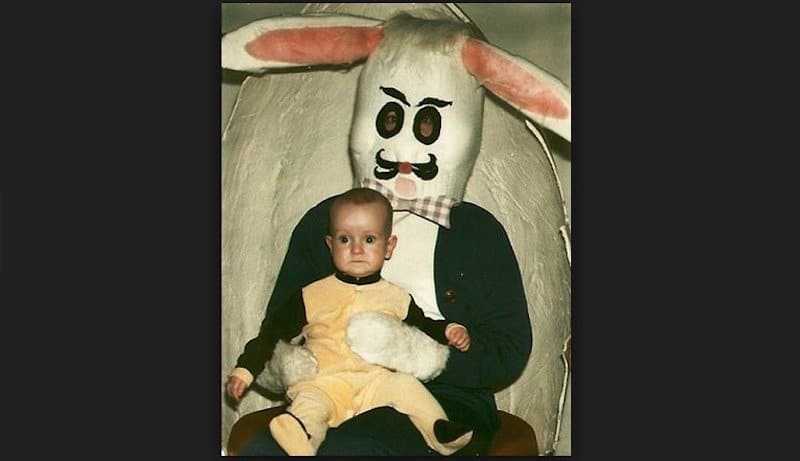 While most ears on bunnies point upwards, this bunny went with the sideways look. Add in those creepy eyebrows and we have a winner here for Creepiest Easter Bunny of the Year! 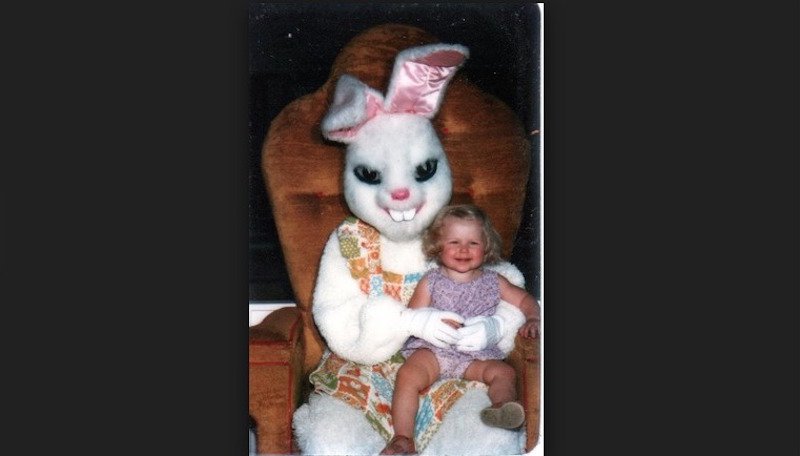 While the little girl seems happy to be sitting on the Easter Bunny’s lap, she probably hasn’t realized that he is one of the creepiest looking Easter bunnies out there.

An Oldie, But A Goodie 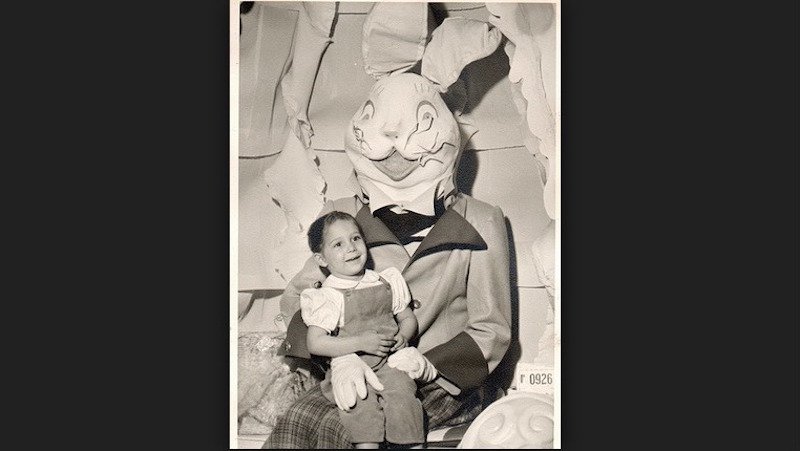 We went vintage with this one, and it shows that creepy Easter bunnies aren’t a recent thing… that poorly designed headpiece looks like something out of a horror film. 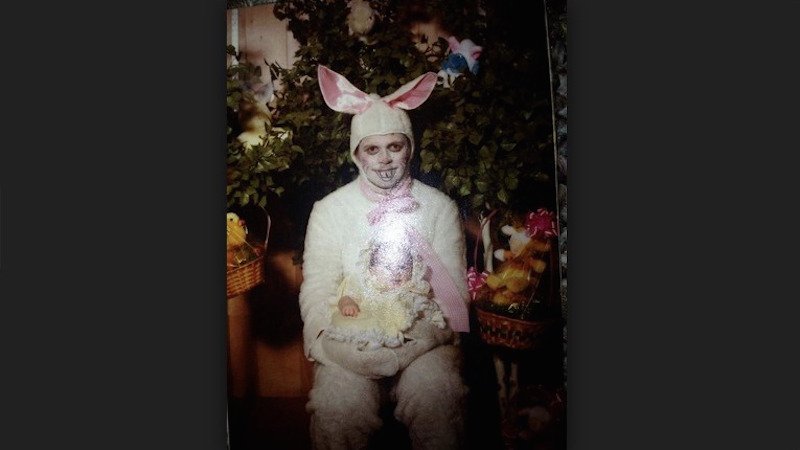 The look on that Easter Bunny’s face makes us think they are going to walk away with the baby and never look back. No parent should allow their baby to be held by that thing!

This person went into their closet (or their local thrift store) and just grabbed whatever looked good and threw it together to make an Easter Bunny costume. That poor kid looks traumatized and was probably picked on for the remainder of the school year. 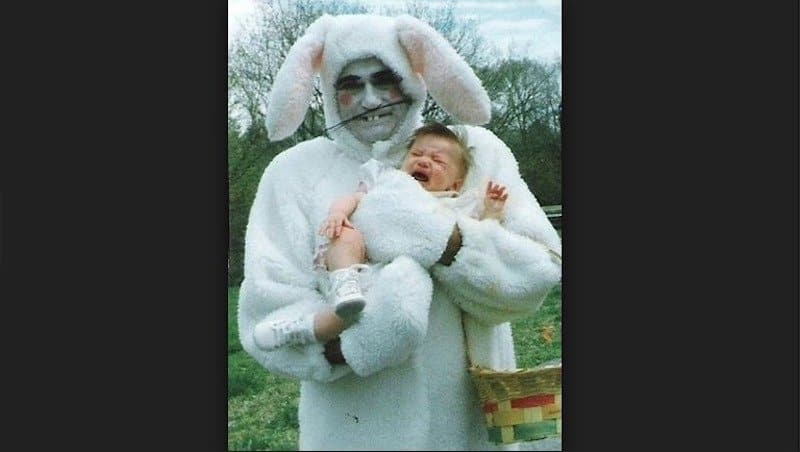 From the looks of it, this bunny is never going to let go of your child, despite their crying and attempts at getting away. If you look at those whiskers, it’s like they found a black straw and taped it on to complete their look. 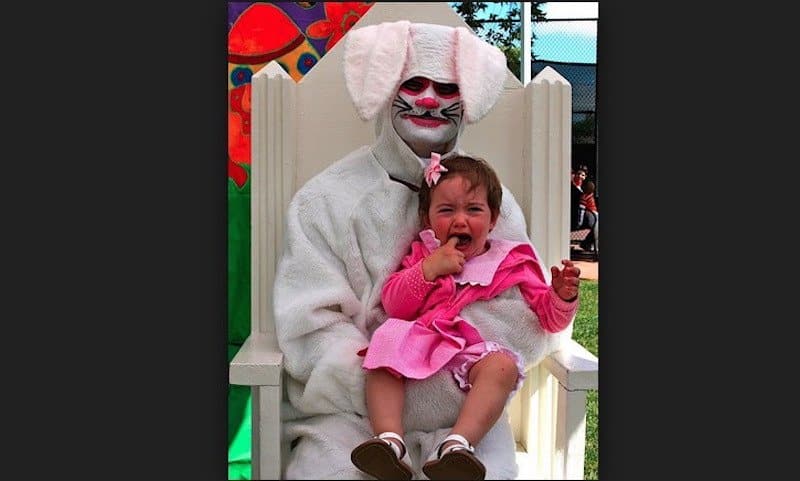 To be honest, the costume is not terrible. He could use a little work on perking up the ears, but the makeup is the scary part and the girl is definitely afraid. 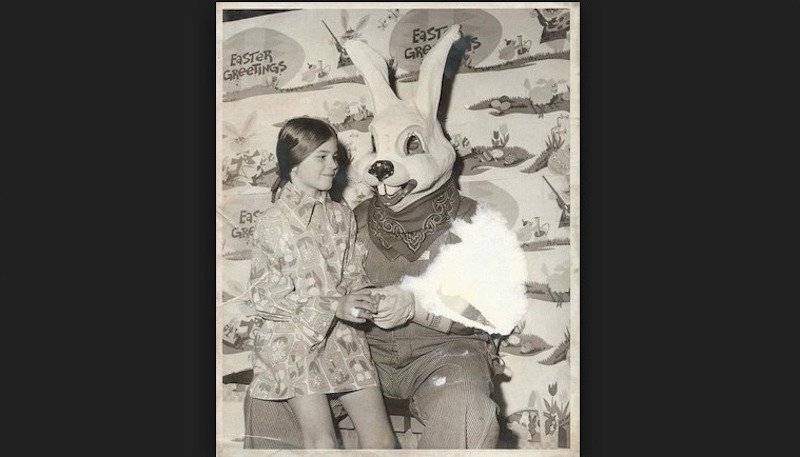 This bunny is old school and rocking that rabbit face, but what is up with the scarf and costume? It looks like a local railroad worker found a rabbit’s head and decided to dress up and scare some kids. 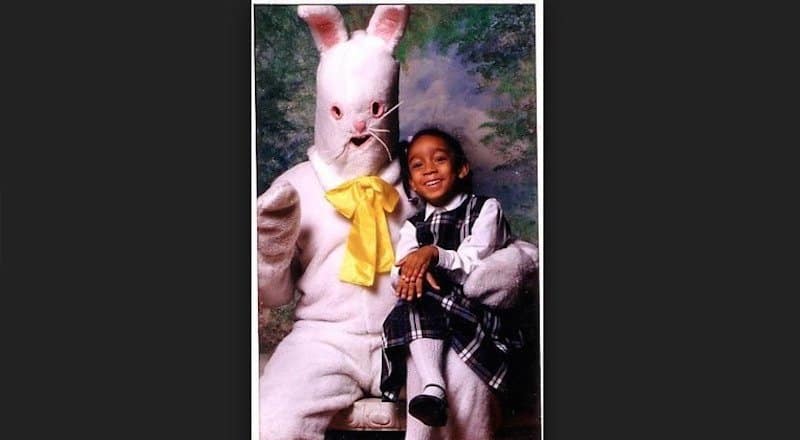 This girl is definitely not frightened by the rabbit holding her, but we are! If you look close enough and use your imagination, it kind of looks like they re-purposed a gladiators helmet for his mask. 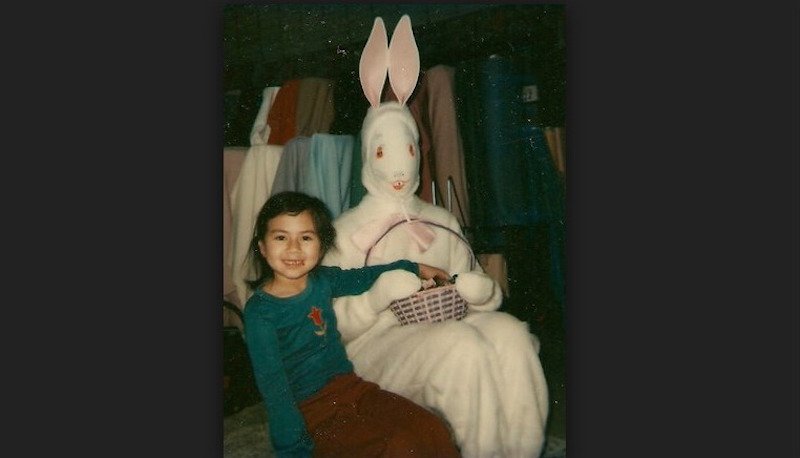 It looks like this Easter Bunny needs to put less candy in the baskets and eat some of it themselves. Their face looks so tiny and there is no room for the ears on top. Eat a Cadbury, man! 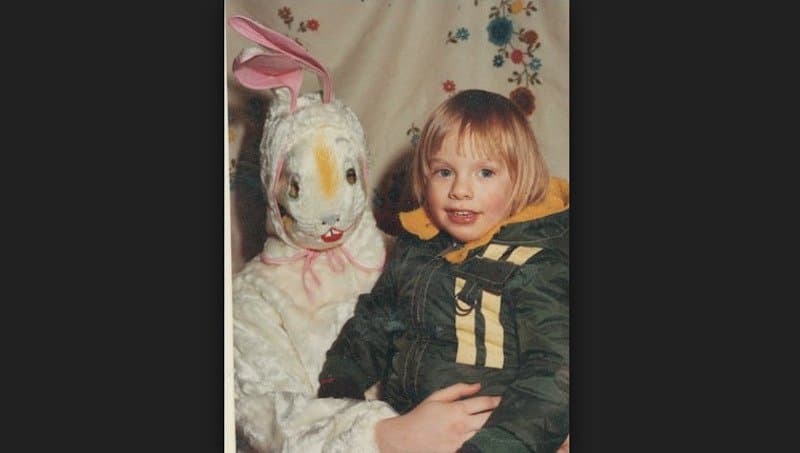 We look at this bunny and see shaving cream on top of their head, or maybe some whipped cream. Not sure what the yellow streak is between the eyes, but maybe a dog came up and peed on them! 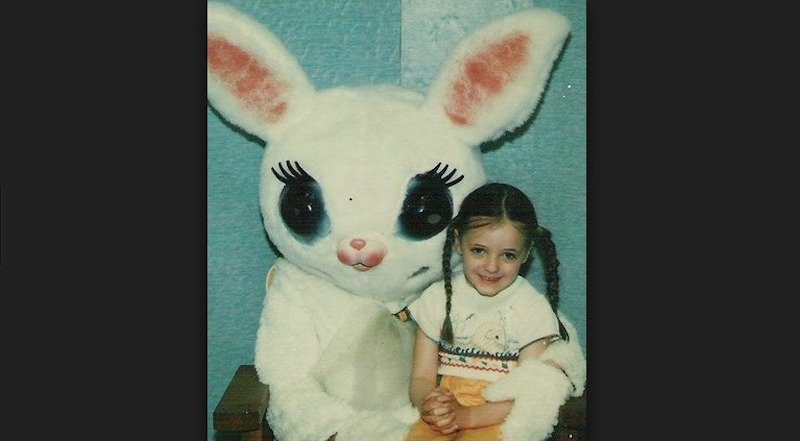 They were going for a sexy bunny with this one, but it failed big time. The eyes are so huge and they put too much mascara for those eyelashes, maybe they took some lessons from anime?

The Easter Bunny Smoked Something 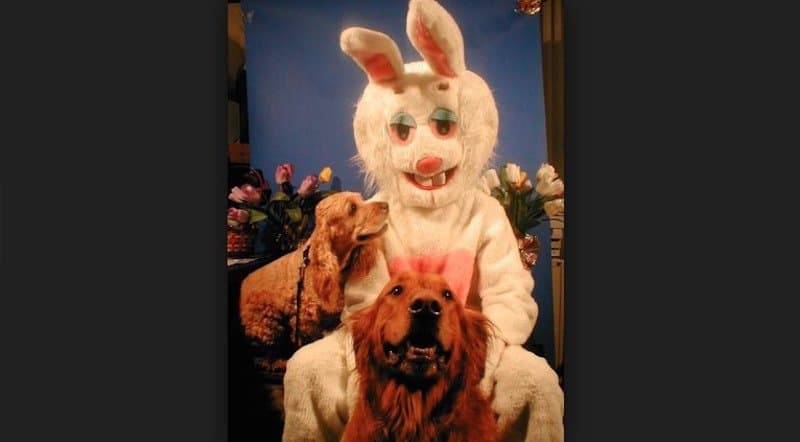 It looks like this Easter Bunny got a little high in order to make it through their shift of dealing with the dogs. The bunny must be pretty high, trying to ride a dog.

An Easter Bunny Or Bird? 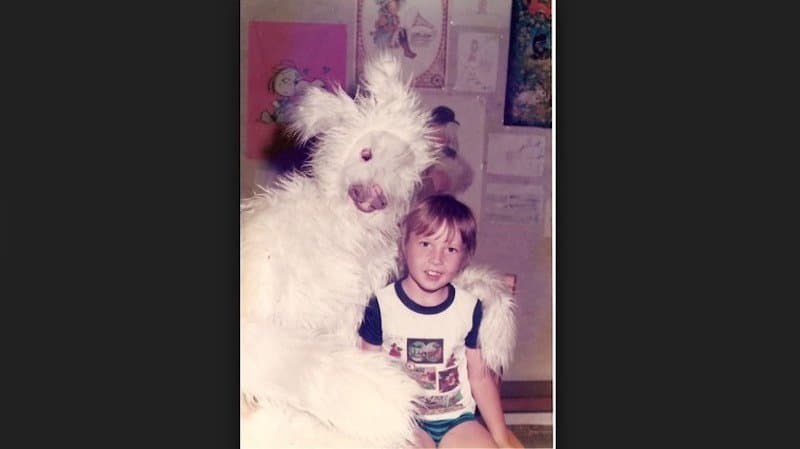 Is that an Easter Bunny or a bird? We do see something that is white and fluffy, but we don’t see a rabbit. The ears are a mess and we don’t even see a face on it, besides the one peeking out of the person wearing the costume. 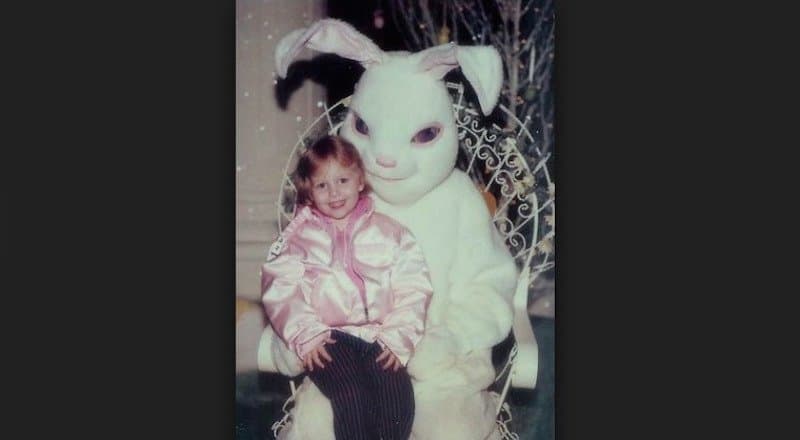 Kids see the best in people and things. We see an evil Easter Bunny here, but she sees a happy Easter Bunny and will gladly sit on their lap. It’s like a costume that one would wear at halloween. 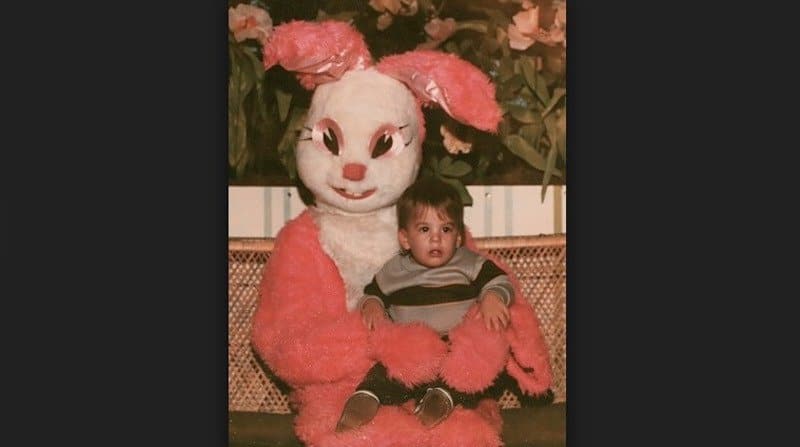 Not too sure where this Easter bunny got its inspiration, but we’ve never seen a red and white rabbit before. Maybe it was their first time doing the laundry and mixed colors? Nevertheless, it’s one creepy looking bunny. 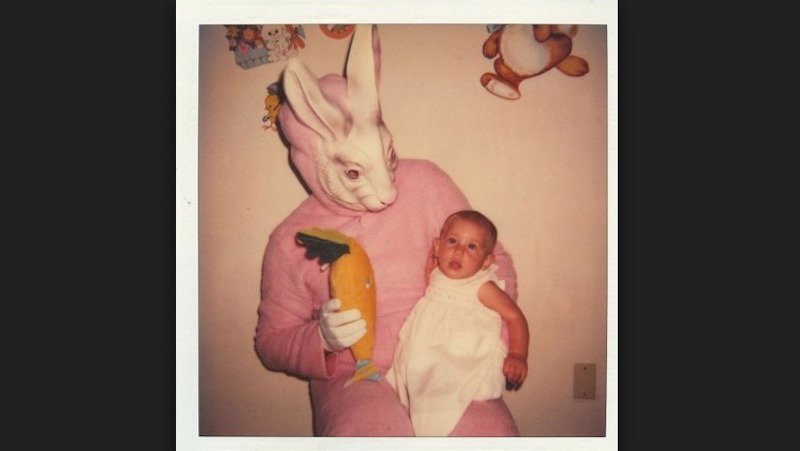 The face looks like an actual rabbit, but it also looks very creepy. Besides the fact that the bunny looks like they are holding a fish, why is he staring so intensely at the baby? Don’t do anything bad to that cute baby! 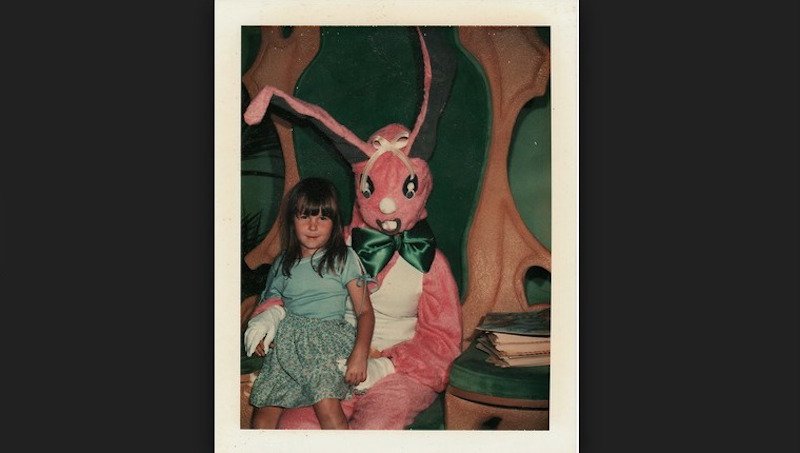 We’re not sure what kind of costume this ‘bunny’ was trying to pull off, but to us it looks like a pink and white ant. Have you ever heard of the Easter Ant? 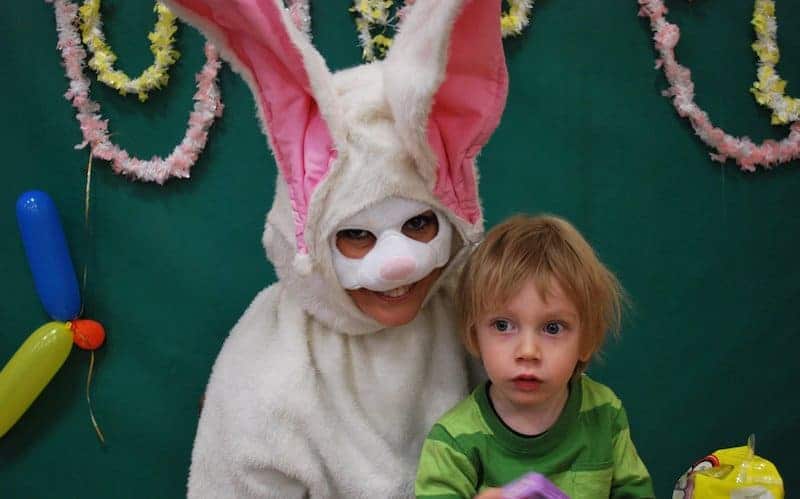 We all know that Santa watches us to know if we’ve been bad or good, but it’s a bit creepy that this Easter Bunny is doing it; we feel sorry for that poor child.