18 Awesome Pictures That Seamlessly Blend Paris’ Past And Present

Photographer Julien Knez recently put together a collection of images to celebrate the anniversary of the city’s liberation from Nazi control, which occurred in August 1944. Knez found old photos of Paris taken during the 1940’s and blended them with modern-day photos of the same locations. These images include many historical locations, and the sharp contrast between the past and present provides a strange, eerie nostalgia. In these images, the ghosts of the past seem on the verge of leaping out at the modern-day pedestrians. Check out the images for yourself, for they certainly convey a profound, palpable sense of time and history. 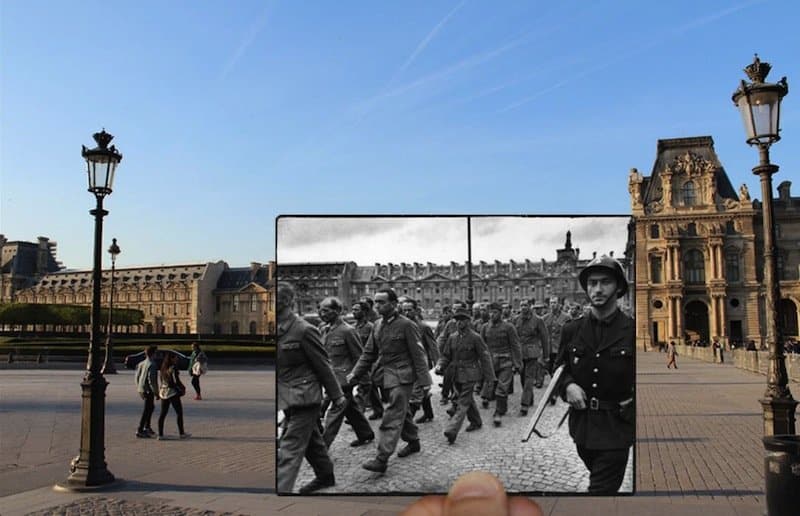 This photo of marching soldiers was taken before the Louvre. At the beginning of World War II, the most important pieces of art were removed from the famous museum, such as the Mona Lisa, and were sent to Château de Valençay. During the war, the famous museum remained nearly empty. 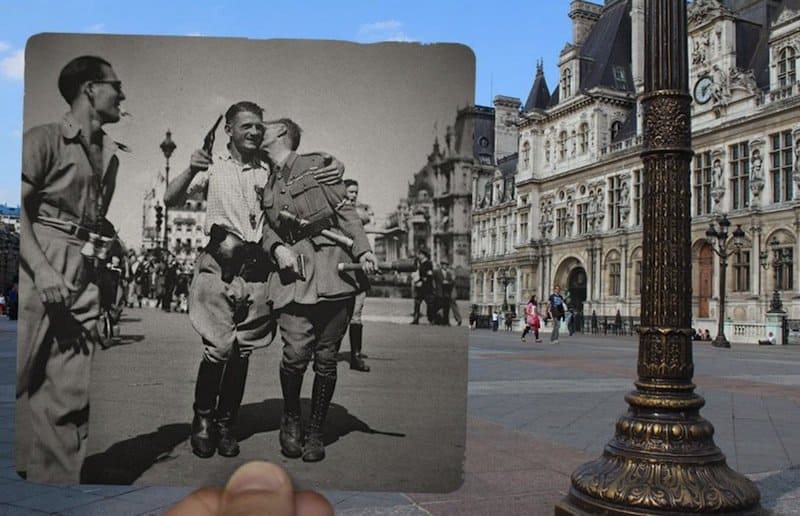 In this photo, soldiers celebrate after the liberation of Paris in front of the Hôtel de Ville, which is actually the location of the city’s main administration. Since the French Revolution, numerous historical events have taken place by it, such as the proclamation of the French Third Republic in 1870. 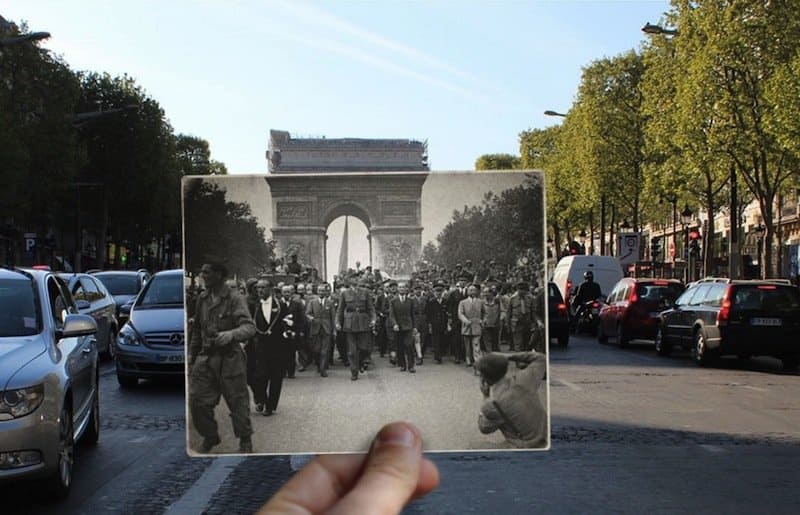 The Arc de Triomphe, an enormous arch situated near the Seine, is a famous monument in Paris. On the liberation of Paris, French forces, along with President Charles de Gaulle, held a parade that passed underneath the arch. 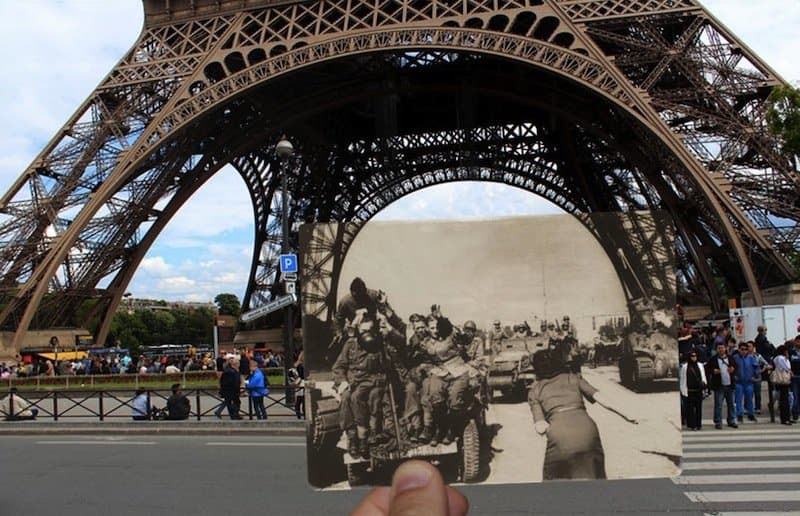 This photo was taken under the Eiffel Tower. At the beginning of the Nazi occupation of Paris, French people actually cut the tower’s lift cables. Nazi’s placed a giant “V” on the tower, along with a sign that translated to “Germany is victorious on all fronts”. 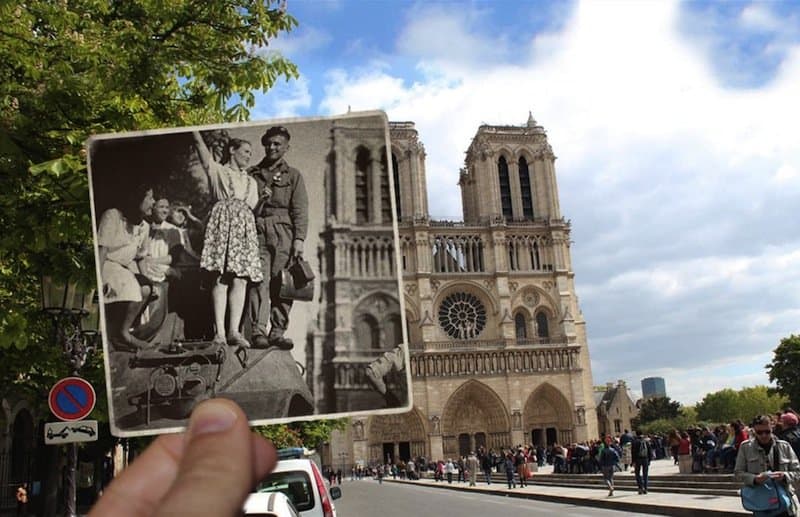 This is a photo taken in front of the Notre-Dame Cathedral, and was likely taken during the Te Deum Mass, which played in 1944 during the liberation of France. However, according to rumor, the Te Deum Mass was broken up by sniper fire. 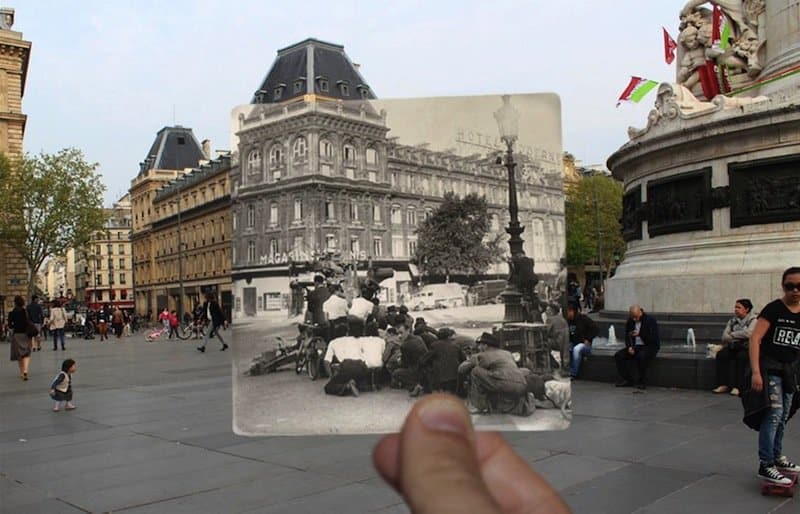 This square was named after the French Republic. During the Nazi occupation, German army-bands sometimes played music for the French people in the Place de la Republique. In this photo, however, it doesn’t look like the civilians are looking forward to any sort of festival. This photo is taken before a building on the Champs-Elysees, which is a boulevard renowned for its cafés, theaters and luxury shops. Upon the expulsion of the Nazis, an enormous parade passed along this boulevard to celebrate the important day. 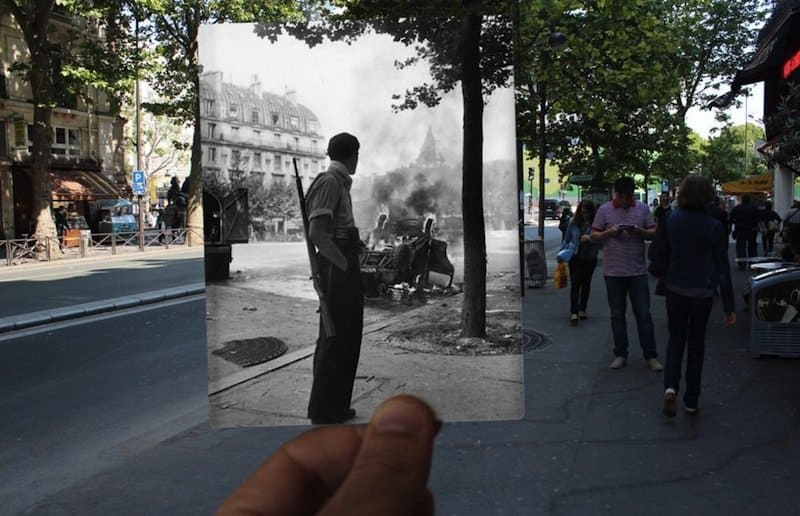 This picture of a man watching a burning car was taken in the Place Saint-Michel, which is a public square that has the famous monument of Fontaine Saint-Michel. The photo of the contemplative soldier provides a strange juxtaposition with the modern pedestrians attached to their mobile devices. 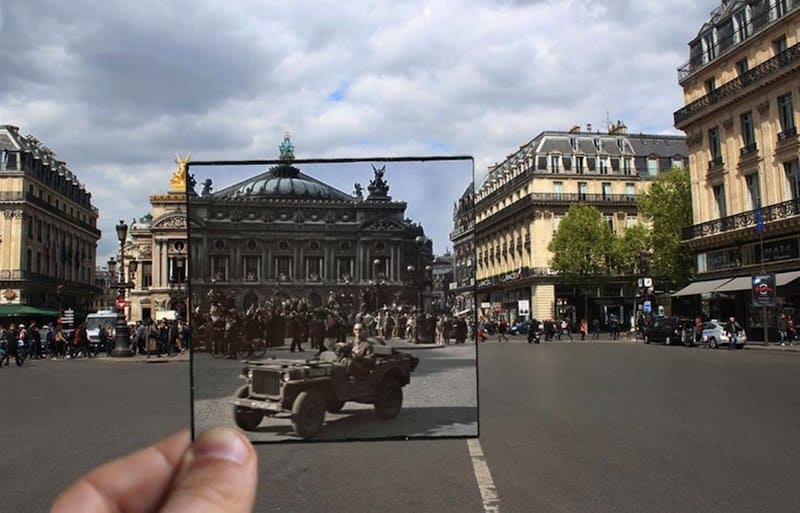 This photo was taken before the Palais Garnier opera house, which is arguably the most famous one in the world. It is also the setting of Gaston Leroux’s novel, The Phantom of the Opera. In this photo, present-day civilians blend seamlessly with the soldiers and pedestrians of the past. 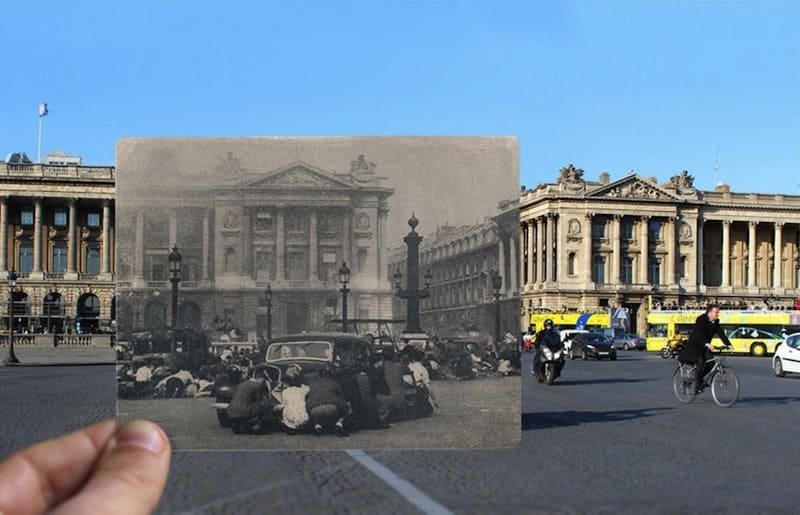 Here, civilians are hiding behind cars along the Place de la Concorde while a fire is going on in the nearby building. 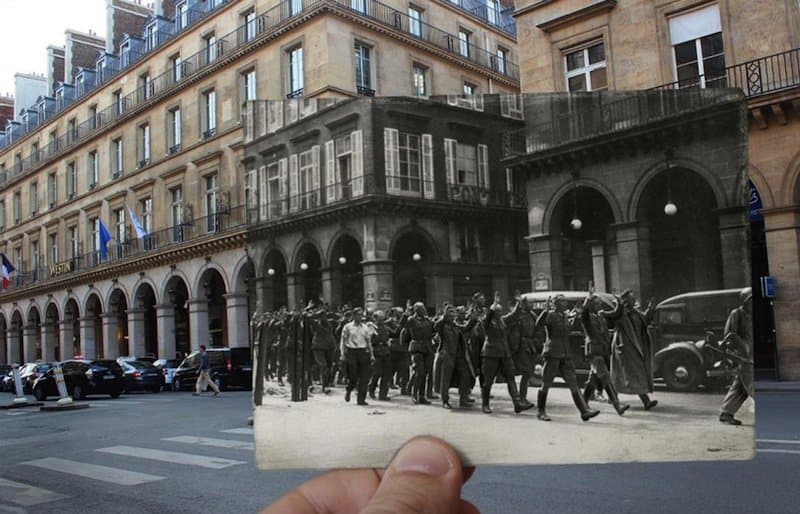 Here, German soldiers are surrendering before the Rue de Castiglione, which is now known as the Western Paris Hotel. 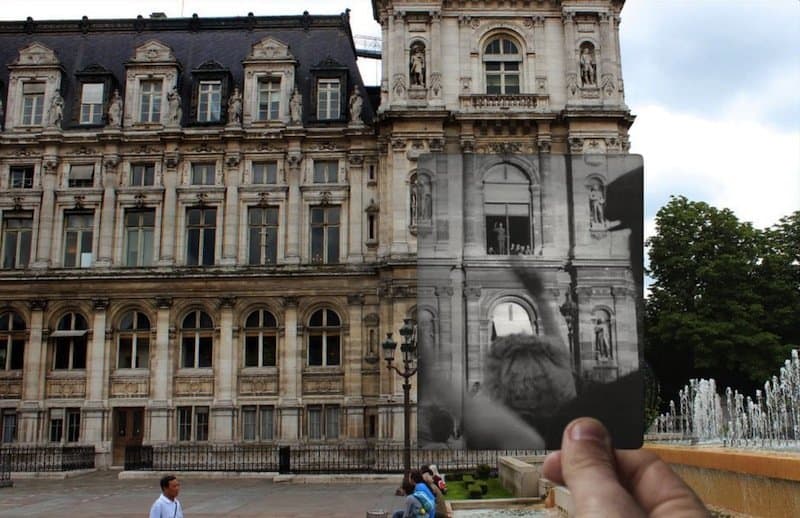 The President Charles de Gaulle (standing in the window) gave a famous speech at the Hôtel de Ville when Paris was liberated in August 1994. 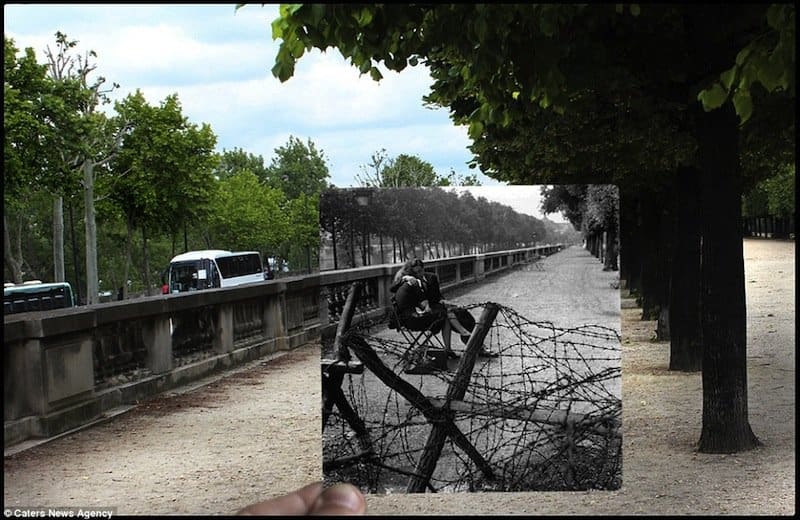 This couple is taking a moment to embrace in the Tuileries Garden, which is located between the Louvre and the Place de la Concorde. The garden saw much fighting between the French and Germans during the liberation. 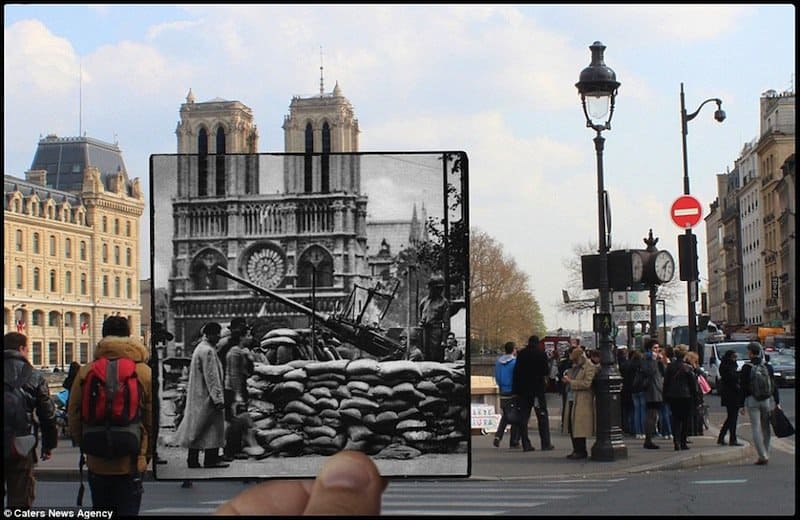 This is another photo taken before the Notre-Dame Cathedral. Nazi soldiers are standing guard behind a howitzer-like cannon. 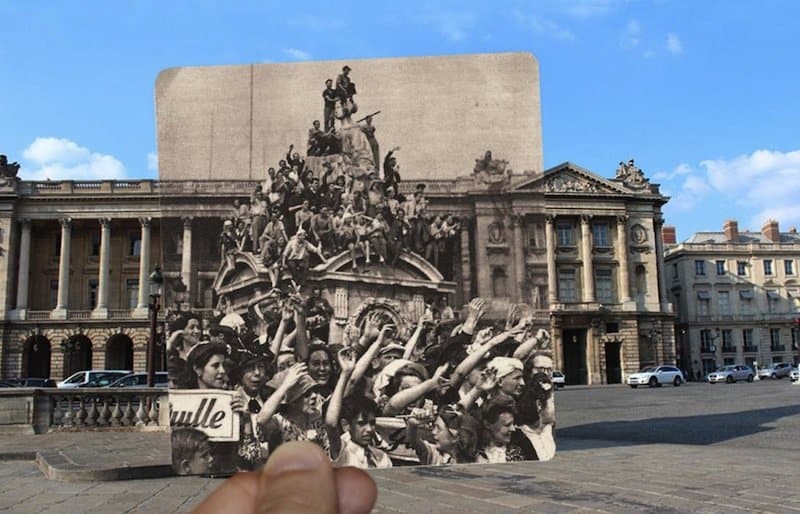 Here, Parisians are gathered along the Place de la Concorde to celebrate the liberation of Paris. 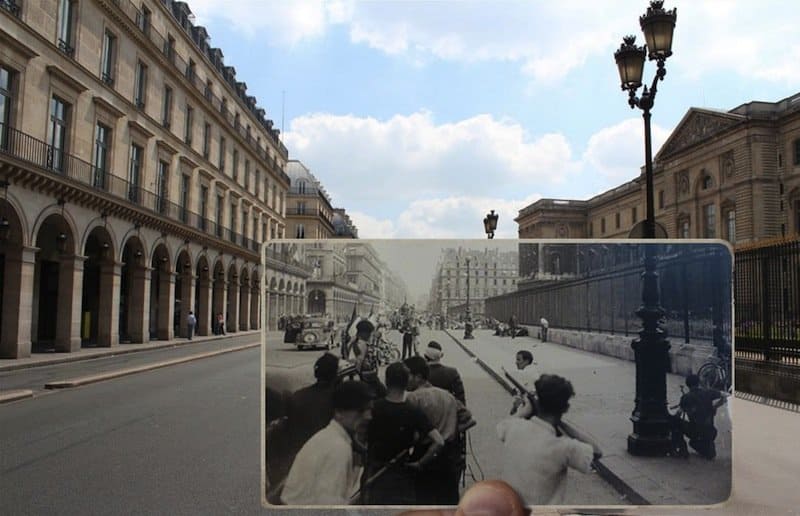 This photograph was taken along the Rue de Rivoli during the liberation. Today the boulevard is known for its shopping outlets. 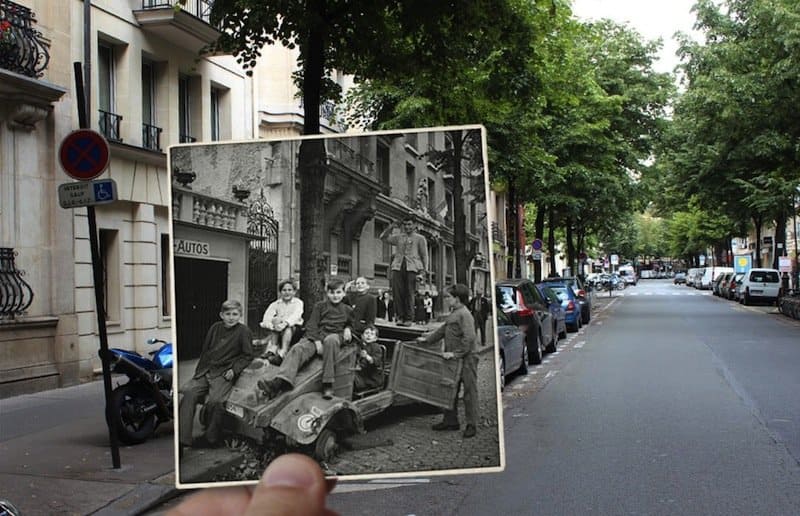 Here, a handful of boys pose on a broken down military vehicle along the Avenue Mozart. 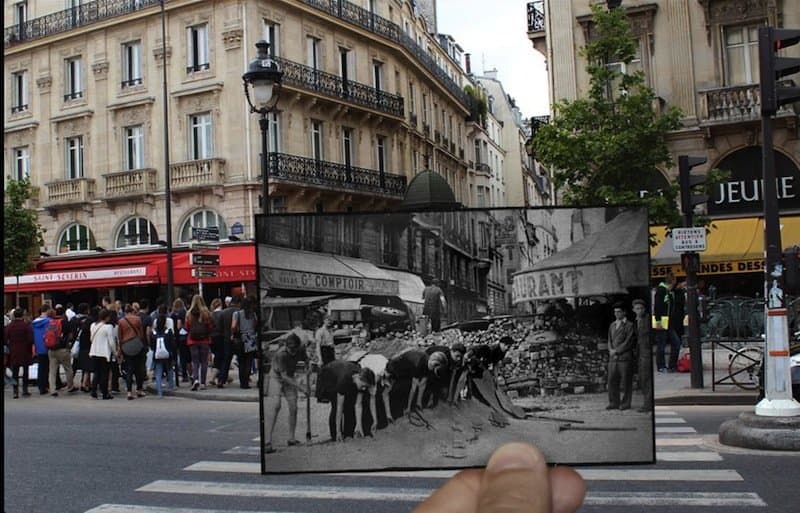 Here, Parisians are tearing up the asphalt in Place Saint-Michel after the liberation, likely in an effort to rebuild.