The animal kingdom is incredibly massive and varied, with thousands, if not more, species of animals throughout the world. However, an animal doesn’t have to be the biggest or the strongest to become one of the greatest living specimens on the planet. No, instead, the reptile has become a dominant force throughout the animal kingdom, both for their unique coloring and for how great of a pet they tend to make. While not all reptiles can be pets, most have a knack for entering our lives and becoming a force of pure brilliance. The following 15 reptiles are all the proof anyone should ever need to own a reptile of any kind. 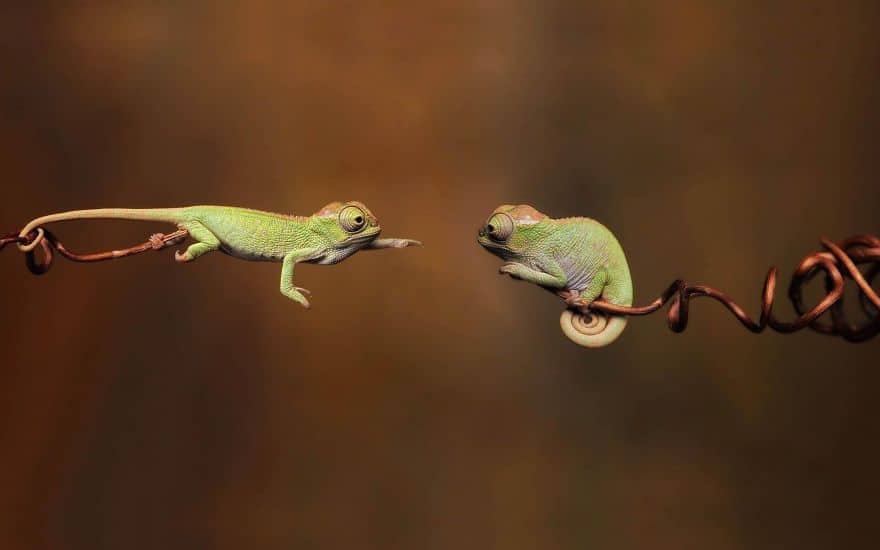 Not all lizards were made to live within captivity. In fact, most probably weren’t, though they adapt incredibly well to living within a home with humans. Lizards are animals, though, and do require a natural habitat where they can explore their surroundings, interact with their own kind, and recreate scenes from famous movies with their pals while resting comfortable on twigs. It happens more often than you may think. Take, for example, the above, where one lizard is hoping to reach out and simply touch his fellow partner in crime, enabling an emotional bond to cultivate between the two before he slips. 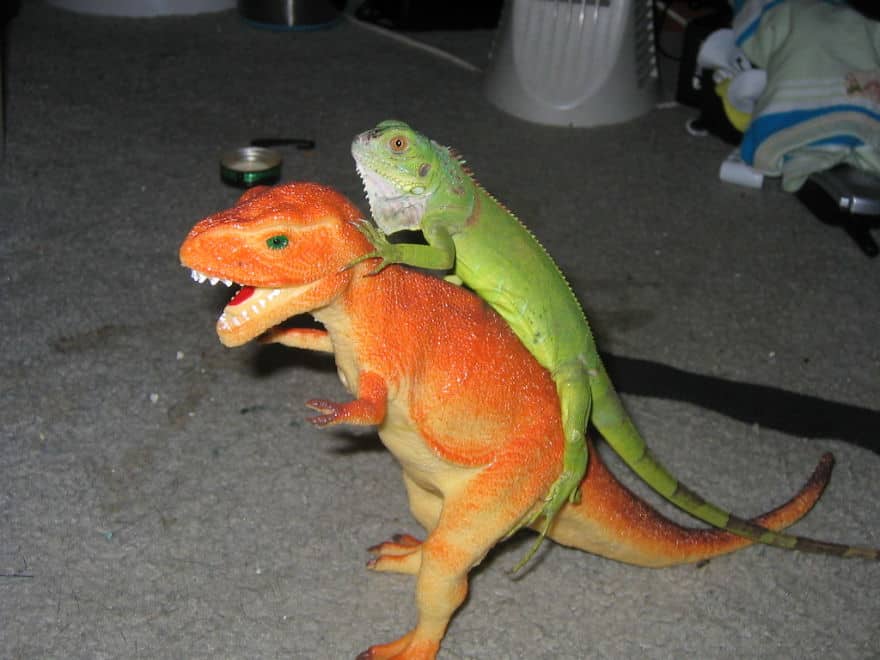 Humans have horses to ride around on, and cars, both of which are far bigger modes of transportation when compared against our tiny human bodies. So, what does a lizard in need of long distance travel have? Easy, a T-Rex, of course. The mighty king of the dinosaurs is a mere child’s toy now, but this lizard decided to make him his own, riding on his back to find the mystical land of Narnia. However, even a lizard could have dreams of grandeur, and the thoughts of world domination have surely crept into the midst of his mind as he eyes his human owner down atop his mighty steed. 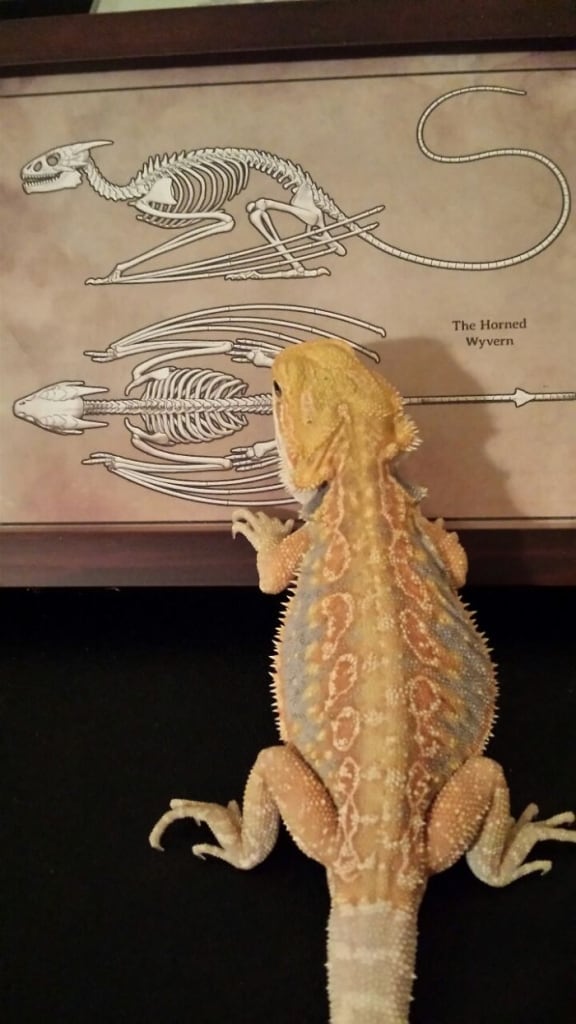 We all want to be something when we grow up, whether it’s a writer, a firefighter, or even an astronaut. However, what does a lizard grow up wanting to be? Well, a bigger lizard is the obvious answer. This bearded dragon has thought long and hard of what he wants to do with his life, and with the help of some scientific books and plaques, the ideas of soaring through the air with a wing span to make an eagle jealous have surely come to mind more than once. Its owner should be wary of when it learns to strap leaves to its back and jump off stacks of books, though. 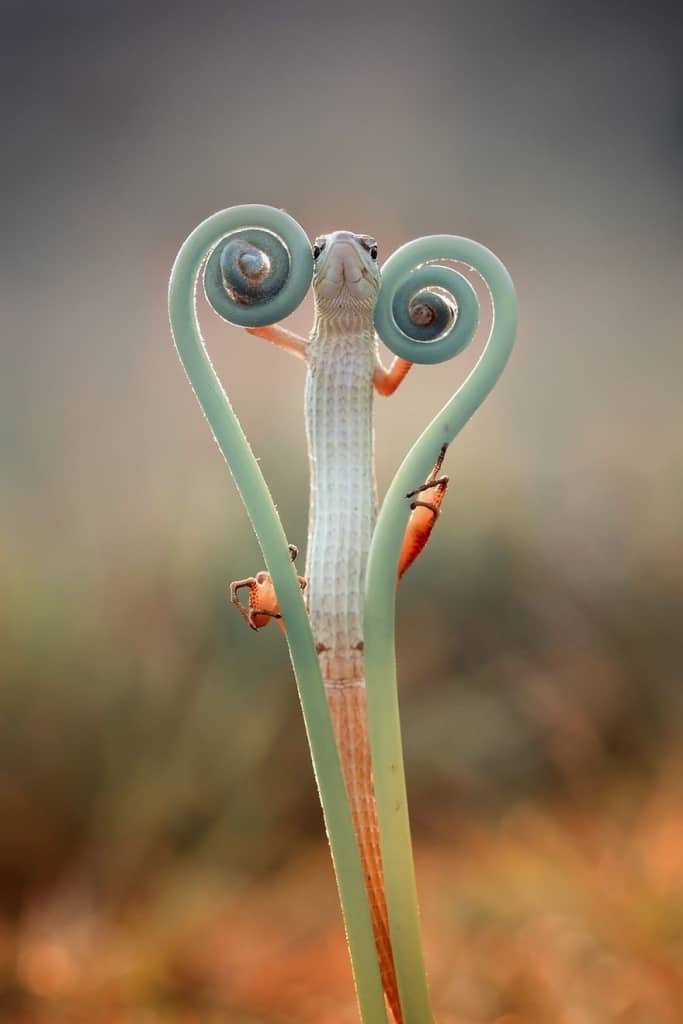 Animals can show love in their own way, even to a human owner. So, when you find a lizard creeping up a long bit of flora, splitting it down the center to form a perfectly created green heart, you had better reciprocate the feelings to the little guy. Should you choose not to remind him of how epic he is, you may find yourself awaking to an army of tiny lizards surrounding your bed in the midst of the night. They probably won’t bring heart-shaped plants, though, so be warned. A simple pat on the back should suffice when he shows you some love, though. 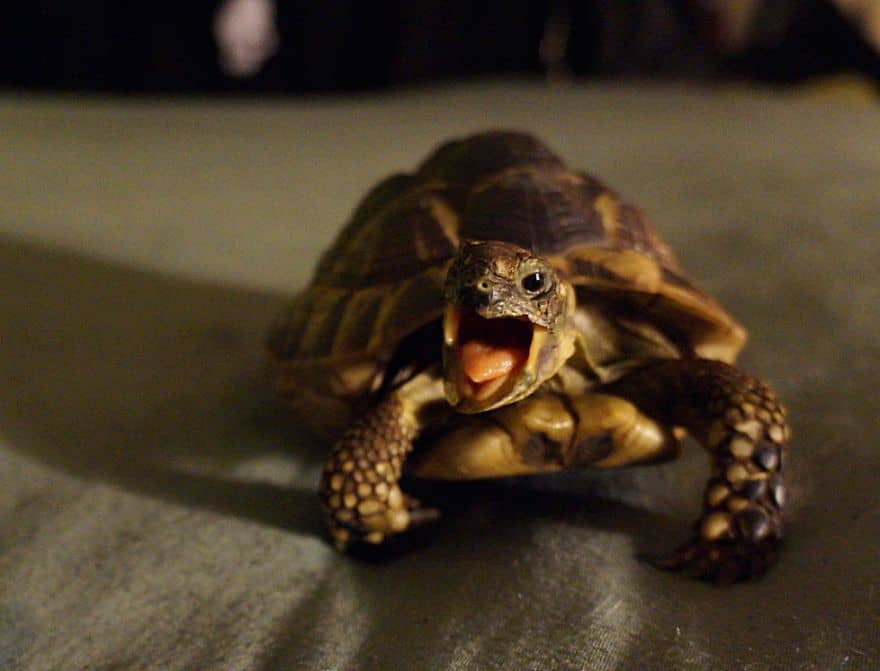 We’ve all seen the new Godzilla film in theaters, and it was pretty awesome for a giant monster movie full of talking. However, when Godzilla finally appeared on-screen in all his massive glory, someone else was watching over your shoulder in the living room. Your pet turtle thought it would be interesting to see what he could grow up to be, so he has begun practicing his mighty roar throughout the entire house. It may not make much, if any, noise yet, but you can bet it will be fearsome in the end. Take a step back and enjoy the roar of the mighty turtle pet. 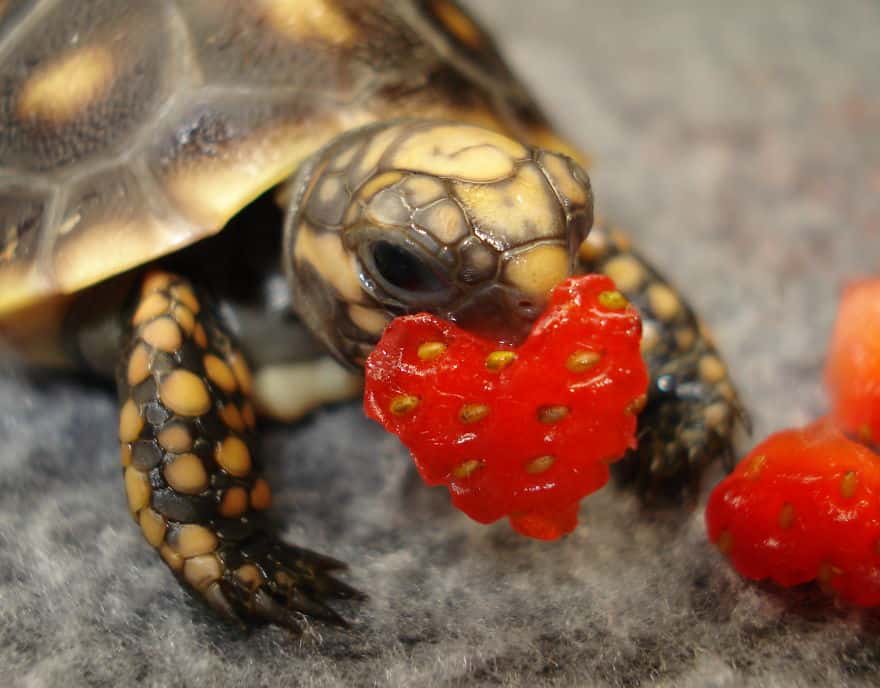 Everyone wants to eat as healthy as possible these days, so we’re picking up different types of fruits, vegetables, and things made out of soy (gross). However, you’re not the only person in the house looking to eat a bit better, as that pet turtle you love to hear roar after watching Godzilla tends to love having himself a little bit of strawberry for a snack, or even an entire meal, he’s not that picky. If you’re interested in seeing him chomp down on the glorious red fruit while sitting comfortable on the carpet, make sure to buy the fruit fresh and get it to him quickly to ensure the most amount of happiness.

See What I Can Do? 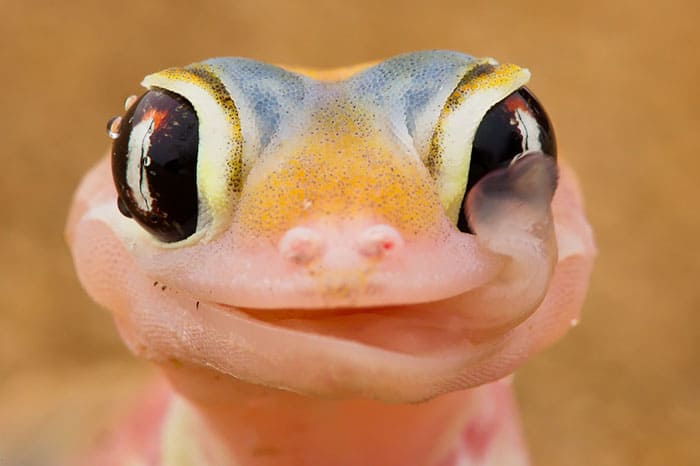 Lizards are quite weird, we must admit. They tend to have the odd habit of licking their own eyeball when they want to clear it of anything, but it’s still something to behold. So, when you find yourself having a staring contest, and then suddenly your pet decides to creep you out and lick its own eye, you can bet she’s already won the entire match. You may as well concede defeat for any future rematches, too. Watching her lick her own makes us want to try it on ourselves, but it won’t work, we promise you that. Go ahead and try if you don’t believe us.

Is This Seat Taken? 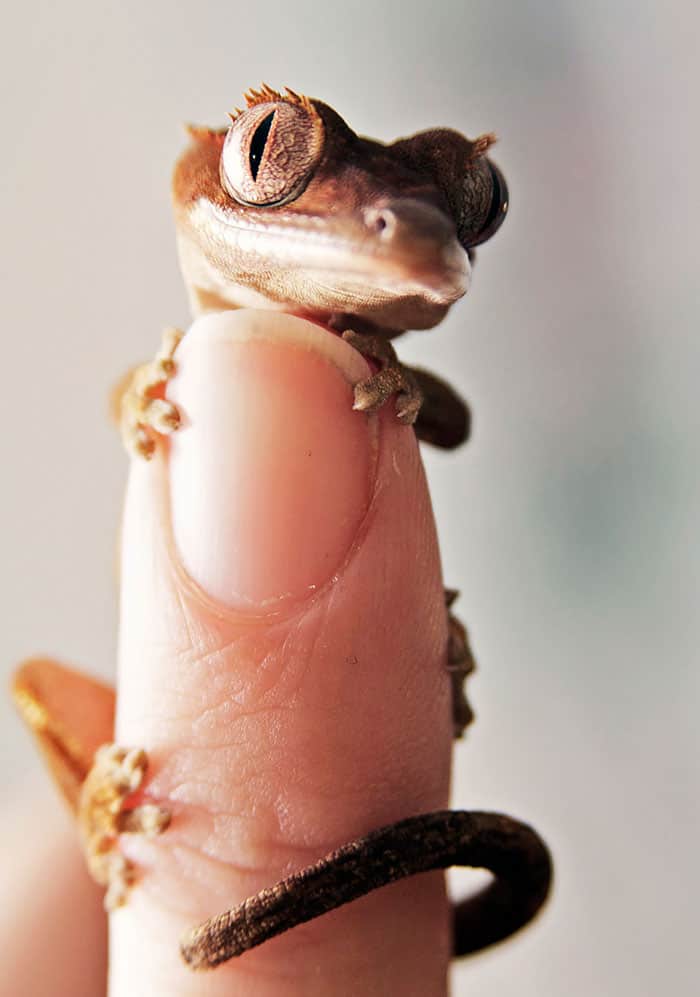 Lizards come in all shapes and sizes, with some being incredibly small, and others being the size of a small dog. However, it’s the small ones that tend to be the cutest, as they find themselves sitting in all types of odd places, like at the tip of your finger while you’re trying to focus on something else. Of course, when you feel something that tiny creeping up your hand, your first instinct may be to shake it off. Please don’t do that, as you will enjoy the surprise peeking over the tip of your pointer finger in the end. Let him ride around, feeling like the king of the land, for as long as possible.

Smiles Are Worth A Thousand Words 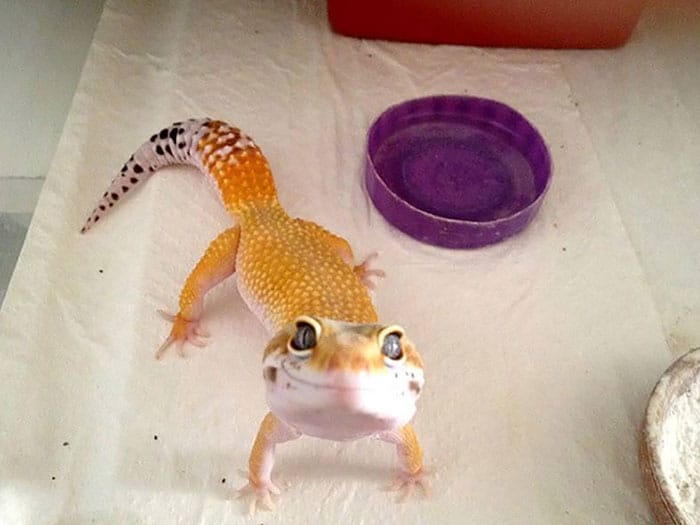 Pictures may be worth a thousand words, and there is one right there offering a smiling leopard-spotted gecko, so the smile is worth the thousand words now. It’s a nice feeling knowing that when you look down upon your little pet lizard that she is looking back up in happiness, too. Pets love their owners if treated right, so you know when one is literally smiling at you that you’ve done something right. Continue this behavior, and you may end up with a pet to defend your home in the odd case of invading bugs in the summer months. 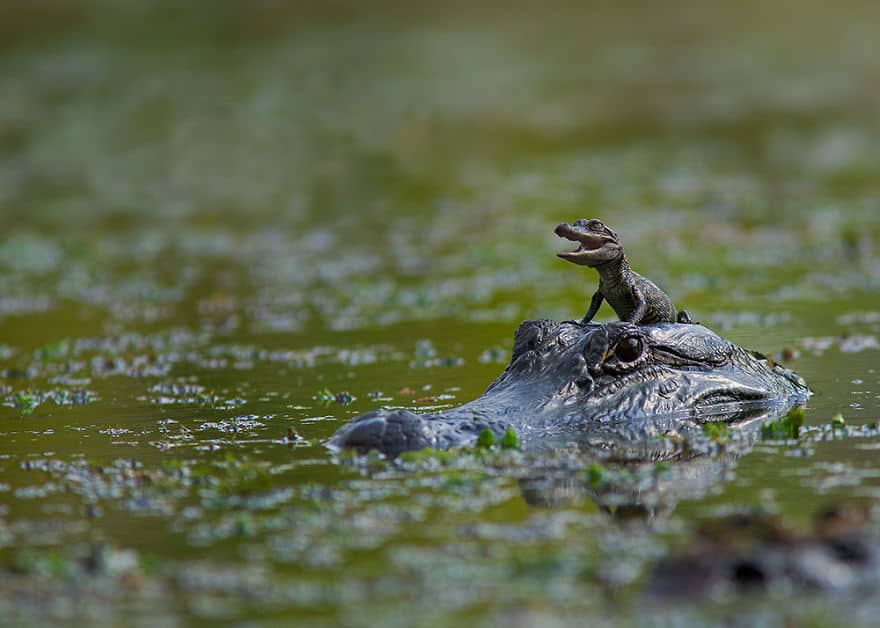 A plastic T-Rex for a mount may have been fearsome enough, but combine the need for a ride through the swamp with a living, breathing reptile, and you may have found your match. Crawling up the back of its mother, a young reptile may find himself in the position of what could be thought of as a throne to some, and to others it will be a battle horse, decked out in armor and teeth. This one’s Napoleon Complex may come off a little strong, so we suggest avoiding the water for…ever. You could be brave and try to pet him, but we suggest against it. 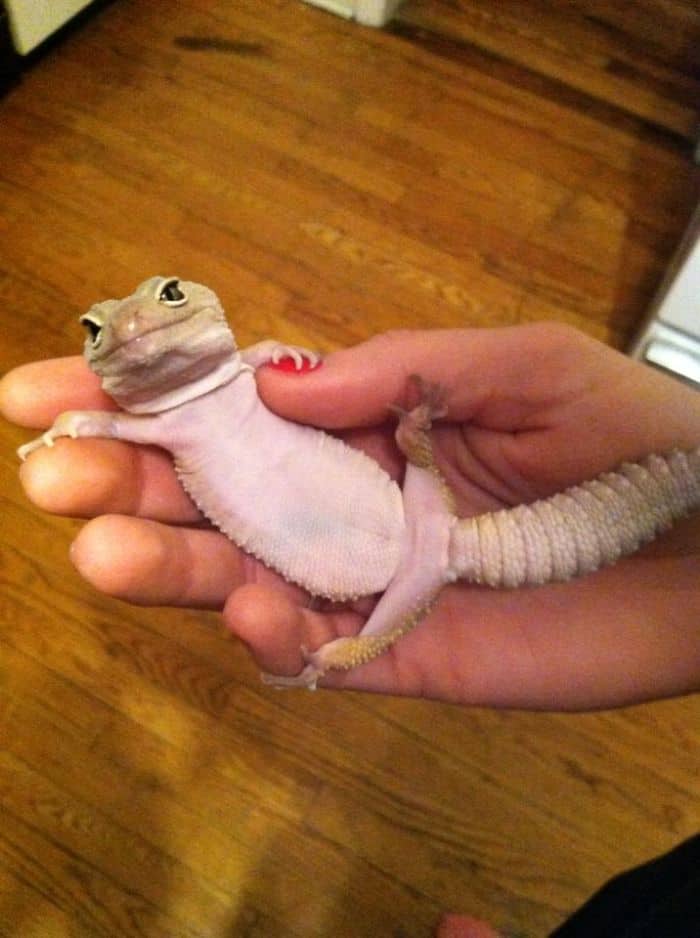 Yeah, lizards enjoy relaxing in a comfortable hand, have something to say about it? This little guy knows exactly what he’s doing. He’s putting all the moves on that hand, coming off incredibly interesting, and probably has plenty of great topics to bring up later on in the night. Of course, that can all be skipped if you’re into painting and want to make a work of art in the form of a portrait of him. If you ask nicely, this little lizard may even make a sexy pose to ensure you capture him in his best possible form.

The Right One is Special 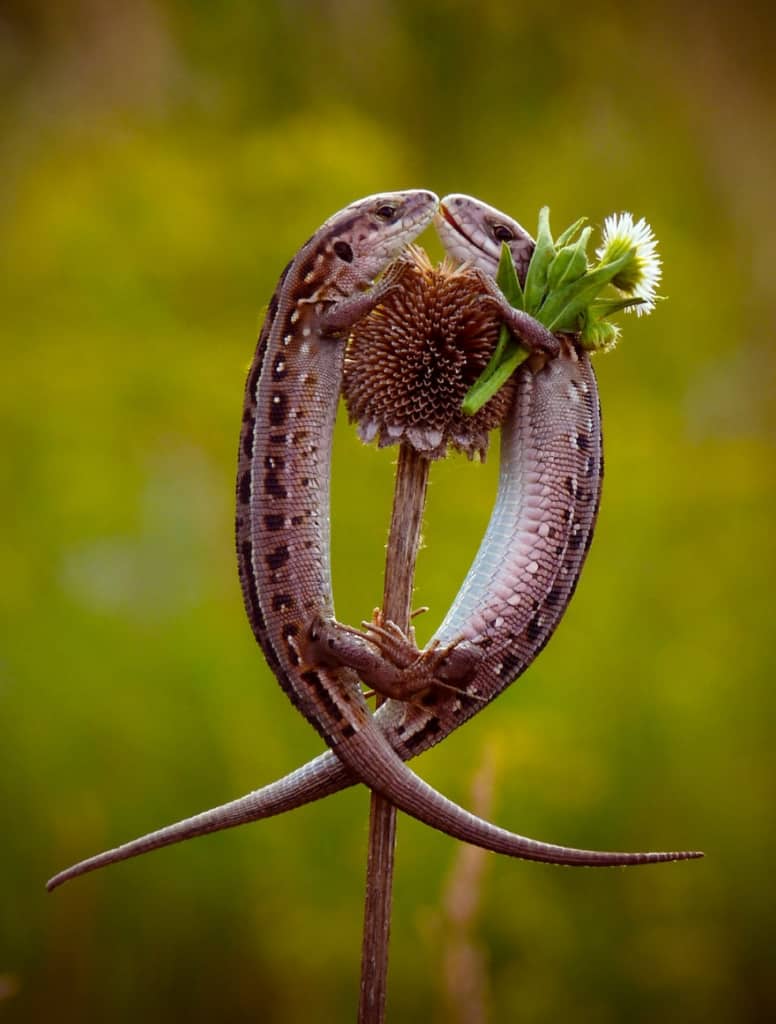 Finding the right person to spend your life with is a difficult task, but you know almost immediately when you’ve located that special person. Well, it appears the same applies for lizards, as that special significant other is out there, waiting on the end of a blossoming flower for the perfect mate to climb up and share nose with. Chances are this union is going to end well, but they may want to find a different place to spend their time for fear of one of them falling off the flower to the ground below. Someone should probably make spaghetti. 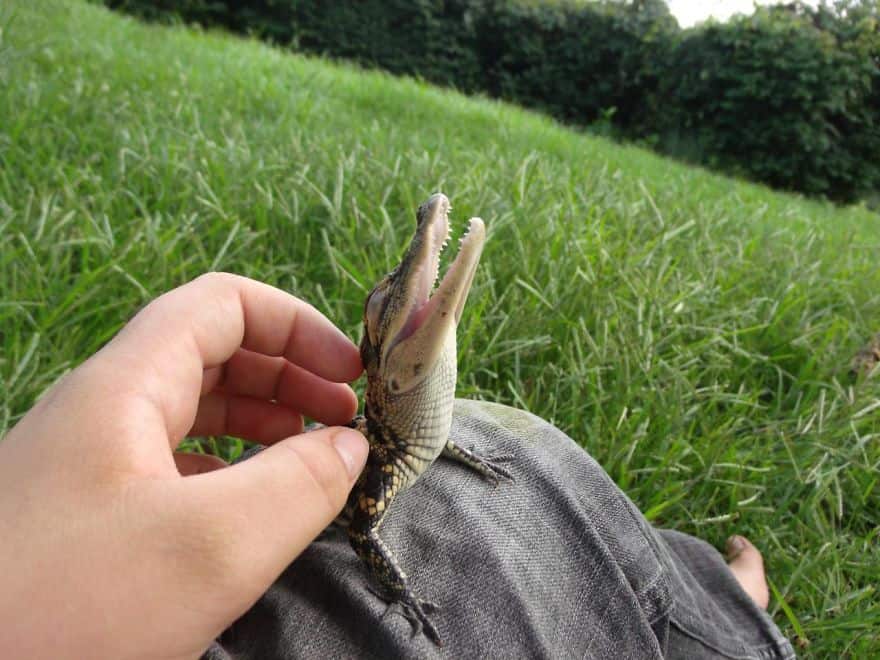 Having a crocodile for a pet instantly makes the owner a badass. Having a baby crocodile for a pet makes him marriage material. Of course, the owner is nothing without the pet in question, and when you find yourself with a baby crocodile sitting atop your knee, head tilted back in pure ecstasy, as you pet it, then you know you’re doing something right. Ensuring that baby loves you now will be key to keeping it as a pet within the backyard’s underground swimming pool when it grows older, as it will protect you from any intruder foolish enough to break into your backyard for gardening supplies. 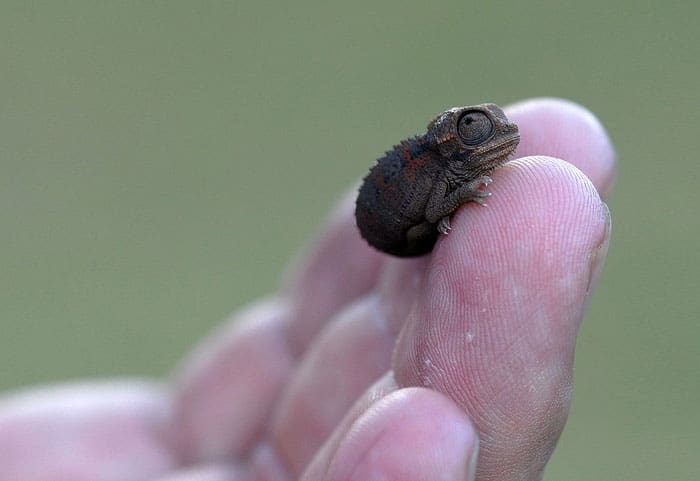 The problem with having a pet the size of the tip of your finger comes in the form of losing it, as one wrong step could be the last, unfortunately. However, when you have a lizard as small as this one, you’re going to keep a careful eye on it, and, perhaps, even carry it around within the palm of your hand most days. It will look weird, that is for certain, but once other people see the guy carrying a tiny lizard, they’re going to want to know more about this mysterious individual and his fantastic pet. Just wait until it grows up. 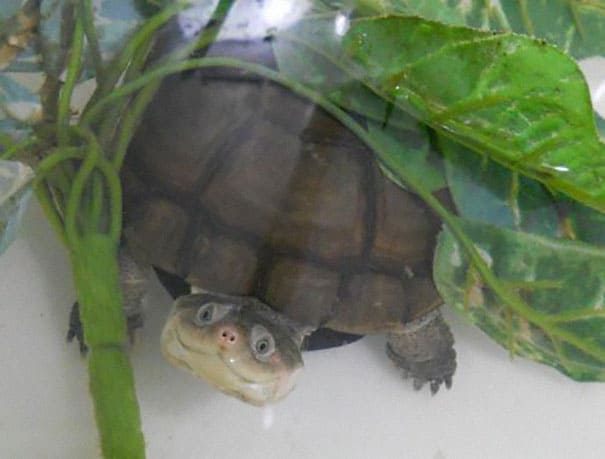 Who would have thought that a turtle could produce such a heart-warming smile as this one. The face alone makes it worth the cost of all the food, the tank, and everything else that went into ensuring this little guy had the perfect home away from home. If you’re lucky enough to capture this smile on camera, you probably want to ensure that memory is kept forever. However, if you’re a good owner to entice a smile like that from your pet, chances are it will happen again in the future. Keep that camera close by the tank for some future snapshots.