15 Of The Worlds Weirdest Animals You Might Not Know Exist

It’s no surprise that with a world full of many different animals, there will be a few weirdos that stand out. Whether it’s due to a remarkable ability, an interesting appearance, or sheer size of the animal, there are some truly special creatures out there. Have you ever seen wondered what an anteater would look like if it bred with a pinecone? Probably not but an animal does exist with that exact appearance. This list is comprised of 15 of the worlds weirdest creatures that you might not know exist. Some of these animals you will most likely never see in the wild in your lifetime and some of them you won’t want to see beyond the pictures posted here. Enjoy 15 of the worlds weirdest animals that you might not have known exist. 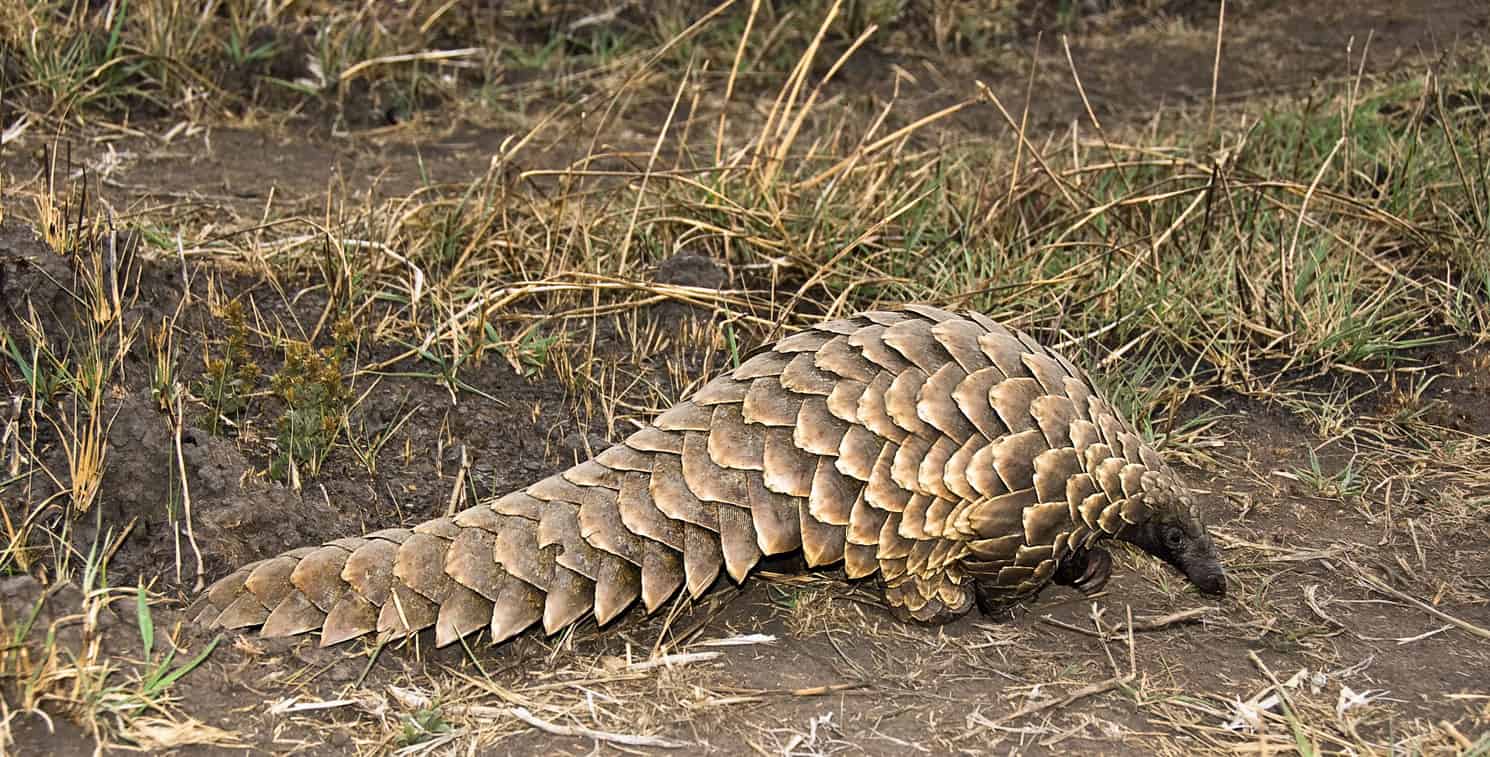 Pangolins have the appearance of a walking pinecone crossed with an anteater due to the large keratin scales that cover their skin. The natural habitat of pangolins are throughout tropical regions in Africa and Asia, although if you visit these areas you may never even see one in the wild due to being over-hunted. In areas of Asia, their meat is viewed as a delicacy and their scales are believed to hold medicinal properties. When they feel threatened, they can roll up into a ball similar to an armadillo. Pangolins are actually quite near sighted so they rely on their hearing and their very good sense of smell to track down their insects for feeding. Their tongues are similar to anteaters which they use to gather ants or termites. They also come equipped with a gland that creates a foul smell, similar to a skunk although they can’t spray. 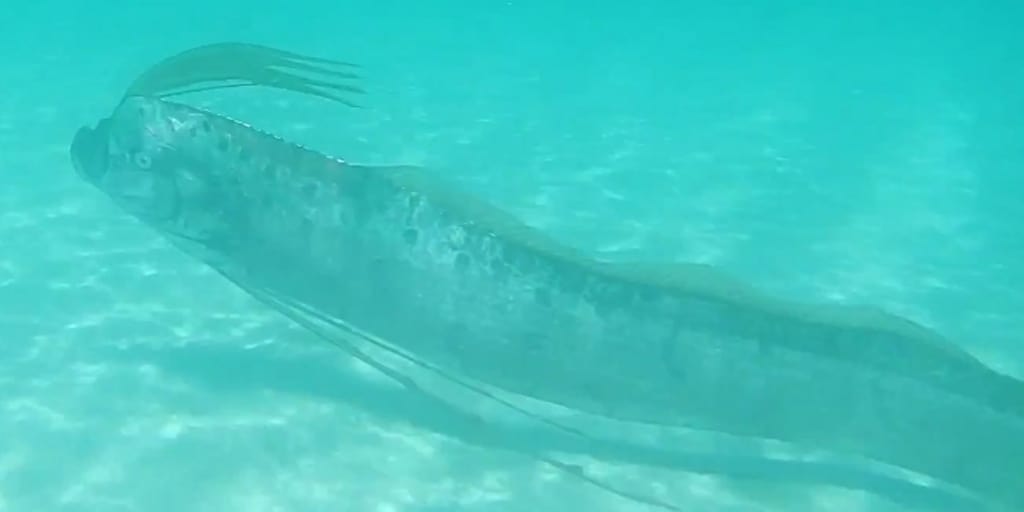 The oarfish looks like a mythical water dragon and you would think they are truly a myth due to their rarity. They aren’t seen very often because they live in depths of up to 1,000 meters (3,300 feet) and are said to be solitary. Oarfish are also very big creatures of the deep, growing up to 11 meters or 36 feet long. This is a fish that you have likely never heard of before and you will likely never see one in your lifetime. The few encounters with oarfish at shallow depths were due in part to the fish coming to shore to die. Due to their rarity, very little is actually known about the oarfish. 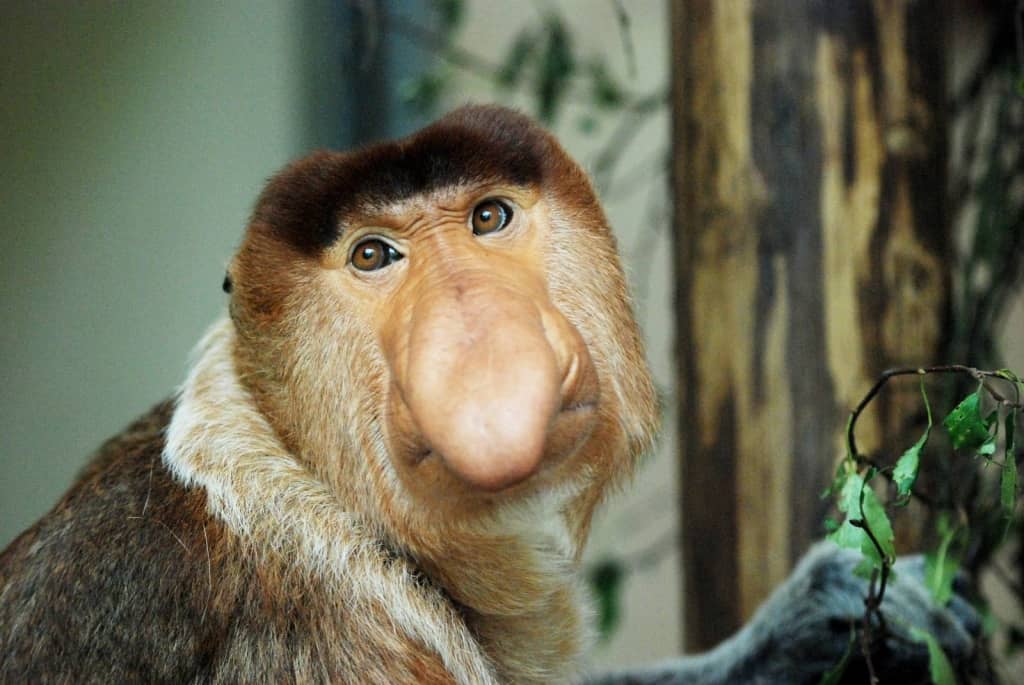 These monkeys are easily identifiable due to their big noses. It’s not entirely known why these primates are equipped with their huge schnoz but it is theorized as a way for males to attract a mate. Female proboscis monkeys may have large noses but the males are the ones with the gigantic sneezers, that may typically hang lower than their mouth. They are endemic to the Southeast Asian island of Borneo which resides between Indonesia, Malaysia, and the Philippines. The proboscis monkey is one of the largest monkey species that is native to Asia. Not only do they have large noses but they also have come packaged with a big pot belly for their special digestive system, enabling them to eat unripe fruit and leaves. They are also said to have almost permanently erect penises. 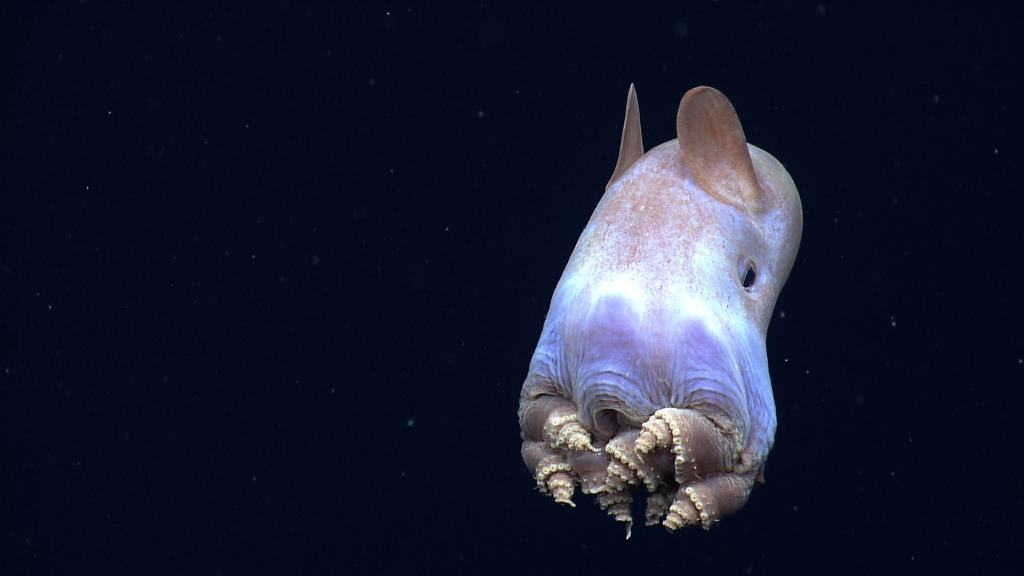 The Dumbo octopus has large ear-like fins which they use to fly through the water which resemble the ears of Walt Disney’s Dumbo, the flying elephant. They are pretty rare to see because they tend to live in very deep waters that span from 400 meters to 4,800 meters deep. The few times they have been spotted in the wild, they have been studied to have a diet rich of crustaceans and worms. The largest dumbo octopus ever recorded was close to 6 feet long, making it about as tall as the average man. This octopus has also been observed around hydrothermal vents on the sea floor. These vents spew out extremely hot, mineral rich fluids due to magma under the seabed. 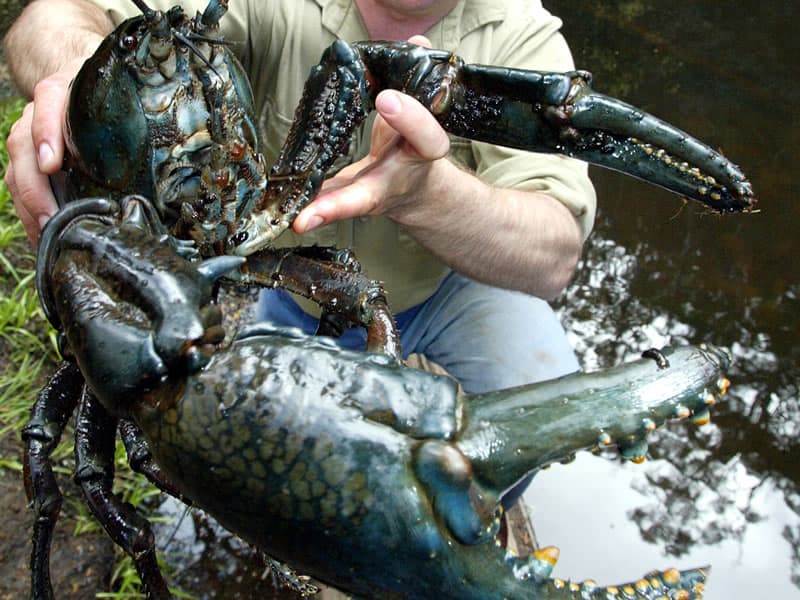 The largest freshwater invertebrate in the world belongs to the island of Tasmania which resides right off the coast of Australia. Potentially this crayfish can live forever, due to its ability to regenerate its body parts. Also, these crustaceans have been around for quite some time and are said to live up to 40 years. Unfortunately, they rarely make it that long and have been listed as an endangered species, due to over fishing and habitat loss. Typically when you think of a crayfish, you think of a relatively small version of a lobster. However, the Tasmanian giant freshwater crayfish can weigh up to 5 kilograms or about 11 pounds. They can also be over 31 inches long, making them larger than your average lobster. 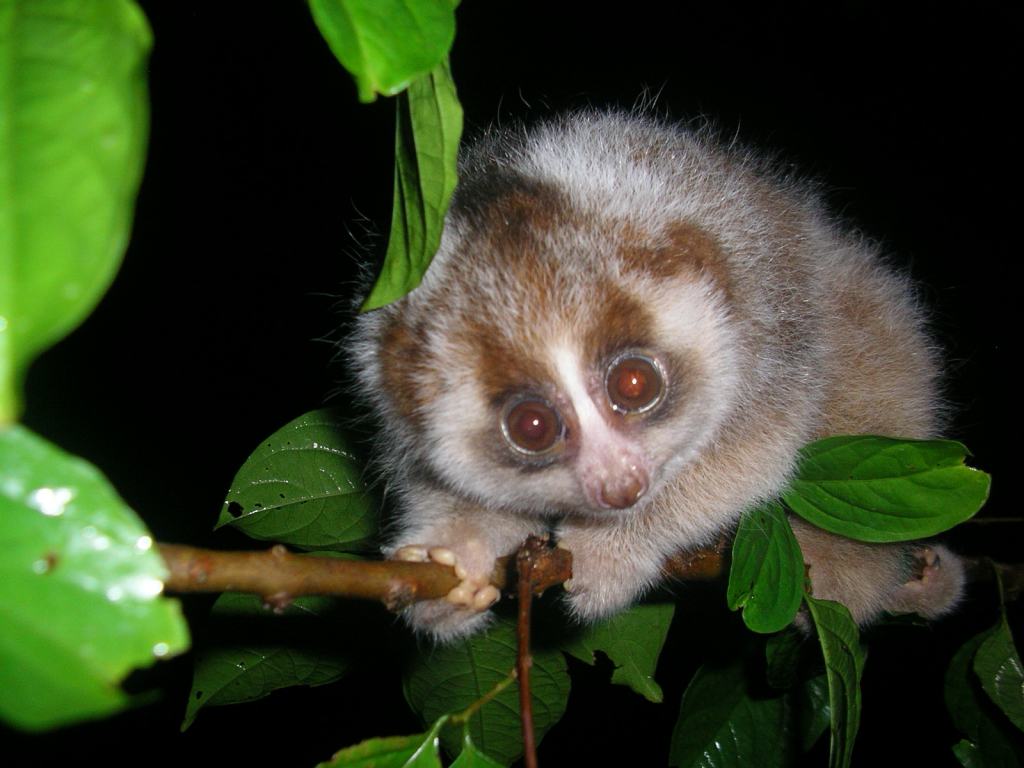 These nocturnal primates may look awfully cute but it should be known that their bite can be pretty dangerous. The slow loris has a toxic bite which is a rare trait among mammals. They have a special gland near their elbows that they lick which, in turn, creates a toxic bite when the secretion is mixed with the saliva of the slow loris. This toxin is said to act as a deterrent to predators and is also applied to the fur during grooming as a form of protection for their infants. Even with a toxic bite, many slow lorises have fallen victim to becoming pets, probably due to their undeniable cuteness. Their toxic bite is said to be painful and can even cause death if you are allergic to the toxin. 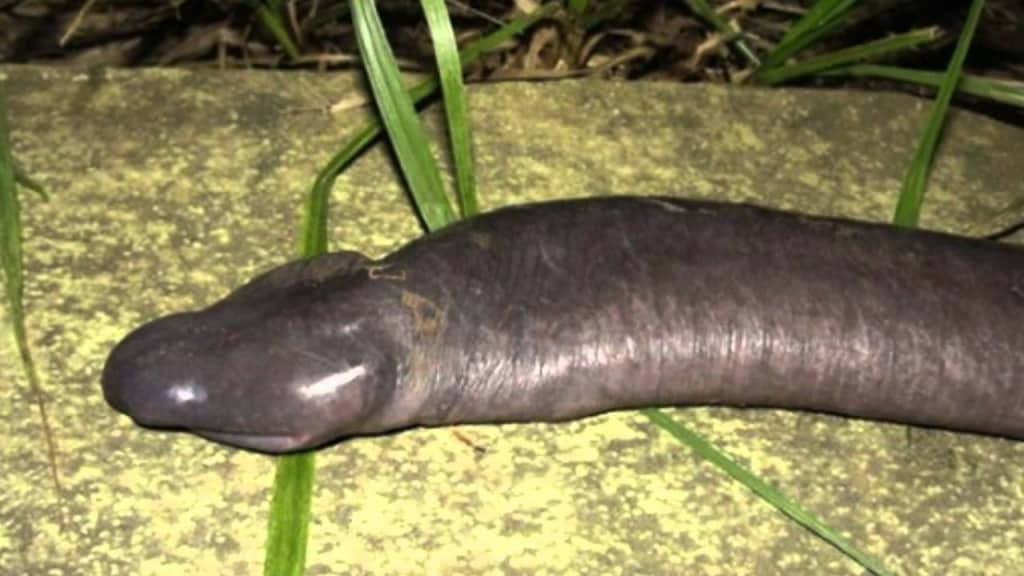 This animal might have a shocking appearance but it is neither a penis nor is it a snake. It is an amphibian that was recently rediscovered in 2011 while part of a river in South America was being drained. Little is known about these animals but their appearance might come off as disturbing or hilarious, depending on how you feel about this creature. They are limbless and generally navigate by utilizing their sense of smell. Due to lack of information about the animal, it is classified as “Data Deficient” by the International Union For Conservation of Nature. The penis snake has a scientific name, Atretochoana eiselti, so if you think this is some kind of a gag you can rest assured that this creature is real. 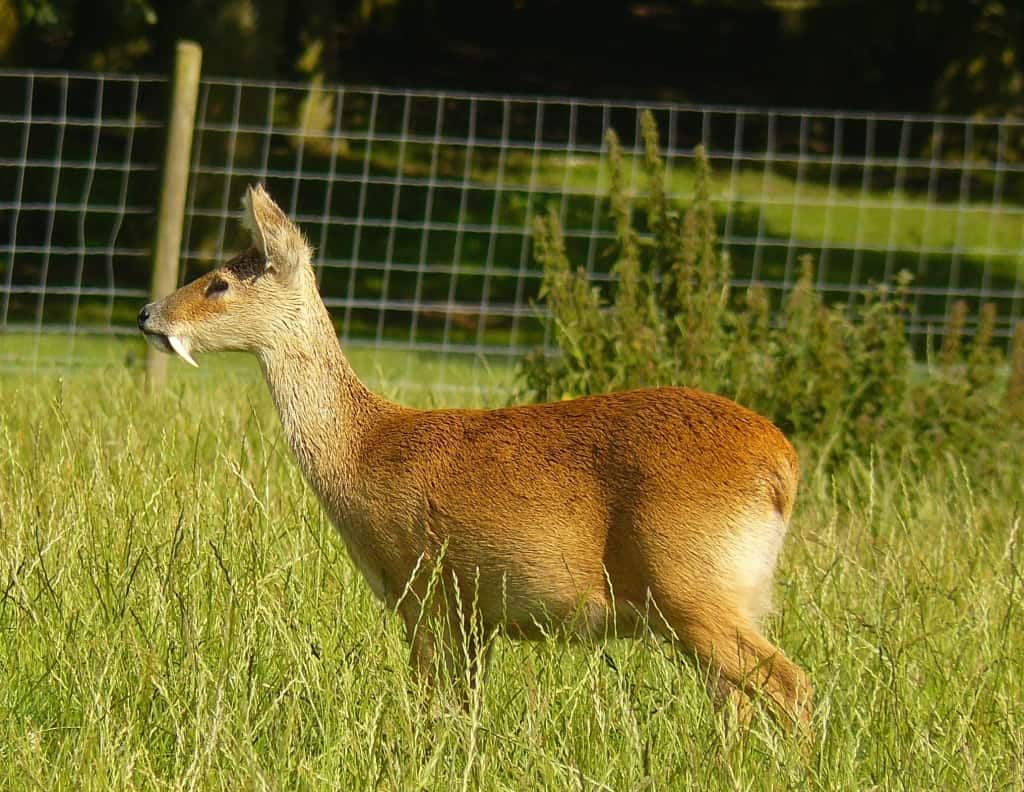 Yes that deer has fangs and no those fangs aren’t photoshopped in to make this animal seem like it would be the star of a bad horror film. The water deer, also known as the vampire deer, is not actually a blood sucking demon creature of the night. Put your garlic and wooden stake away, the vampire deer is a herbivore, meaning it feeds primarily on vegetation. The tusks of the water deer are held loosely in their sockets and can actually be moved about and controlled through facial muscles. They can even be drawn back and out of the way when the water deer is feeding. The water deer is native to China and Korea but they have also been distributed to France, United Kingdom, Belgium, Netherlands, and Argentina.

If you have spent a good amount of time on the Internet, it is possible that you have seen these ugly aquatic creatures in some form or another. The blob fish is found deep in Australian waters at about 600-1200 meters. They have a jelly-like flesh that is less dense than water which allows them to float about without much effort. The low density of their flesh also contributes to their ugly appearance. Apparently, blob fish appear much different from their form in water to their ugly appearance when out of water. They lack any predatory skill, lazily waiting for their food to come to them which is good for a fish that aimlessly floats around above the sea floor. 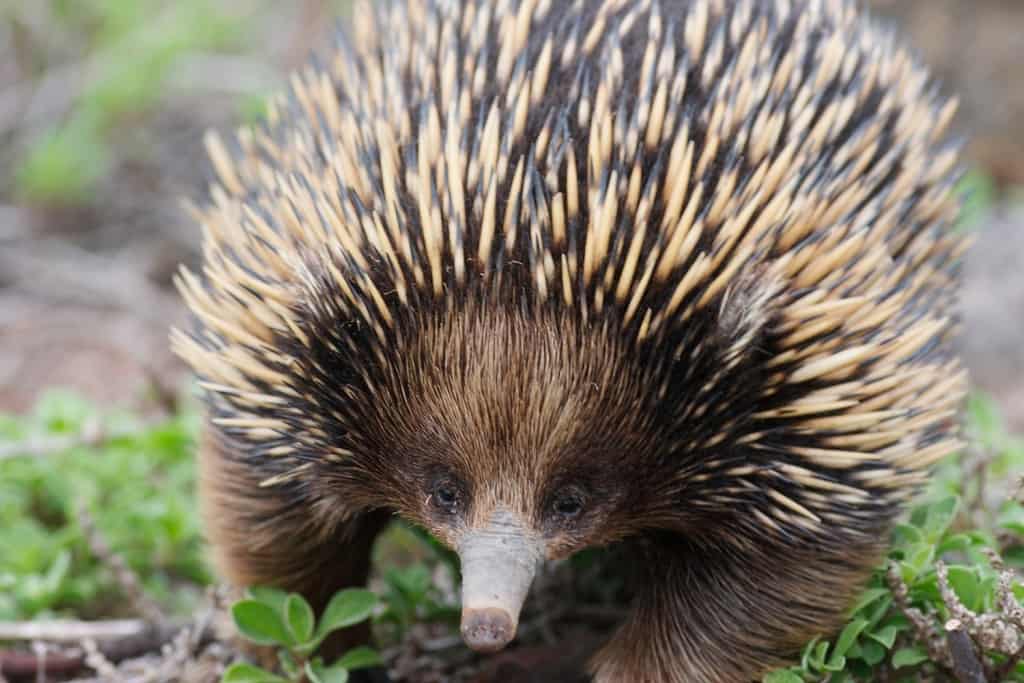 The echidna has an appearance of a hedgehog or porcupine type creature but it is also similar to an anteater, due to its long snout and diet of ants and termites. They are monotreme animals, monotreme meaning single opening. That’s right, they have urinary, defecatory, and reproductive organs all in a single “opening” which is scientifically known as the cloaca. Not only that but they are egg-laying mammals. This is a very uncommon trait in mammals that is shared with the platypus. If you have ever played a Sonic the Hedgehog game, you might be surprised that the character Knuckles is actually an echidna. These creatures also have large claws which are used for digging and burrowing, and like hedgehogs, they can curl up into a ball. They also have an interesting looking “package” but I wouldn’t advise on google searching echidna penis (to save you the trouble, just picture a babies hand). 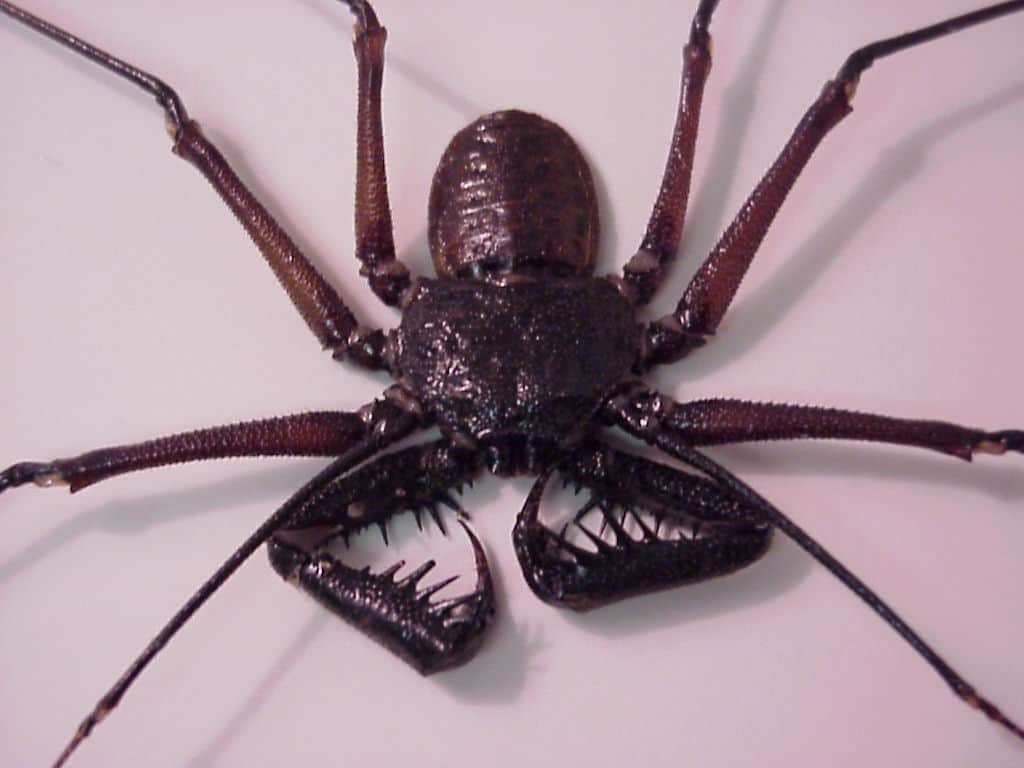 This creature of nightmares may look dangerous but it actually poses no significant threat. It may be called a scorpion but it doesn’t have the typical long scary tail with a stinger on the end, although there are species of whip scorpion that do sport a whip-like tail. They don’t have venomous fangs so you don’t have to worry about being bitten. They rarely bite if threatened but they can grab you with their “claws” or pedipalps which looks like it could hurt if those spines punctured your skin. Tailless whip scorpions are nocturnal arachnids and are found throughout the world in tropical regions. They have poor eyesight but can sense out their prey by using their front legs, which aren’t used for walking purposes but primarily function as sensors, and their pedipalps. 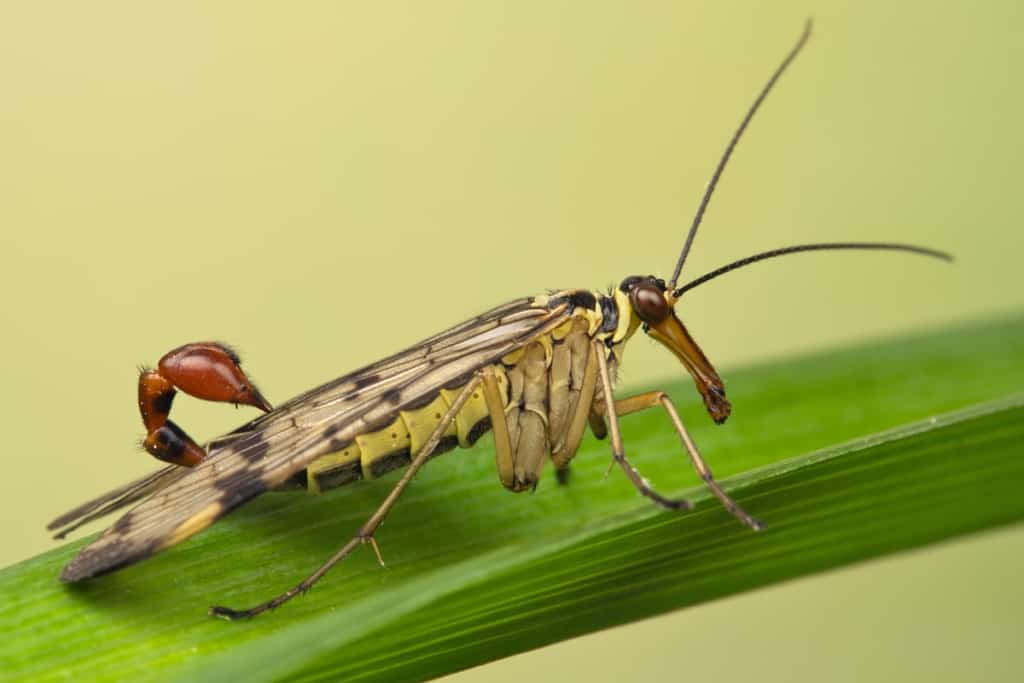 What’s worse than a creepy crawling scorpion? The answer is a scorpion that can fly. That stinger actually can’t sting though so maybe the scorpionfly isn’t so scary at all. I would still probably freak out if a scorpion came flying at me, regardless of its ability to sting or not. That stinger isn’t a stinger at all. In fact, the stinger is the enlarged genitals of the male scorpionfly. The scorpionfly belongs to the order of insects called Mecoptera. Modern Mecoptera are said to be predators or consumers of dead organisms, giving them an important role in the ecosystems that they inhabit. However, some Mecoptera feed on vegetation in moist environments. 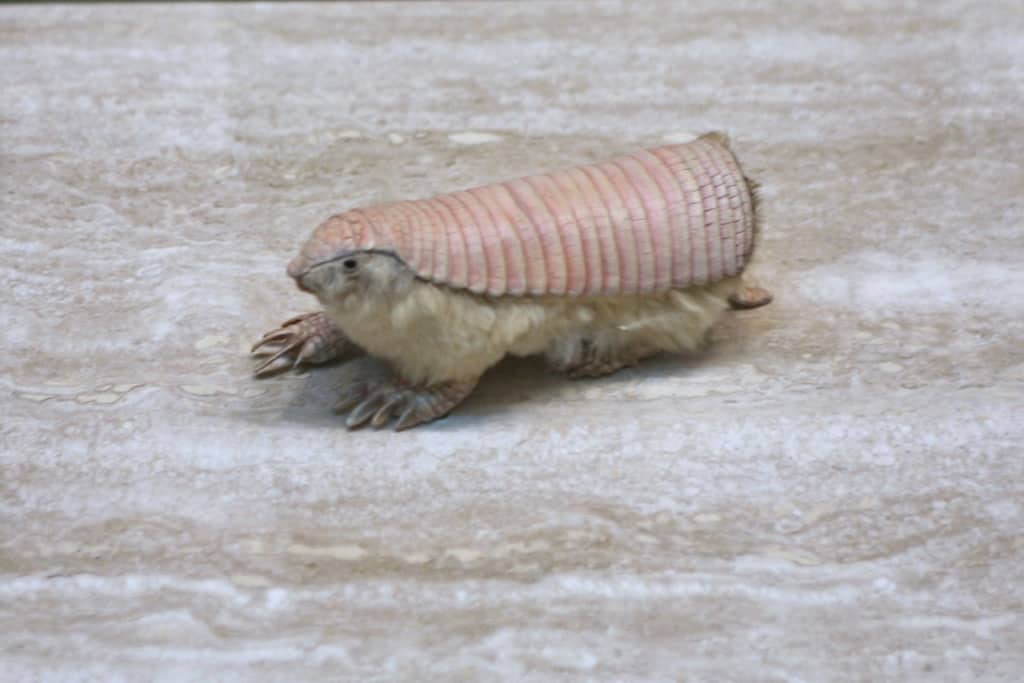 This weird little creature looks like a squirrel had some nice combat armor slapped to its back and feet in order to take on its enemies. The pink fairy armadillo is the smallest species of armadillo, measuring in at about 10 centimeters in length, on average. They are endemic to central Argentina and are adapted to the desert. They can be found in sandy areas with dunes or in dry grasslands, although they are burrowers so it is unlikely that you will see one on the surface during the day. They are nocturnal animals that live underground but they may surface at night to find food; which is mainly ants. Since they prefer dry and sandy areas, rain can actually be dangerous to the burrowers. The pink fairy armadillo has to leave its burrows when it starts raining so that it doesn’t drown or get its fur wet. If its fur gets wet, it could potentially experience hypothermia because it would not be able to thermoregulate its body temperature. 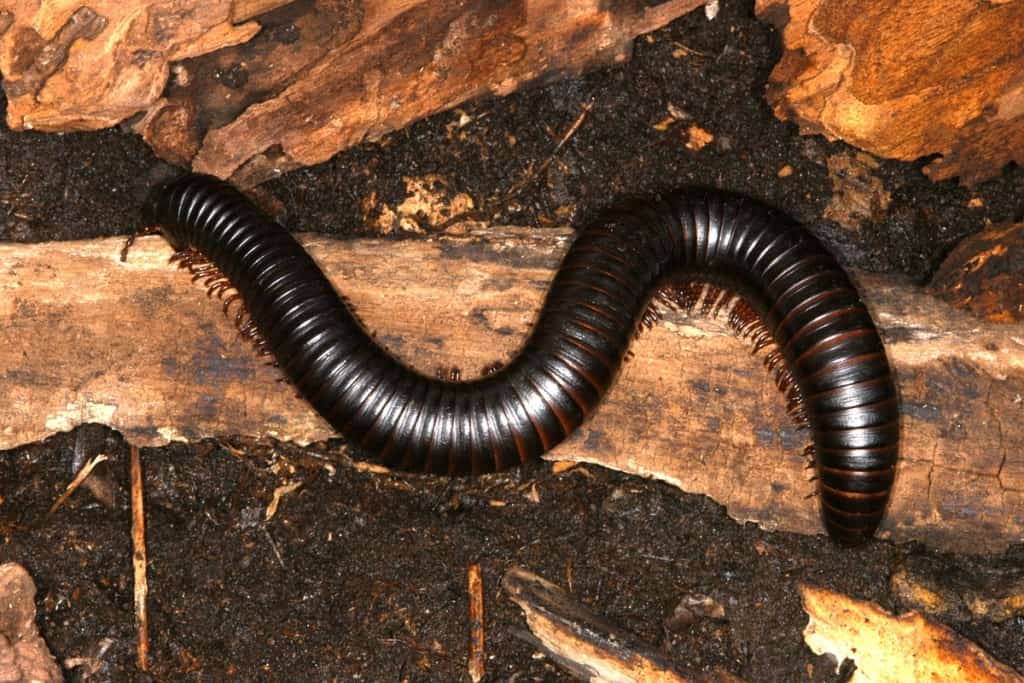 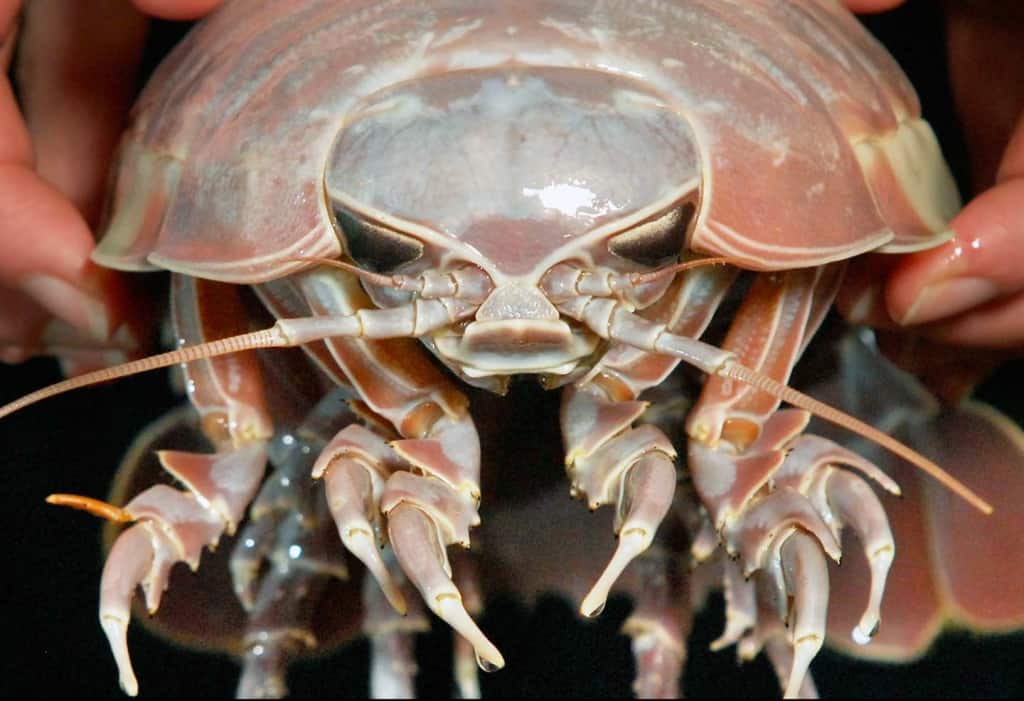 These creatures appear as if they could be stunt doubles for the aliens in popular sci-fi films. Giant Isopods are crustaceans that are distantly related to shrimp and crabs. They are thought to be plentiful in the deep waters, particularly colder, of the Atlantic, Pacific, and Indian oceans. They hold a similar look to that of the woodlouse or pill bug, just much bigger. They are important scavengers of the sea floor and it is likely that you won’t ever see one in the wild, but maybe in an aquarium. The weird creatures are carnivorous, feeding on dead whales, fish, or whatever might float to the ocean floor. Giant isopods are thought to be over 160 million years old, dating before the break-up of the supercontinent Pangea. For defense, giant isopods can curl up into a ball, leaving only their tough exterior shell exposed and hiding their less protected underside.