10 Of The Most Awesome Man Caves You’ll Ever See

For those who don’t know, the term ‘man cave’ refers to a male sanctuary – usually a spare room in a house, a basement or a garage – which is designed and furnished to the specifications of the man in question. These are usually used by men to indulge their hobby, as a place for some alone time, or just somewhere to hang out with friends. All this without a sensible female influence, meaning they are often referred to as ‘the last bastion of masculinity’.

Some men are lucky enough not to be restrained by budget when it comes to creating their personal spaces. For these guys, man caves can become things of incredible beauty and design. So if you ever win the lottery, or you’re lucky enough to be rich, maybe you could draw some inspiration from these pictures. These are the ten most awesome man caves you’ll ever see; until you create your own, of course. 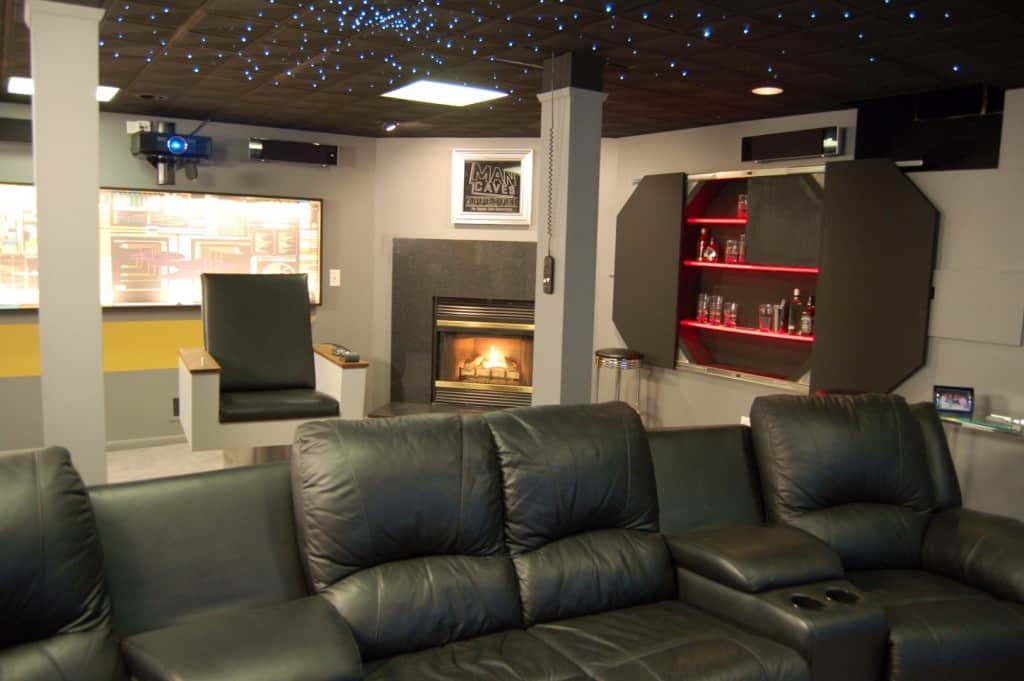 The owner is a sci-fi fan who based the design on a spaceship theme. At the back of the room there’s even a replica starship systems display. 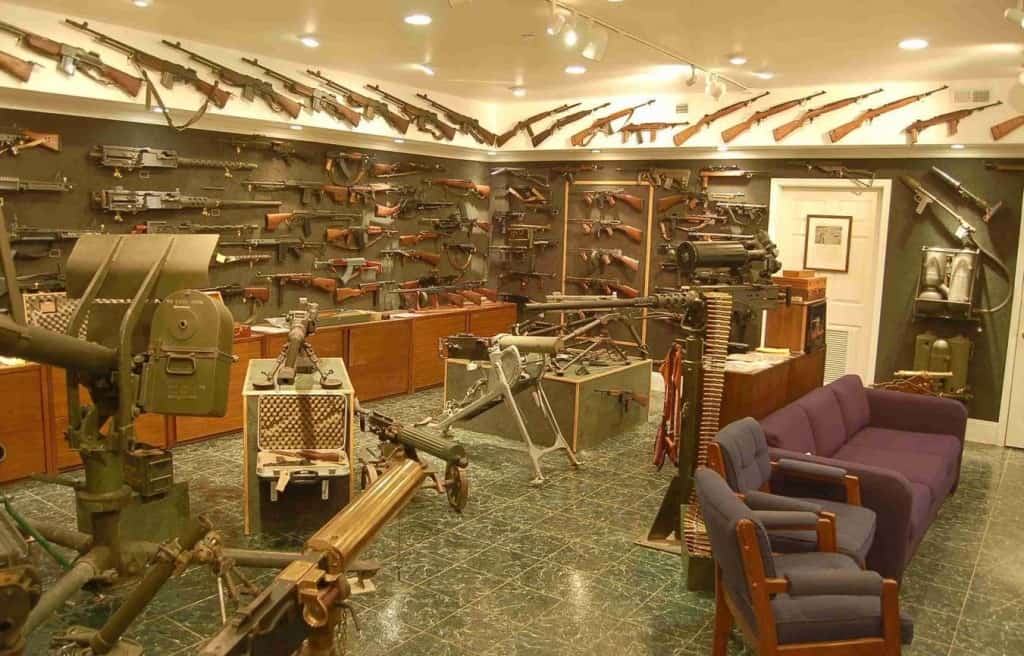 Man caves are often used as a place to store a guy’s collection of memorabilia. Normally these are things such as comics, sporting items, video games etc. but sometimes they can be less common collectibles – like guns.

With its selection of weapons from various eras, massive static machine guns, and even flame thrower on the wall; this is surely the worst house in the world for a burglar get confronted by the owner and their arsenal of weapons.

A brilliant cave for any fans of the horror genre. Not only does it have a spooky gothic look, but it also contains memorabilia from some of the most iconic horror movies ever made, including Freddy Krueger’s glove, his recognizable sweater, and Jason Voorhees’ mask.

While horror buffs will love the room, it still may still be a bit unsettling at night, particularly with Freddy popping his head up from behind the couch. 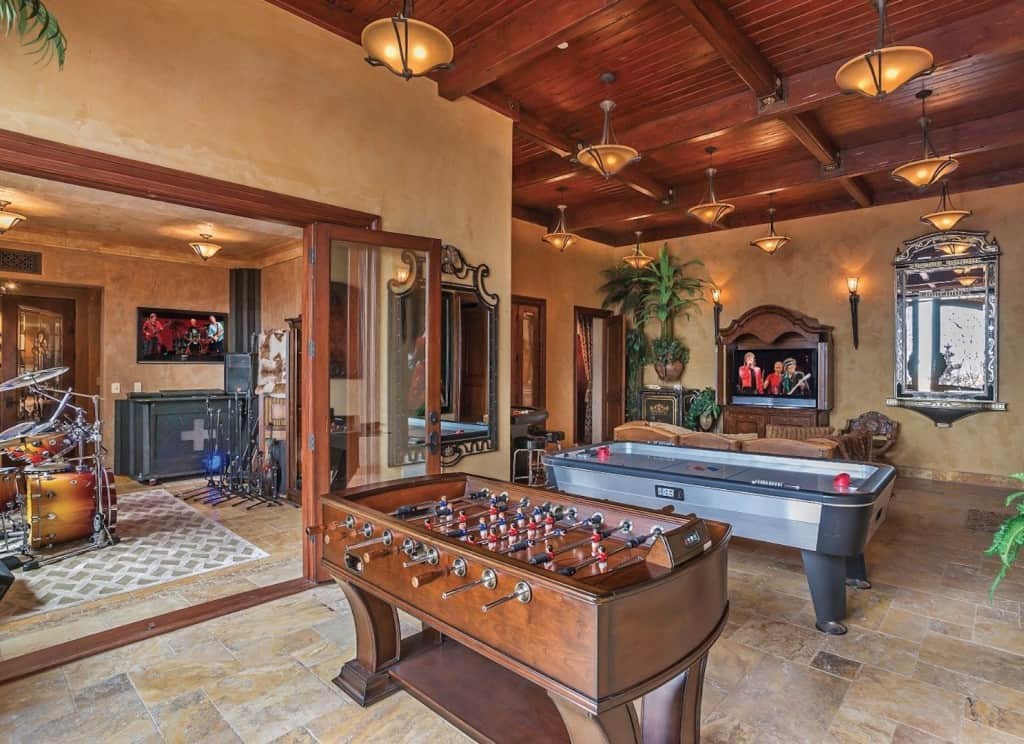 A lot of us would like a man cave with a soccer table, air hockey machine and drum kit in it, although most people wouldn’t be able to afford the quality of the ones shown here.

There’s also the wood paneling, the lights, the mirrors, the other instruments, and a blackjack table in the corner. This room may contain some big boy’s toys, but it still exudes class. 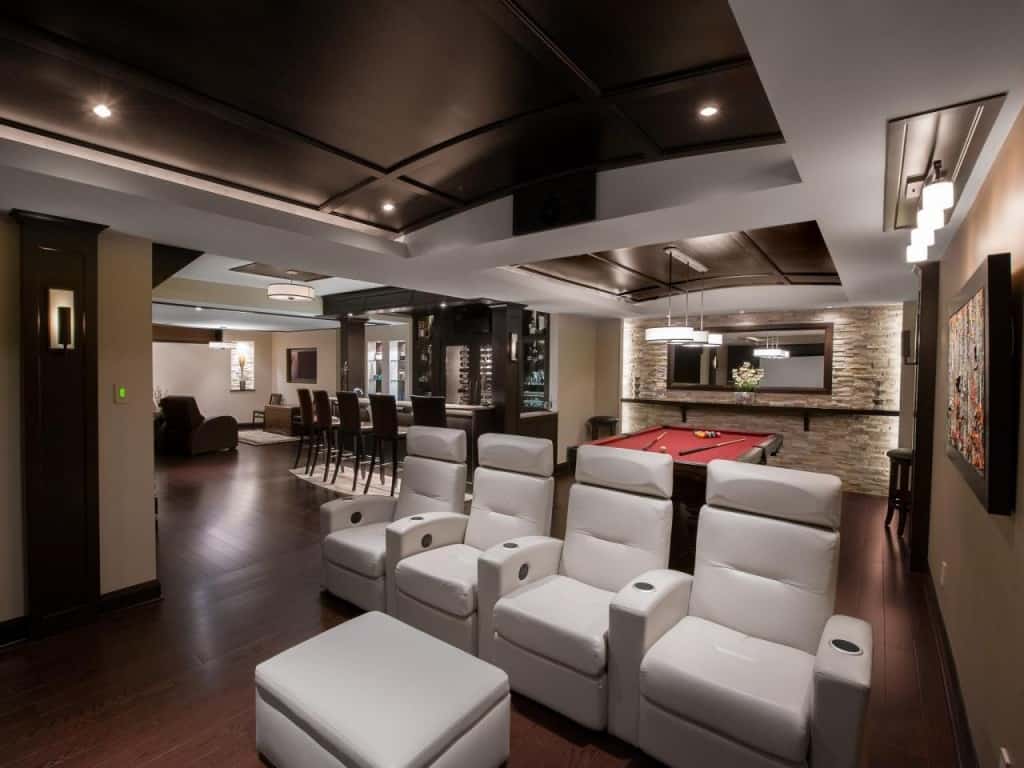 Another man cave for those who don’t find money an issue. The sheer size of the room means you can have a load of friends over, there’s plenty of activities to keep everyone occupied: shoot some pool, watch a movie on the big screen in those beautiful chairs, get drunk at the bar, or play video games on the TV that’s built into the wall. Awesome. 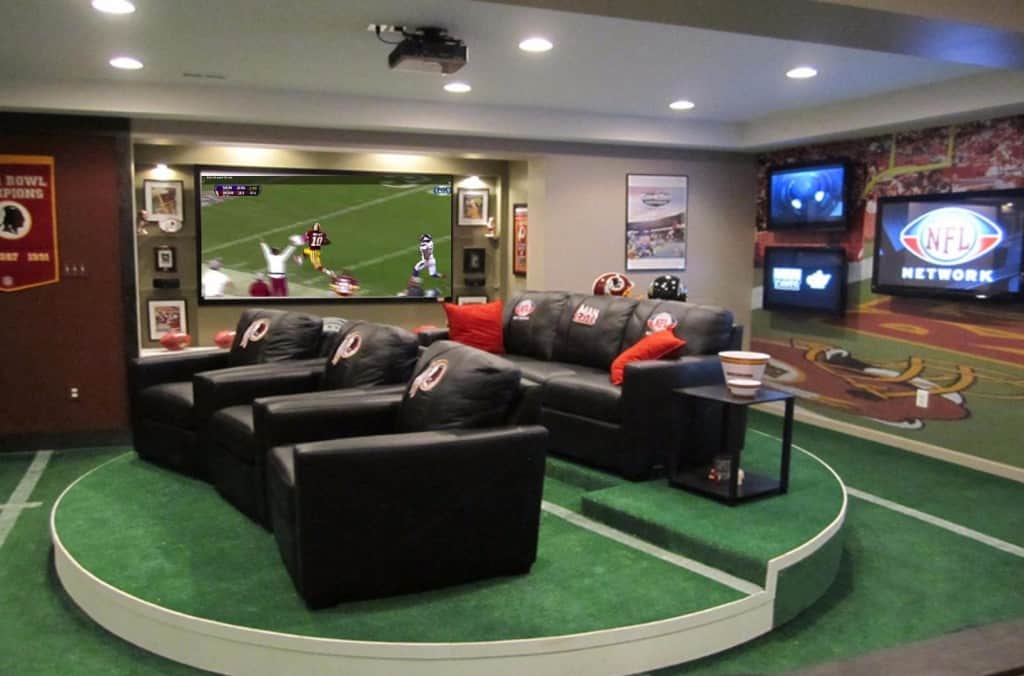 Could this be the greatest sports themed man cave ever? Not only is it filled with sporting memorabilia, but it also has football field-style carpeting.

And how many televisions can one room contain? As well as the big screen projector, there’s also at least three more TVs on the walls. Is this so people can watch several different games at the same time? To cap the room off, there’s a full length bar out of shot; the perfect accompaniment when watching your team.

For lottery winners only. Not only does this man cave contain a fifteen seated cinema, but also couple of replica Batman suits and a bookcase which slides back to reveal a full sized tumbler Batmobile.

What you can’t see in the picture is the private cylindrical stainless steel elevator with a glowing bat symbol, a secret tunnel exit, and some bat computers. It even has a fingerprint scanner for secure access. The whole room cost an estimated $2 million and is likely owned by Mr. Bruce Wayne. 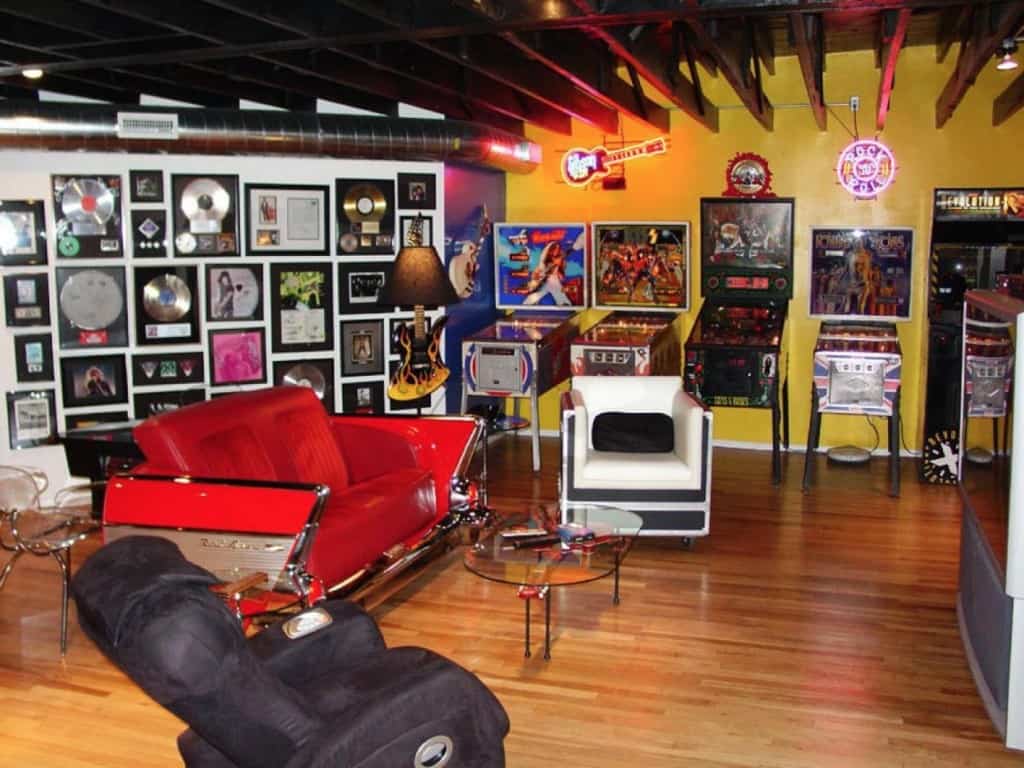 A man cave from a former rock star with a passion for pinball. The gold discs on the wall, the 50’s themed couch and the replica guitars shows his fondness for rock music.

Some of the pinball machines even have 80’s style hair-metal themes, harking back to this anonymous guitar legend’s glory days.

The guitar lamp, white chair, and finned sofa were actually designed and constructed by the owner. 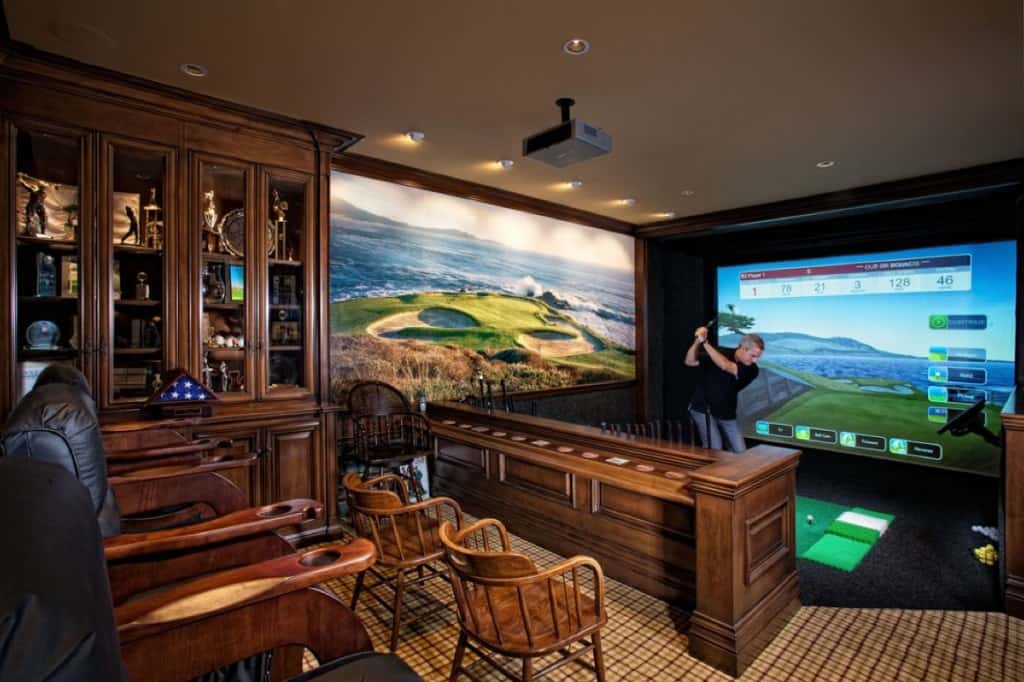 Golf can be a difficult hobby to transfer to a man cave; you may be able to stick some memorabilia and trophies in there, but you’re never going to be able play a few rounds. Unless, that is, you have this particular room.

The golf machine is as close to playing the real thing you’ll get without being on an actual course. And your friends can sit and enjoy the luxury while waiting to take their swing. Stick a few trophies and a huge course painting in there, and you’ve got the ultimate golfer’s man cave. 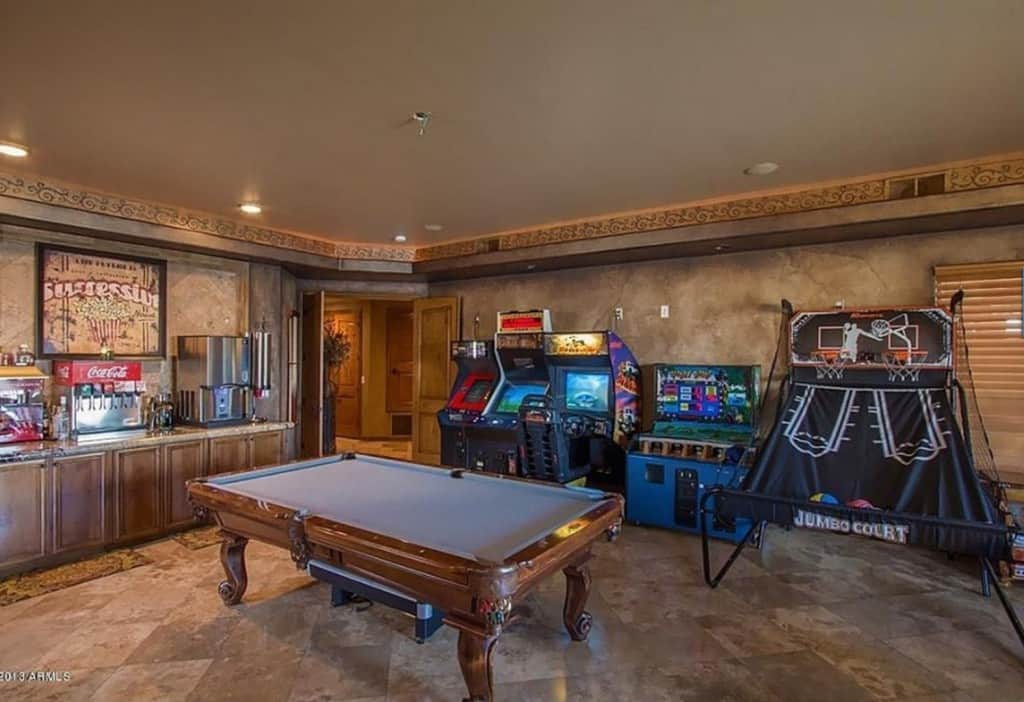 Fancy playing some pool on a very fancy table? Shooting some hoops? Or how about messing about on some old-school arcade games? All of these are possible in this beautiful gaming themed man cave.

Once you’ve had your fill of games, there a cinema’s worth of snack and drink machines available. Beware the game room, you may never leave.