South Park is entering its nineteenth season this September, after a successful experiment with continuity and ongoing storylines last year. In Season 18, the boys noticed that their world didn’t always go back to normal the next week. In fact, everybody seemed to remember Stan, Kyle, Cartman and Kenny’s misdeeds and shut them out. This shift in focus was warmly received. Max Nicholson of IGN stated: “South Park came into Season 18, guns blazing“.

But amidst all the social commentary and potty humor, it’s easy to miss the subtle character development, running gags and intricately written plot lines that have always existed in South Park. Series creators Trey Parker and Matt Stone have, in fact, crafted a rich and ridiculous world brimming with ever evolving storylines. While we wait for the new season to begin, why not check out our list of the best ongoing and one-off story arcs from the South Park universe? 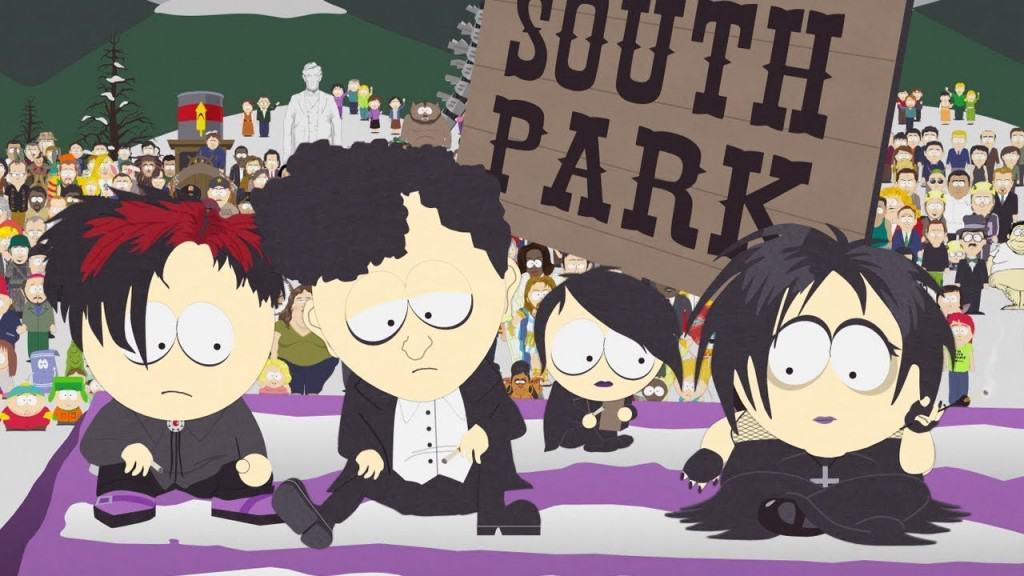 Since their initial appearance in Season 7’s Raisins, we’ve watched the Goth kids develop from wooden stereotypes into complex characters capable of carrying their own episodes. Their self-identification as “goths”, and how that makes them different from their peers, is a common theme in their episodes. 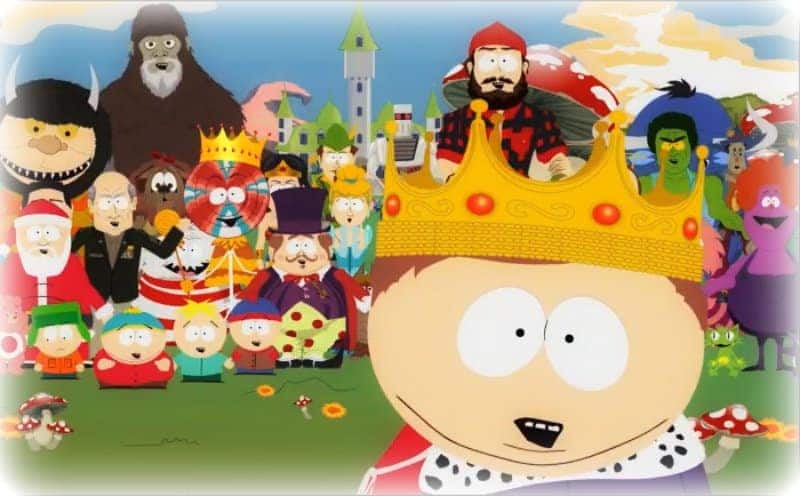 The Imaginationland trilogy won an Emmy award for Outstanding Animated Program for One Hour or More, and it’s easy to see why. The trilogy is easily among the most creative and entertaining entries to the South Park universe.

After capturing a leprechaun, the boys are taken to a mysterious place called Imaginationland, where all imagination has become reality. Unfortunately, a group of terrorists attack its fanciful inhabitants, destroying a wall that kept all of the evil imaginary characters at bay. Worst of all, the adorably demented Christmas critters are among their ranks. 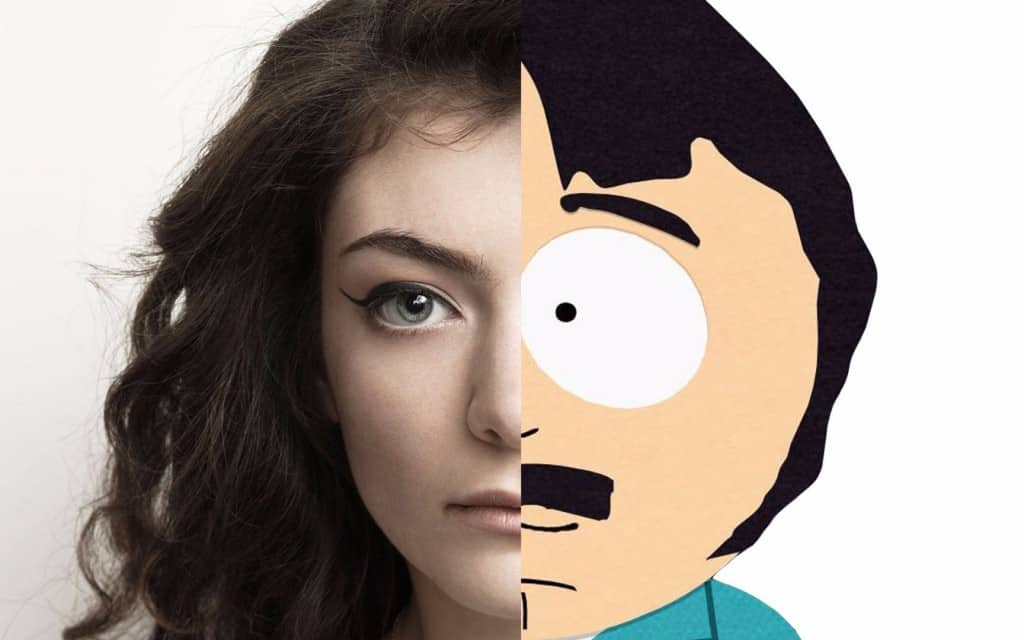 What started as a throwaway joke became a central part of the continuous plot of Season 18. In Gluten Free Ebola, Randy promises to get singer-songwriter Lorde to appear at a party the boys are throwing. He is, obviously, unable to deliver. At the party, he dresses in drag and pretends to be the young pop star, singing a song with lyrics that mostly consist of the phrase “I am Lorde. Ya, ya, ya.“

At least, that’s what the joke was intended to be. Brennen Carly, a writer for Spin magazine, misinterpreted the episode as a personal attack on Lorde, believing it inferred she was actually Randy in drag. The South Park team fired back the very next episode, fully embracing the idea that Randy is living a double life as the singer. A suspicious reporter for Spin magazine named Brandon Carlile attempts to uncover the truth about Lorde, but ultimately decides not to publish his story. Spin magazine apologized for reacting so defensively to a joke that wasn’t even there. 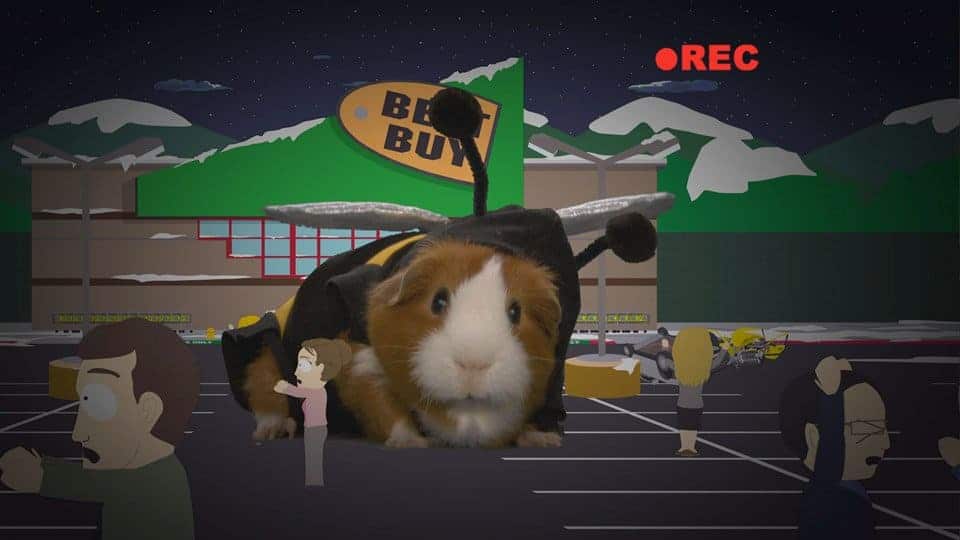 The Pandemic episodes not only parodied found footage films, they served as a critique of the show’s format itself. Throughout the episodes, Craig, usually reserved as a background character, calls out the series four protagonists, pointing out that their irresponsible behavior makes them run into these situations in the first place. 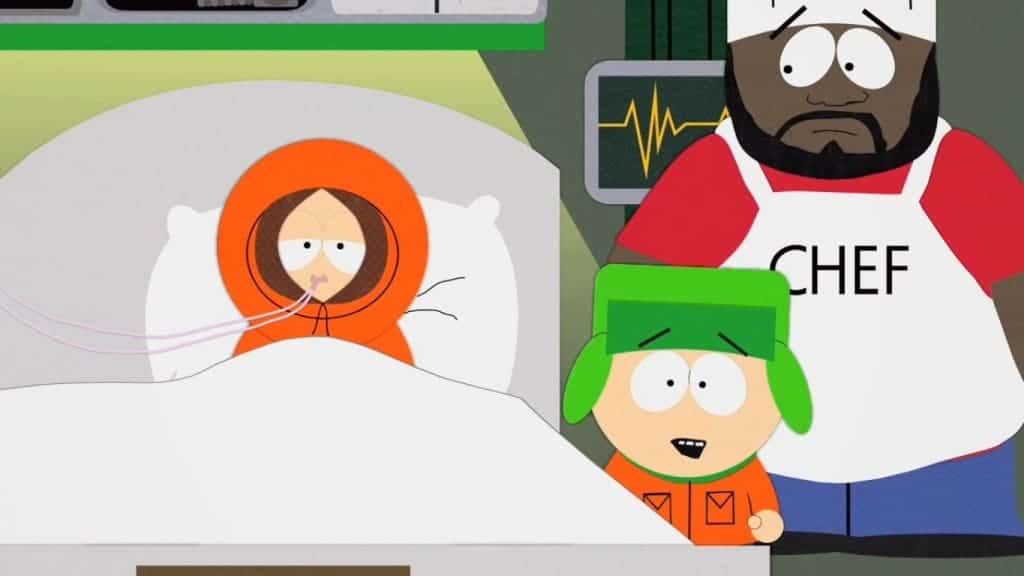 Who doesn’t have a soft-spot for Kenny? He’s selfless, vulgar, and somewhat more grown up than his friends. But when Kenny died for good (kind of), his temporary replacement, Twitch, proved to be an equally good fit for the group. Fan favorite Butters Stotch also gained a more prominent role in Kenny’s absence.

Though he was dead, Kenny’s trademark outbursts lived on through Cartman, who ingested Kenny’s soul believing it was chocolate milk. When Kenny finally returned, there was no explanation as to why he was gone.

Mysterion vs. The Coon 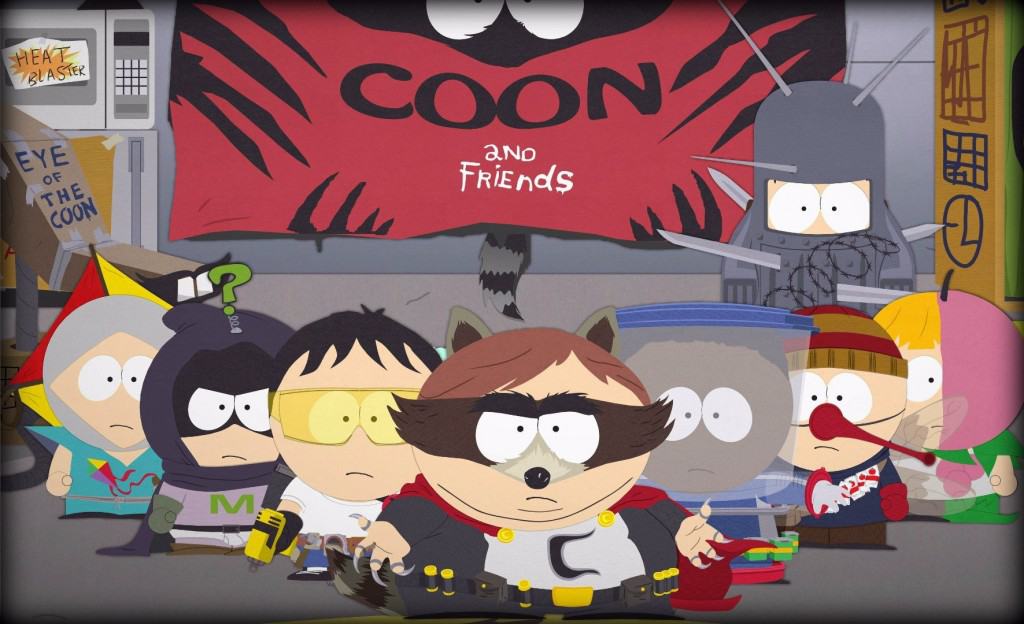 What started as the one-off episode Professor Chaos, turned into a sprawling, multi-episode satire of the super hero genre that parodied films like The Dark Knight and Watchmen. The Coon & Friends trilogy gave us an origin story for the immortal Kenny, and a highly entertaining rivalry between Kenny and Cartman’s alter-egos, “Mysterion” and “The Coon”. 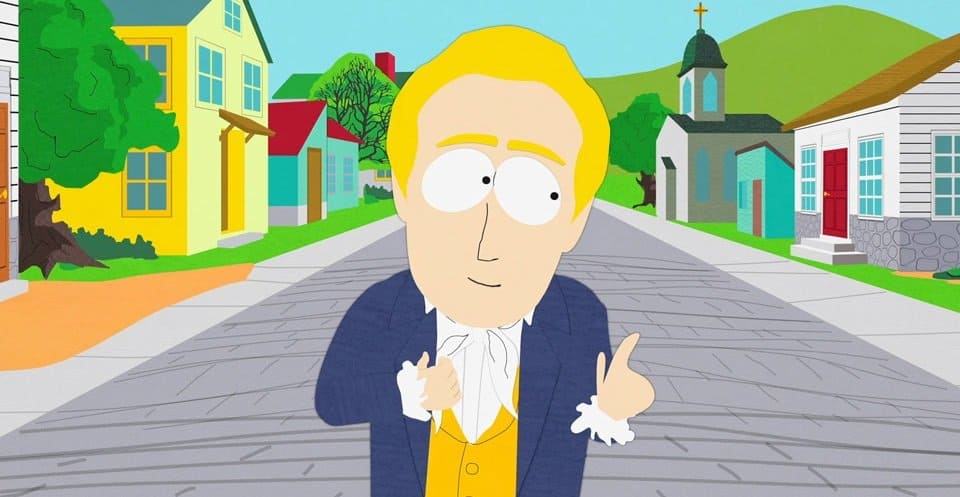 Mormons occupy a special place in the South Park universe, being the only Christians who go to heaven. Creators Matt Stone and Trey Parker have a unique relationship with the LDS Church, on the one hand deriding their beliefs as ridiculous, and on the other sweetly commending them for their wholesomeness. 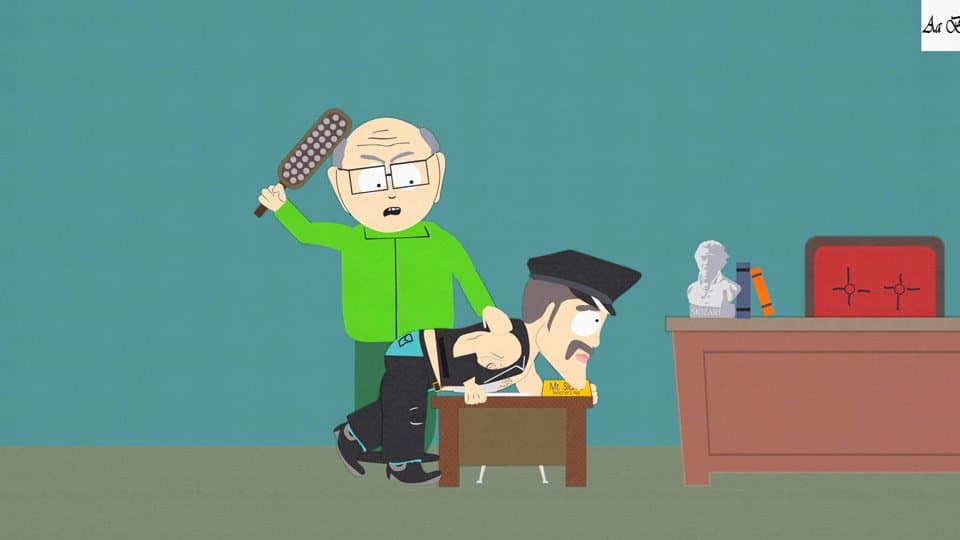 From the beginning, it was clear that Mr. Garrison housed some deviant sexual tendencies that he tried desperately to hide. It all eventually ballooned into two sex change operations, two or more sexual orientations and a wide array of disturbing kinks and unusual sexual partners – like Mr. Slave. 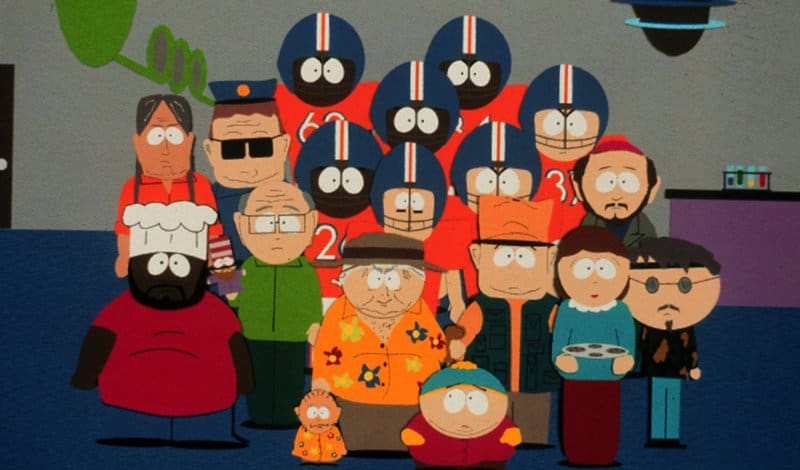 Who is Cartman’s father? The mystery began in the Season 1 finale episode Cartman’s Mom is a Dirty Slut. Cartman’s mother tells him his father is a Native American chieftain, but he soon finds out most of the town had slept with her the night he was conceived. Even Jesus and the 1994 Denver Broncos were contenders. The episode ended with a cliffhanger, but when Season 2 premiered, the episode Terrance and Phillip in Not Without my Anus aired as an April fools prank. Comedy central received over 20,000 complaints from angry fans who expected to learn the identity of Cartman’s father.

In Cartman’s Mom is Still a Dirty Slut, the identity of Cartman’s father is revealed to be his mother, a hermaphrodite. This would prove to be a red herring, however. In one of South Park’s greatest twists, Mr. Hat reveals the truth about Cartman’s father had been covered up. It turns out, Cartman’s father was a member of the 1994 Denver Broncos, Jack Tenorman, whom Cartman had killed eight seasons earlier in Scott Tenorman Must Die.

Many fans are unaware of this plot twist, as it occurred in the now banned episode, 201. 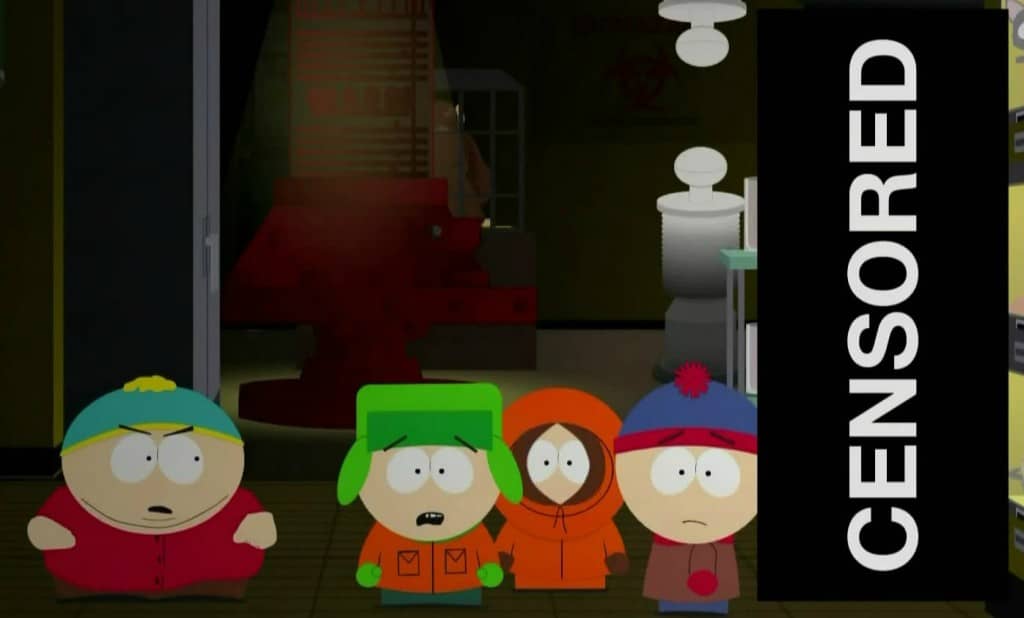 Real life events made the message of Season 14’s 200 and 201 far more potent. In a series of episodes that took aim at censorship and over-sensitivity, several key plot elements were censored by Comedy Central. This included an image of the Muslim prophet Muhammad, considered obscene by various sects of Islam. A website run by a fringe religious group threatened violence against Comedy Central and the South Park staff if the image aired. Matt Stone and Trey Parker stood behind the episode, but the network caved and censored the images, along with Kyle’s final speech – which became nothing but one long bleep.