20 Unbelievably Strange Ads That Have Appeared On Craigslist

Craigslist first opened its doors in 1999 and has since grown into one of the most popular sites on the web. It is essentially the same as the classified advertisement section you would find in a newspaper but because of its widespread reach and large audience, it caters to a much larger range of hobbies, activities and tastes than more traditional classifieds.

This has led to a huge array of odd and strange postings on Craigslist. Some of them involve people trying to sell weird items, others are people trying to acquire services that people are offering while a select few see ads that are just requesting information or help. This is a collection of the strangest and most bizarre ads that have been posted on Craigslist throughout its life. 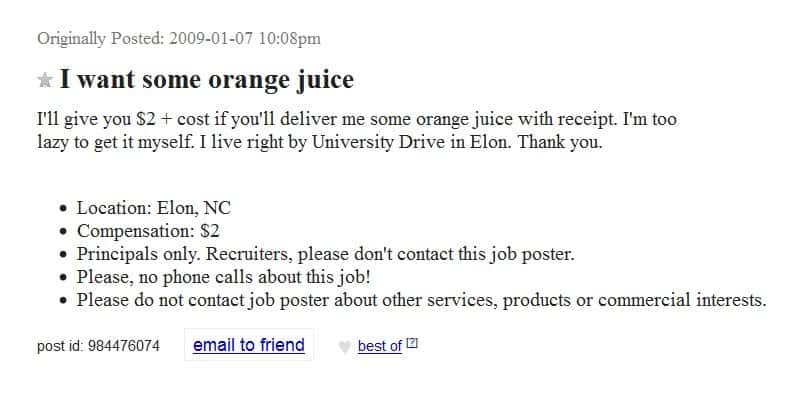 A self-confessed lazy fellow really does want some orange juice. 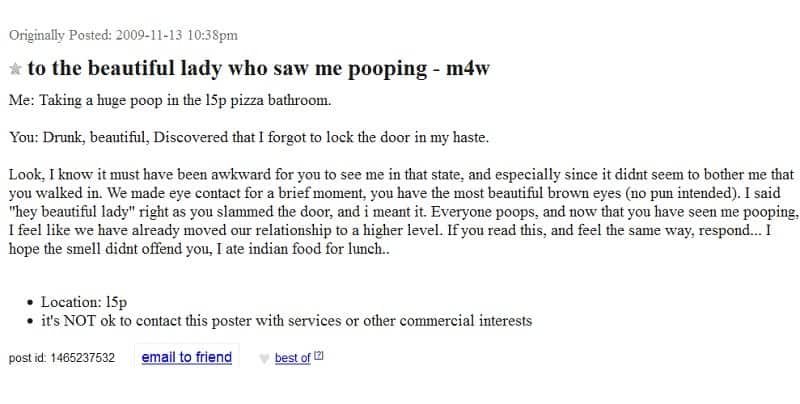 This guy just wants to find the woman of his dreams after one fleeting, yet smelly, encounter. 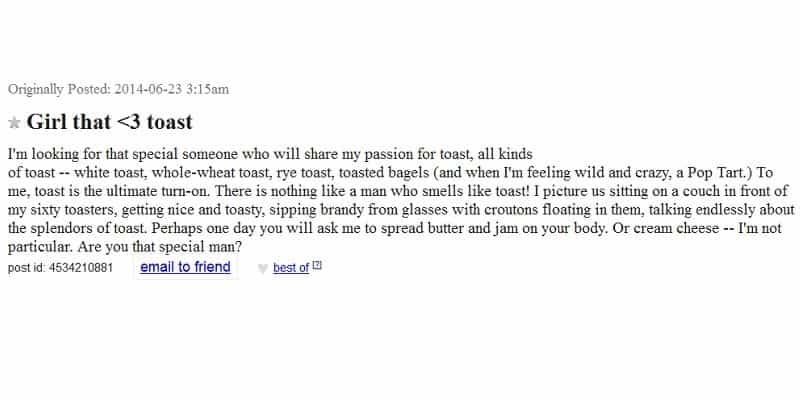 Everyone has particular characteristics and traits that they like to see in a partner, but what could be more important than a love of toast? 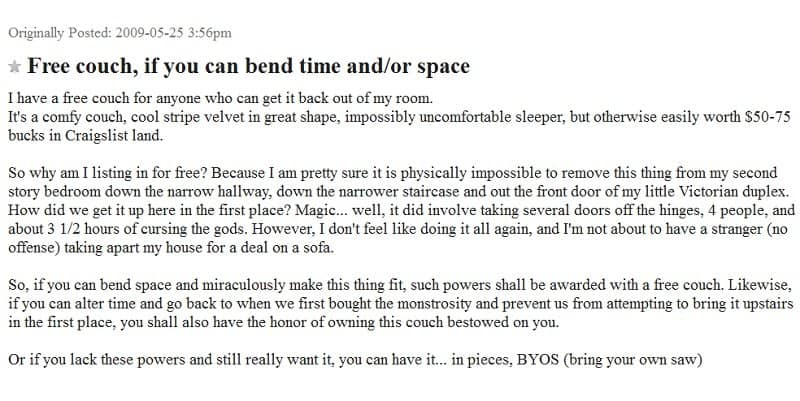 Struggling to get furniture in and out of homes can be incredibly tricky, especially if you live in an apartment complex, so one man has come up with a genius solution to get rid of an unwanted sofa. 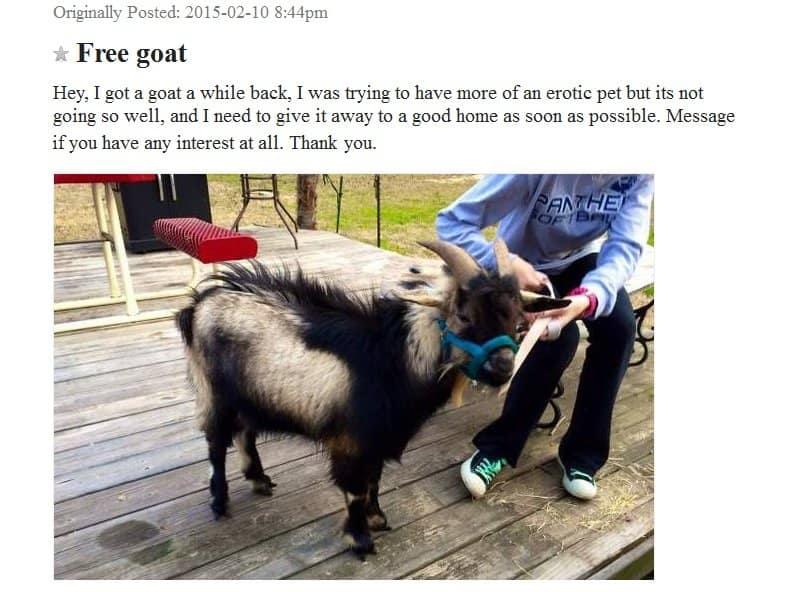 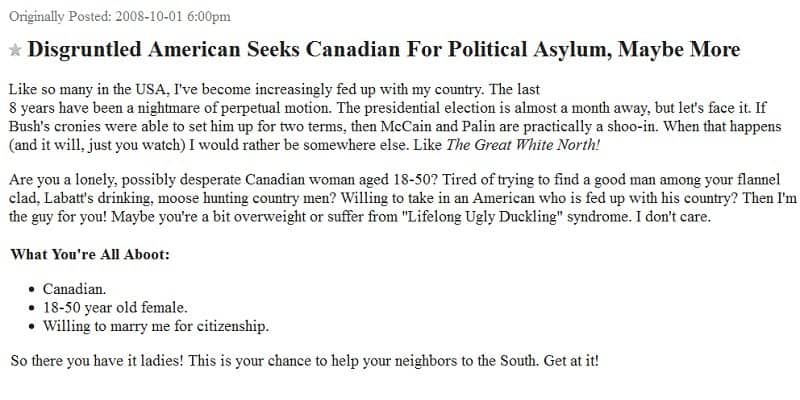 Canadian women who hadn’t found their perfect man got the opportunity to hook up with this American who had grown tired of his home country. 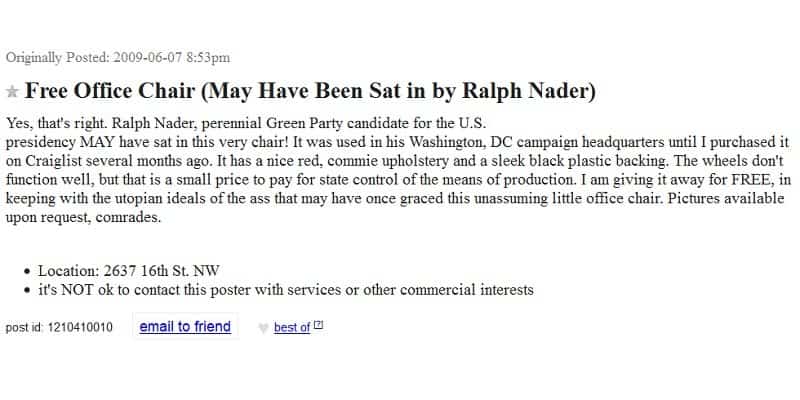 Who wouldn’t want a chair that Green Party candidate Ralph Nader might have actually sat in at some point. 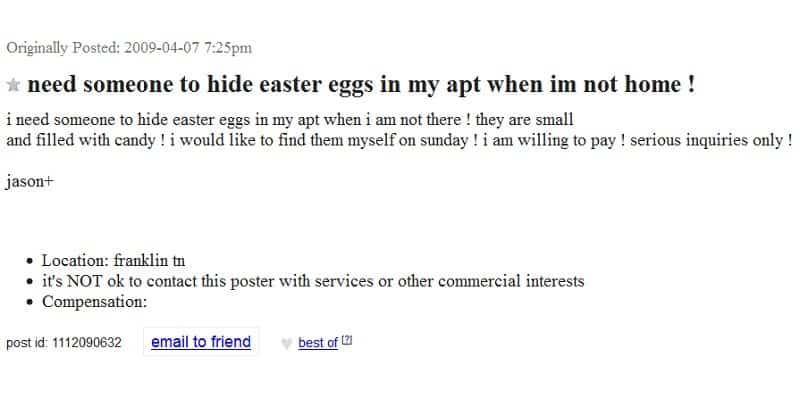 For some people, the thrill of searching for chocolate eggs on Easter Sunday just never leaves them. 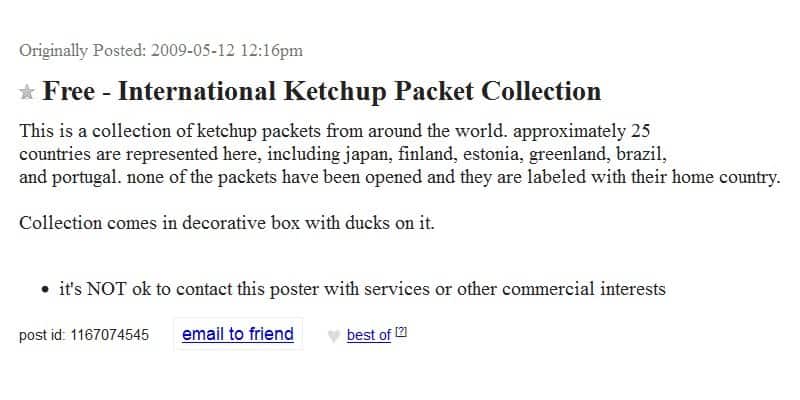 Possibly the greatest collection of tomato ketchup packets in the entire world. 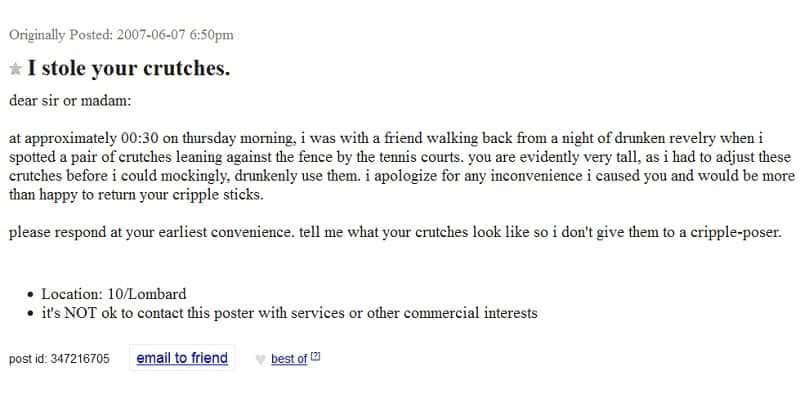 This man seems to want to do the right thing after stealing some crutches. Although he somewhat fails to be as kind as he wants to be thanks to his choice of words. 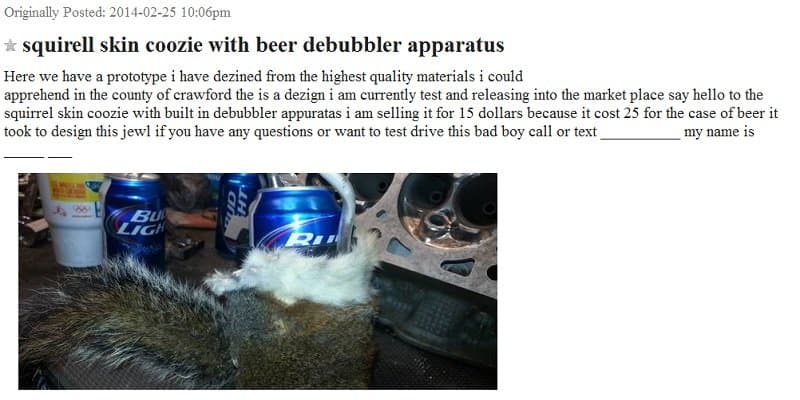 The perfect way to store your beer is, of course, in a custom made squirrel skin holder. 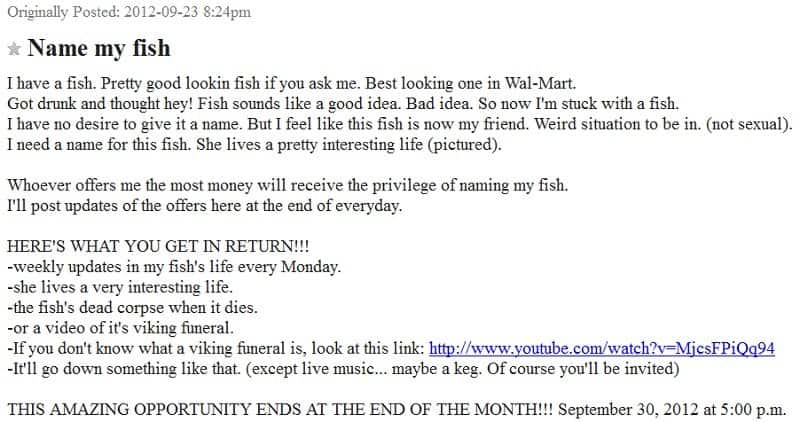 One man offered a once in a lifetime opportunity for someone to not only name a fish but also get constant updates about its well-being. 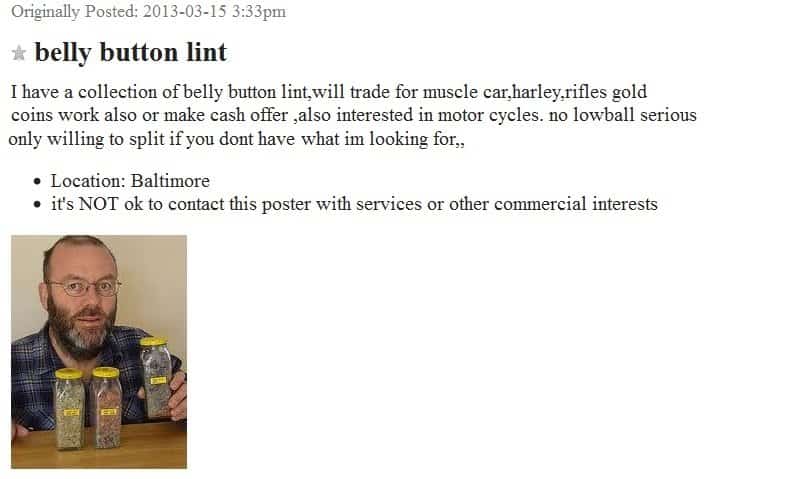 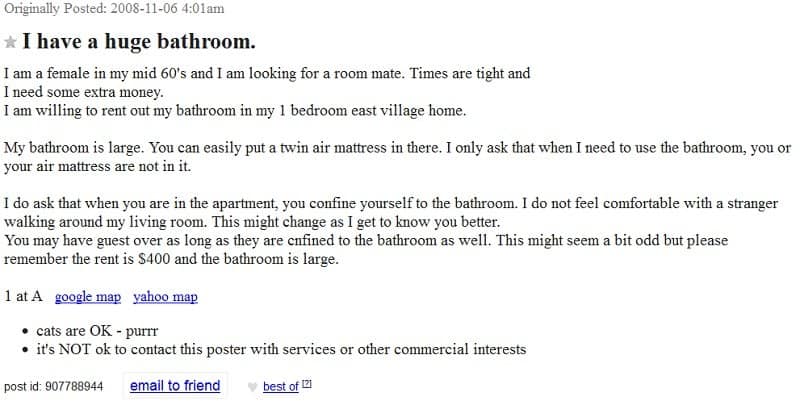 Ever wanted to live exclusively in a bathroom and have no interaction with anyone else in the building. Then you’re in luck.

Too Busy To Text 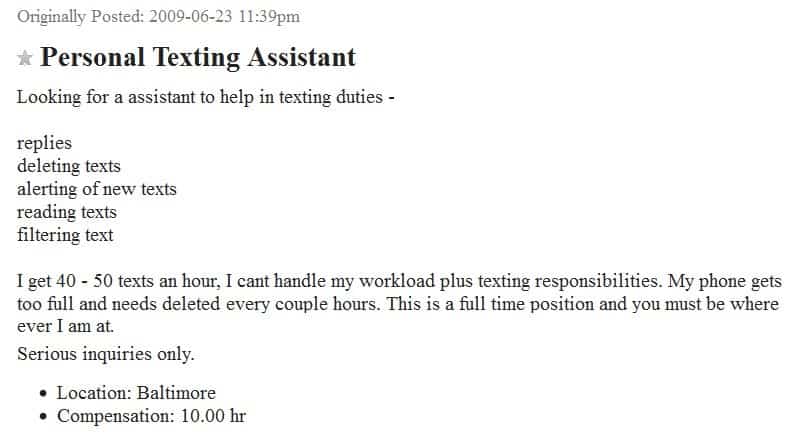 Some people are so popular that they can’t manage their own phones due to the sheer amount of texts they receive. 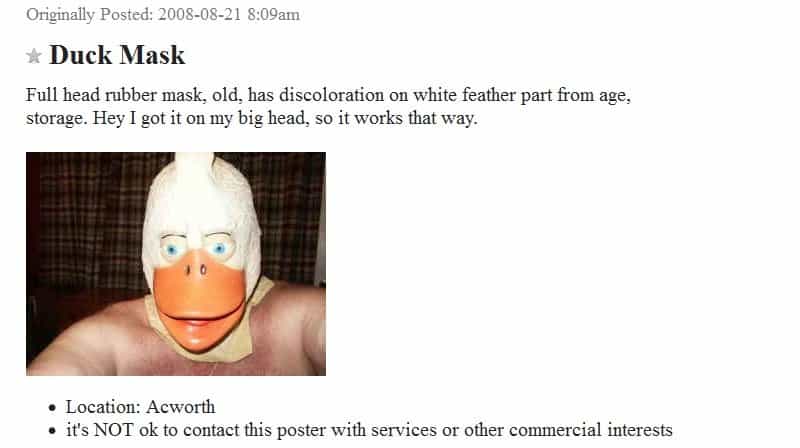 This creepy duck mask could have been yours in 2008, as long as you didn’t mind the slightly discolored feathers. 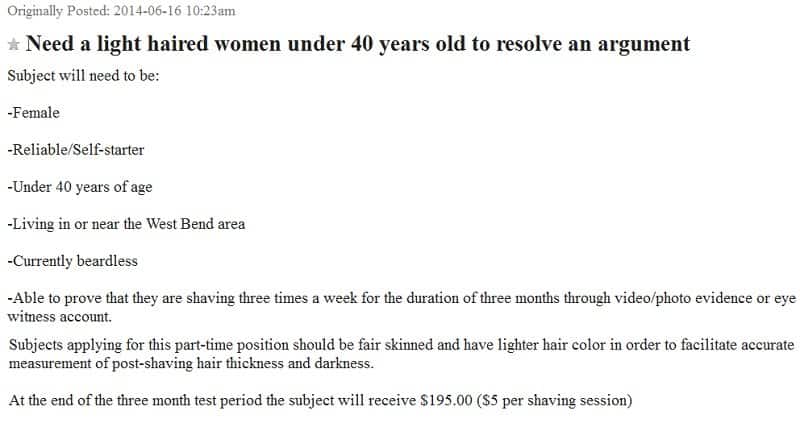 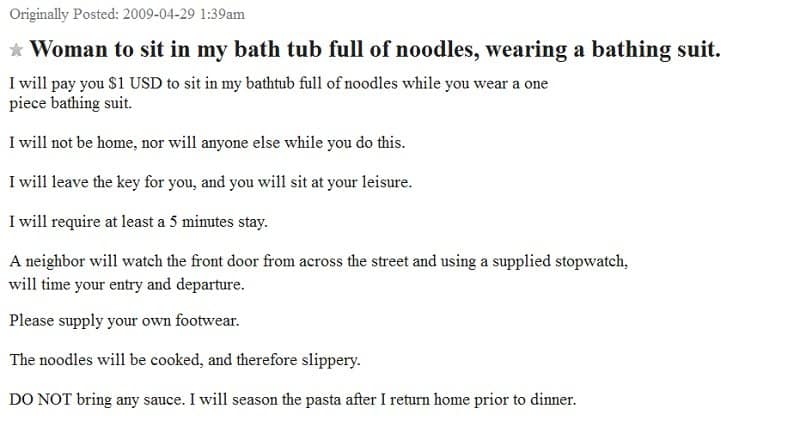 Just don’t try to cheat this guy out of the full 5 minutes required, as the neighbor will be watching you with a stopwatch. 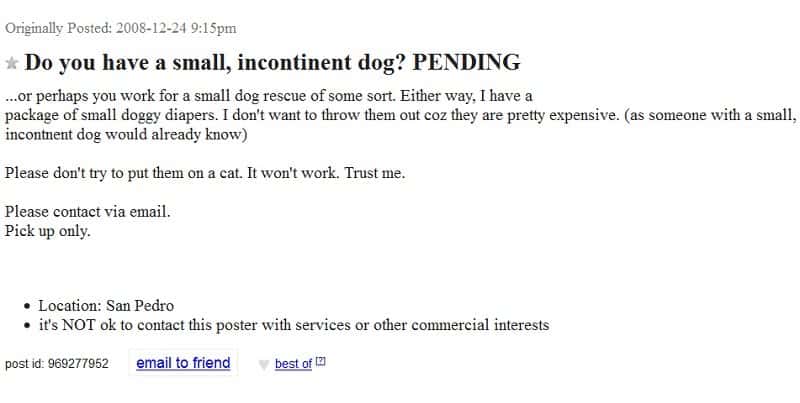 If you happened to have owned a dog that couldn’t control its bladder in 2008, then you could have gotten a great deal on some diapers

Who would have thought that it was possible to get paid to clown around and get drunk in bars?