20 Ingenious Guitars That Will Rock Your World

The world is full of unique people who like to own one-of-a kind things. And let’s be real, with all the strange, bizarre and crazy people in this world it’s fair to say that musicians – especially rocks stars, seem to top the list. When you’re performing for millions of people, you often want to impress them not only with your musical ability, but you also want them to see things that will blow their minds — these 20 guitars will definitely do the trick! 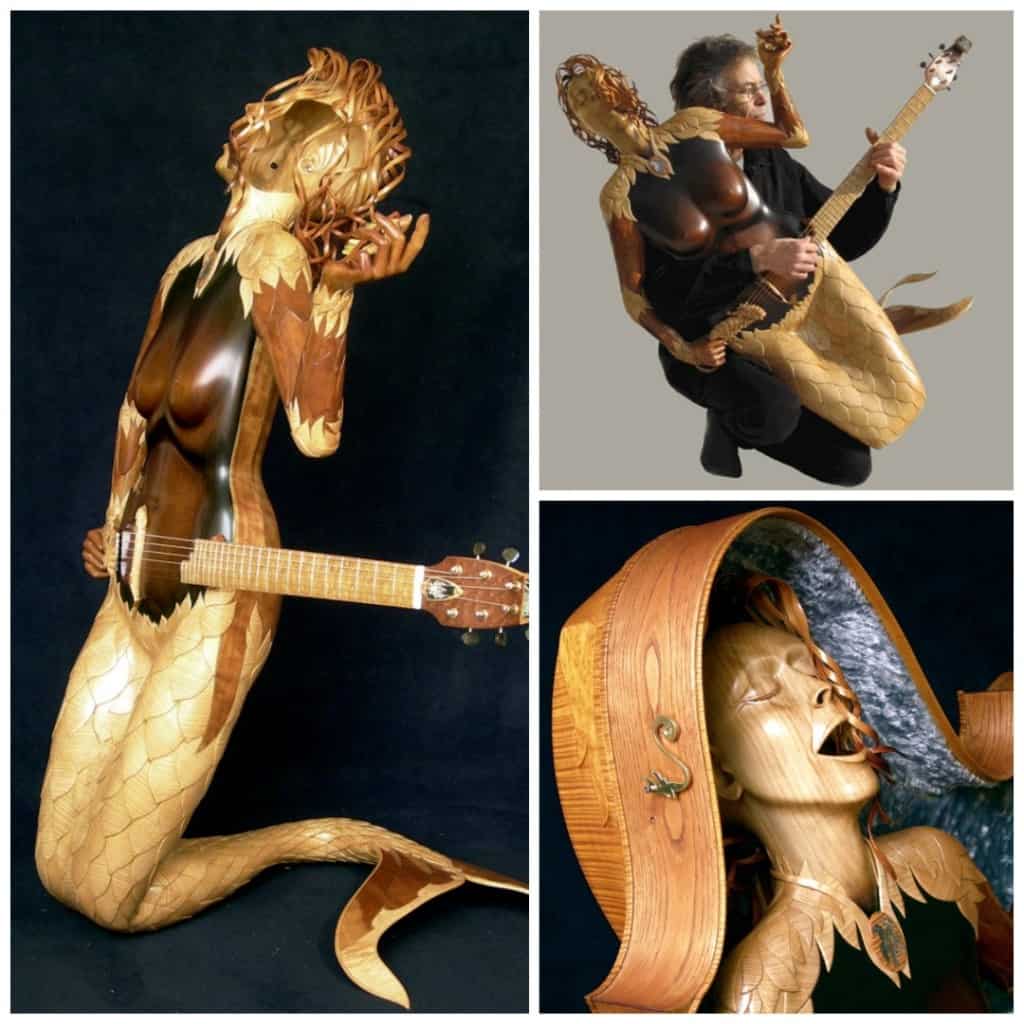 It took Andy Mason over 2 years and 14 different types of wood to make this mermaid guitar.

The musical instrument weighs 9 pounds and each scale on the mermaid’s tail was individually carved. Andy also created a custom case for this work of art. 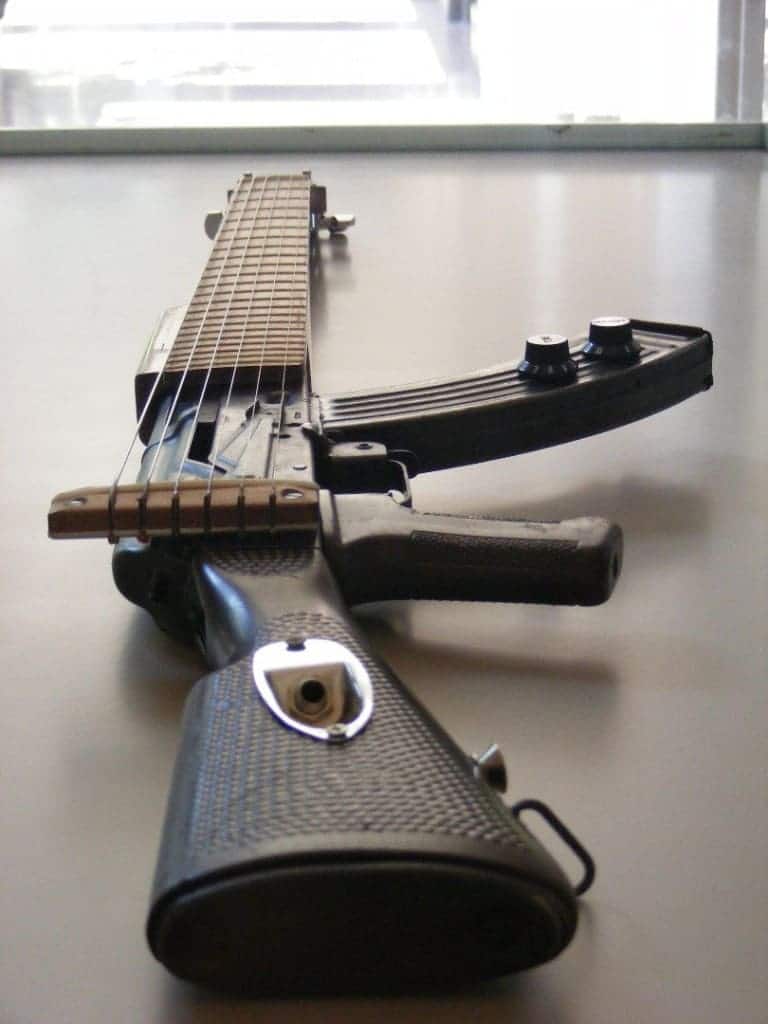 Rob Baker is a custom guitar-maker who can pretty much carve a guitar to look like anything you want — case in point this true to life AK-47 guitar. 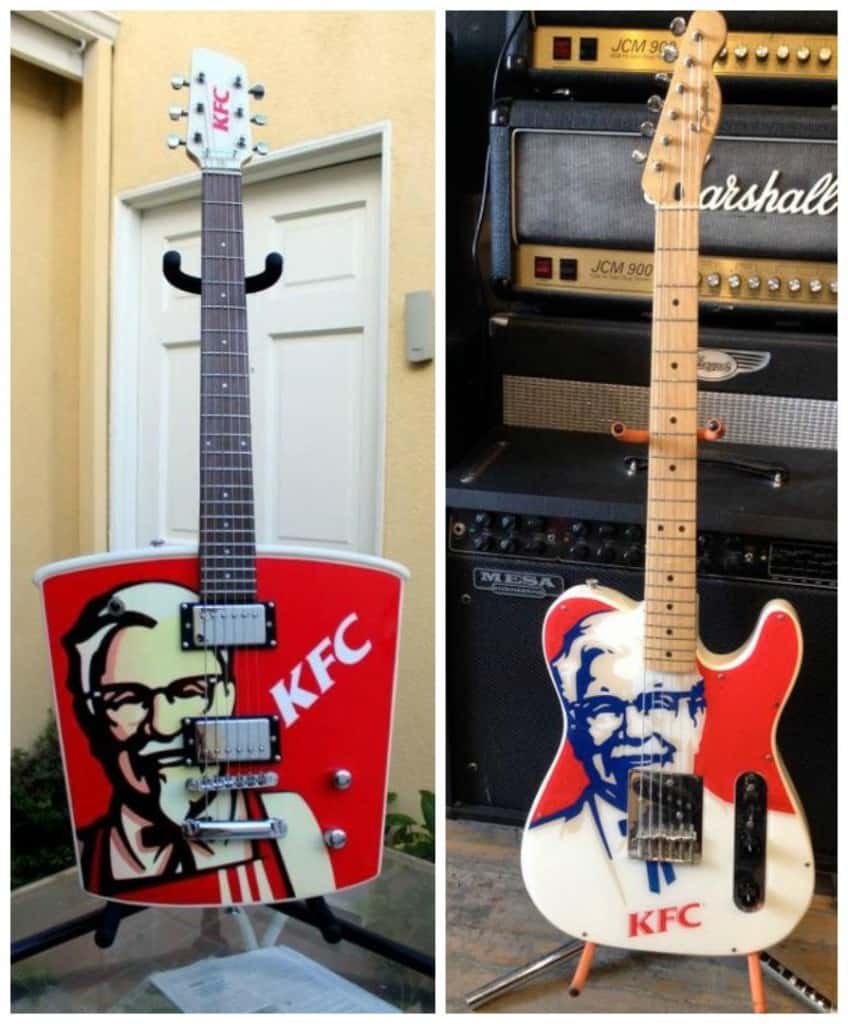 This one probably makes your mouth water every time you look at it.

I’m not sure if KFC is getting a commission from these yummy looking instruments, but hey nobody does it better! 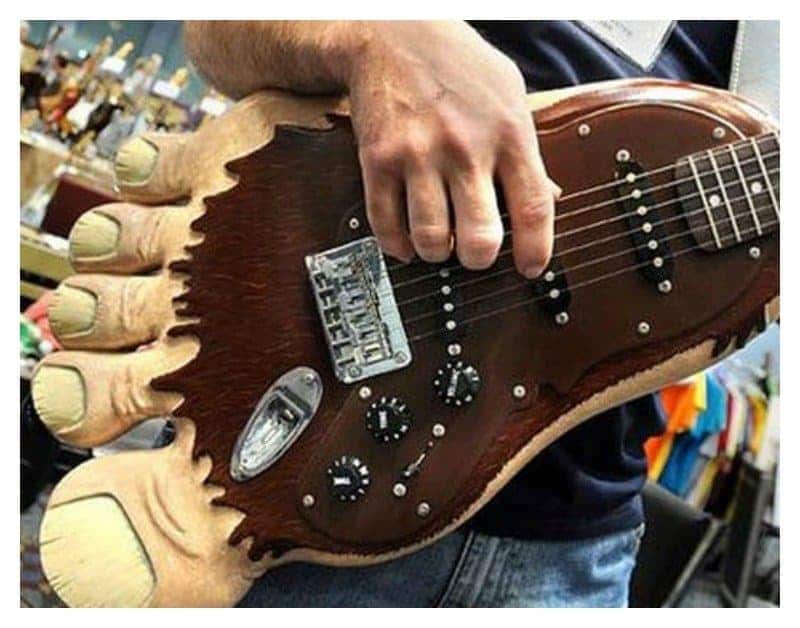 It’s not clear who made this guitar or why, but it’s obvious that this musical instrument was either inspired by Sasquatch or someone with very ugly feet. Play on Bigfoot… play on! 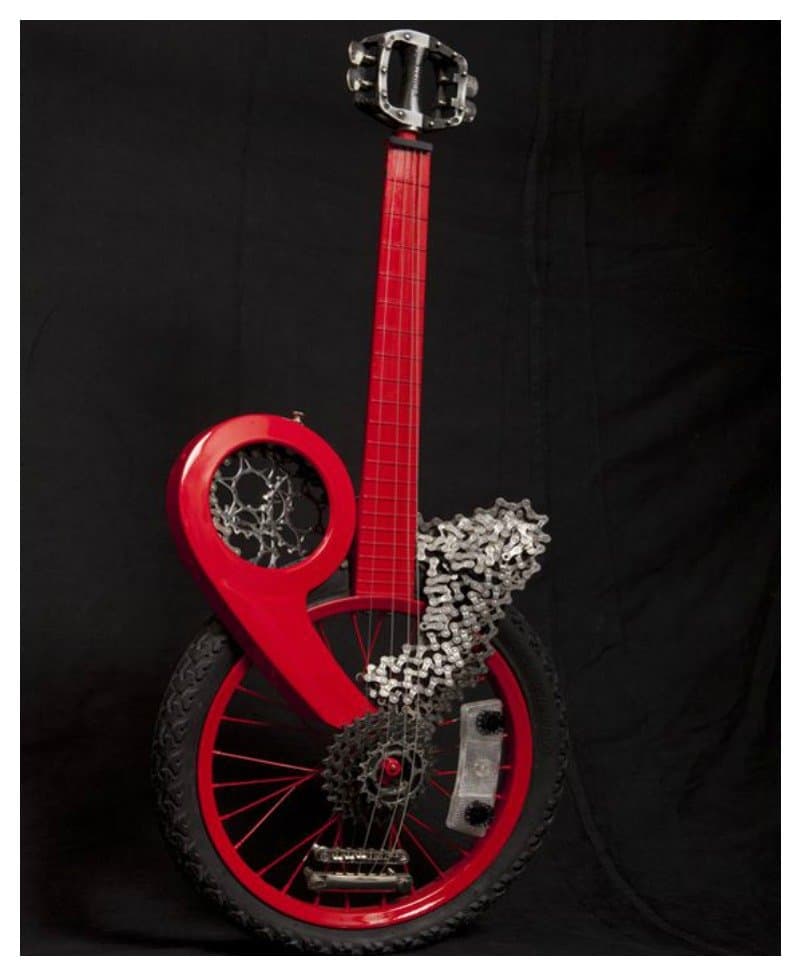 As the name suggest, this unique piece of art was actually fashioned out of bike parts. Just don’t try to ride it! 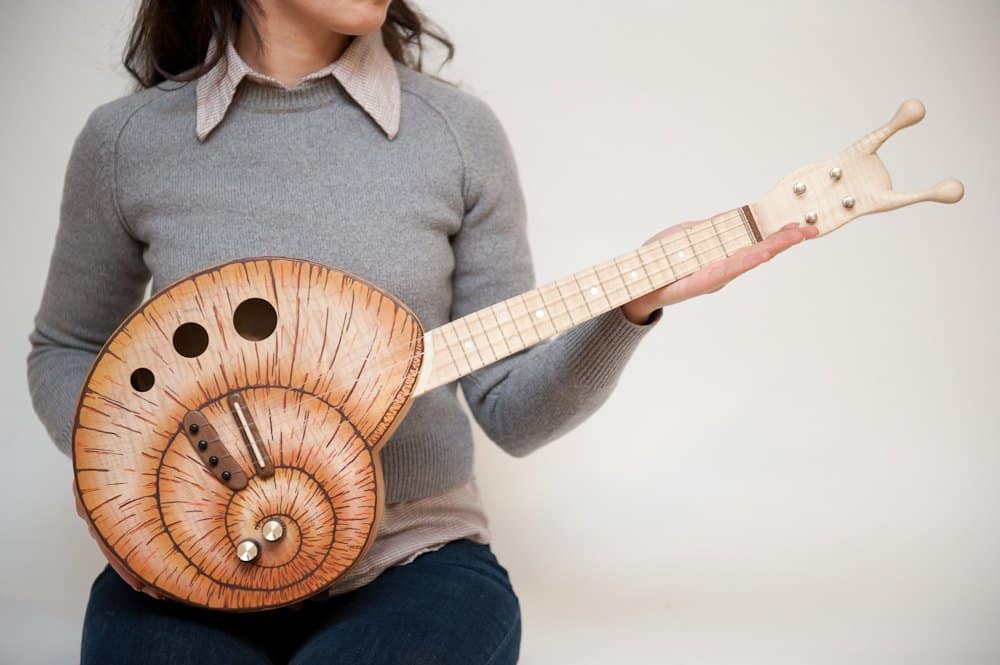 This hand-painted guitar is made from both hard and soft maple and sells for about $800. Known as the ‘Snailele’ it is a baritone, tenor, acoustic, electric, ukulele guitar. Wow! 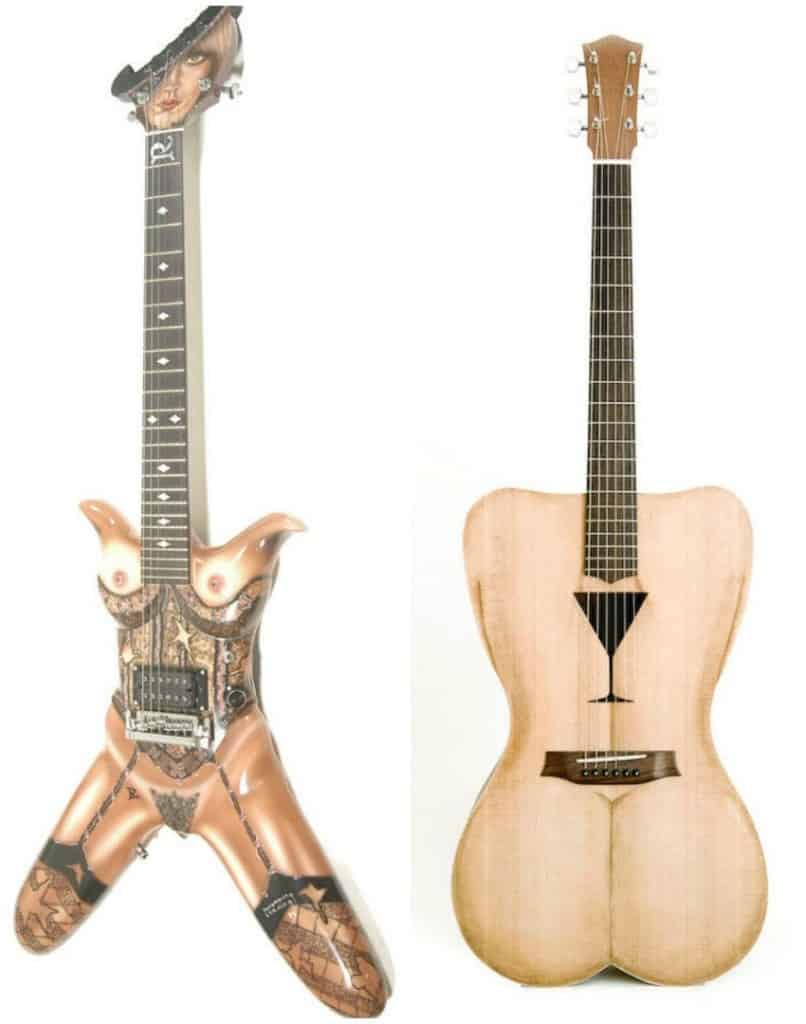 Apparently men often name their musical instruments after a woman, so it makes sense that they would want one that also reminds them of the female form. 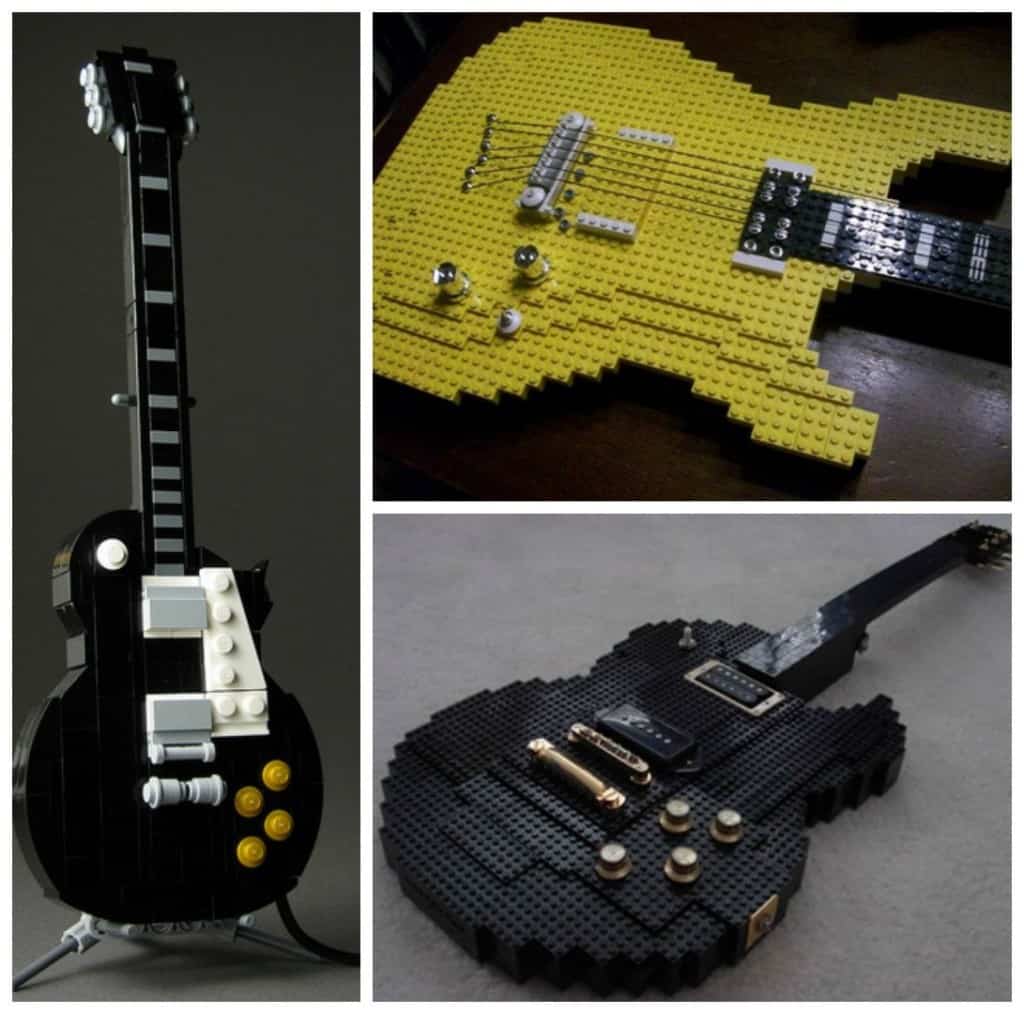 Millions of people around the world are fans of Lego, so it’s not surprising to see so many Lego inspired guitars.

The Gas Can Guitar 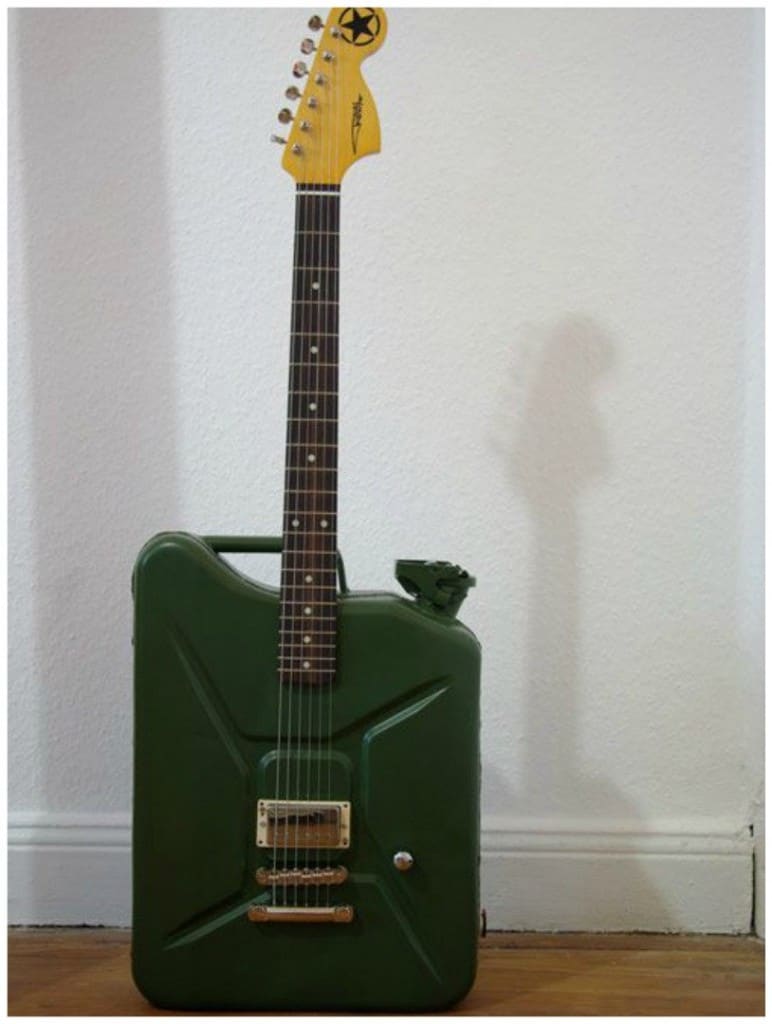 Musicians are hot and so are their guitars, but this one might just be the hottest of them all, literally.

This Gas can guitar is made from an actual gas can. Hey it might be flammable but it’s pretty darn cool. 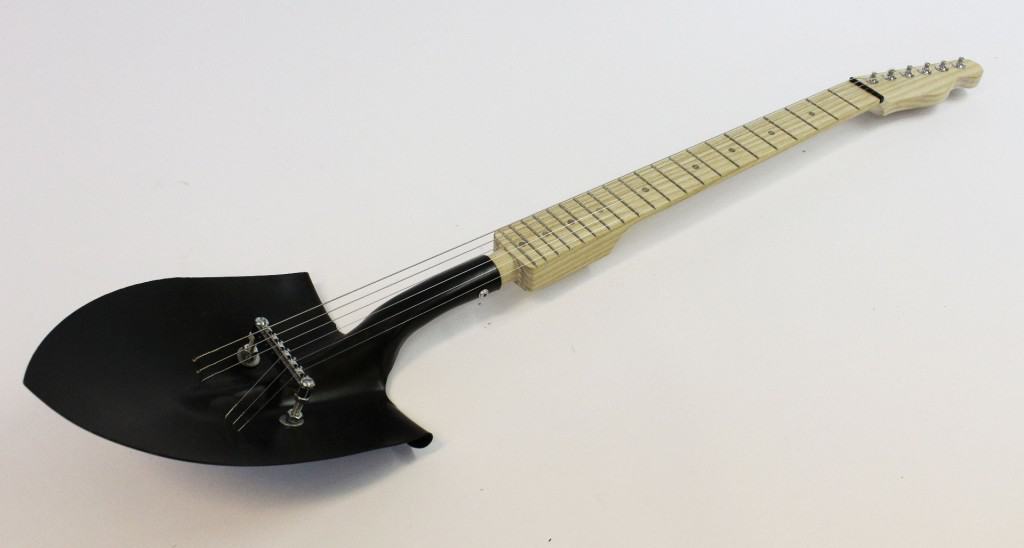 What do you do when you have an extra shovel just laying around in your garage? You turn it into a guitar of course!

This guitar shovel was actually designed and built by Sean Mair. 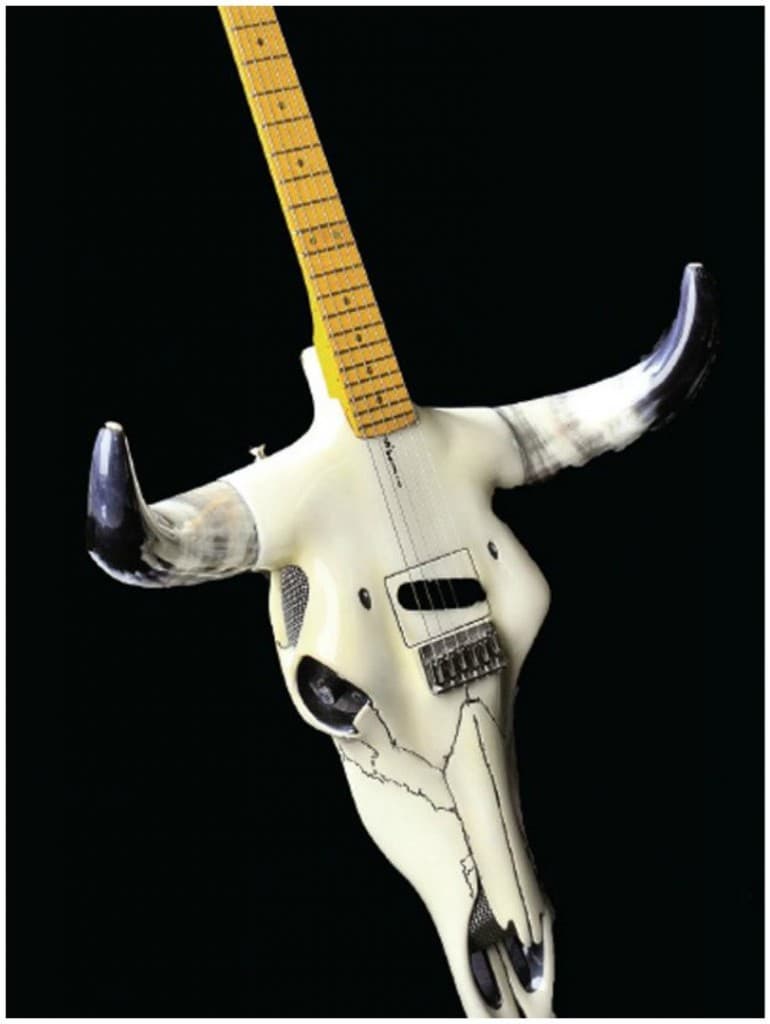 This bovine inspired cow-caster guitar was actually custom made as a tribute to musician Billy Gibbons. It was designed and built by artist Brent Gandy. 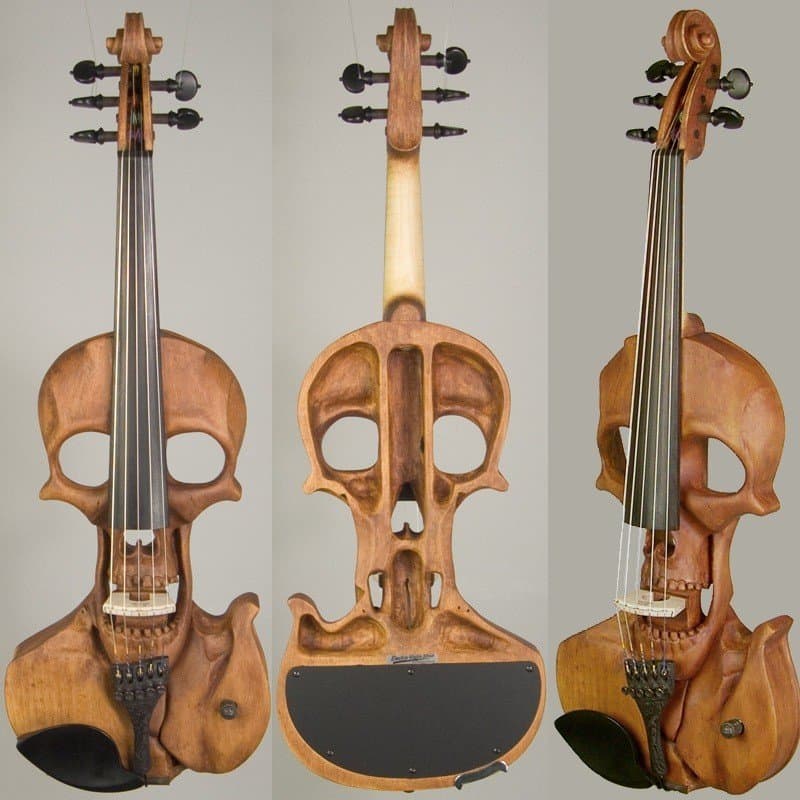 This violin is carved out of wood and made to look like a human skull. If you want to own this musical instrument it will cost you almost 3,000 dollars. 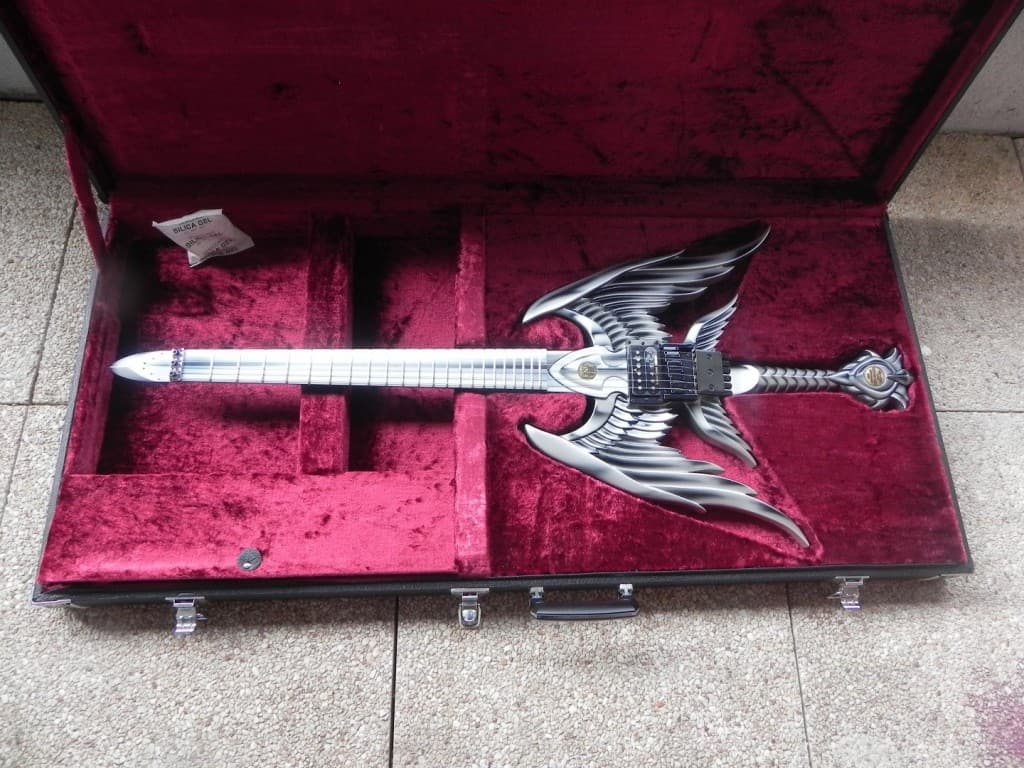 As crazy as it sounds someone actually made a guitar that looks like a sword. No word on how sharp it is though!

This item was reportedly custom made for a member of Alfee — a Japanese rock band. 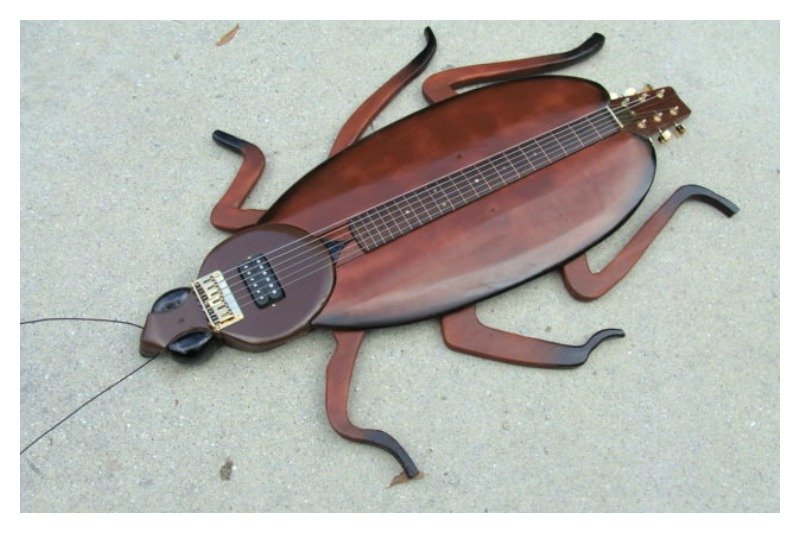 This creepy crawly is not a gigantic roach, it’s just a guitar made to look like a gigantic roach. This lap-steel, slide guitar has a 25 inch scale length and the body, legs and wings are yellow pine. 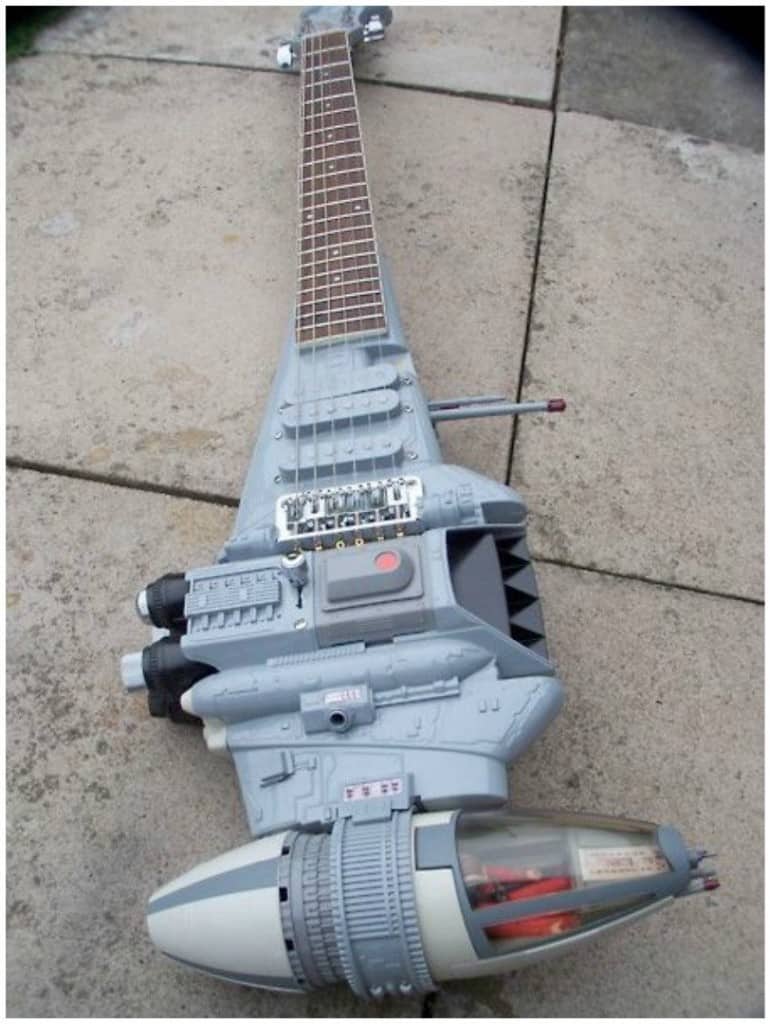 Of course someone made a Star Wars guitar, are you actually surprised?

64 year old music fan Tom Bingham is the creator of this Star Wars-themed guitar and this is not the only one — he has an entire collection. Tom reportedly uses bits of scrap bought from car boot sales to create these fascinating instruments! 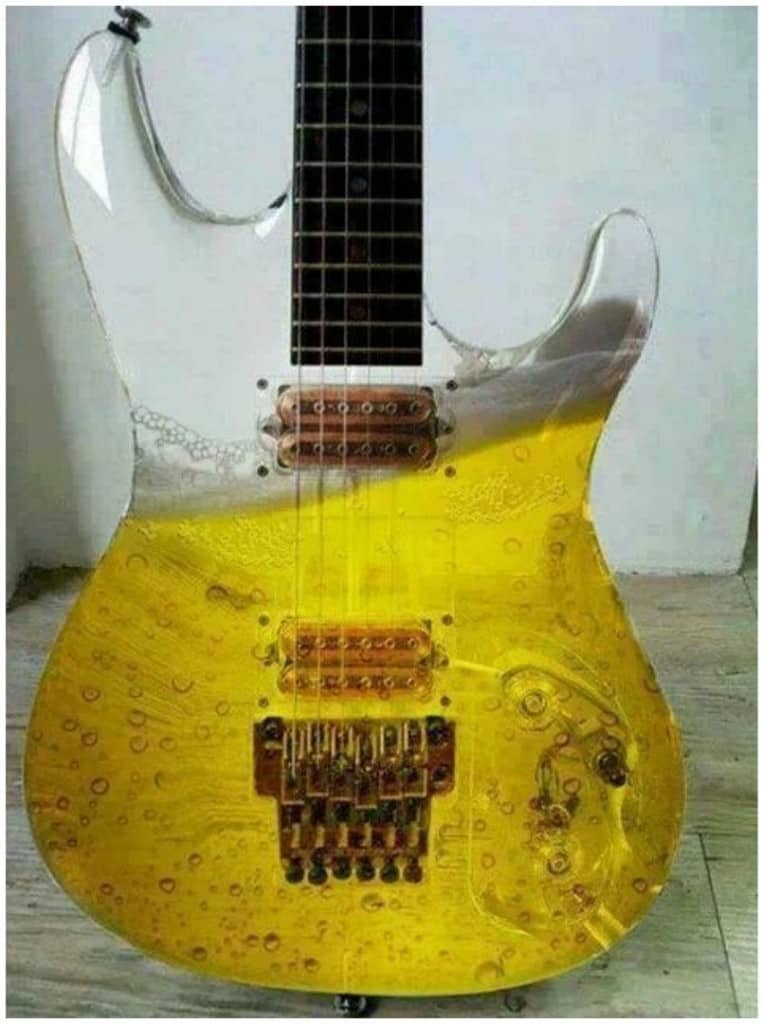 Yes, that yellow looking liquid floating inside this guitar is actually beer. (Now that’s a sentence I never though I’d say!)

Hey, we all know musicians like to rock out and get drunk, so this actually makes sense. 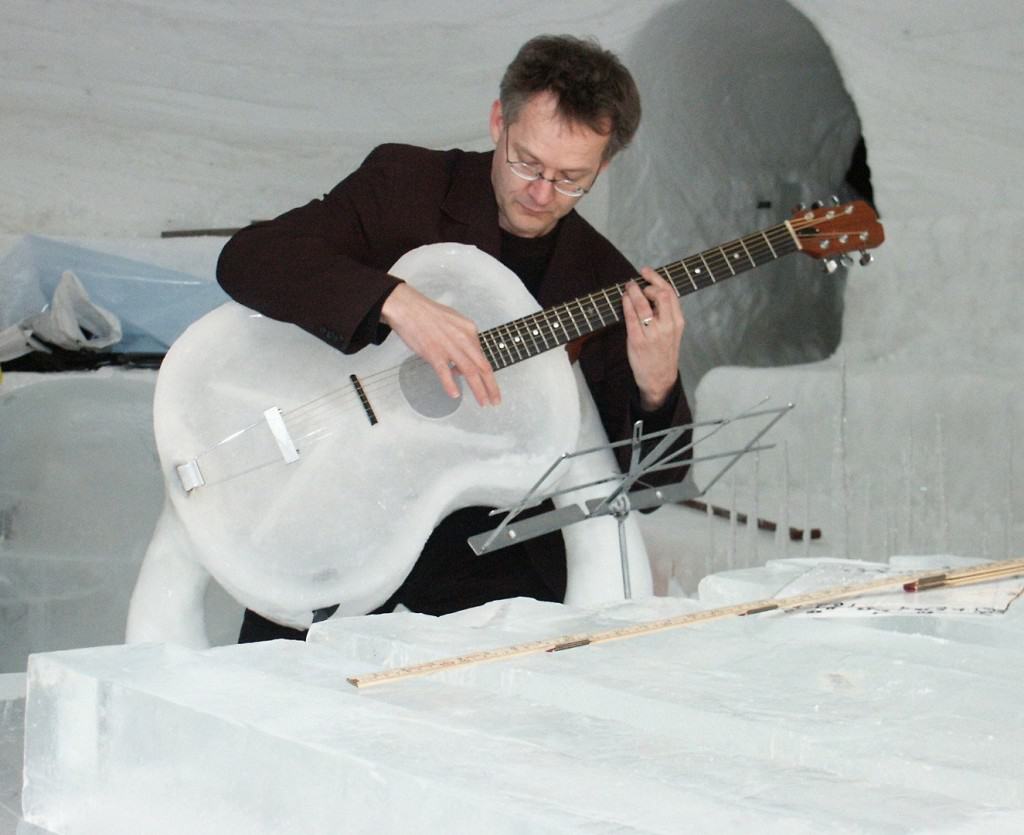 The ice guitar was designed and created several years ago by Professor Jan-Olof Eriksson. I’m guessing this one is kept in a very, very cold room. 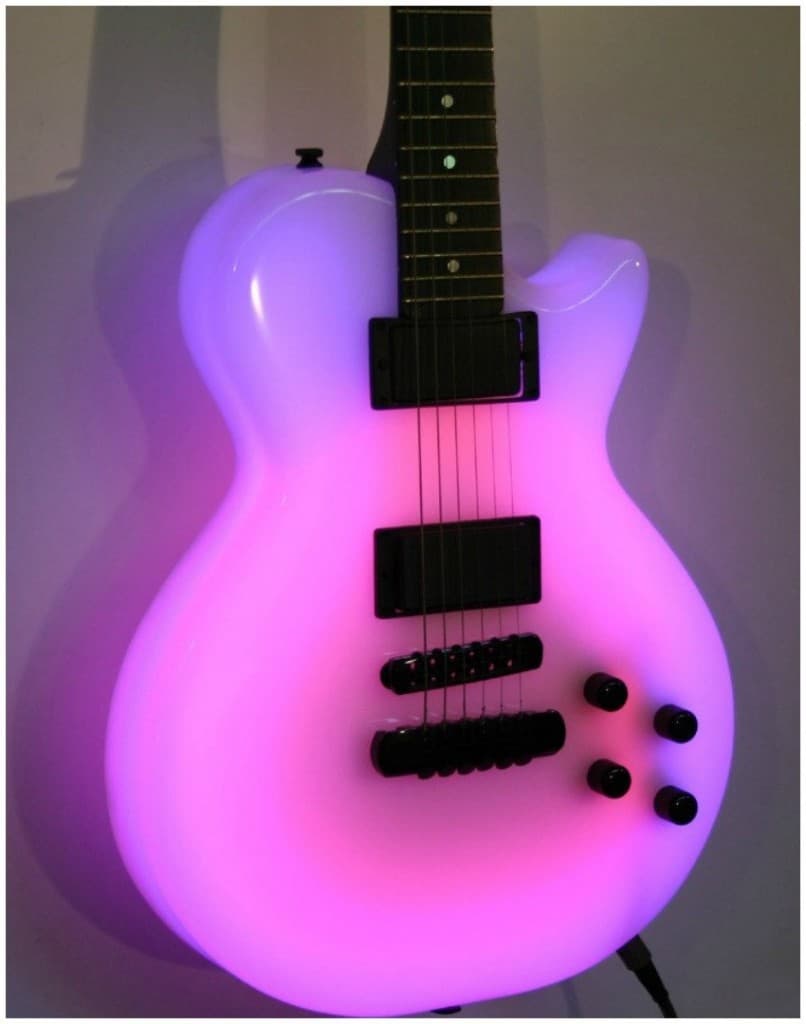 I’m guessing that Taylor Swift would definitely like to rock out on this colorful neon pink guitar. Or maybe she already owns one! 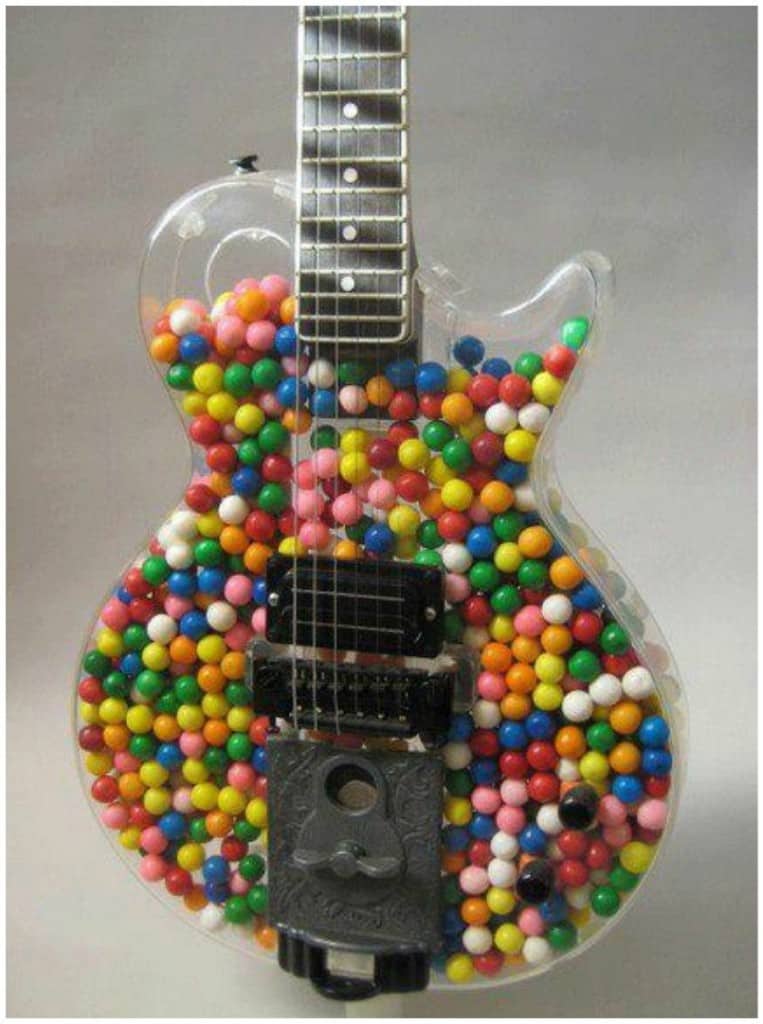 No, this guitar is not made out of bubble gum per-say, it is just filled with colorful, delicious bubble gums much like the ones in a candy machine.

Hey, if you can put beer in a guitar then why not candy? 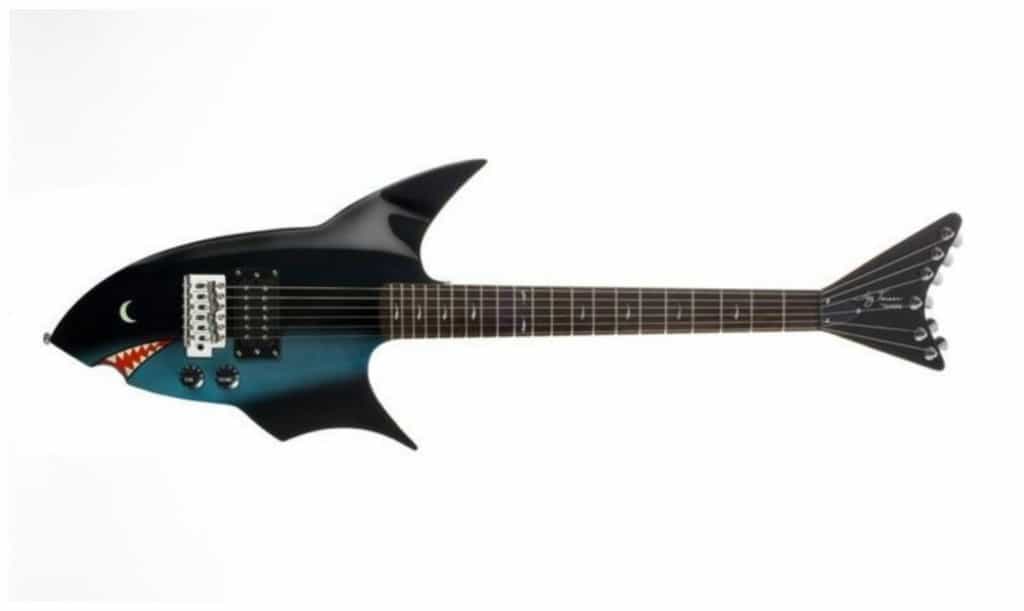 This looks eerily like the real thing, the only difference is that this shark guitar doesn’t need water, and it won’t bite your arm off!