Ever wondered what Snow White, Mulan, or Cinderella would look like in real life? Finnish artist and photographer Jirka Väätäinen certainly did. But instead of just idly wondering, he used his impeccable skills as an artist to render stunningly realistic drawings of all the Disney princesses and female characters. The results are these astonishing ultra-realistic portraits, depicting our favorite Disney heroines as we’ve never seen them before. Read on to check them out and learn some things you may not have known about these famous fictional ladies.

In 1992’s Aladdin, Princess Jasime is the spunky daughter of the Sultan who refuses to be given away in marriage. Jirka’s portrait accentuates her Middle Eastern heritage. It really puts Jasmine in “a whole new world”.

Snow White and the Seven Dwarfs was based on the German fairy tale of the same name. The eponymous character of Snow White is cheerful, if somewhat naive. Her realistic portrait retains her snow-white skin and blushing red cheeks, but tones it all down to realistic levels.

2013’s Frozen was produced long after Disney abandoned traditional animation in favor of computer generated imagery. As such, Anna has quite a bit of detail on her face, but her proportions and facial structure remain cartoonish. Jirka’s ultra-realistic drawing corrects this, giving us a glimpse of what the Princess of Arendelle would actually look like.

Another princess from Frozen, Elsa posses the cryokinetic power to control ice. Like many Disney characters, she was partially based on a classic literary character — the titular character from Hans Christian Andersen’s The Snow Queen.

The idyllic fairy tale setting of Beauty and the Beast was partially inspired by France. For his take on the character Belle, Jirka emphasized her French characteristics. Looking at her portrait, you can understand why Gaston was so into her.

Lewis Carroll, the writer of the original Alice in Wonderland (officially known as Alice’s Adventures in Wonderland), often entertained children with fantastical stories. One of those children, Alice Liddell, inspired the eponymous character from Alice in Wonderland. She looked a bit different from the Disney and Jirka versions, but her trustful, courteous, and wildly curious nature shines through.

1999’s Tarzan was the last film of the so-called “Disney Renaissance”, a period from 1989 to 1999 when Disney studios released blockbuster after blockbuster with very few missteps.

Tarzan was no exception. A driving factor in the film’s success was the character of Jane Porter, played by veteran actress Minnie Driver. Many of her mannerisms and characteristics were incorporated into Jane’s animation, and the character’s appearance was partially inspired by Driver.

Speaking of the Disney Renaissance, The Little Mermaid was the movie that kicked it off. For his portrait, Jirka rendered Ariel’s long, flowing, bright red hair, blue eyes, and mermaid tail with stunning realism and detail.

The characters in Hercules were a departure from the “traditional” Disney style of animation. Take Megara, for example. She has thick hair, a very slender waist, lengthy eyebrows, and a more angular stature than other Disney princesses.

Jirka’s rendition of Rapunzel from Tangled looks quite a bit like Amanda Seyfried’s character from Mean Girls.

Mulan was the first Disney film set in China, and was based on a Chinese poem that describes a woman-warrior named Hua Mulan, who took her father’s place in battle and proved to be as valiant and capable a warrior as any man.

The real-life tale of Pocahontas is quite a bit more complex than the story portrayed in the Disney movie. For starters, she probably didn’t look like she was ready to hit the runway in a Paris fashion show.

Disney/Pixar’s Brave is about a young woman who wants to take control of her fate. She’s definitely a free spirit who — just like her hair — cannot be tamed. 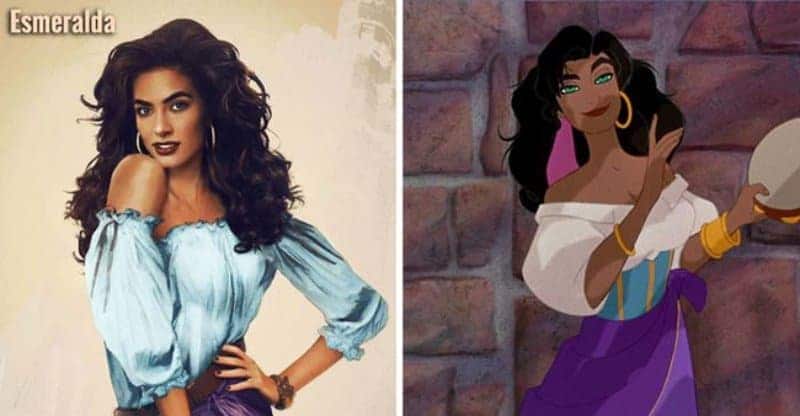 Unlike the Disney film, the original Hunchback of Notre Dame had a rather dark ending. Esmeralda is hanged by the king’s men, and Quasimodo dies of starvation at her grave.

Tiana was the first African-American Disney princess. She embodies American ideals like hard work, gumption, and determination — as well as the Disney ideal of marrying a prince.

Many people picture the Tinkerbell from Disney’s 1953 film Peter Pan. But in the original stage play, she was portrayed as a darting light “created by a small mirror held in the hand off-stage and reflecting a little circle of light from a powerful lamp.“

Cinderella is known for her cheery disposition and positive attitude. Jirka’s portrait catches her looking a little more pensive.

Technically, she doesn’t fall under the “Disney Princess” category but Jirka’s portrait of Ursula is absolutely fabulous.

Wendy Darling is the quintessential English child. She mothered the Lost Boys in Neverland and even the nefarious Captain Hook wasn’t immune to her charms.

Disney’s sleeping beauty is based on the German fairy tale of the same name. Jerka’s rendition of Princess Aurora captures this influence perfectly.