17 Disney Moments That Will Ruin Your Childhood

Most people in the west grew up watching Disney movies and relating to beloved Disney characters. Disney is the epitome of childhood, and going to Disneyland is every child’s dream. In reality, Disney isn’t all about rainbows and pixie dust. There are loads of R-rated easter eggs found within their movies — references to sex, smoking, alcohol, drugs, homosexuality and even bestiality can be found all over Disney movies!

If you haven’t noticed any of these, it’s probably because you were too young and naive to get the joke. Disney movies are still made and animated by adults anyway, and we can’t help slip on a little bit of fun. We have compiled a list of 17 Disney moments with R-rated references — how many were you able to notice before? 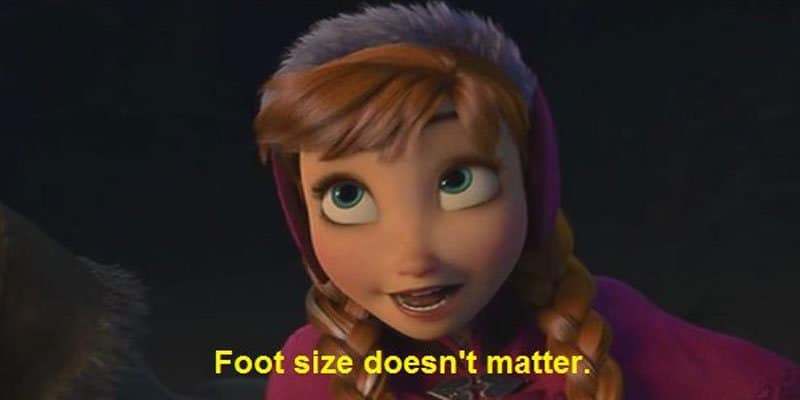 The first on the list is one of the latest blockbuster successes of Disney, ‘Frozen’. Anna, Elsa and Olaf have become instant animated stars overnight and the LSS-inducing ‘Let it Go’ has everyone (kids and adults alike) singing it non-stop for months.

Did you know Frozen has sexual innuendos hidden in the film, too? On one scene, Kristoff and Anna were arguing on how much he really knows Hans.

Aladdin Wants You To Take Off Your Clothes 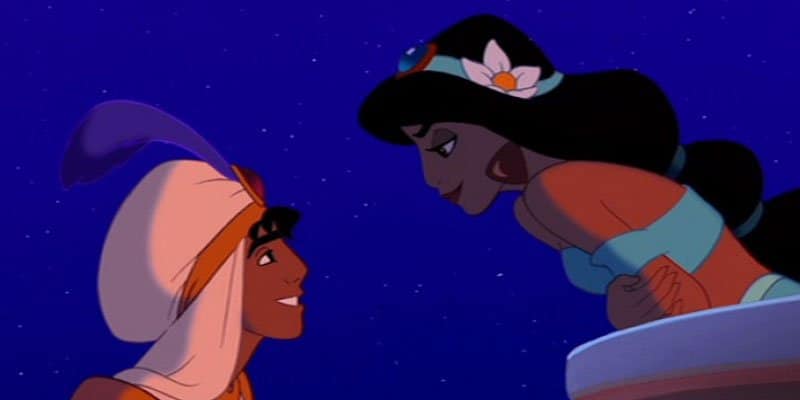 Aladdin is full of sexual references and green jokes that we probably didn’t get when we were younger.

One scene is when Aladdin (who is now Prince Abu) is on the balcony trying to get Rajah off him. As Jasmine enters the frame, a voice is heard saying ‘good teenagers, take off your clothes’.

Didn’t hear it? Put the volume on full blast and you’ll definitely hear it. Disney claims that the actual voice says, ‘good kitty, take off & go’, but many insist that wasn’t what they heard!

Wendy Gets Assaulted By Mermaids 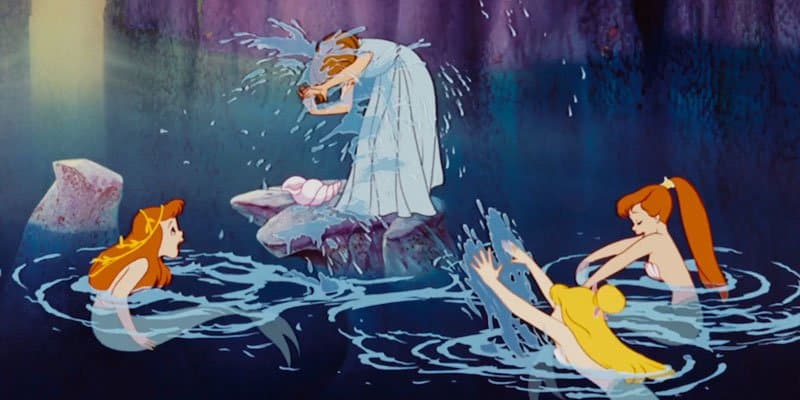 Peter Pan takes Wendy to a mermaid lagoon to meet his mermaid friends. Unfortunately for poor Wendy, being the new girl on the block, means getting the ire of the mean girls in mermaid lagoon. She gets splashed, pulled and assaulted by the mermaids who are obviously attempting to drown her.

To make matters worse, Peter Pan’s reaction to the sight is boisterous laughter and insists that they were only having some fun. 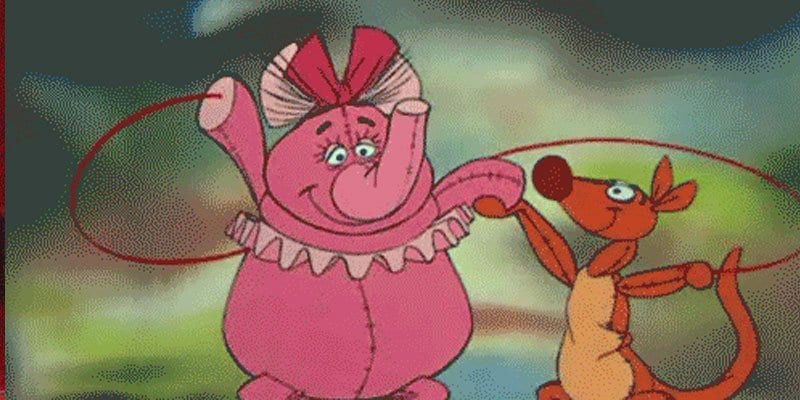 Am I the only one who was freaked out by the heffalumps and woozles in Winnie the Pooh? These odd creatures gives a trippy feeling of LSD. 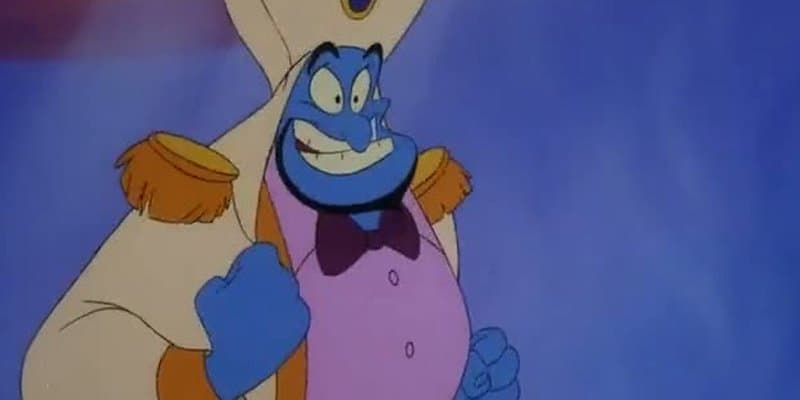 When a stampede erupted during the big wedding in the third Aladdin installment, ‘Aladdin: King of Thieves‘, a mini-earthquake happened to which Genie commented ‘I thought the Earth won’t supposed to move ’til the honeymoon!‘ We got that joke, Genie. 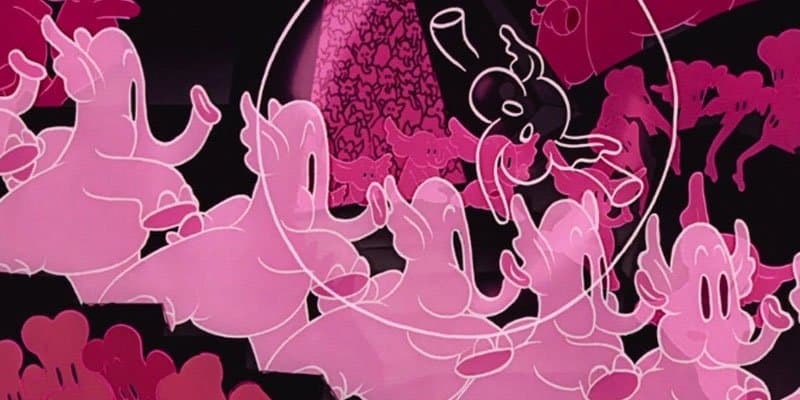 This is another LSD or psychedelic drug reference, although in the movie, Dumbo supposedly got drunk. We sure hope we won’t drink whatever he drank or else we would be having parading pink elephant nightmares.

The Minister’s Boner In The Little Mermaid 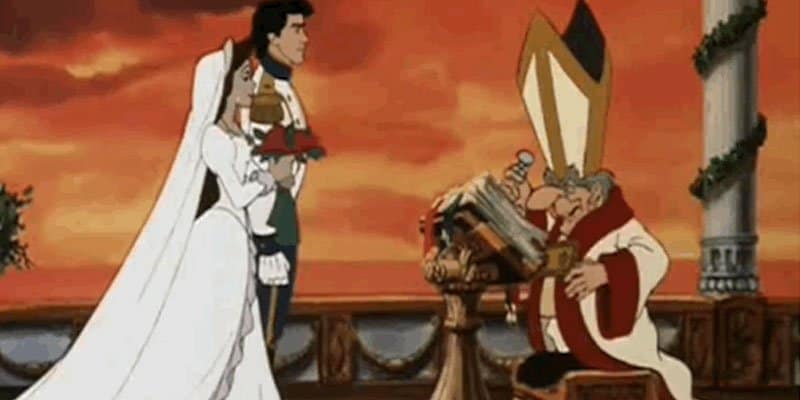 During the wedding scene of Prince Eric and Vanessa (Ursula in human disguise), the wedding minister seems to be having an erection. Some Christians were appalled by the scene that they attempted to ban the Disney movie. 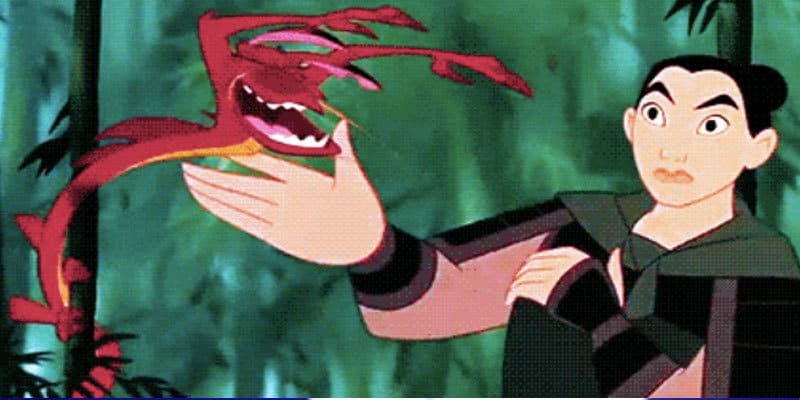 Mushu tells Mulan that he has powers beyond her imagination. To illustrate an example, he states that he could see straight through her armor.

This was not received well by the female heroine and slapped him straight in the face. Peeking at a woman’s chest is never nice.

The Penile Castle In The Little Mermaid VHS Cover 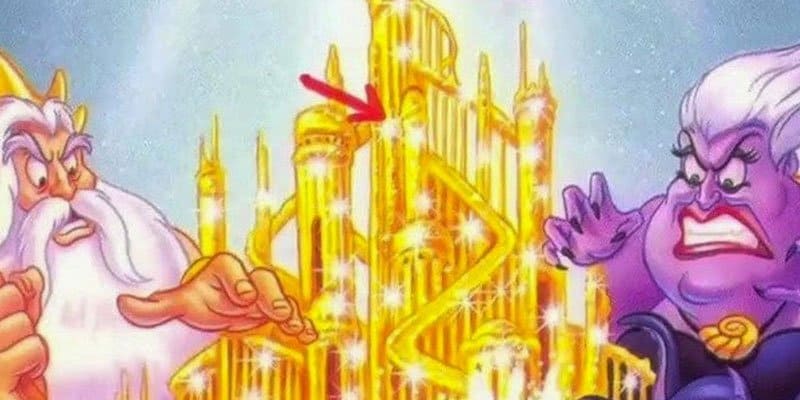 Another hidden sex reference is found in the VHS video of The Little Mermaid. Right at the very center of the castle you will see a drawing of a pen*s!

Disney officials claimed someone else outside the animation team did the drawing of the male genitalia, but they subsequently changed the VHS cover on their future productions. 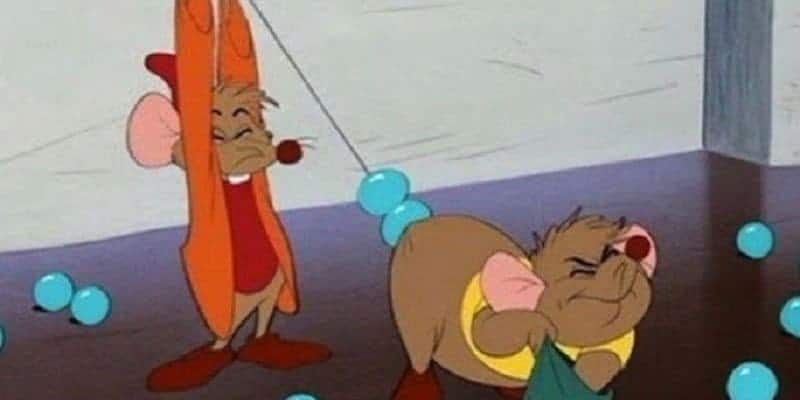 In Disney’s Cinderella, the two lovable mice are seen stealing beads from the stepsisters. One of the mice started placing beads into his other mice friend. It may mean nothing at a glance, but putting things into someone’s behind definitely looks wrong to us. 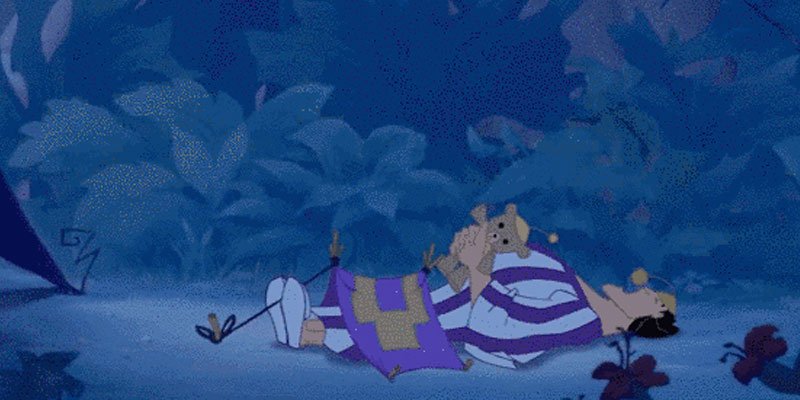 In Emperor’s New Groove, Kronk is seen covering only the most important body part — his crotch area. 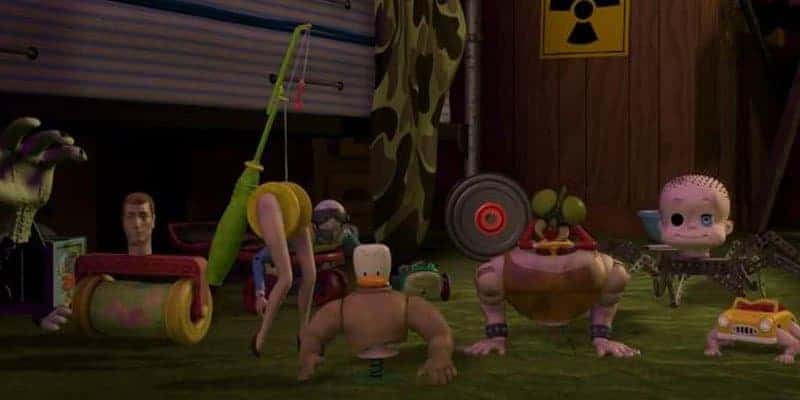 In the first movie, Sid’s collection of mutant toys shows a pair of doll legs attached to a fishing rod. In reference, a ‘hooker’. Did you get it the first time? 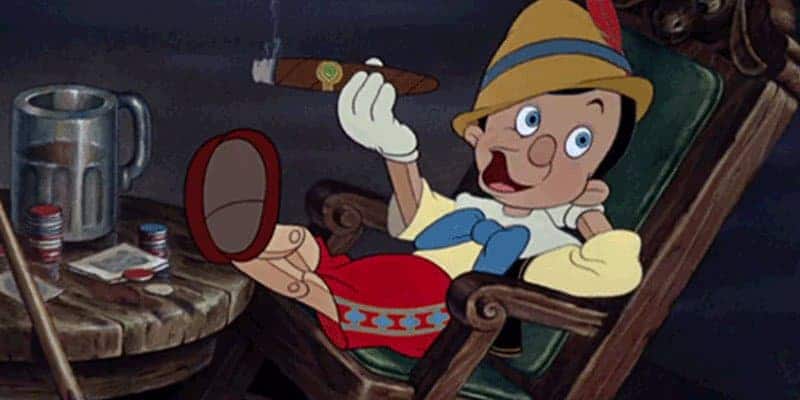 Pinocchio is seen smoking a cigar and drinking a beer–giving children a wrong impression that it’s okay to do these vices as a young child! 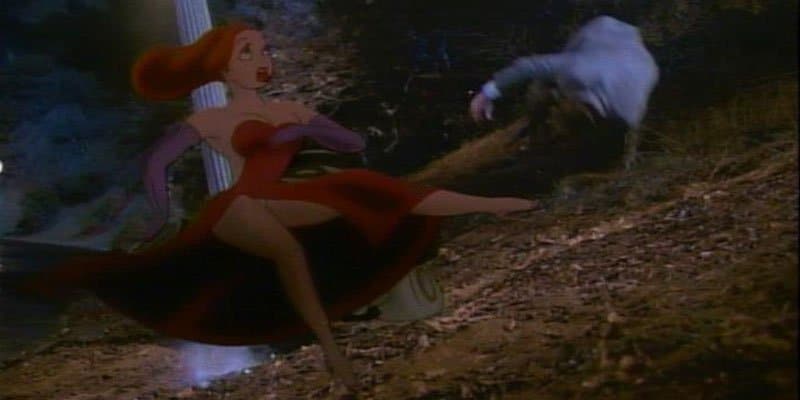 A lot of boys grew up having a huge crush on Jessica Rabbit. Here’s when it gets better: during the car crash scene, Jessica is revealed not wearing anything under her dress.

Perhaps she didn’t see the need for undies because she’s married to a rabbit. You know the reputation about rabbits and reproducing. 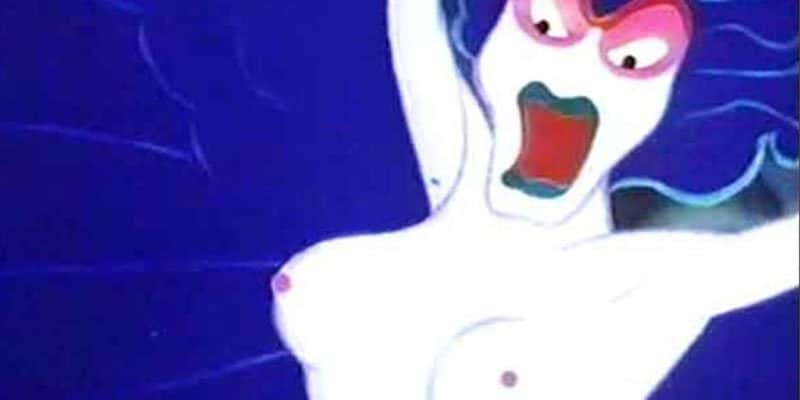 The harpies in the Fantasia movie are shown bare-chested, flashing their breasts for every children to see. 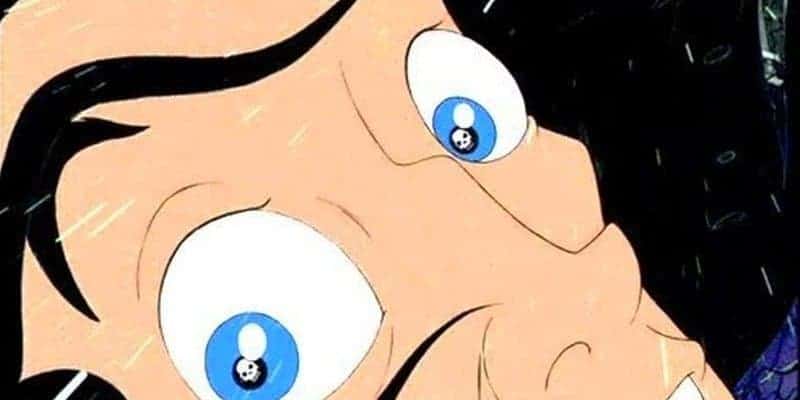 It’s an added scare effect to see little skulls in Gaston’s eyes during his death scene. 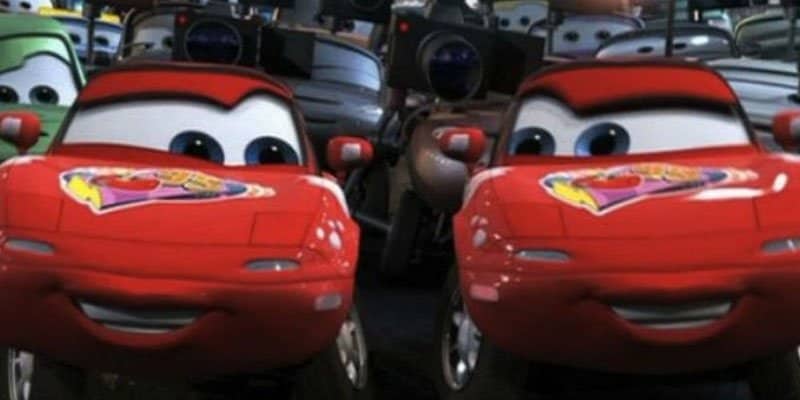 On one scene when Lightning McQueen was on stage, some groupies went up to the superstar.

They introduced themselves: ‘I’m Mia, I’m Tia. We’re your biggest fans! Ka-chow!‘ They then raised their headlights on him. They were actually ‘flashing’ their goods at Lightning!