15 Of The Craziest Restaurants On The Planet

Many of us can testify to having at least one unique dining experience. Maybe you had dinner under the Eiffel tower in Paris, a fancy meal in a hot air balloon, or dined in the most expensive restaurant in the world. Now don’t get us wrong, they all sound quite amazing, romantic and even unique — these experiences might seem a little but crazy to some, they seem quite normal when compared to others. Here are 15 of the craziest restaurants on the planet! 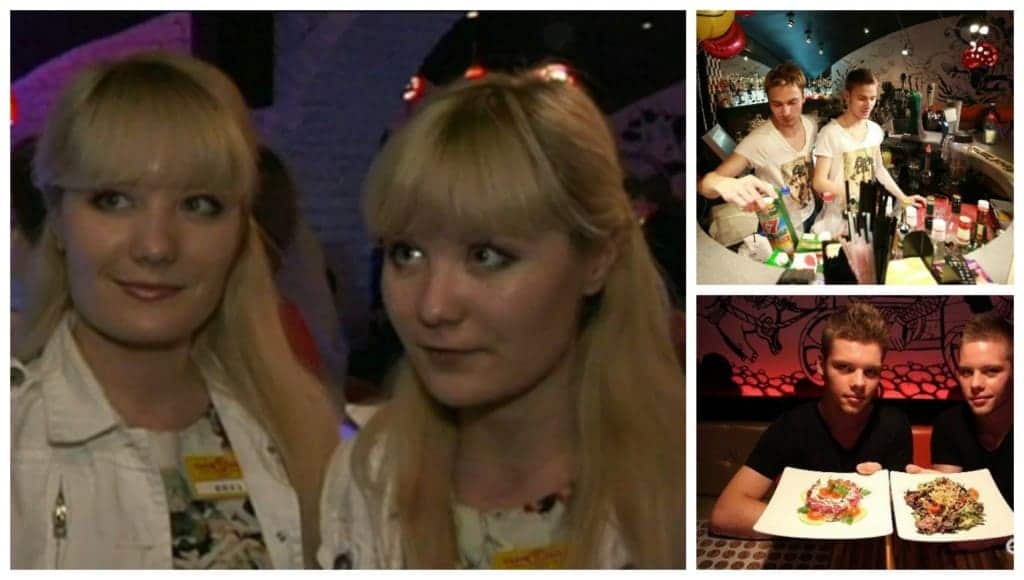 You don’t have to be a twin to dine in this eatery, you just can’t work there – unless, of course, you are a twin.

Located in Moscow, this 24-hour restaurant only hires identical twins – waitresses, bartenders even the chefs will have you seeing double. Seems like a fun place to dine, until its time to tip right?

The concept for this diner is reportedly inspired by a Soviet film from 1964 in which a girl visits an alternate reality and confronts her twin. 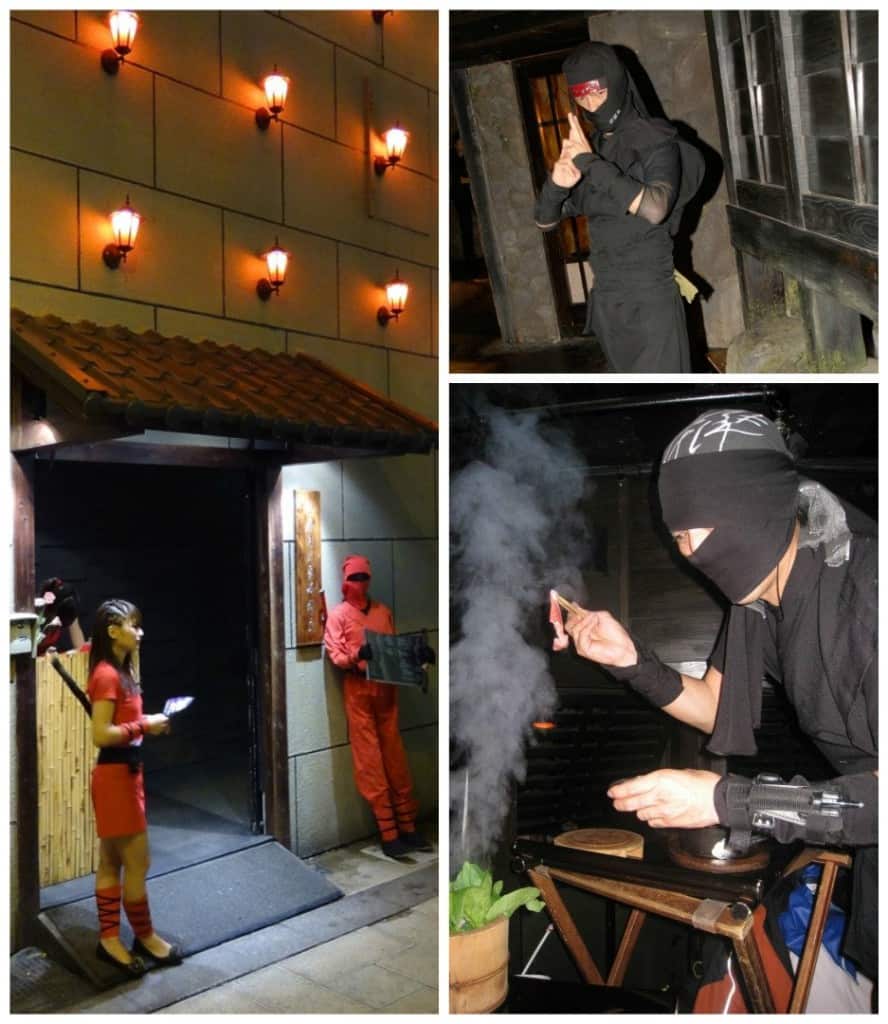 Living up to it’s unique name, the Ninja restaurant in New York is designed to resemble a 15th-century Japanese dungeon filled with Ninjas.

The staff, well clad in their Ninja attire, perform martial arts inspired stunts and tricks as you dine on tasty dishes. 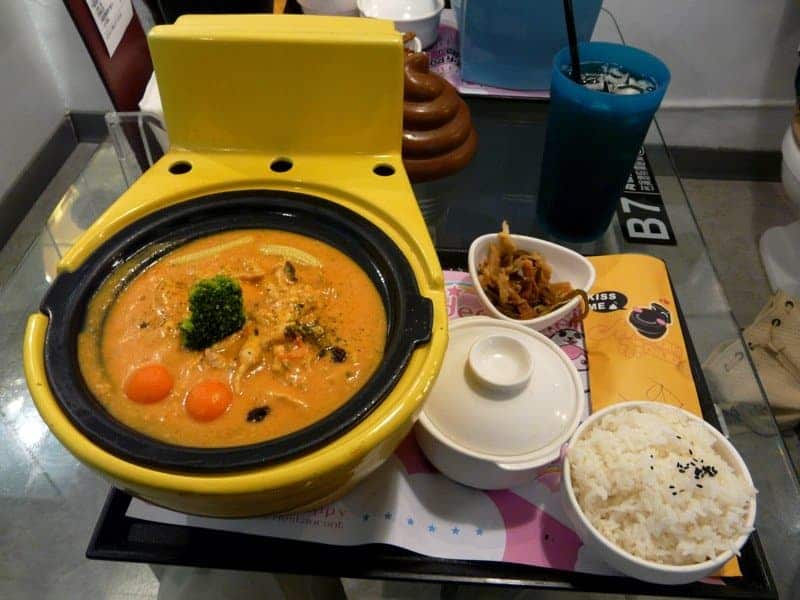 Taking the toilet theme to a whole new level, this restaurant in Taiwan doesn’t just serve your food in miniature toilets but you are also seated on; you guessed it: A toilet seat!

Initially the restaurant only served chocolate ice cream, but it has since added a variety of options to the menu, and now has a chain of locations across Asia. 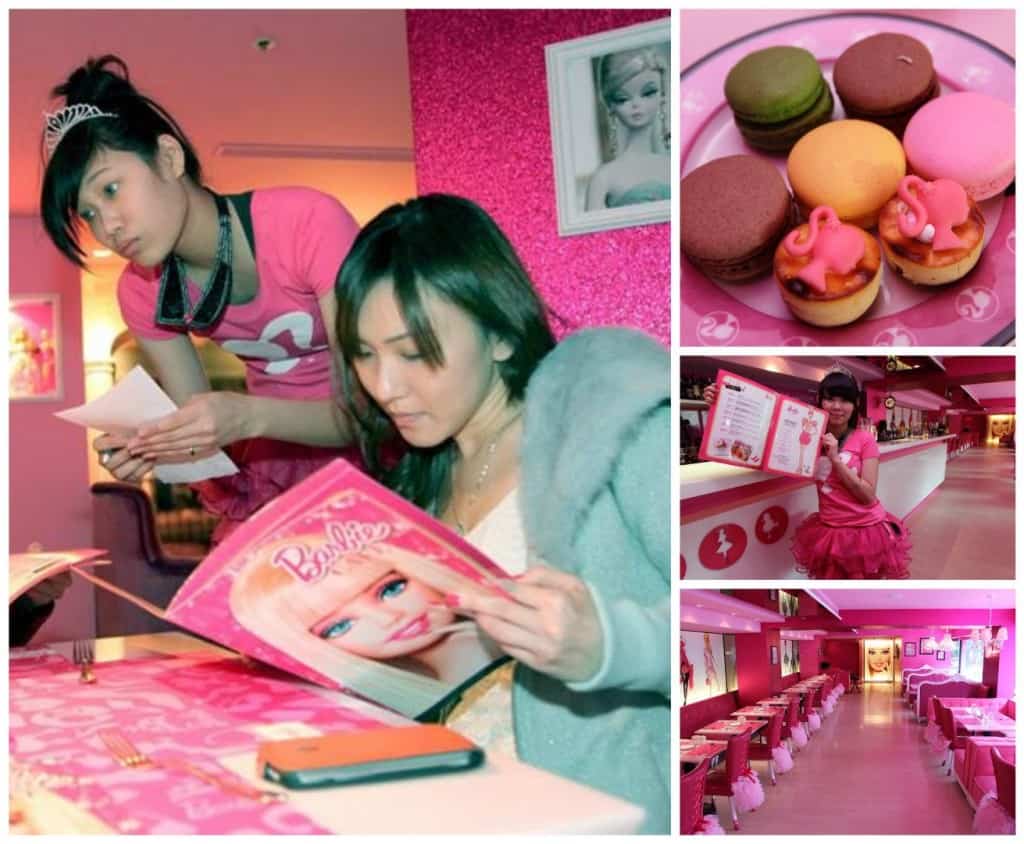 Apparently there are grown-ups, who are still obsessed with Barbie — at least judging by the popularity of this Barbie restaurant in Taiwan.

The decor? pink, of course, with Barbie images and dolls in every nook and cranny. The staff are outfitted in pink tops, tutus and tiaras. 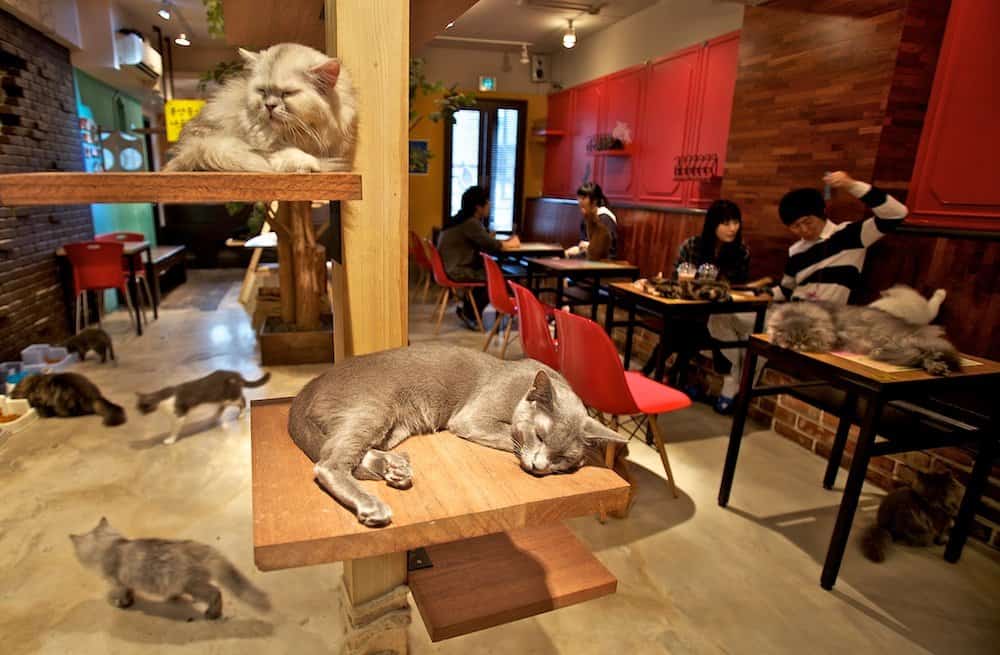 Talk about cat lovers paradise. This cat cafe is located in Tokyo, and allows you to enjoy your meal while being surrounded by a variety of different cats.

If you visit the cafe in the evening, you’ll get the chance to witness the dinnertime ritual where the cats feast on food in glass bowls arranged in a circle around a floor lamp. 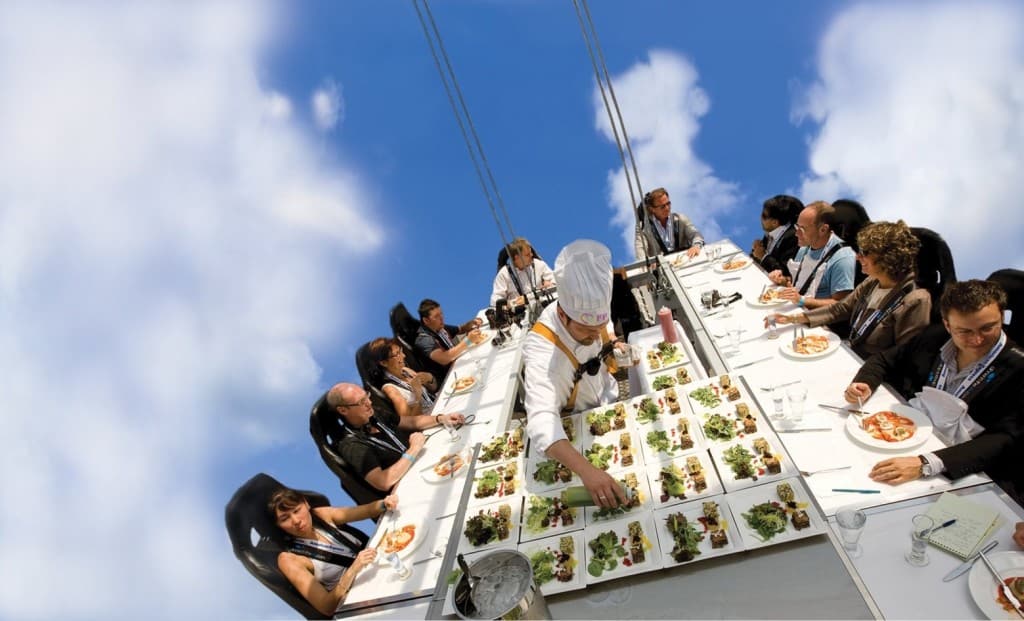 The sky restaurant originated in Belgium, but has since gained popularity, and is now offered in cities around the world including Canada.

The concept of this restaurant involves guests being securely strapped in dining chairs and being hoisted 160 feet in the air by a crane. They are then treated to a delicious meal in the sky. 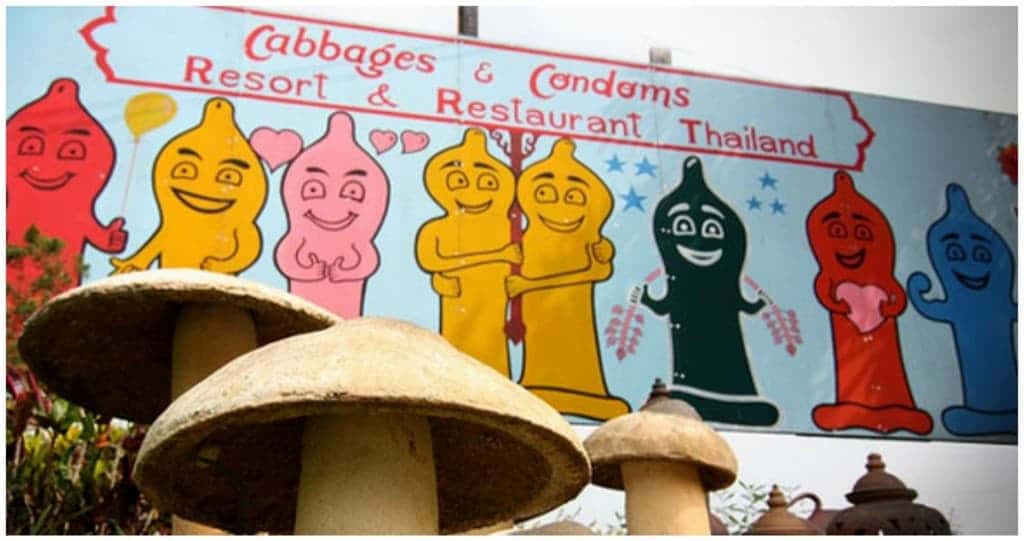 As if the name wasn’t crazy enough, the aim of this restaurant is to promote sexual health with dinner. The first one started in Bangkok and has since branched out to the UK in an effort to spread the word about family planning and public health.

Throughout the restaurant, there are life-sized mannequins dressed up in themed outfits made from condoms. When your bill arrives, it is accompanied by either condoms, or a pamphlet about sexual health. 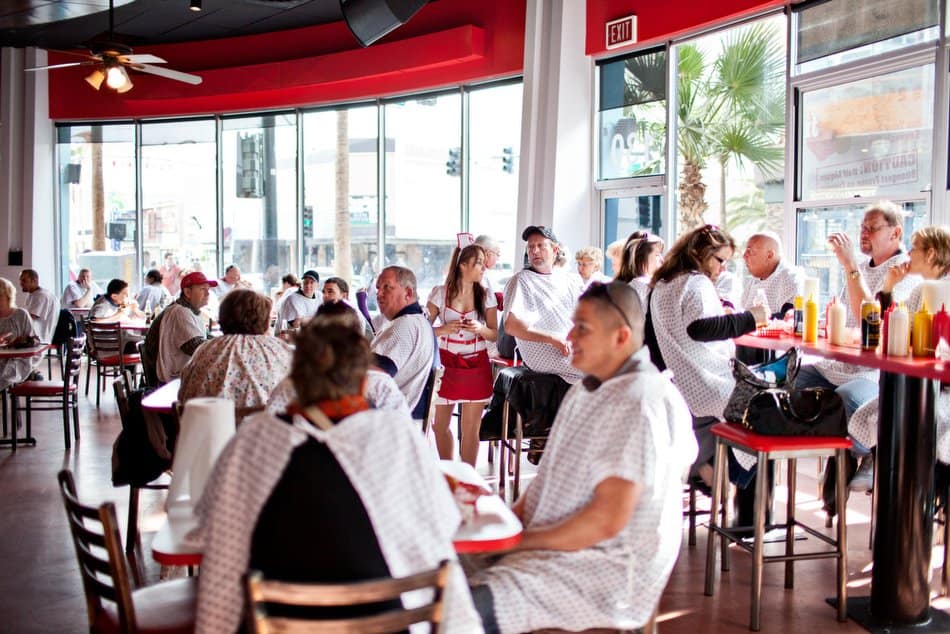 Designed to give you a heart attack thanks to the large helping of obscenely humongous burgers with sides of fries deep-fried in lard, the Heart Attack Grill in Las Vegas ensures that you are prepared for what is to come.

Diners are given hospital style gowns before they being to chow down on massive servings of food, served by waitresses dressed as nurses. Hey, transparency is everything — don’t say they didn’t warn you!

In Taiwan, Colorado, Sweden, Czech Republic, New Zealand and England you will find one of these unique Jet restaurants. Although they might have different names, the idea is to take old planes and convert them into restaurants.

If you’re a frequent-flyer, you should try out of these, it will definitely be the best food you ever eat on a plane. 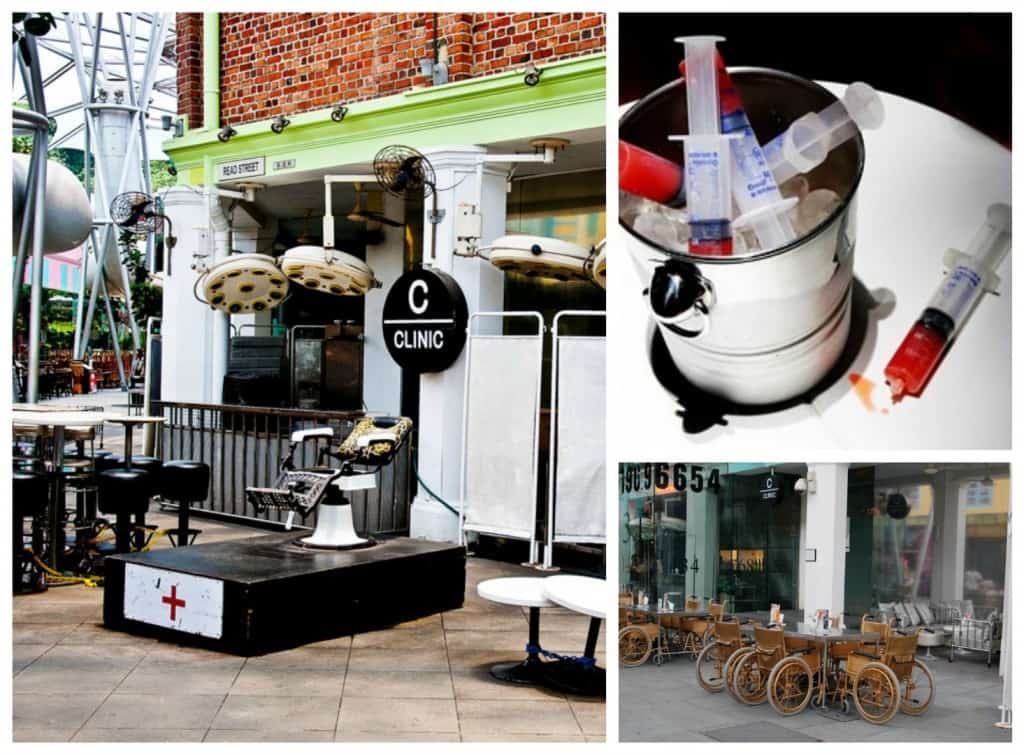 The name says it all — The Clinic is a restaurant based in Singapore that actually simulates a hospital.

The chefs ‘operate’ in an open demo kitchen under the glow of operating room lights, while meals are served on stainless steel surgical tables. Their signature dish, Dashi soup, is served from a syringe while guests are seated in wheelchairs and other hospital furniture. 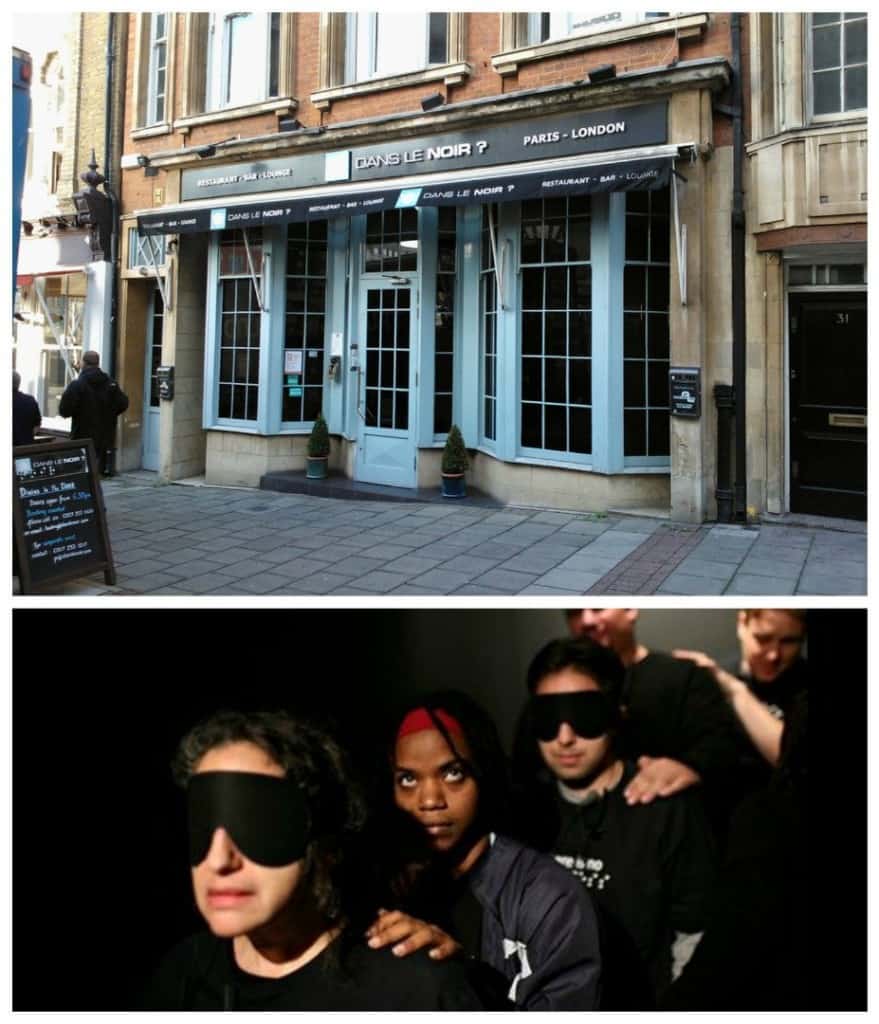 The restaurant, known as Dans Le Noir, in London offers the chance to dine blind – in complete darkness!

Diners are given a surprise menu which comes in four colors and themes: green means vegetarian; red means no seafood; blue means no meat and white is for normal.

After choosing, guests are guided to their tables by waiters equipped with night-view binoculars. Cellphones, flashlights and watches not allowed. Diners can only tell what they are eating by relying on their sense of smell and taste.

Other blind – dining venues can be found across the globe including locations at Paris, Moscow , Berlin and the US. 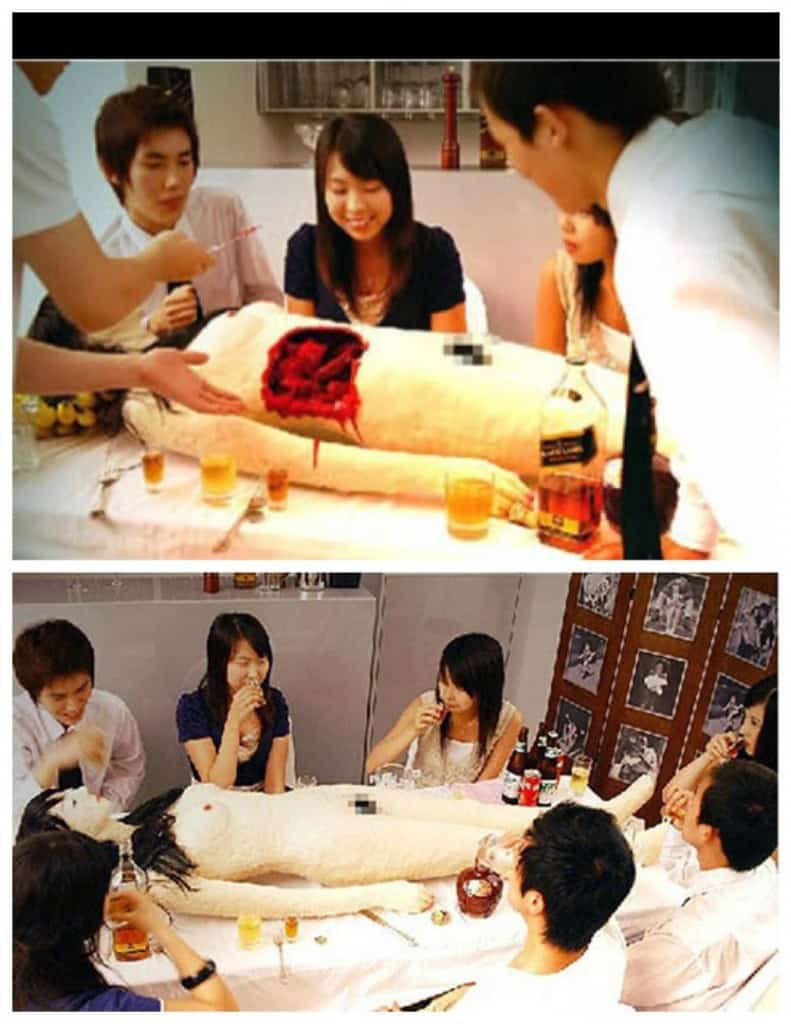 Don’t panic, you are not actually served human body parts in this Japanese restaurant. However, they do serve food which is made to look like a woman’s body.

The ‘body’ is stuffed with sushi and sashimi and when customers cut into the food, called Nyotaimori — which means ‘female body plate’ appears to bleed just like a human body would. 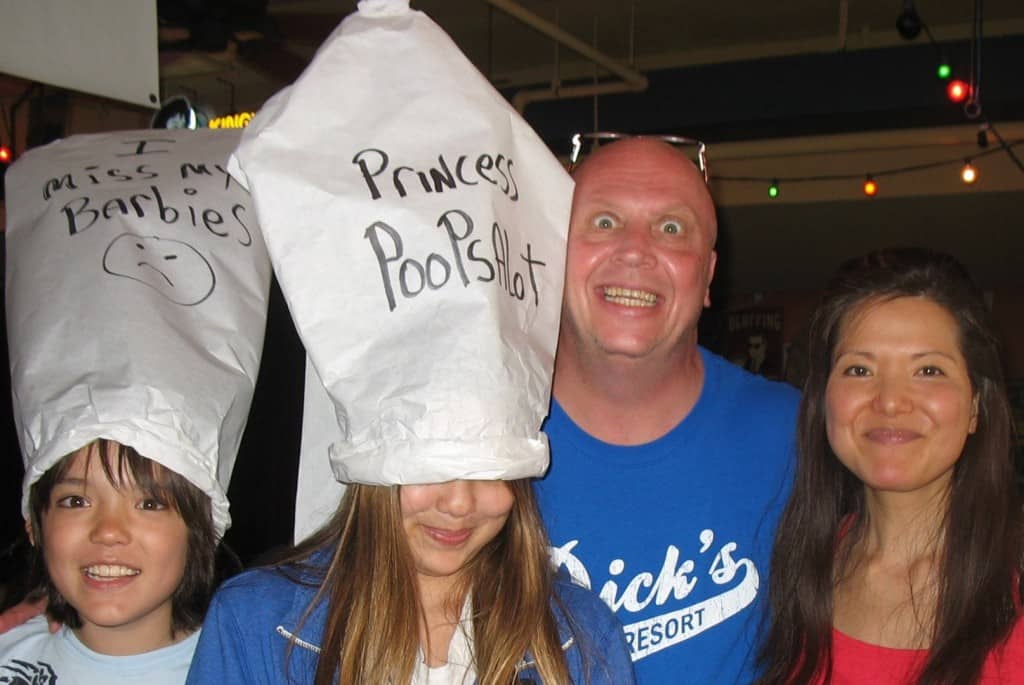 Are you someone who enjoys being insulted while dining on delicious food? Well you’re in luck because that is exactly what Dick’s Last Resort Restaurant offers.

Located in Boston, Chicago and Dallas, Dick’s customers are treated rudely, called names and ridiculed by restaurant staff. And if that’s not enough for you, don’t worry, your waitress will kindly write out these insults and put them on dunce caps which you have to wear while eating. 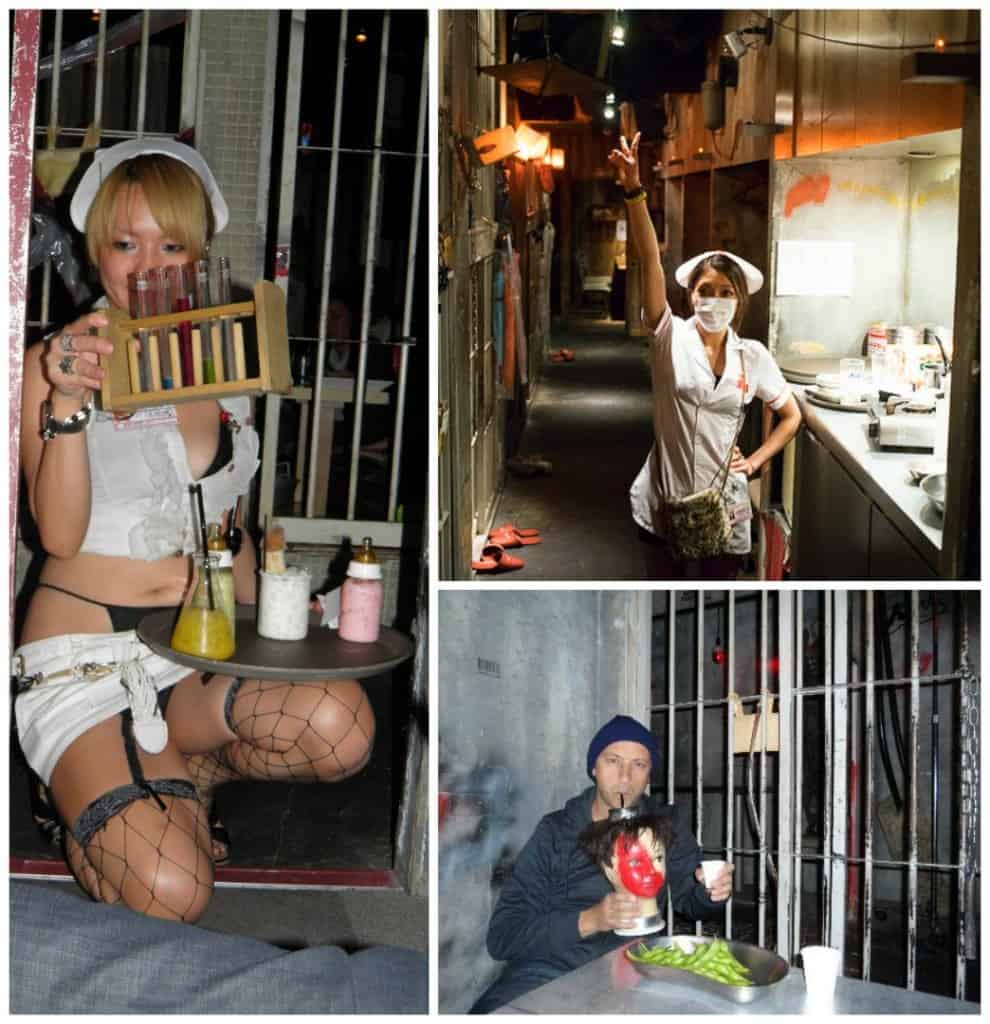 Be warned, this eatery is not for the squeamish; and not for the prudish either. Not only does this Tokyo restaurant look like a scene from a horror film which takes place in some sort of madhouse, but it is also PG rated.

While some customers are handcuffed to their tables and served liquid nourishment through IV bags, others are served by scantily clad waitresses dressed up as nurses, with their assets on full display! 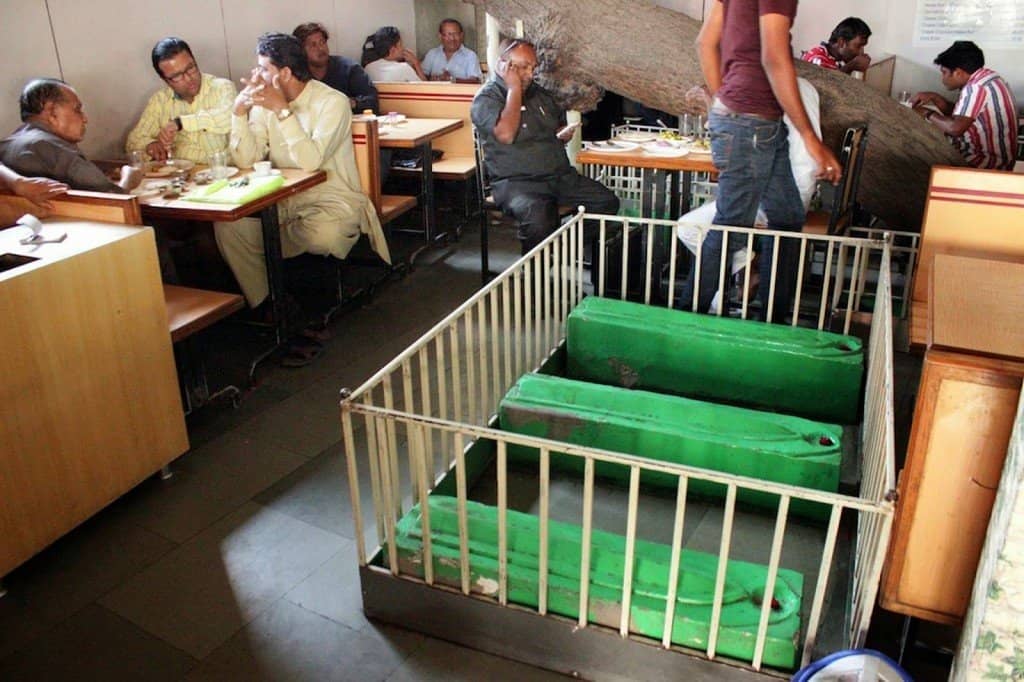 The food in this restaurant is to die for, no seriously. This very weird establishment located in India is actually built on a graveyard.

Not just that, but while you dine on bread rolls and milk tea, you can actually see the tombs in clear view throughout the restaurant. Now that’s something you don’t see everyday!