Marriage is an age-old institute that has played a major role in the perpetuation of our species. The act of marrying someone is sometimes given righteous levels of respect and various minorities have had to fight their way to receive the same rights in this area. People in this generation have begun to argue that marriage has been taken too seriously and that is compounded by the fact that half the weddings are now ending in divorce. This list comprises of marriages that are slightly less serious, the ones conducted between man and beast. Here are 10 instances of people getting married to animals. 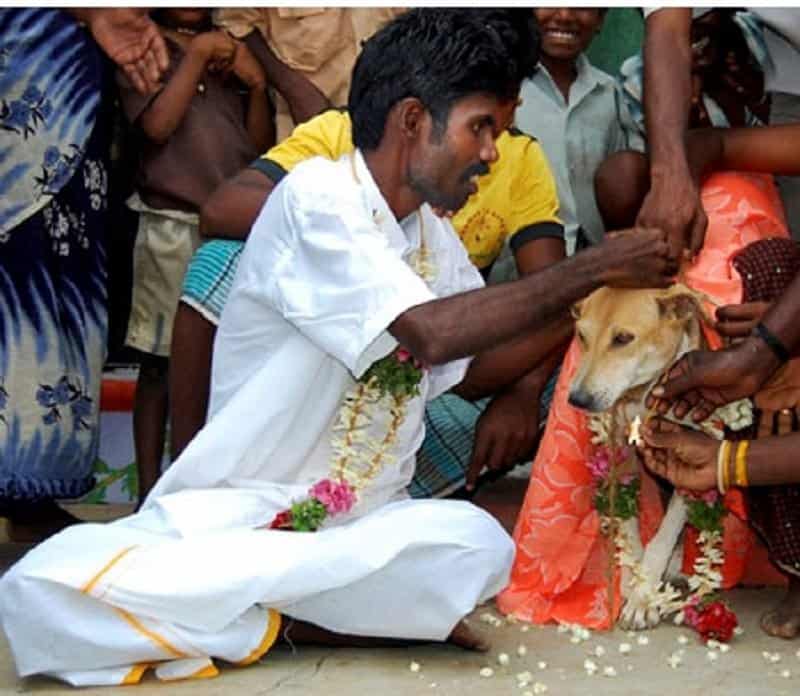 An Indian man by the name of Selva Kumar married a dog, not for the sake of love, but to break a curse. Apparently he killed two dogs when he was 18 and since that incident his body has been semi-paralyzed and he lost hearing in one ear. An astrologer suggested he marry a dog to break the curse and Selva promptly agreed to do so. 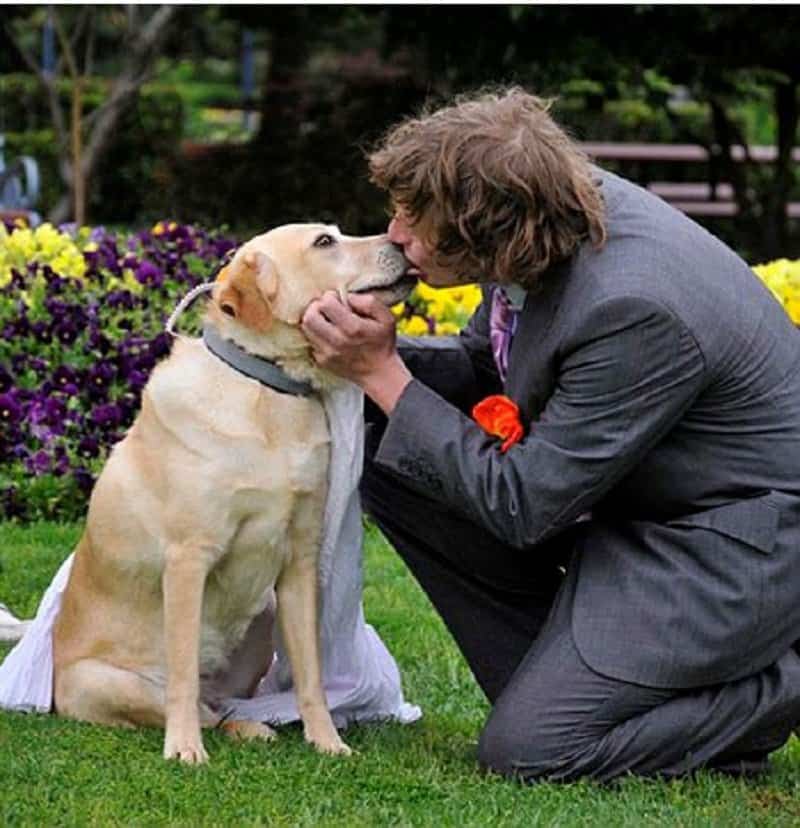 Joseph Guiso is a 20-year-old Australian man who married his pet Labrador. Over 30 people attended the wedding and Joseph claimed that he genuinely loves his dog and isn’t marrying her out of lust. He also said that he was a religious person and he did not think it was right to live with his pet out of wedlock. 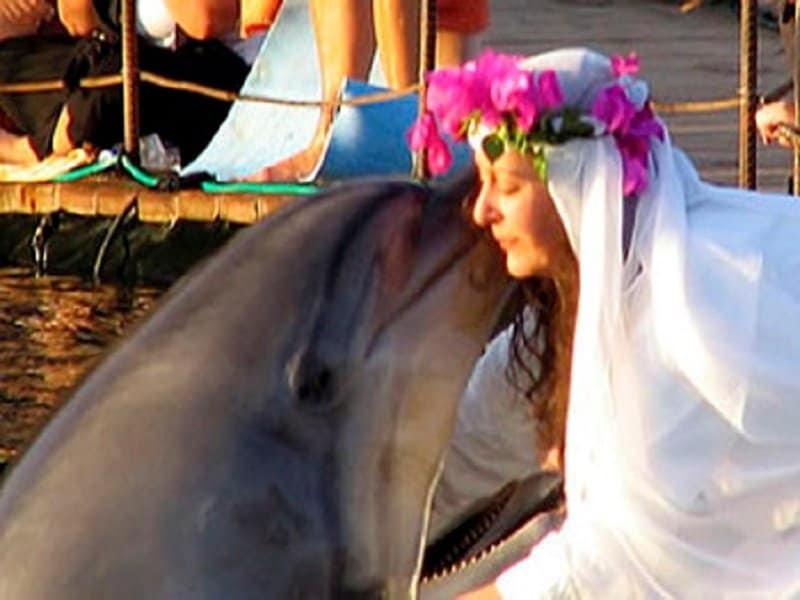 Most millionaires are considered to be eccentric people, but Sharon Tendler is probably a one-in-a-billion type of millionaire. In 2005, she actually married the love of her life Cindy who is a dolphin, in an Israeli resort. Sharon apparently met Cindy in 1990 when she first visited the resort and has been in love with Cindy since. 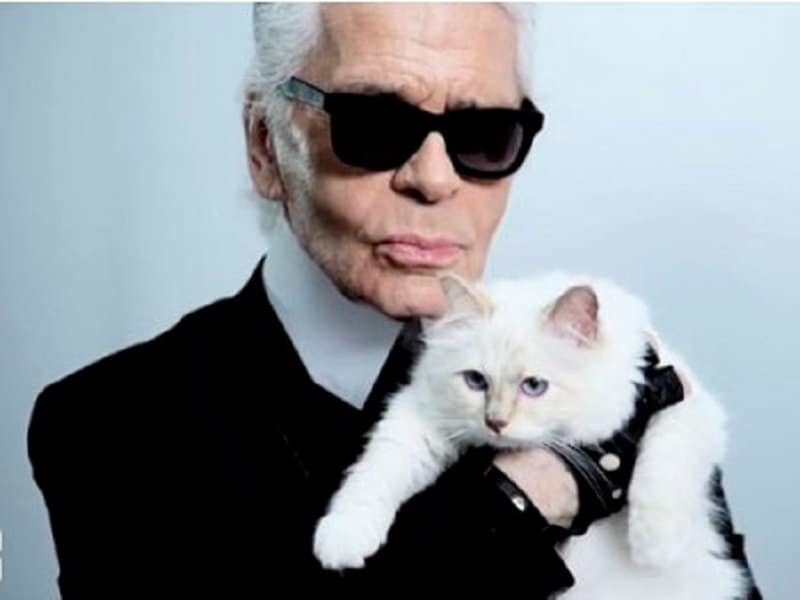 Karl Langerfeld, the renowned fashion designer for brands such as Chanel, announced in 2013 that he wants to marry his cat Choupette. Apparently Karl is madly in love with the furry feline and even created the cornflower-blue contour collection after being inspired by the cat’s eyes. The seventy seven year old fashion icon even makes his maid write down everything his cat does whenever he isn’t home.

Man Who Married A Goat 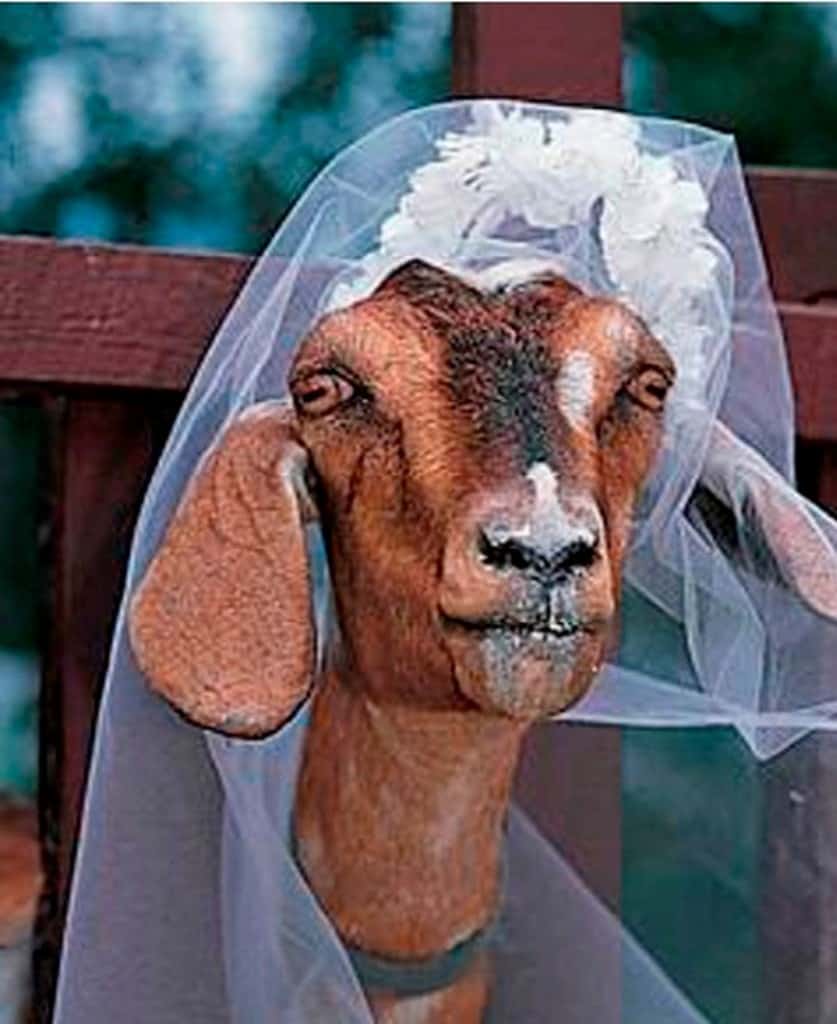 A Sudanese man was caught engaging in bestiality with a goat in 2006. He had to pay a fine of 15,000 Sudanese Dinars to the owner and marry the goat as a punishment. 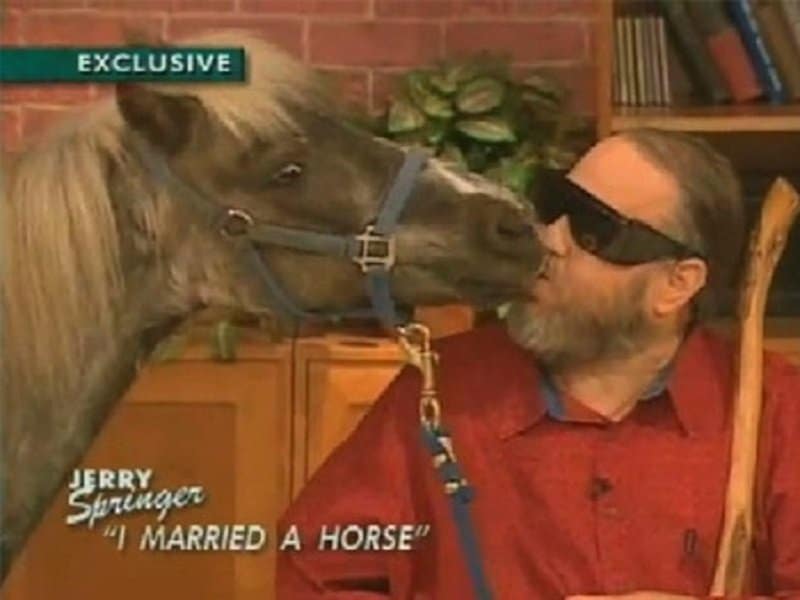 Mark Matthews was featured in an episode of Jerry Springer when the topic of the day was zoophilia. Mark apparently married his Pony, Pixel in 1992. Unfortunately, television was not ready to dissect something as complex as the love between man and beast, and the episode was never telecast. 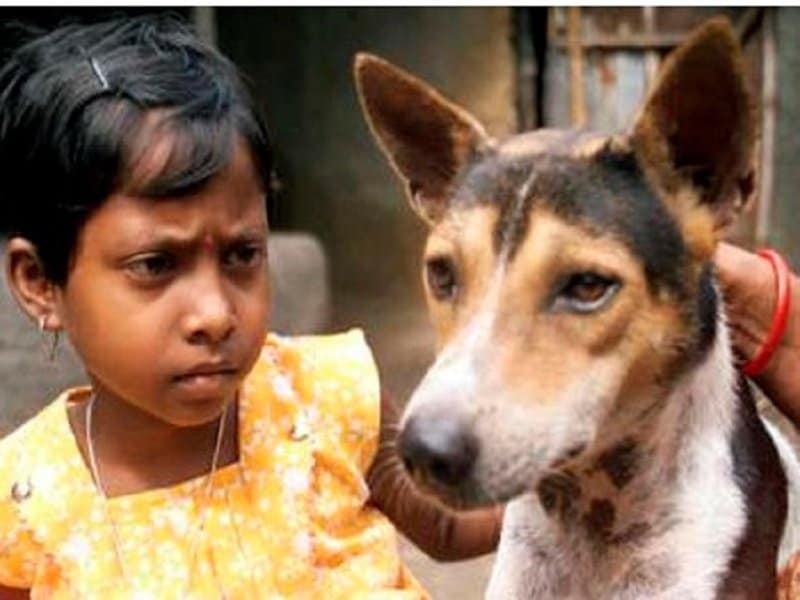 Karnamoni Handsa is a nine year girl from the Santhal tribe in India. She apparently had a tooth rooted to her upper gum and in her tribe, this is seen as a bad omen. The elders suggested she marry a dog to ward off evil spirits, but told her that she was free to marry again and did not need to divorce the dog. 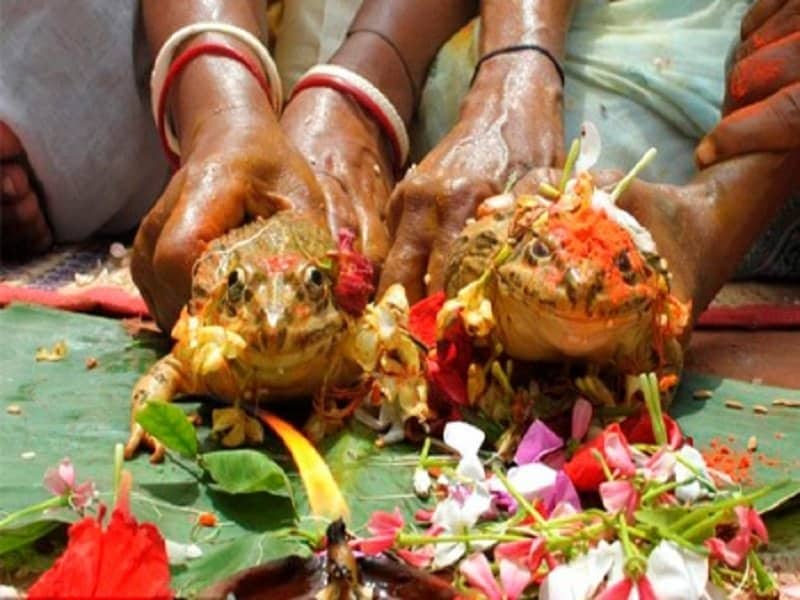 Two seven-year-old girls named Vigneshwari and Masiakanni were made to marry two frogs based on a bizarre ritual in a remote village in India. The girls apparently had to marry the frog ‘princes’ in order to prevent the outbreak of a mysterious disease in the village. 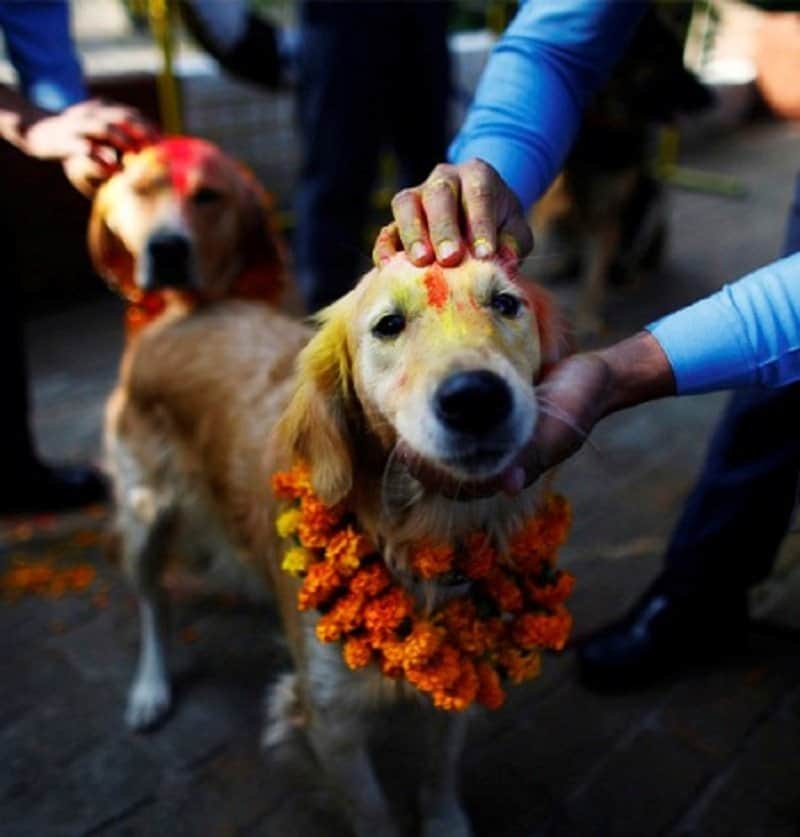 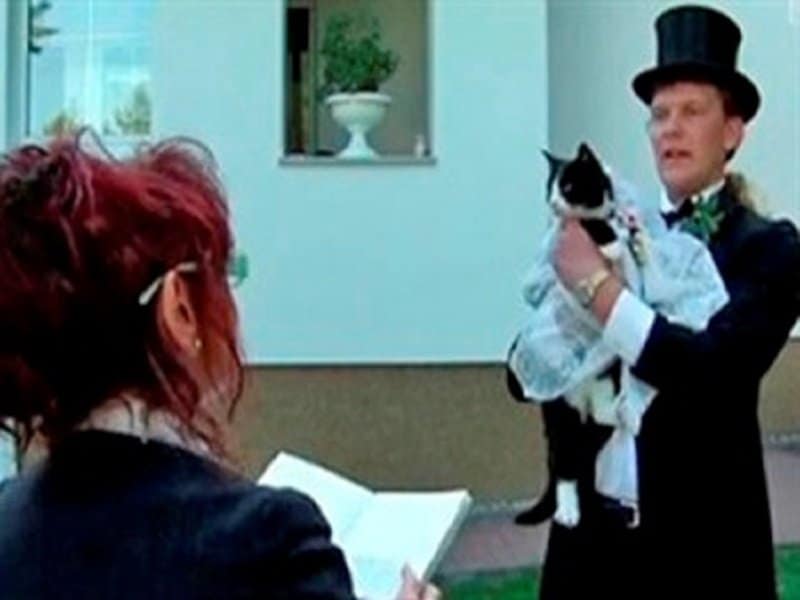 Ume Mitzscherlish was a German man who loved his cat a lot. When the vets told him his cat was asthmatic and it didn’t have too much time to live, Ume decided to marry the cat to show his love for the feline. Unfortunately, marrying an animal is illegal in Germany so Ume had to eventually stage a wedding.