10 Of The Most Gruesome Deaths In Movies

One of the things that you can count on in any Hollywood movie is that at some point a person will undoubtedly meet a grisly end. Even in the case of Disney animated films, plenty of characters still die in various circumstances. Death is simply part of the industry – a way to up the stakes and induce dramatic tension. Unfortunately for the characters concerned, not every death is a quick and painless one. There have been countless morbid and gory deaths in hundreds of movies and these are possible the most gruesome ever seen on screen.

A History of Violence 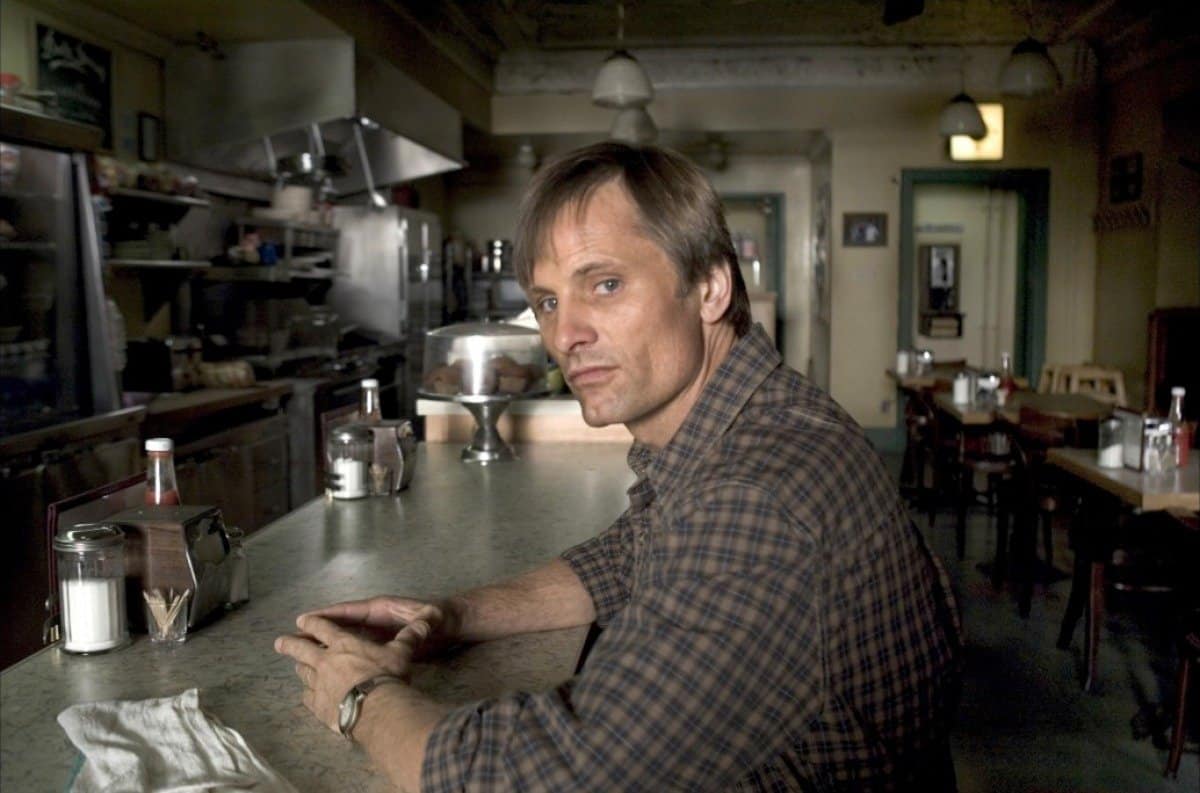 Like many of David Cronerberg’s films, A History of Violence contains plenty of scenes of exceptional barbarity. Though it is definitely less gruesome than some of his other movies, it still features one robbery scene where a man is shot in the back of his head, with the bullet tearing through his skull and ripping his face off. The man is then left to die on the floor with his flesh spewing from the wound. 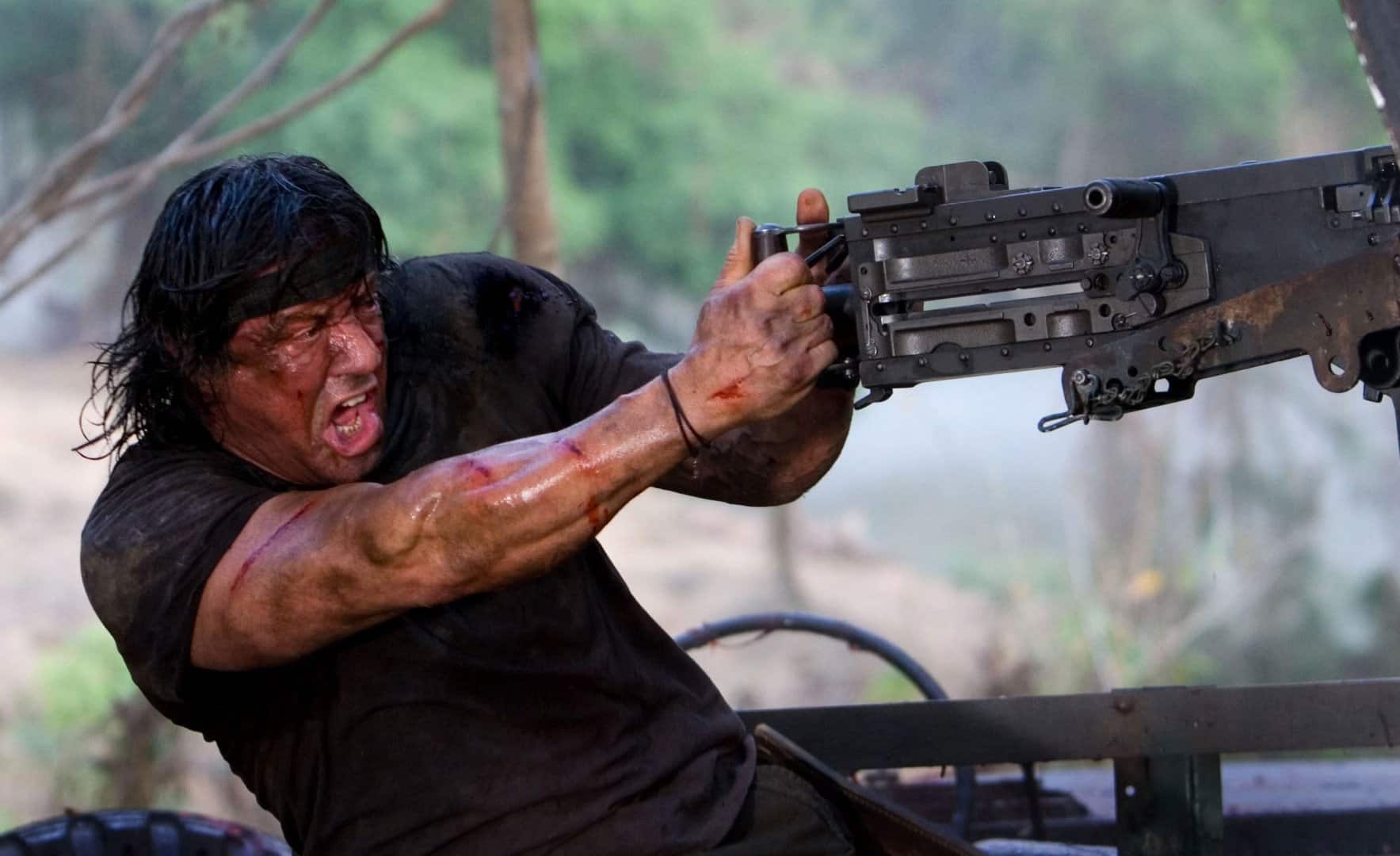 The movie Rambo is filled from start to finish with staggering amounts of violence, with characters constantly meeting shocking deaths. The most ghastly part of the movie doesn’t involve one particular death but a whole host of killings when Rambo uses a machine gun to take down scores of men at the same time, cutting through the enemies and shredding their flesh.

Indiana Jones and the Raiders of the Lost Ark 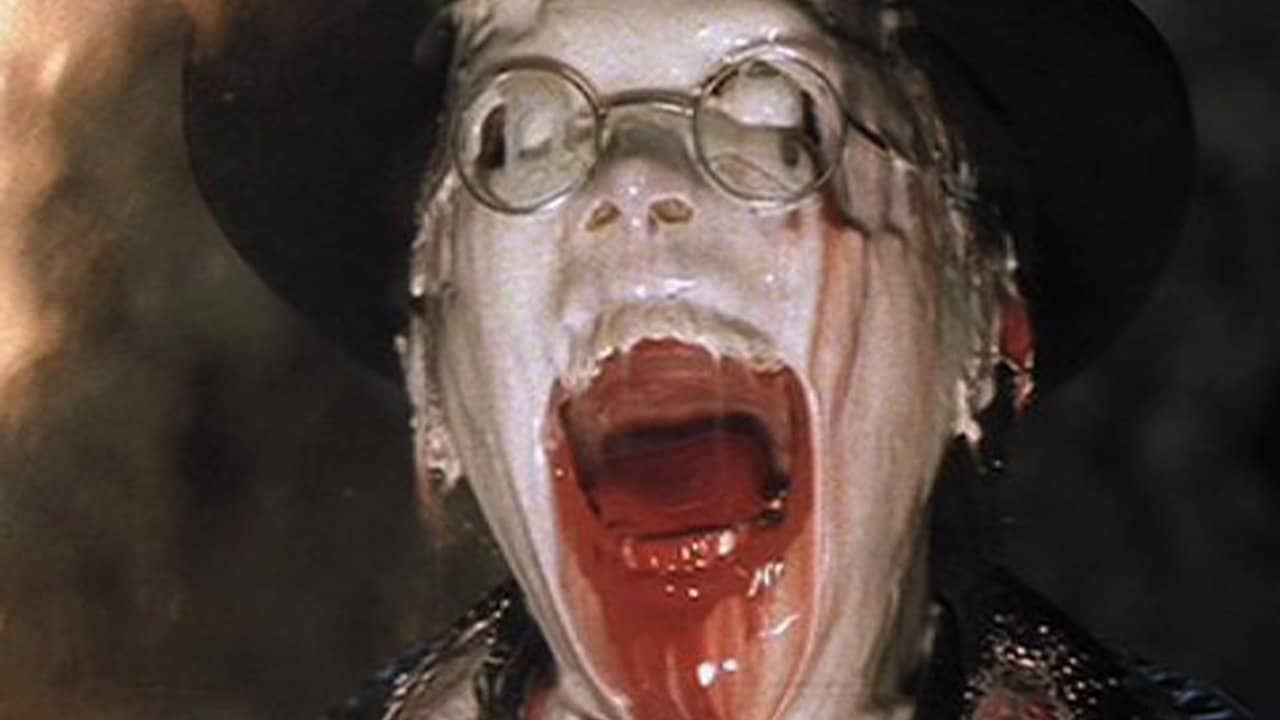 Indiana Jones and the Raiders of the Lost Ark is a fairly pedestrian film in terms of gore. While there is plenty of action, gunfights and deaths throughout the movie, few of them are anything more than what you would come to expect from a family friendly adventure. That all changes at the end though when the Nazis open up the Ark of the Covenant and the divine power proceeds to melt their faces, with the skin and flesh falling away to reveal the bones beneath. 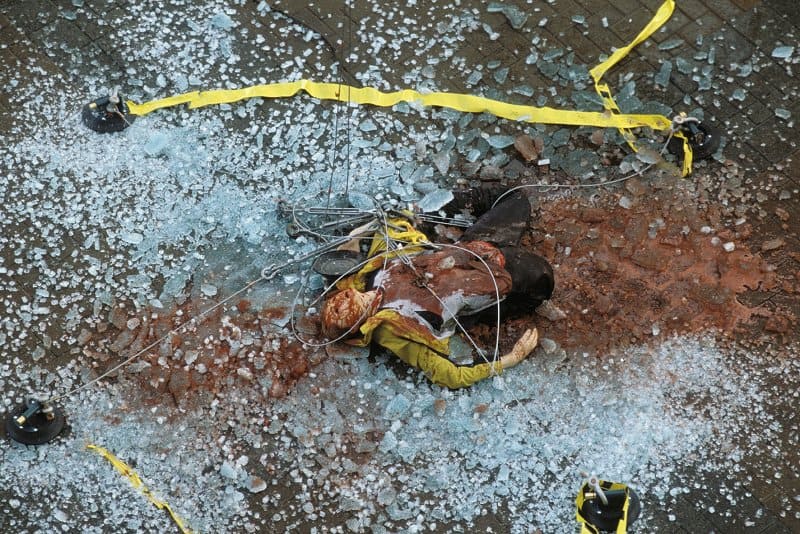 The Final Destination franchise prides itself on the gruesome and sickening deaths that the characters go through after they escape huge accidents. Arguably the worse is from Final Destination 2 when teenager Tim manages to avoid choking to death at the dentist and is instead crushed to death by a falling pane of glass. 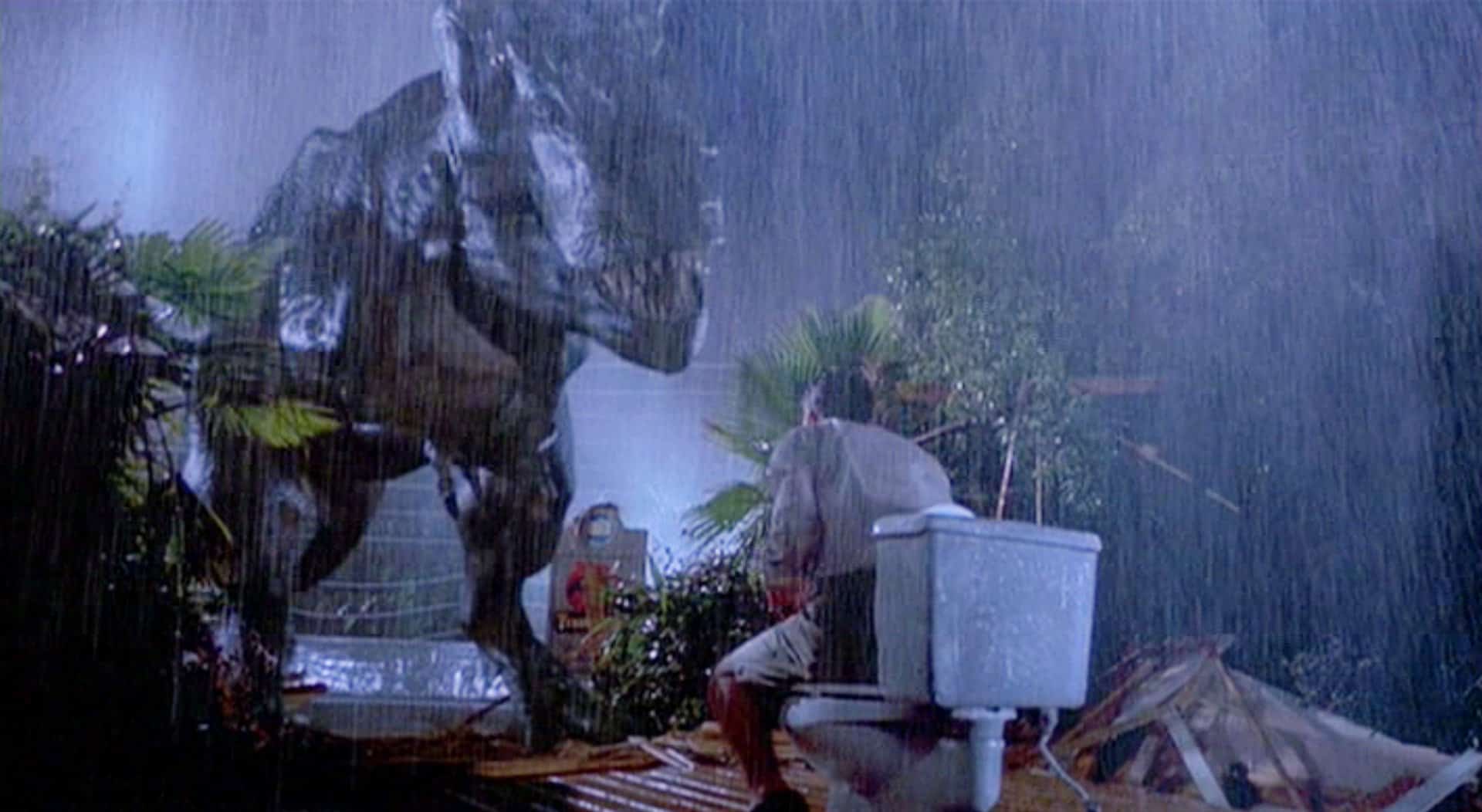 A film all about dinosaurs that get loose and are free to attack humans was always likely to have a few gruesome deaths in it. The worse of them probably befalls the lawyer Donald Gennaro who is attacked by a T-Rex while sitting on a toilet. The dinosaur doesn’t just kill the man though, he actually bites him in half.

Day of The Dead 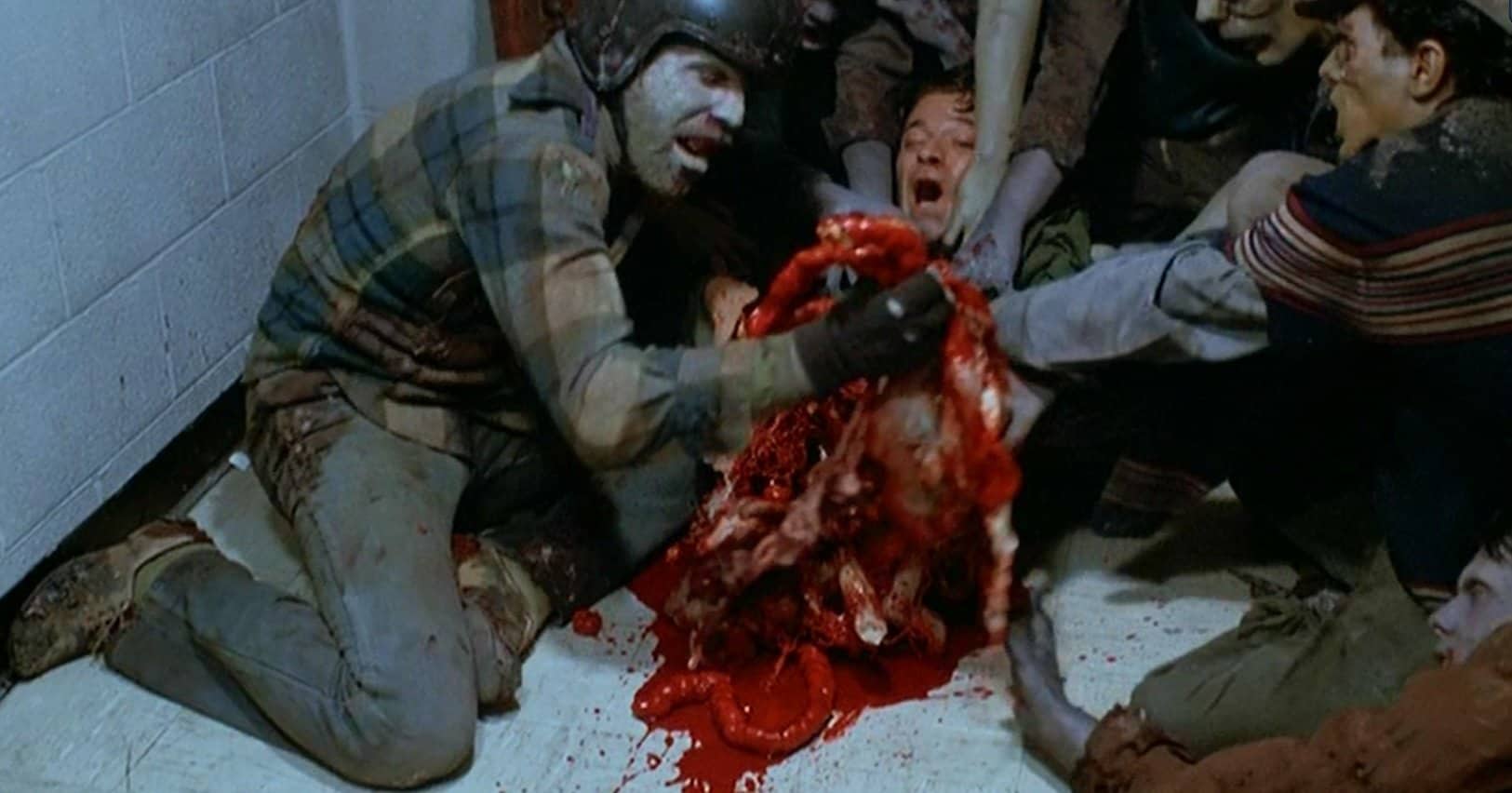 Day of the Dead features probably the most terrifying death of any zombie movie that has ever been made. As Captain Rhodes attempts to escape from the oncoming horde of mindless creatures, he is shot and wounded. As the character falls to the floor he is accosted by the zombies who proceed to rip his stomach open and pull out the contents of his torso. 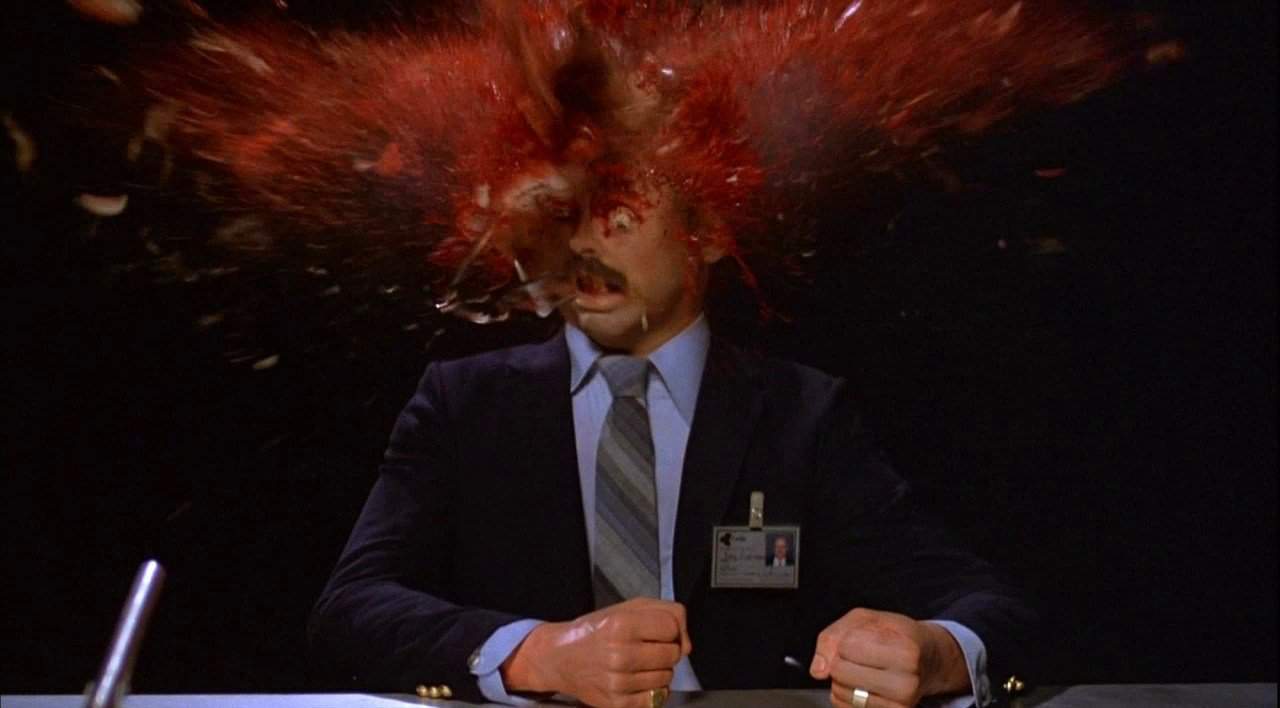 Few movies have perfected the art of showing a person’s head exploding in such horrific detail as Scanners managed. While attempting to read the mind of a volunteer, one of the scanner’s doesn’t realize that they also have telekinetic powers and their mind is literally blown, with bits of flesh, skull and blood exploding in every direction.

The Story of Ricky 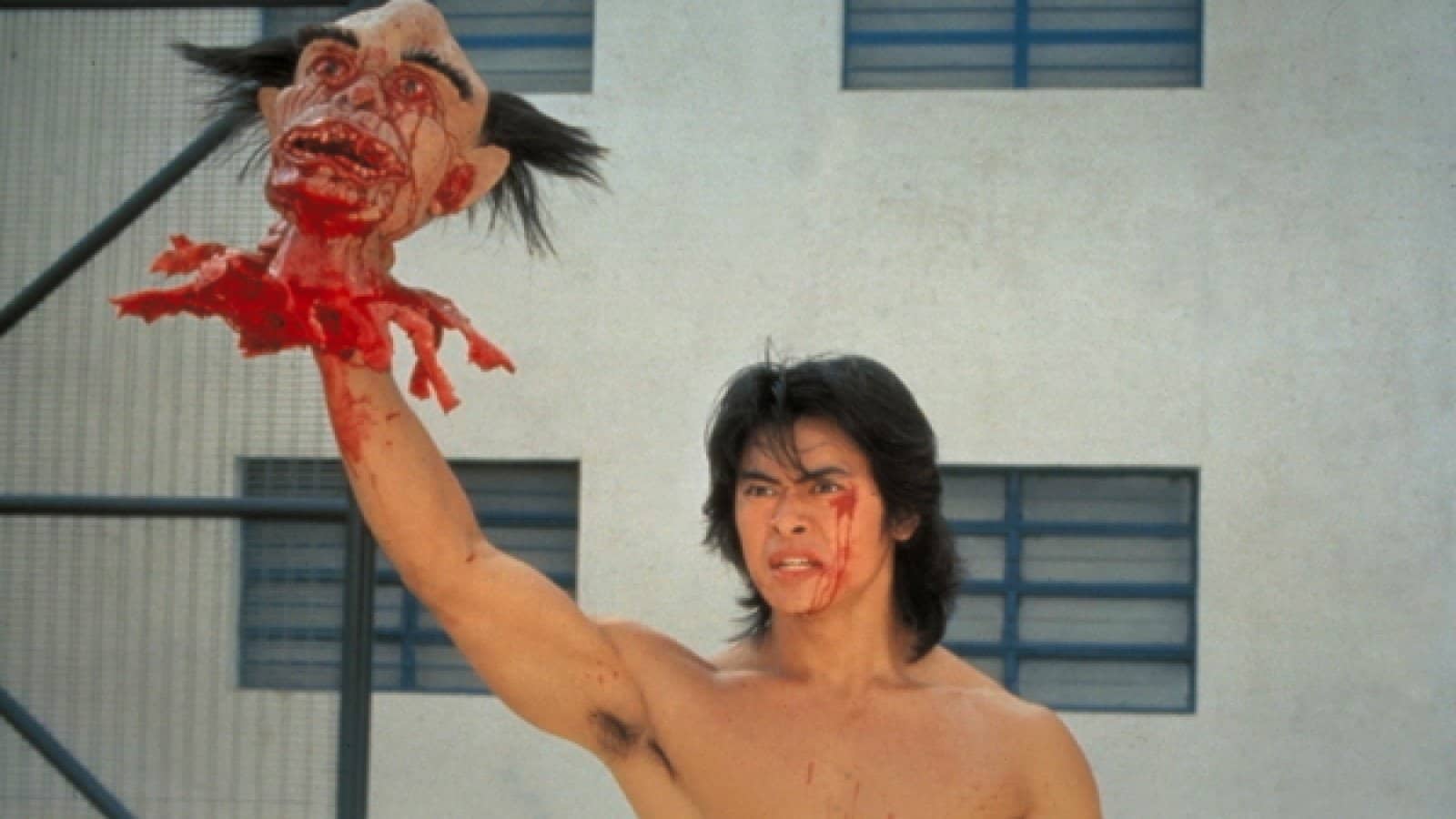 The Story of Ricky is one of the goriest films ever produced. It is a Japanese movie that tells the story of a man who decided to tackle corruption in a prison by physically beating it out. This sees Ricky fighting huge numbers of villains with his bare hands, ripping off their heads and punching them so hard that their heads actually explode.

Hellraiser is another horror film that terrifies its viewers with the intense ways in which it kills its characters. The Clive Barker movie features a number of gruesome scenes and the worse of them is most likely the part where the Cenobites capture Frank and begin to rip his body apart with a number of chains, literally pulling the skin off his body.

John Hurt’s character of Kane probably suffers one of the worse deaths imaginable in the film Aliens. Having been infected by the grisly species he is confined to a sickbed, when the alien begins to burst from his chest cavity. The gruesome act leaves the dying Kane with his body essentially having exploded from the inside out.