10 Incredible Face Tattoos And The Stories Behind Them

What do you think when you see a man covered in tattoos? A freak? A criminal? Even though we’ve passed the point of intolerance and have become quite a politically correct society, the truth is most of us still hold and base their opinion on different prejudice. However, beauty is abstract and passion can be diverse. With their faces filled with ink and tattoos, the following 10 individuals are not only extraordinary and incredible in their looks, but also have some amazing stories. Having that in mind and without further adieu here are 10 incredible individuals with face tattoos and the stories behind them. 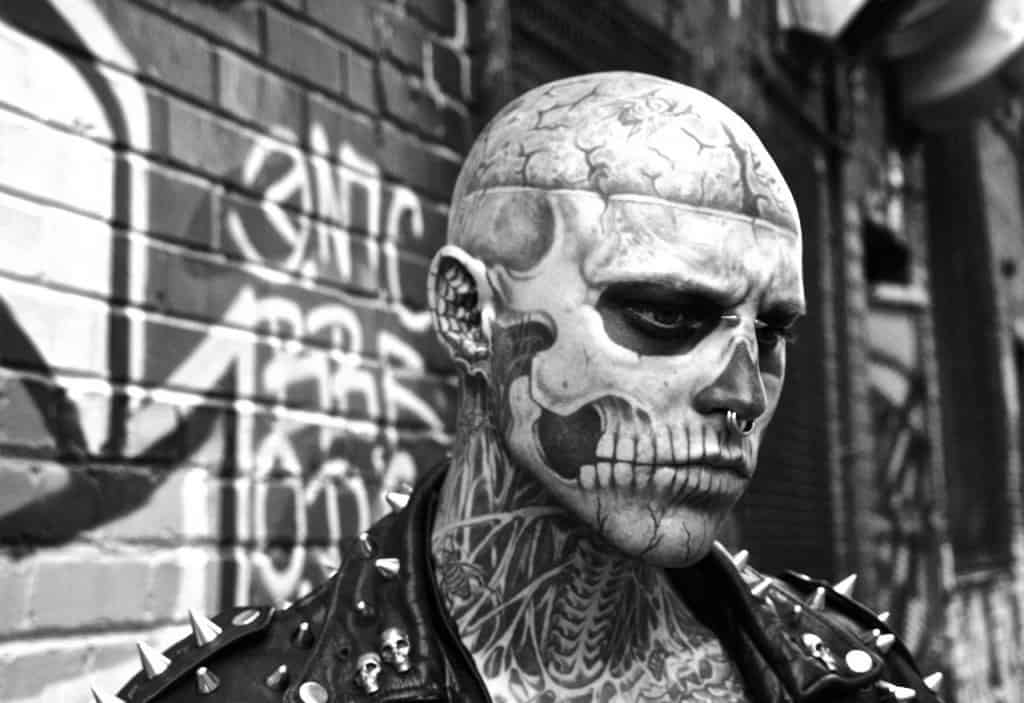 Living on the streets of Montreal, doing every little job he could find in order to pay for his tattoo obsession, Rick “Zombie Boy” Genest was discovered by Lady Gaga’s stylist Nicola Formichetti. Featured in the 2011 video of “Born This Way” he soon shot to fame and became one of the most sought after male models. 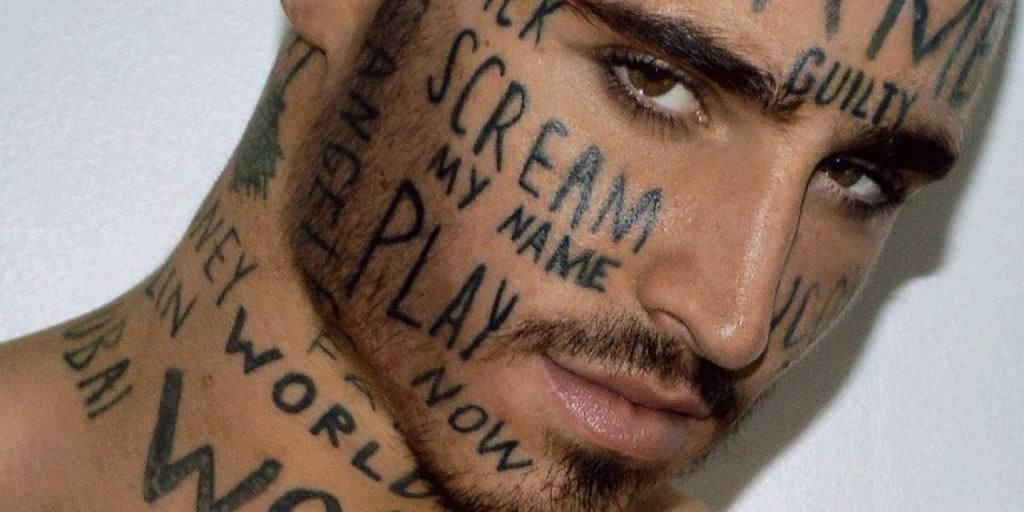 A 24-year-old Canadian model Vin Los is obsessed with fame. Wanting to become the most famous man on earth, he started tattooing his face in handwriting with a ton of buzz words. “I want to embody pop culture. You could look at me in a hundred years and really get the idea of what pop culture was like in the early 2010s,” he stated in one of his interviews. 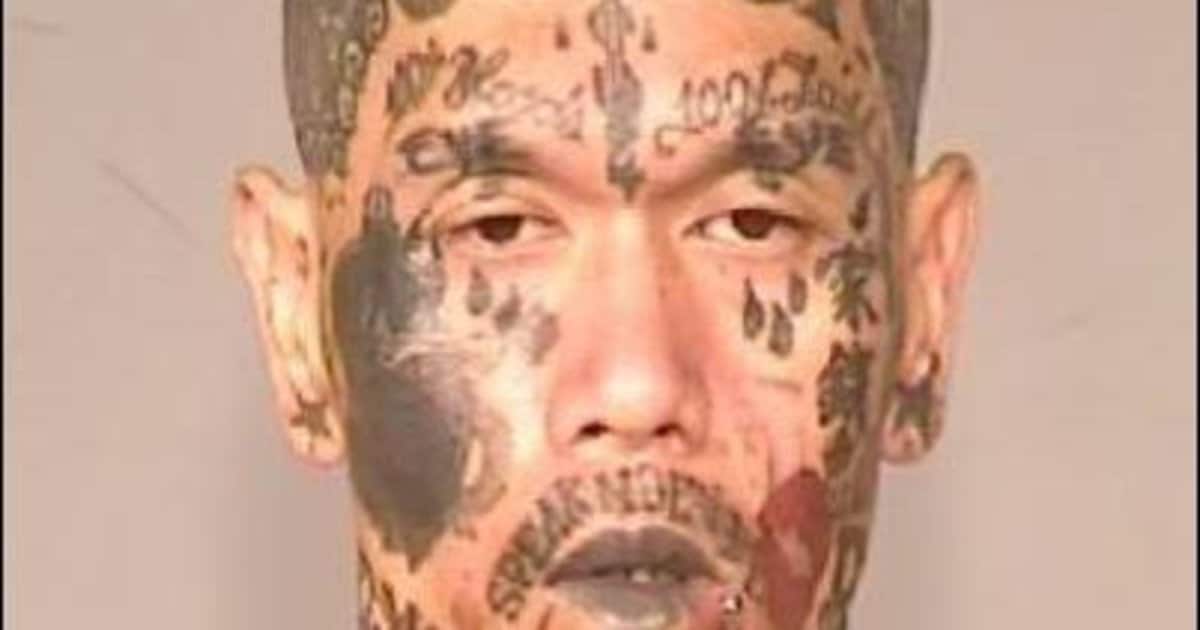 Arrested in March 2016, the mug shot of Khamprasong Thammavong, 33, made him one of the most infamous criminals in the world. A documented Laos Blood gang member, he was pulled over for a routine traffic stop, when police discovered that he was out on probation. Searching his home the police found a semi-automatic rifle and a semi-automatic handgun along with 38 illegal marijuana plants. He was booked into the Fresno County jail on several charges, but his mugshot went viral on the internet, making him infamous for his tattoo-covered face. 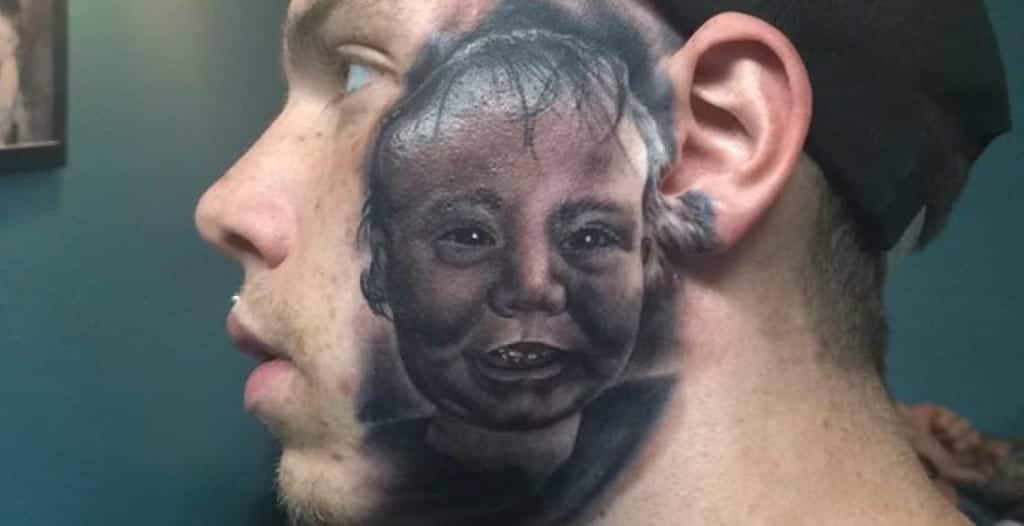 A 20-year-old Houston man, Christien Sechrist made an unorthodox decision and covered the left side of his face with a bruise-colored baby tattoo. The young baby face belongs to his son, who had an apparent brush with death. Paying tribute to his child, Sechrist has received a ton of backlash from social media, but he loves it, saying that “a beautiful tattoo of a beautiful face on top of another beautiful face,” is not something people should be displeased with. 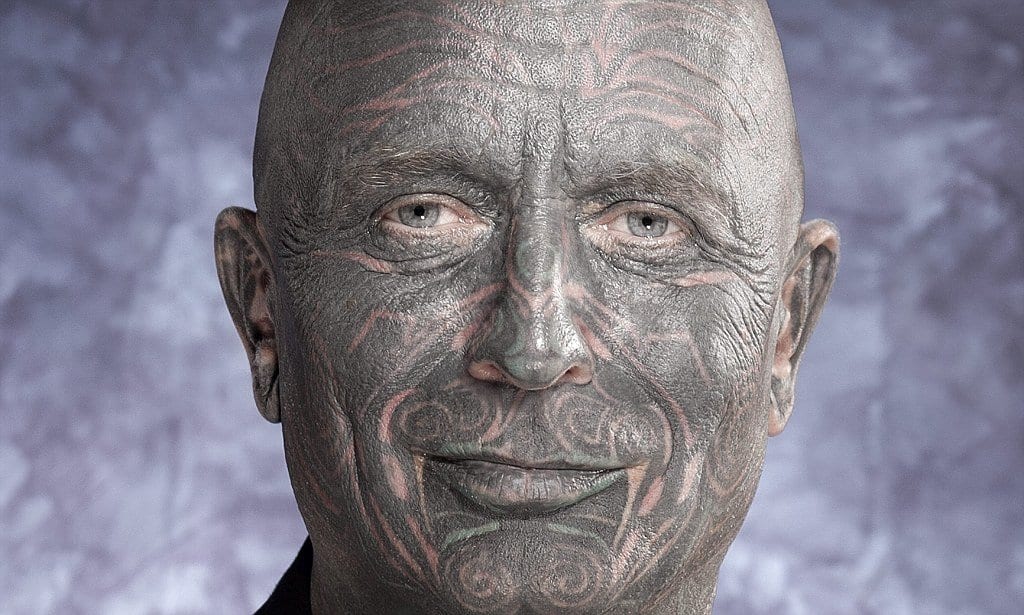 Vladimir Franz is probably the world’s most infamous tattoo-faced man. The 56-year-old is quite fascinating. Having a law degree, he made headlines when he decided to run for president of the Czech Republic. A stage designer, a postmodernist painter and an opera composer, as well as a drama professor, Franz believes that his tattoos are like his private little garden. “They are not a handicap, they are added value. Elections are not a beauty contest. It is all about tolerance,” he has stated. 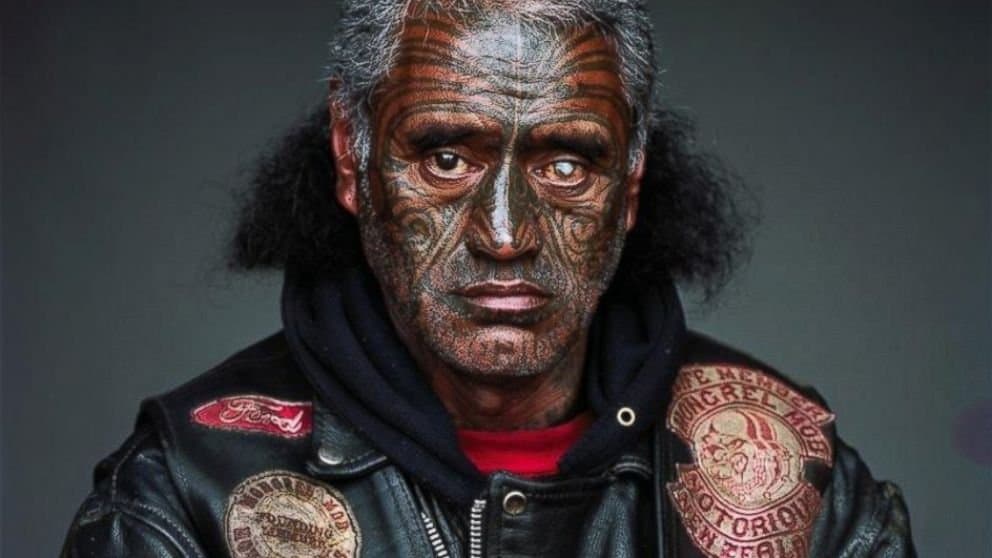 Jono Rotman is a New Zealand photographer, who made one of the largest exhibitions featuring portraits of mongrel mob members and their tattooed faces. 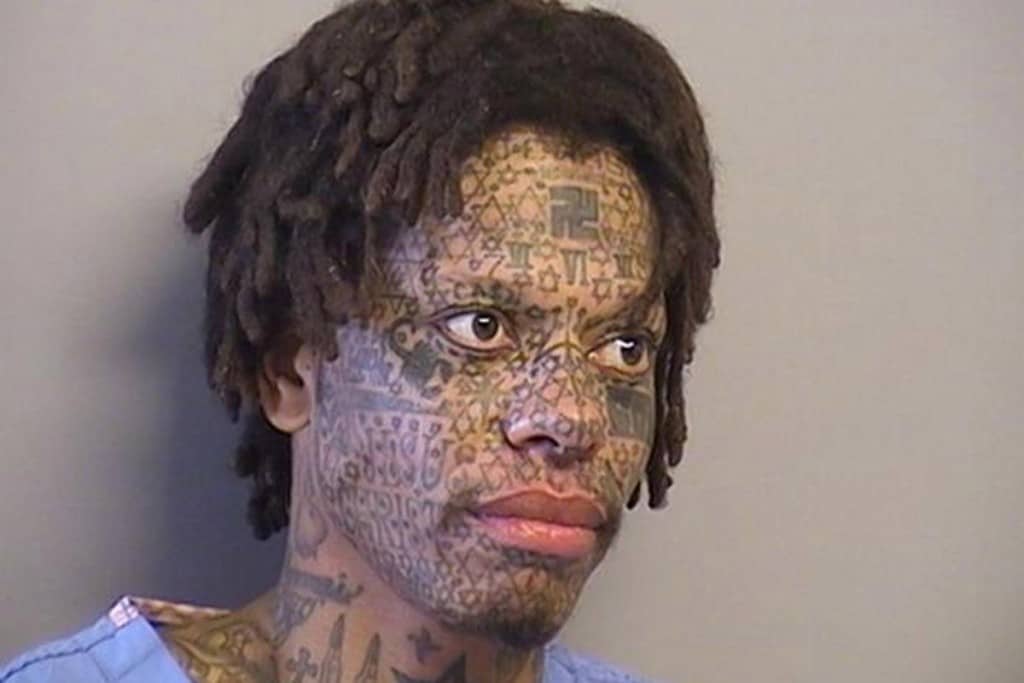 Michael Carter, 36, from Oklahoma, always keeps getting in trouble with the law. In January 2016 he was nabbed for causing a ruckus at a fast food restaurant and a month later he was arrested after police got reports he was pointing a gun at drivers, which turned out to be a toy. Carter was arrested a third time, when an employee at the Day Center for the Homeless refused him service and he refused to leave. Most of his trouble comes from his bizarre tattoos, which include a swastika and Jesus Christ. 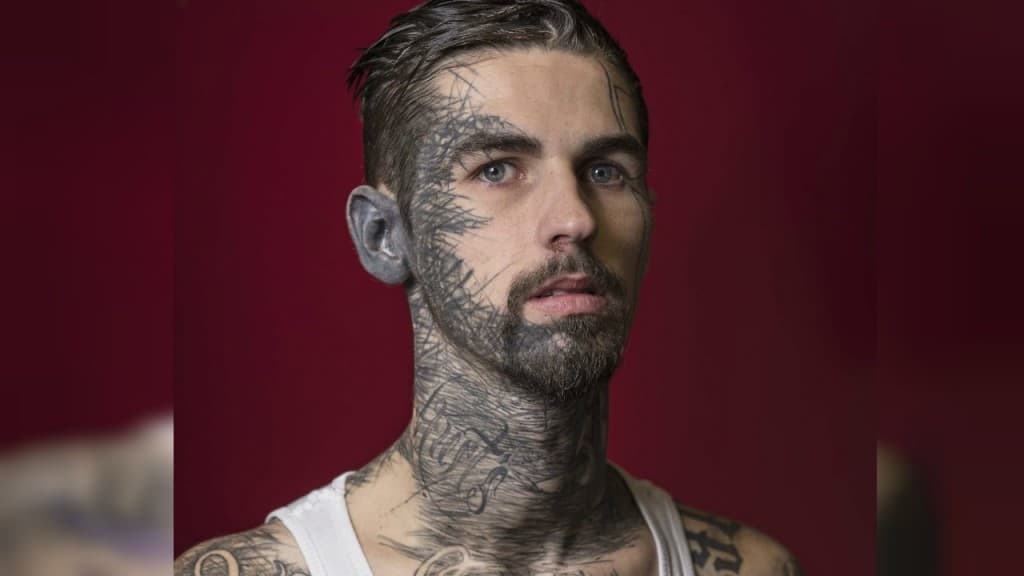 Starting tattooing his face at the age of 18, Gino Dartnall, 24, is part of a photography project “Facial Tattoos,” by UK photographer Mark Leaver. Leaver wants to get personal with the tattoo subjects and to strip away the presumptions, showing those men and women at their most intimate, proving that they are not that different than us. 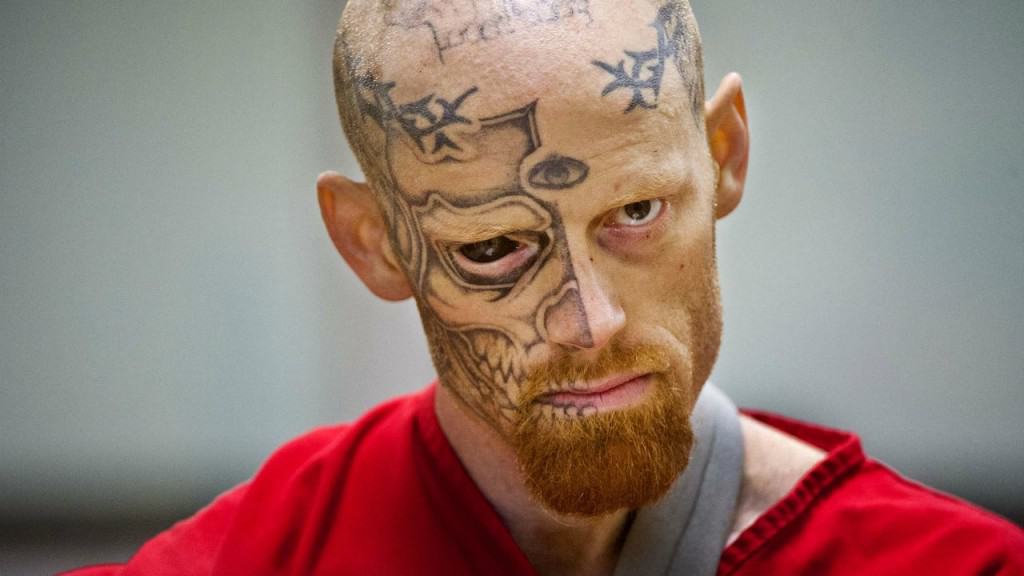 Much like a comic-book villain, Jason Barnum is quite a notorious criminal. Nicknamed “Eyeball,” for his tattooed eye, Jason Barnum, 39, went on a crime spree to feed his heroin addiction. His crime spree included stealing cars and burglarizing homes. When staying at a motel, officers who were investigating a string of burglaries in Alaska in 2015 noticed a vehicle, which was linked to the crimes and went to his room to investigate. The criminal then opened fire, but the officers quickly shot back, hitting him in the arm before arresting him. Barnum was jailed for an attempted murder of a police officer along with his other crimes. 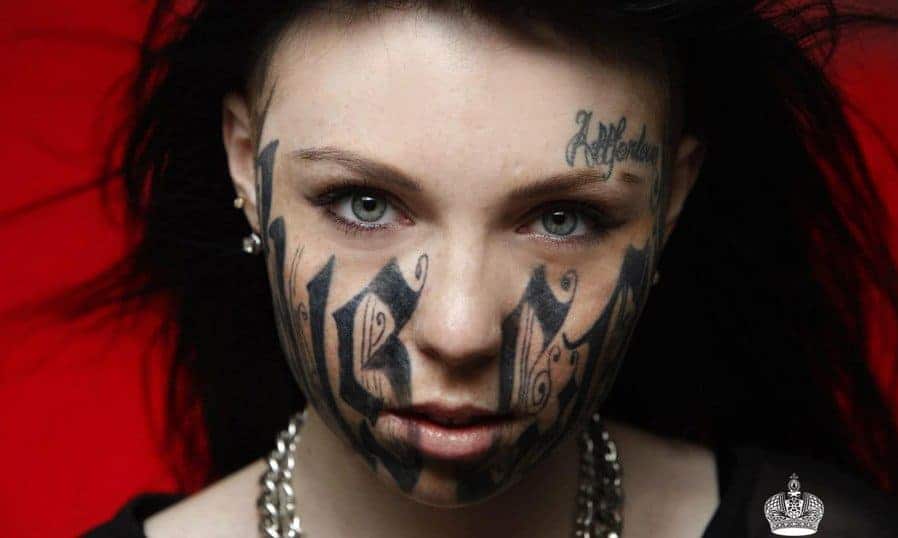 Rouslan Toumaniantz is one of the most controversial of tattoo artists. He became notorious when he decided to inscribe a galaxy of stars on the face of his then girlfriend Kimberley Vlaeminck, who was just 18 back then. After he split up with her, in 2013, he struck again by tattooing his Christian name in Gothic letters on the face of his new girlfriend, less than 24 hours after they first met. Lesya Toumaniantz from Saransk Russia allowed him to do that and since then they’ve married.