The human brain is an amazing thing. It has helped our species rise up above the day to day struggles of existence and to create art, culture, observe the universe, and even visit the Moon. However, as exceptional as our brains are, they aren’t perfect. For example, humans are awesome at recognizing patterns visually. This is useful in day to day life but can lead to us being tricked – easily – and even without the use of photo manipulation software such as Photoshop!

Don’t believe us? We set out to prove just that and were able to find 20 optical illusions that not only prove we can be tricked easily, but with everyday photos (sometimes carefully planned) that are completely 100% authentic! So, without further ado, here are 20 Unbelievable Optical Illusions That We Swear Aren’t Photoshopped.

Which Parent Is Holding Their Daughter? 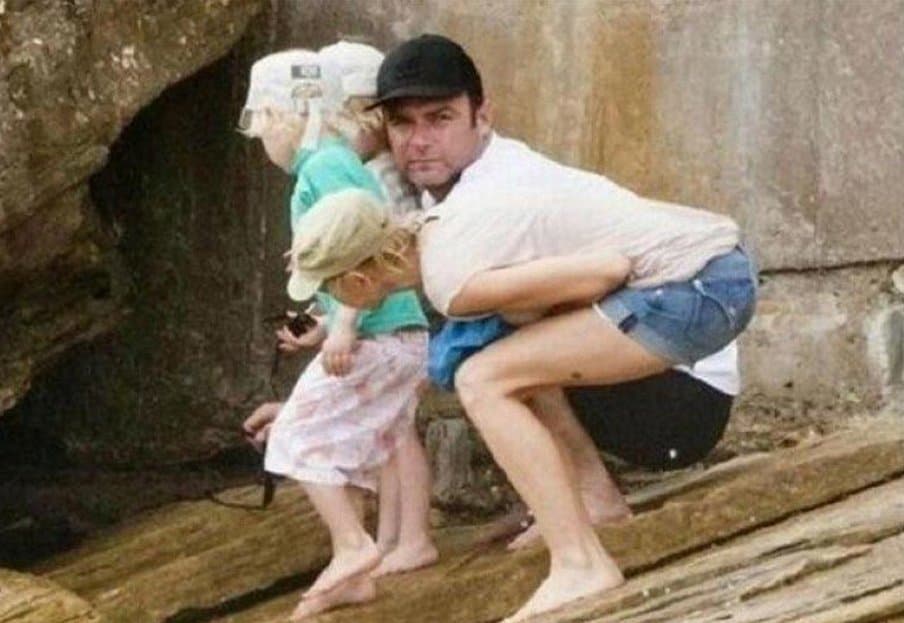 We had to look closely at this one, but we think we figured out that the father is holding the child and the mom just happens to be leaning in. Whew! For a second there we thought the father had a strangely feminine body…

Even The Dog Is Confused 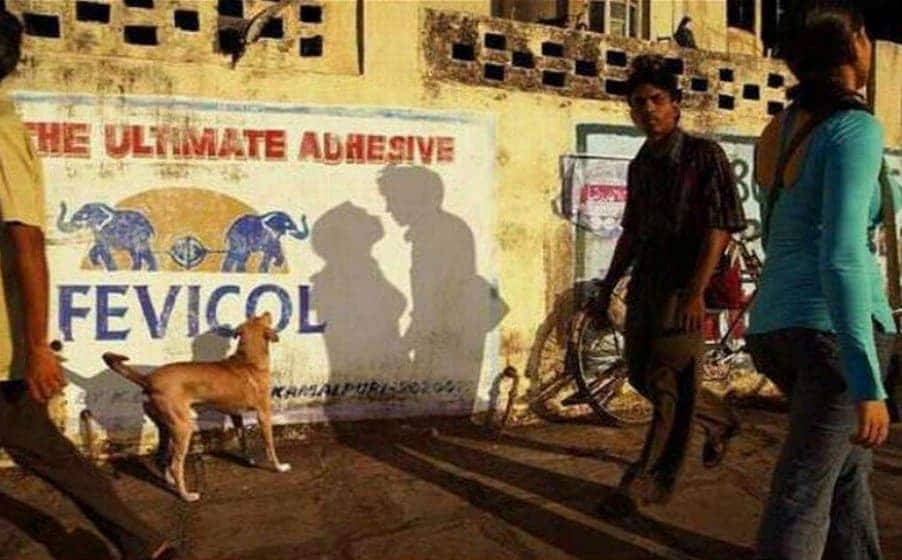 Lovers joined together in an embrace at sunset? Nope! This photo happens to have been taken at just the right moment, capturing two passing strangers as they walk past each other. 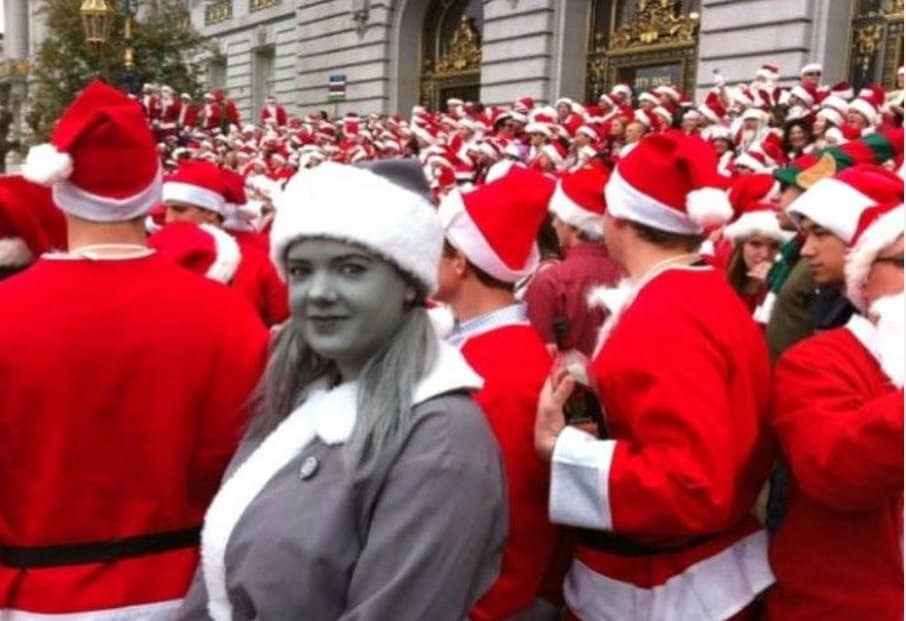 Amidst the throng of traditional red-and-white Santa’s is a female, pig-tailed Santa that appears to be photoshopped. The main reason being she appears to be black and white! Sounds plausible but you’d be wrong! The woman, named Brody S., is now famous for this photo which was taken at “Santa Con” which takes place in San Francisco every year. The kicker? Brody hand-made the Santa suit! 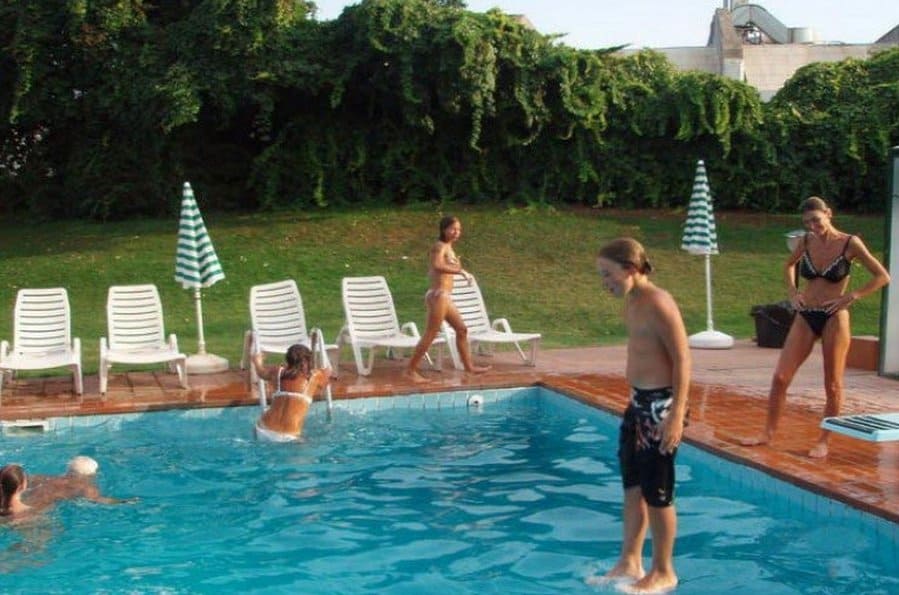 This isn’t photoshopped, it’s just a photo that was extremely well timed. The young man in the photo jumped into the pool and a photo was taken just as his feet touched the water. Sure looks cool… 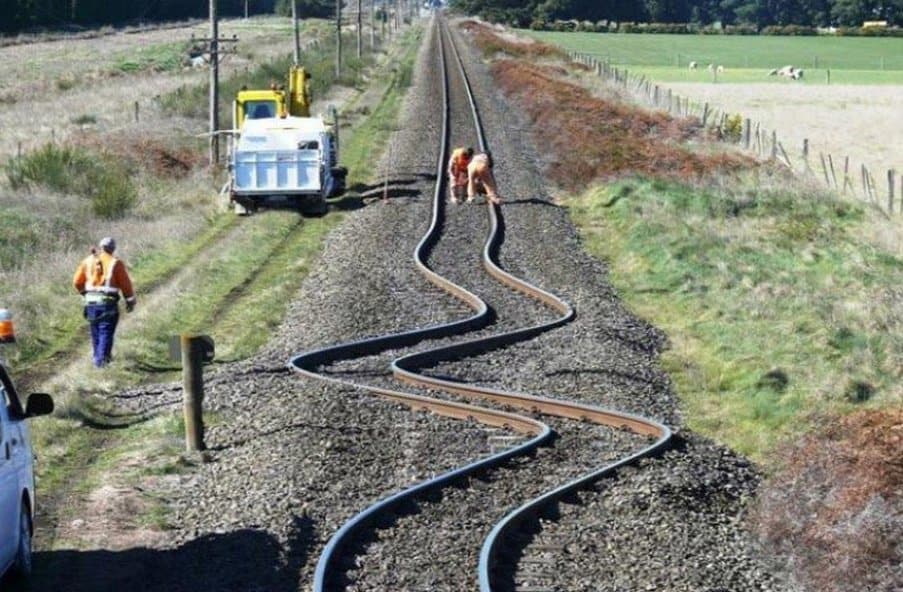 This has to be photoshopped, right? Wrong. Occurring in Canterbury, New Zealand in 2010 following a particularly powerful earthquake, the sheer force of the quake caused the tracks to buckle and become warped. You don’t see that every day. 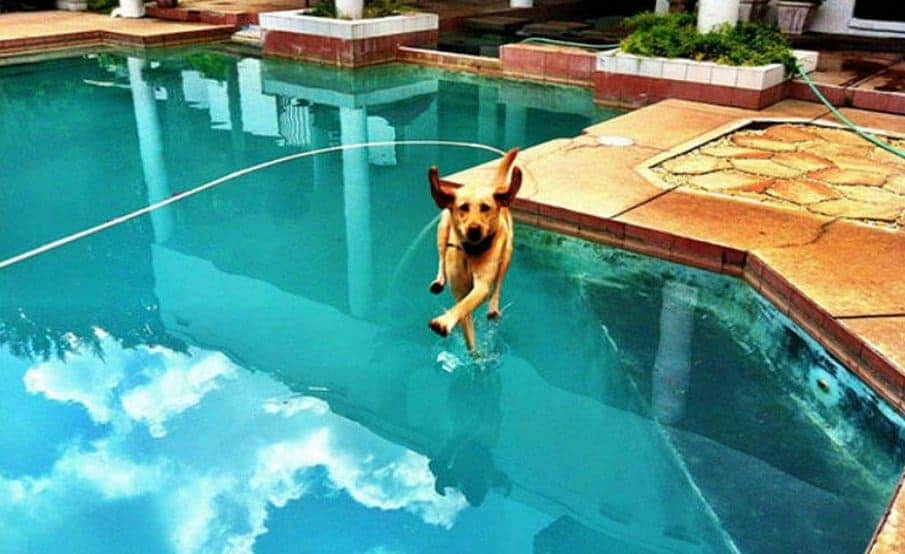 Like the young man “walking on water” just a few photos before, this photo isn’t faked — it’s just superbly timed. A fraction of a second later, this dog will be soaked. 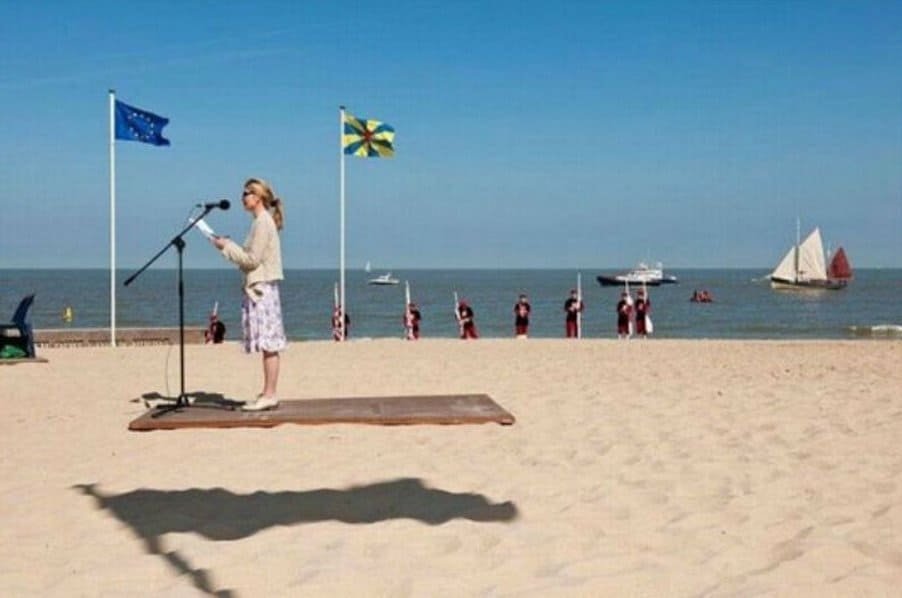 Is this woman giving a speech standing atop a magic carpet? Nope! What appears to be a shadow for the “magic carpet” actually happens to be the shadow of a flag flying behind the photographer. We were sad when we realized this but were equally amazed that it wasn’t photoshopped! 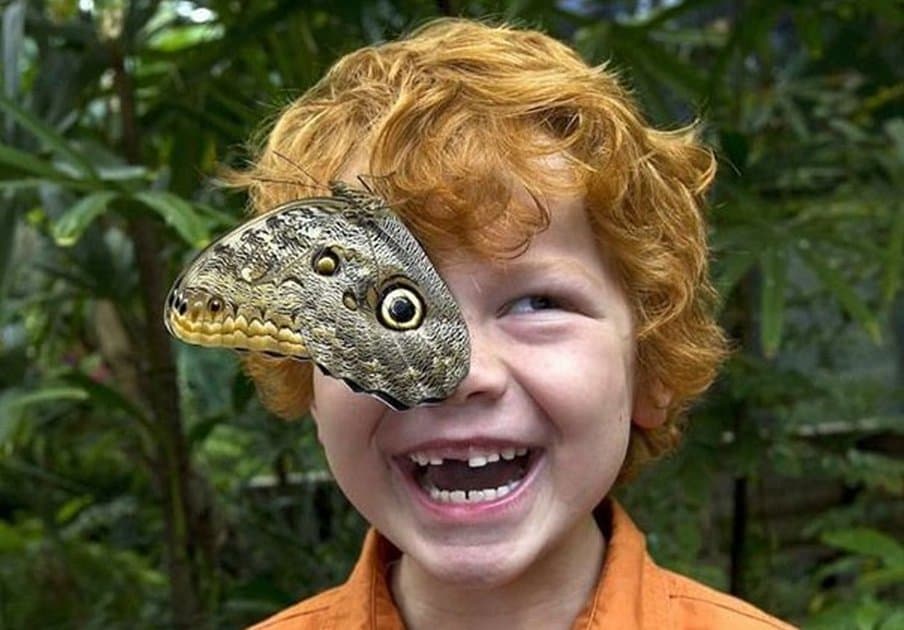 Just glance at this one out of the corner of your eye and you’ll swear you’re losing your mind. Upon closer inspection, you’ll see that this butterfly, with what appears to be a human eye on its wing, landed on just the right spot for the photographer to snap this awesome photo. 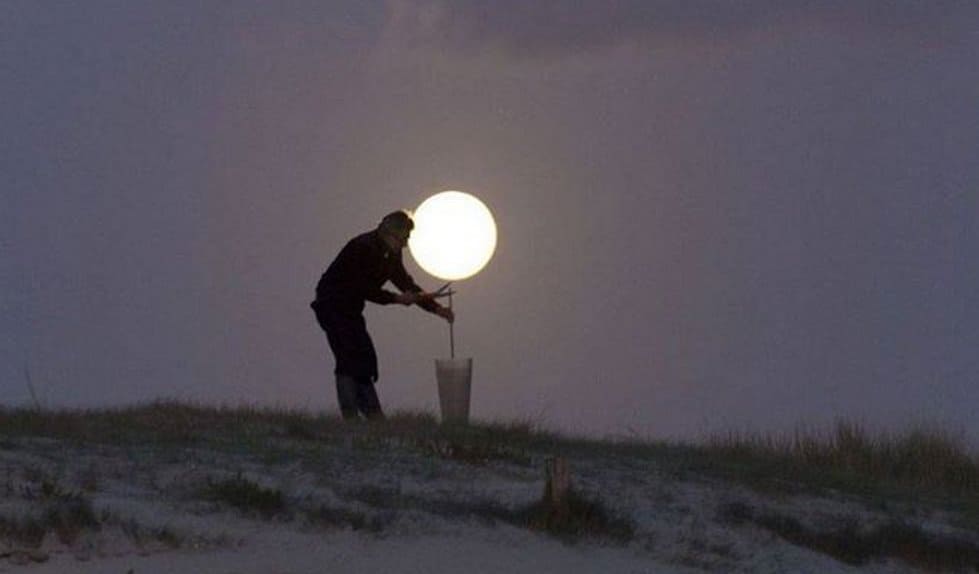 We’re not sure if this was planned, all we know is that it wasn’t photoshopped. 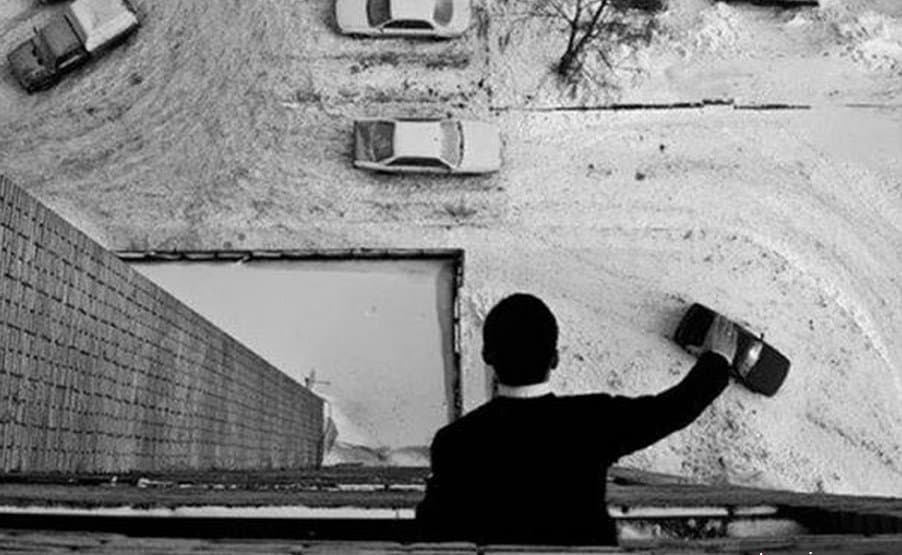 This photo happens to be rather famous, and was taken by famous photographer Aleksandr Malin with his Nikon camera under the title “Changing”. Like many optical illusions, this photo makes use of what is called “forced perspective” to trick the human eye. No photoshop needed! 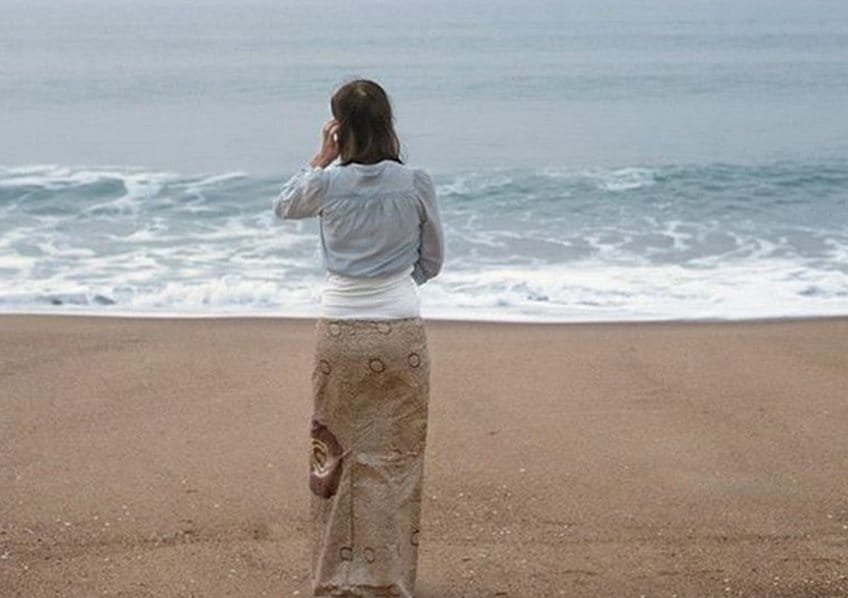 This was obviously staged because it’s just too perfect. The important thing is that this wasn’t edited in any way.

Sitting In A Wall Of Water 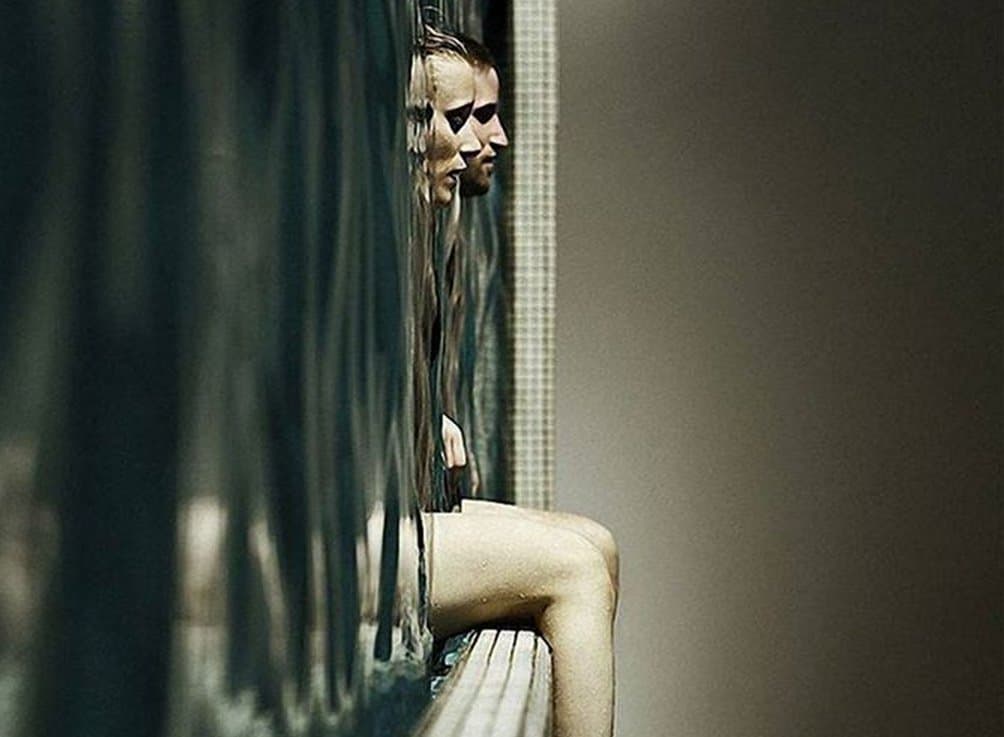 This isn’t the only example of this phenomenon, but it’s one of our favorites. The trick? Not phot shop. The camera is tilted sideways while the swimmers simply have their feet sticking out of the pool while they float on the surface. Go ahead, try it sometime.

Clouds In A Can 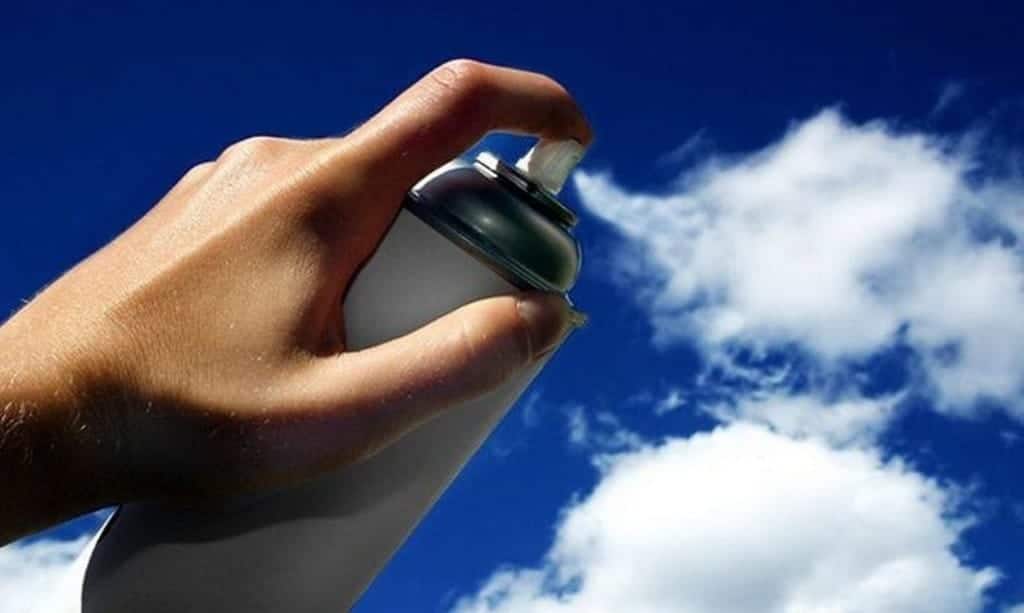 We wish we had thought of this — sadly, we didn’t. The important thing is that anyone can do this and without a fancy computer!

Pouring Out A Waterfall 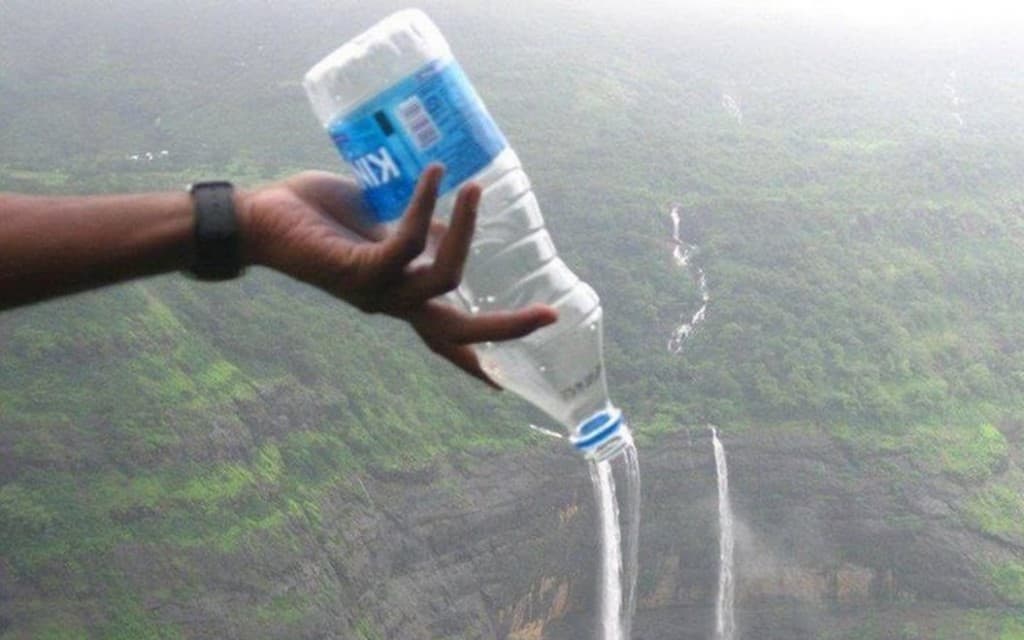 So that’s how God made waterfalls! Well, we guess this person felt like that when they snapped this photo at just the right angle to make it look like they’re pouring a waterfall out of this water bottle.

How Clouds Are Made 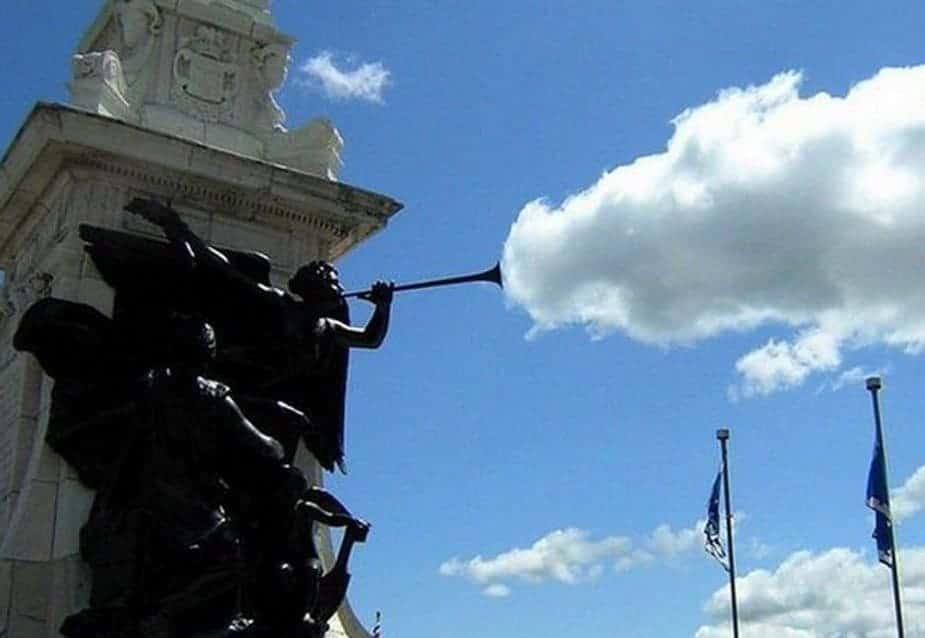 The angle on this photo is superb and while it probably could have been done much more easily on a computer, it was probably way more satisfying to do it this way. 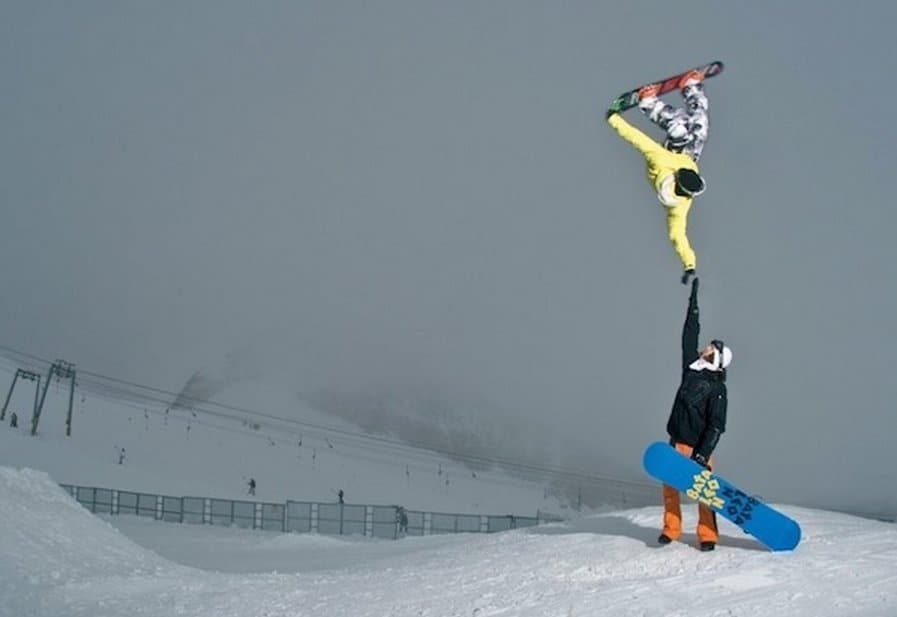 Photoshopped, in the interests of safety? Who needs safety when you can actually take this awesome photograph of a snowboarder high-fiving mid-air? Perfect timing required. 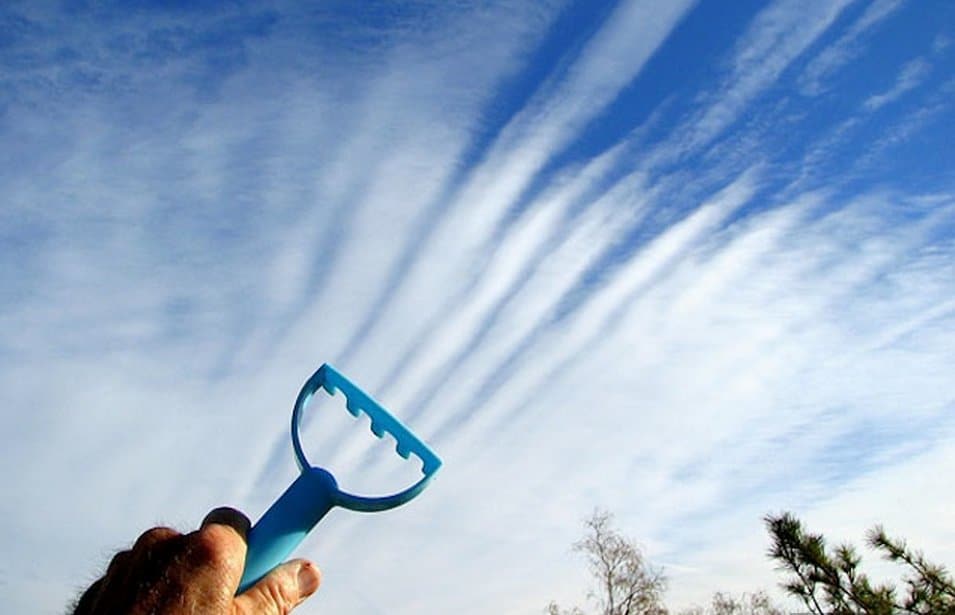 Occasionally, just occasionally, the clouds get wavy as seen here thanks to ebbing air currents. And when that happens, you’ll know to get a small hand rake and create an awesome optical illusion like this photographer did! 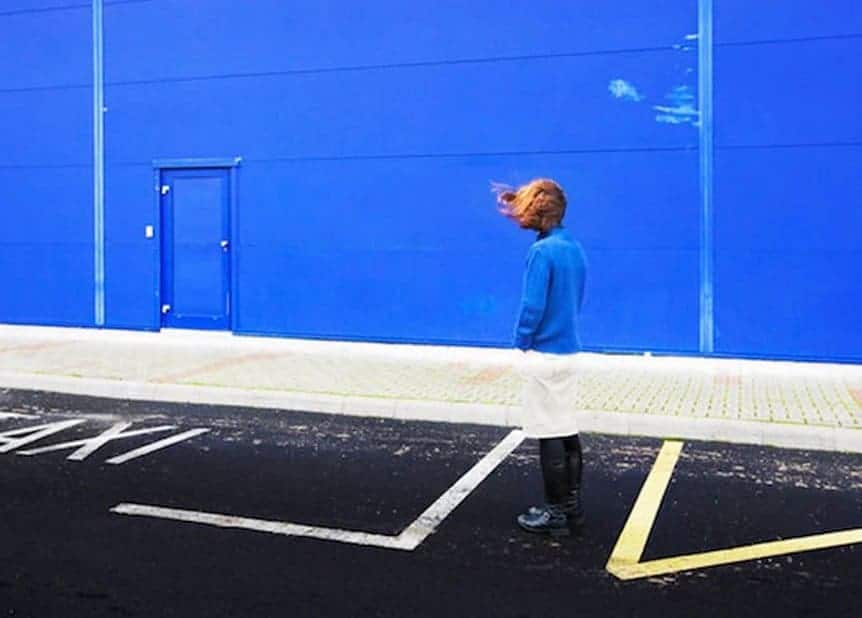 This is just plain cool, and uses the same technique as our previous photo “beach camoflauge.” All you need is a camera and a perfectly chosen wardrobe.

“Drop Off Room” by Regina Silveira 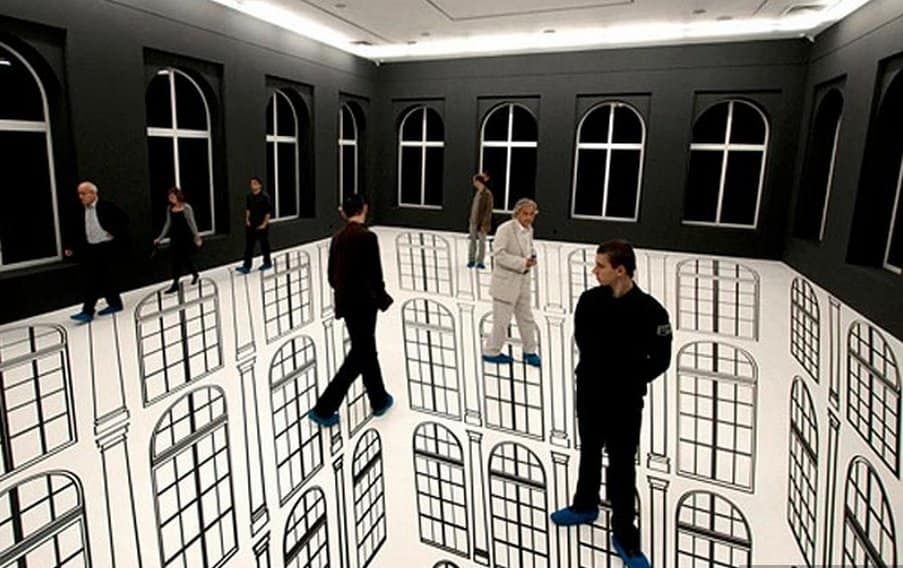 Not only is this room real, you can visit it! This room was painted by optical illusion master Regina Silveira. We’ll understand if you lose your lunch when you walk in. Just don’t look down! 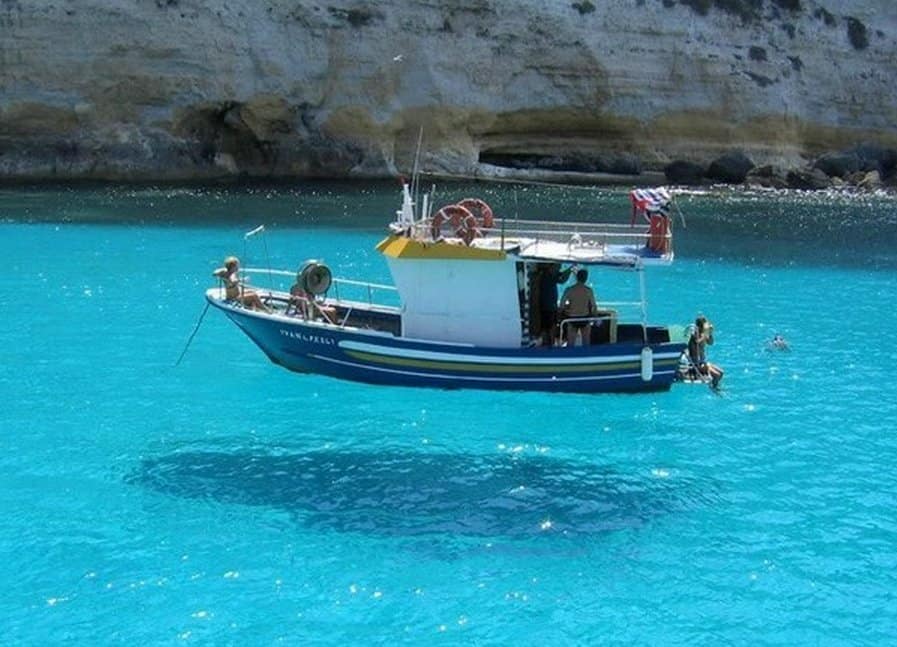 We admit it, we had to stare at this one for a minute before we realized it wasn’t photoshopped. It was only then that we realized the water is just that clear. The shadow you see is actually on the floor of the lagoon where the boat is floating.