20 Techniques Proving Torture Is Beyond Brutal

Torture has been used throughout time – for thousands of years – to ensure someone relays information that the torturer is looking for. Unfortunately, a lot of the time the victim simply stated what their attacker wanted to hear instead of what was one-hundred percent true. Torture has also been known to be incredibly brutal and horrific, leaving many dead, disfigured, or psychologically broken. These are twenty of the most brutal torture techniques that were actually used throughout history in some manner. 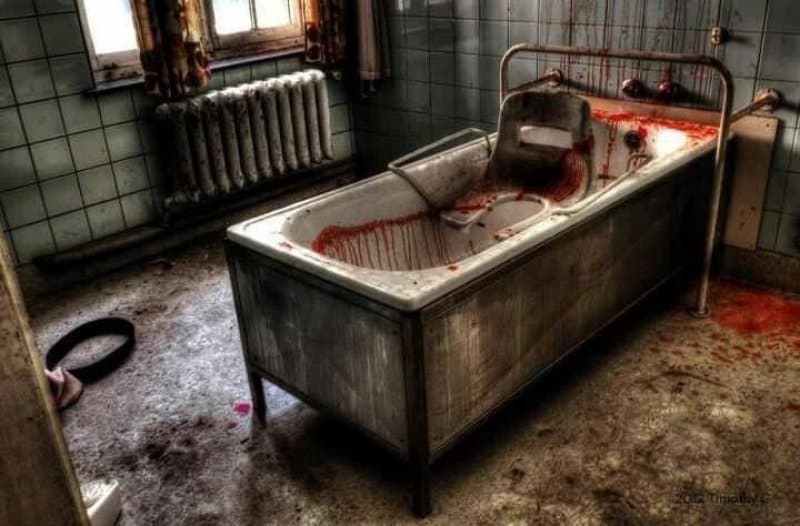 The Tub forced a convicted individual to sit in the wooden tub with just their head sticking out. The torturer would then paint their face with milk and honey, allowing flies to feed on their skin. The victim would end up swimming in their own bodily fluids and excrement before being devoured by maggots and worms as they slowly rotted. 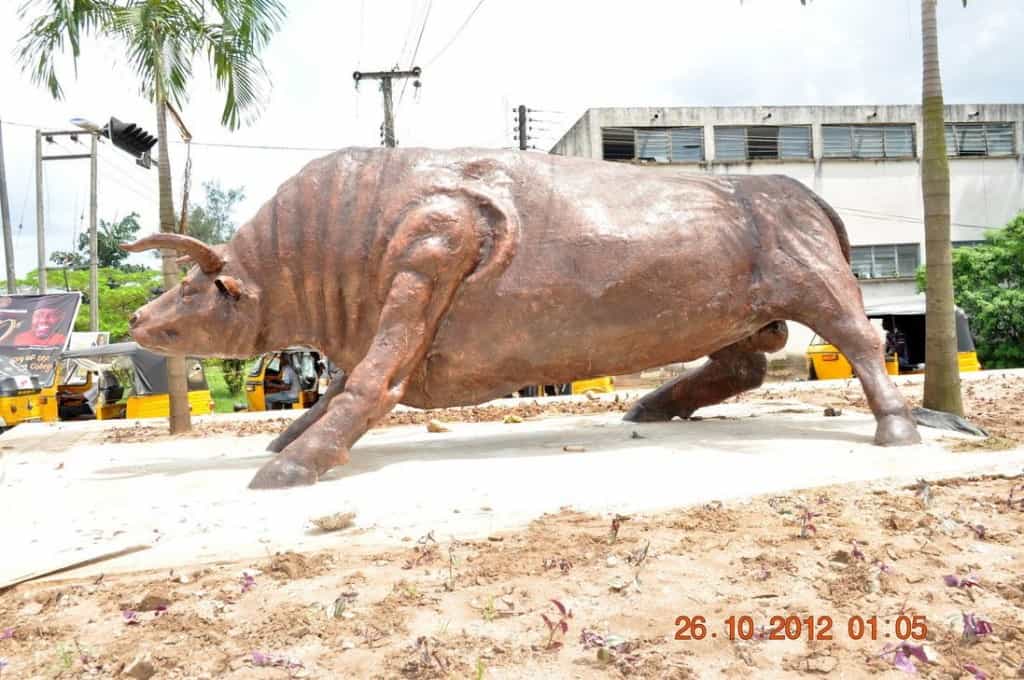 The Brazen Bull was designed in ancient Greece and featured a brass bull with a door on the side. The victim was inserted into the interior, and then a fire was lit underneath. The metal would heat up rapidly, slowly roasting those inside in agonizing pain. 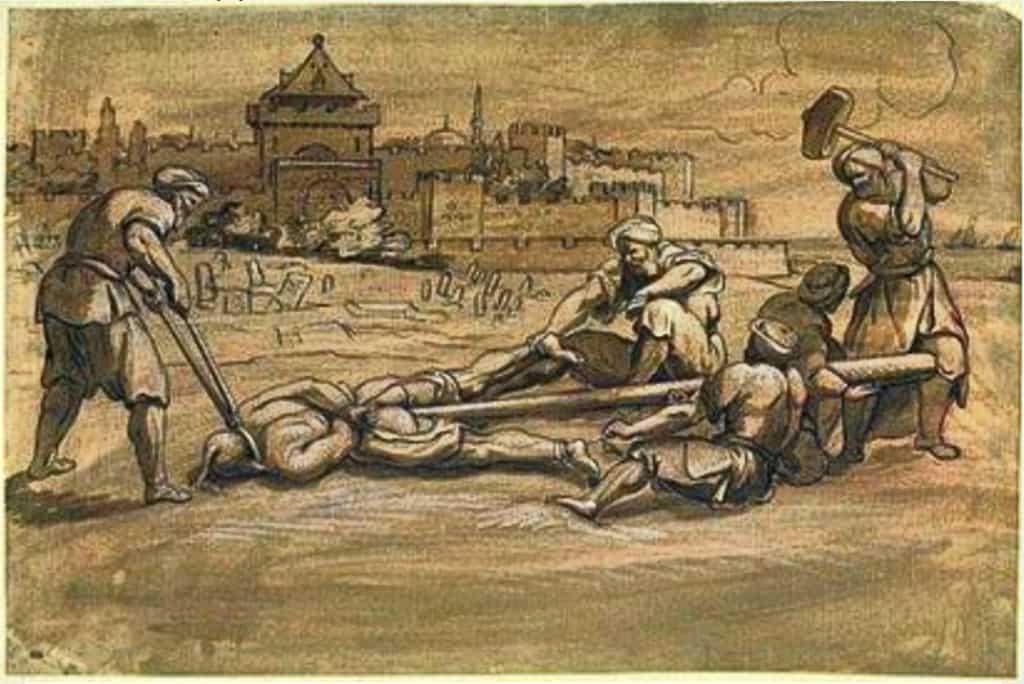 In 15th century Romania, the victim was forced to sit atop a sharp, thick pole. Their body weight forced them slowly down, impaling them from the bottom. It took some victims up to three days to die using this method. Vlad the Impaler did this to 20,000 victims. 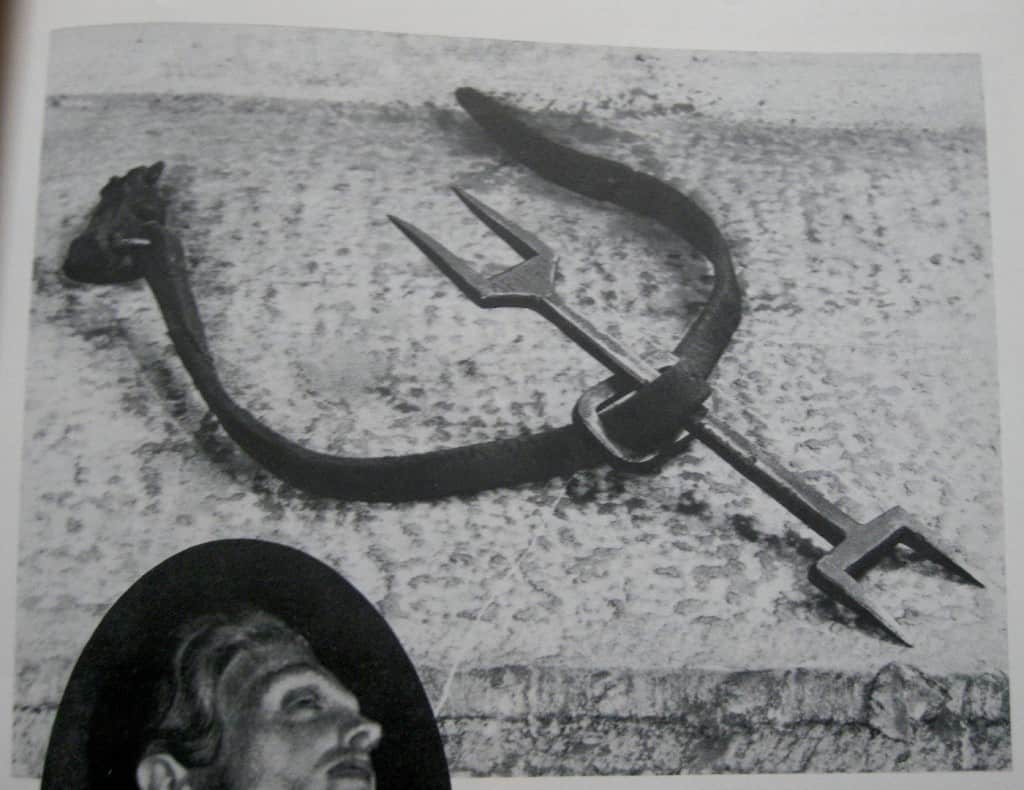 This device was a metal piece with a bi-pronged fork strapped to a belt or strap. One end was placed just under the chin, the other to the sternum. The victim would then hang from the ceiling, unable to sleep. Should their head drop, their throat and chest were impaled. 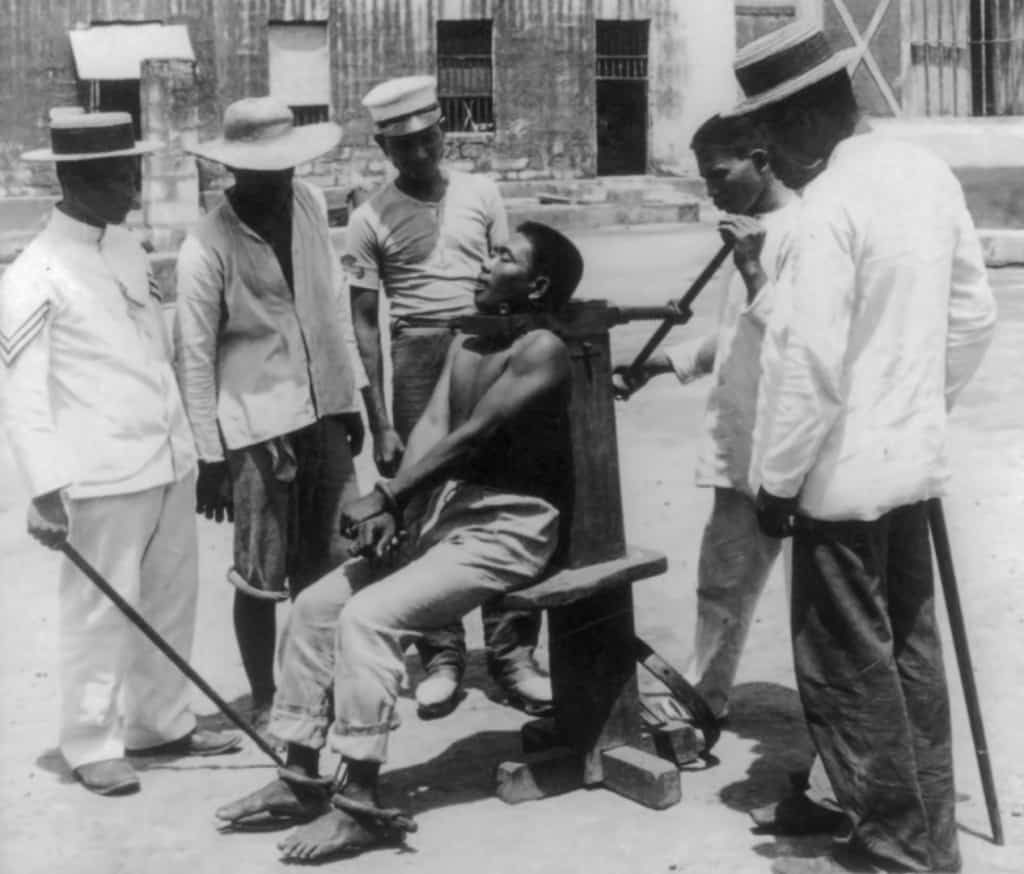 This punishment was not only painful, but also humiliating. The user wore a neck device, made of metal or wood, which prevented them from getting comfortable. The victim could not lie down, eat, or lower their head for days for fear of being skewered alive. 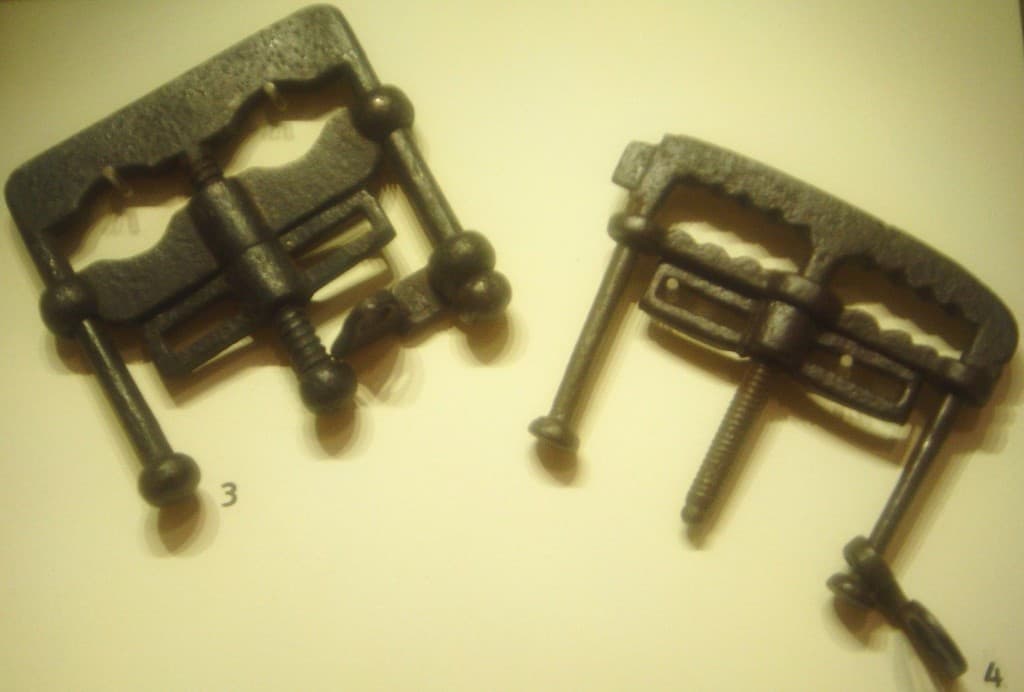 The thumbscrew was a small metal machine that, when twisted, would crush the fingers and toes slowly. It was primarily used to extract confessions during the medieval times. The pain victims endured was beyond bearable, as their nail was crushed into their skin before being flattened completely. 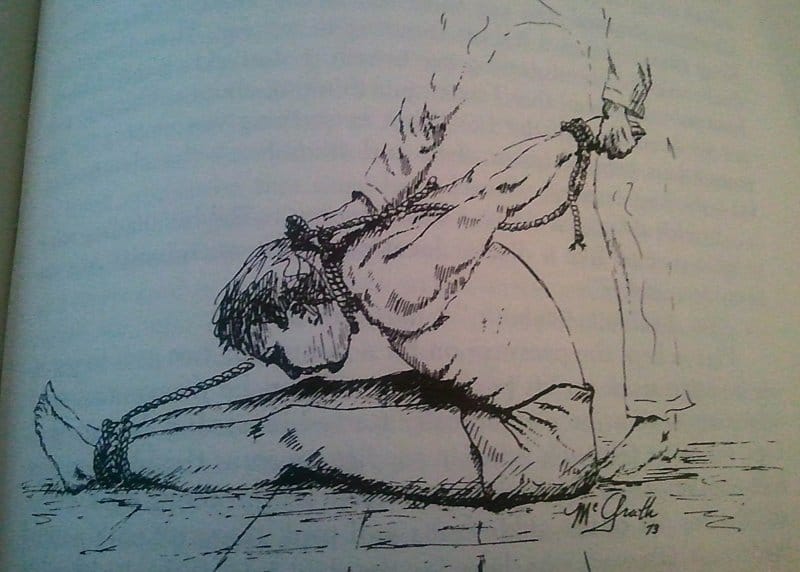 A rope is a pretty simple tool to use, so turning it into a torture device was easy. The victim could be hung from a tree, leaving them exposed to humans and animals without the ability to defend themselves. Another way they were tortured was by tying limbs to horses and forcing them to run. 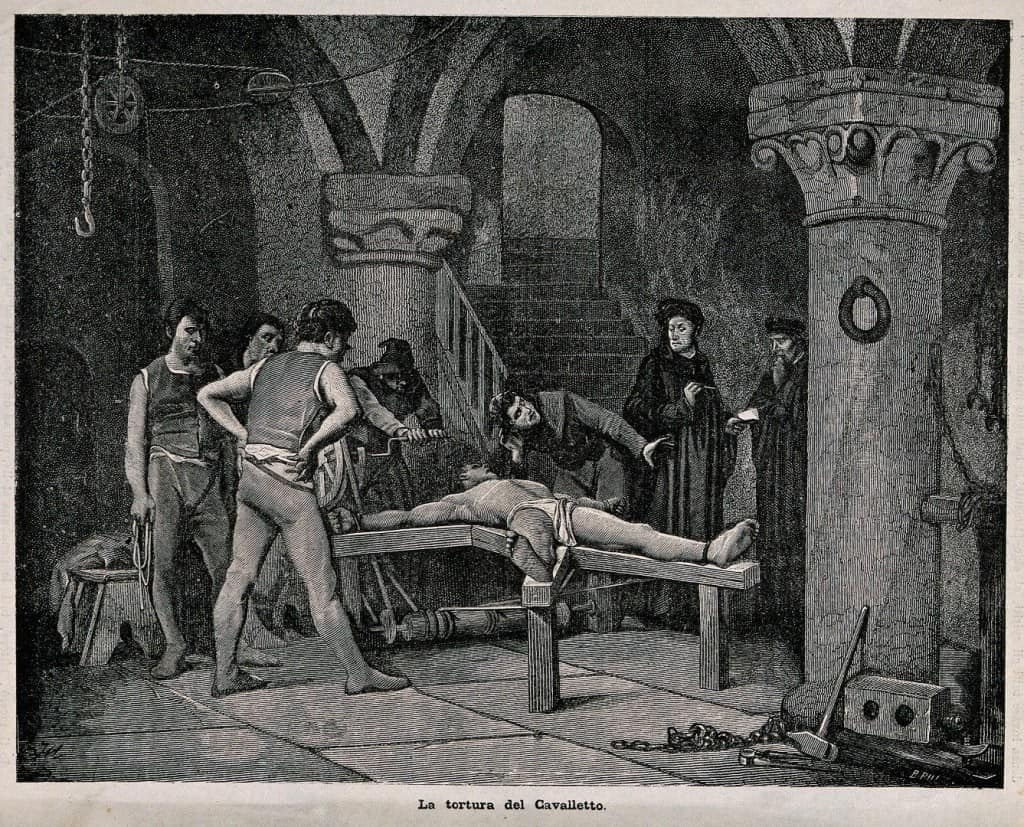 The Rack was particularly brutal. The victim was tied to either end of the wooden machine, which was then twisted to pull their body from either end, stretching them out. The pain of being ripped apart ensured many coughed up answers. 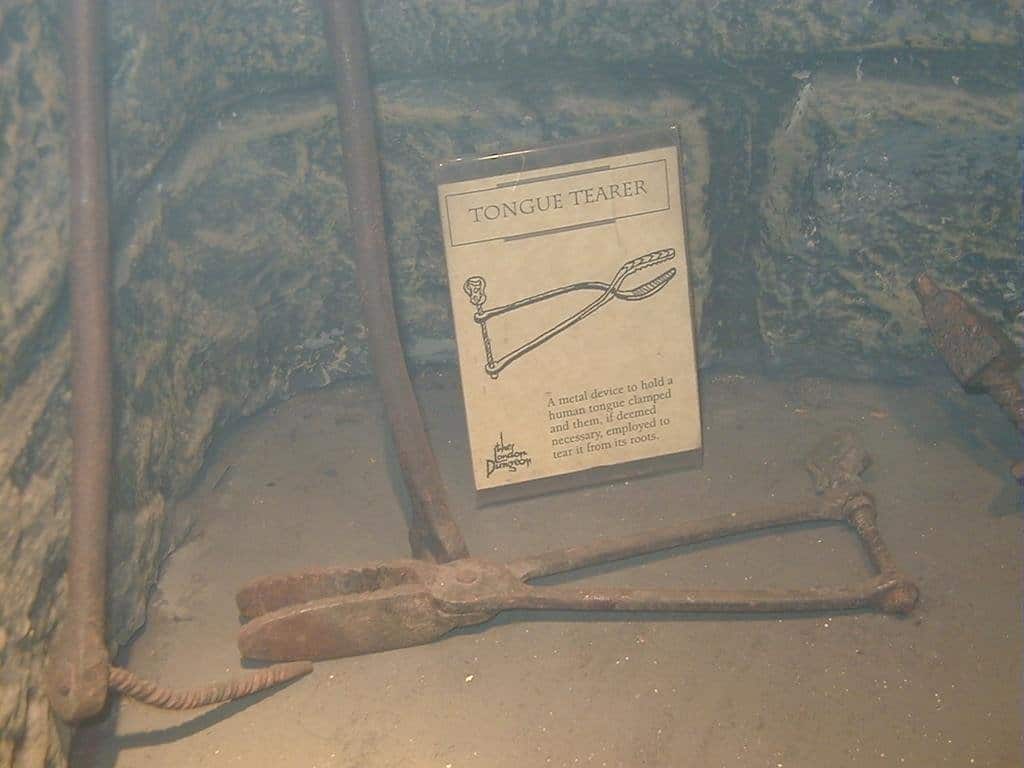 This torture device appeared similar to a pair of large scissors. They were capable of cutting the tongue from a victim with ease. The mouth would be forced open, and the iron tongue tearer would grip the tongue uncomfortably. Once tightened at the end, the tearer would rip the tongue out. 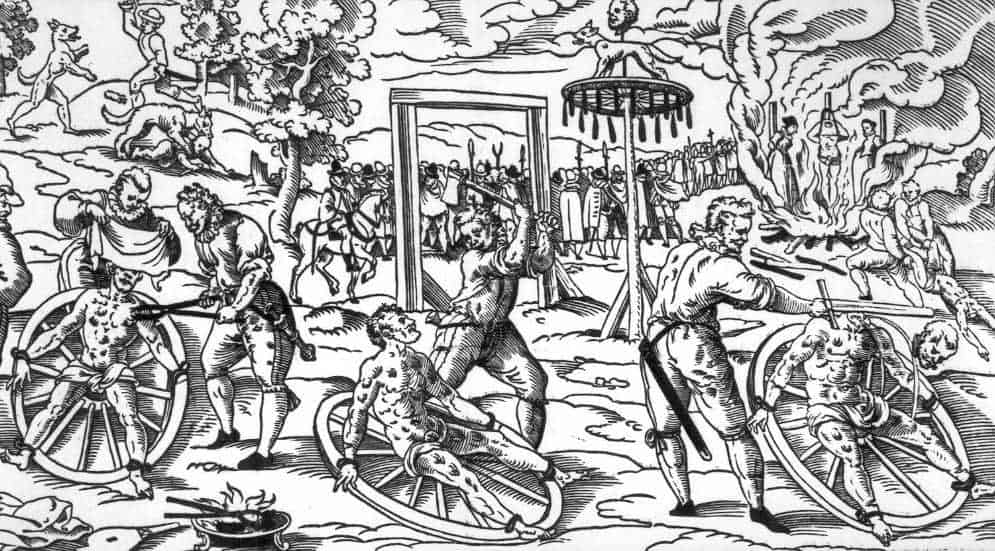 This was also known as the Catherine Wheel, and was a slow way to die. The victim was tied to the spokes of a large, wooden wheel, which would slowly revolve, while their limbs were smashed with an iron hammer. They were left atop a pole for birds to feast upon their body afterwards. The Spanish Donkey was used especially during the Spanish Inquisition. It’s pretty horrifying. The victim was stripped naked and forced to straddle the wooden device, which had sharp spikes embedded in it. Weights were added to the victim’s feet, forcing them down upon the spikes. 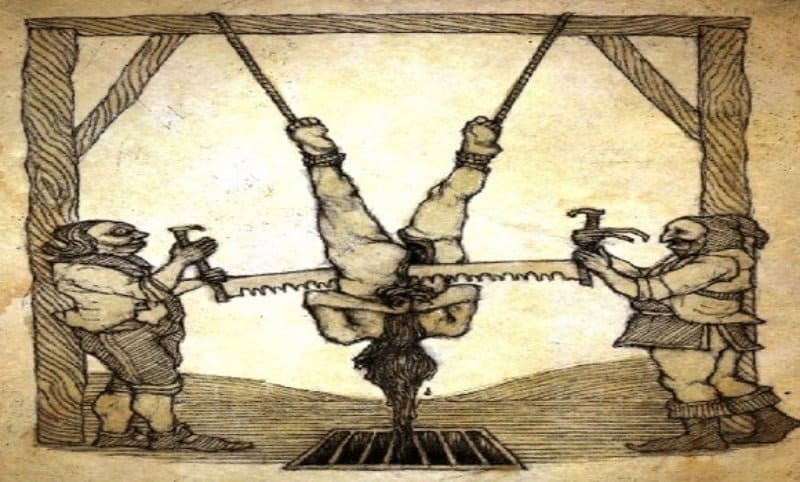 The victim was hung upside down so all of their blood drained to their head, keeping them conscious while the torture commenced. A saw was then run through their body from the top until they are nearly sawed in half. Most were cut to the abdomen to prolong the pain. 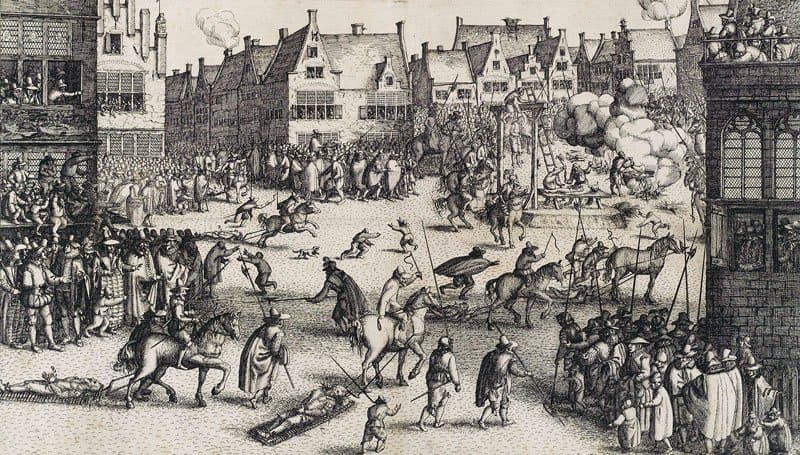 The penalty for treason in England during medieval times was to be hanged, drawn and quartered in public. This means the victim was hung by the neck for a short period of time, then disemboweled and castrated, with their entrails and genitals burned before them, before being divided into four separate pieces and beheaded. 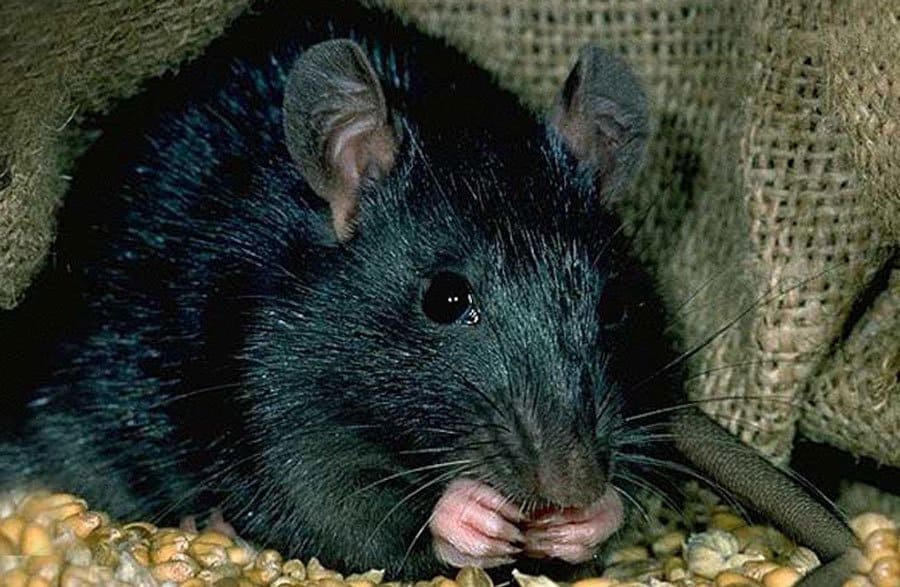 Rats were starved for a long period of time, and then put inside a bucket, which was heated on the top, so they were forced downwards. The only way to go, though, was through the body the bucket happened to be laying over. The victim was literally eaten by rats trying to escape the heat. 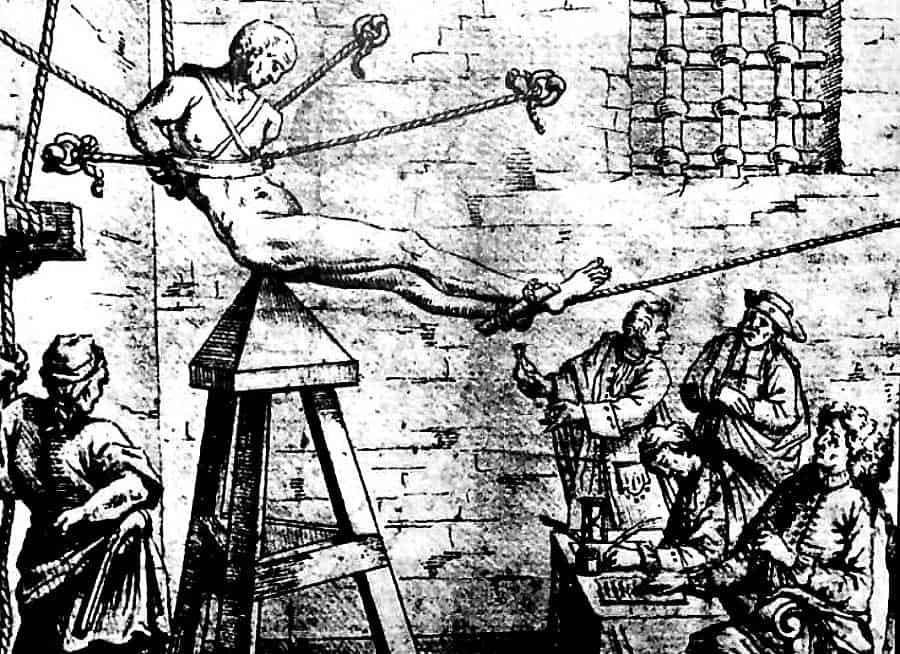 The victim was strapped to the chair with leather around the back, arms, and feet, forcing them onto a chair layered with anywhere from 500 to 1,500 spikes. The iron spikes would impale through the skin of the victim, bleeding them out. 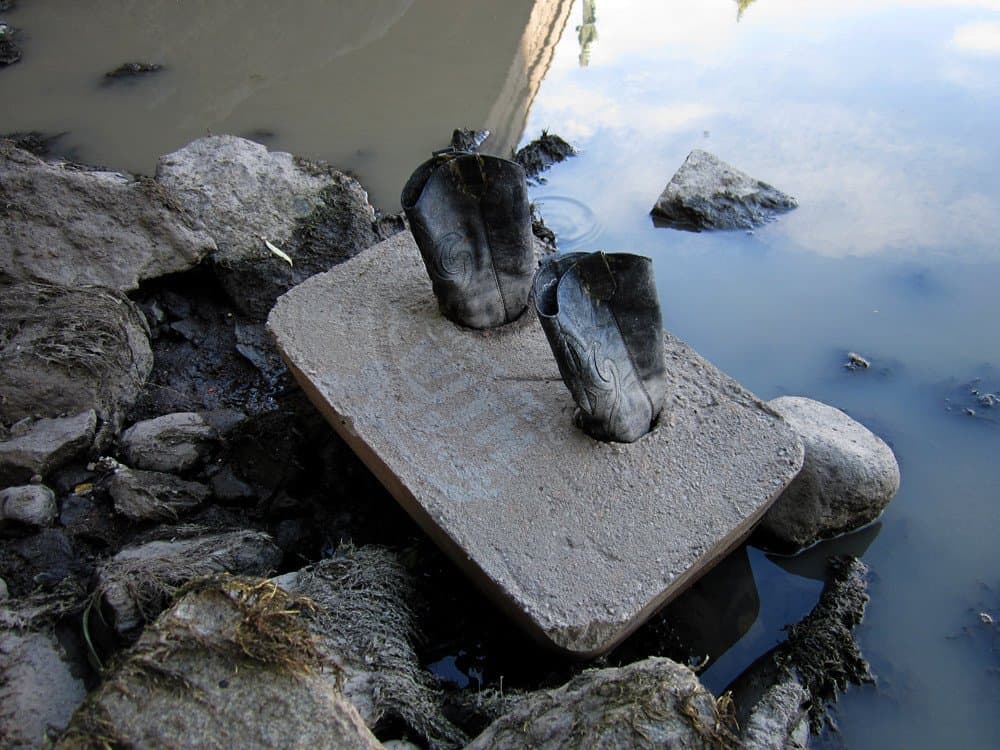 Cement shoes were often used by the American Mafia when they wanted information or to execute someone. The victim’s shoes were placed inside cinder blocks, then filled with wet cement. They were then tossed into deep water to drown. 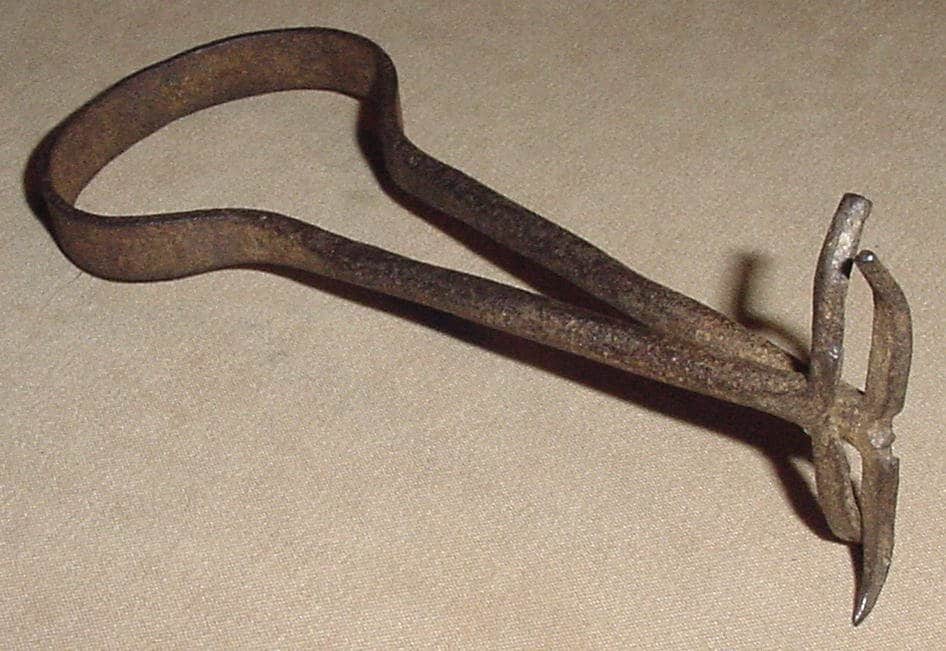 This torture device was made specifically for women. The breast ripper caused major blood loss due to the claws, which were red hot generally, and placed on exposed breasts. The spikes penetrated the skin and were then pulled or jerked, causing large pieces of flesh to rip clean off. 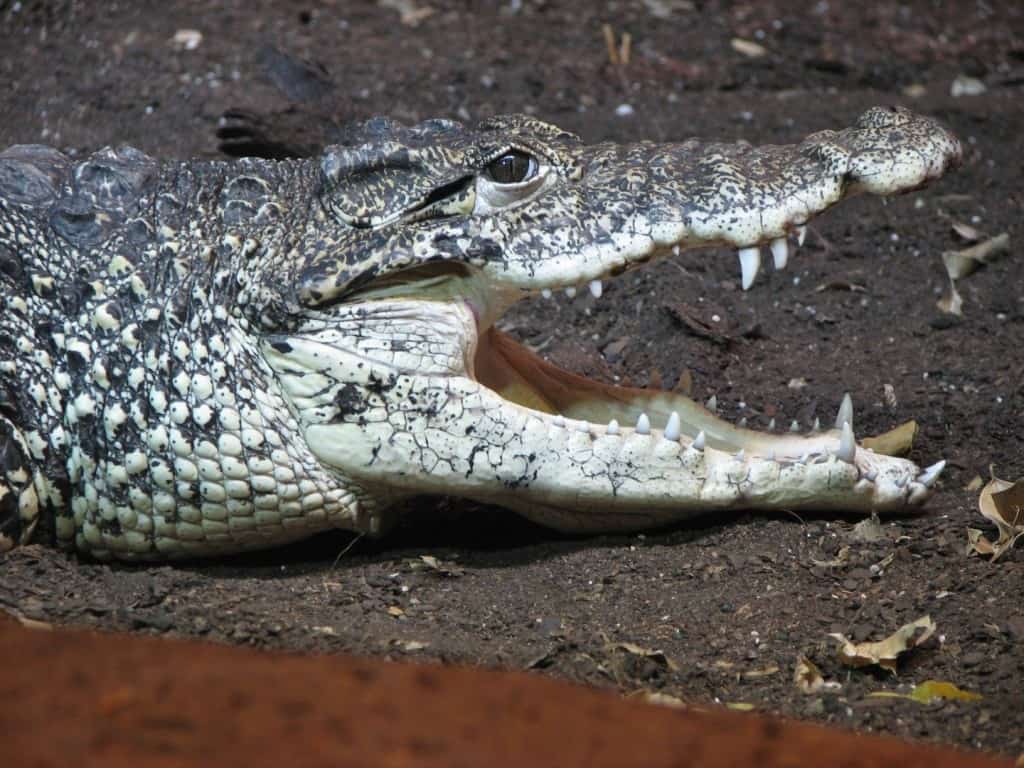 Crocodile shears was the device used by torturers when someone attempted to kill the king. The shears were heated until red-hot, then clamped down upon a victim’s appendages, which were then torn from their body. 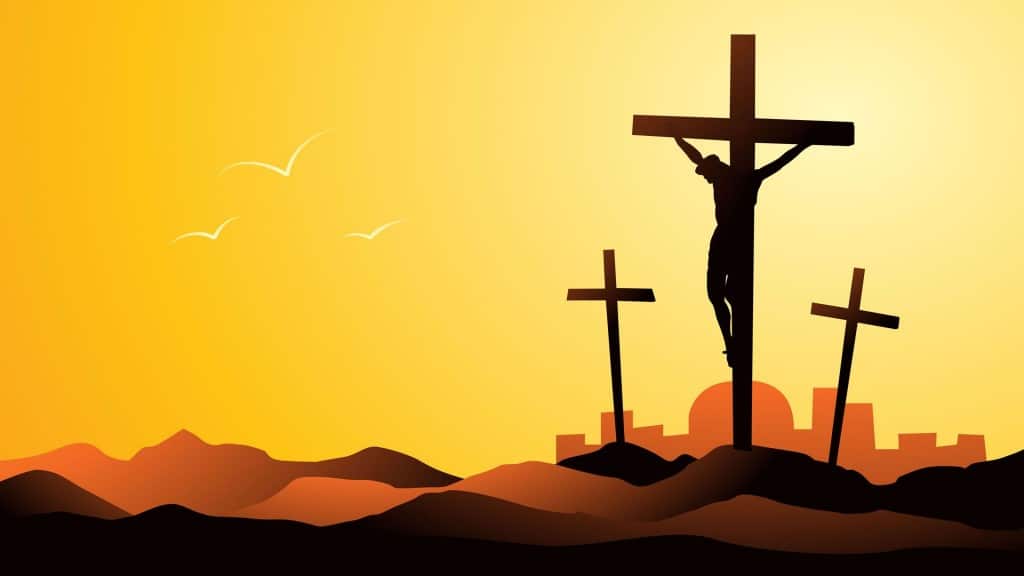 Crucifixion was a well-known method of torture and execution. The victim is nailed or tied to a wooden cross and left to die — which usually takes days. 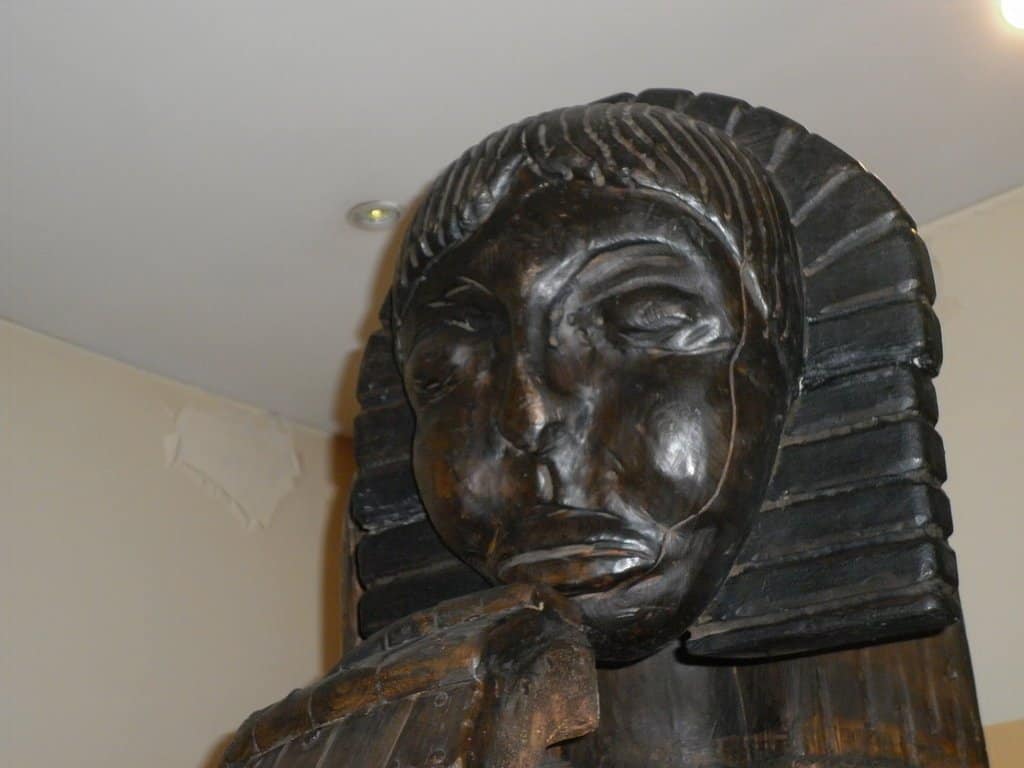 The Iron Maiden consisted of a large iron cabinet with a swinging front door. The entire inside was covered with spikes, with just enough room for a human being. The person was incapable of moving for fear of being impaled in the dark.