20 Of The Funniest Dad Texts Ever Sent

With Father’s Day happening this weekend, we thought it would be a great idea to compile some of the best Dad Texts ever sent. With the advancement of technology, even our parents are using smartphones and trying their best to send text messages. Sometimes they fail, but sometimes they nail it and their kids don’t even know how to react to it. Of course, autocorrect has a lot to do with some of the errors, but sometimes your father is just witty and sarcastic. Check out 20 of the funniest Dad Texts ever sent right here! 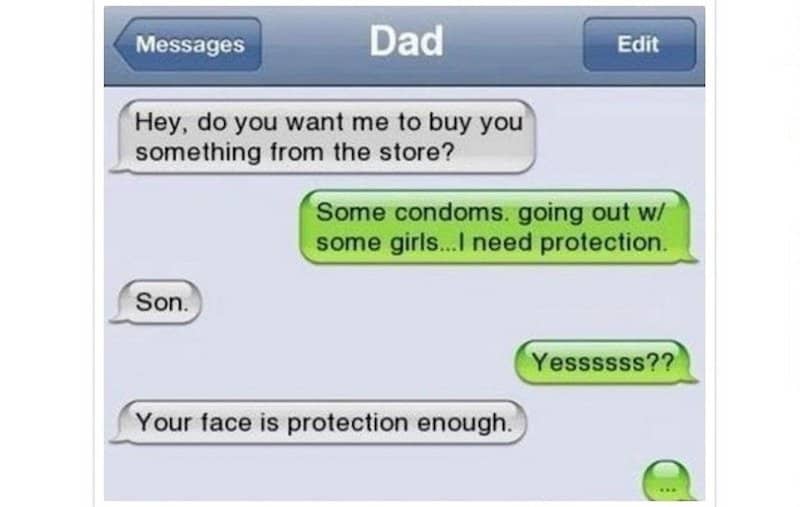 You can’t blame this father for keeping it real. The son wants condoms, but apparently his face is protection enough. Too funny! 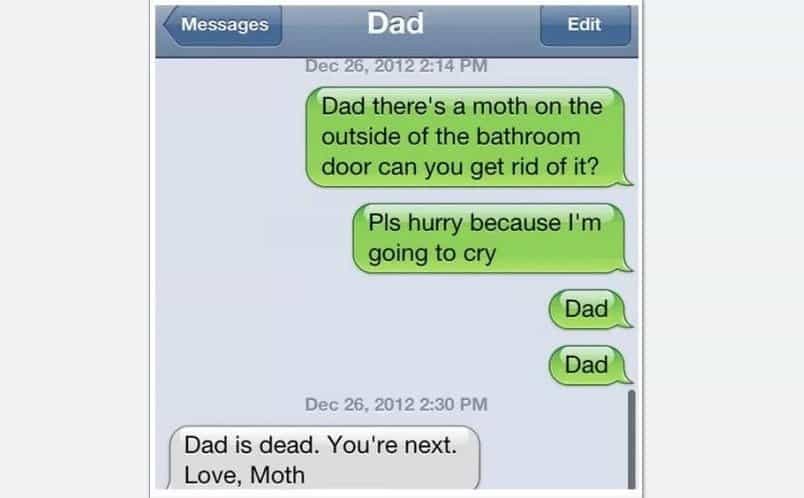 Why is someone so afraid of a moth? They aren’t even scary, but this person was and it looks like the moth came and killed dad! Maybe we should be afraid of moths? 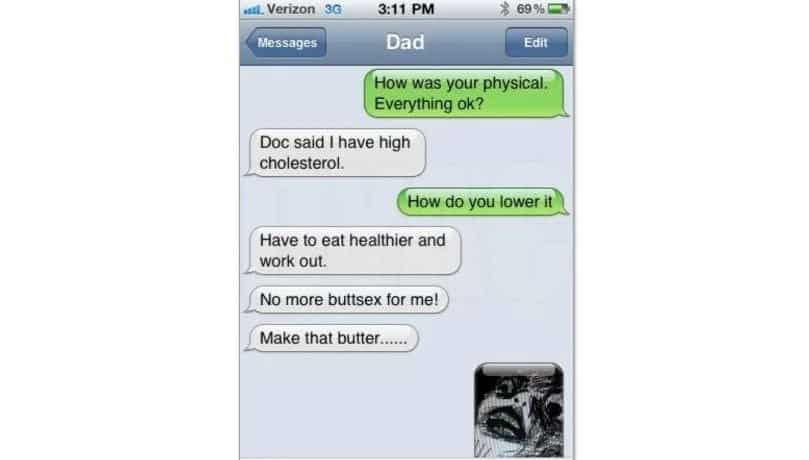 If you have high cholesterol, it is best for you to cut out butter in your life, but it looks like this father was told no more butt sex! Sometimes autocorrect is the best thing ever invented. 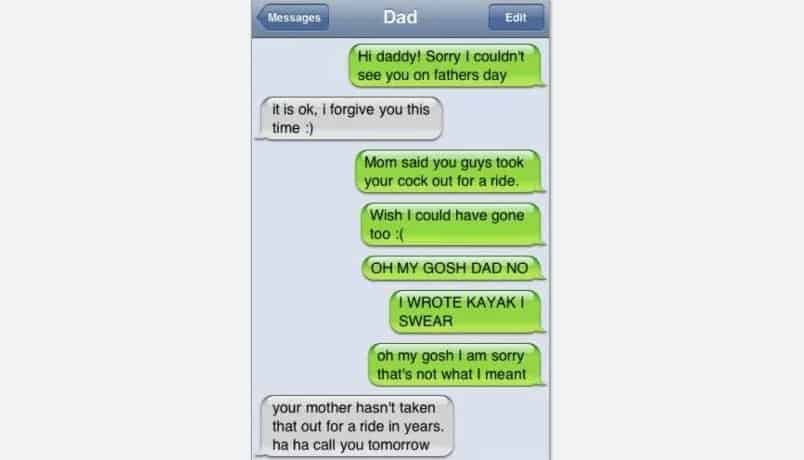 However, autocorrect can also be the worst thing ever invented. This person was just trying to wish their dad a Happy Father’s Day and see how kayaking went, but it seems like their phone had other things on it’s mind! The response from the father is priceless. 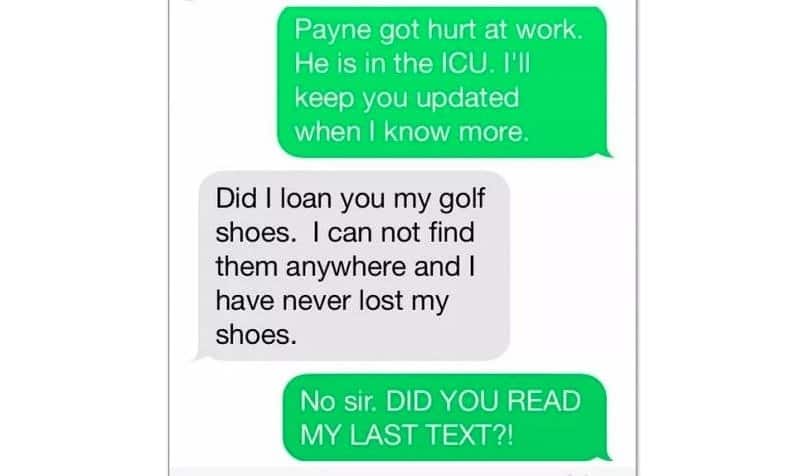 Payne doesn’t matter when Dad is looking for his golf shoes! He completely overlooks the text about Payne being in the ICU, as his golf game is more important. 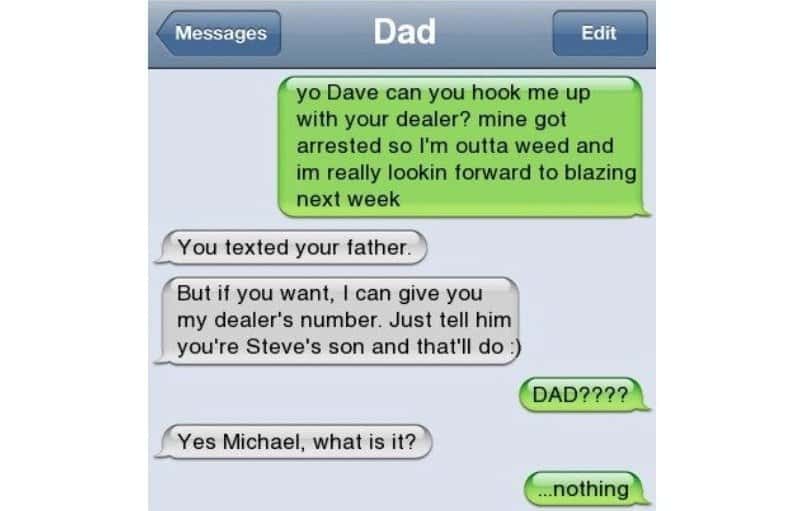 If you are going to text your friend about getting you weed, maybe you should verify that Dave is getting the text and not your dad! However, it looks like dad can hook you up with a dealer faster than Dave can. 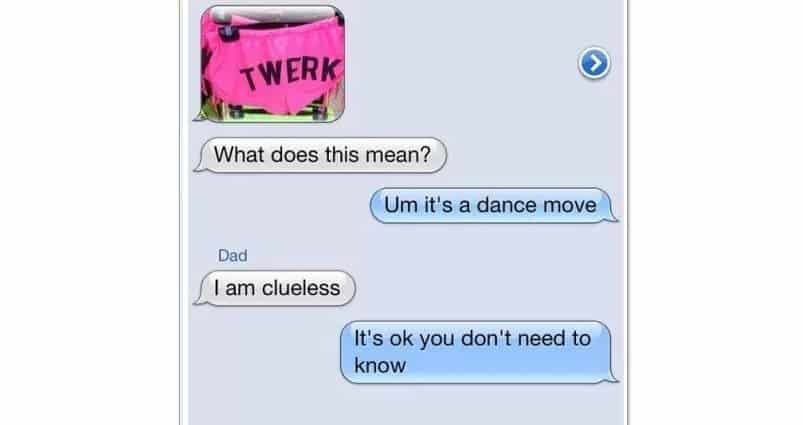 Believe us when we say this, but we are still clueless when it comes to twerking also. We are not sure how it is a thing, but thanks a lot for that Miley Cyrus. 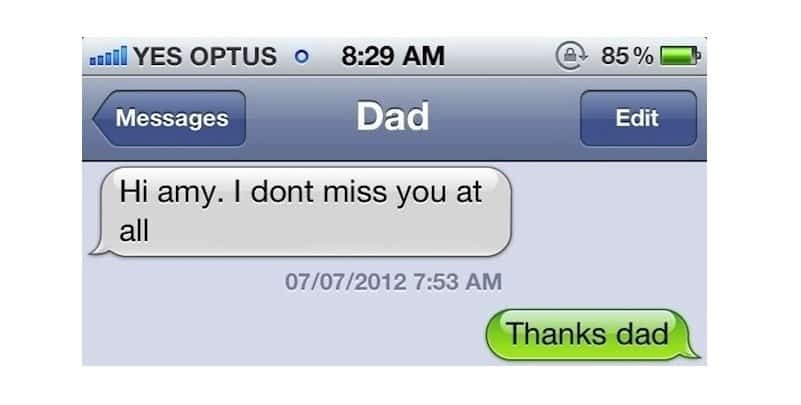 Sometimes we get homesick and miss our parents and family. This father just wanted to remind his daughter that he does not miss her at all. Such a sweet text! 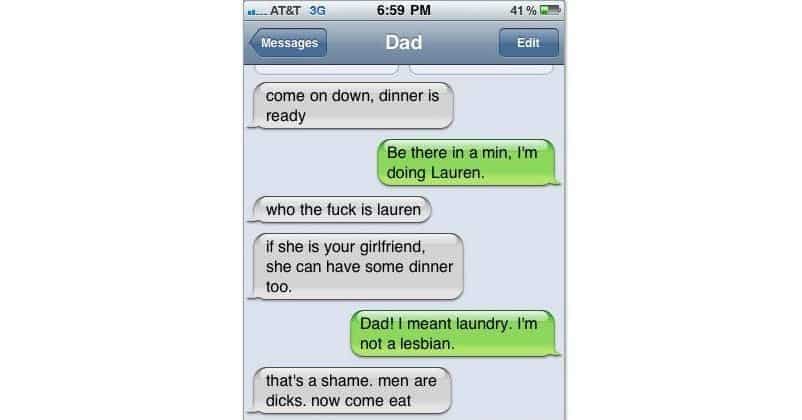 If this girl happened to be a lesbian, how comforting to know that her father would be accepting of it. That is not the case, but props to dad for just wanting to eat dinner and not worrying about the possible girlfriend. 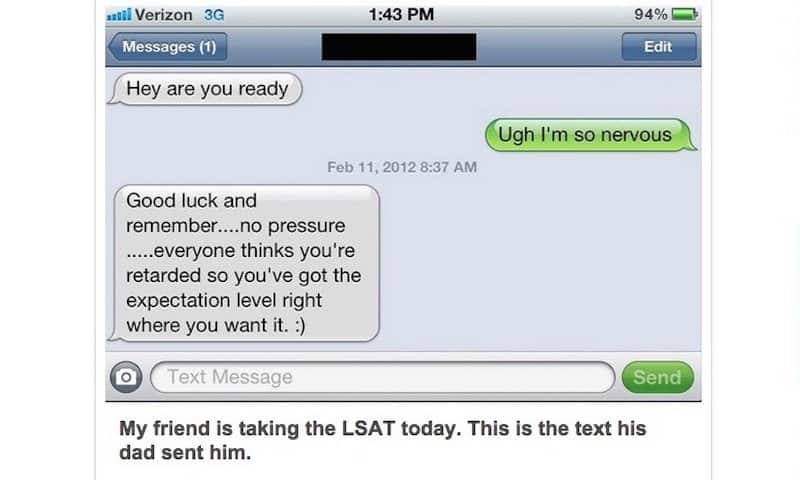 If we got this text right before taking the LSAT, it may mess with our mind a little bit. When your dad doesn’t even have faith in you, then who does? 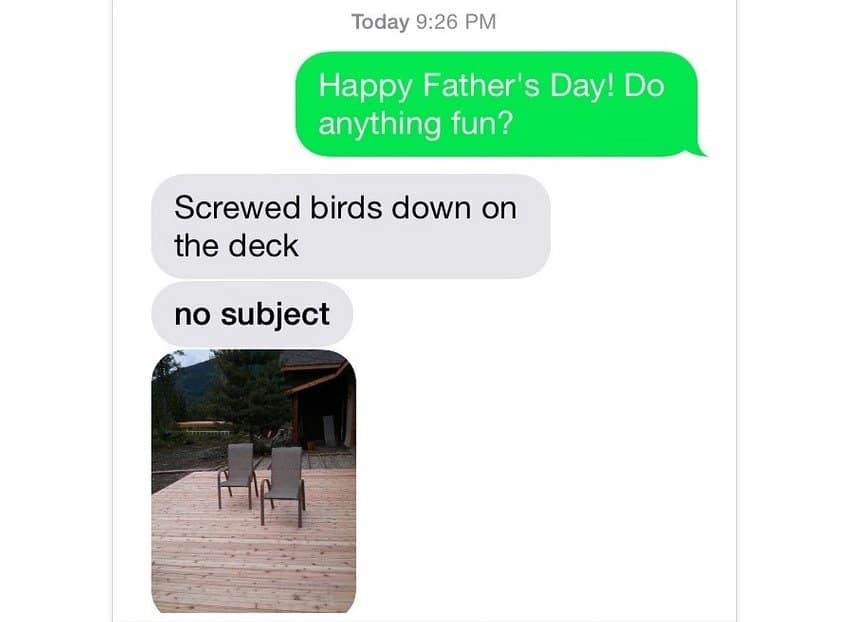 Attack of the autocorrect again, otherwise those are some very big birds! We don’t think they screwed any birds down on the deck though, but they did get some work done on that deck. 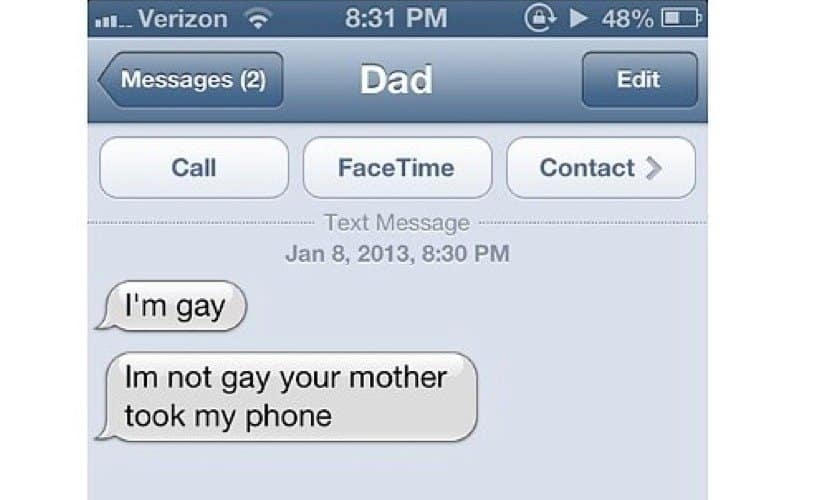 This one wasn’t particularly from Dad, but it was from his phone! It looks like Mom was getting in on the jokes too, as she tries to out the father through a text message. This is why you should have a passcode on your phone. 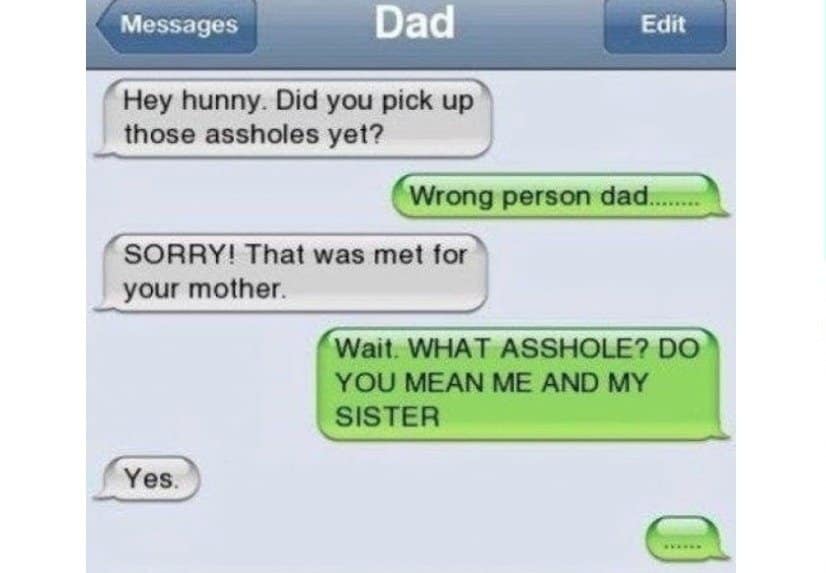 We all tend to say mean things about people behind their backs, but it’s usually not family members, and we tend to make sure we don’t send the message to the ones we’re b*tching about. 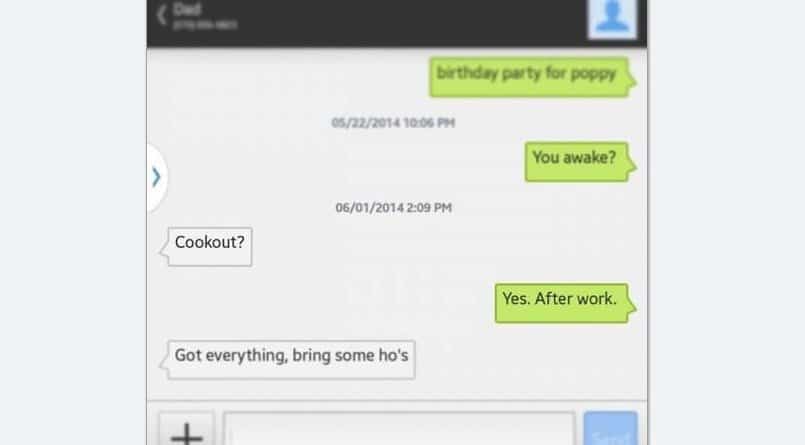 There is nothing like your father wanting you to “bring some ho’s” for the cookout! Maybe it was a very short abbreviation for hot dogs? 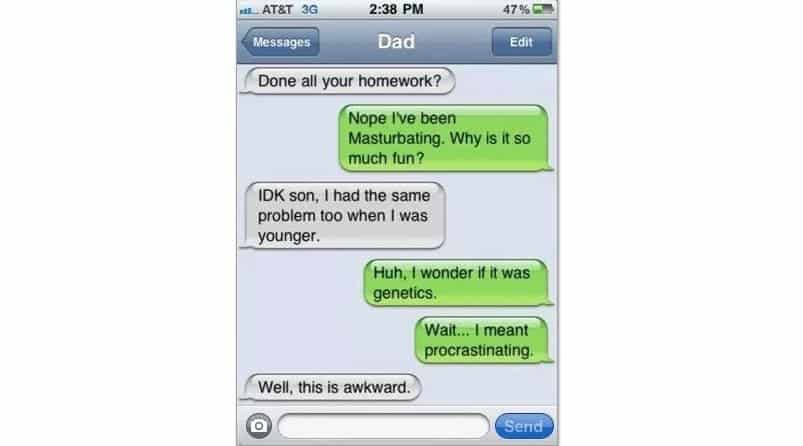 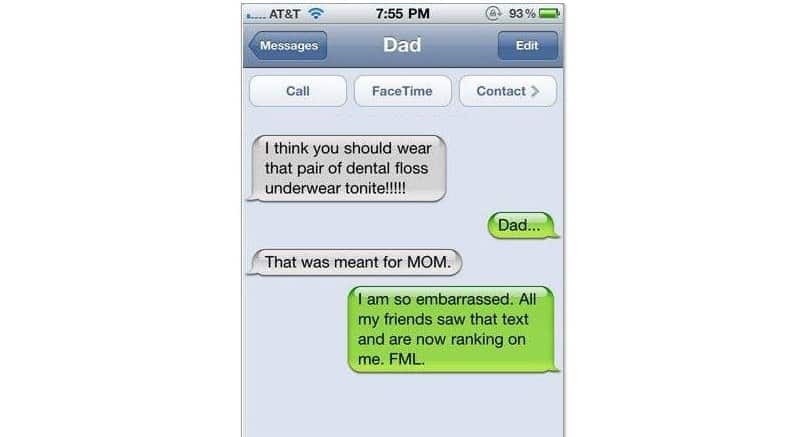 You should never let your friends read your texts from your parents, especially when dad sends a text meant for your mom! At least your parents are still in love and getting it on. 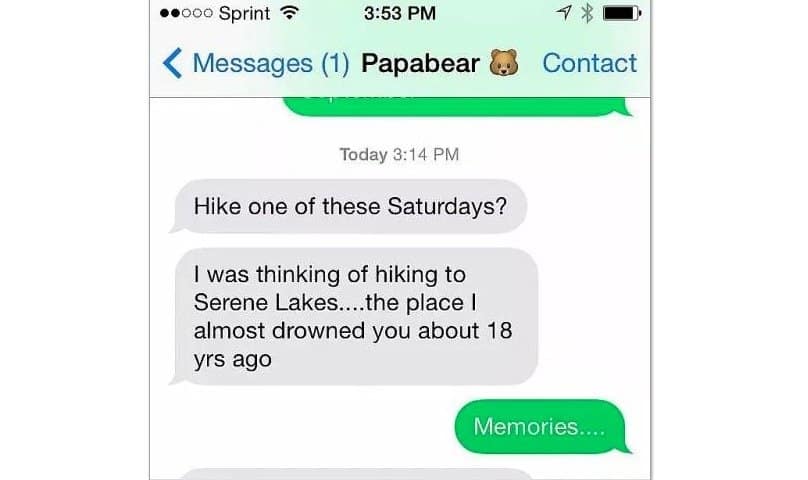 This father wants to relive some old memories, so why not take a hike to the place where he almost drowned you 18 years ago? If we were his child, we would be turning down that invitation! 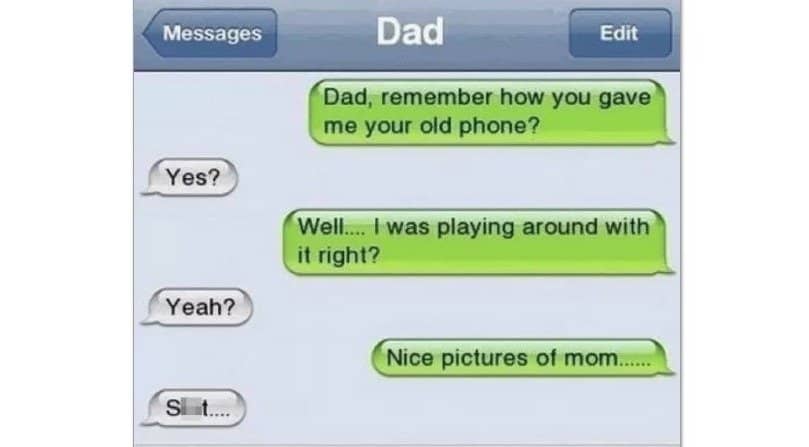 Word to the wise: if you are going to give your old phone to your child for them to use, then you should probably go through and delete all the photos on there. No child wants to see that stuff! 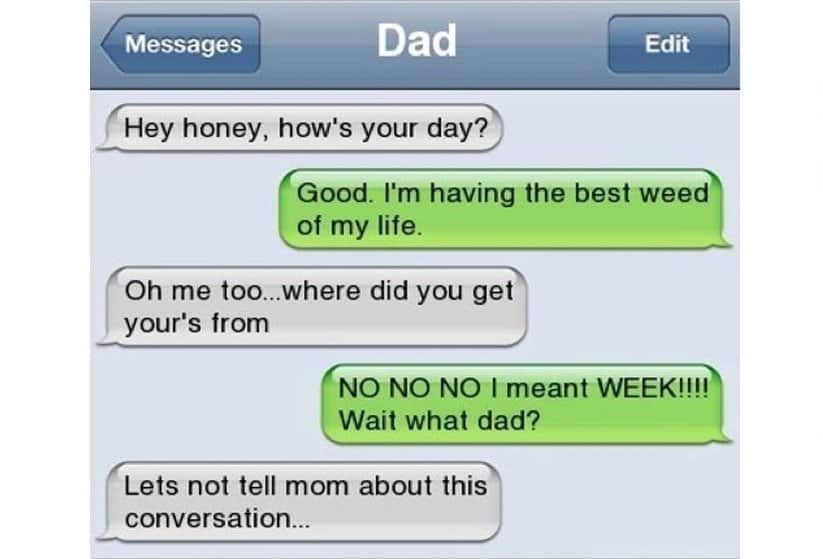 The child was having the best week ever, but the dad definitely seems excited about this “weed” she had. We doubt this conversation didn’t make its way to her mother. 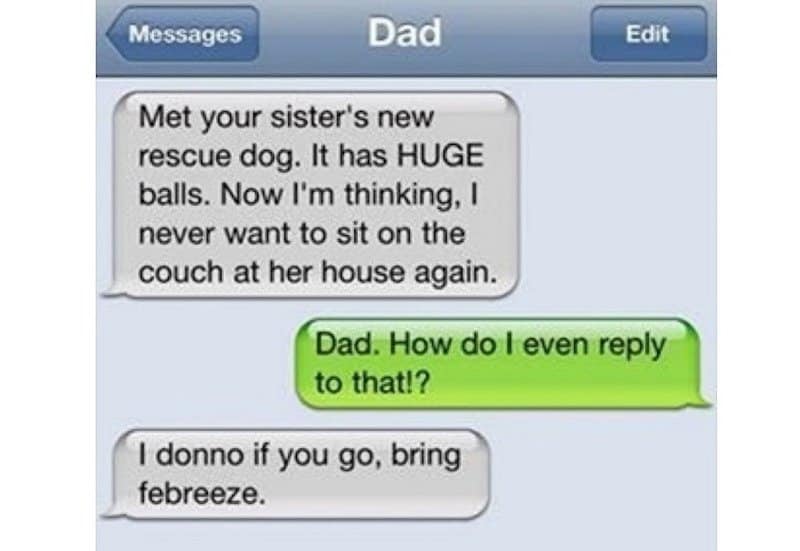 This father seems to be obsessed with the huge balls the dog had. It can happen, but why send a text message to your other daughter to talk about it?