Nicki Minaj caused quite a stir when she burst onto the scene a few years ago. But it wasn’t just her controversial lyrics that made heads turn; it had a lot to do with her fashion as well. The female rapper decided to take a different route than her counterparts, opting instead for wacky outfits and crazy wigs while still highlighting her much talked about assets. Although her fashion has now taken a different turn, let us look back at some of Nicki Minaj’s wackiest outfits. 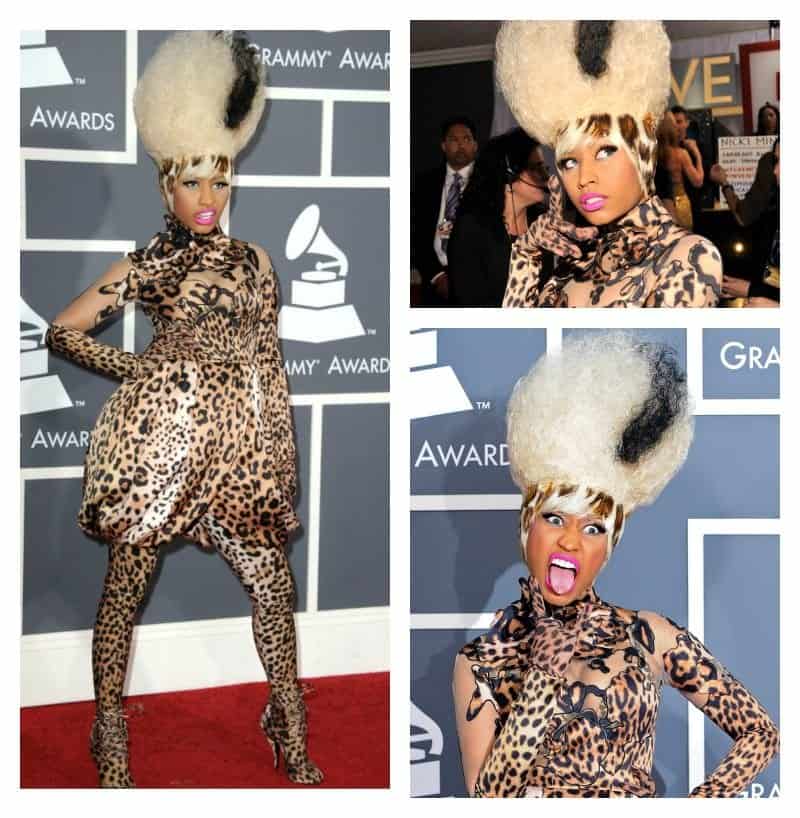 This outfit certainly garnered attention at the Grammy awards. From the crazy head-to-toe leopard print to the Mrs Frankenstein hair. 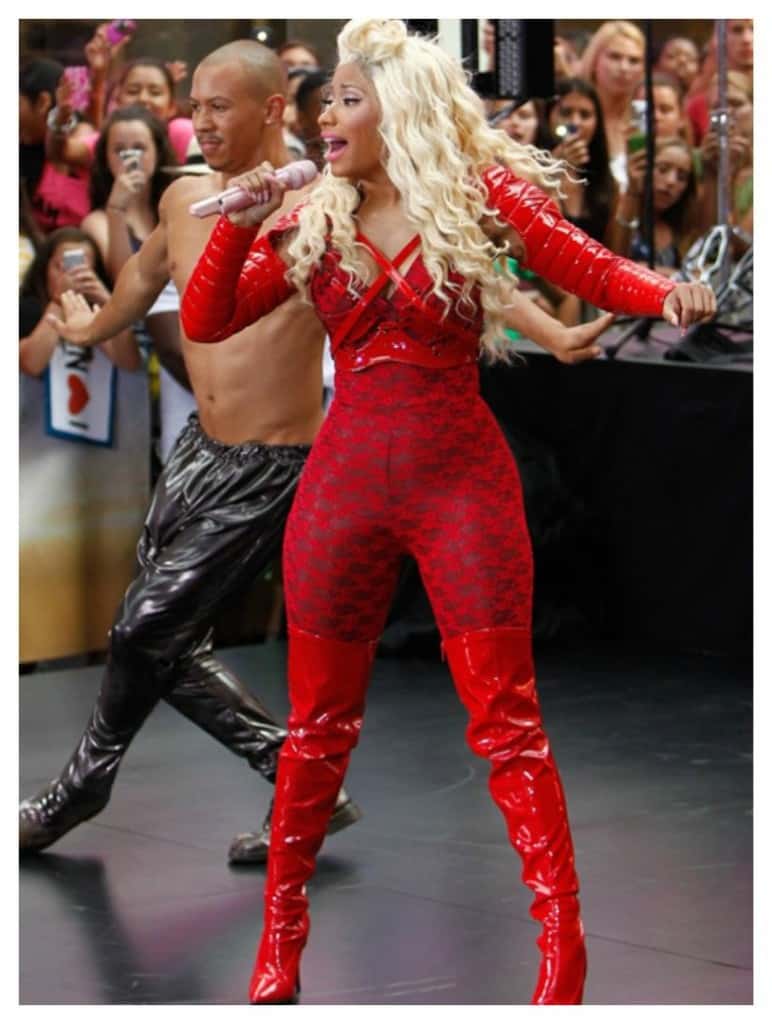 During a performance, the rapper wore a full red ensemble with strappy leather details and thigh high red boots. 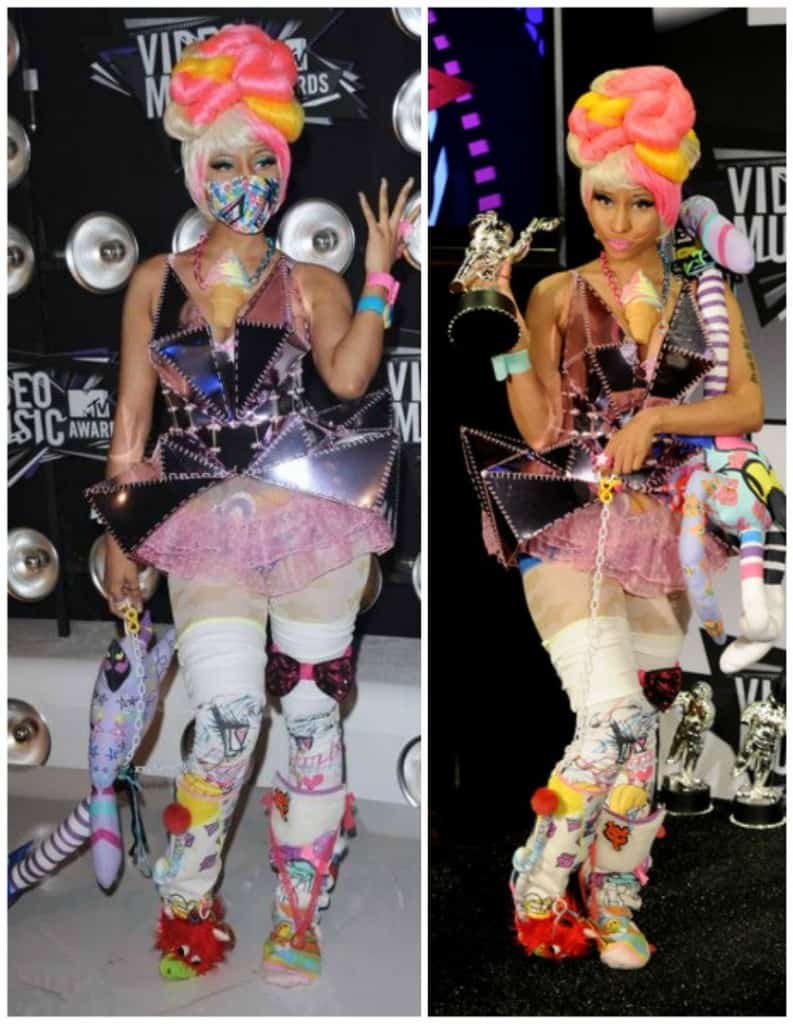 I guess she couldn’t decide on one theme so she went with several. A sparkling metallic bodysuit, matching dust mask, ruffled underwear, ice cream necklace, and cartoon socks with teddy bear in hand. Wow! 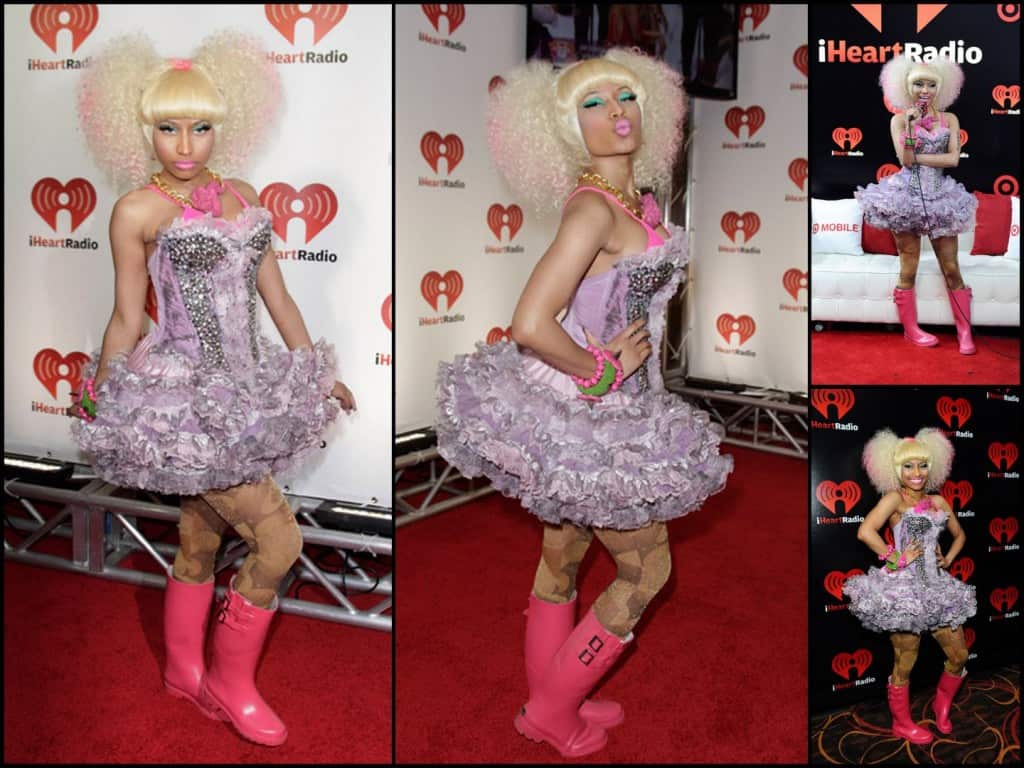 Looking like someone straight out of a ‘little miss’ pageant, the star went with a glittery tutu mini dress paired with pink water boots and blond puffy pigtails. 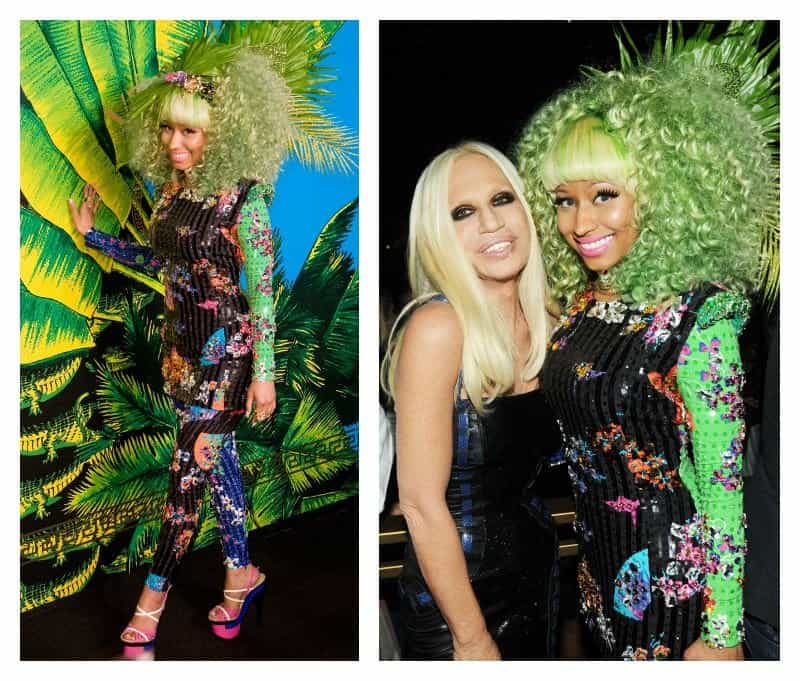 Donatella Versace created this colorful ensemble for the rapper, which she wore to an event held by the brand. She topped off the outfit with sky high heels and a curly green wig. 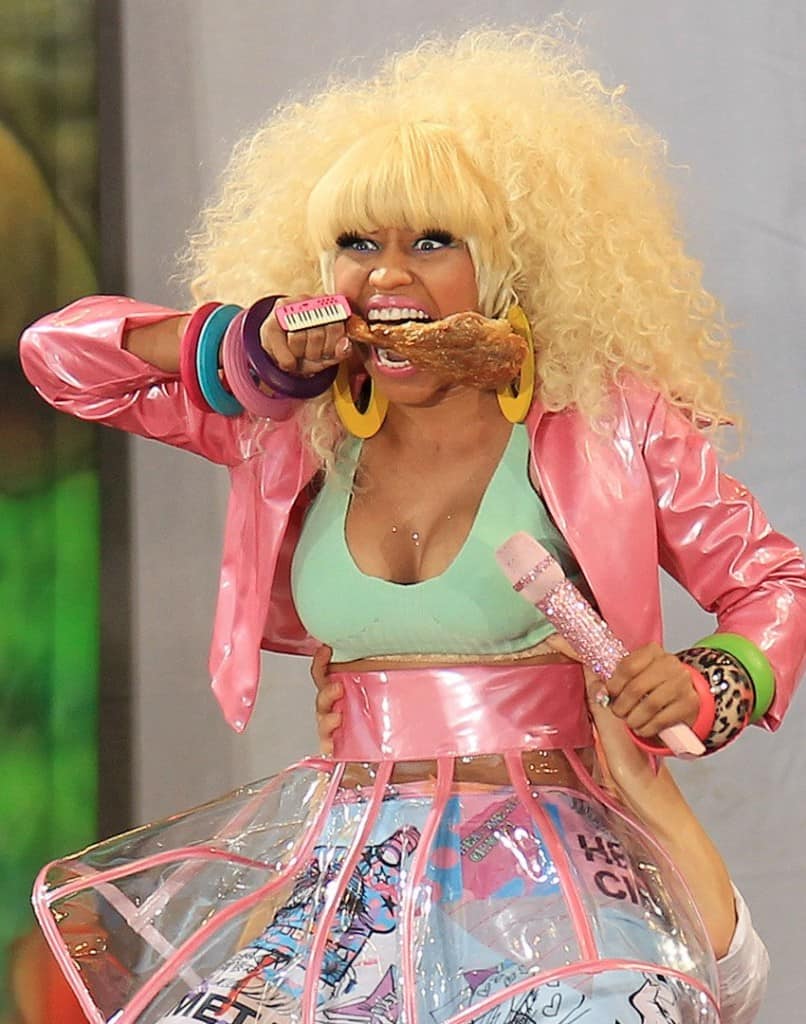 I’m not sure where to begin with this one so let’s just focus on the huge chicken leg, over-sized bangles and transparent skirt which seems to be made from plastic. 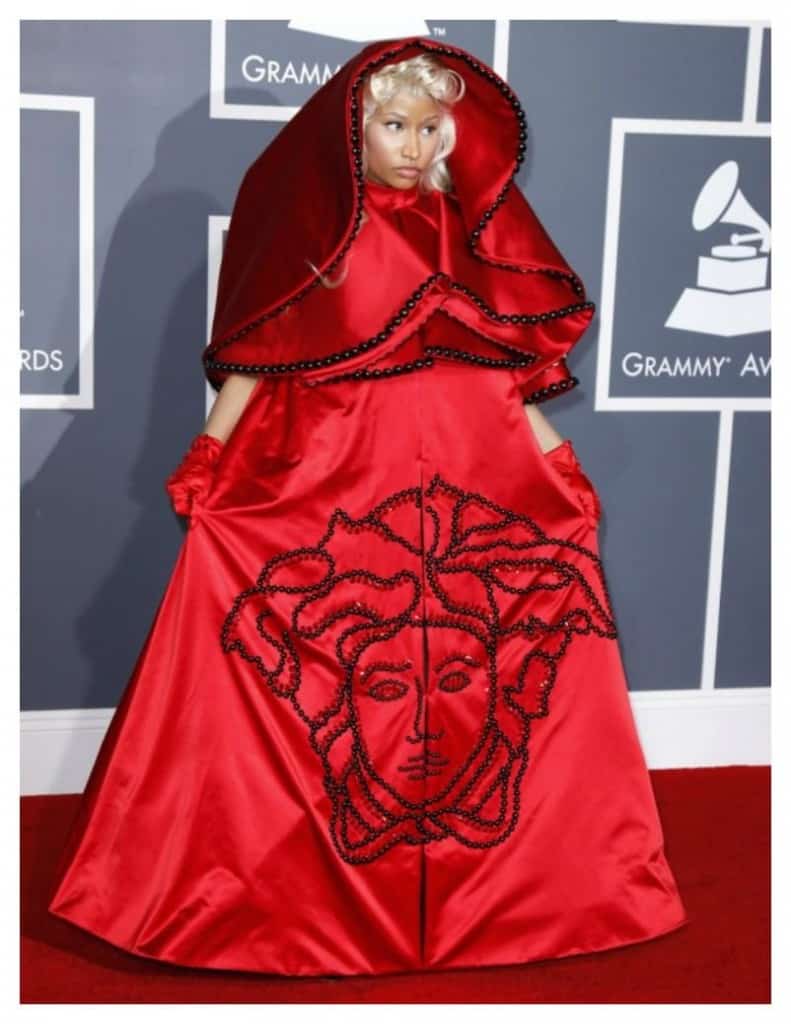 Taking a somewhat dramatic turn from her rainbow colored outfits, Nicki shocked everyone at the Grammy Awards when she showed up in this head-turning, Pope inspired outfit. 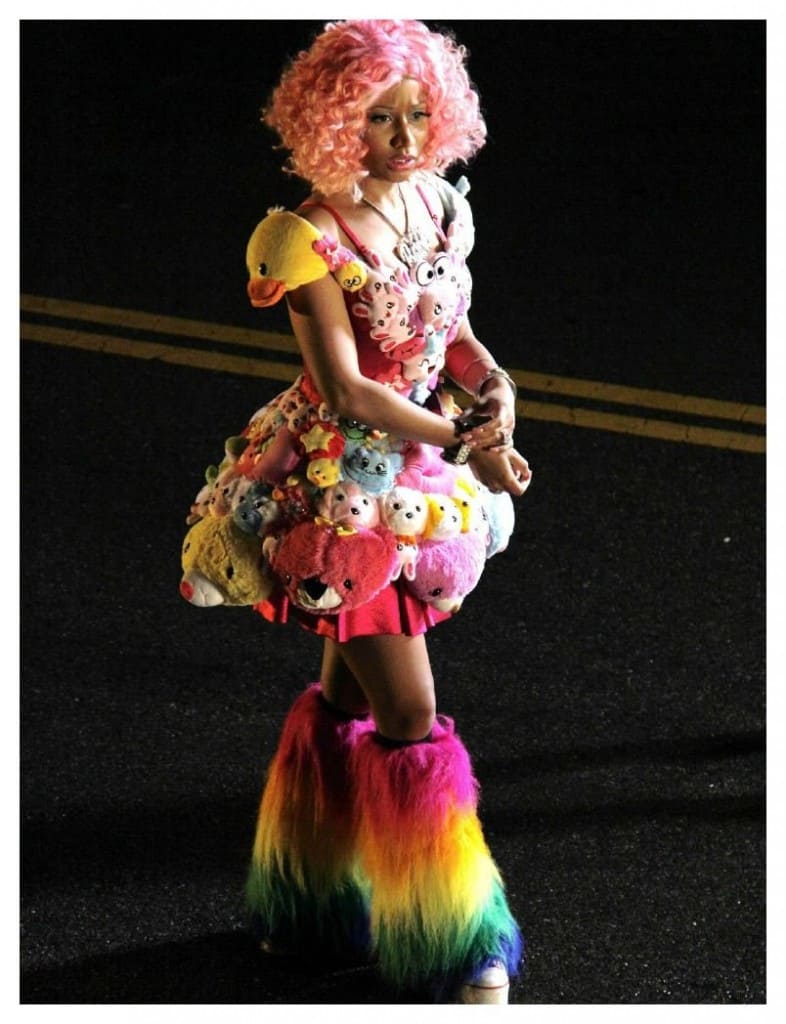 Clearly a throwback to her childhood days, the rapper wore a dress made out of teddy bears with fluffy shoes while on set for a music video. 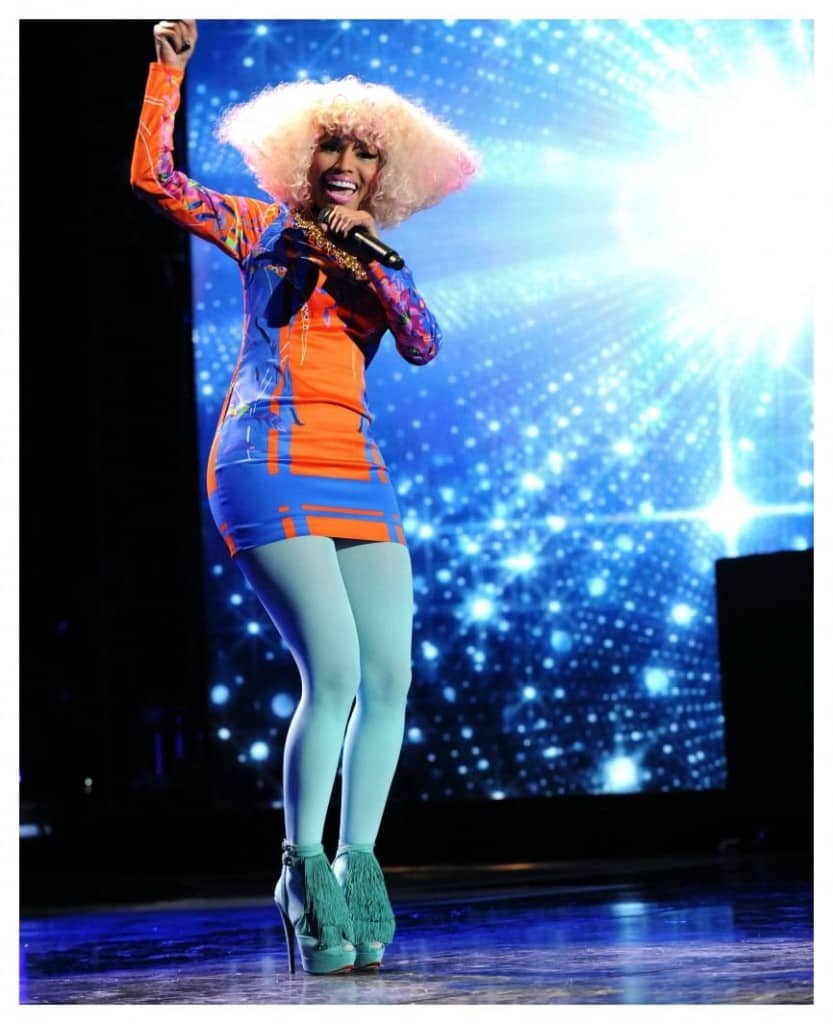 Compared to her other outfits, this one looks quite normal; but compared to the rest of the world it really isn’t. The brightly colored mini dress paired with blue stocking and blue shoes might be okay if it wasn’t for the triangular-shaped blond wig. 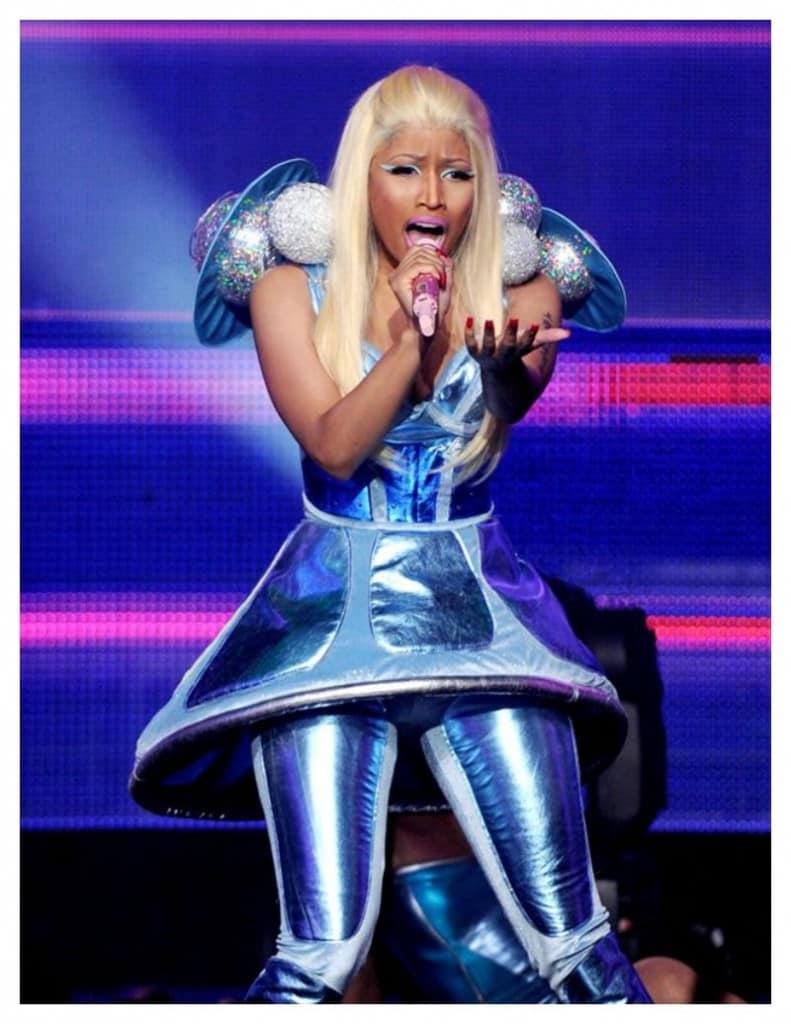 This outfit looks as if it was snatched straight from a Jetson’s episode; but I guess the once popular cartoon was her inspiration. 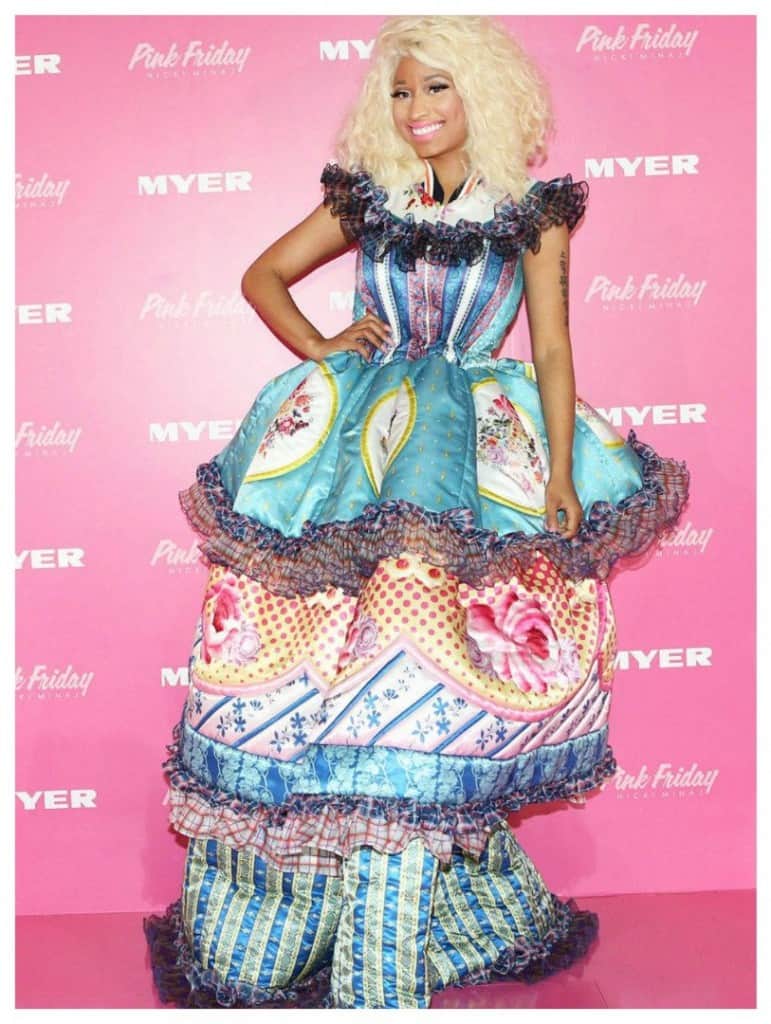 Definitely a play on “little bo peep” except Nicki put her own spin on this storybook character with an array of colors and prints and, of course, her blonde wig. 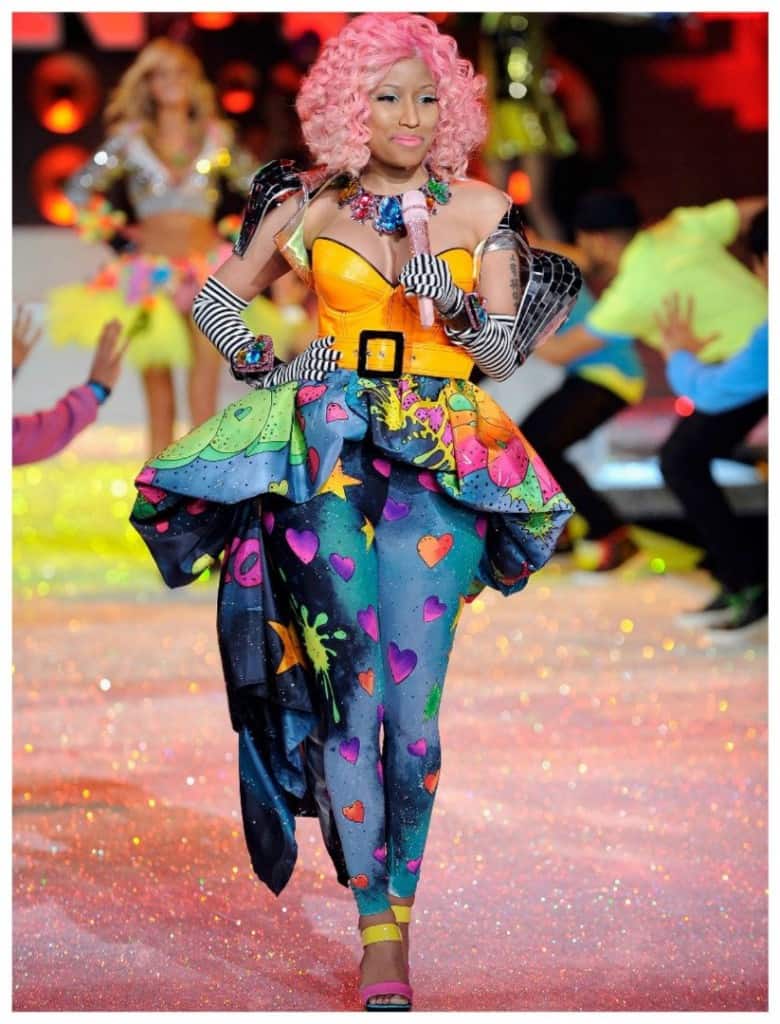 The rapper showed off lots of cleavage in a yellow leather bustier, striped gloves, mini skirt and printed leggings while performing at the Victoria’s Secret fashion show. 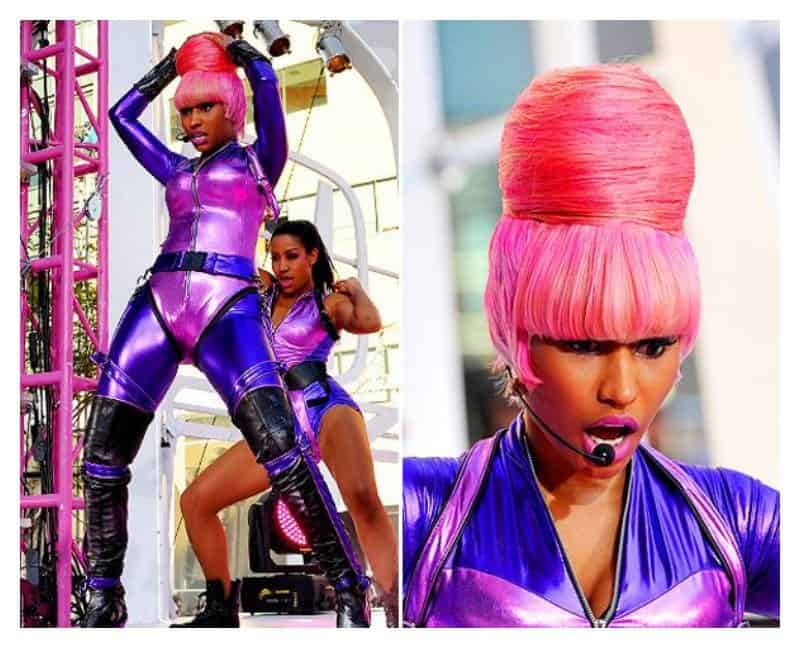 The Grammy winner opted for a sexy space invader costume in pink and purple along with her signature pink hair for a wild performance. 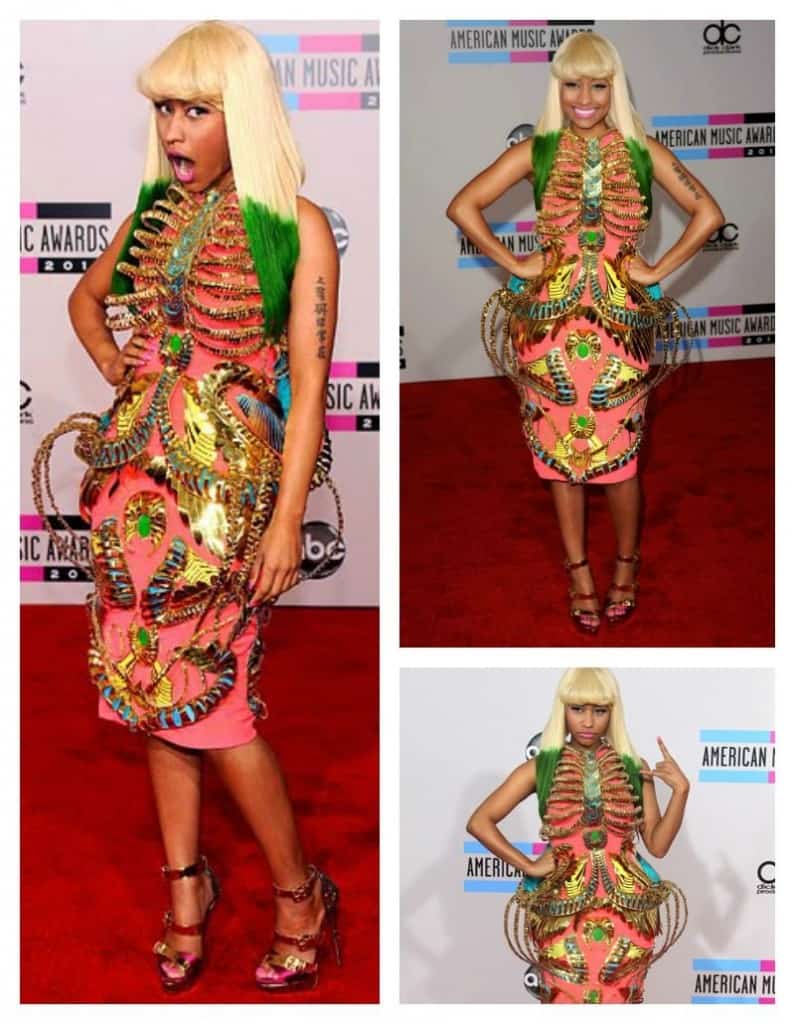 At the American Music Awards, the singer wore a one-of-a-kind pink and green dress with a gold rib cage covering. Oh and don’t forget the blonde hair with green tips. 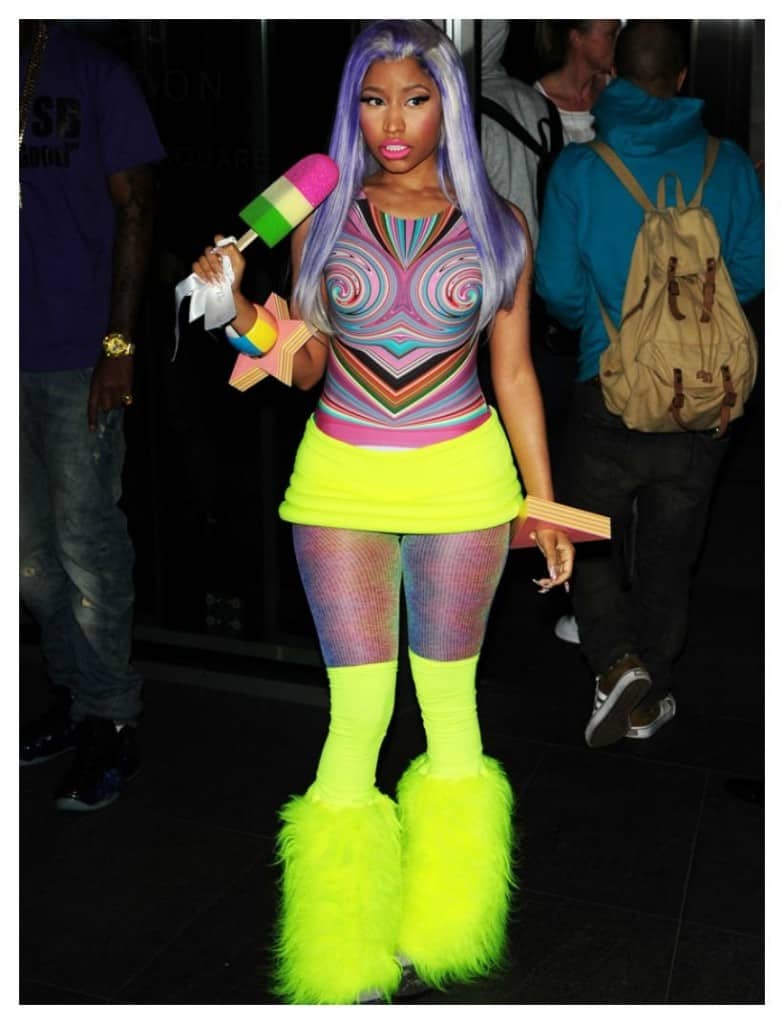 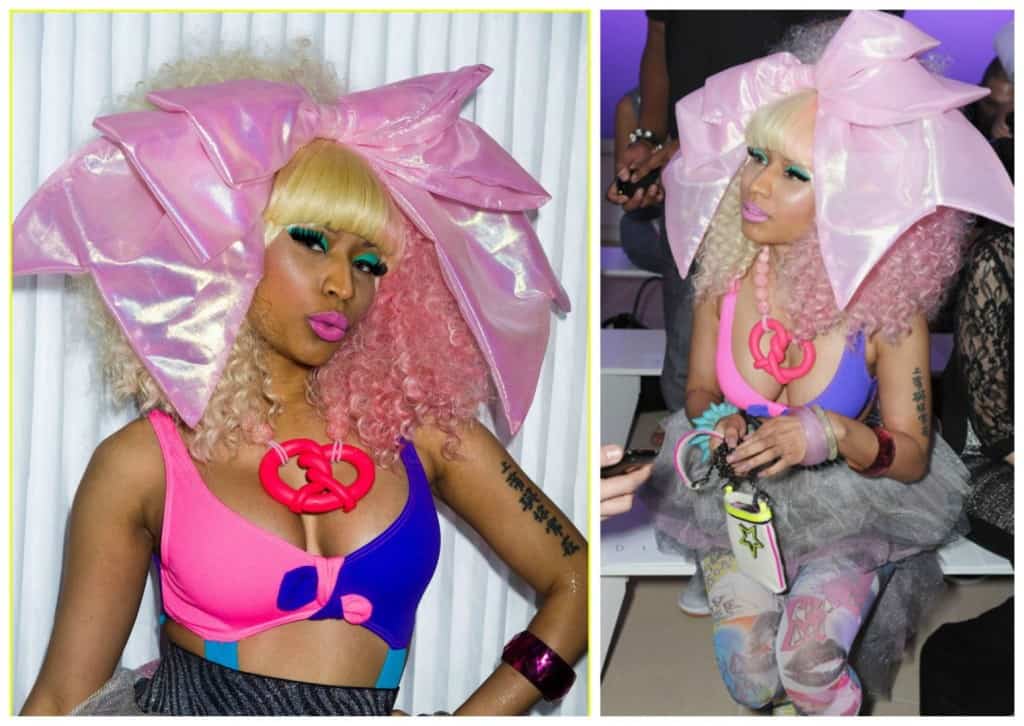 Yes, the tutu skirt and colorful tights are wacky, but look at that humongous bow and pretzel necklace that Nicki wore to the Prabal Gurung runway show in 2012. 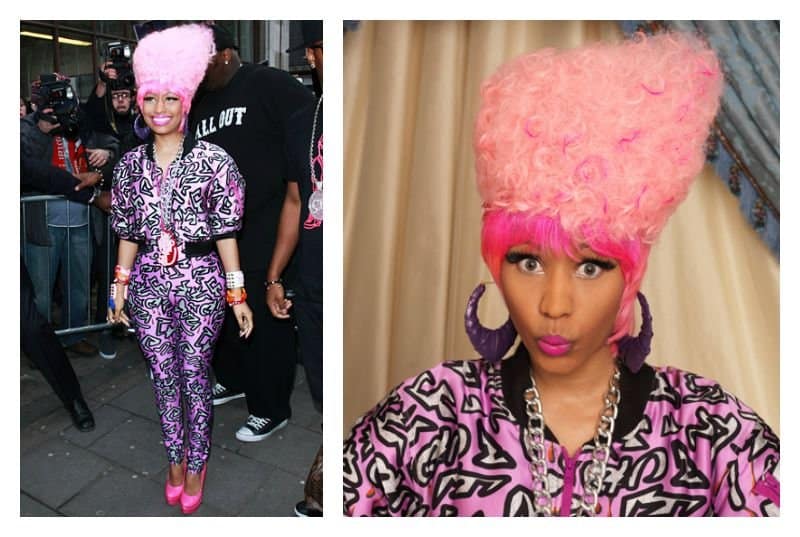 Marge Simpson may not be caught dead in that outfit but that is definitely her hairstyle. Of course, Nicki choose her favorite pink color, instead of Marge’s blue. 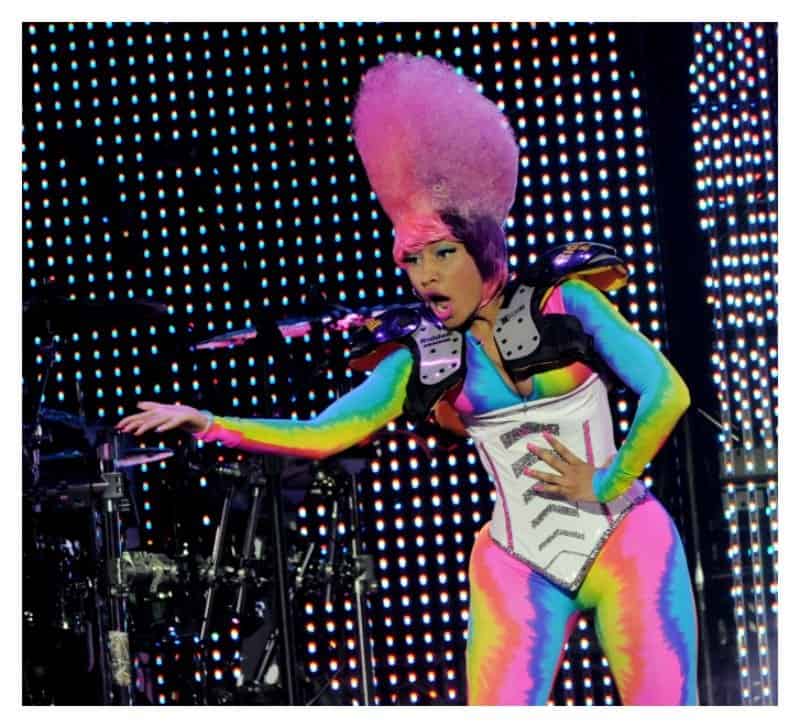 Nicki was going for a cotton candy type of vibe when she opted for this colorful leotard underneath a cinched bustier, plus huge shoulder-pads and purple hair. 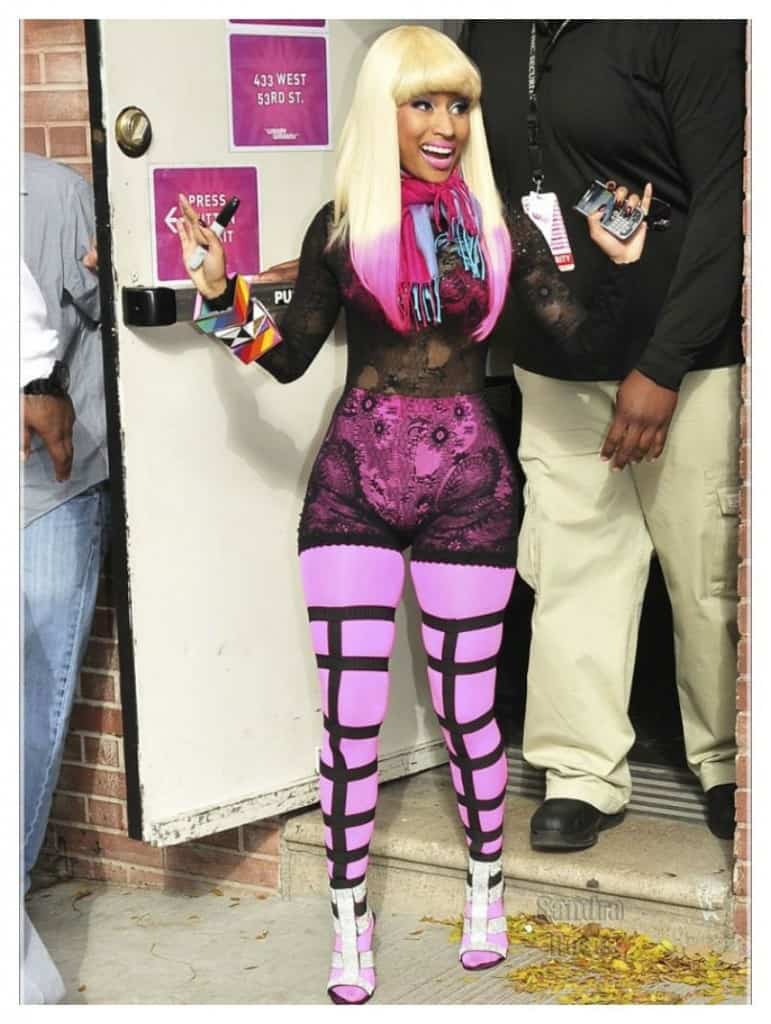 Most of us save lingerie for the bedroom, but Nicki wears hers on the streets. Check out her pink tights, gladiator shoes and black lace lingerie while heading to an appearance. 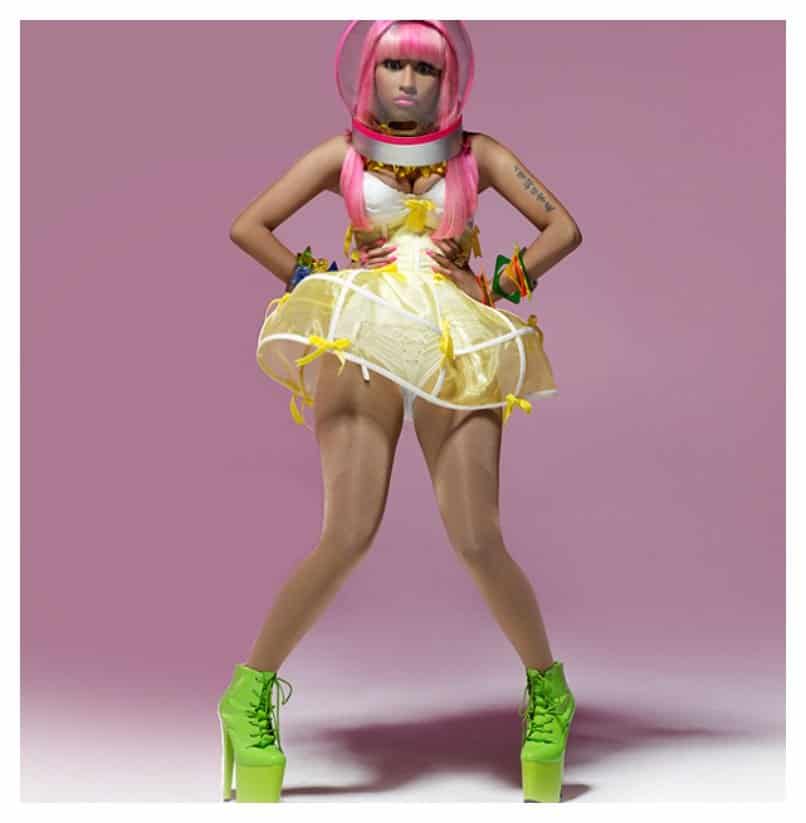 During a photo shoot, Nicki opted for a colorful barbie-inspired outfit and super high platforms with pink hair. On top of all that she added a pink space mask.