20 Haunting Pictures Of Abandoned Locations In The U.S.

Matthew Christopher has been fascinated by abandoned sites since he was a child. A decade ago he started taking pictures of them professionally. He travels the US taking pictures of abandoned buildings. His mission is to record history as industries and social institutions that were once popular now lay in ruins. Here are 20 of his most beautiful, haunting pictures. The rest of his work and more information about the photographer can be found on his website. 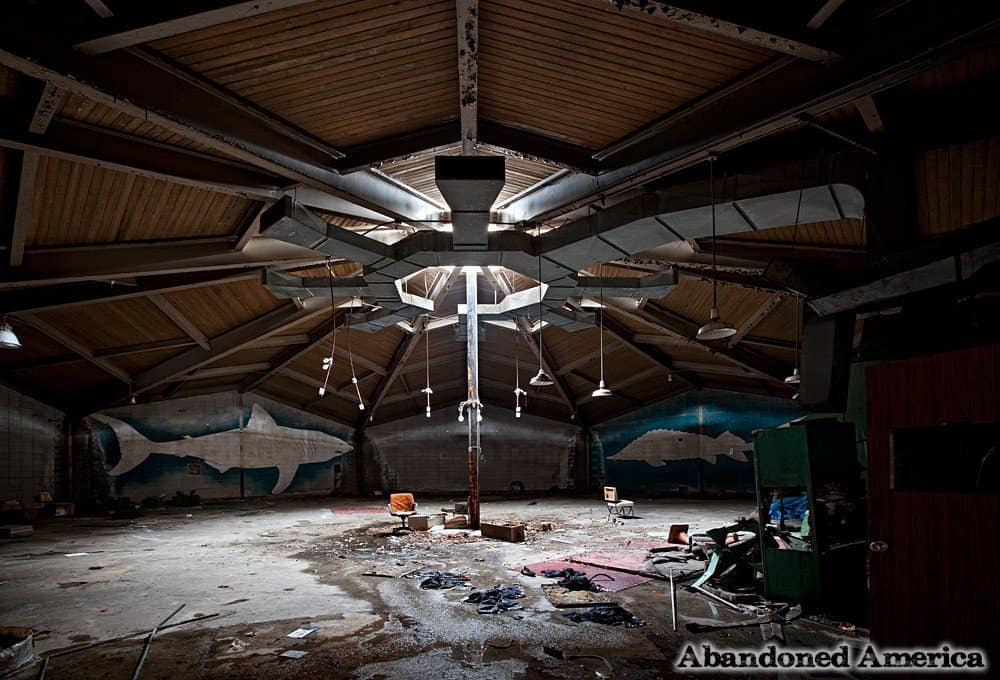 This picture of an anonymous abandoned aquarium shows light peeking in a huge mostly empty room. Only the sharks painted on the wall give us a clue as to what it used to be. 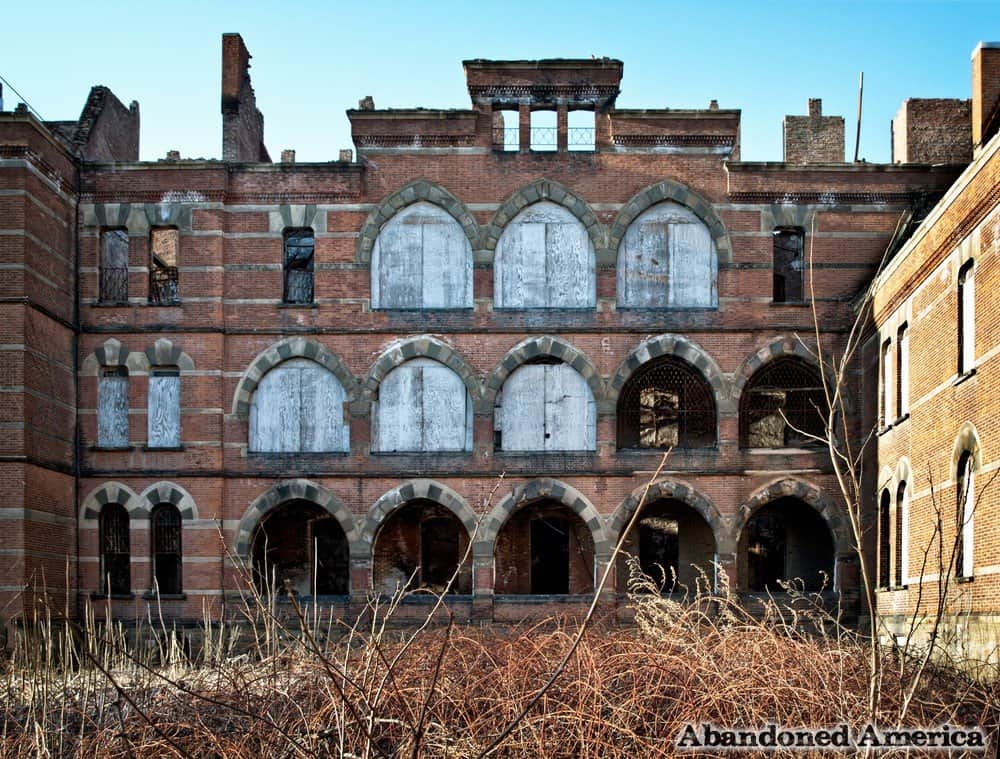 “Algonquin River State Hospital” is the pseudonym for this huge abandoned hospital. It was once built over budget and over schedule, raising questions as to was this too much for a hospital. The product however was breathtaking. Because of the beautiful, delicate materials used in the making of the building, it has not stood up to time and what remains is a husk of its former glory. 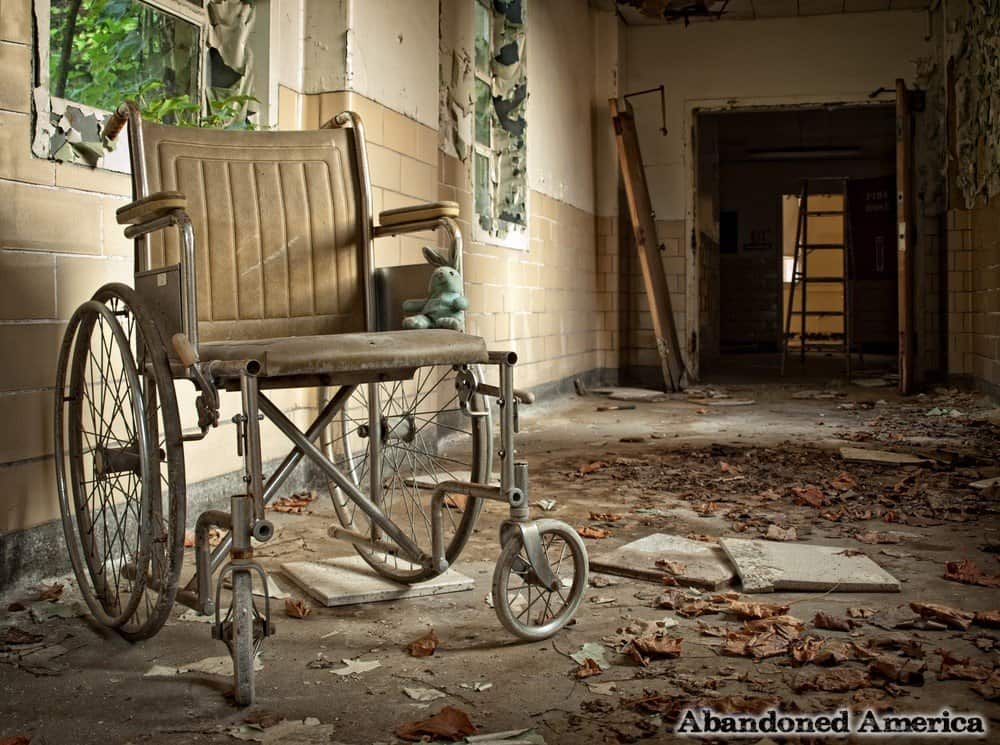 Boston Psychopathic Hospital was the first mental health hospital (as opposed to asylum) in Massachusetts. This hospital closed its doors in 2003 and was demolished in 2011. When this picture was taken, here was a wheelchair and a stuffed animal just sitting there just waiting to be used again. 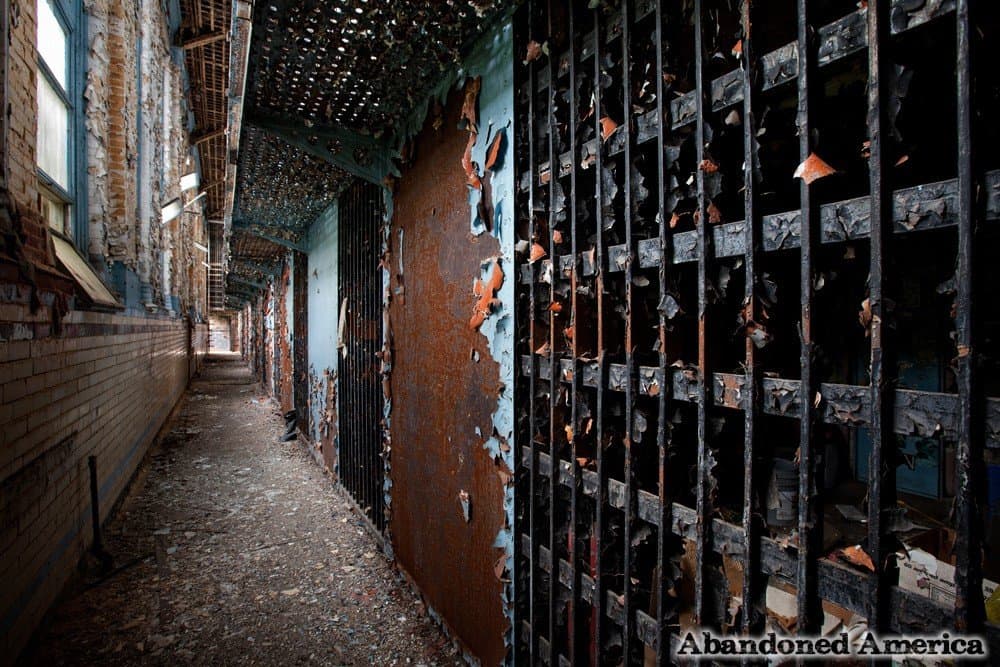 “G.B. Piranesi Prison” is another pseudonym. Christopher uses many fake names in his work because, as he puts it, “Abandoned buildings are vulnerable and I do not want my work contributing to their decline.” The chipping paint on these walls tell stories, some of which would likely be too painful or creepy to hear.

Want To Play A Game Of Cards? 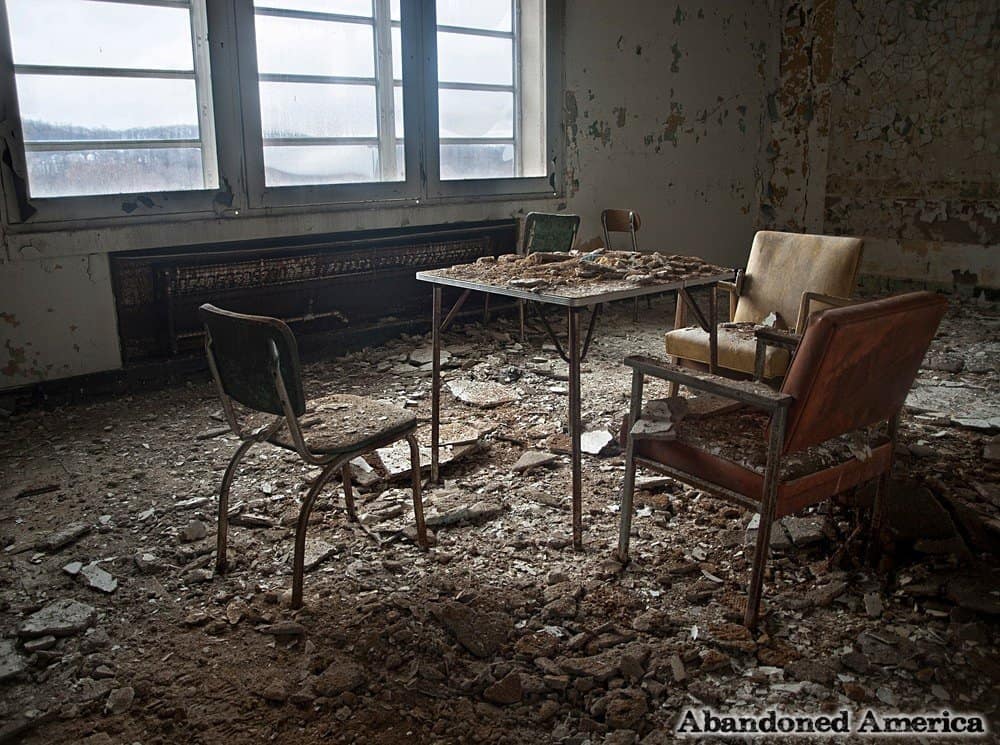 Greystone Park Psychiatric Center was closed in 2008 due to having a poor reputation and public image. All efforts to save the building have failed. On Christopher’s website, he gives a passionate case for why places such as this should be spared the wrecking ball.

To Be A Stone 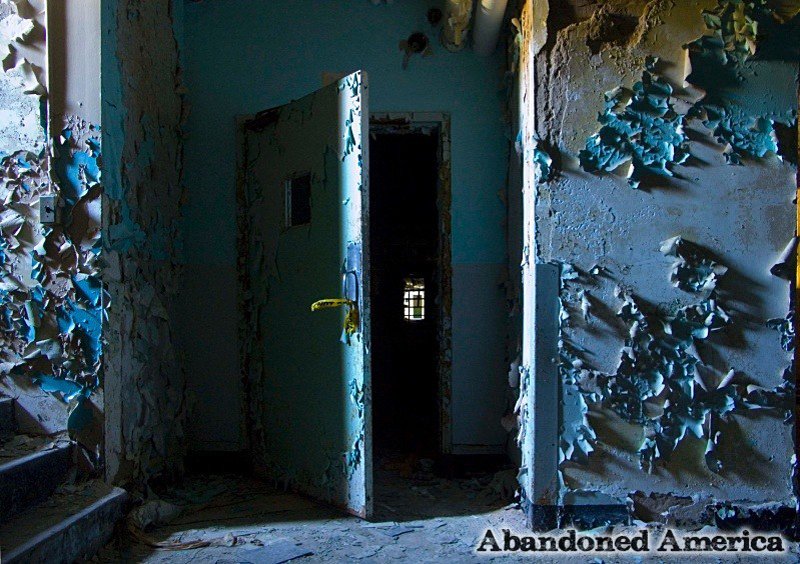 Titled “To be a stone” by the photographer, this haunting image of Henryton State Hospital carries with it the creepy play of light and dark and the huge flakes of paint peeling off.

If These Walls Could Talk 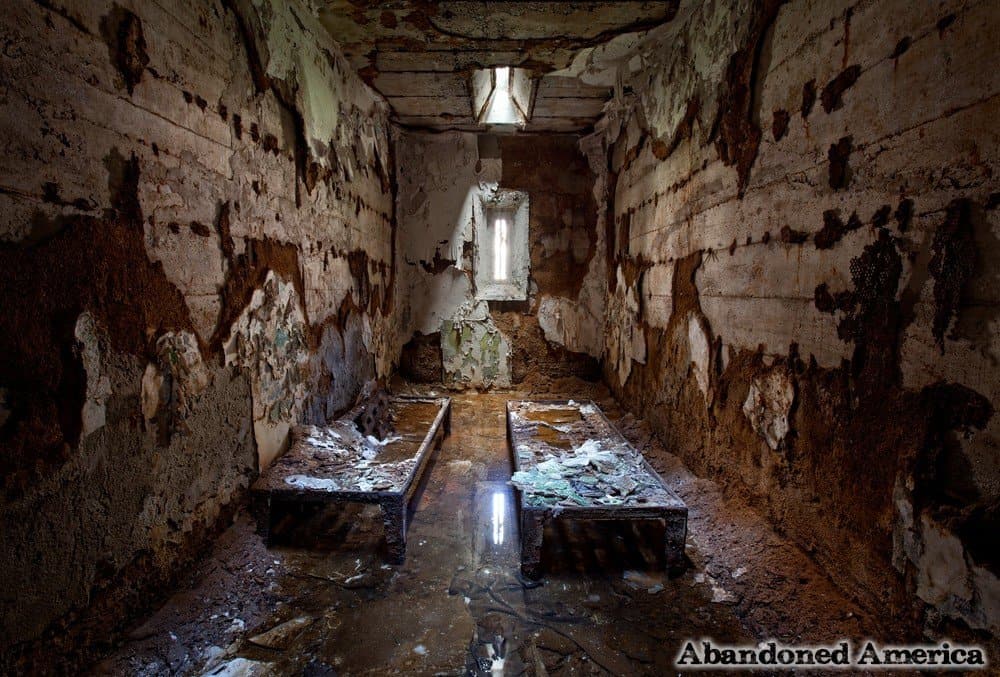 If these walls could talk, they would speak of decades of violence, torture, and questionable ‘medical’ trials. Parts of Holmesburg Prison is still in use for prison overflow and work programs, but it mostly sits abandoned. Imagine sitting in this cell with a roommate and so little light.

“I Went To That School. It Was Beautiful. What A Shame.” 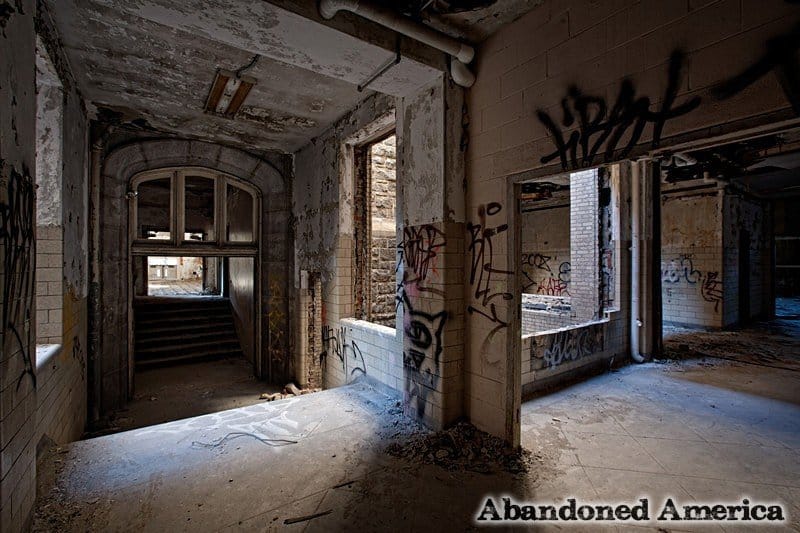 Julia de Burgos Magnet Middle School had been built in 1905 with all of the structural flourishes popular at that period. Built like a castle with stone lions and gargoyles, it was likely very beautiful. Christopher quotes a passer-by commenting on their time at the school.

Need A Machete To Get In That Building 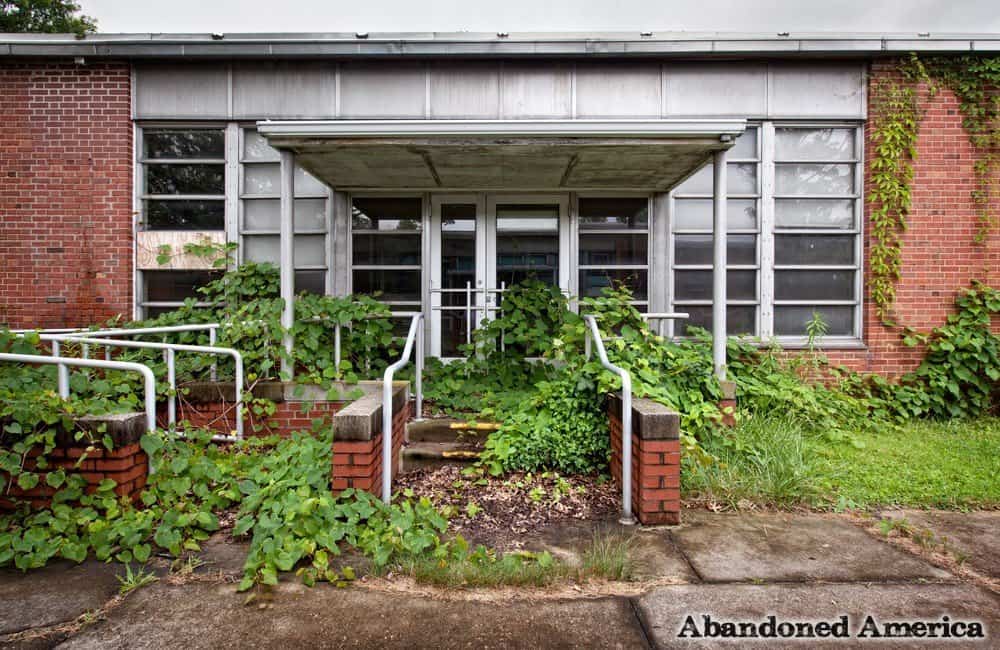 Mayview State Hospital has likely been demolished by now. Here is nature starting the process.

Watch Where You Step! 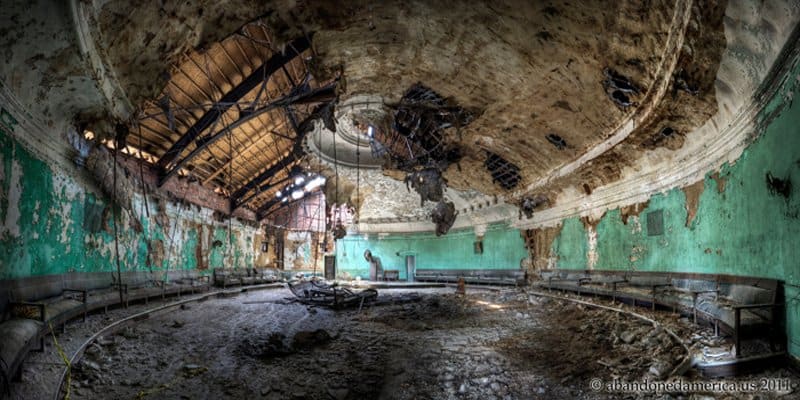 The photographer’s foot went through the floor around the time that this picture was taken. Imagine this huge theater-like room in it’s glory as part of the New Castle Elks Lodge.

Sinking Into The Floor 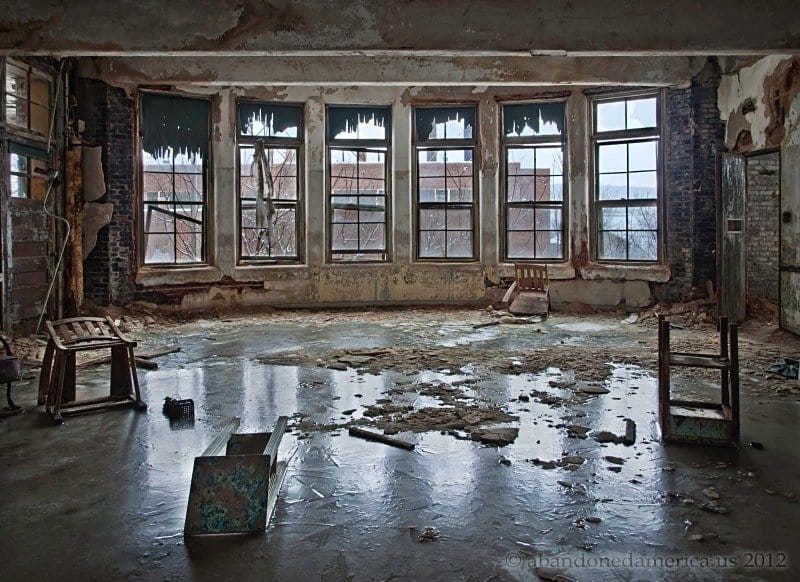 The reflective floor makes it look as if the broken furniture is just sinking in. This was formerly a psychiatric hospital, Norwich State Hospital, and after decades of slow decay is likely completely torn down by now.

What Was That Machine Used For? 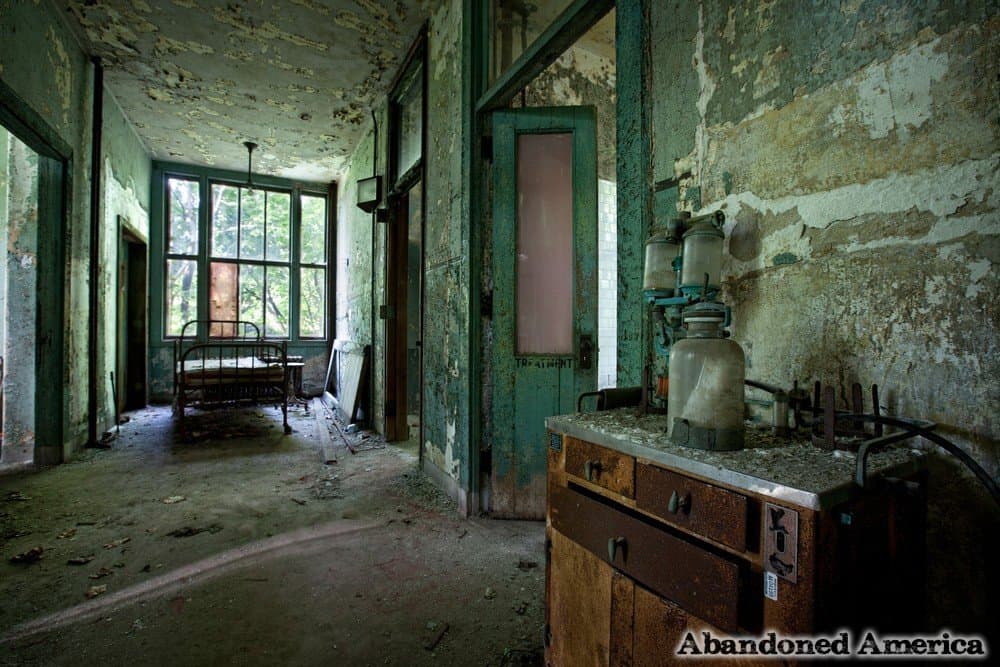 This is part of what was the women’s ward in the largest, most expensive tuberculosis hospital in the US. With the huge window and simple layout, this was likely once a very pretty and comfortable room. 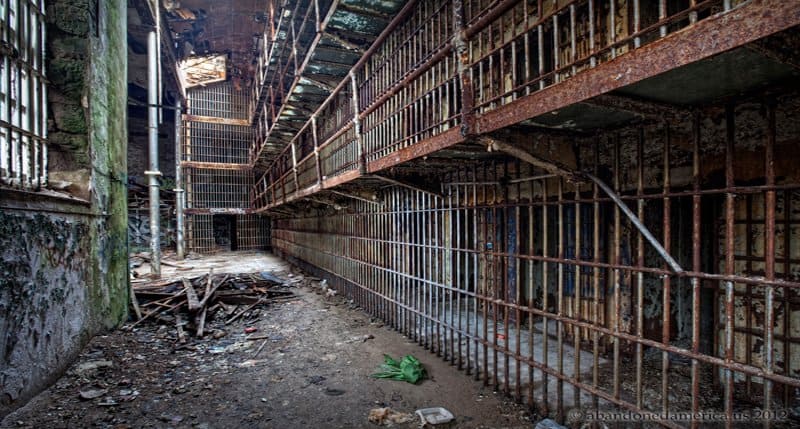 The Old Essex County Prison, designed by a famous architect, was used in the Spike Lee movie ‘Malcolm X’ and now is sitting neglected. What was once the home of a prison is now the home of homeless drug addicts. Two dead bodies of addicts have been found and recovered from the ruins in recent years. 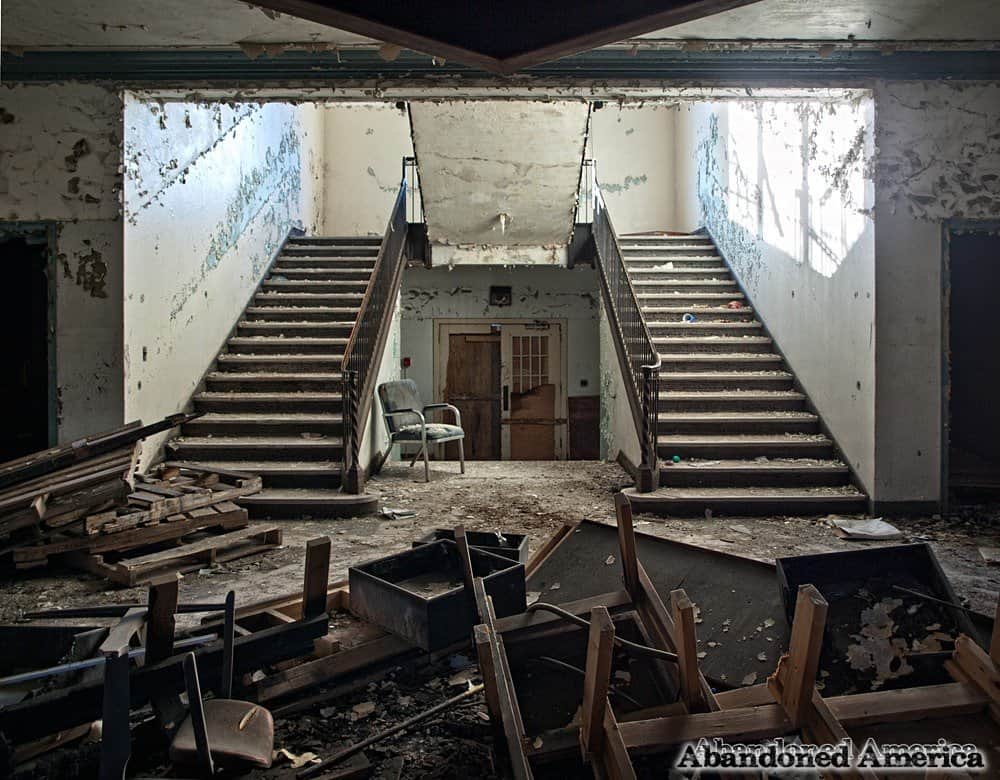 This picture was taken in the administration building of Pilgrim State Hospital which was once the largest psychiatric facility in the world. It had the capacity of 12,500 patients, larger than many small towns.

Not All Abandoned Sites Look Abandoned 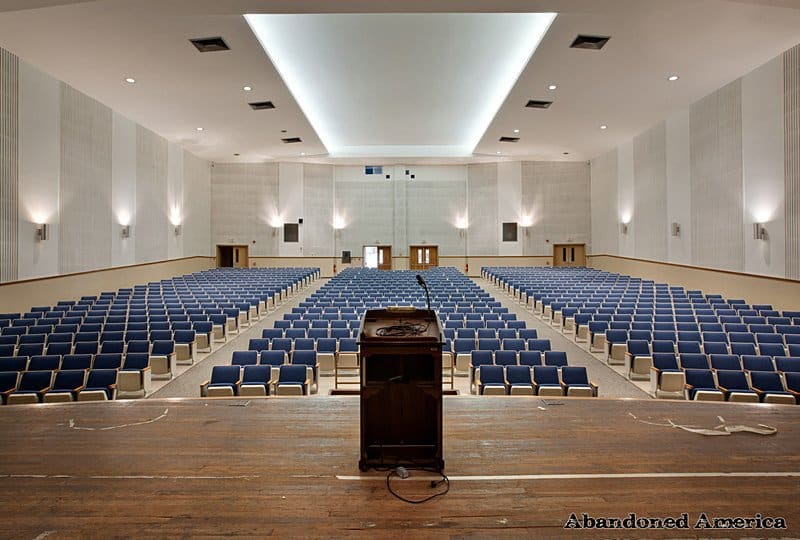 This, the Scotland School for Veteran’s Children, was closed only in 2009 and this was one of the newer parts of the building. You can see only the slightest signs of decay on the stage. Those are the only hints that this is no longer a functioning auditorium. The facility is currently being rehabilitated. 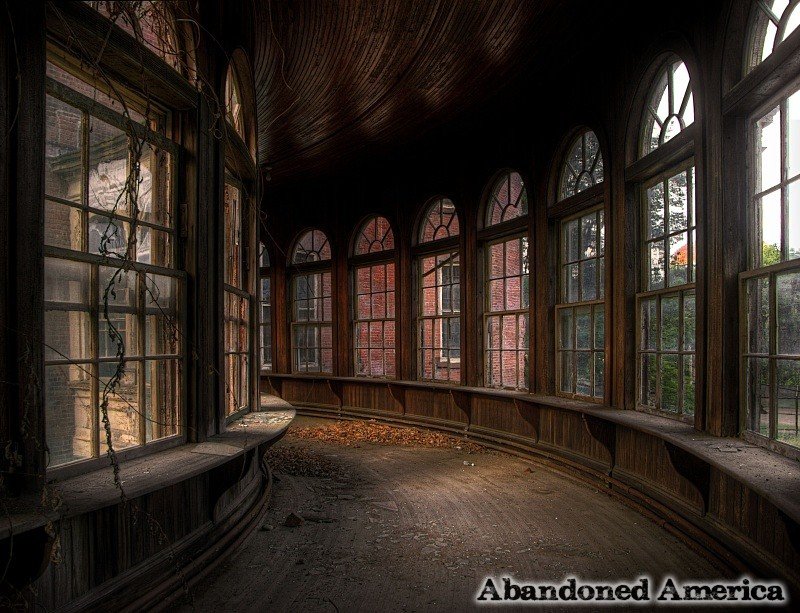 This picture titled ‘Nothing ever dies’ by the photographer is of Taunton State Hospital which is no longer standing. But these pictures and the memories live on. 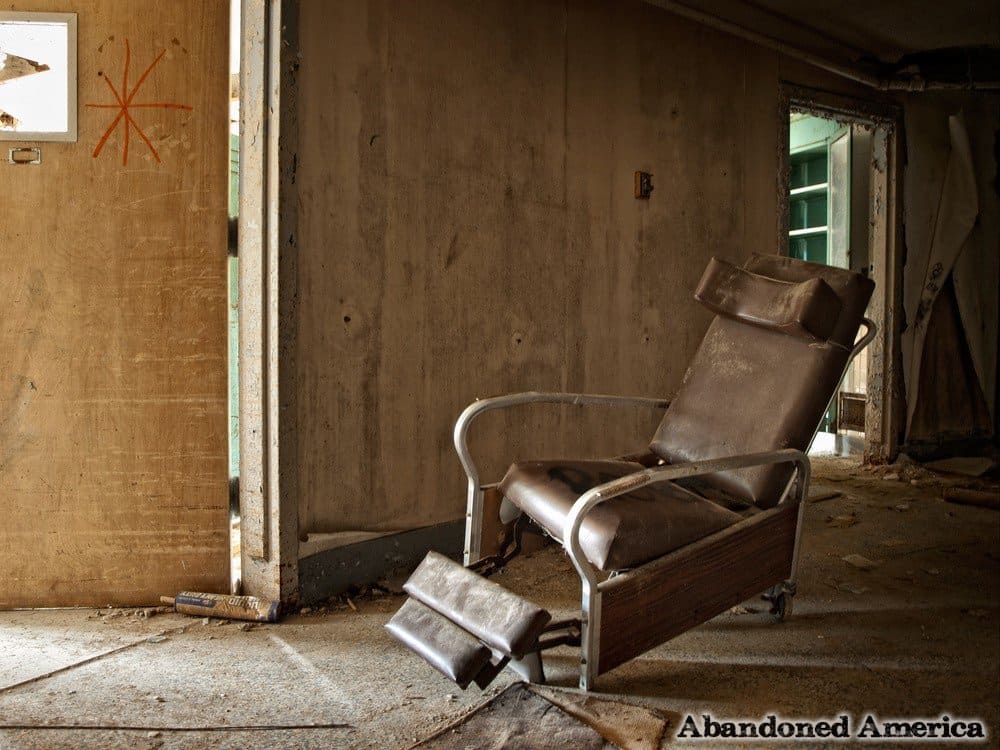 The Ladd School was founded by eugenicists that were convinced that the ‘unfit’ needed to be separated from society. This hell on earth where people were wrongfully confined was the home of untold suffering.

That’s Not A Mirror 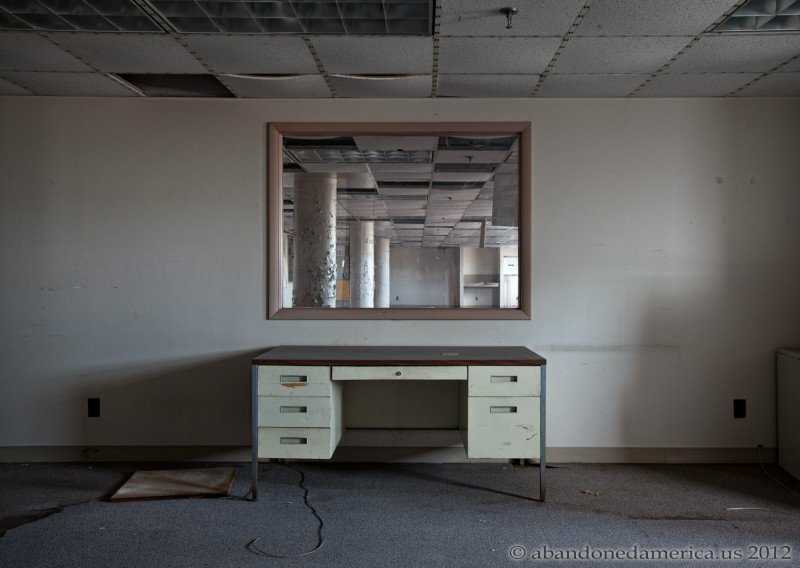 That is not a mirror in this anonymous navy yard. That is an indoor window to the next room. 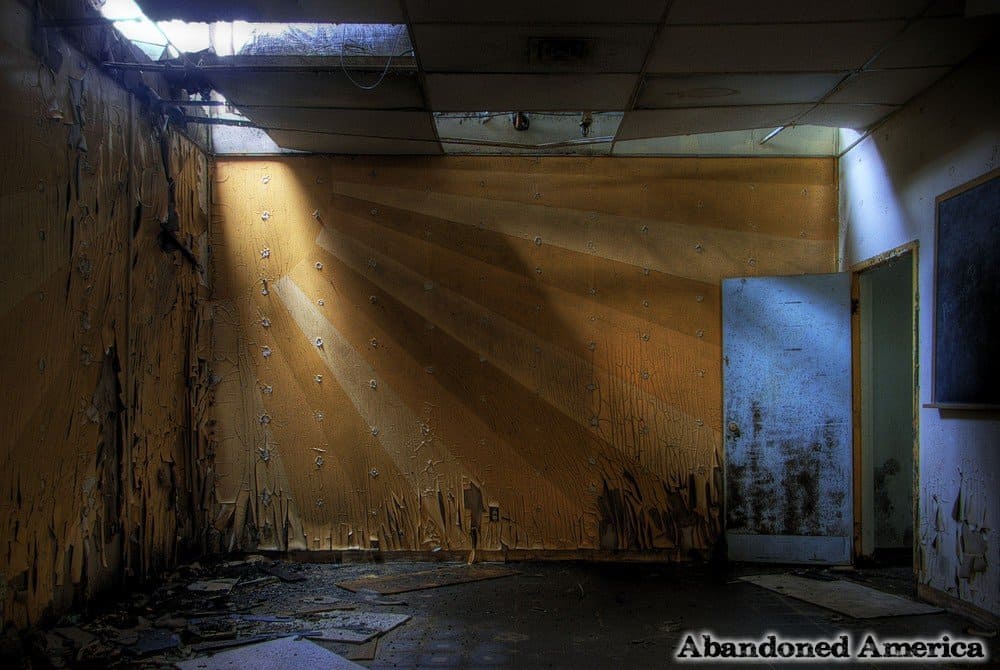 This building was once a school. You can imagine this as a classroom with such a cheery mural on the wall. Here a hole in the roof imitates the art on the wall.

A Final Juxtaposition Of Nature And Man-Made 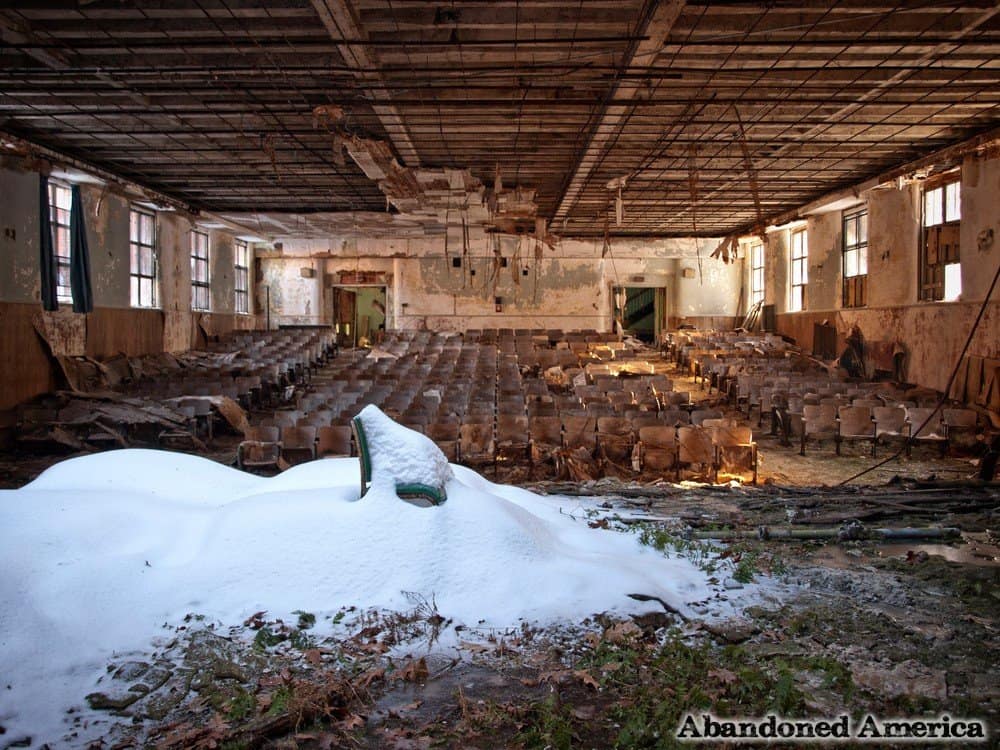 The Undercliff Sanatorium is being reclaimed by nature spilling out onto the stage of this auditorium. Imagine the ghosts sitting in those chairs.