20 Dog Shaming Photos That Will Have You Cracking Up!

If you are a dog owner, then you know your furry little friend has had some moments where they have done something wrong. It could be a simple thing, like getting into the trash can in the bathroom, or it could be a big thing, like getting into your purse and chewing up all your makeup! These 20 dogs were caught in the middle of being bad puppies and their owners are doing some dog shaming, but they are too adorable to stay mad at them. 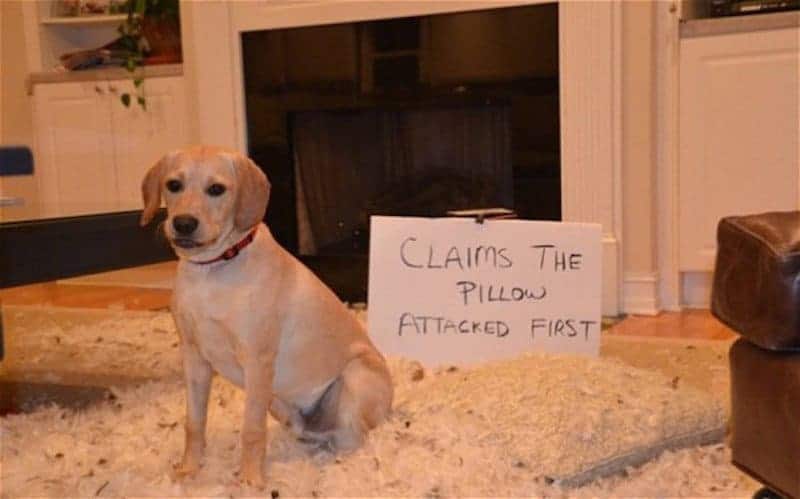 We love this one, as the dog was only doing this in self-defense! That pillow attacked him first and he showed it who was boss. 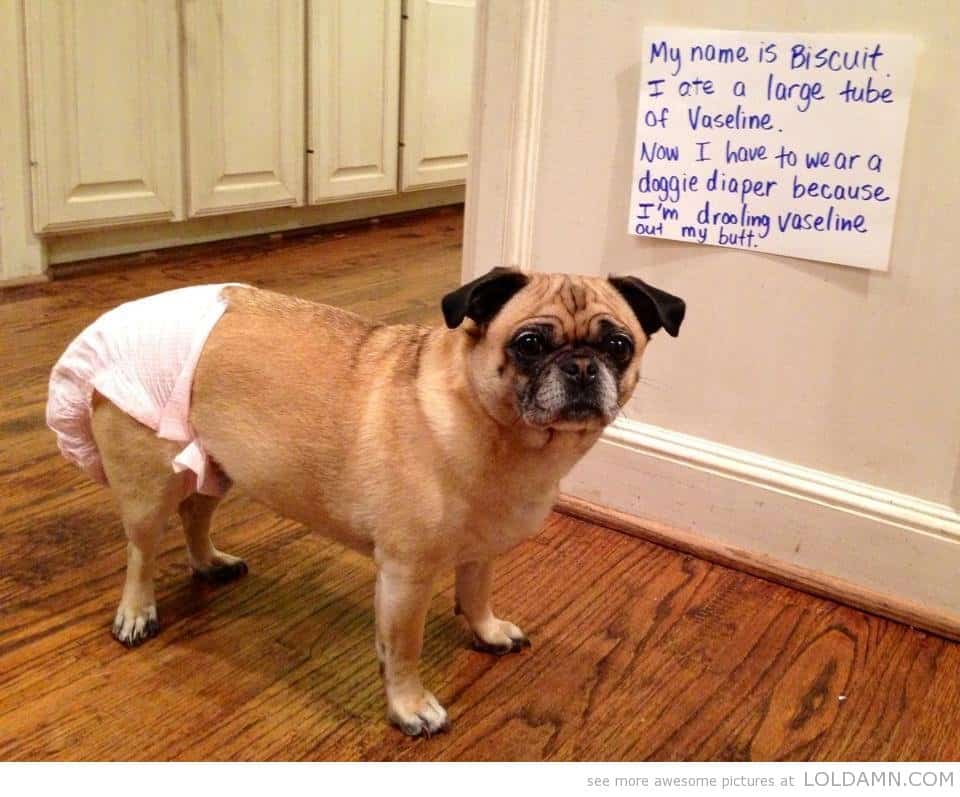 You can’t beat this one, as the dog got into the Vaseline and now it is leaking out of its butt! What a disgusting image, but such a funny photo. 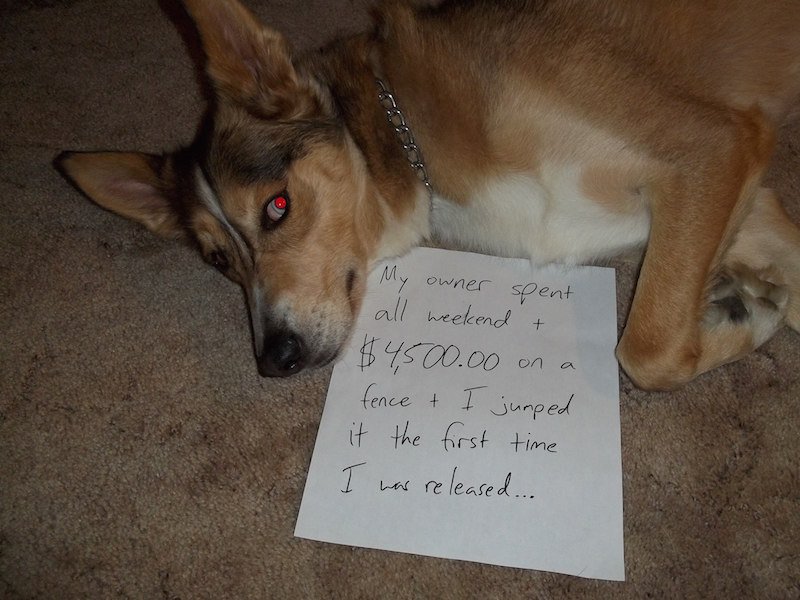 You can tell this guy knows that he was a bad boy! The owner spent all that time and money on a fence and he jumps it the first opportunity he gets. You can’t help but laugh! 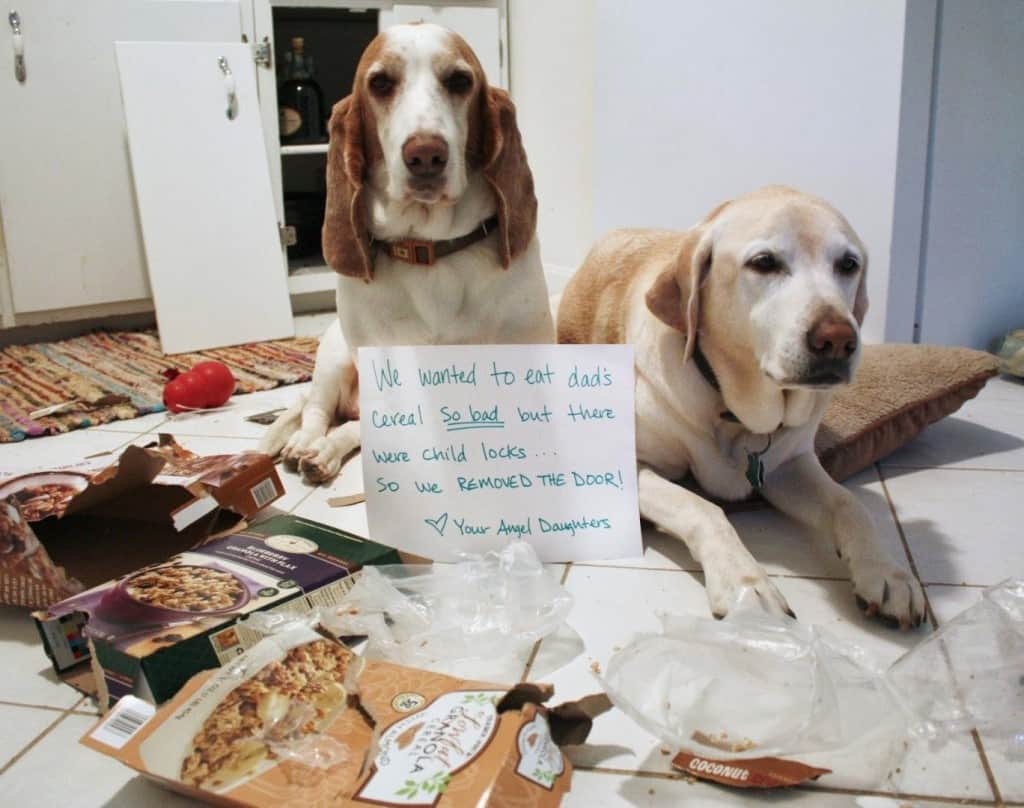 These dogs were on a mission! They knew where the cereal was and they wanted it, so no door was going to stand in their way. 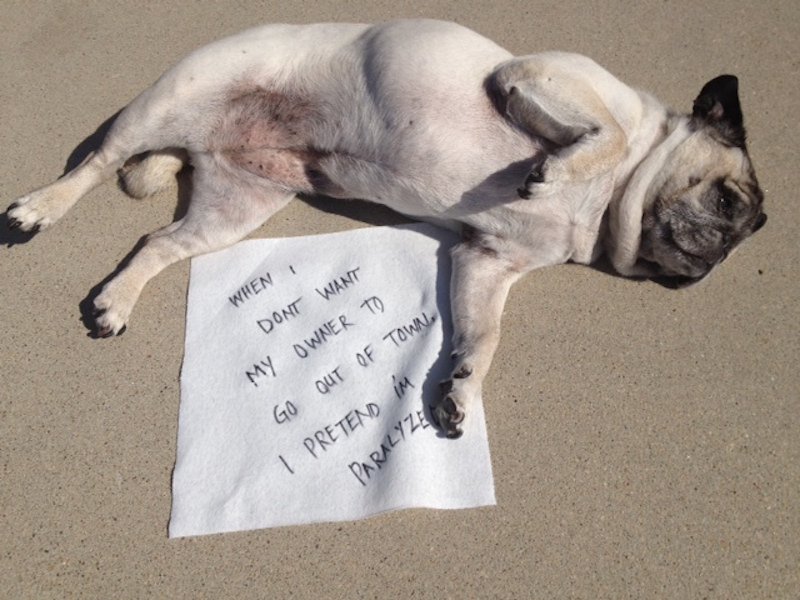 How funny is this? The dog knows that the owner is going to leave them, so they play dead to make them stay. 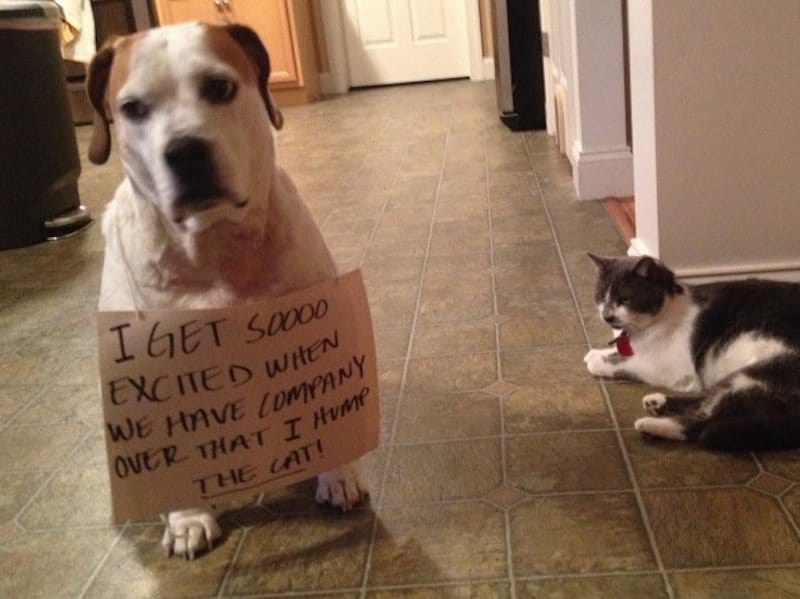 We are thinking that these people don’t have many people over, as the dog seems to get nervous and humps the cat when they do. The cat doesn’t seem to be afraid of him though. 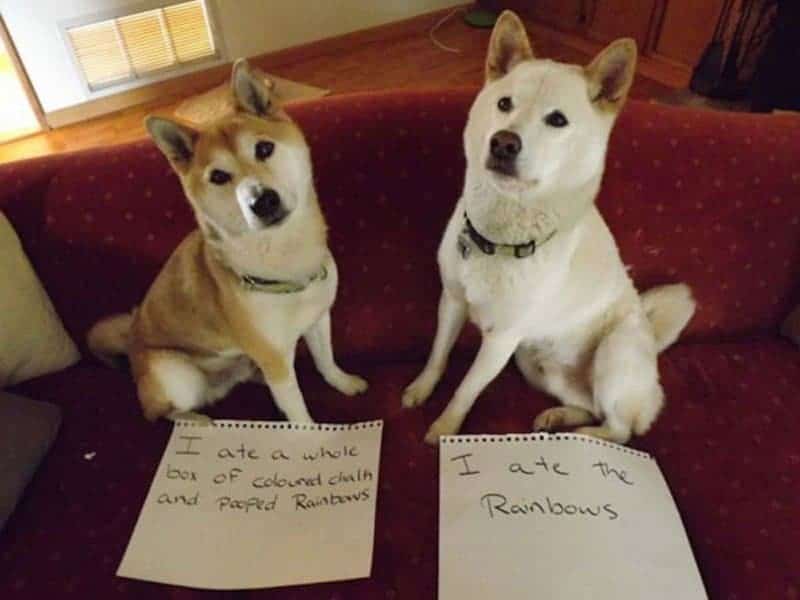 Besides being super cute dogs, we love how the owner labeled these signs. One dog ate the chalk and had rainbow poop and the other one ate rainbows! 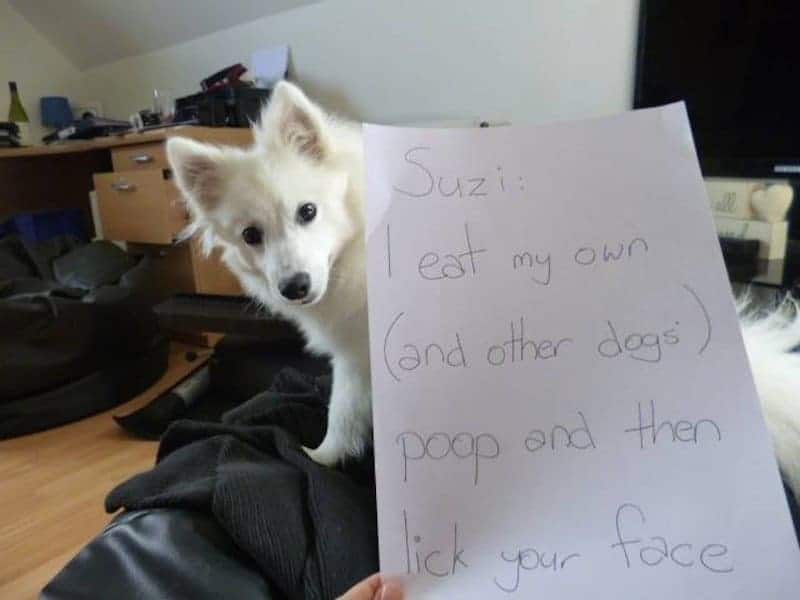 They say that dogs have the cleanest mouths out there, but this draws that into question. How could a dog eat their own poop and have a clean mouth? 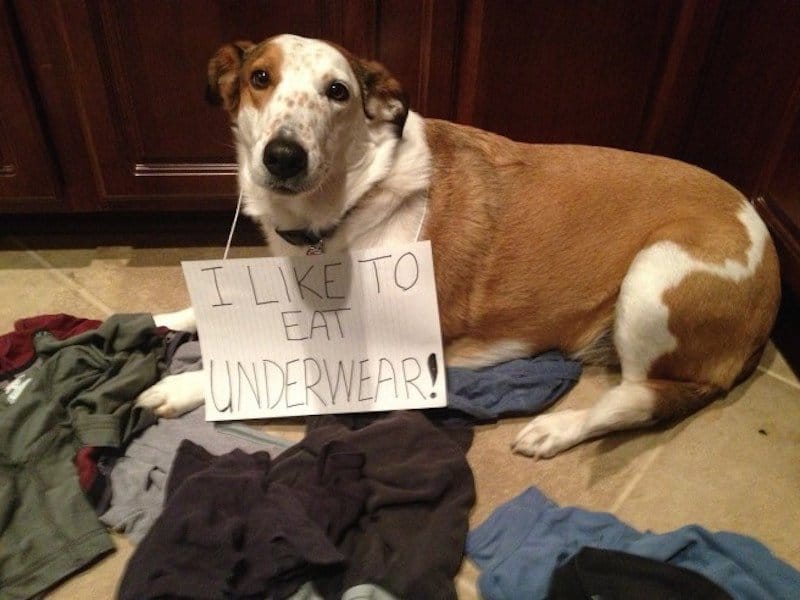 Even dogs have fetishes, as this one seems to like underwear. He likes to eat them, as seen in the photo. 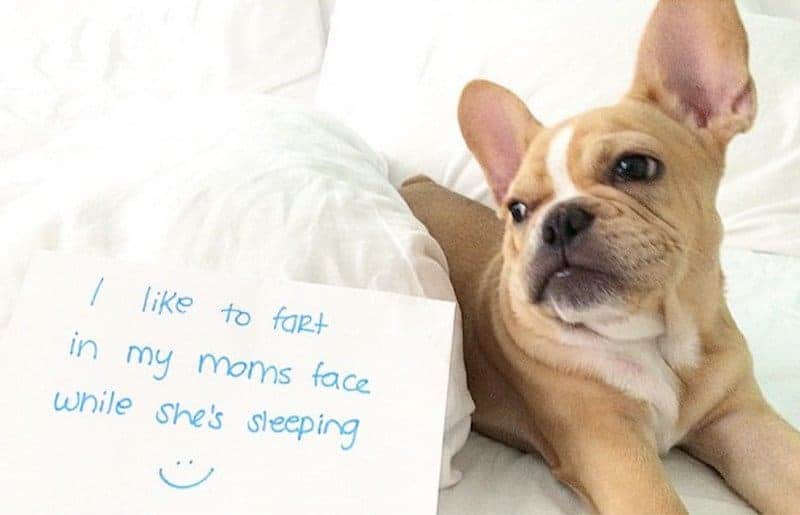 Dog farts are the worse! No matter what, they can smell like death and they sneak up on you. This owner had no chance to get out of there, as the dog farts on her head when she is sleeping! 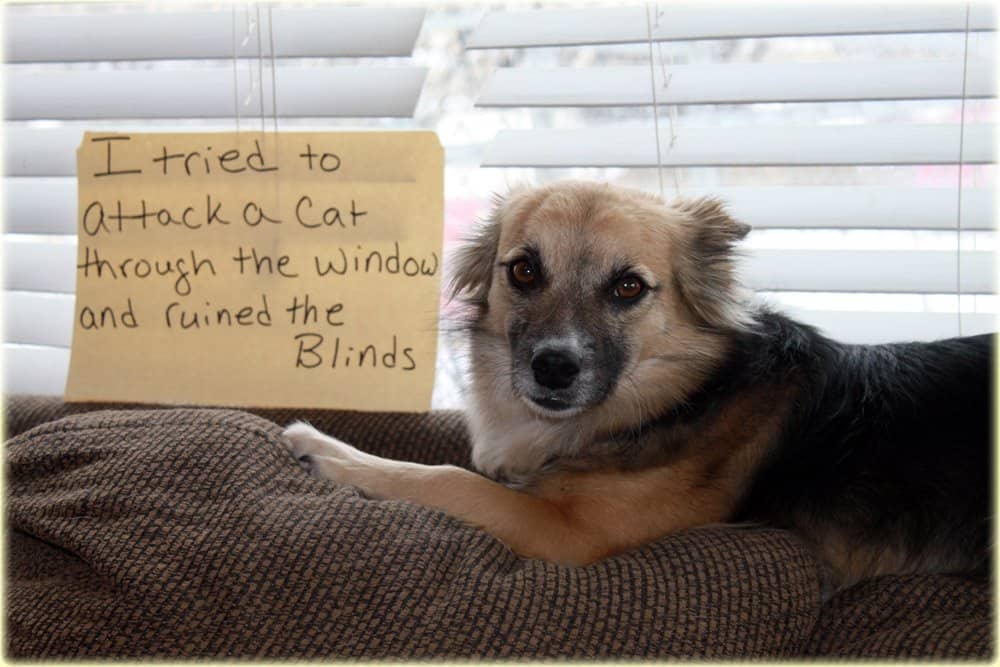 Dogs always want to chase after cats and they get so focused they forget where they are even at! This guy got so caught up with the cat that he ran right into the blinds and ruined them. 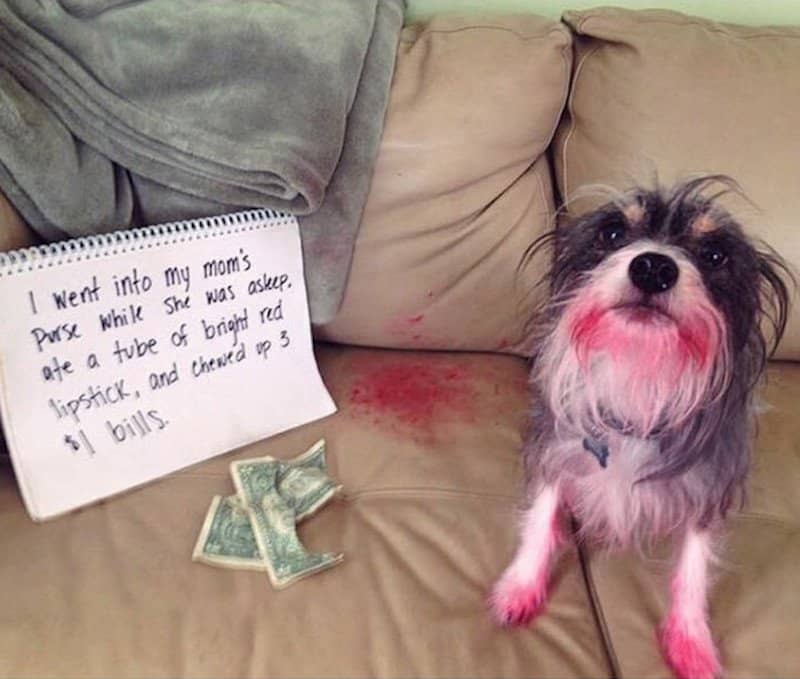 This is definitely competing for one of the funniest photos on the list. This little guy got into their owner’s purse and proceeded to eat up the lipstick! It got everywhere, but how can you not laugh at him? 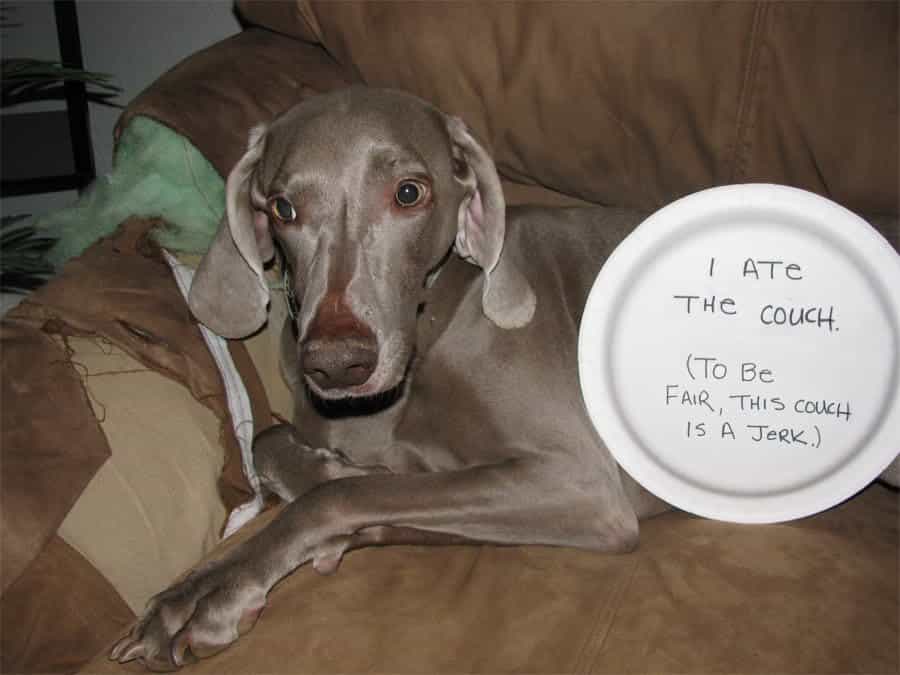 Again, these owners are so clever and how they write up the shaming. This guy decided to gnaw on the couch when the owners weren’t looking, but only because the couch was being a jerk! 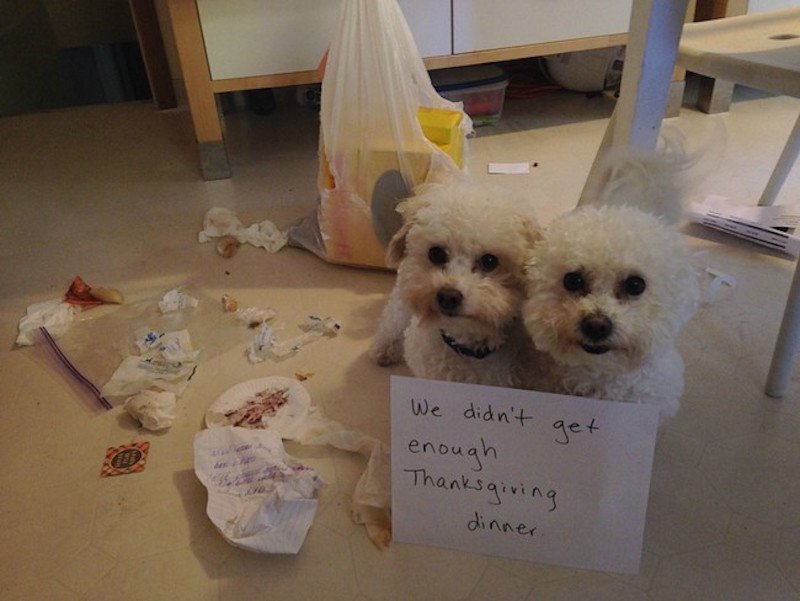 Most of us are completely stuffed when Thanksgiving is done and over with, but apparently not these little guys! They were ready to eat more, so they dug in the trash for some leftovers and made quite a mess while doing it. 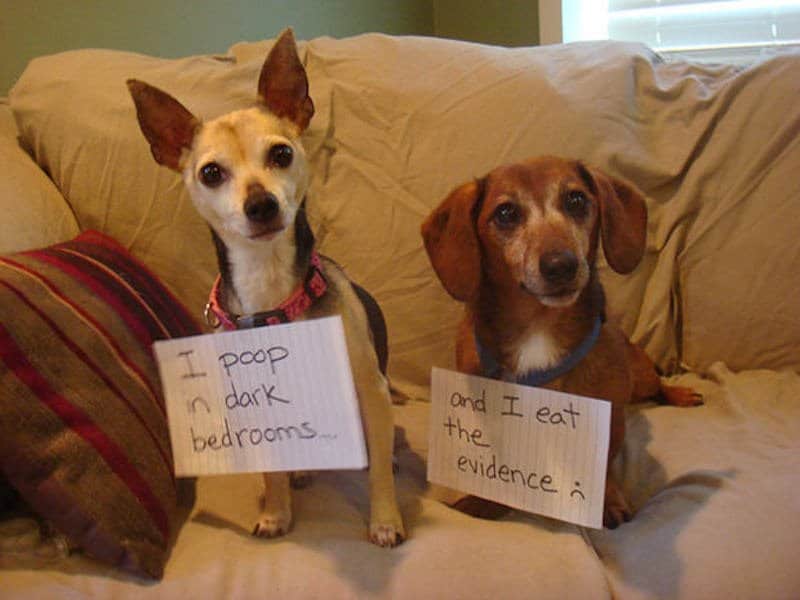 Dogs sure love to eat poop, huh? Here are some more dogs working together to get in trouble, but maybe the one is trying to save the pooper! One is bad and poops in bedrooms, so the other one is trying to keep him out of trouble and eats the evidence!

Chewing The Noses Off His Toys 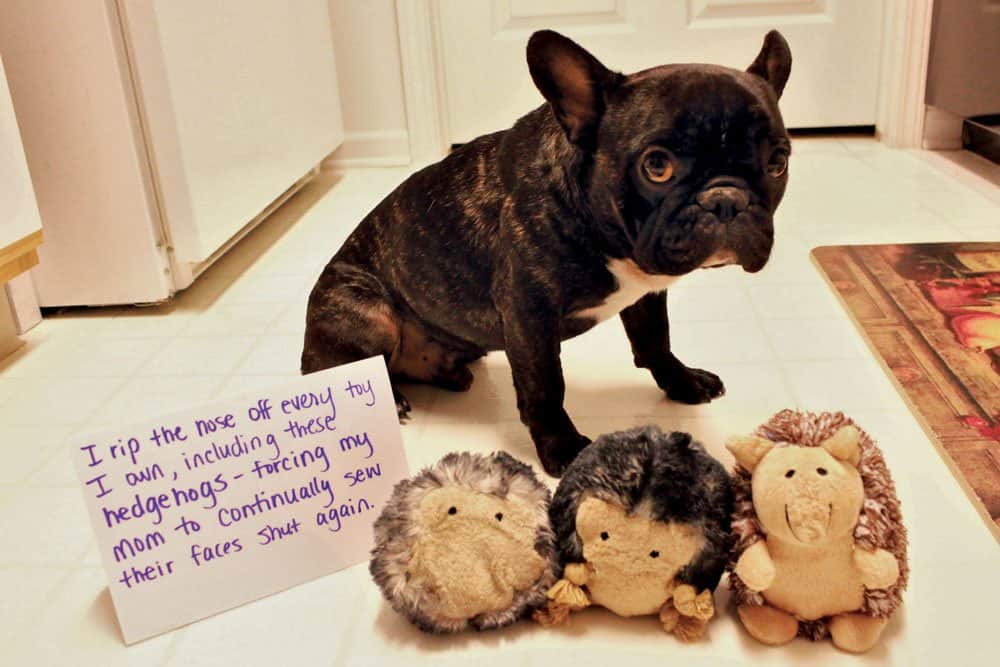 We think this is kind of a crazy one, as the dog only chews off the noses. Why not the ears or hands and feet? The mom is not happy though, as she has to keep sewing them back on! 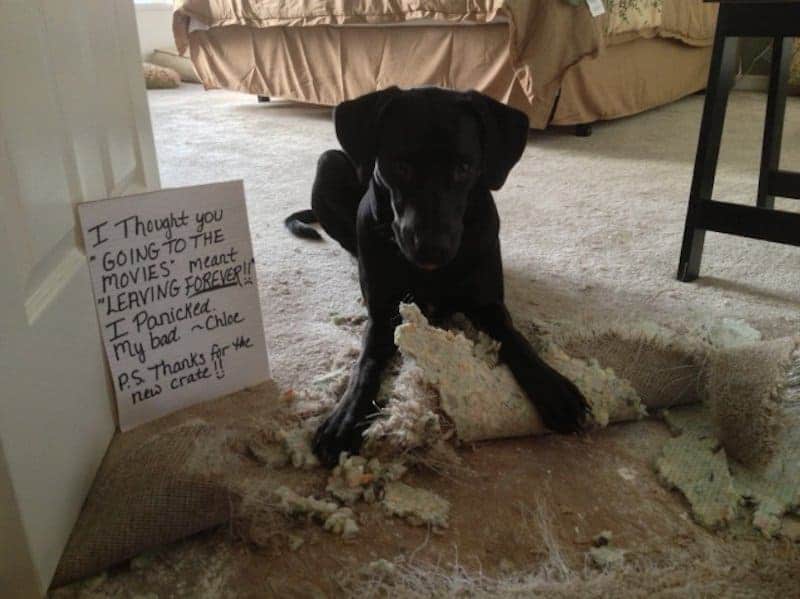 This guy thought his owners had left him forever and he was determined to dig his way out of that house! That is a lot of damage to that carpet and we love how the owner said he loves his new crate! 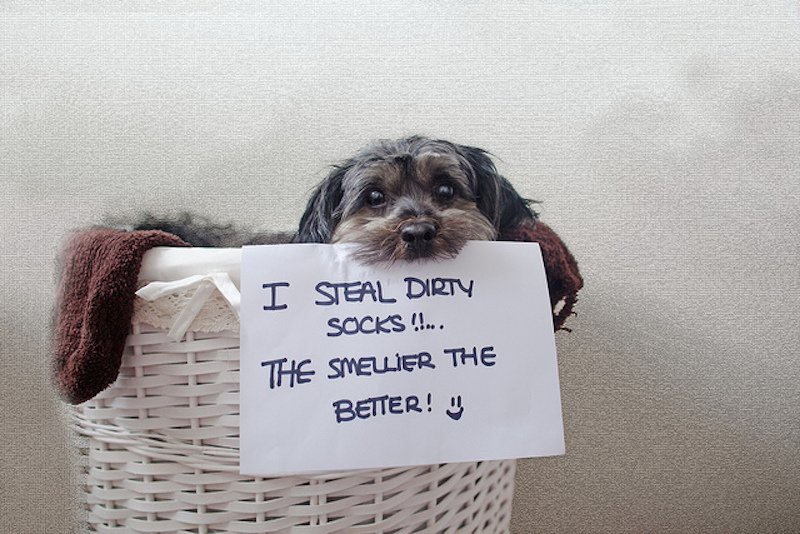 Another fetish here, as this dog seems to like dirty socks! We think maybe the smell reminds them of their owner, but still kind of disgusting to go for the smelly ones. 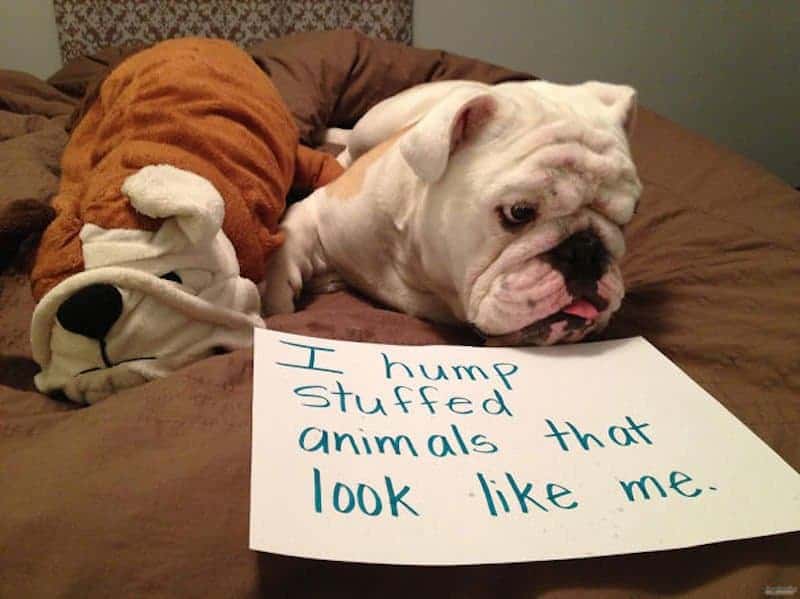 You can’t blame this dog, as the stuffed animal looks like him, so he tries to hump it. He does not seem phased by it at all, so he’ll continue on with it! 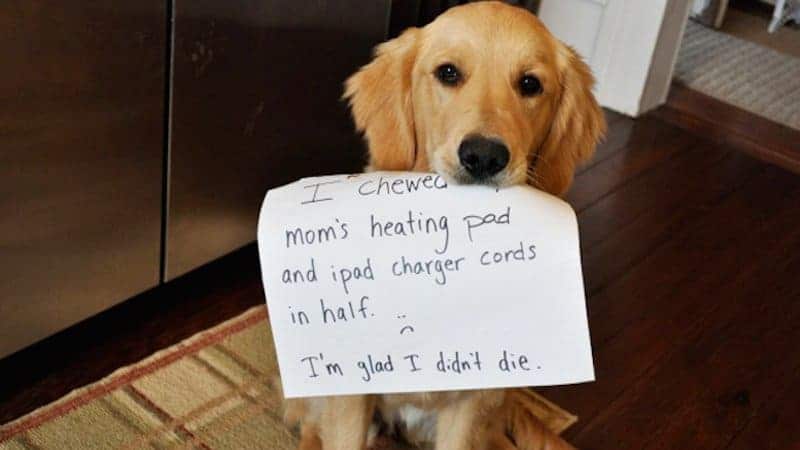 Dogs love to chew on electrical cords, but this dog went wild! He got the heating pad first and then moved on to the iPad charger. What is so appealing about the cords?