Brides look high and low all over the world for the perfect dress. They are told that this will be the most important day of their lives, so it’s only natural that they want to find the best dress to spend that day in. They want something that represents them. Something that incorporates things that they like. Sometimes wedding dresses can be as unique as the woman wearing them. Here are 19 examples of some of the strangest dresses around. 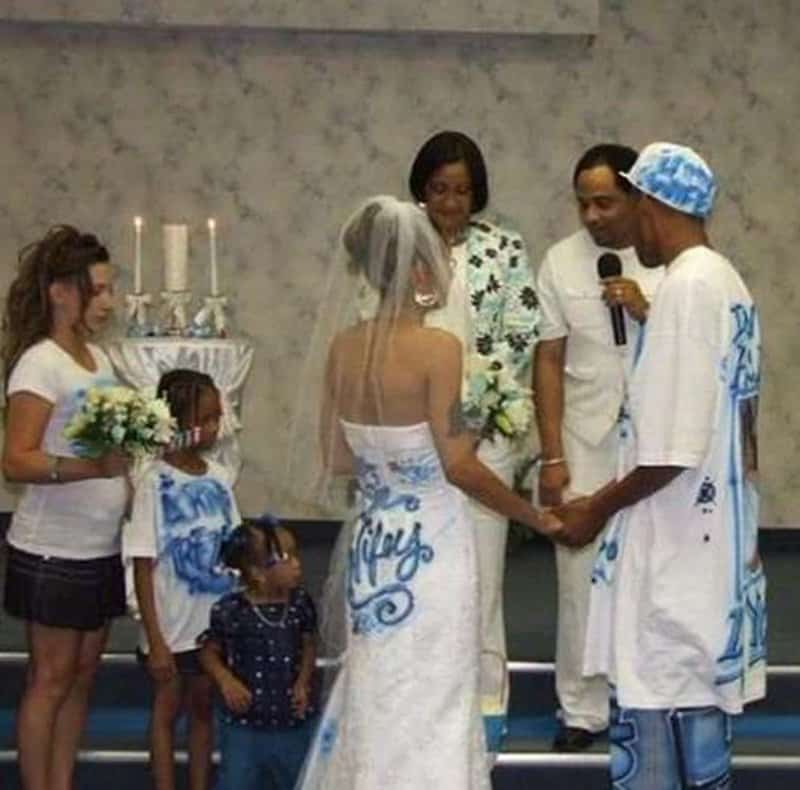 Airbrush looks cool on tee-shirts, pants, hats and other accessories. Not so sure about across the butt on a woman’s wedding dress, though. 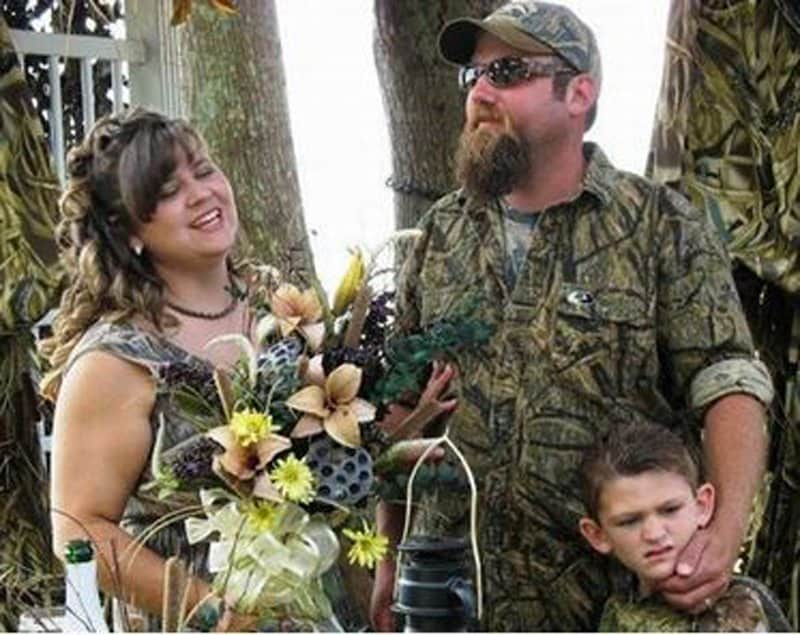 Why is camo so popular? It’s understandable among hunters and outdoorsmen and women. This obsession, however, has extended even to wedding dresses. Do they want to blend in to their surroundings at their outdoor wedding? Just in case they find the perfect deer?

The Dress Is A Cake 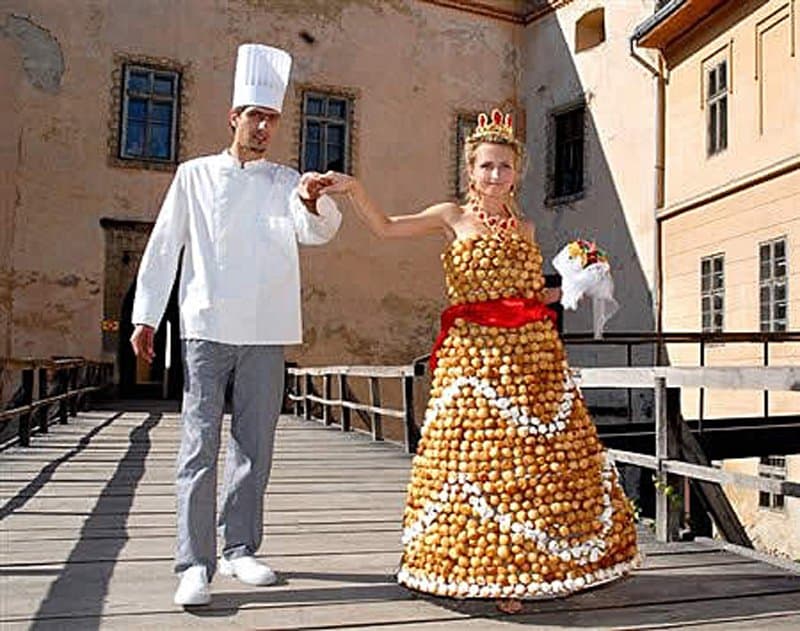 Hopefully that dude beside her is the groom. How fun is that to have the bride dress as a cake and the groom as a baker? Maybe they just really, really like cream puffs. Not sure if they’d be edible after being worn all day. 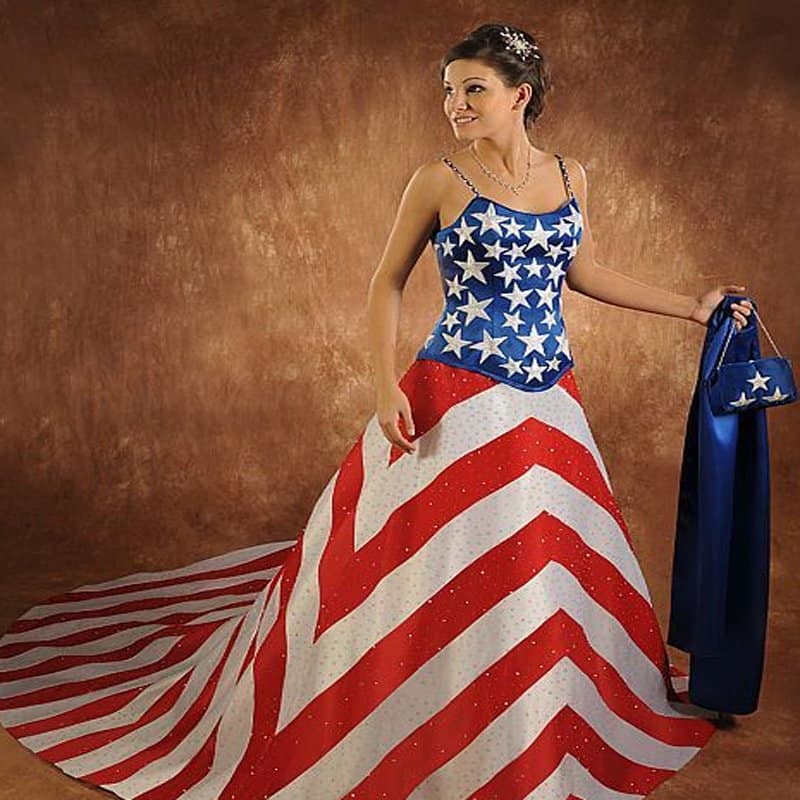 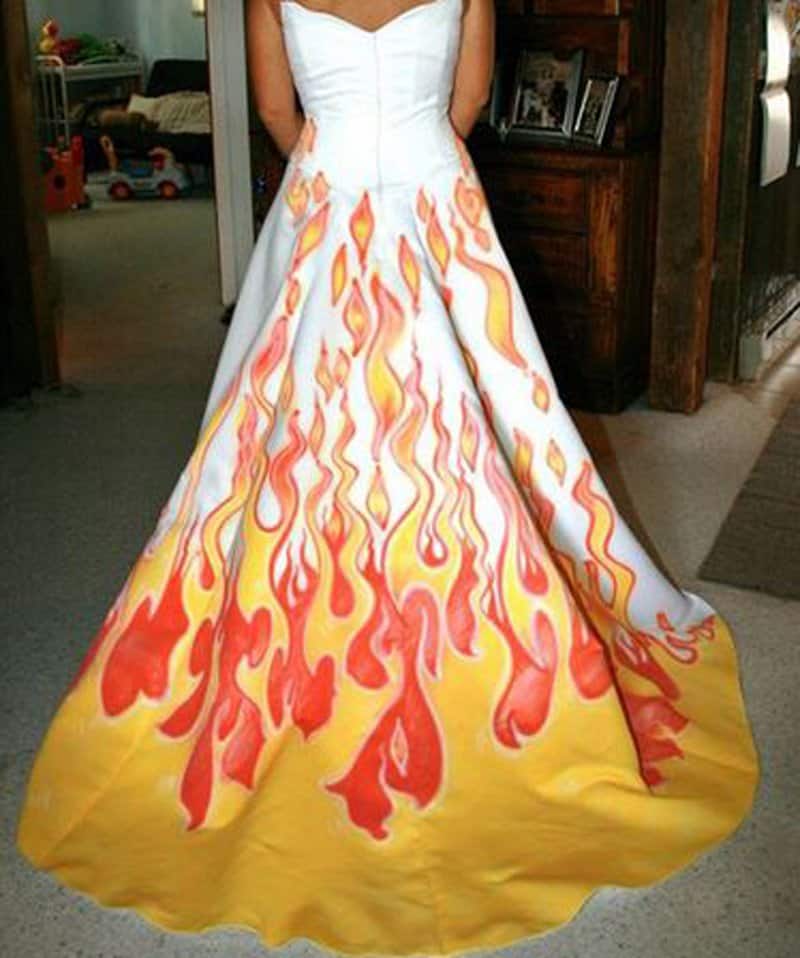 Flame patterns are cool on cars and some other things, but not quite wedding dresses. She must’ve really, really liked flames.

At Least They Match. 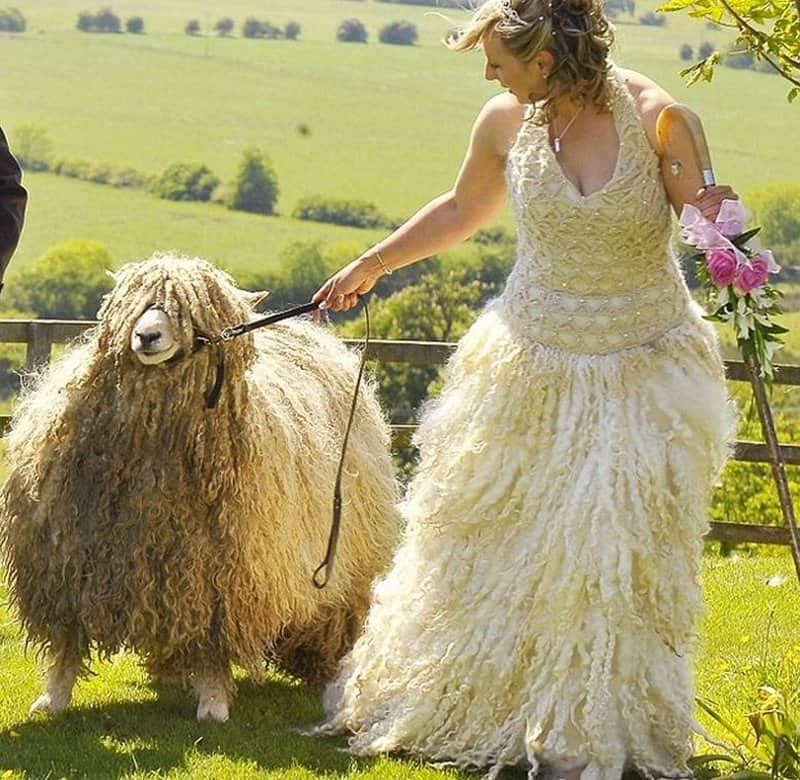 This bride wanted to really represent herself and her favorite animal at her wedding. She nailed it!

Please Say This Is Photoshopped 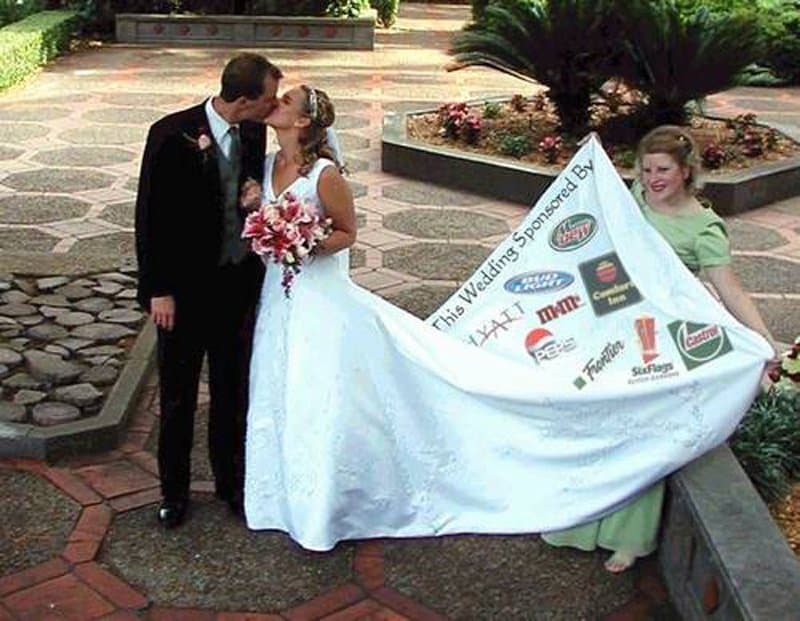 Yes, weddings can be crazy expensive. There has been studies that have shown that retailers will jack the prices up if they know a person is in their store buying for a wedding. This could be one creative way to pay for it, but it is a little tacky.

Dress Made Of Condoms 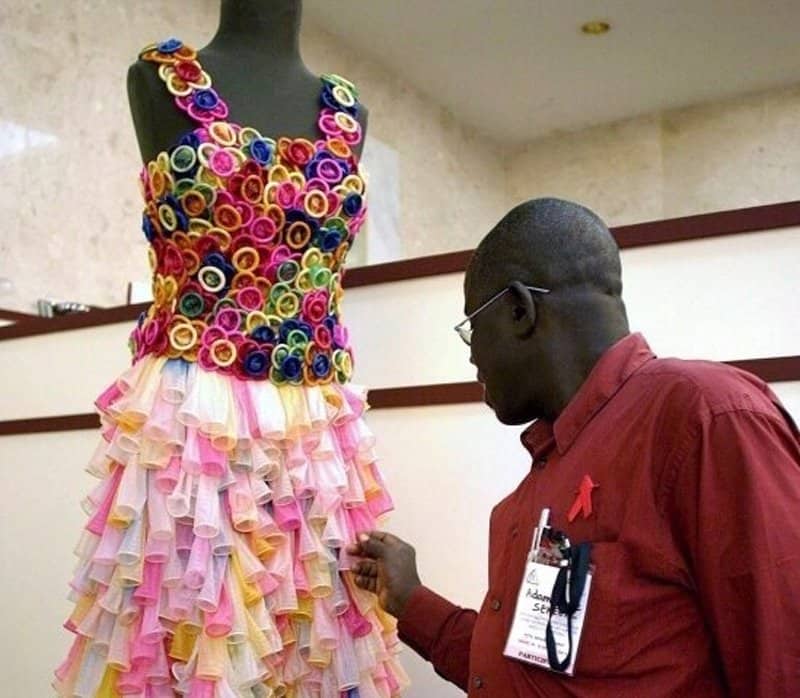 Yes, that is a wedding dress made of condoms. It was created to bring awareness to AIDS in Africa. Nothing wrong with bringing attention to important causes, but, practically speaking, that is not the greatest wedding dress.

Dress Made Of Divorce Papers 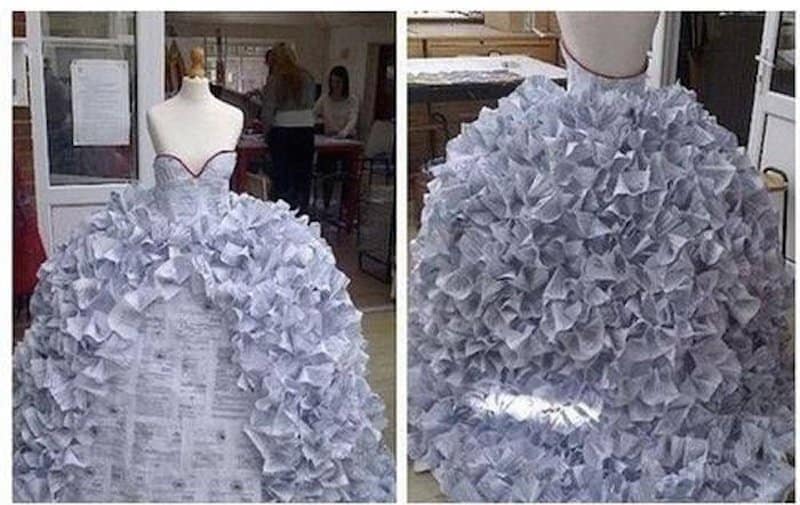 This cynical designer actually made a wedding dress out of divorce papers. Can’t they all just be a little more optimistic? 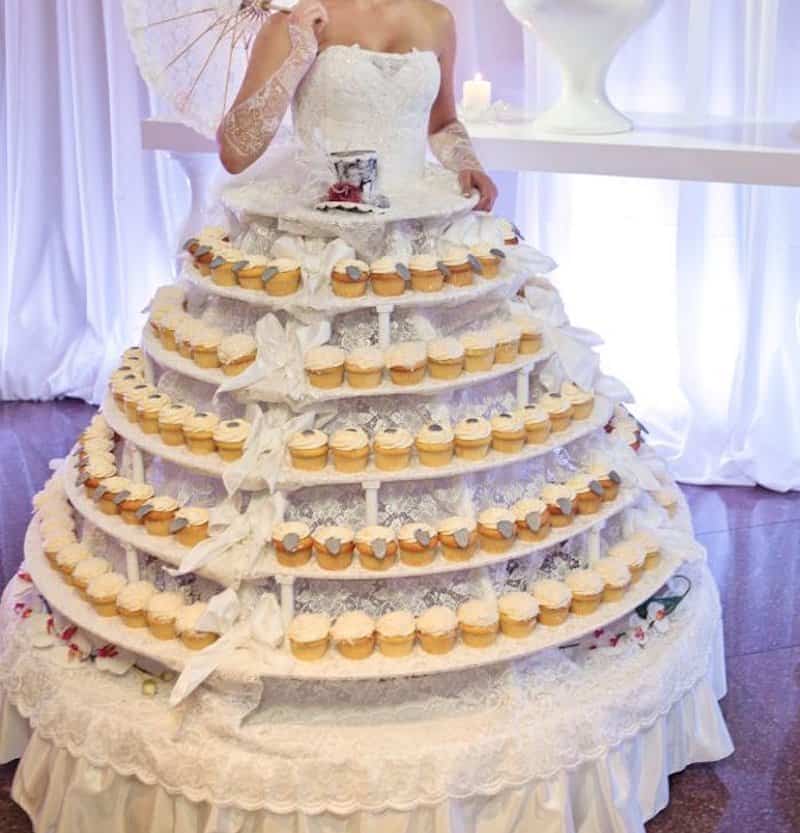 While the first dance at the reception must have been awkward, this dress can perfectly pass for the cake. As long as they aren’t dropped, these cupcakes must be edible.

Anyone Else Thinking Ursula? 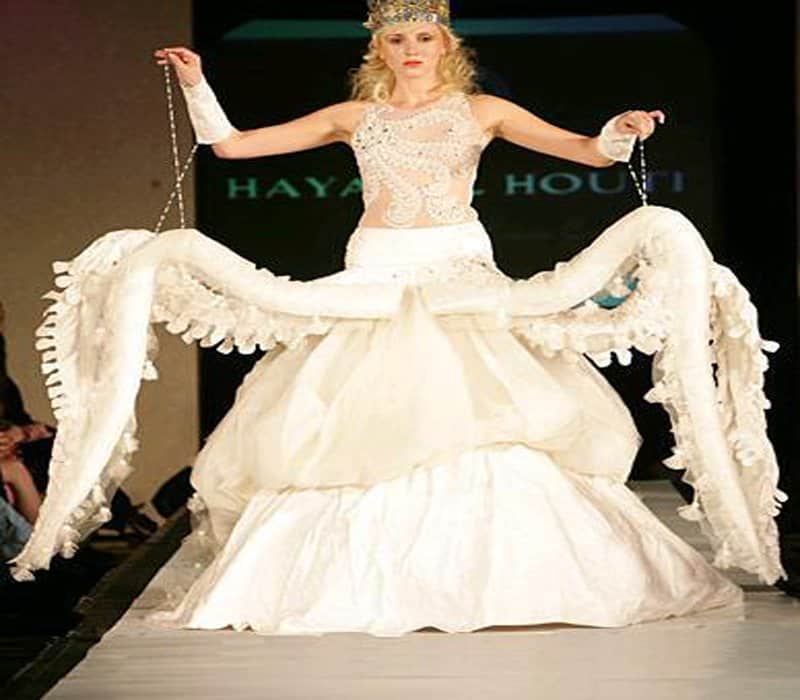 It’s difficult to look at this dress and not think of Ursula from Disney’s The Little Mermaid. She is missing 4 legs, however, to be a true octopus. Having parts of her dress attached to her arms would get really annoying, too. 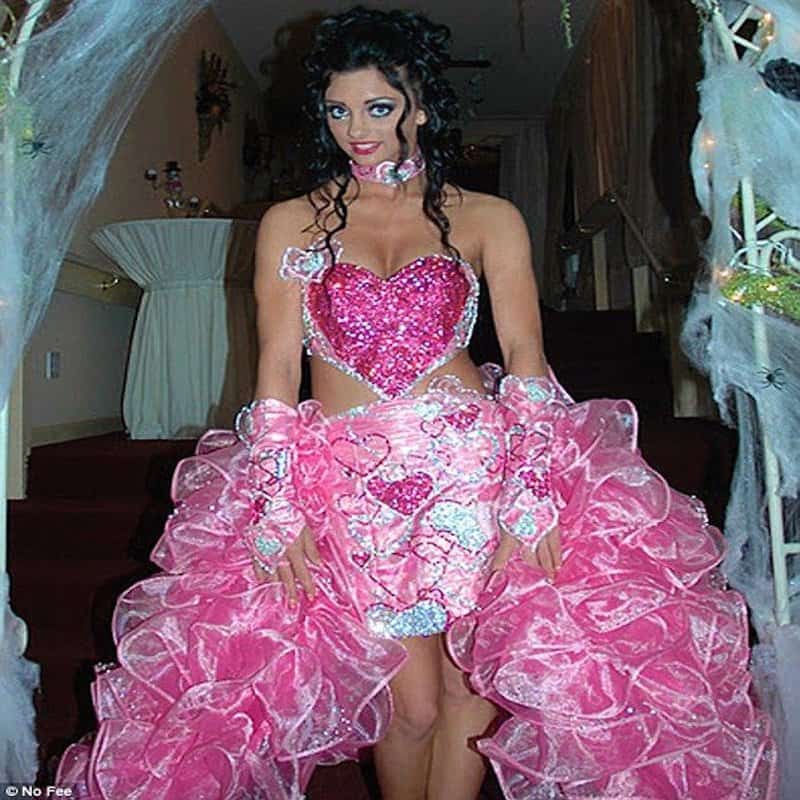 Hearts = Love. So she loves her groom! Gypsies are known for their over the top weddings and this dress is no exception.

What Are These Ladies Proud Of? 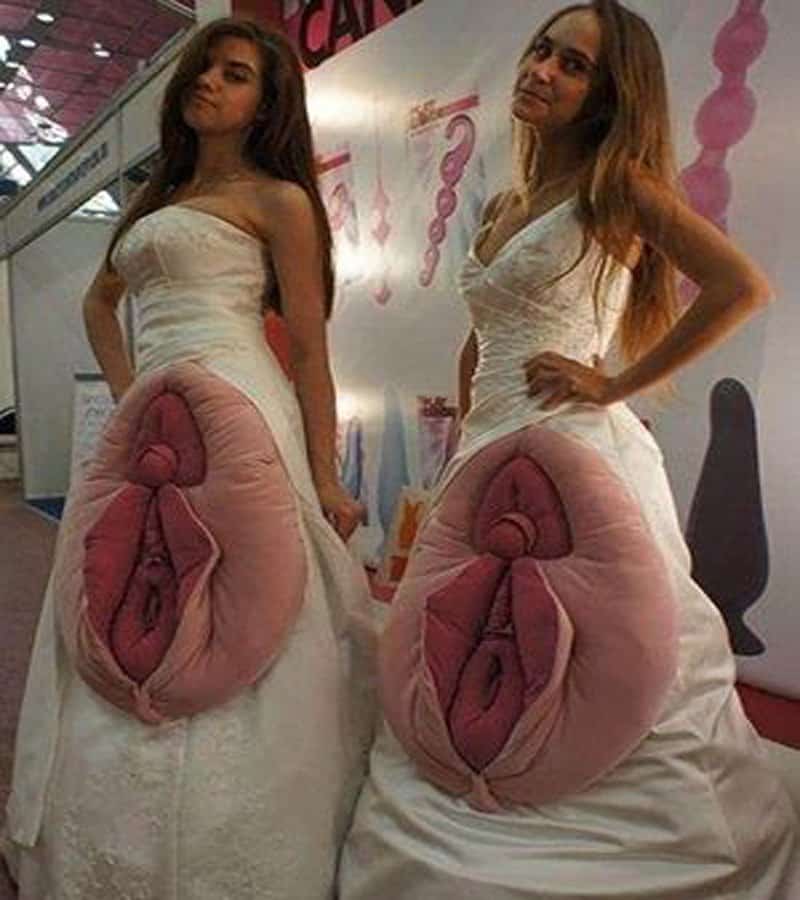 If you don’t know what those things on their dresses are, you need to go back to sex ed. These women are very happy to show their female pride on their big day. 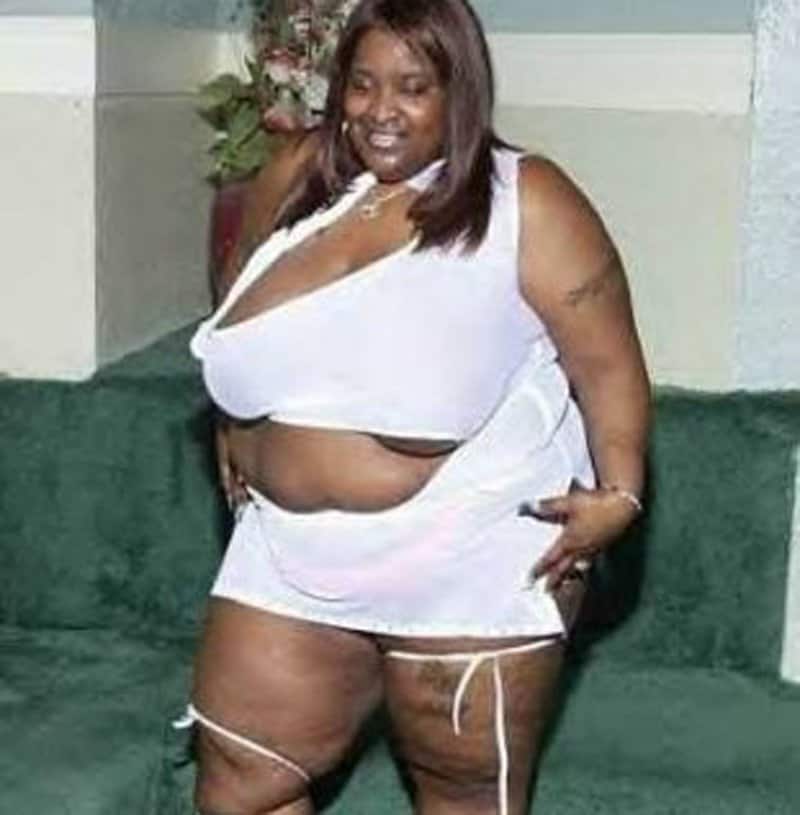 What is worse: that this woman is clearly only wearing like 2 or 3 scraps of fabric on her wedding day or that she is clearly posing in a church wearing such a skimpy outfit? 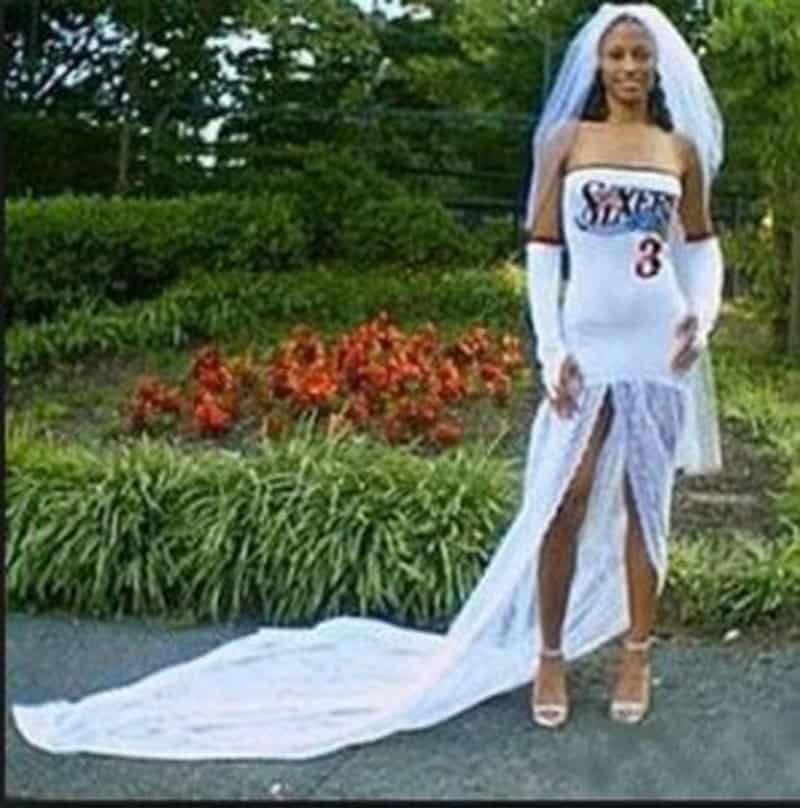 Some people strongly identify with their favorite sports teams. This bride wanted to leave no doubt as to her favorite on her big day.

She Sseems To Have Everything Important Covered 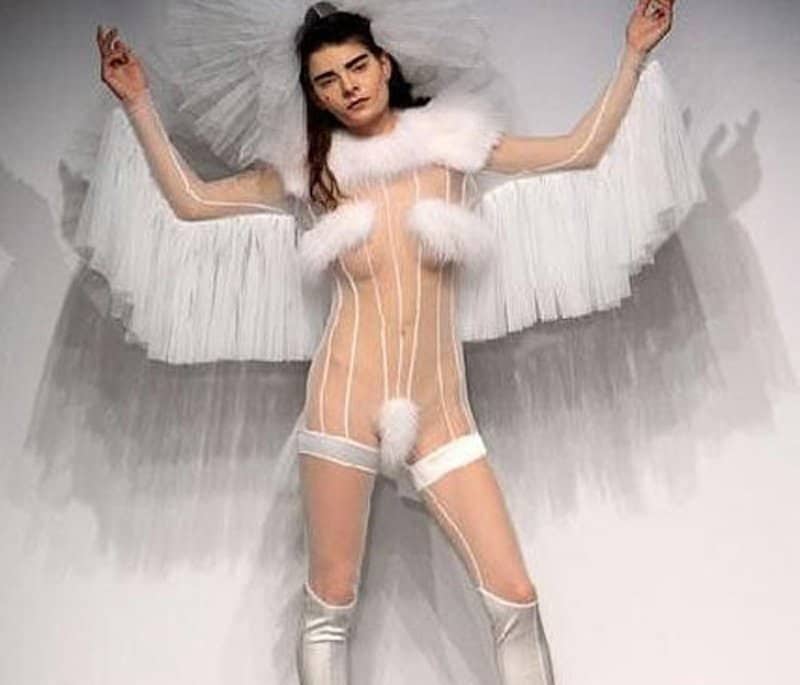 She was apparently embarrassed by her calves and her shoulders, as they the only major body parts she has covered.

No Pins Or Needles Allowed At The Reception 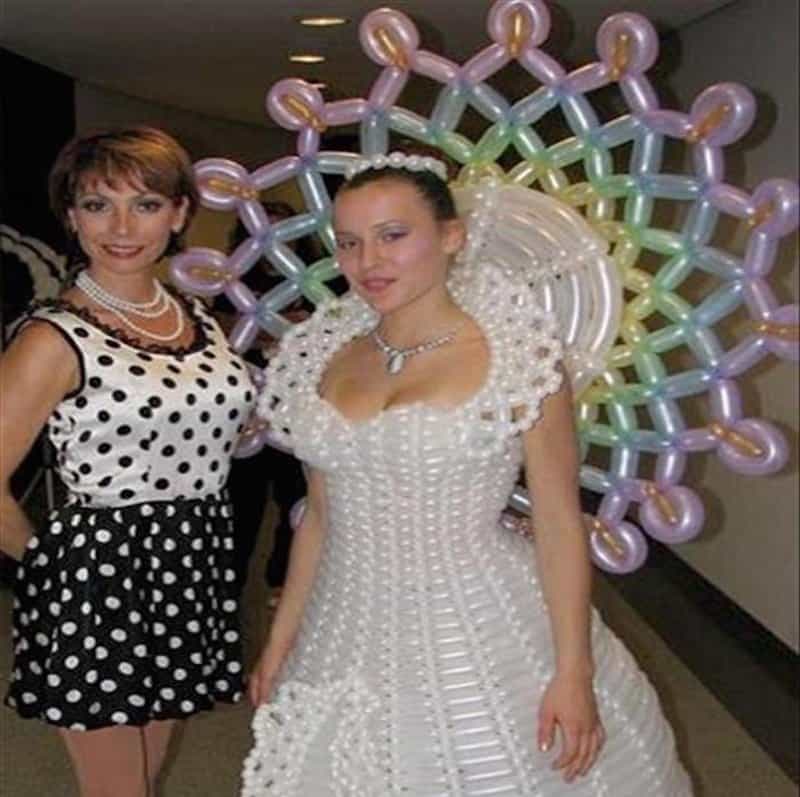 It definitely took some skill to make that dress. A dress made out of balloons, though? Pretty to look at as well as pretty strange.

One Wardrobe Malfunction Away 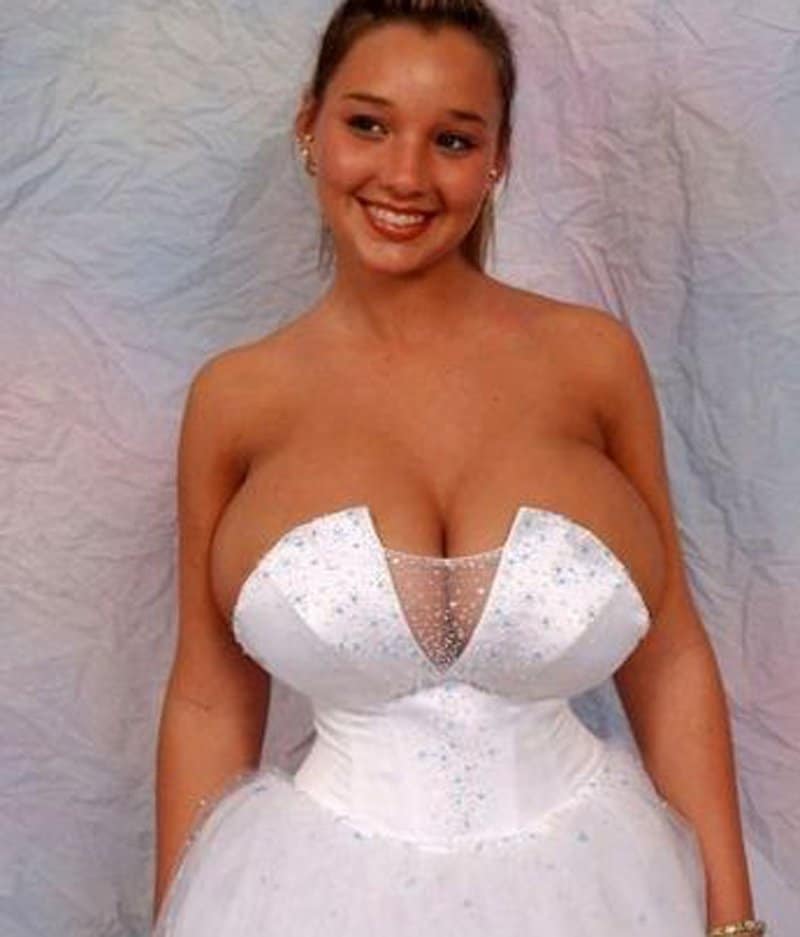 How is her dress staying in place for this picture much less for a whole wedding and reception? 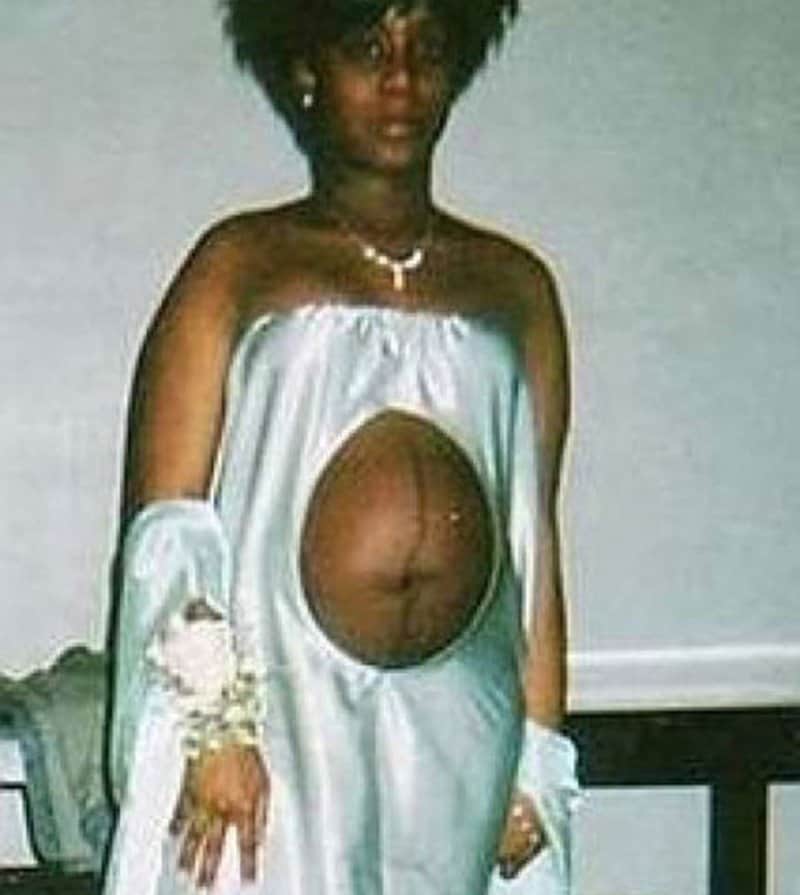 This bride wanted to remind everyone of the hell she went through in her recent c-section or the hell she will go through when she gives birth. It could be a scar, it could be a linea nigra (a normal line that appears on many women’s bellies during pregnancy), but either way, this dress is strange.