15 Of The Coolest Art Installations You Will Ever See

It is true that art can be depicted in a number of different ways, and what one person sees in a piece of art is often different than what someone else sees. The great thing is that it allows you to create your own story, to draw your own conclusions and to put your own meaning to it. Art often depicts life and when you have a life filled with ups and downs and everything in between, the work that results from that can be truly mind blowing. Here are 15 impressive art installations that will stretch your imagination. 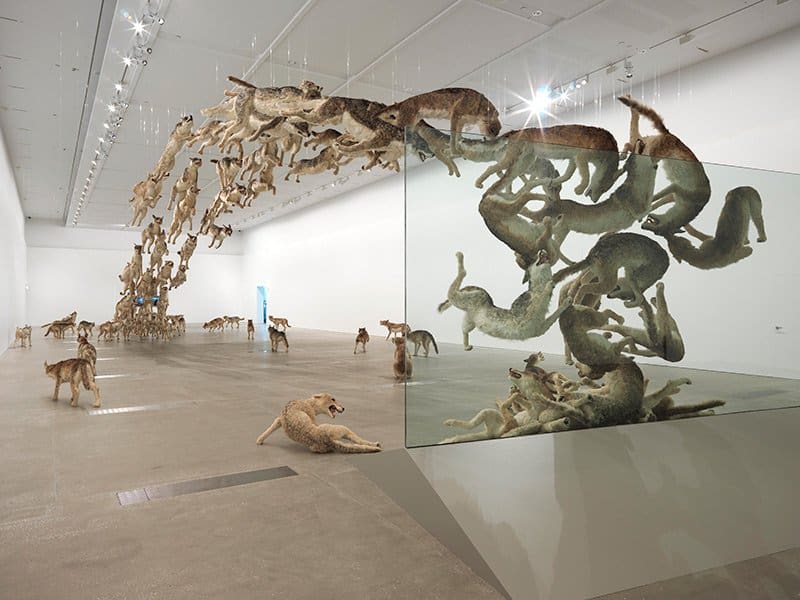 In 2006, Cai Guo-Qiang’s dramatic installation featured 99 life-sized stuffed wolves inside a glass wall. The artist was inspired by Berlin and its history, but according to Cai he really wanted to “portray the universal human tragedy resulting from this blind urge to press forward, the way we try to attain our goals without compromise.” 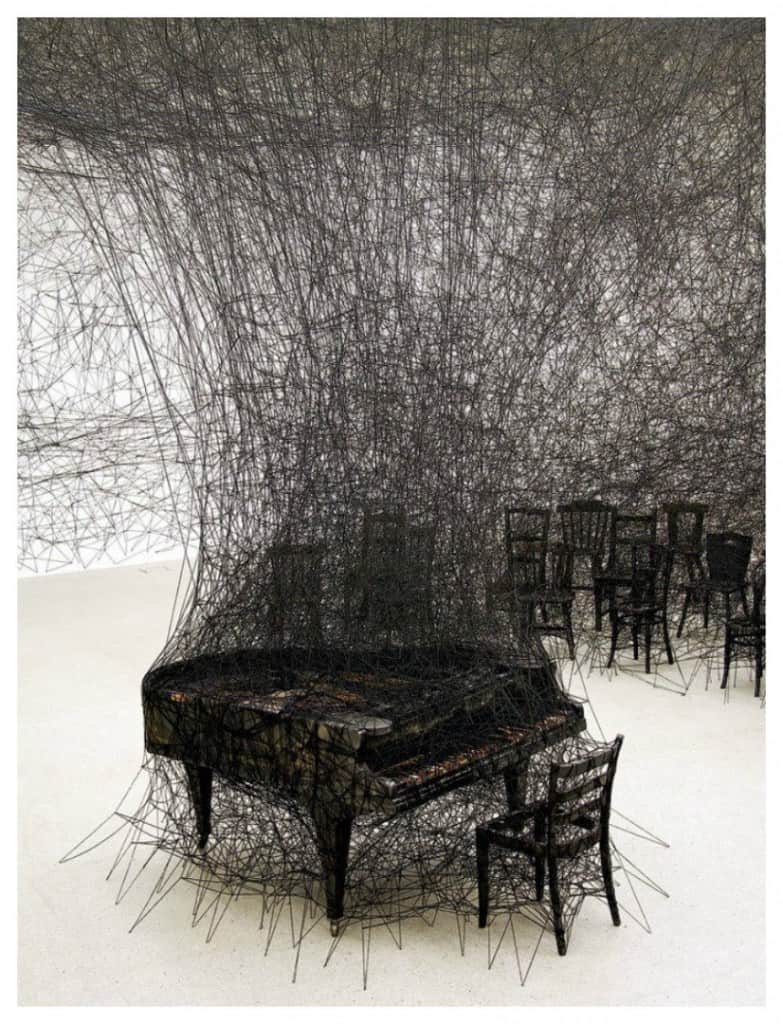 Chiharu’s exhibition in 2008 was meant to evoke the artist’s own personal childhood traumas. The installation featured a dense web of black thread encasing old chairs and a burnt piano. 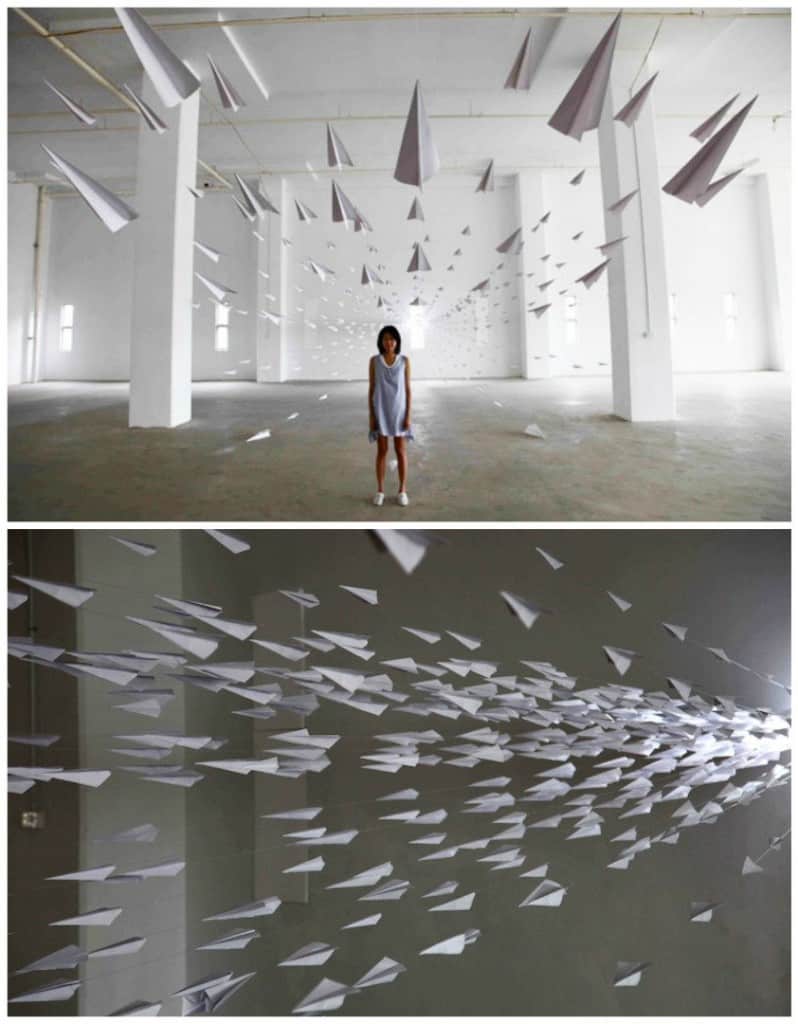 This incredible art installation involves thousands of paper planes bursting through a small window, and into a massive indoor exhibition space.

The installation is meant to represent the artist’s feeling of homesickness, and the planes symbolize a wave of emotion rushing in all at once.

I See What You Mean – Lawrence Argent 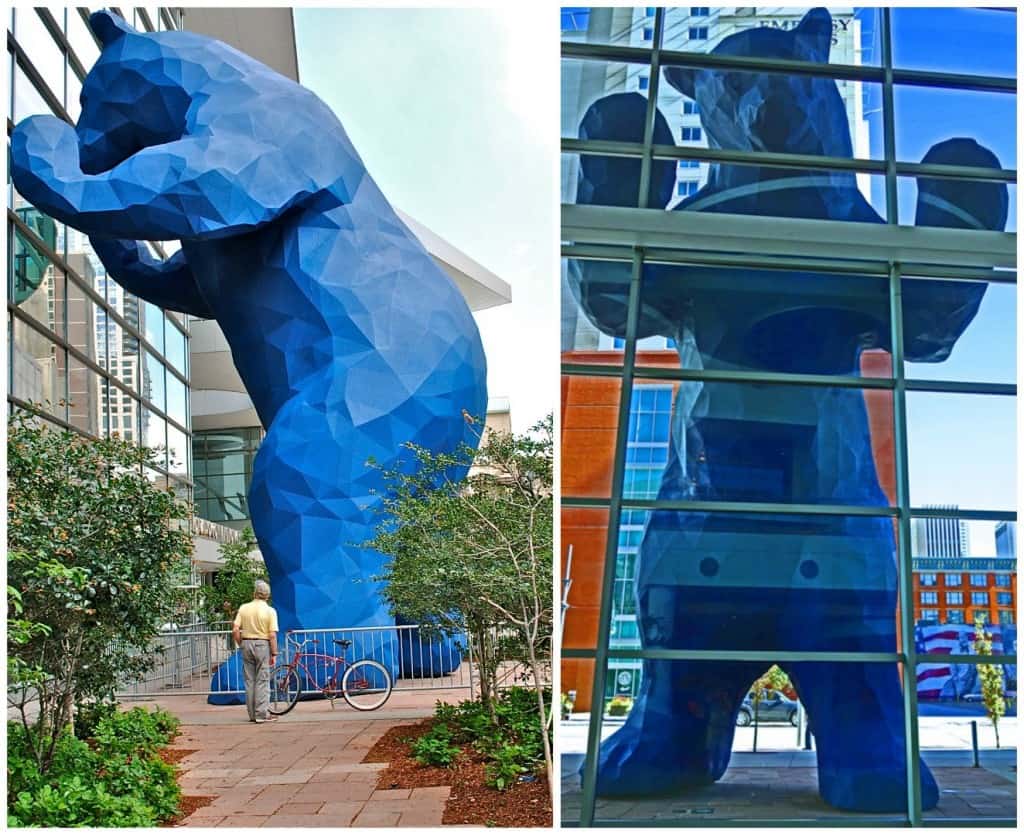 The Colorado Convention center probably has one of the most unique piece of art you will ever see – a big blue bear peering inside the center.

The 40-feet high bear was installed in 2005 by Lawrence Argent and the idea for the curious beer came from the artist’s own curiosity of what goes on inside the convention center.

“I’m always interested in what might be going on in there, the exchange of information, ideas and ideologies. But there’s never really any indication from the outside what’s going on inside.“

In 2012, Sicilian artist Giuseppe Licari showcased a variety of prickly tree roots hanging from the ceiling like organic chandeliers.

He titled the work ‘humus,’ which refers to the soil layer that is needed for the growth of trees. The installation was meant to portray the underbelly of a forest.

Fireflies On The Water – Yayoi Kusama 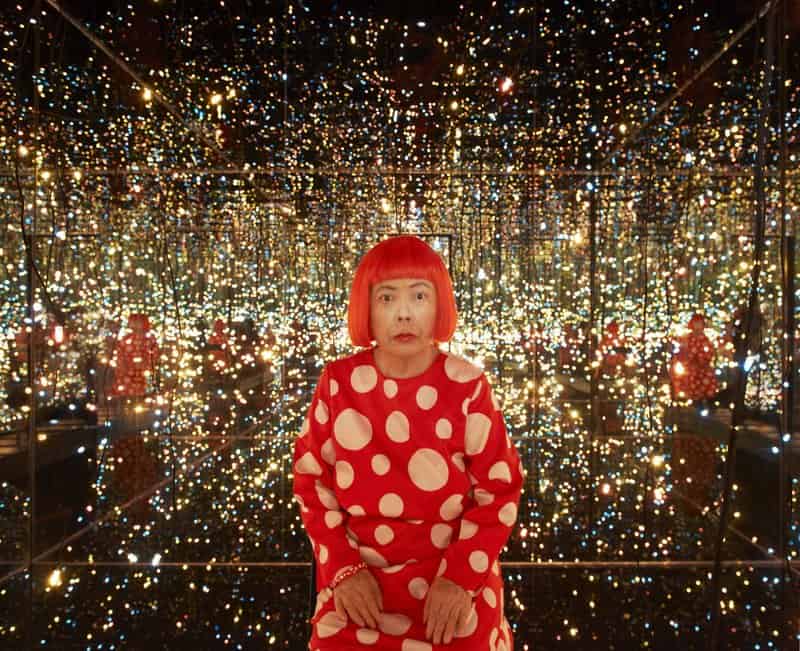 Aptly titled ‘fireflies on the water’, this beautiful art installation by Yayoi Kusama was created in a small, darkened room lined with mirrors on all sides. There was a pool of water in the center of the space along with a dock-like viewing platform. From the ceiling hung 150 small lights.

In tandem, all the components created a dazzling effect of direct and reflected light, emanating from all the mirrors and the water’s surface.

The work was displayed in 2002 and had to be viewed in solitude – one person at a time – as per the artist’s instructions. 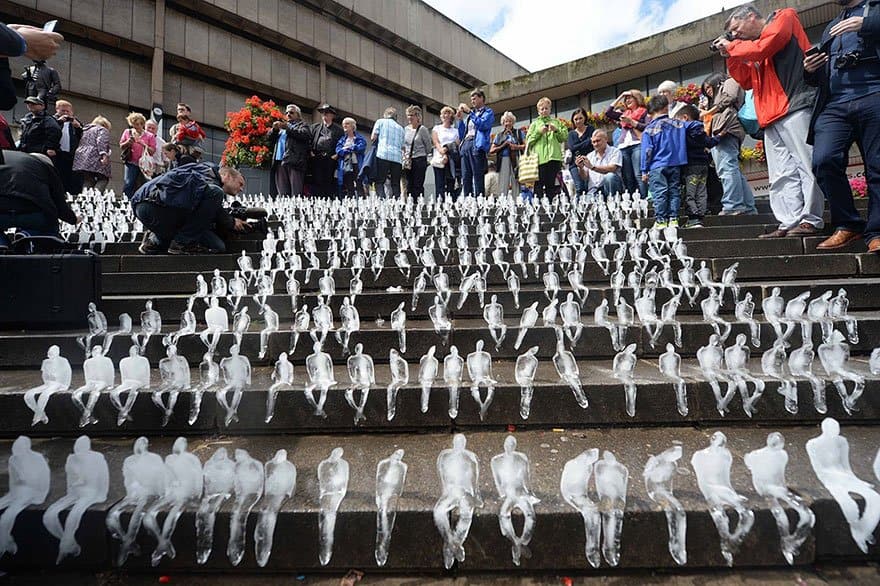 in 2009 artist Nele Azevedo, in collaboration with the World Wildlife Fund (WWF), showcased the ‘melting man’ in an effort to highlight the effects of global warming,

The artwork featured 1000 ice sculptures of men sitting on public steps in Berlin while literally melting away in the sun. The work spotlighted the WWF’s warning that the warming of the Arctic will change the weather in different parts of the world and will increase the release of greenhouse gases into the atmosphere. 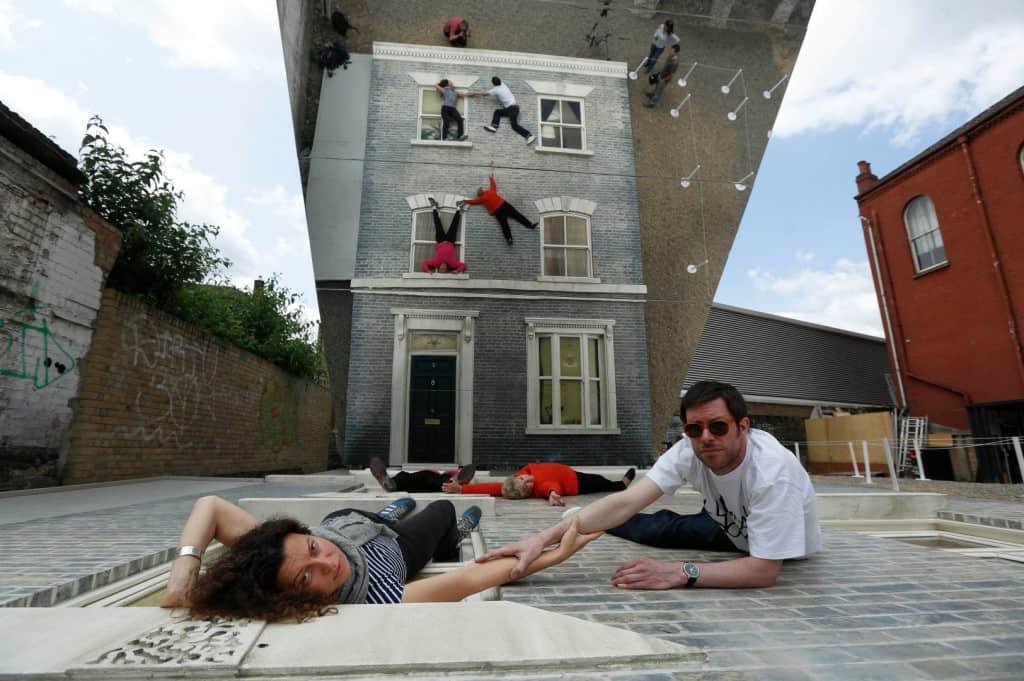 This fun and awesomely creative artwork looks like a house with men and woman hanging out of the windows and off its ledges thanks to their spider like reflexes.

In actuality however, the Victorian terraced house had a mirrored surface positioned overhead at a 45-degree angle, which created the illusion of people climbing walls like modern day superheros.

Controller Of The Universe – Damian Ortega

In 2007, Damian Ortega’s piece titled ‘controller of the universe’ featured a variety of free-floating tools suspended in mid-air.

The artist’s particular arrangement of tools were made to resemble objects propelled outwards from an invisible center into the surrounding space. 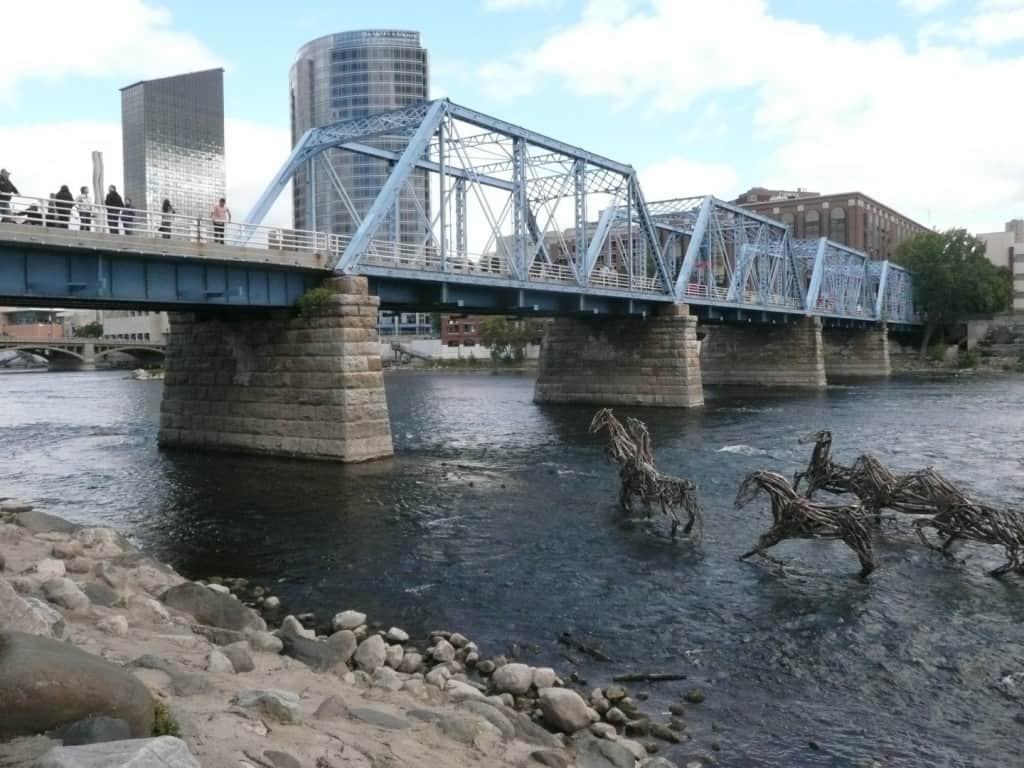 Artist Richard Morse used this visual representation of horses running through a river to symbolize the struggles and perseverance, along with the grace and powerful attitude that everybody needs in difficult situations.

Allowing his own life to depict his art, after battling stage-4 cancer, the artist used fallen branches to illustrate the struggle that horse’s must face, as they step into the unknown, under the water’s surface.

Caught In The Wind – Paul Cocksedge 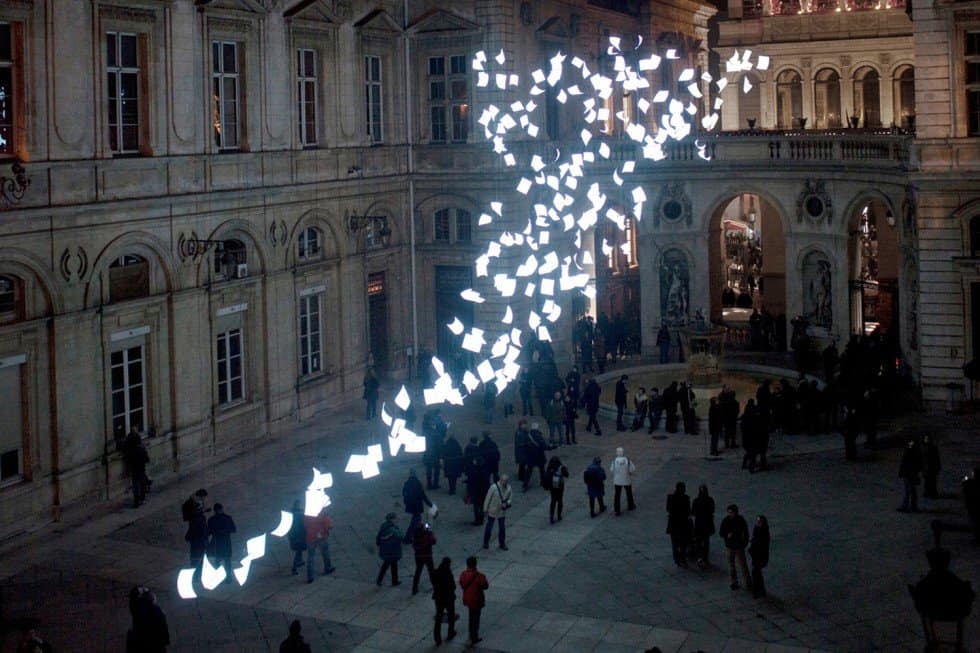 In 2011, London designer Paul Cocksedge created a beautiful piece of art resembling glowing pieces of paper soaring in the wind for the Festival of Lights in France.

It was Installed in the courtyard of Hotel de Ville, the 25-metre-long Bourrasque sculpture, comprised of 200 sheets of paper made from an electrically conductive material that lights up when current passes through it. 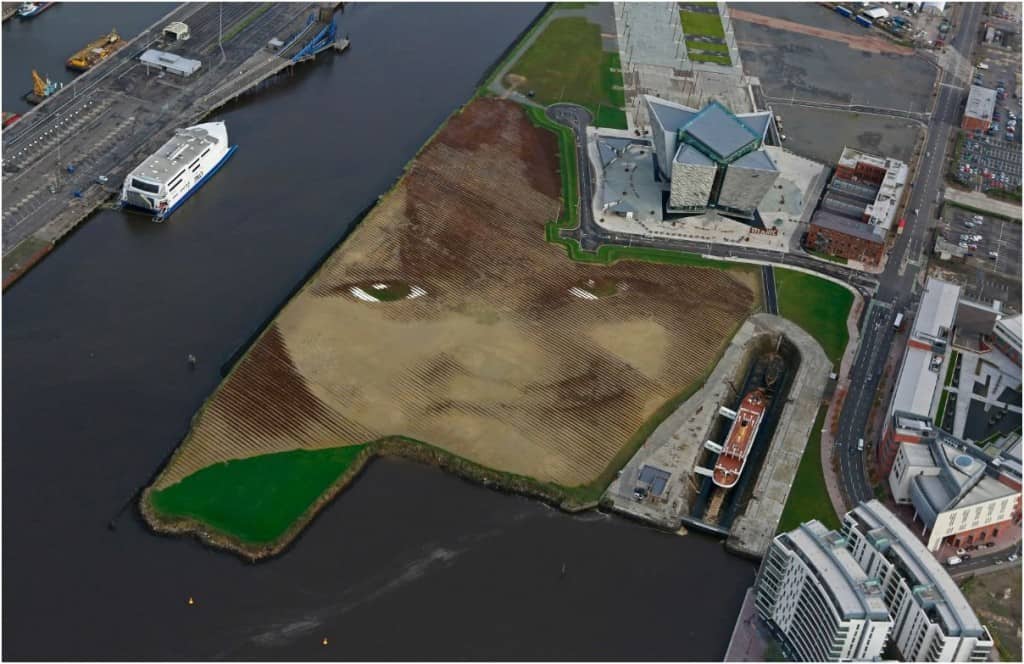 This piece created by Jorge Rodriguez-Gerada is one of the largest land art portraits ever made in the United Kingdom. Titled ‘Wish,’ the artist used 30,000 wooden pegs, 2,000 tons of soil and 2,000 tons of sand to depict this stunning image which he says “represents the hopes, dreams and wishes of a Belfast child.“ 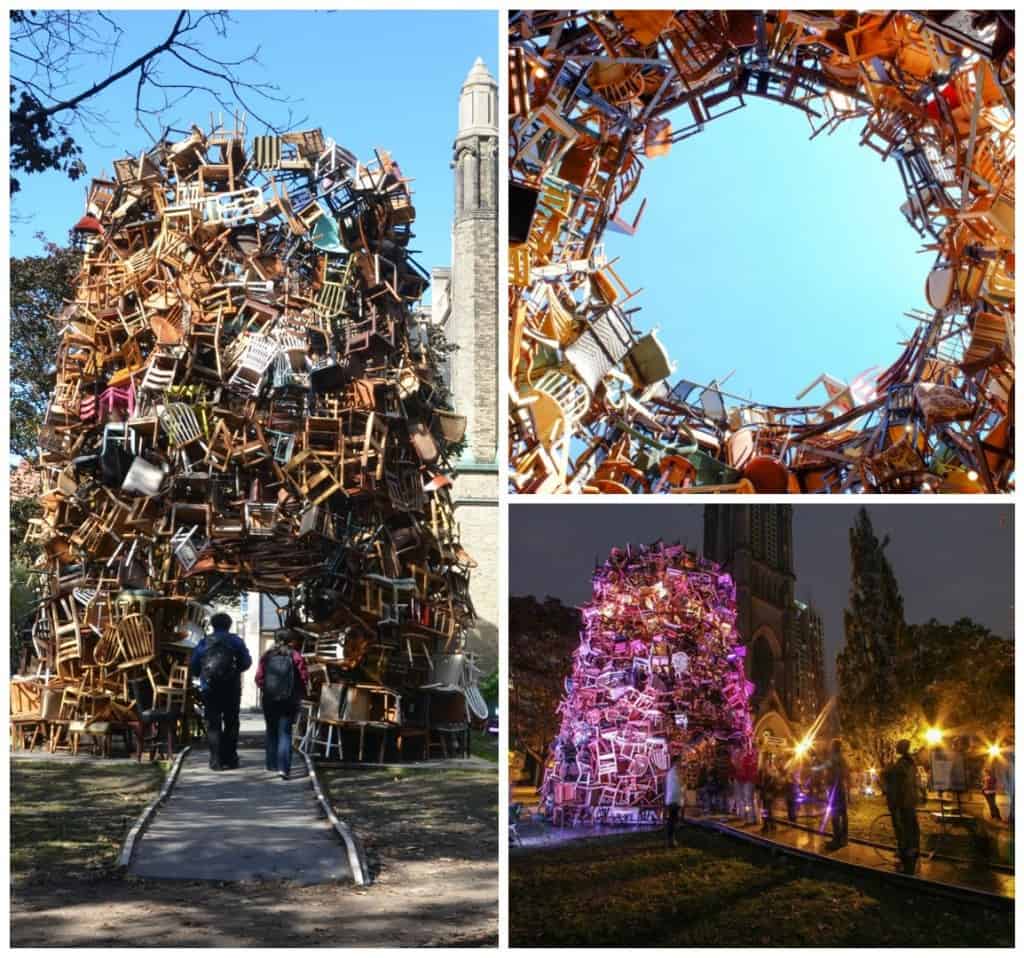 The chaotic arrangement of hundreds of wooden chairs, benches and garden furniture were stacked on top of each other to form an amphitheater.

According to Tadashi “viewers are meant to ponder how art made up of inanimate objects can call up memories and traces of people who once used them.” 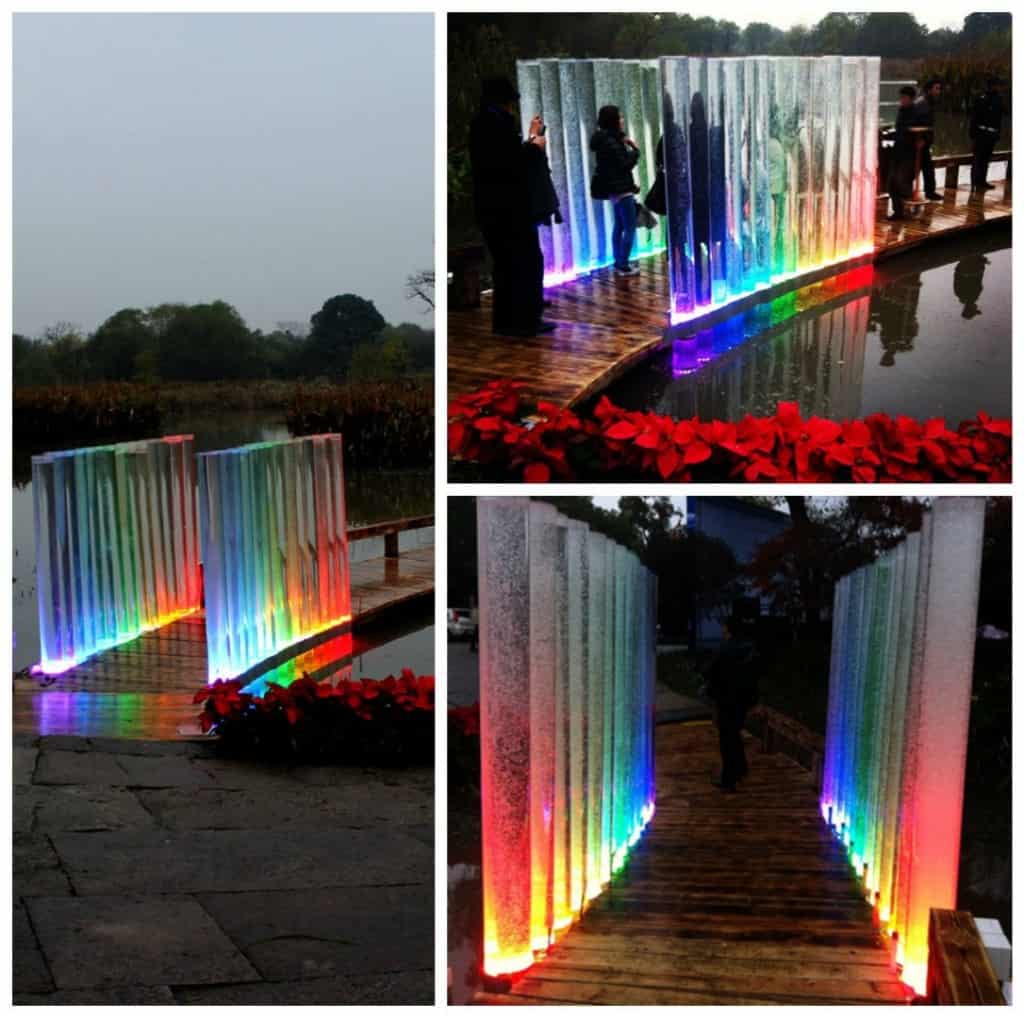 This piece by Anaisa Franco was built on a bridge at the Hangzhou Xixi National Wetland Park in China. The installation is made up of 28 acrylic tubes, each filled with water, sensors, air pumps, and LED lights representing the seven main colors in the rainbow.

As visitors walk across the bridge, the water inside the iridescent tubes starts bubbling, creating a kind of ‘rainbow wave.’

The artist explains that the intent of this project’s was “to put some fantasy into visitors’ paths, promoting an experience of harmony between technology and nature.” 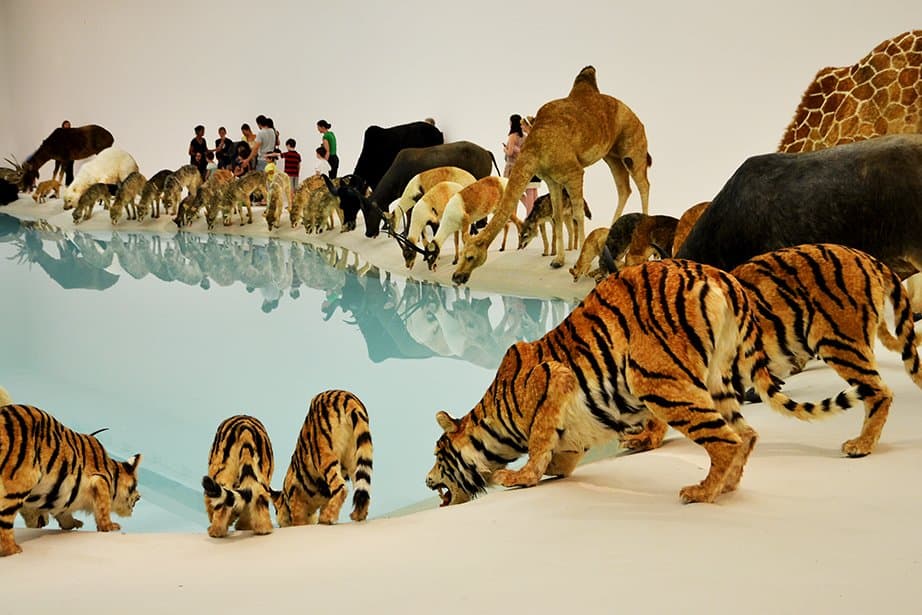 In 2013 Cai Guo Giang channeled his fascination with animals into an amazing piece of artwork titled ‘heritage,’ which was inspired by his trip to Australia in 2011.

The humongous installation used textures, colors, light and reflection to create what some deemed an ‘animal heaven.’

Heritage featured 99 replicas of animals from around the world simultaneously drinking from a lake surrounded by pristine white sands.